Late yesterday, Lokiboy (Dave) arrives at the motel looking like he has been having way too much fun. Covered in mud and dripping water, he tells us how his GPS sent him down a small country road that turned into a cow path. We wouldn't let him come into the room until he shed the boots and pants. 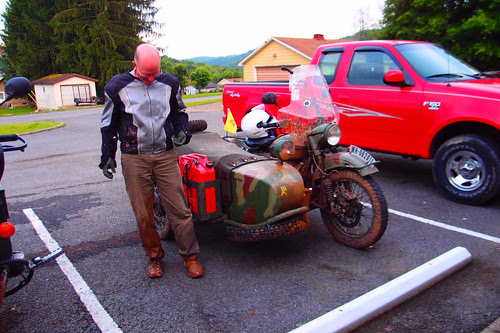 The next moring, we're up and loading the rigs, in rides a black Ural Retro. It's Terry Grogan (TerryG) from Philippi, WV. That's where we are heading today. Terry says he read in one of our blogs that we were staying in a motel in Grafton, WV. Well, there's only one motel in Grafton so he knew where to look. 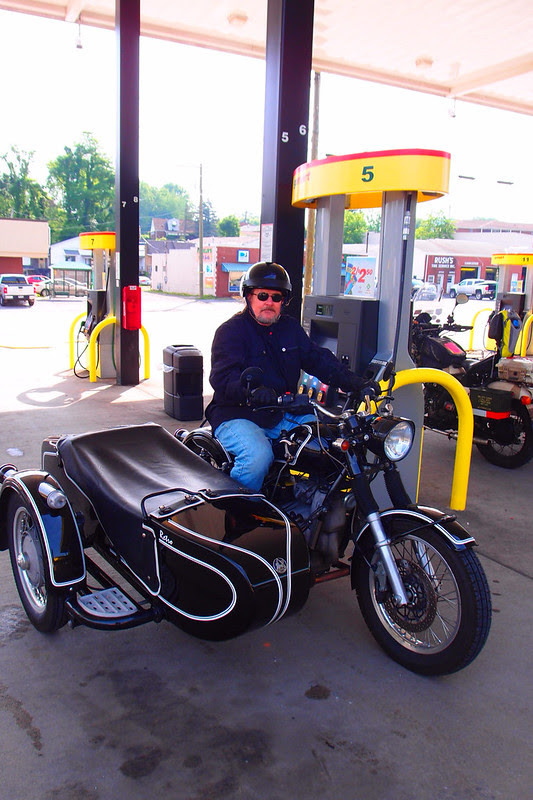 Terry on his 2011 Retro, clean and cool looking. Has authentic Russian taillights.

Terry leads us down to Philippi to see the covered bridge where the first LAND battle of the Civil War happened. Says he can see the bridge from his house. Terry is a retired computer programer - trouble shooter. 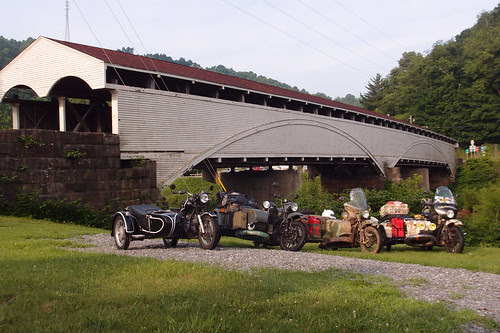 From here Terry took us to a local diner where the food was great, then he lead us back up to US 50 in Clarksburg. Leaving Terry to load his Ural with groceries to take back home, we jump on a boring four lane divided highway to Athens, Ohio and Ohio University. 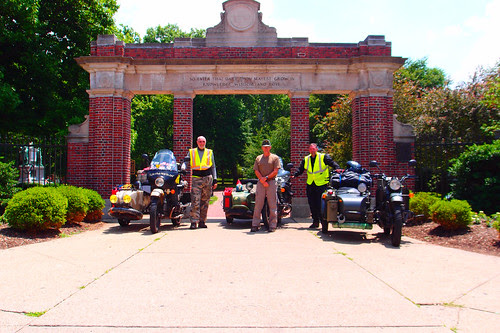 Once again, we drive our rigs up on the sidewalk at OU, blocking both vehicular and pedestrian traffic so we can get a photo in front of the campus gate at Ohio University, the oldest public university in the state... my alma mater, class of '67. A lot has changed here in the last 47 years, but there are still student hang-outs lining the streets across from the campus.

The effectiveness of the "Official" looking vests is not missed by the others, now Rudy wears one. We look like offical escorts for this dirty mud splattered woodlawn camo Ural rider, but he still can't come into the room until he cleans up.

Now here is a typical midwest sight from the 1890's until 1992. Once over 20,000 of these barns were scattered across the agricultural states east of the Mississipppi. Every year it is harder to find are these painted barns. Back in the day, Mail Pouch, Beechnut and Red Man Chew, hired painters to criss-cross the midwest, offering to paint farmer's barns if they could put advertisement on the end facing the road. Sometimes the farmer was paid $1 or $2 a year rent. It wasn't so much money that appealed to the farmers, it was a good coat of paint would protect the wood in the barn from rotting. Every so often the painters would return to refreshen the paint. 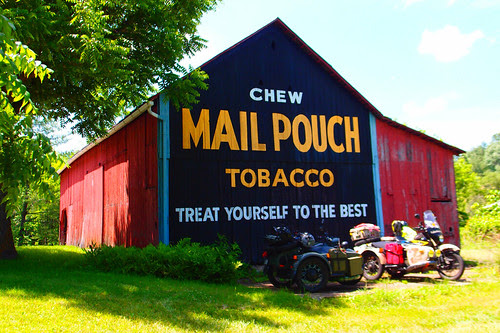 Chuck, the gnome, picked a perfect spot for his photo. He is such a ham. 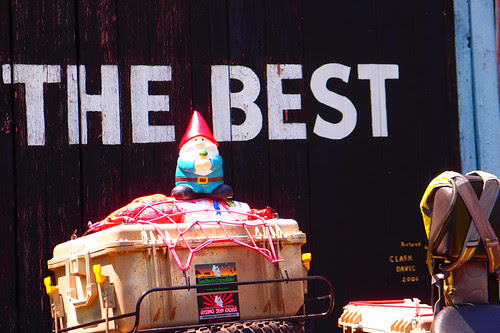 Together we rode an interesting Rt 56 to Circleville, where Rudy and Dave turned east for Washington Courthouse and I rode northwest to visit my 96 year old father.

Not five minutes after we separate, am following a small blue pickup truck when a Deputy Sheriff passes us going the opposite direction. He hits his brakes, turns around and turns on the red and blue lights. Oh, oh, guess the "Officlal" vest reputation has caught up to me. At a "Y" in the road, the truck in front of me goes right, I go left, the deputy sheriiff goes.... right, pulling over the truck. The vest still working it's magic.

By 8 pm, am with my father and younger sister Mary who is visiting from Florida.

Da'mit is covered for the night, tomorrow we try to fix a few small issues with GPS wiring.

Posted with Blogsy
Posted by CCjon at 6:49 AM