It rained hard last night so the Red River near Questa was flowing higher and fast today. Here is the result of todays photography work with flowing water. 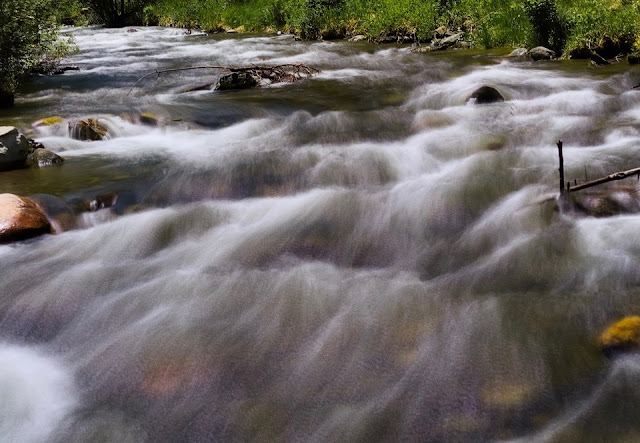 Moved a mile downstream, climbed down a steep river bank to get this shot. 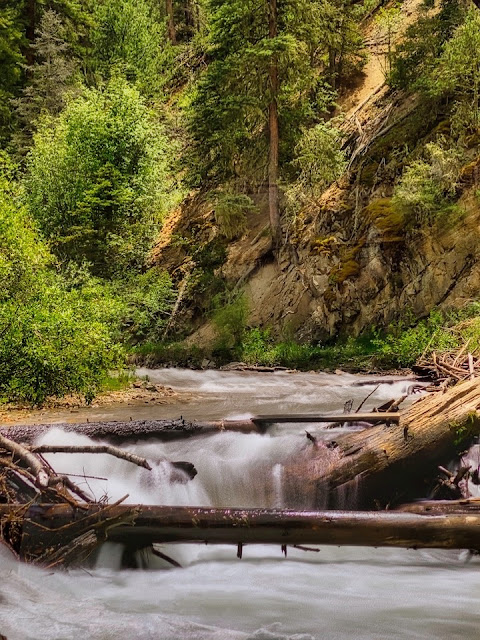 Went to another location, but by accident, took a double exposure.  Hmmm...
From that accident, created this moody 1800's looking
mountain image with a watercolor painting feel.

An accidental double clicking produced a more interesting image than the straight photo. 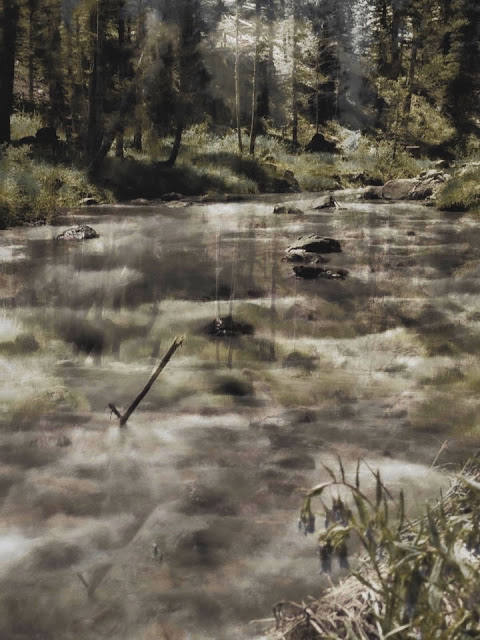 Everyday we learn something new when we keep experimenting,
be open to the unknown, pushing ourselves.
If given lemons, make lemonade!

Most of all, never stop learning and growing.

p.s. Last night the normal sunset was not much to look at,
but in the north were wonderful lights dancing around in the clouds. 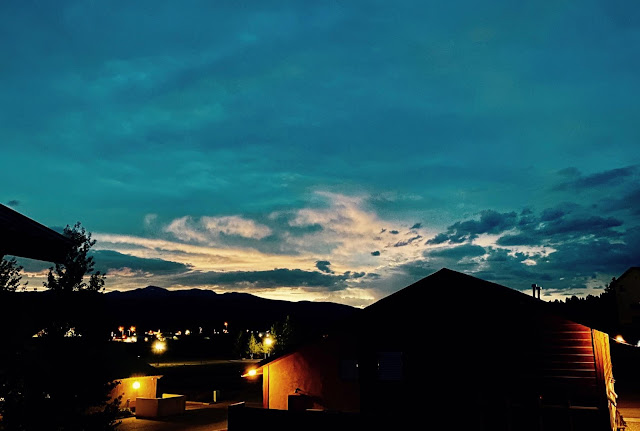 June found me spending some time in the southern Rockies in northern New Mexico, working on a photography project, learning new techniques and exploring a few new roads.

Love the peaceful aspen meadows in the afternoon light. 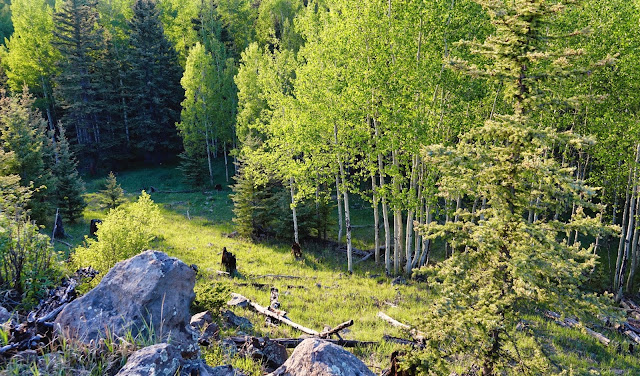 The elk come out to eat at dusk after sleeping all day. She looks pregnant and this is calfing season. Soon, Mama, soon... 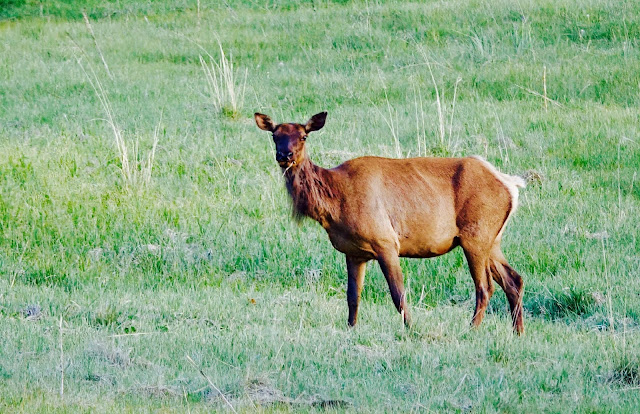 Rode down to Mora to revisit a rancher I met a few years ago, Don Patricio.
This is what a New Mexican native picket fence looks like 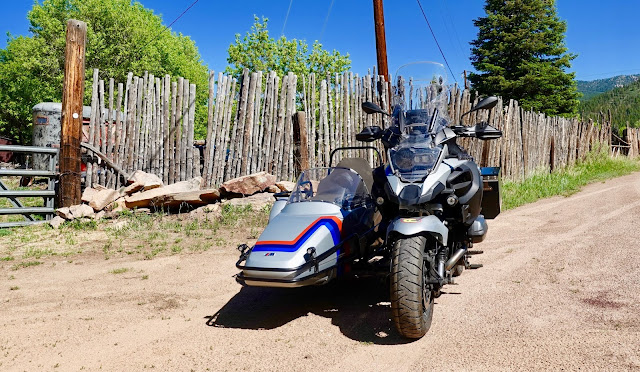 Stopped to talk with this roadside barber. He was combing one of his top donkeys. Suggested I not park downwind as he only does this "de-thatching" of their heavy winter coat on VERY windy days.  The field mice must love getting all this free donkey hair for their nesting material.

These are much larger donkeys than what I saw in Mexico. He said these were mammoth donkeys and would outlive him, even though they were already 20+ years old. Even had to designate who was to inherit them in their wills. 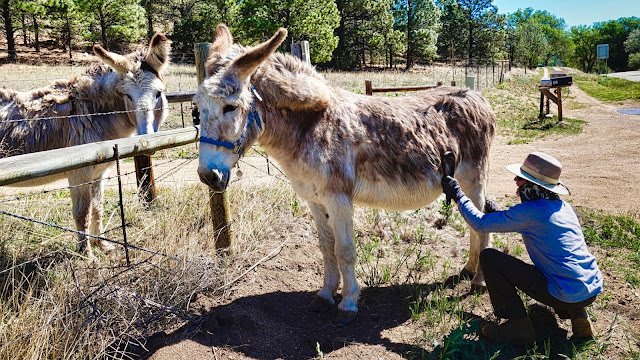 Near Mora, road construction stopped everybody in the hot sun. Lucky me, got the last piece of shade to wait in. 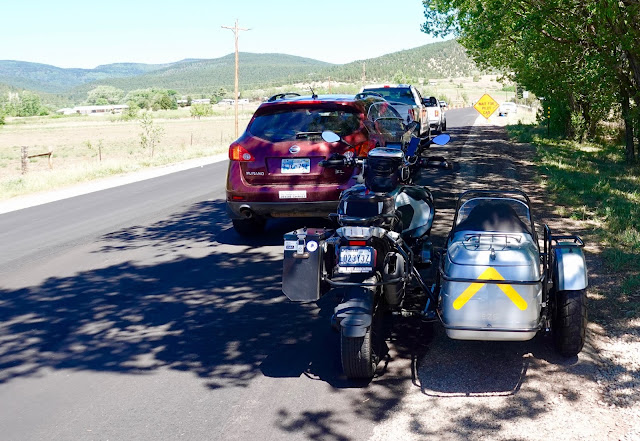 The next day rode thru Red River on way to the Rio Grande del Norte National Monument.
Looking at down Main street Red River, a tourist destination summer and winter.

Doesn't look like much, as the gorge ahead drops off into a significant site. This is where the Red River flows from the tallest mountain in New Mexico, Wheeler Peak, to join the cold Rio Grande river rolling down from the San Juan Mountains in southern Colorado. 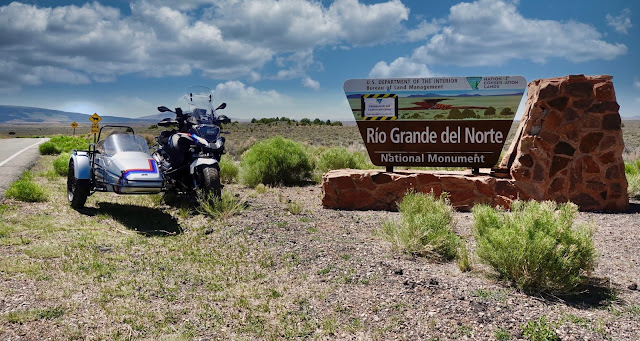 In the deepest and widest spot of the 1,885 mile long Rio Grande gorge is La Junta (Spanish for the joining). Red River on the left and the Rio Grande on the right meet at the tip of what looks like a green rocky tail of a dragon. 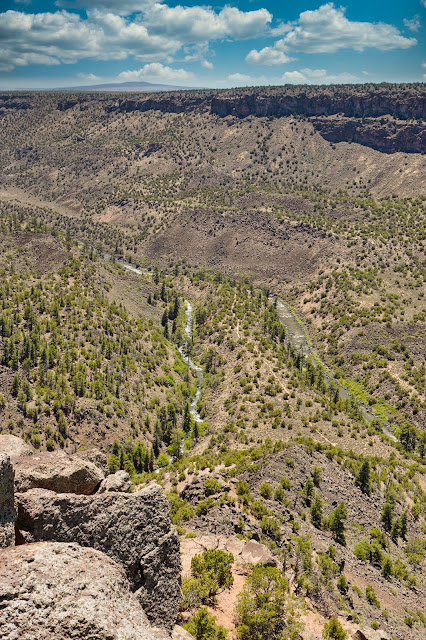 Being a Monday and with the corona shutdown, not many people out here. All camping sites were closed.  The only security ranger on duty said he was as lonely as the Maytag repairman.

Remember the New Mexican picket fence above? This home owner ran out of native pickets but managed to round up enough discarded abandoned skies to complete his fence. Hmmm, not many pairs of ski there either. 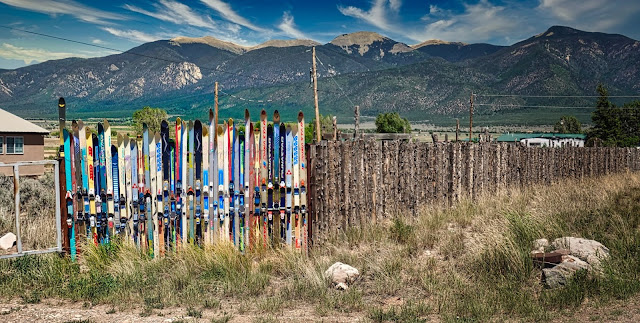 A few days later, tackled Route 17 between Chama, NM and Antonito, CO, with two mountains passes of over 10,000 ft elevation in between. This loop has several great riding sections: Chama to Antonito, Rt 64 Tierra Amarilla to Tres Piedras, and Taos to Eagle Nest to Questa, but not the shorter Rt 522 from Taos to Questa. 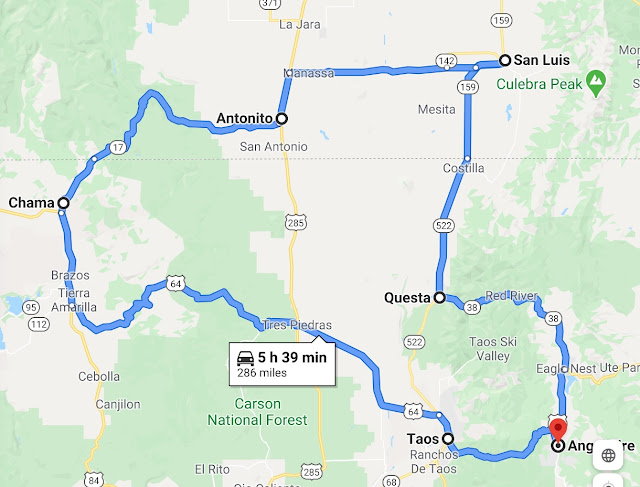 Again stopped by road construction, traffic is reduced to one way only following the pilot car. 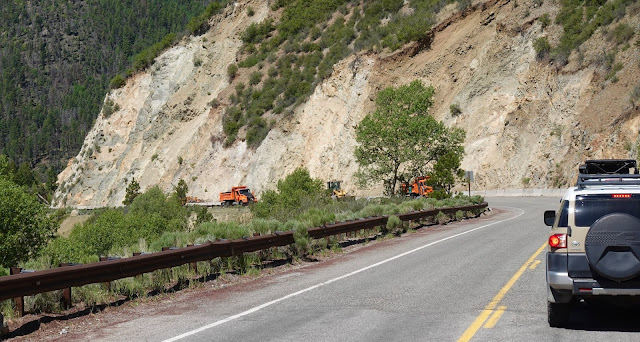 At Manga Pass, a mule deer photo bombed the shot. 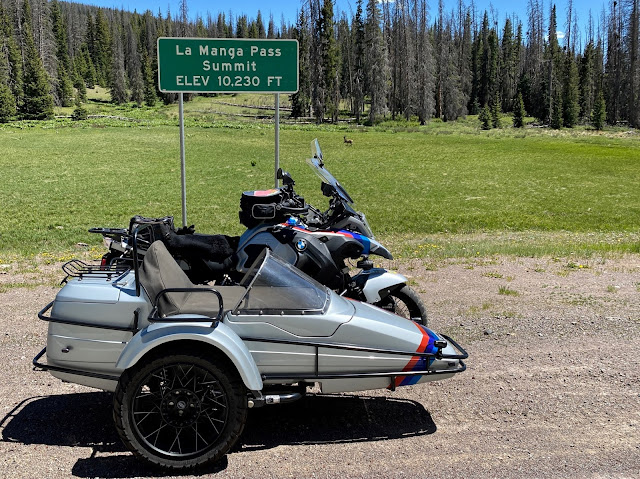 Cumbres Pass gives name to the Cumbres-Toltec Railroad that still runs today for tourists between Chama and Antonito with their antique coal powered (don't tell the evironmentalists) steam engines. 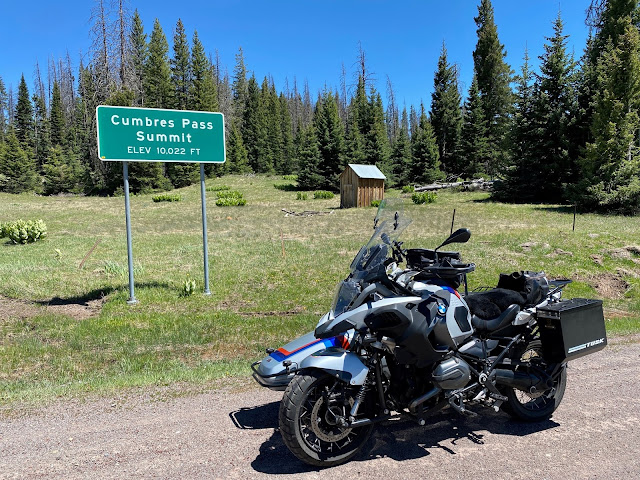 Stopped to click a photo of this hard working cowboy.
Be it cattle or sheep, the cowboy's life is hard and lonely. 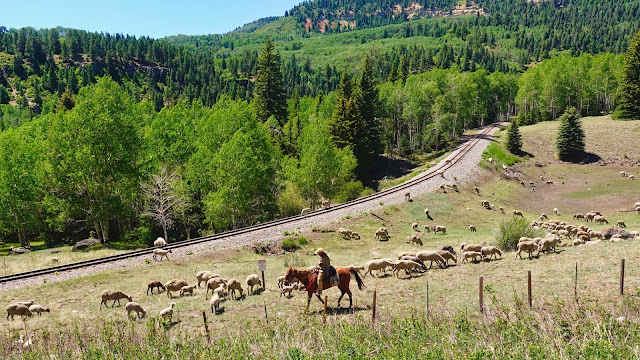 Toward dusk, the nighttime critters come out. Better to slow down and watch the road edges. If one deer crosses the road in front of you, cover the brakes and expect others to follow. 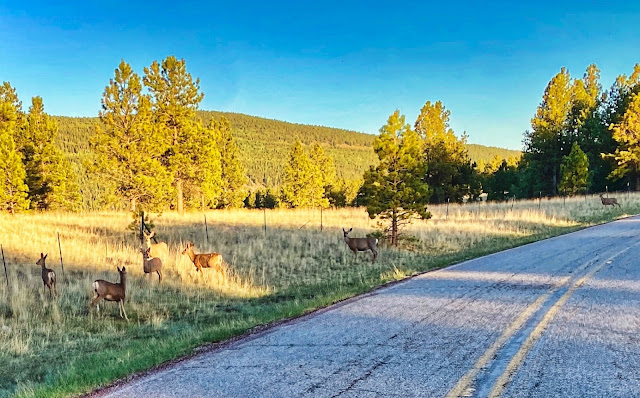 In case you thought this was a sidecar vacation, have also been working on several photography projects, learning new techniques.

For example, using slow shutter speed to capture moving water. The water is looking okay, but the leaves were fluttering in the wind so they also came out blurred, not okay. 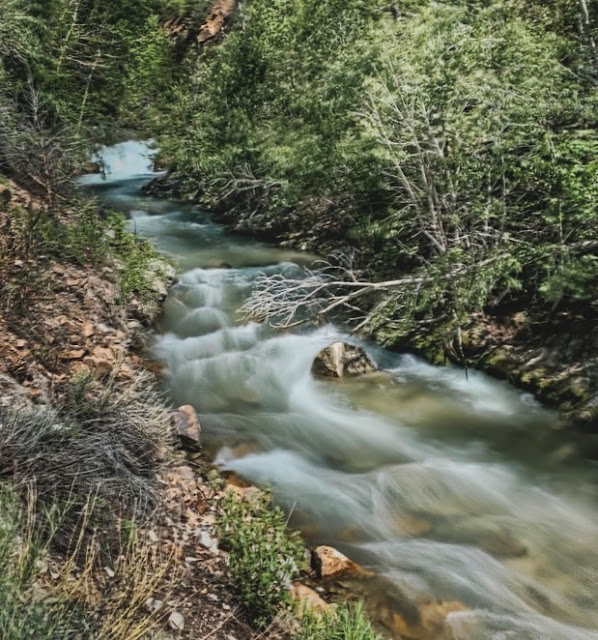 This shot is a little better. Lots of mountain streams around here with fast moving water
to practice with. 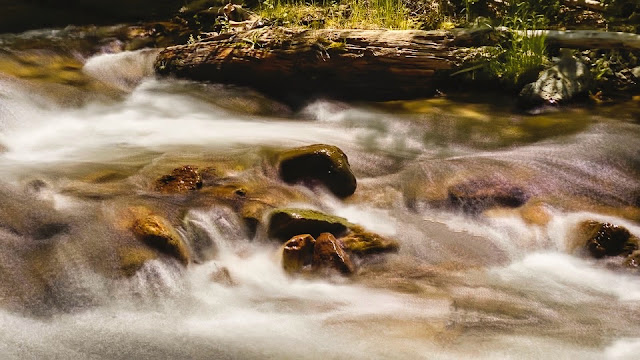 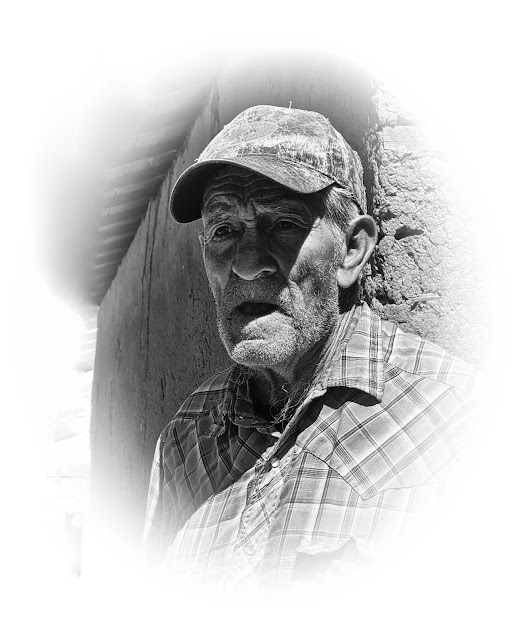 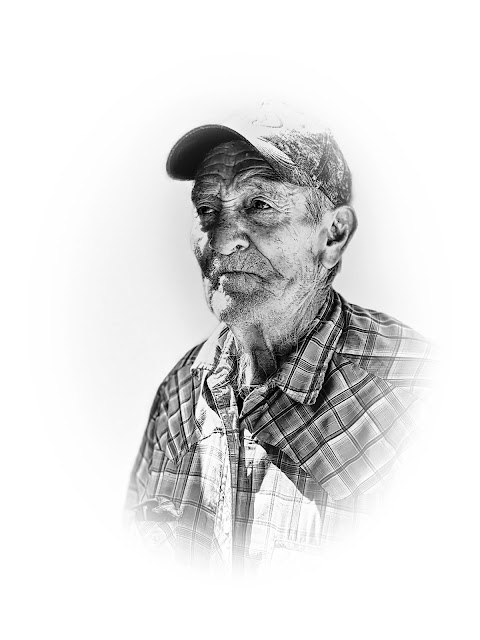 That's all for now.  Am here for another week, so more riding and practicing of photo techniques.

Ride safe and sanitize my friends.

Am self-teaching this week, watching various instructional photo editing videos,
then experimenting on which approach makes for a stronger image:
Color    or    Black & White.

Tell me what you think. 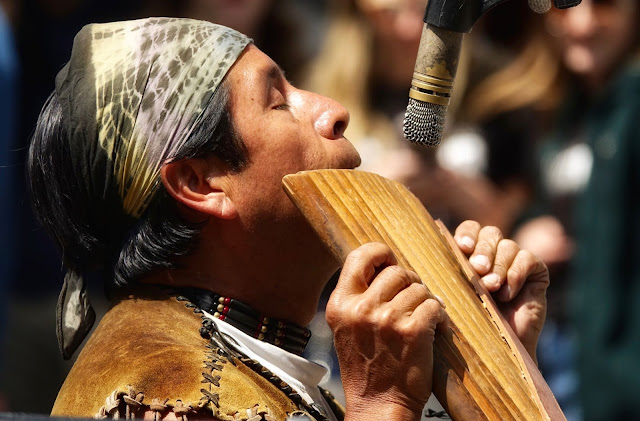 Flipped the image and reworked in B&W 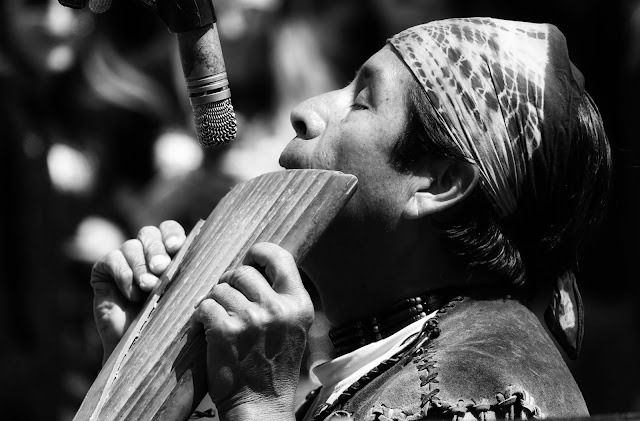 Is interesting to note the viewer's points of focus shift from what they see in the color image to something different in the B&W image. 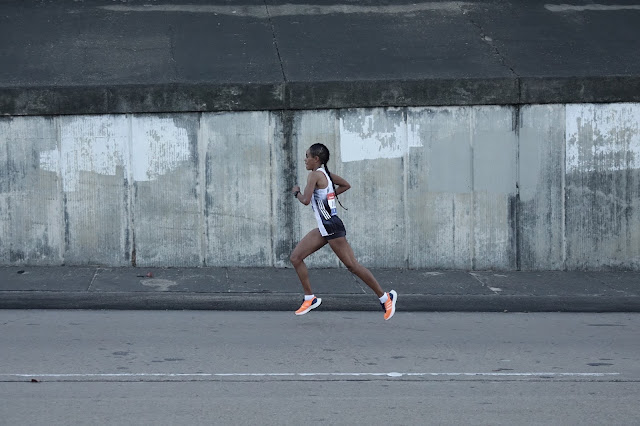 The bright shoes contrast with the dull grey walls of the underpass.
A person commented on the dark stripe/wall, it appears she is running into... 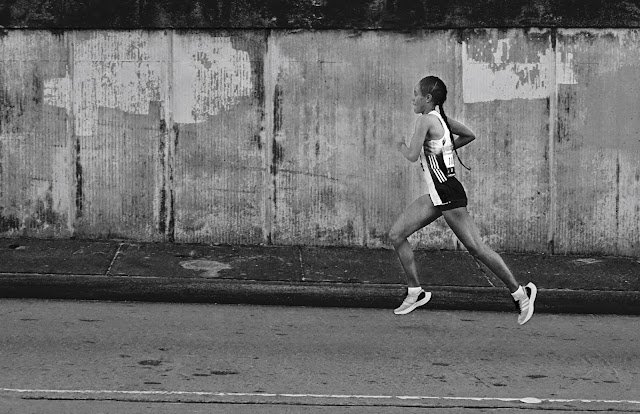 B&W image. the dark wall is removed along with the bright shoes. Now the focus is more on the runner and not the shoes.

Solar Voyager is a B&W image previously displayed here, but not the original color print. 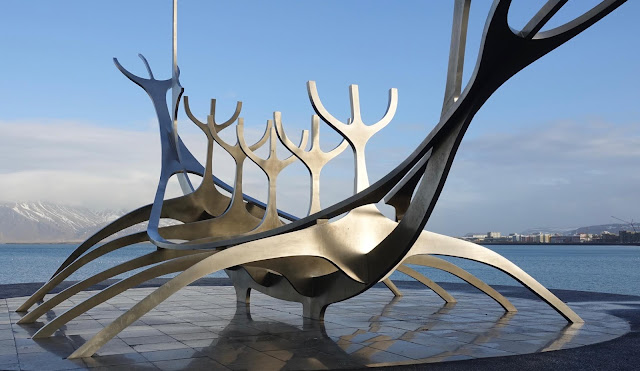 Stripped of color, the sky and background recede, the focus shifts
to the various shades of grey standing figures. 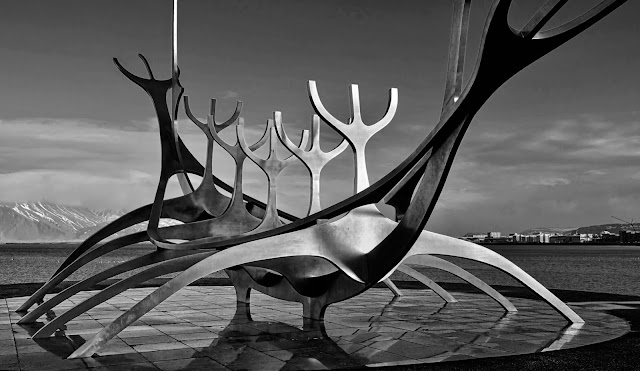 Lost the original color shot, but here is the finished B&W landscape image. There are three photographers standing close to the base of falls which gives you some idea
of the fall's scale.

Not standing too close as the mist was freezing cold, quickly spotting the camera's lens.
The fall's mist and spray created the spidery web of ice on the black rocks. 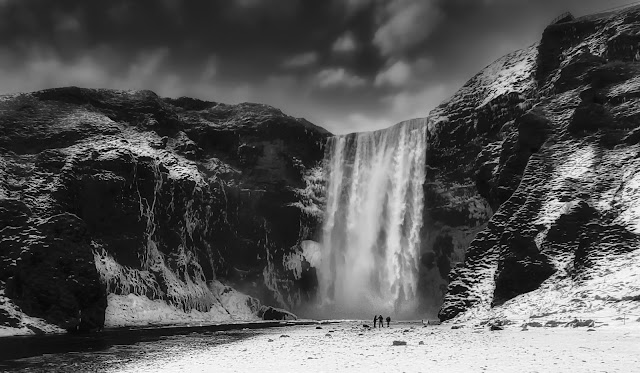 Working in B&W has its own set of challenges. Some original images easily convert to B&W, actually improving their impact for the viewer. Yet other color images do not convert well,
even with a lot of editing.

Deciding which approach to use is the photographer's / artist's choice and challenge.

Will continue my studies here in New Mexico for another week before returning to Texas.

In case you think I have no time for play, I did bring the BMW sidecar rig with me.