Sidecars in the Smokies, North Carolina

The month of April found us going in circles on the backroads of North Carolina trying to find the Iron Horse Motorcycle Campgrounds. Today was the first day of the 10thannual Sidecars in the Smokies Rally and we did not want to be late. 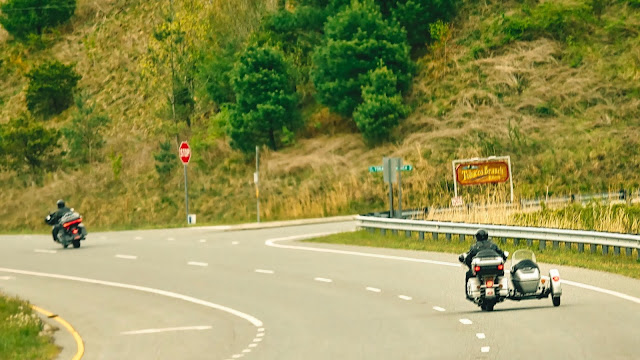 Arriving late Thursday, the weather was nippy, even frosty.

But Friday morning we awoke to warmer temperatures and a promise of sunny riding weather. A group ride was organized for a lunch run to the The Bistro at the Everett Hotel in Bryson City.

Bryson City is a small town in North Carolina, also known as the gateway to Great Smoky Mountains National Park, with its wildflowers, streams and winding roads. 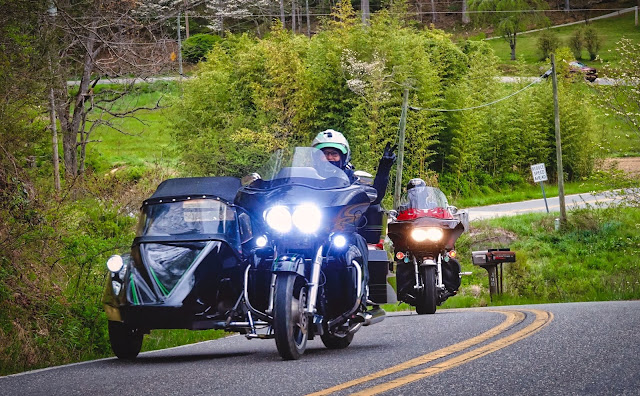 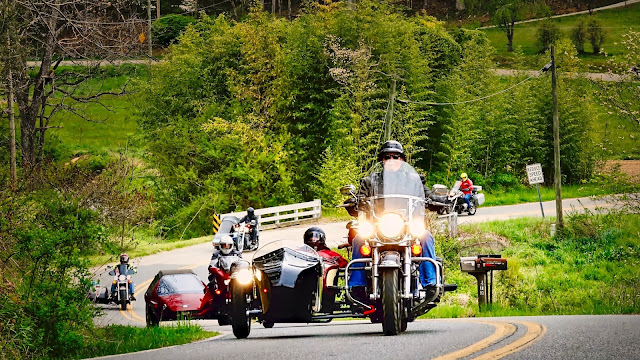 Dan Ingle on his BMW/Freedom sidecar rig. Dan also has a MiniMate camper like what is mounted on my Rocket/Sidecamper, but he pulls his as a trailer. 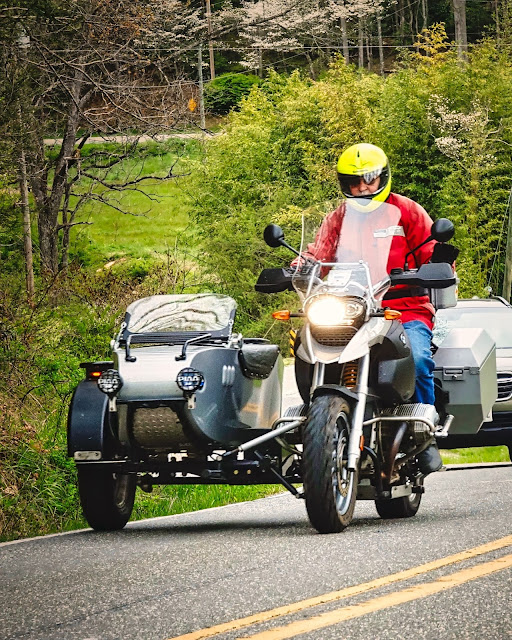 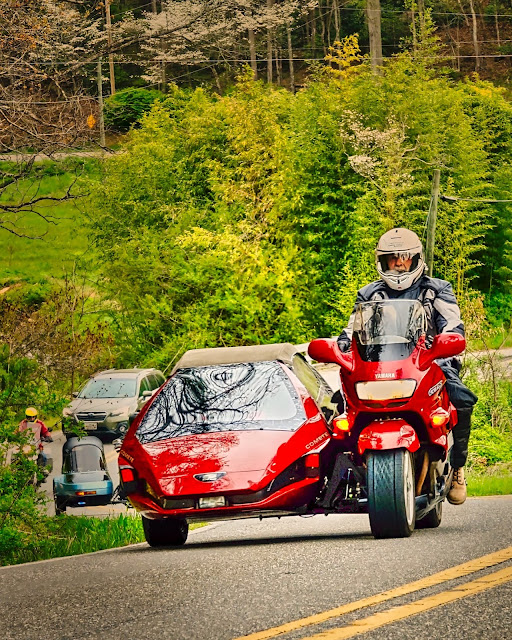 After lunch there was a lot of tire kicking in the hotel parking lot, as we admired the customized rigs and made new friends. With a bright sky and dry pavement waiting, everyone soon scattered to ride their own special winding road.

Sadly I could not go with them. My BMW/EZS rig had picked up a self-taping screw in the rear tire that morning, darn those Dragon Tail screws. With the help of fellow sidecarists, Friday afternoon was spent attempting a plug and seal on an stubborn steel belted car tire. Unfortunately neither the pig-tail plug nor the fix-a-flat could convince the tire to hold air.
Check out the sky in this photo...
you know what's coming. 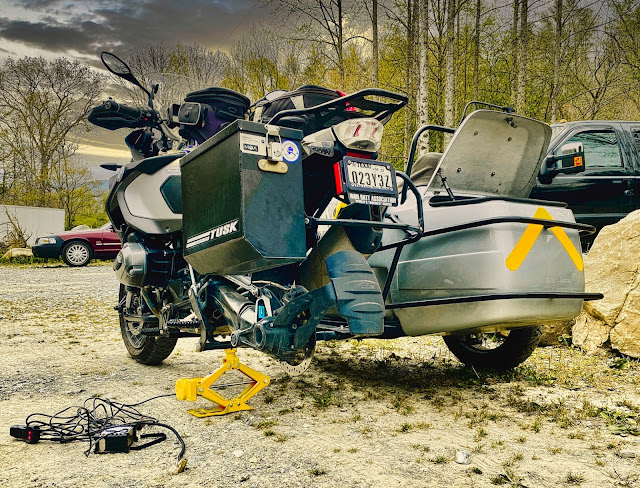 Not all rides go perfectly as planned, but then that is part of our adventure. Glancing at the sky then the weather forecast, I decided to load the rig back on the trailer for a planned trip further north to Cleveland, Ohio Sunday morning before returning to Texas mid-week. There is a new rear tire waiting on the shelf back home in Texas for our return.
Grabbed some snapshots of the rigs parked
under cover for the night. 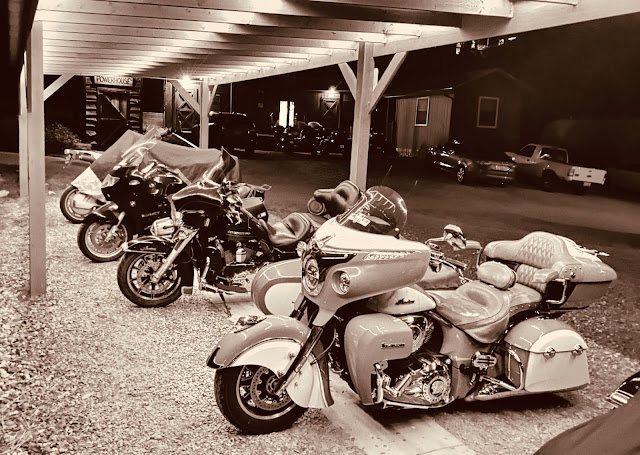 The Iron Horse campgrounds is very motorcycle oriented, dedicated to serving the motorcycling community with a campground layout that caters to two and three wheel riders, offering fuel, air, lodging, camping, RV hook ups, ice, restaurant services and rider merchandise. Their location near the infamous Tail of the Dragon and many lesser known but equally great motorcycling roads makes this a perfect relaxing hideaway and base camp for motorcyclists. 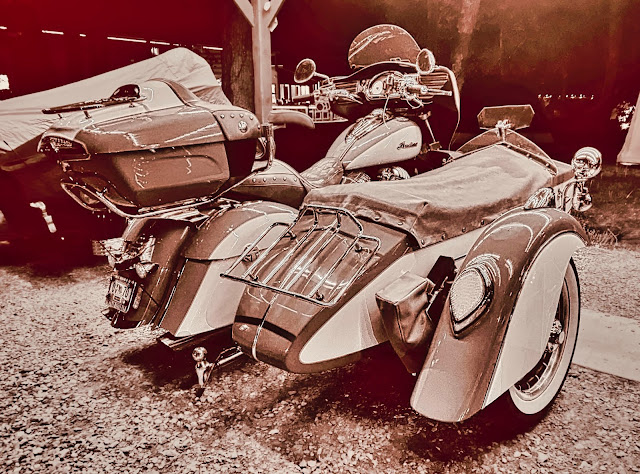 Early Saturday morning, the rains arrived in the form of a cold slow drizzle with low clouds lingering over the campgrounds for the next twelve hours. If not already under a carport, rigs were covered with tarps, tents were checked for leaks or flooding. The cold steady rain hung around until late afternoon. Making for a lazy kick back time for socializing and getting to better know our fellow sidecar pilots. Though it was sad to see all those beautiful sidecar rigs not being ridden, the roads were too wet and too slippery to ride at any speed.
A homemade custom rat rig under tarp, not staying much drier than the contents of his tent. 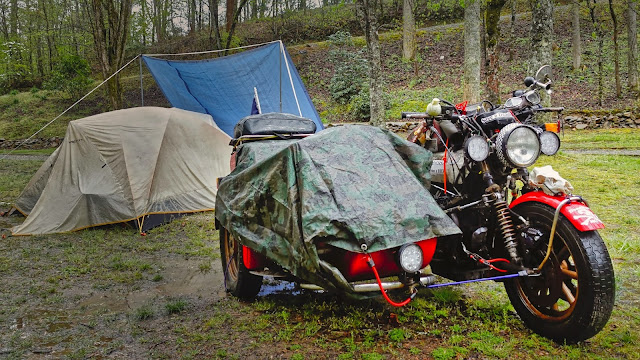 Even the high dollar factory Hannigan rigs sat idle due to the steady rain. While the passenger would stay dry in that car, the rider would be soaked. 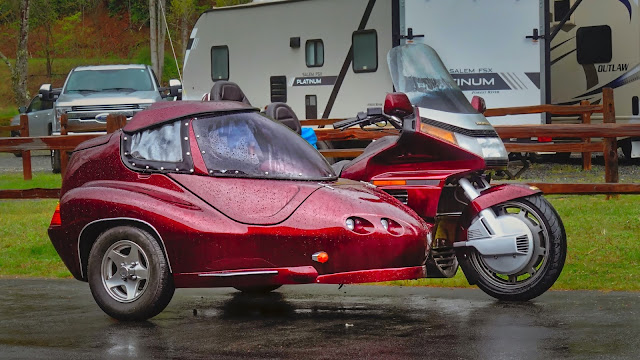 With a break in the rain, asked a couple of the riders to pose with their rigs for shots I needed for the Sidecar magazine. Rain or no rain, they needed clean sharp photos from the rally.
Bob Thibodeau on his 1999 Kawasaki Nomad
and Motovation sidecar. 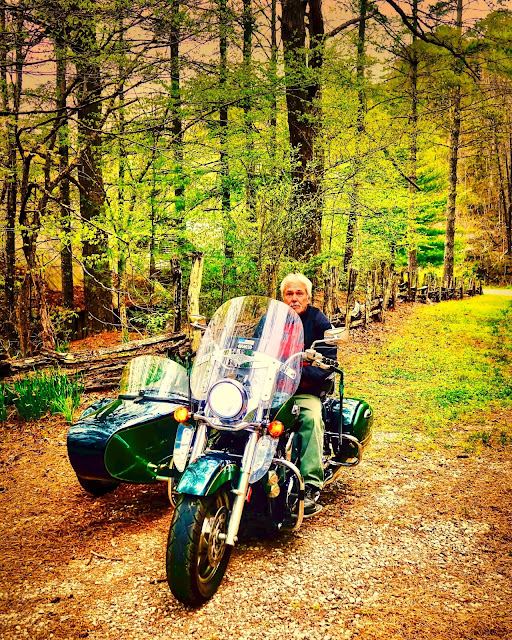 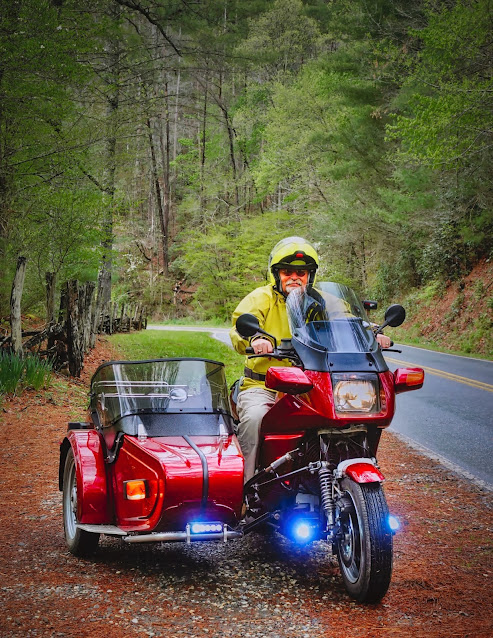 Relaxing with a cigar, Todd reflects on riding
the Carolina winding back country. 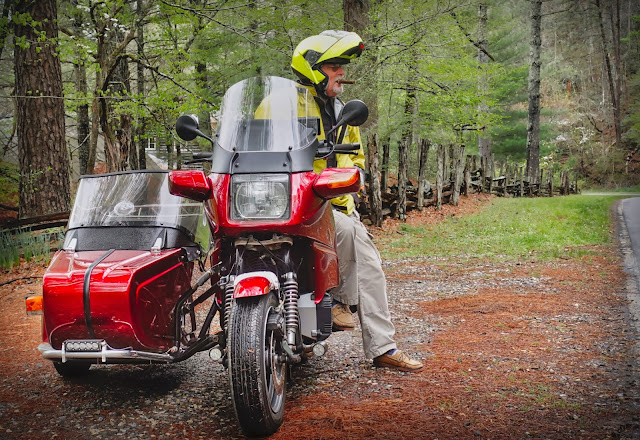 That's all from the road.
We're looking forward to the USCA National Sidecar Rally coming up the first weekend in June in Mena, Arkansas. Over 250 sidecar rigs are expected at that event.
See you in Mena,
ride safe y'all.
CCjon
Posted by CCjon at 10:30 PM 4 comments: