Falls Colors in the Rockies

In October, Amparo and I traveled to northern New Mexico to enjoy the changing colors of the aspen trees.  Mother nature put her best foot forward for us. 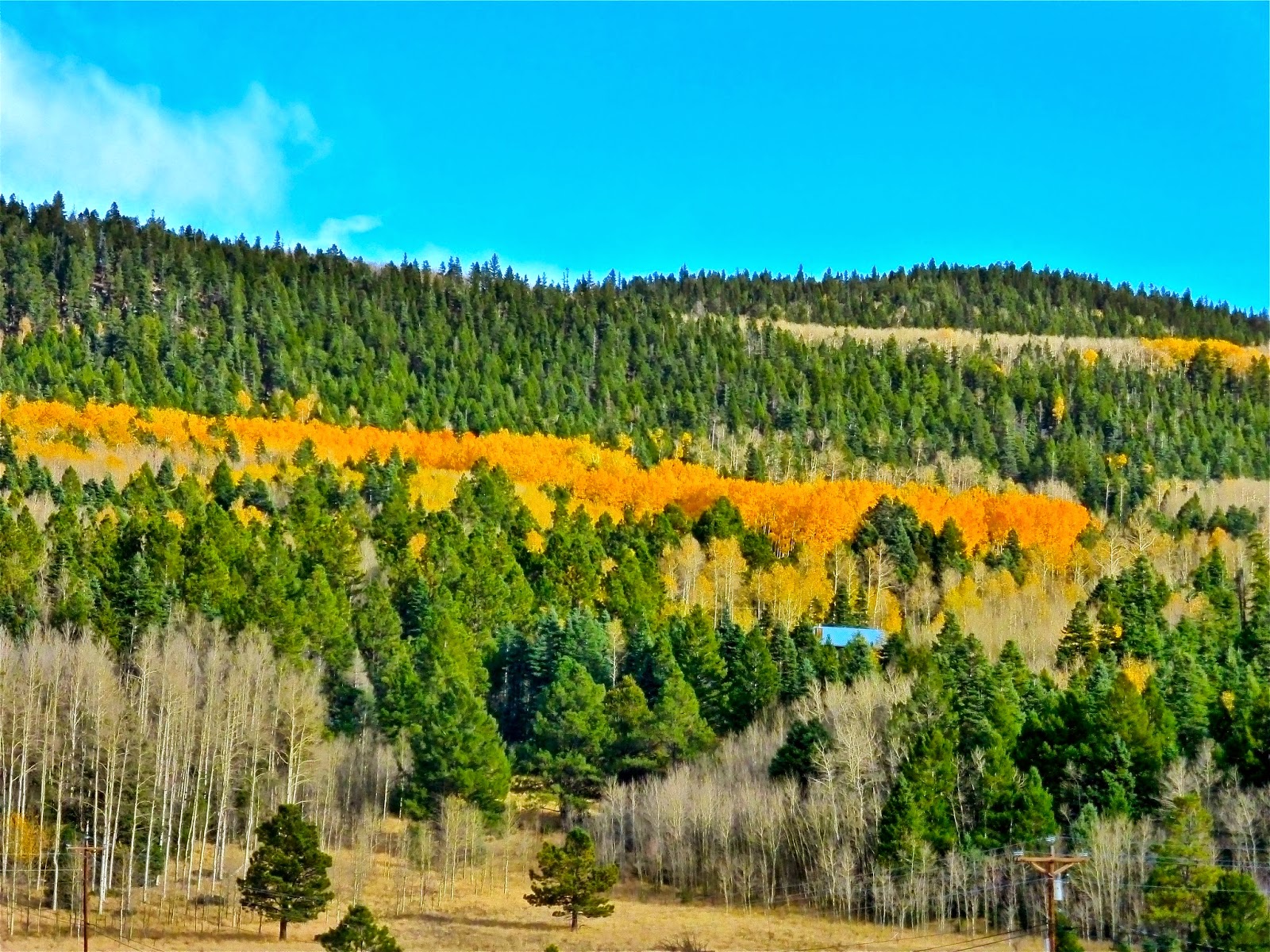 We drove some of the mountain back roads... 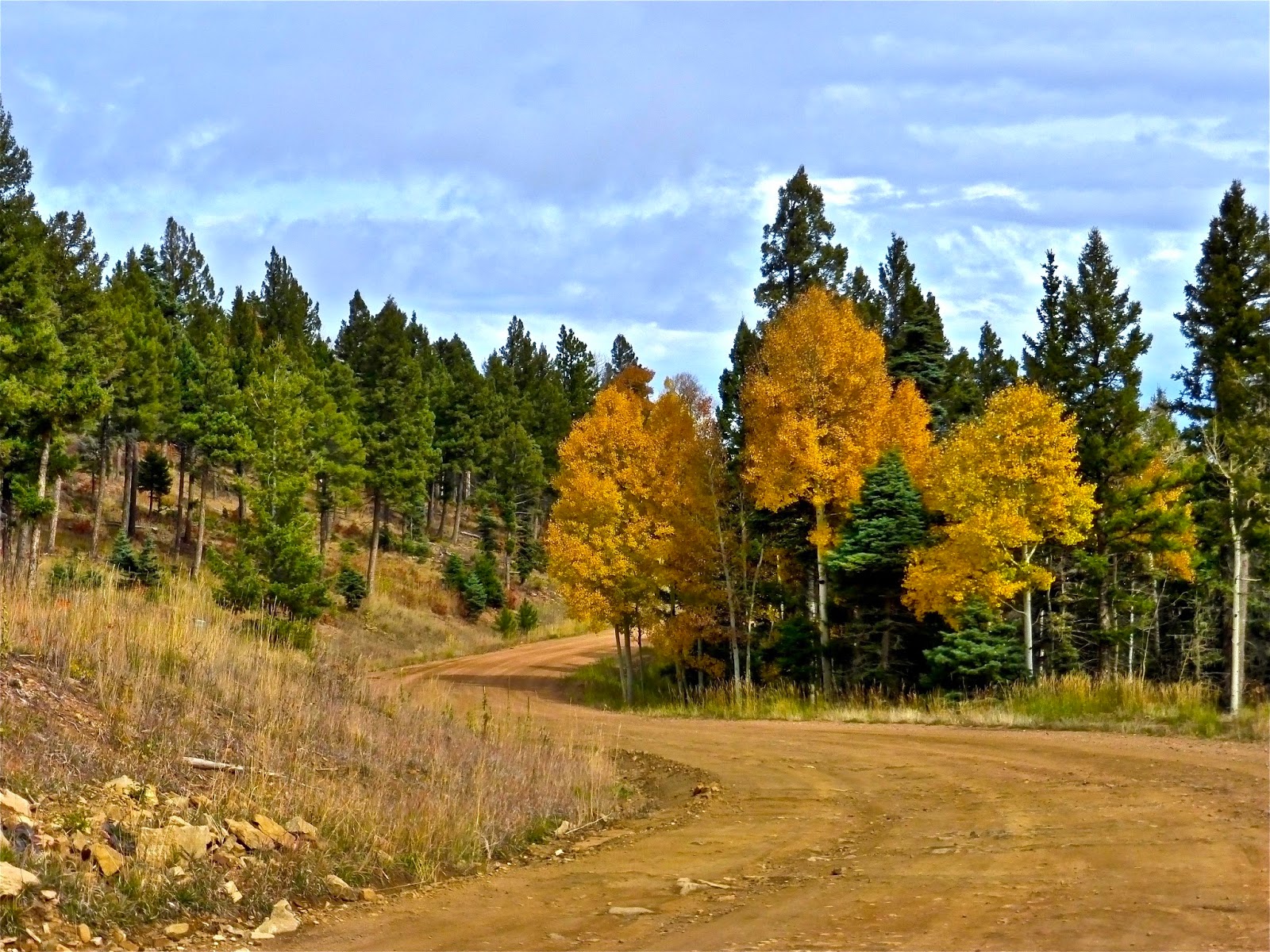 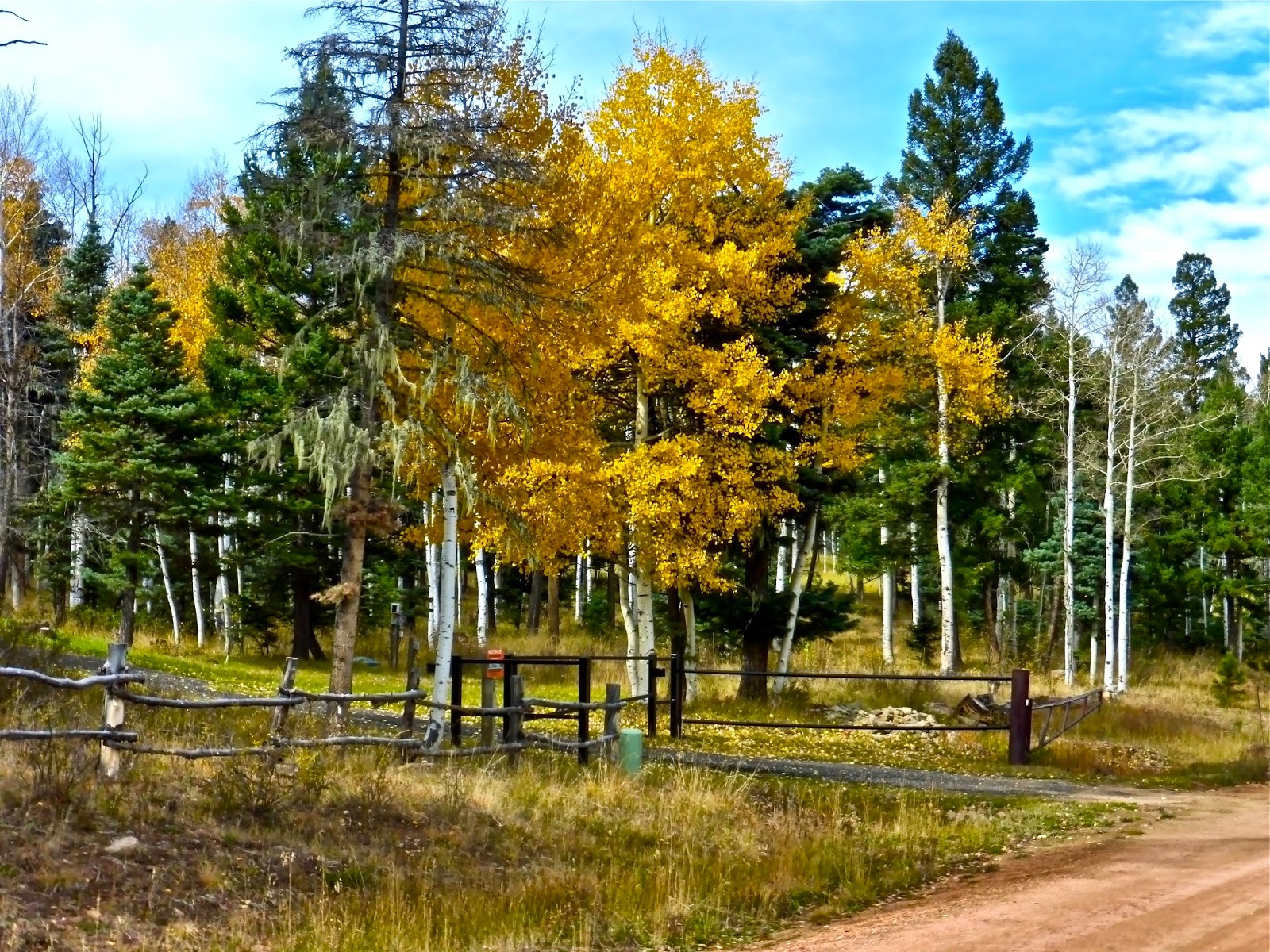 On the Picuris Indian reservation,  crossing a ravine was part of the aqueduct system. 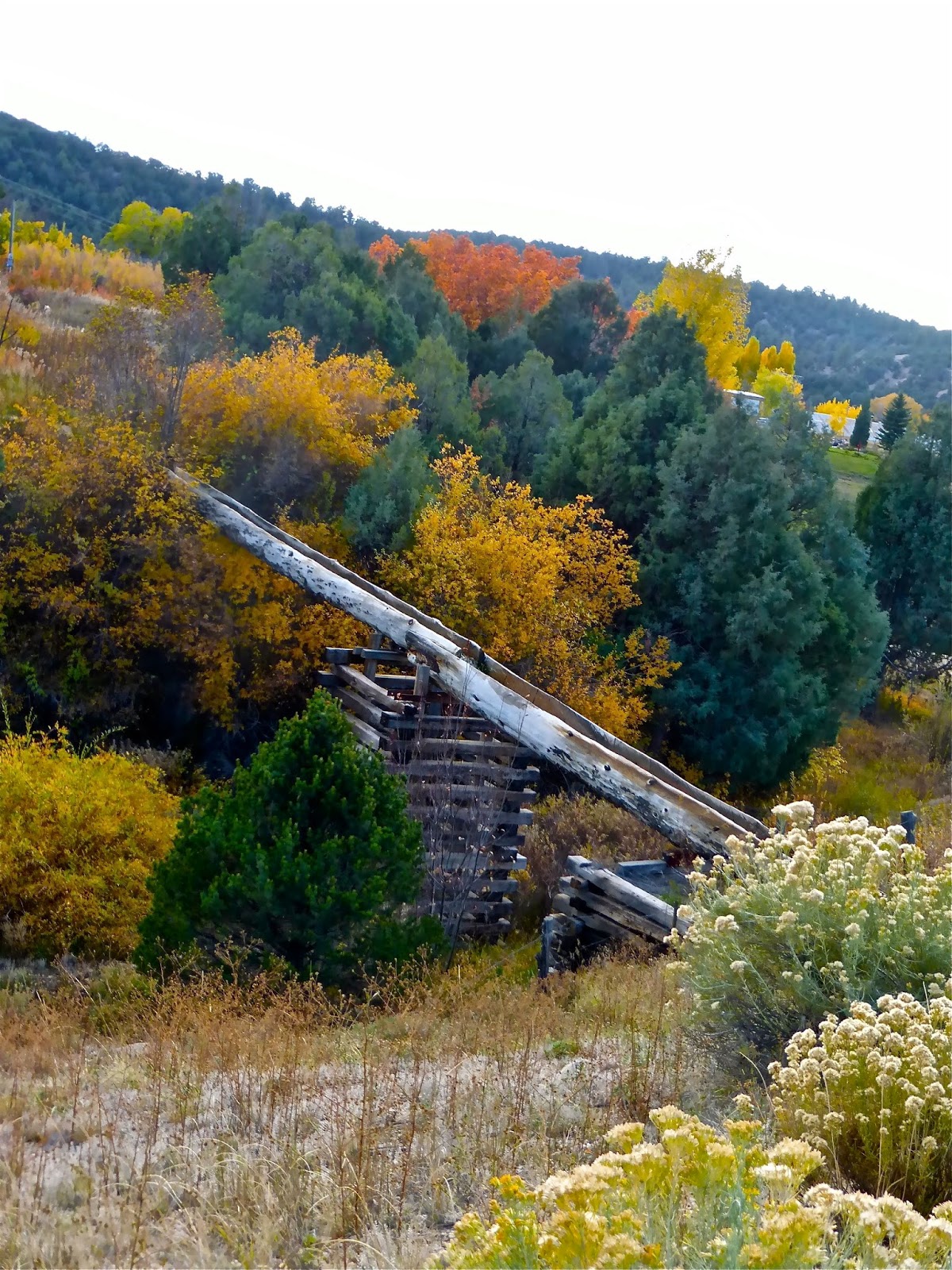 It was two hollowed out logs carrying water from an irrigation ditch, across the ravine to a catch basin on the other side. We wondered how long those logs lasted before having to be replaced. 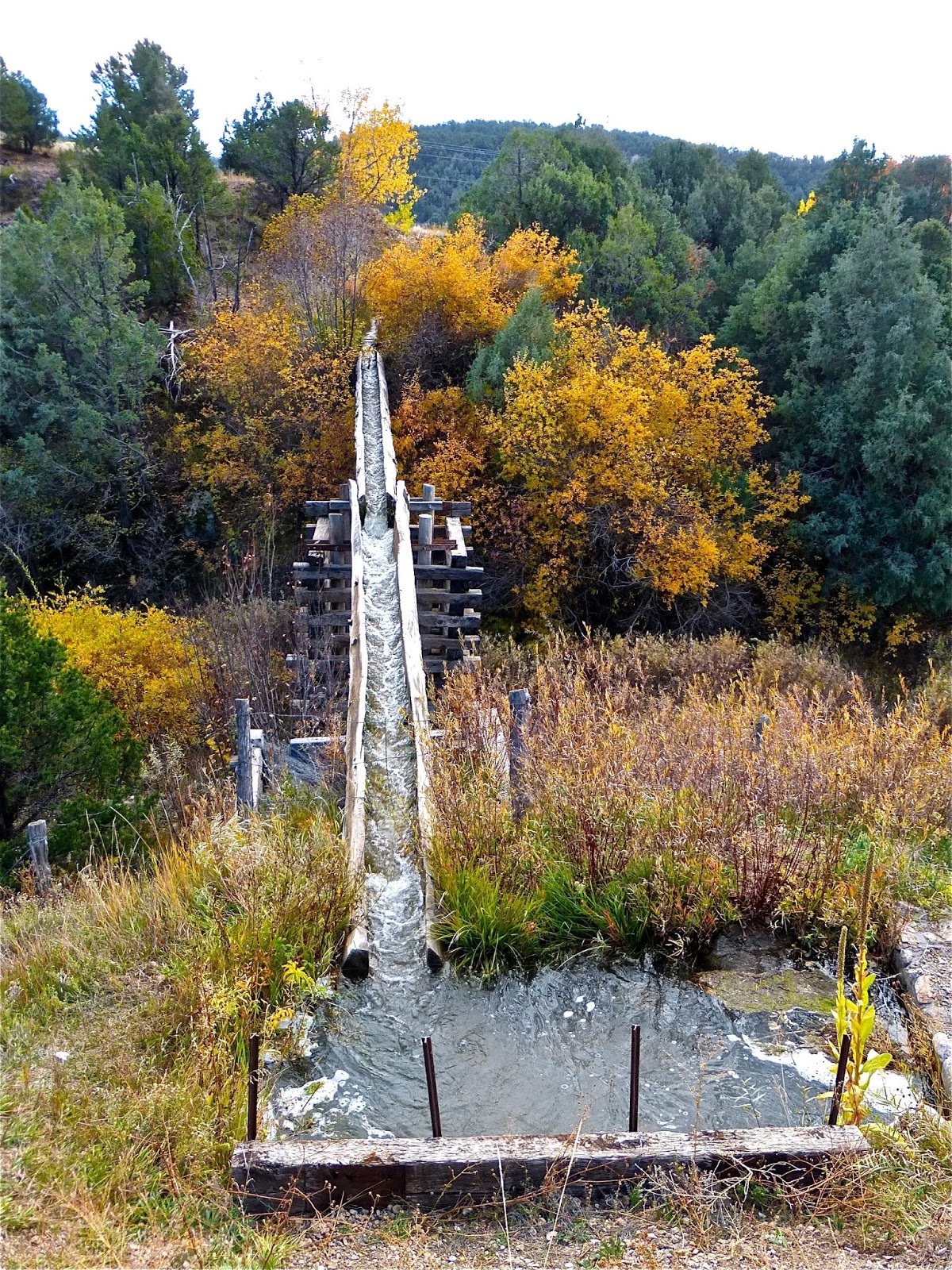 The aspen were not the only part of nature showing off their colors. Where Angel Fire gets its name, the sky set ablaze by the setting sun. 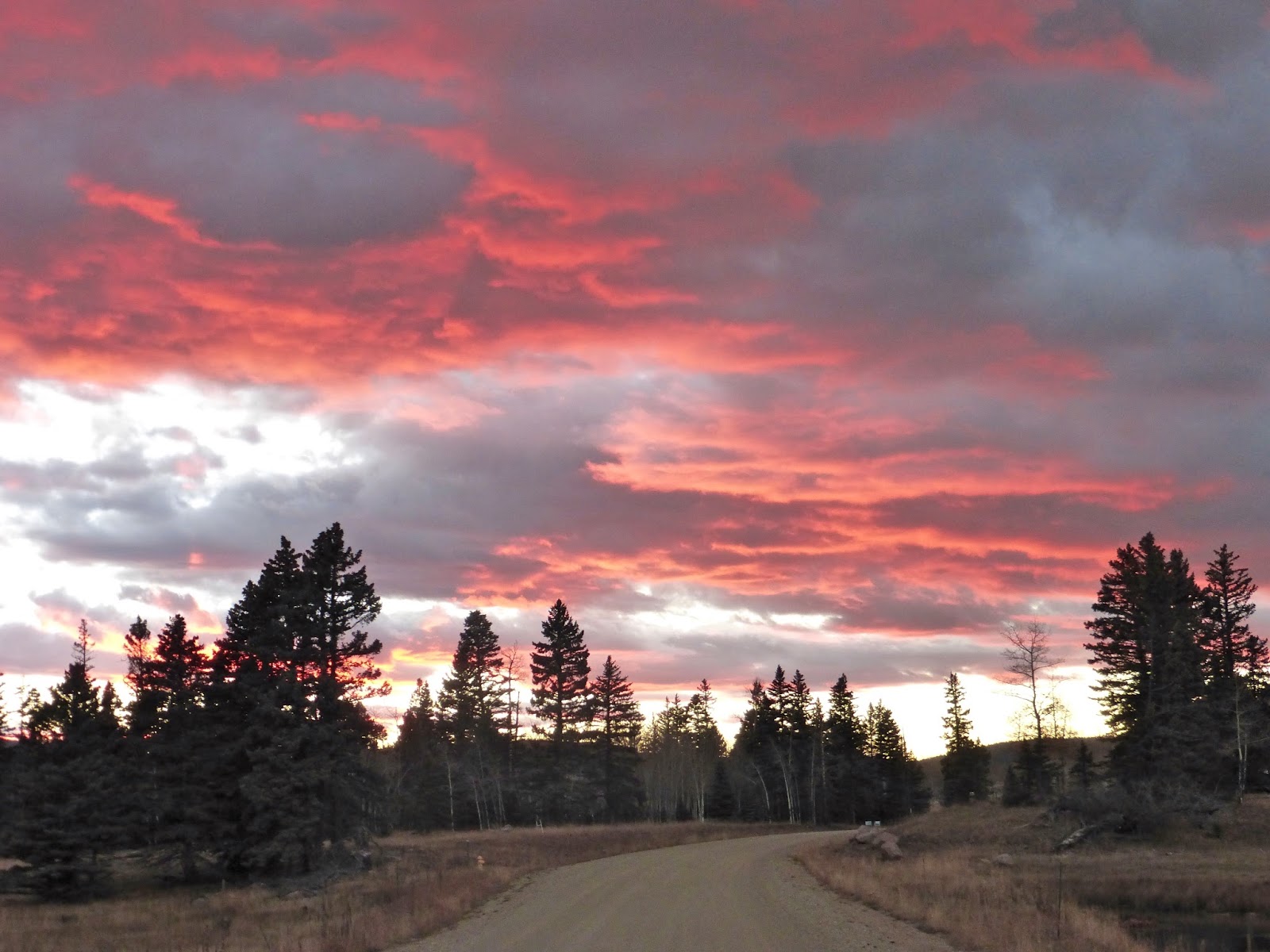 The next morning we were treated to a sight of fresh snow on the highest peaks, high above the treeline of aspen and spruce below. 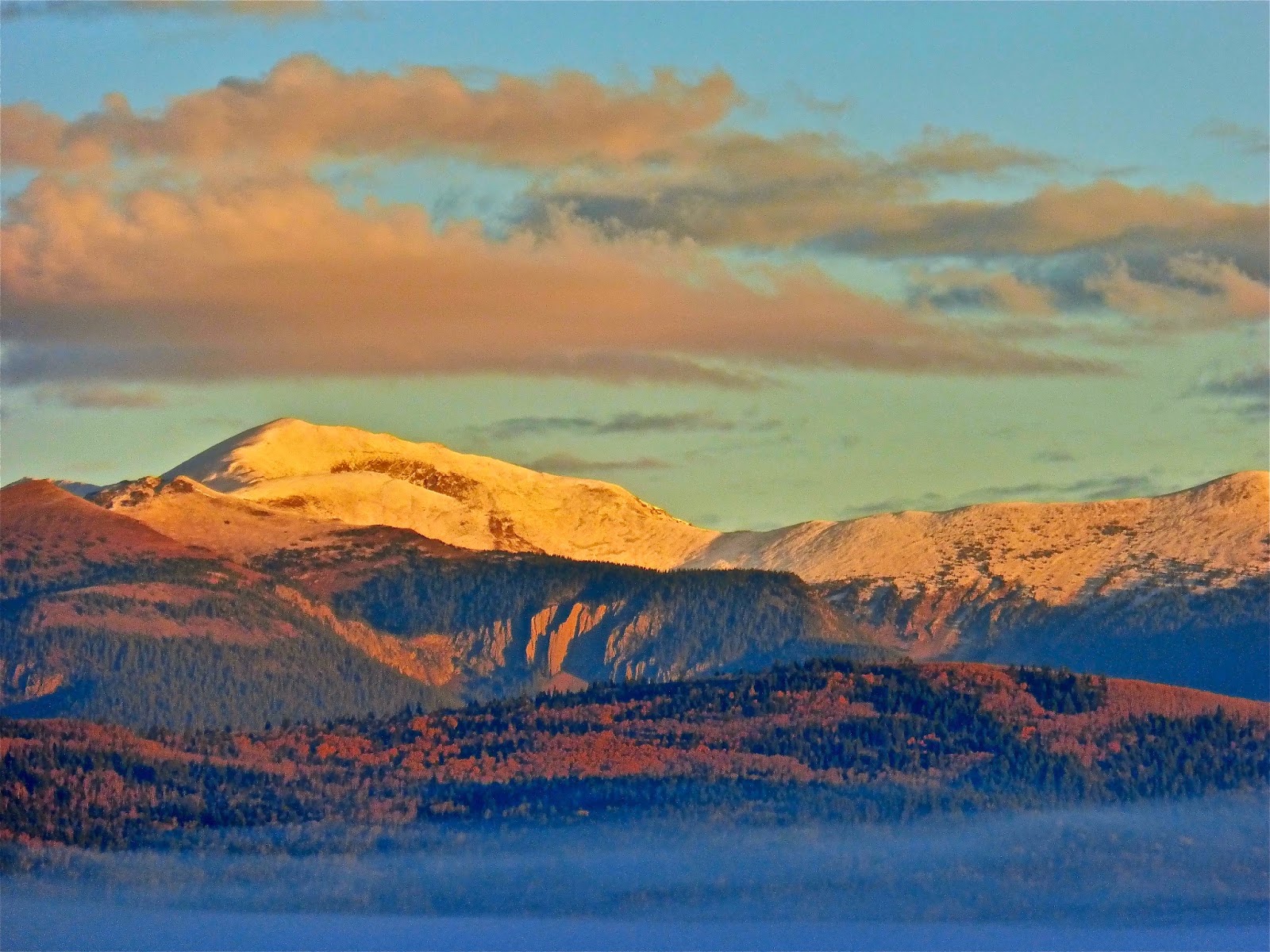 While driving around we spotted numerous wildlife. Though I gave up hunting several years ago, I still enjoy spotting wild animals, then quietly sitting and watching their behavior.

We spotted a hawk looking for its next meal. 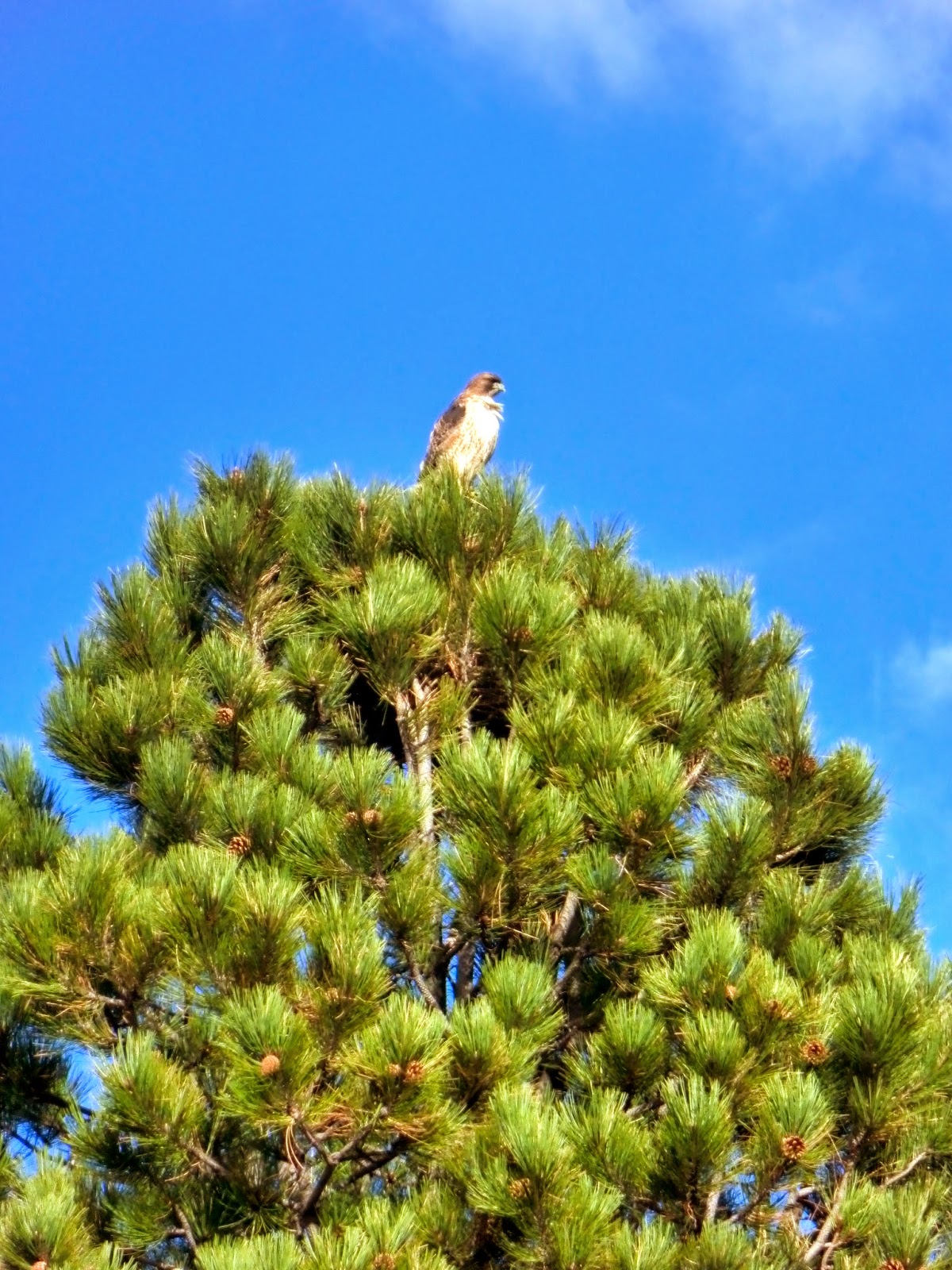 Later we came across a hawk pinning a gopher to the ground. Looks like he caught a fresh meal. We got too close, frightening the hawk who flew off leaving the gopher behind. Shaking itself off, the gopher jumped up and dashed for the nearest hole.

The mule deer studied us as we looked at them. 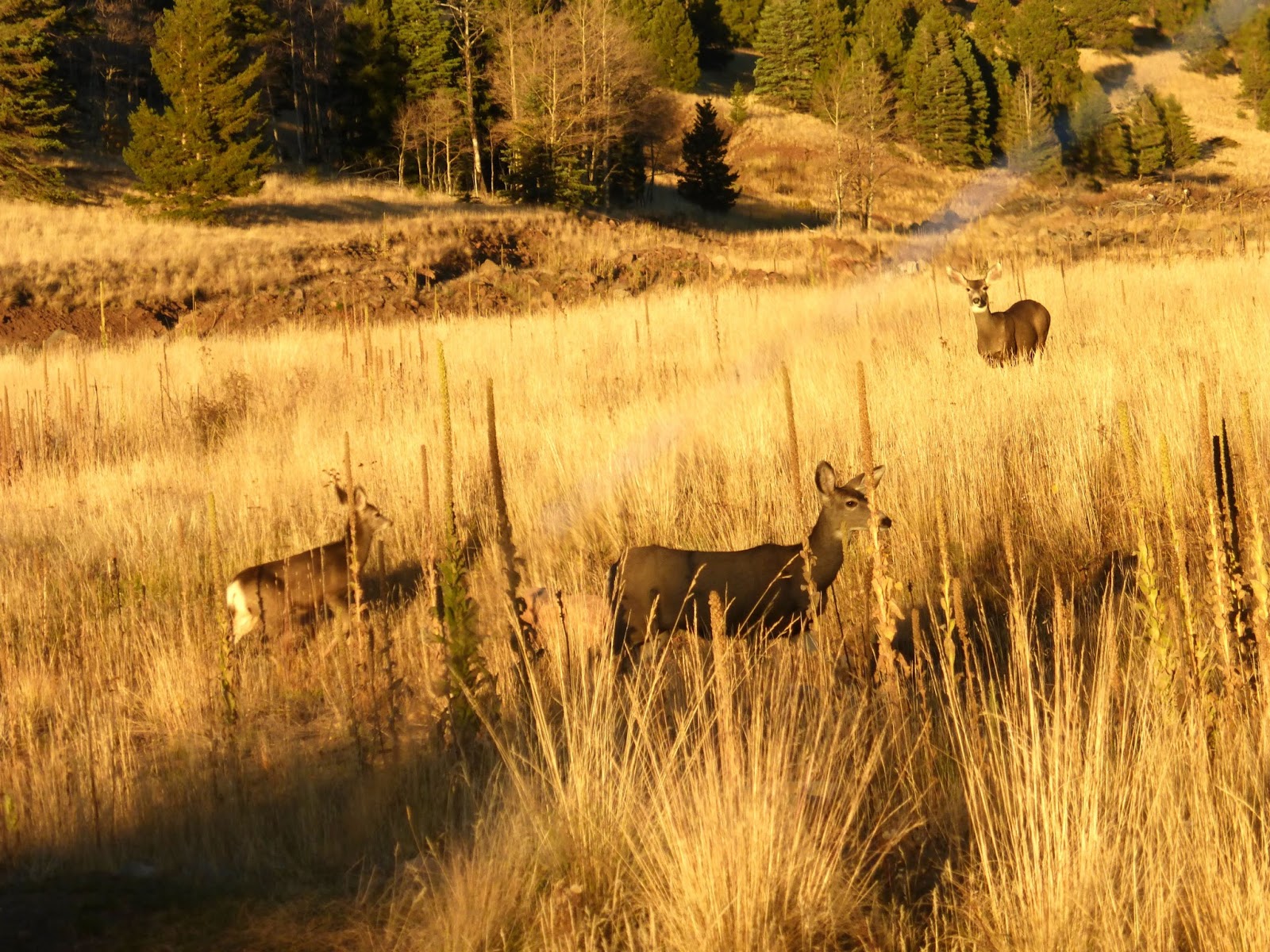 The pronghorn antelope seemed to cross the roadway unconcerned with traffic. 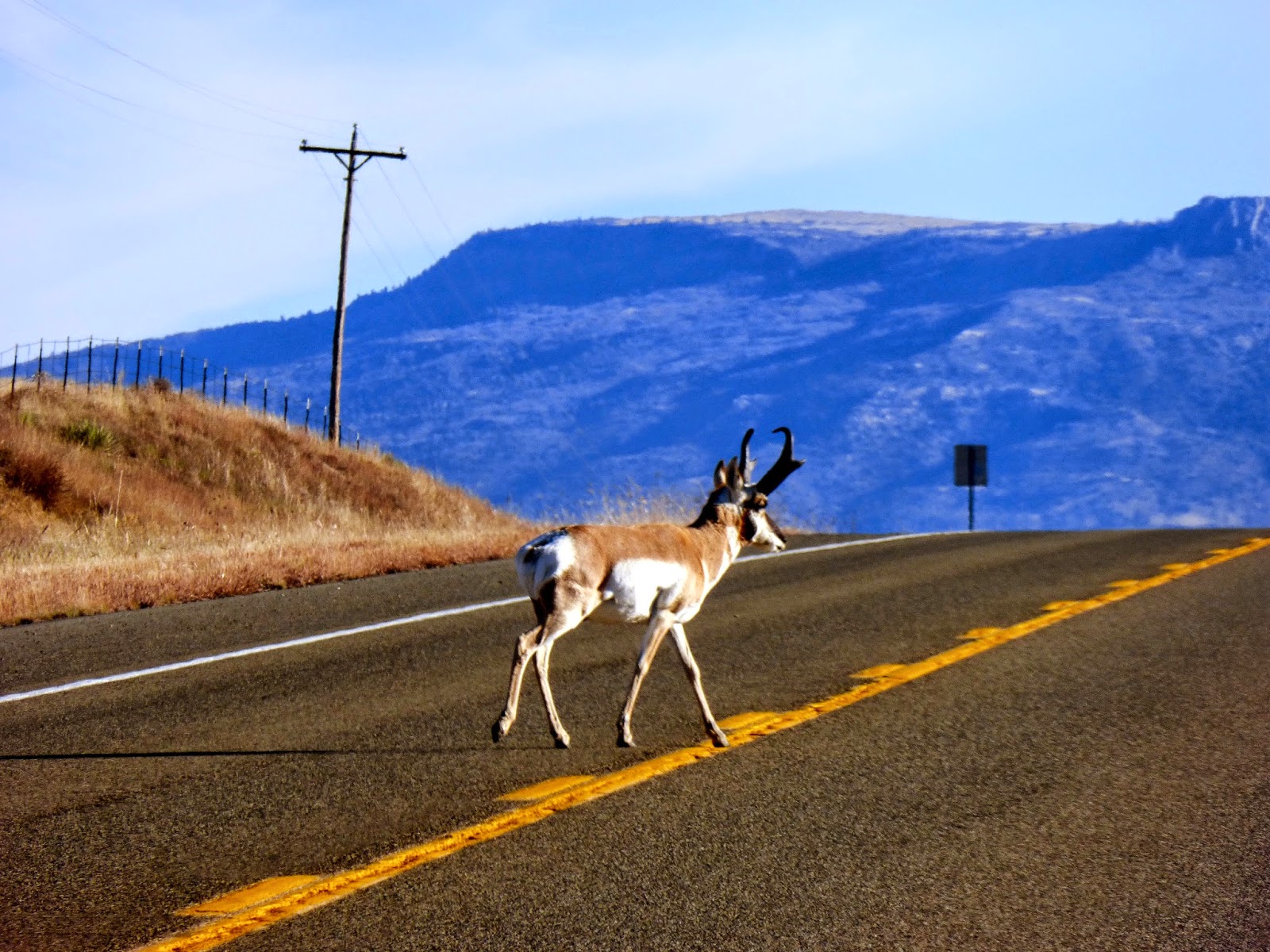 In the final hours of light, a herd of elk came out of the timber to feed. We counted 43 heads. 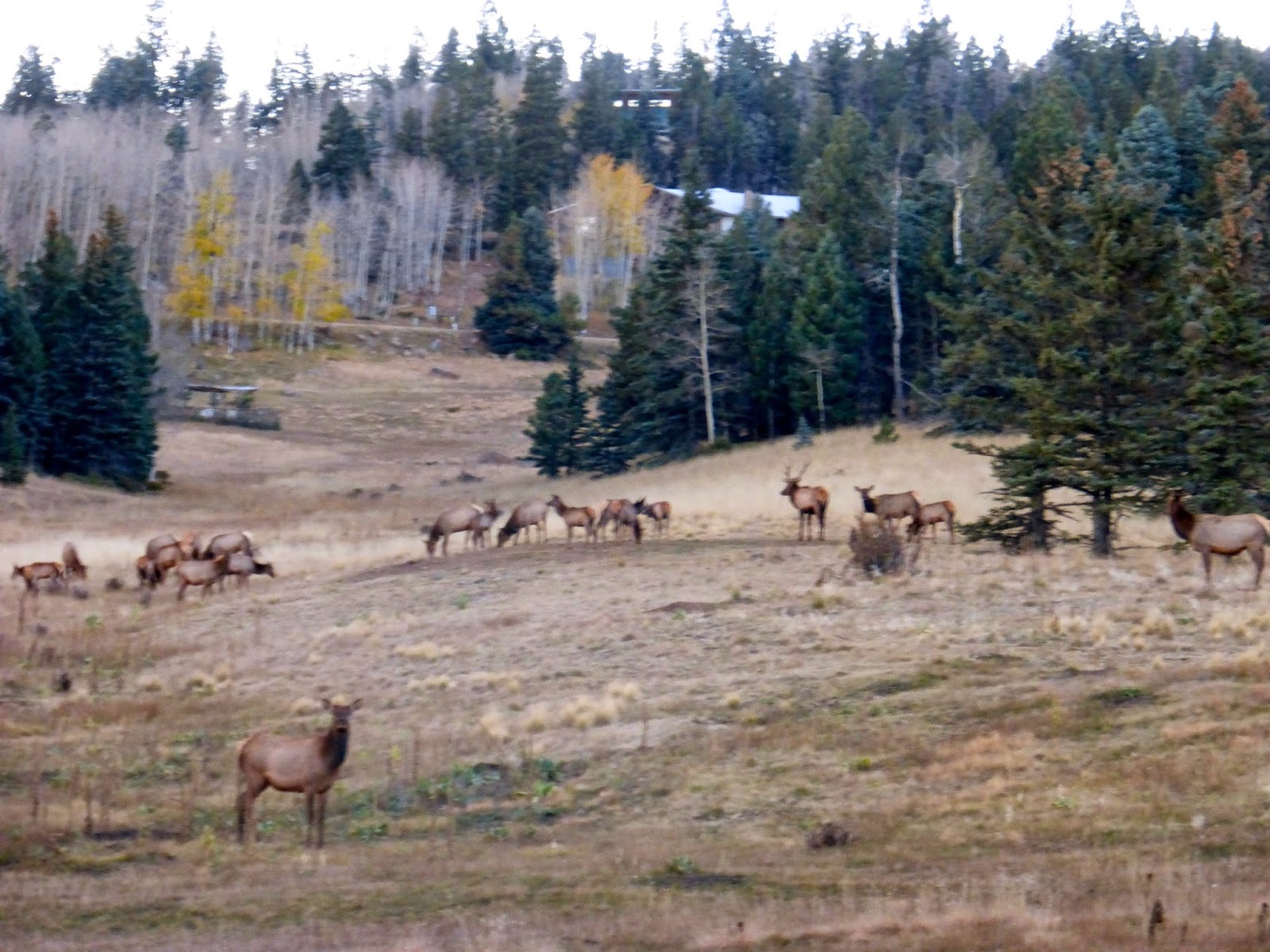 Our good friends, Mike and Laurel drove up to join in the tree watching. By the third day we were ready to see other sights, so we drove down to Taos and on to Santa Fe. 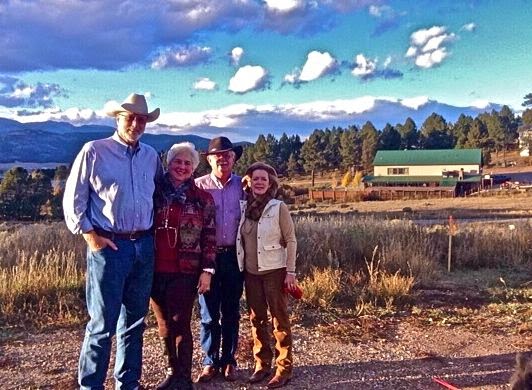 In Santa Fe, we took our friends to the Loretto Chapel to inspect the famous winding staircase.
Google Loretto Chapel for the full story and mystery behind this staircase.  It is hard to image this staircase, but everyone who sees it is in awe. How it that possible? How was it built? Who built it? All the questions that remain unanswered after a century and a half. 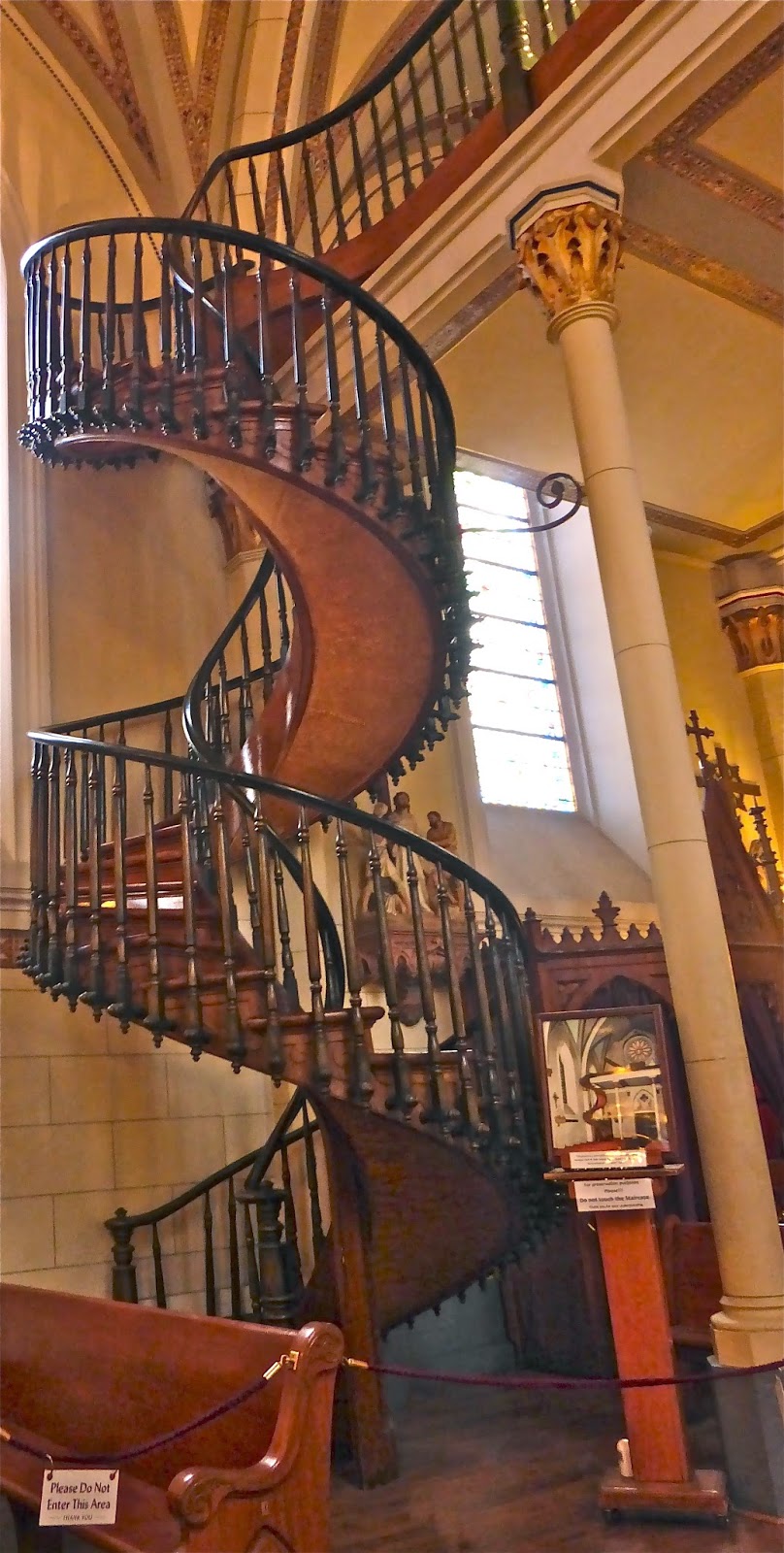 There is no center support or column for the staircase. The railings and side supports were added several years later as the nuns found it too scary to climb the stairs to reach the choir loft. To descend with no handrail, the nuns would sit down and slide down the stairs on their bums. Safety above modesty.

On our return drive we saw remnants from the frontier days of New Mexico history. 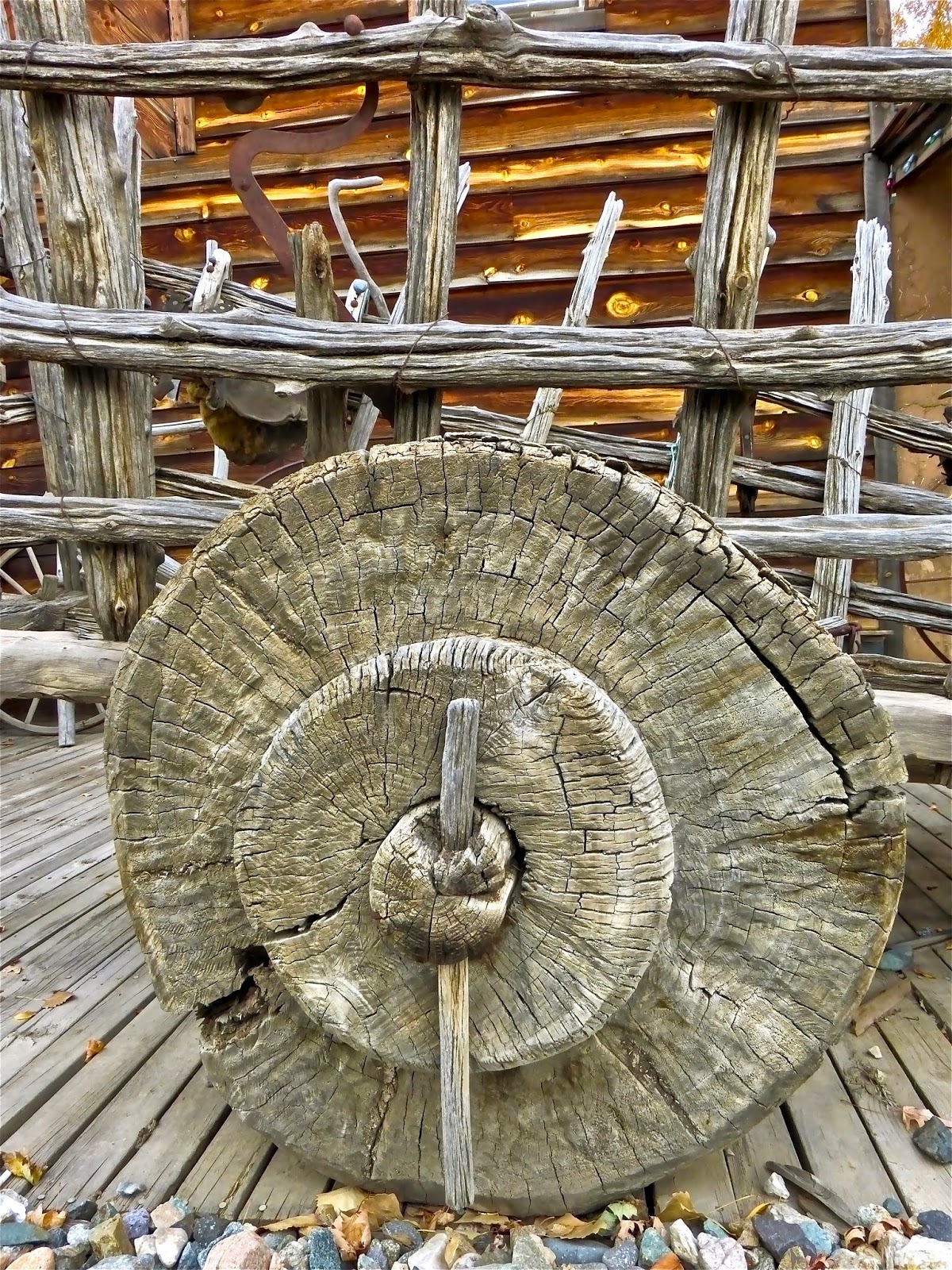 The wheel on this ox cart was cut from the trunk of one tree. Must have been some rough riding, being out of round and all. 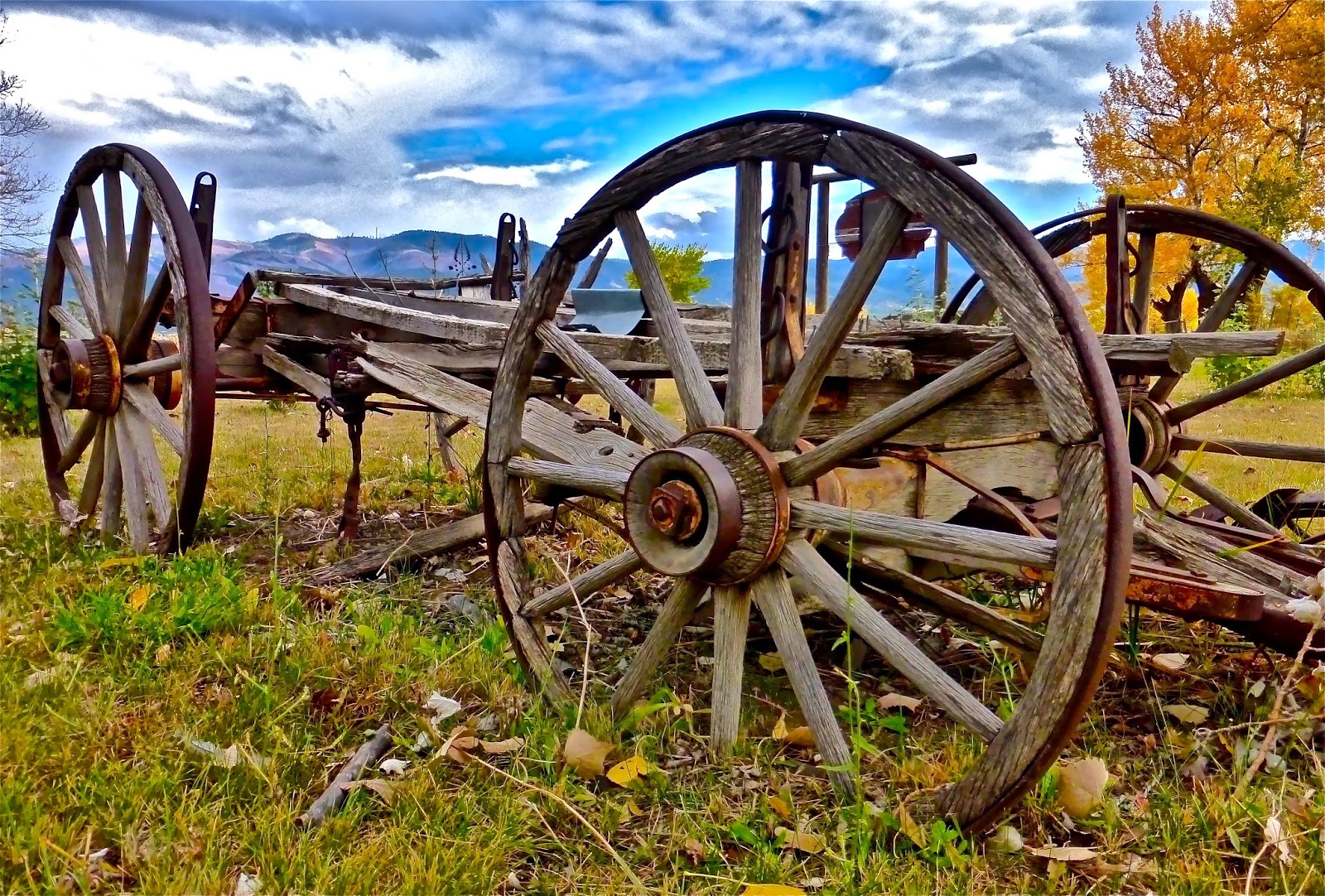 This wagon has reached trails end. Our trip was relaxing and enjoyable with good friends and greats sights. We never get tired of visiting norther New Mexico even if it does take two days of driving to get there.