This month's assignment:
Get creative with a photograph of art,  resulted with this image... 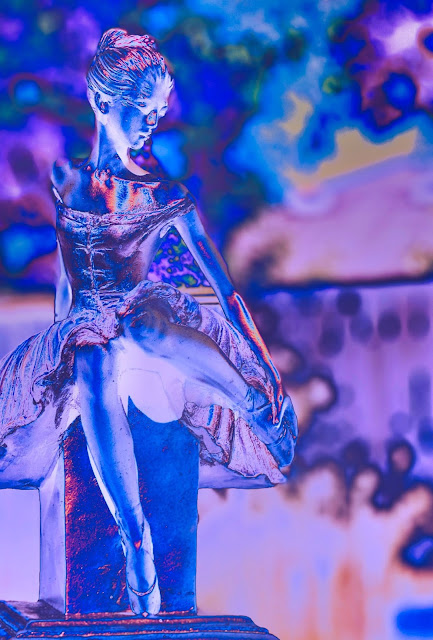 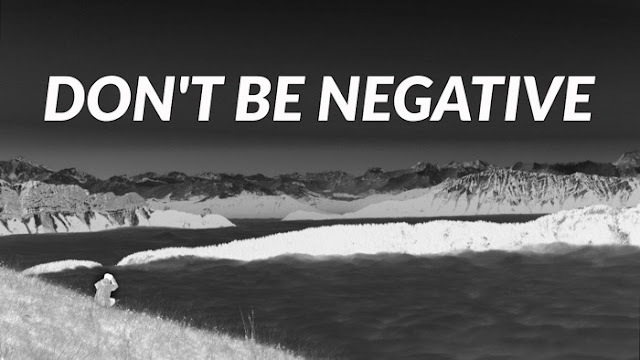 Enough of fun and games, let's get back to the serious business to hauling the Warthog. Not that it will spend much time on a trailer, but when the need arises, I will need something wider to haul the Warthog than my current trailer.

The Warthog is, well not to offend anybody, but SKINNY is never a word to be heard in describing
the big W.

The search to find a trailer wide enough to haul W took me far and wide. So as not to add unnecessary weight and load to the Honda Ridgeline truck I drive, decided an aluminum trailer would be ideal. Aluma trailers make a 78 inch wide model, while Bear Track has an 82 inch model.

During a phone call to the manufacturer of BT trailers, was told they will not sell direct to the public. Learned most of their dealers are in the upper mid-west as the manufacturing facility is in Minnesota.
Then the coronavirus pandemic set in. the search was grounded.

After several attempts a month or so later, a very nice lady provided me with the names of dealers who had recently ordered the model of trailer I was looking for, the BT82120S. Eighty-two is the width, 120 is the length, making it a ten foot long aluminum single axle trailer.

One was sent to South Dakota and the other was sold to an Iowa dealer but shipped to Florida... hmmmm. My sister lives in Florida, maybe make a combo trip.

A phone call to Zypherhills Florida had me talking with Cindy and Todd, the owners of Florida Trailer Solutions. Yes, they still had that trailer on their lot, but Florida was currently shut down with the pandemic. However they agreed to hold it for me until travel restriction were lifted.

With all the retirees there, Florida was hit hard with the virus. For me to get to Florida, I would have to drive across Louisiana. A state that was hit even harder than Florida. Both Texas and Florida were closely checking every vehicle coming in that had been in Louisiana.

Checking the map and distances, if I gassed up at the last stop in Texas, I could drive across Louisiana without stopping until I reached Mississippi.

By the third week in May, businesses in Zypherhills were normalizing, so decided to make the run of  2500 miles. Three days to drive there and back.

After reassuring them I had not stopped nor slept in Louisiana, New York, New Jersey or Pennsylvania in the last month, the Florida Highway Patrol kindly allowed me to enter their state.

Forty-five miles south of Zypherhills lies my sister's home. Spent very nice but a brief time with Sis and her husband, walked their dog Jake, told a few jokes and slept in a comfy bed.  Though during the night Jake tried to hide my socks.

Once back in Texas, a test loading of the Warthog. Looks pretty good, easy peasy, right? 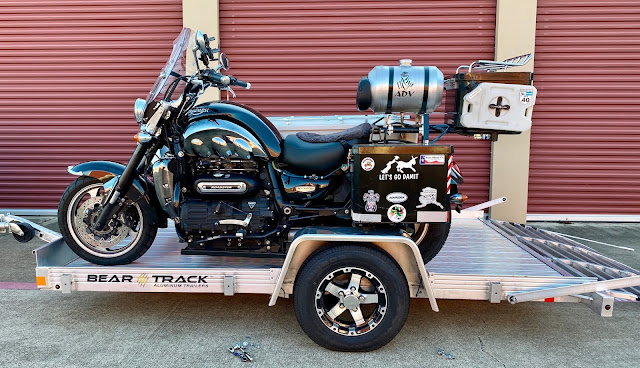 Well looking at it from the rear, the story changes. While the trailer bed is wide enough, clearing the trailer fenders is a challenge. Modifications will be needed. 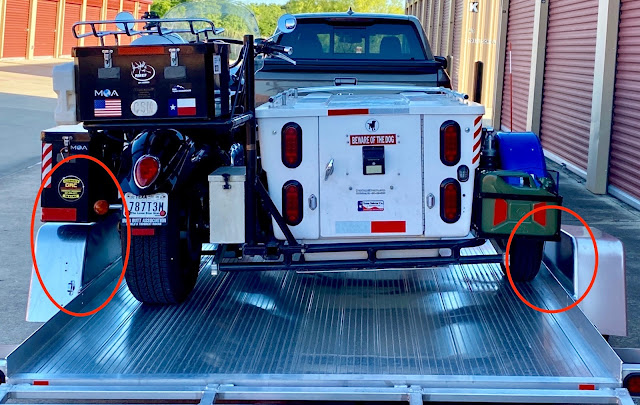 To me, one of the selling features of the Bear Track trailer was the fenders are bolted on, not welded.
On the sidecar wheel (smaller circle on the right in the above photo and seen below), clearance is tight. But if I use longer bolts, I can insert four 1/2 inch plastic spacers to move the fender out enough that it will not rub on the sidecar fender. 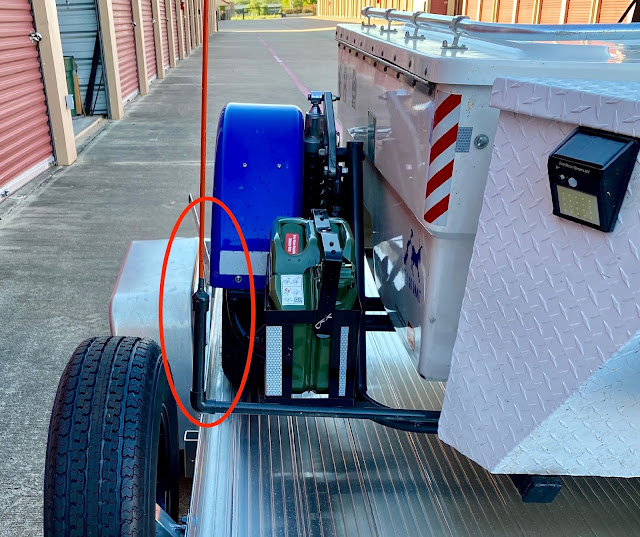 Clearing the trailer fender on the bike side is a different story. The left pannier is up high enough to clear the fender.  But the left engine guard and the left foot peg will not allow loading with the fender in place. Moving it out a half an inch will not work on this side. 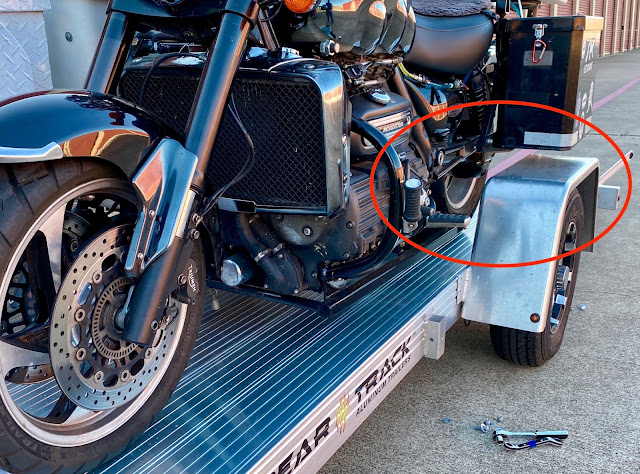 In the next photo you can see left foot peg sticks out too far.  The peg does fold up... some but not enough to clear the fender. Note: I had removed the fender completely to load the bike then set the fender back on the trailer to get a better idea of the clearances.

A coupe of possible solutions were kicked around. 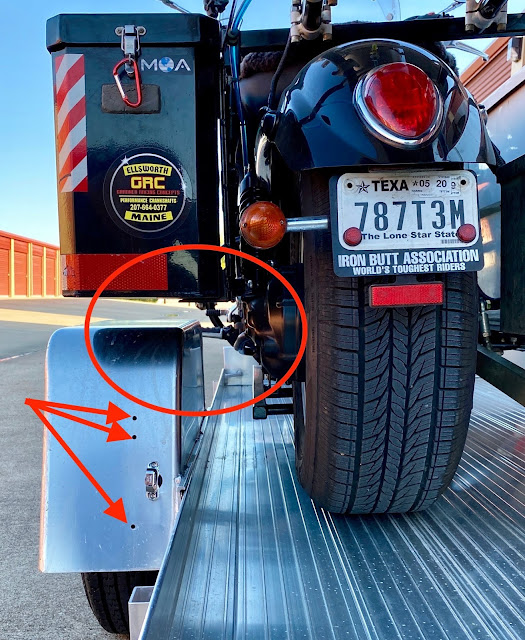 2). Hinge the fender to swing out of the way when loading the rig. The fender has a wheel well panel on the tailer side (that can be seen in the above photo) that will only allow it to pivot out a couple of inches. Not enough to load big W.

3). Mount the fender on sliding rails hung from the under side of the trailer. Pull pins, slide the fender straight out to load. But that inside wheel well panel doesn't allow it to slide out more than a few inches. Not enough to clear the foot peg.

4). The final solution and the one I decided to go with, rather than involve complicated fabrication to swing or slide the fender, simply unbolt the fender, set it aside, load big W, then reinstall the fender.  Four bolts and we're done. I don't anticipate hauling big W that many times that this will be a major issue. Carrying my other rig will not be a problem with this trailer.

Wish my other May issue was as easy to solve, but the doctors here at Houston Dental Esthetics think they can fix the teeth situation, by replacing all the uppers. After breaking off two upper teeth in the first six months of 2020, at the age of 75, my teeth are getting brittle. Instead of long distance riding this summer, we'll be short distance dreaming of long distance riding while the mouth heals from a late June surgery.  Road vibrations are not good for strong healing.

Maybe by late summer we'll be up for a long ride. Doubt if there will be much wrenching or riding for several months. In the meantime, will focus on the photography while recuperating. 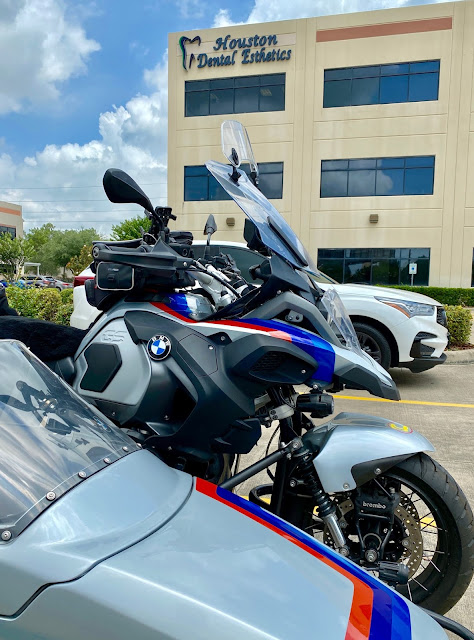 Parting shot...  just when I thought the Warthog was the ugliest three wheeled rig, saw this photo on the internet. Now that is one ugly three wheel motorcycle contraption... and needs to be towed. 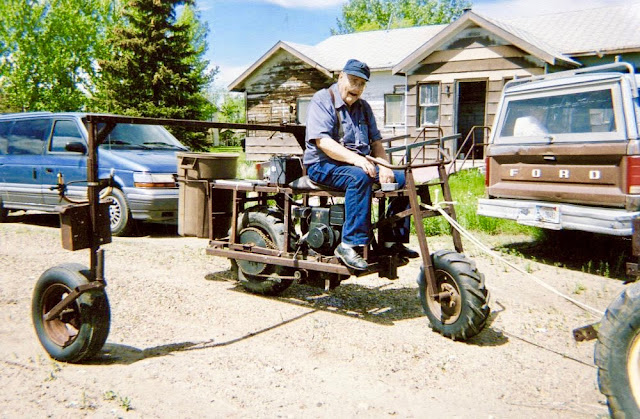 As the country re-opens... y'all ride safe and far.

Wash your hands and don't cough on each other.

Here are a few of the photos from the interior of Iceland,  well, not the interior interior,
but away from the capital city Reykjavik.

Cold, damp fog rolls in, as this photographer waits on the cold beach for that right moment to capture
the fog shrouded "three elves" in the distance. 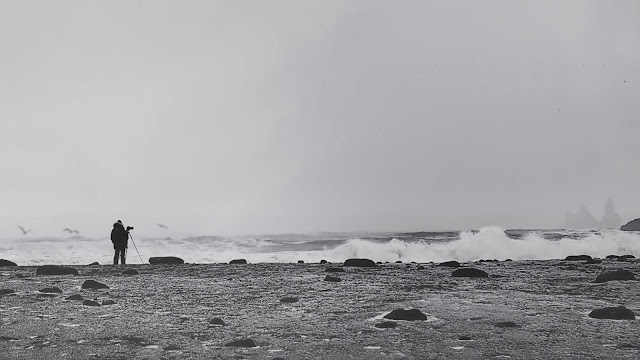 Next day is bright and sunny.
As clouds receded, exposing the peaks, captured this view of Rangárping Eystra. 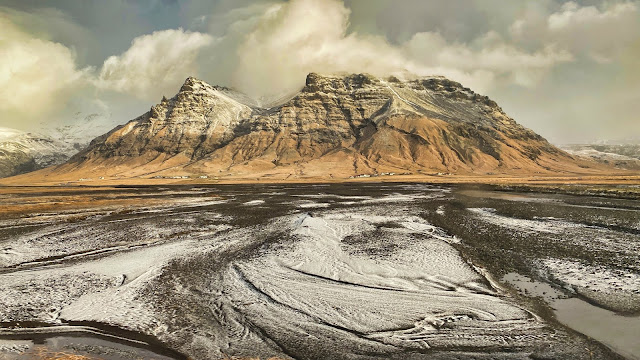 Experimented with a panorama shot to capture all of the ice flow.
Iceland's landscape is vast, frigid, empty...
yet full of highlites, contrast and points of interest. You can be standing in dark shade while distant peaks are lite up in blinding sunshine.

We explored an ice cave. Clamp on steel spikes on the boots to keep from slipping and
a hard hat to protect your head when you do slip. 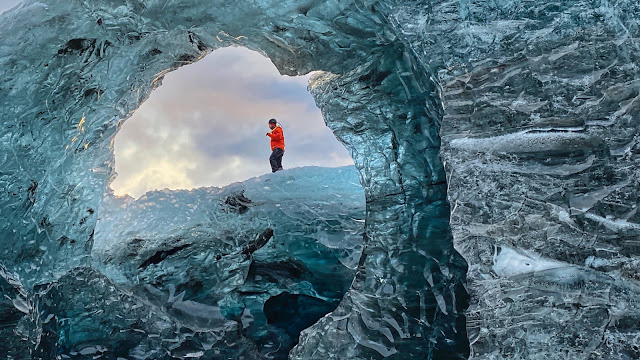 Down in the caves, captured Jean Pierre from France looking for a way up. 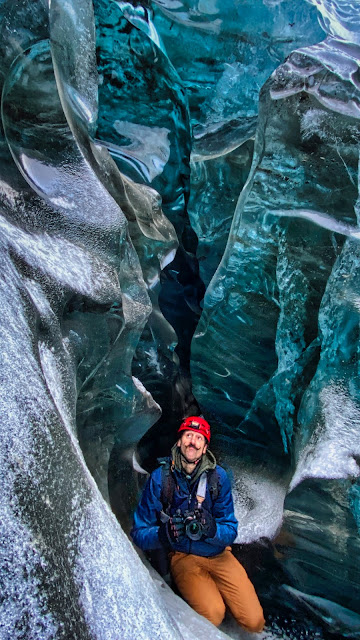 Thousands of pieces of ice wash ashore, slowly melting into the black sand, gives name to this spot...
Diamond Beach. 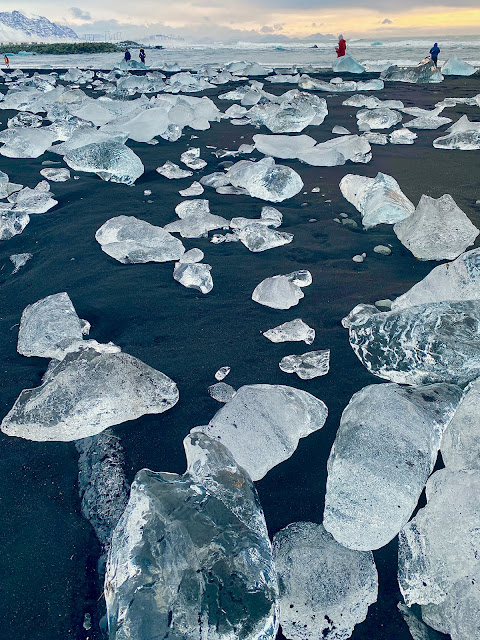 Photographers from around the world trek here just to capture a shot of the morning sun's ray reflecting thru ice surrounded by sea foam.
Often risking life and equipment to capture that perfect image.

Me? I capture images of photographers working the sun, ice and cold. 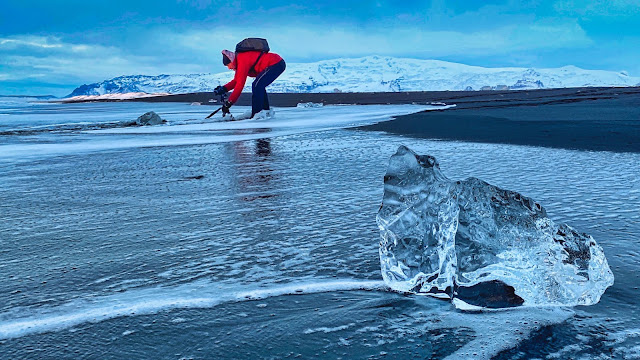 They will brave the coldest ice choked stream, looking for a better angle, wanting that perfect shot. 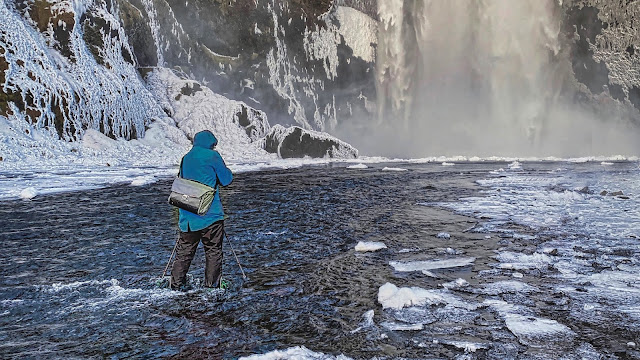 In pre-dawn light, climb high on a slippery ice slope... 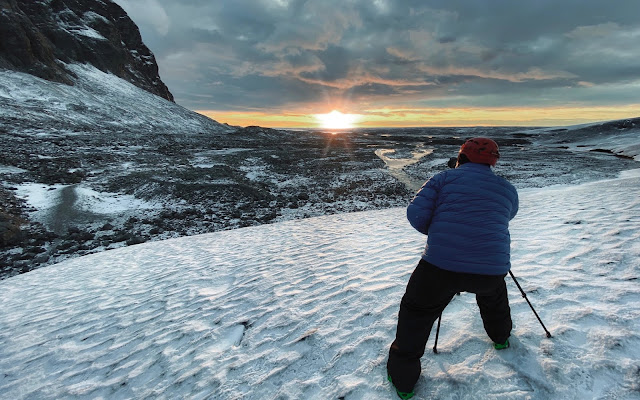 Only to stare into the blinding sun... all to capture an award winning image. 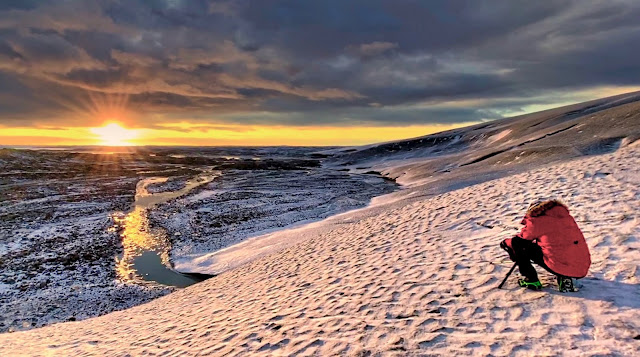 Come night fall, we were all hoping for a glimpse of the Aurora Borealis.

On the final night in Iceland, the clouds cleared just long enough.
Giving us a short opportunity to grab this...
a 20 second exposure... twenty seconds is forever for a photograph. 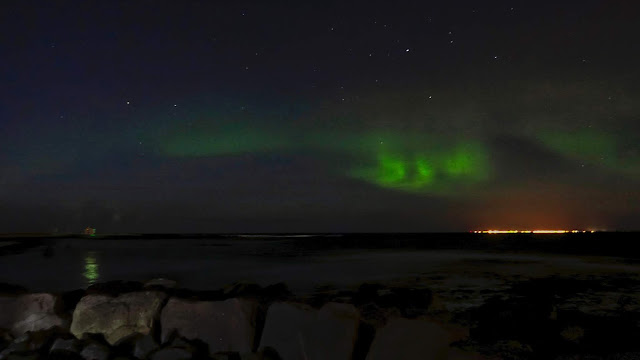 Iceland was a once in a lifetime opportunity to visit some fantastic photogenic locations.

Thanks for following along.
Ride safe, stay safe, be healthy. 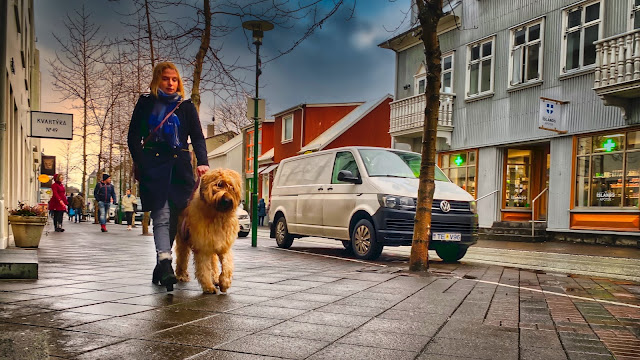 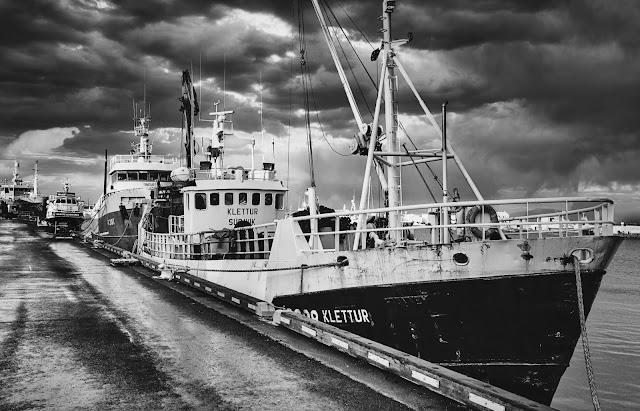 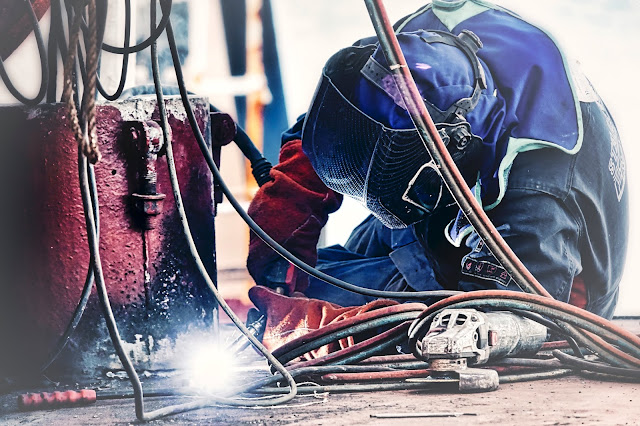 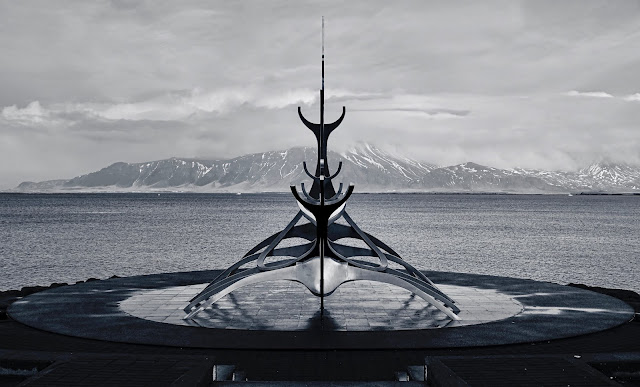 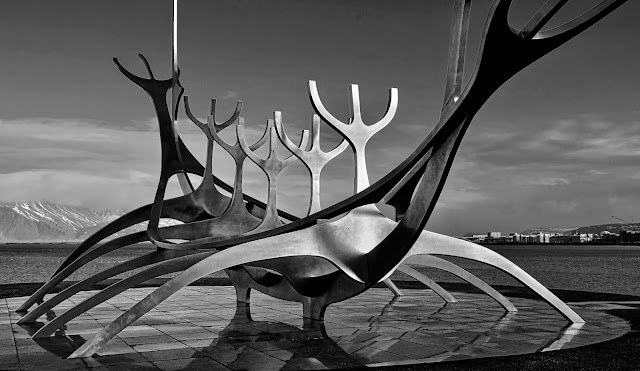 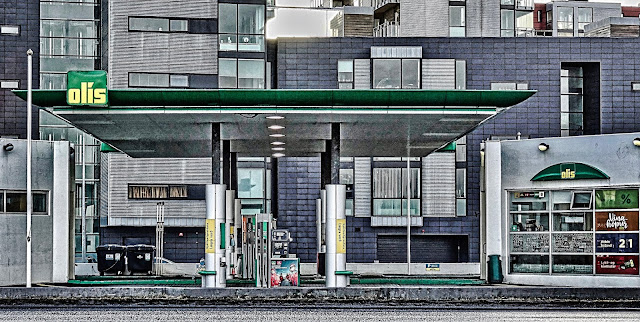