After Da'mit and I arrived home from Alaska, we started thinking about what changes or modifications we would make before our next big ride. That ride is fast approaching so this spring was mod time.

First, several times my left boot slid off the foot peg if my boot was wet or muddy. A safer, more secure foot peg was needed.  Mr Cob showed me the foot pegs he had installed on his rig, the Predator. He took dirt bike serrated pegs and welded them onto his Ural. Those pegs have a great edge to stop muddy boots from sliding around.  Besides non-skid pegs, I wanted something that would not allow my boot to slip off the end of the peg. The solution was to weld two pegs together with a steel ring at the end to stop side slipping.

This is the Ural factory peg that allowed my foot to slip off. 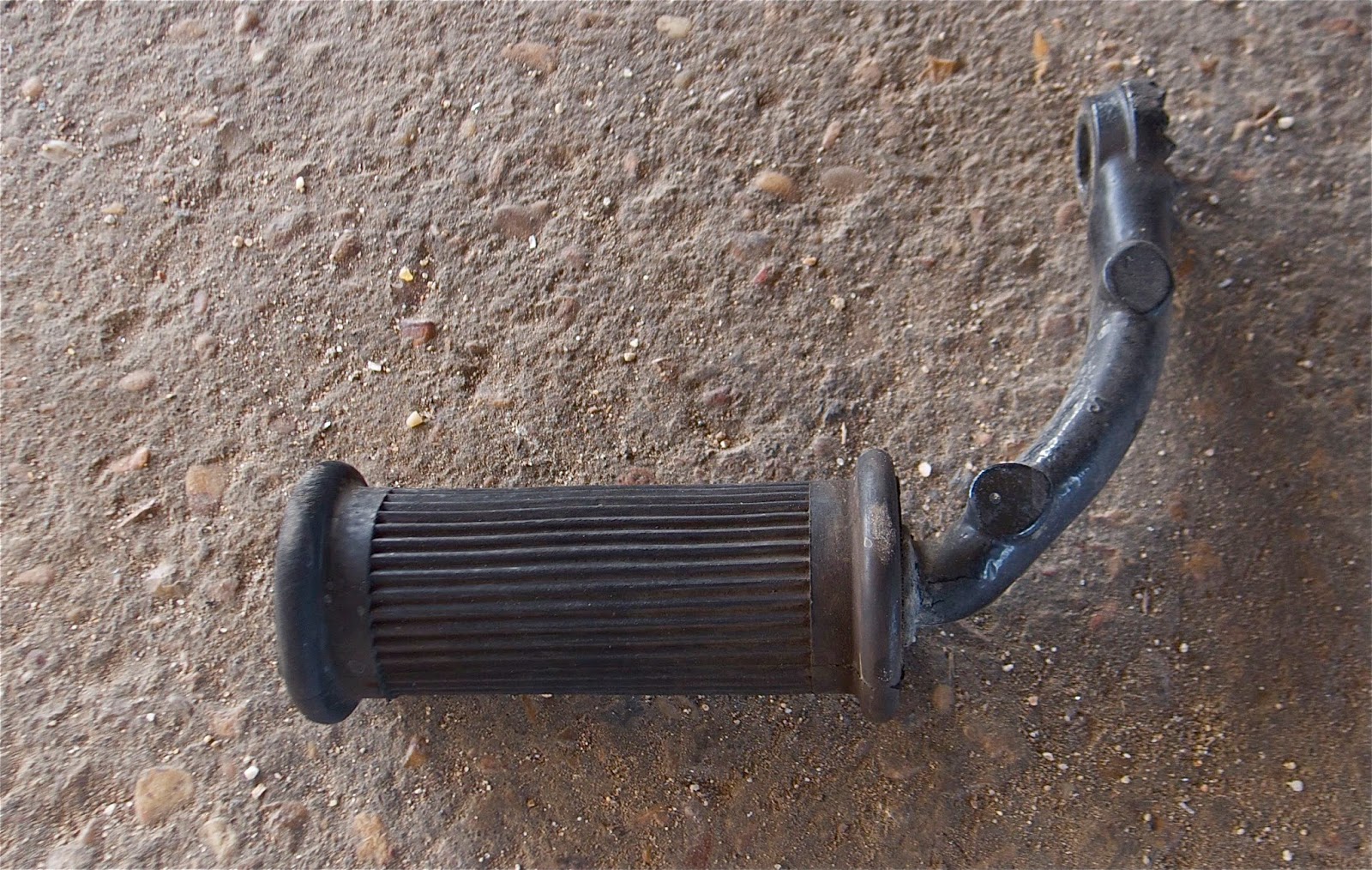 Here is the "NEW" modified dirt bike peg with a steel end loop and a reinforcing rod. My boot is not going to slide off this peg. The only drawback is I can no longer get my toe under the shifter to up shift, so back to heel and toe shifting. 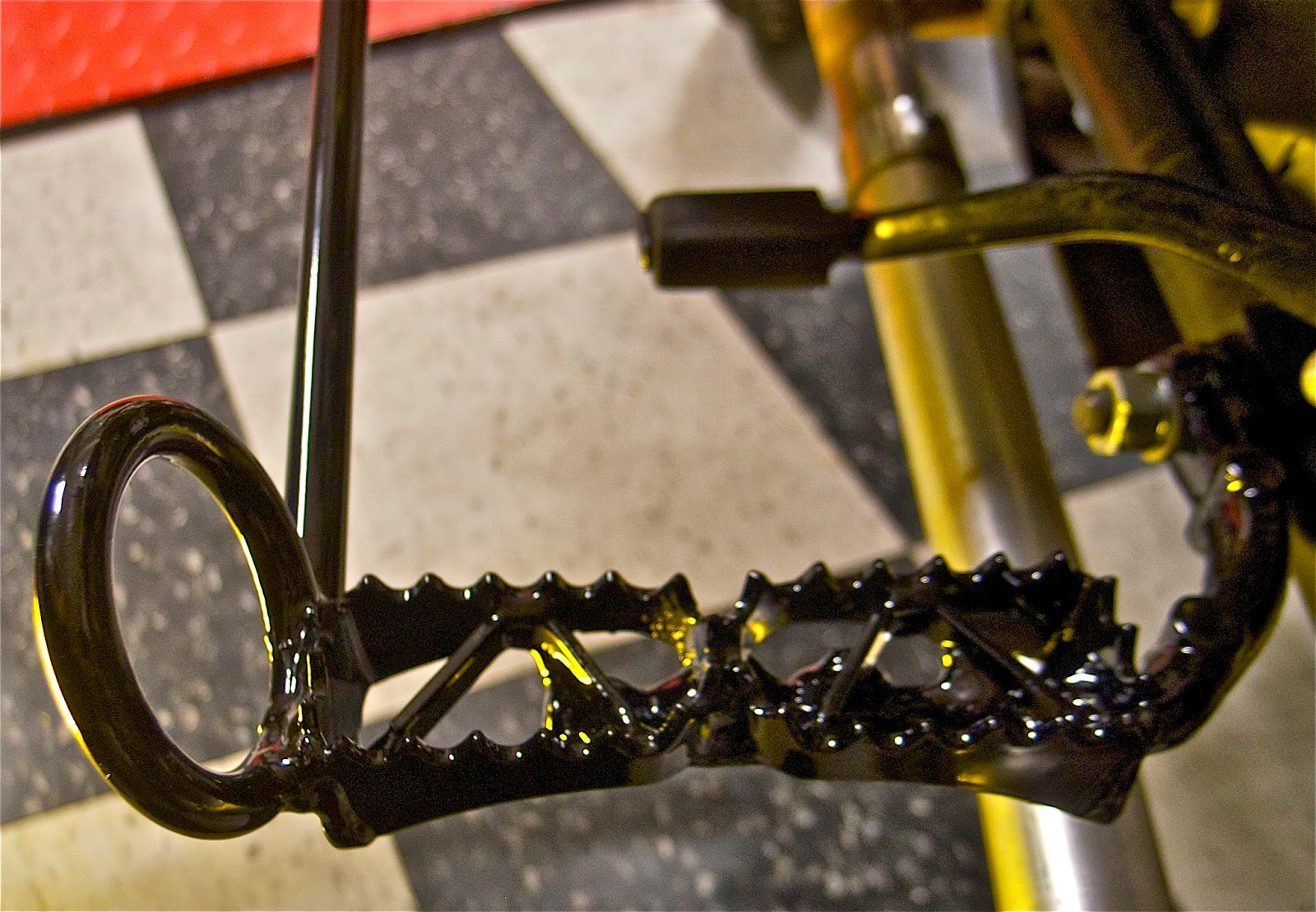 Next, replace the ammo can under the hack. The first can I used was waterproof and solid, but too small to hold the tool roll or the tire tools. A larger can was picked up at Army Command, the local military surplus store. 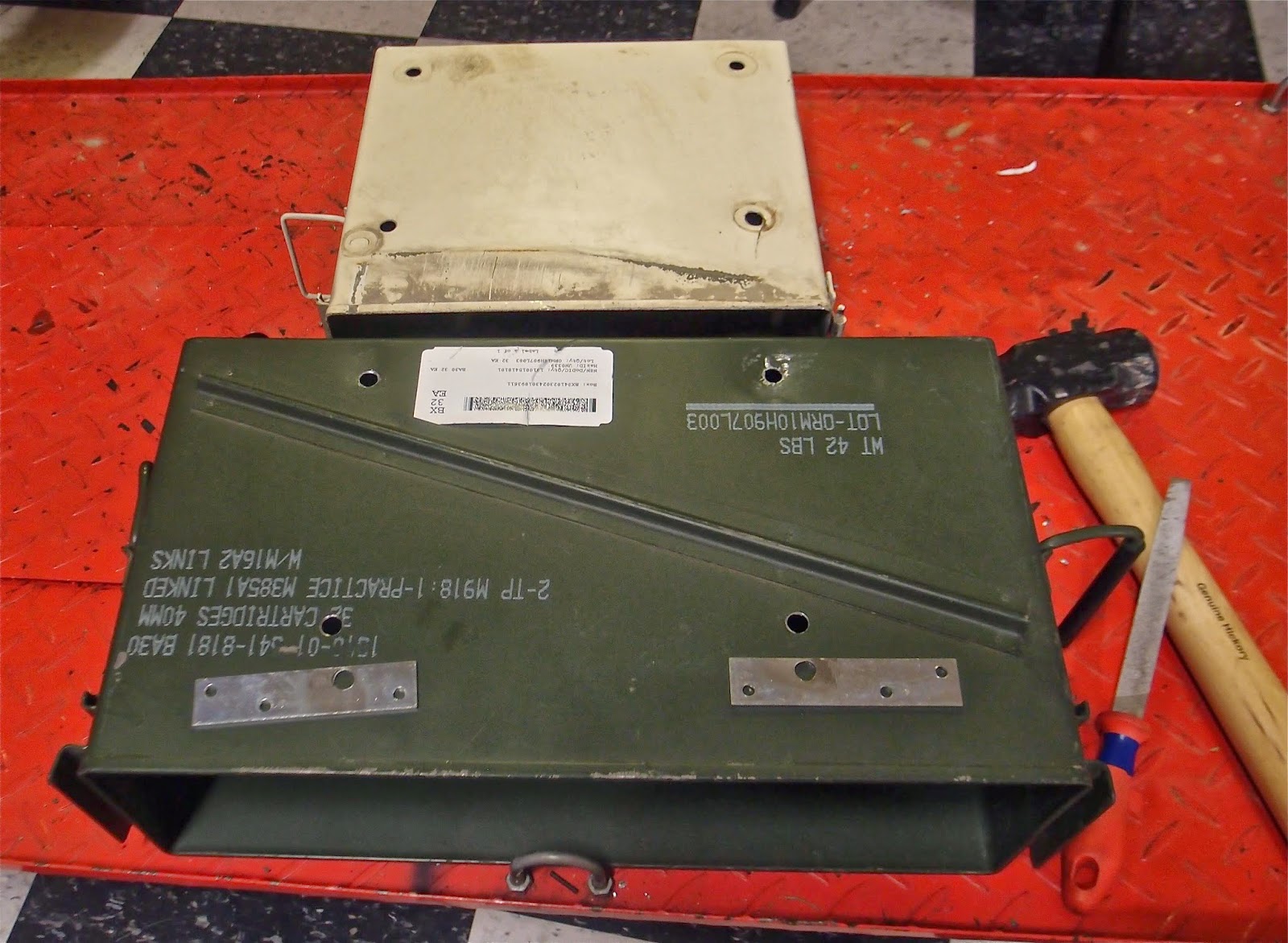 The larger can holds the heavy tool roll, a jack and several pieces of wood. Carrying the heavy weight down and low is good. No ground clearance was lost. Large fender washers were installed inside the tub to spread the weight of the packed large ammo can around. 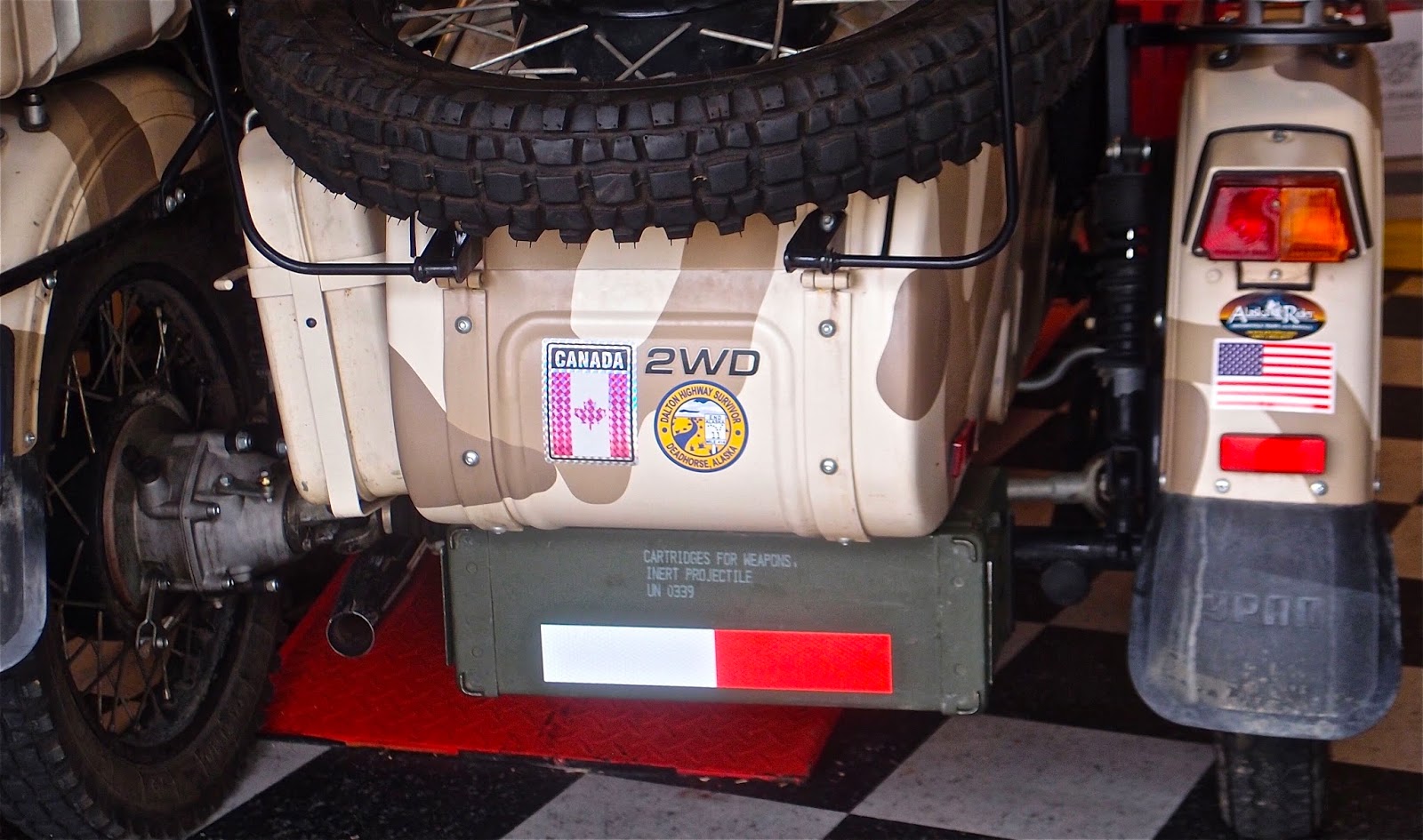 Next was to replace the stock Ural handlebars with a KLR or dirt bike type wide bars with less of a bend. The factory handlebar forces the wrist into an uncomfortable position for all day riding.

Then installed a CHT (Cylinder Head Temperature) gauge to go along with the RPM gauge.  The CHT is to monitor the head temperatures when riding. Air cooled engine are vulnerable to failure if engine temperatures get too high. Long uphill climbs or extended hot desert cruising without cooling off can cause serious engine problems.

From left to right: new wider handlebars, extensions on the mirrors so I can see more than just my arms, red ON/Off switch is for the auxiliary yellow lights on the sidecar,  round CHT gauge, Zumo GPS 550, orange SPOT on the dash, the RPM gauge and finally a remote to open the garage door at home. Out of sight behind the GPS is a hazard flasher switch so when making those long slow Colorado mountain pass climbs, I can alert drivers behind me. 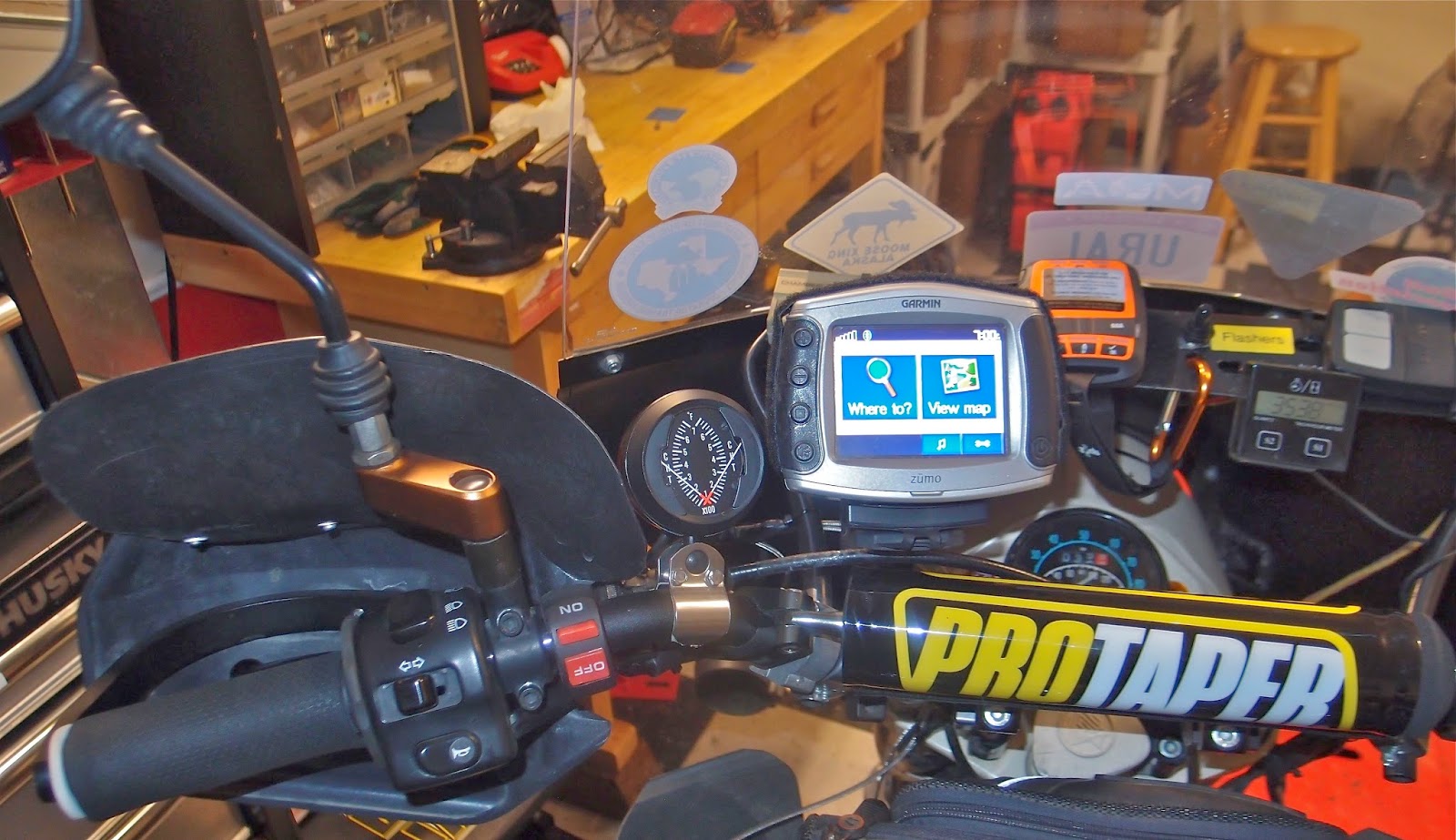 The last mod was to remove the shovel from the sidecar ( which I never used anyways) and mount a two gallon water can.  Besides carrying a Camelbak hydration system for drinking water while riding, the additional water is for cooking and cleaning while camping. 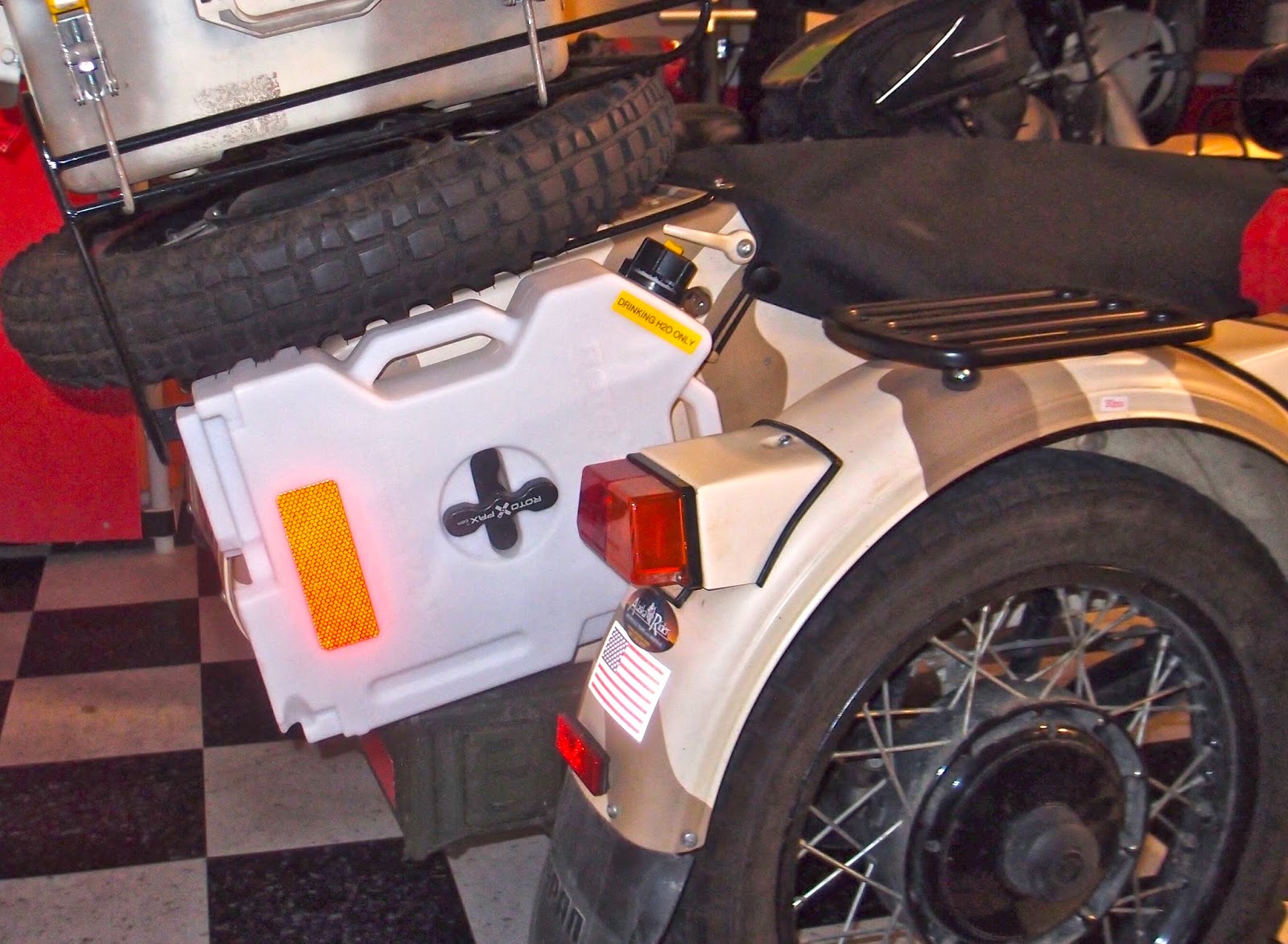 Finally as everything was coming together, we had a nice day for riding. Went out to experiment with the camera, trying some artsy photo shots.
Here is..... 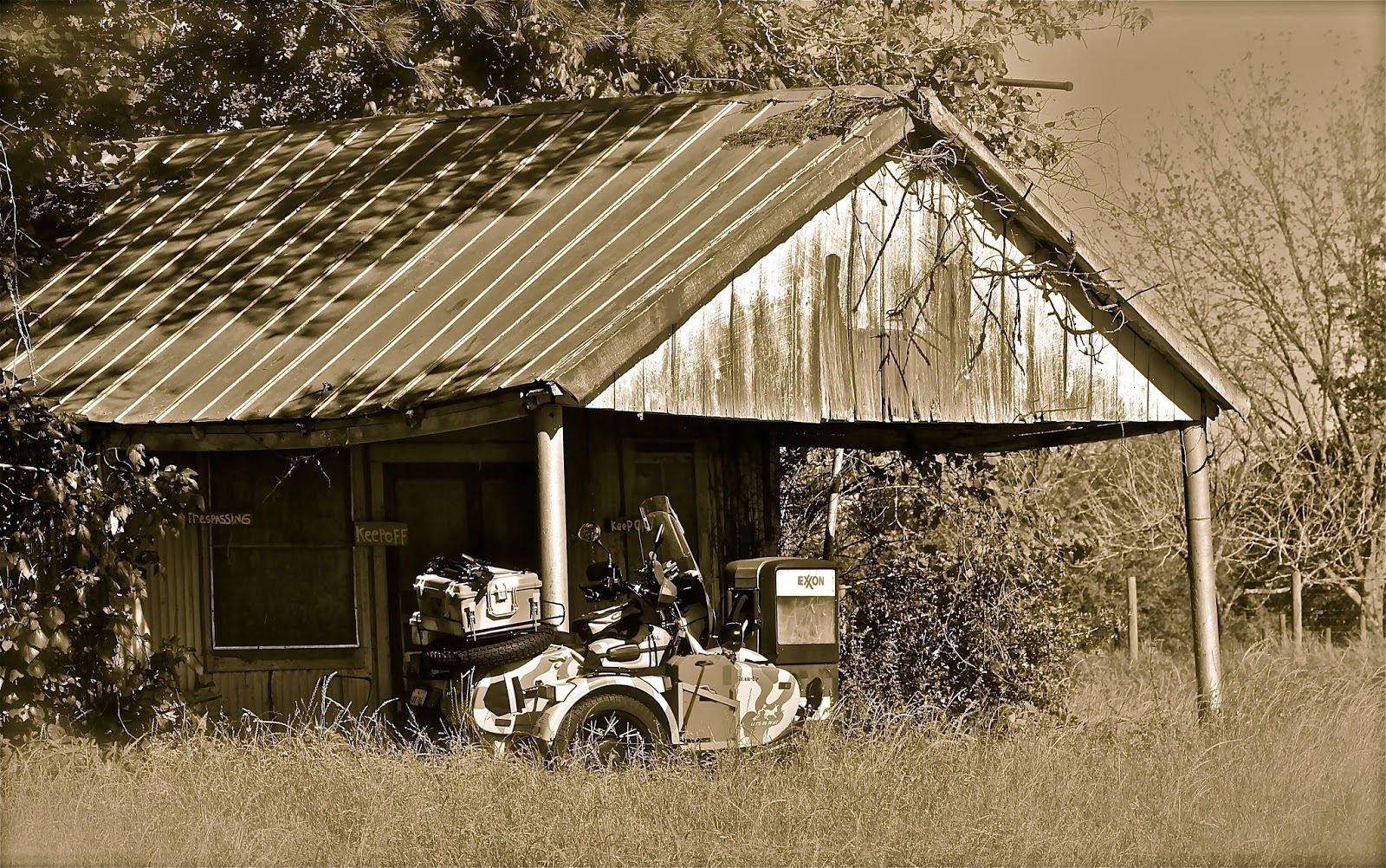 Da'mit is slowly coming along, getting ready for the next big ride which will start June 15th. The earlier May 18th departure date was put off due to a family wedding the later part of May.  There are two other Ural riders who have committed to making this trip: Muzzleflash and LokiBoy. More about that later.