After competing all the welding work for the racks, we moved the Warthog off the trailer and started working under roof in the garage.

Why the aux fuel cell?
All sidecar rigs are known to drink gasoline faster than two wheel motorcycles. Once this rig is loaded, I still have no idea how many miles per gallon to expect.

If you remember, the stretch of roadway from Coldfoot, Alaska to Prudhoe Bay is 245 miles with no services. Plus there is the strong possibility of headwinds causing even poorer gas mileage. I want to be carrying enough fuel for a 300 mile range. The main tank carries 6.3 gallons, the aux cell holds 5 gallons. If the Warthog can average better than 27 miles per gallon,  I will feel secure.
Won't know mpg for sure until we get it built out and road tested.

Look at those stout twin support tubes the engine hangs off of.
Triumph knew what they were doing when they designed the Rocket III for strength and rigidity. 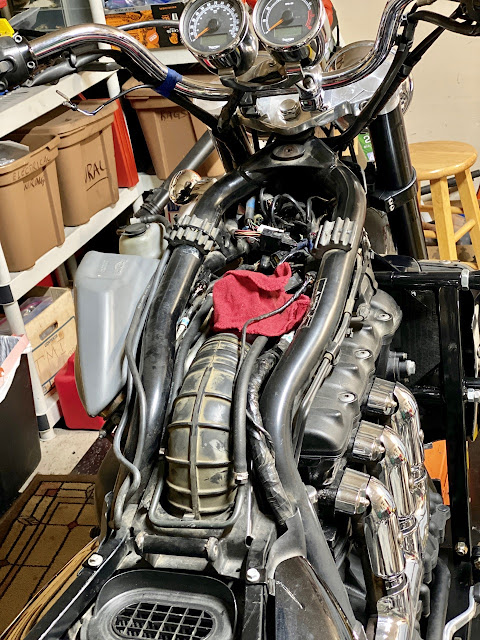 Draining fuel from the main tank was messy, even dangerous but neither I nor my friend Gary smoke... anymore.

Finally opened the main tank only to find rust and metal flakes. Further investigation showed, thankfully, it was not the main tank at fault, but the mounts used to hold the fuel pump and filter in place. 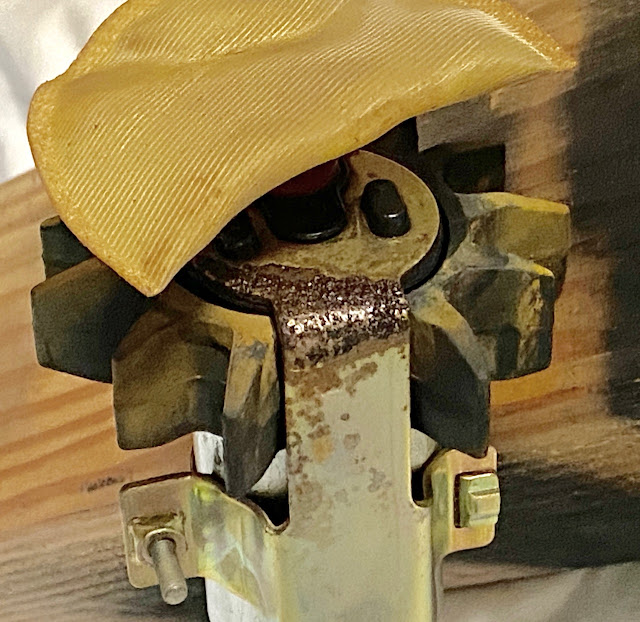 Exactly where I had planned to drill a hole on the main plate for the aux fuel inlet was corroded. That would not give us a secure drip free fuel connection. So ordered the OEM plate and arm for the fuel pump and filter. To arrive in a couple of weeks. 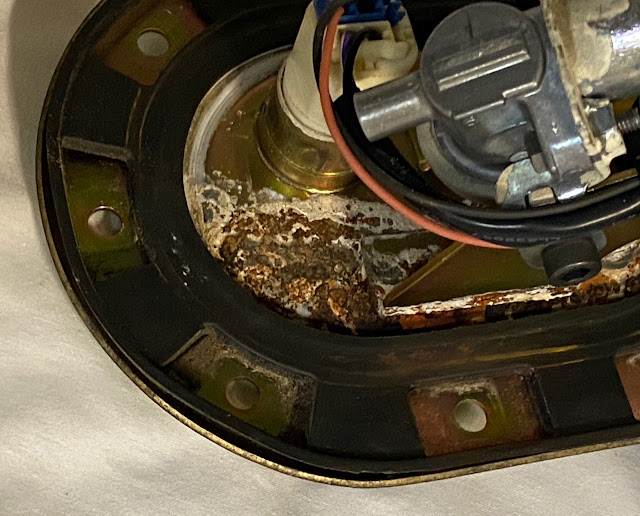 Next had John Klien my welder/friend fabricate a mount for the left side pannier. Good solid steel. One thing we do not have to worry about with this build is weight. The Rocket has so much hauling capacity, we can go stout, weight be damned. 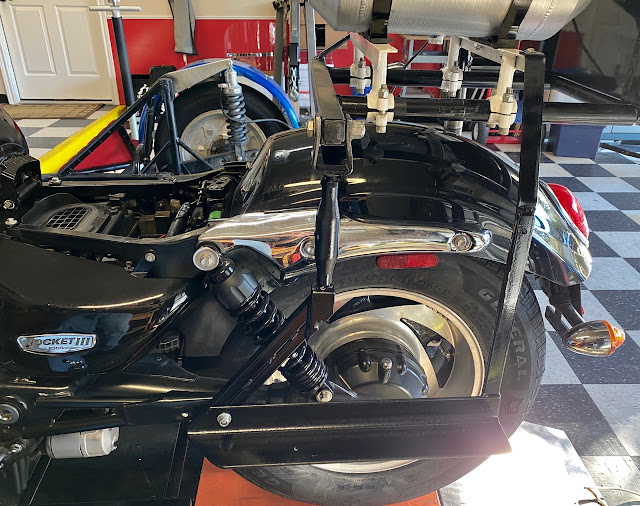 The side pannier sticks out too far when working on the rig in the tight confines of the garage,
so will wait until later to bolt on the pannier box.

Recycled the left heavy duty pannier from the Vstrom1000, kept the old stickers. 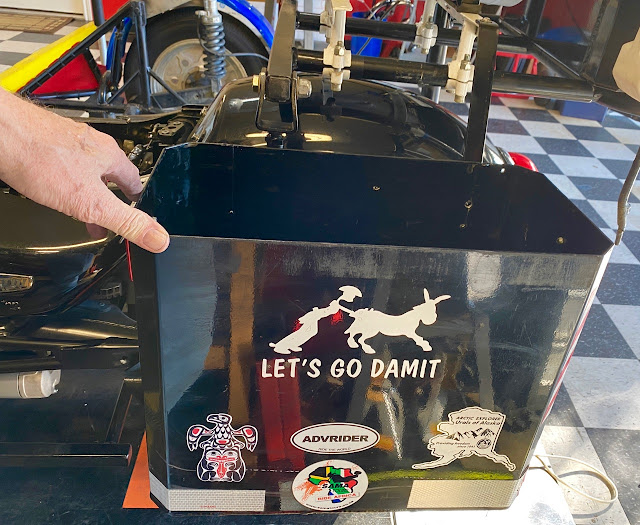 Stand by for a slight lull in the build, while we wait on several replacement parts to arrive.
*
*
*

Ride safe and far my friends,

The Texas Sidecar Company wrapped up their end of the project, time to bring the Warthog home to continue the work building my three wheeled adventure RV sidecamper. 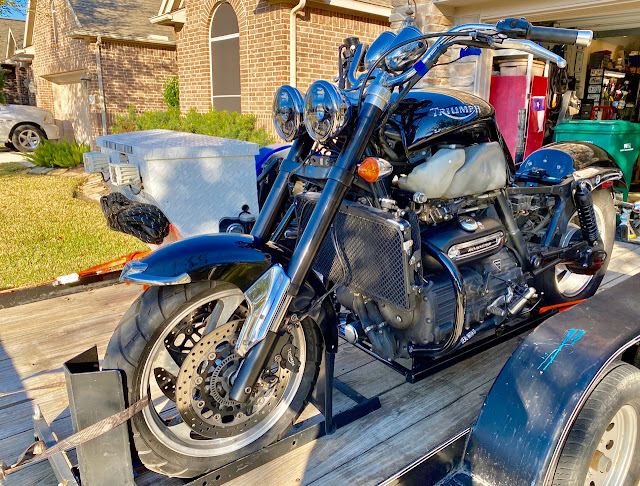 The left side of the Rocket shows where the sub-frame is mounted in three spots: top, middle and lower. The latter two are bolted through the engine giving a very solid mount. 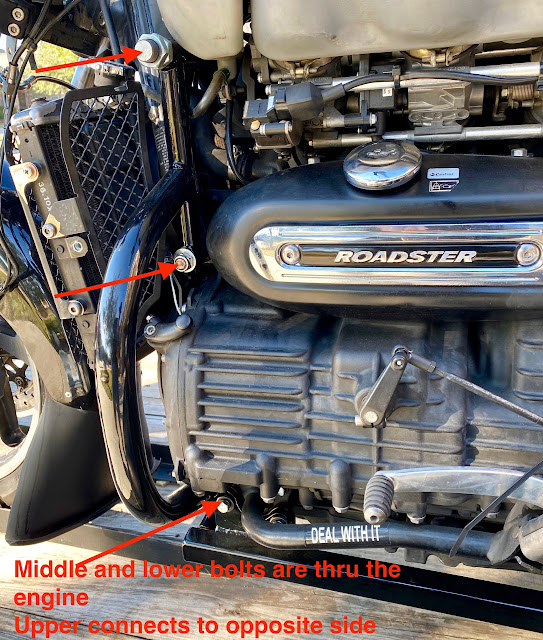 On the opposite side, the vertical upright is connected to the top cross over pipe, the middle engine bolt and to the lower subframe. Two upper struts branch off of the upright. 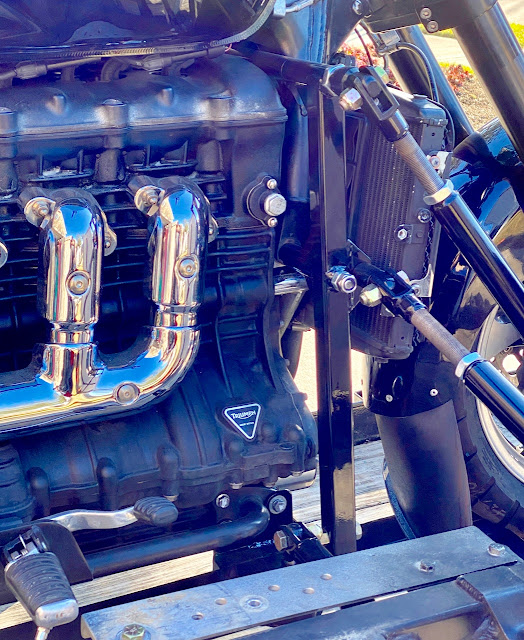 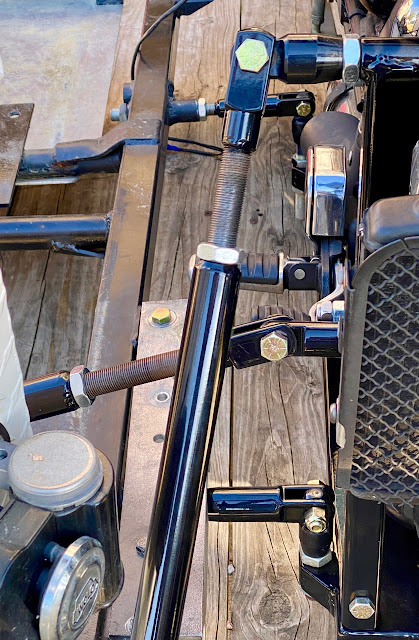 The two lower struts are adjustable both horizontally and vertically.  The lower bolt was left long until we make the finally adjustments with the rig fully loaded. 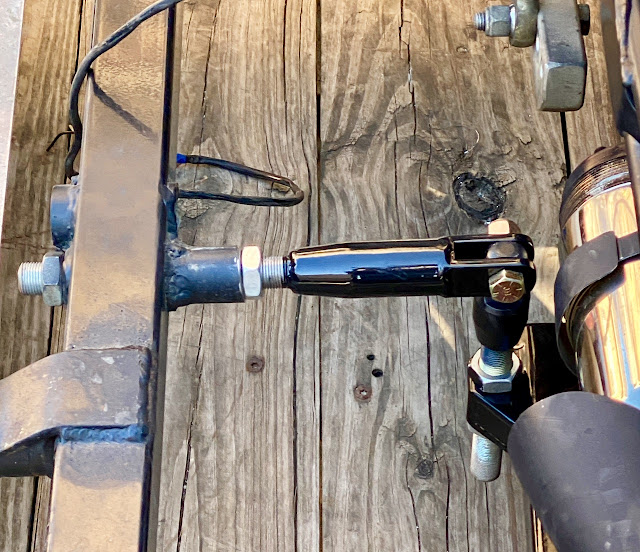 All of the upper and lower strut ends are double shear for strength.
Texas Sidecar did a great job making this rig solid and stout.
All in preparation for another ride from Key West, Florida to Prudhoe Bay, Alaska. 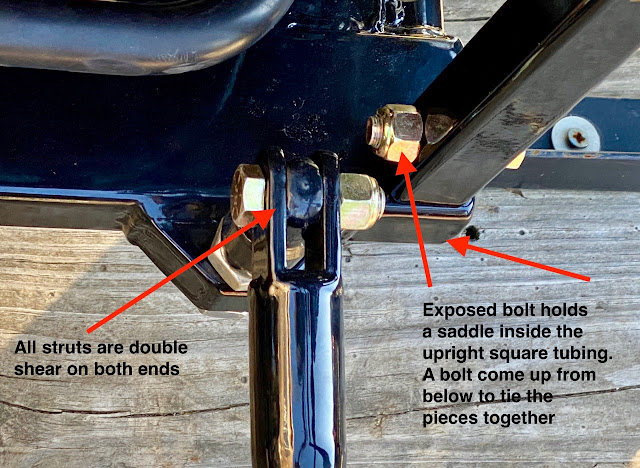 Mounted the auto battery box, then wired in the Odyssey car battery to the Rocket. 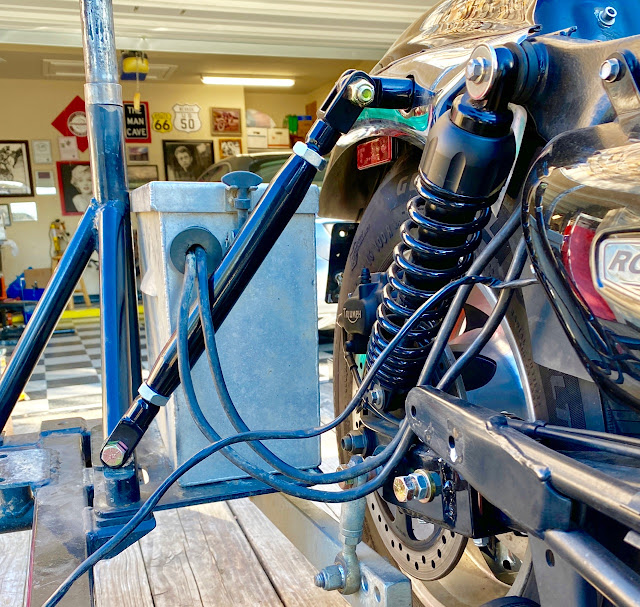 Kept the weight of the car battery low and inline with the rear axle. 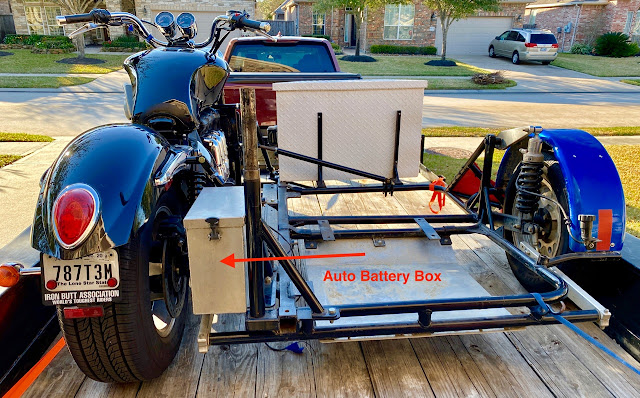 Next was to modify the rack for the top box and aux fuel cell.
Cut and weld till everything fits. 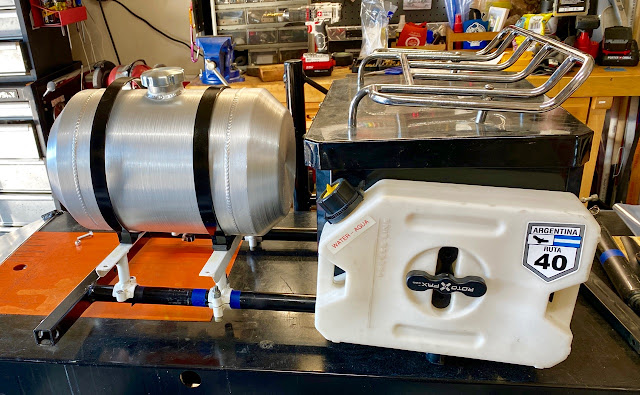 The five gallon spun aluminum fuel cell has baffles inside to prevent fuel sloshing. The previous tank have an anti-slosh foam, which disintegrated in Canada by the fuel additives... ethanol?

The tank in mounted off center but inline with the center of the rear fender.
Thinking is this might make a good spot to attach a backrest. 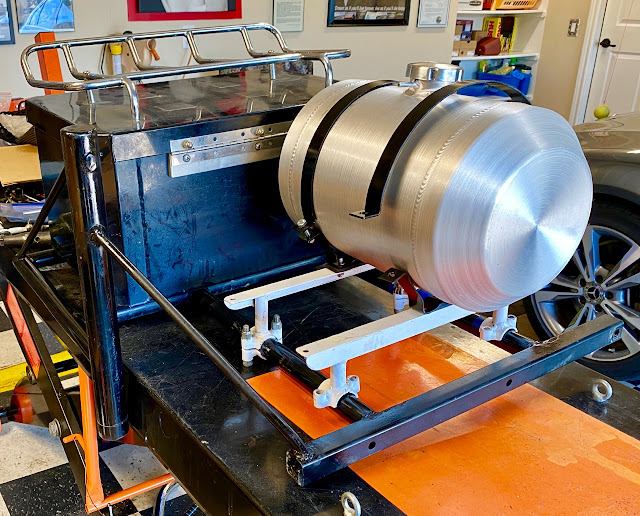 The Warthog project will continue...

Went with several members of the photography club to see what we could find in the trail riders staging area before the start of the 2020 Houston Rodeo parade. There are so many photos posted of the parade itself, I wanted to meet the riders who have spent the last ten days or so on the road, riding horseback from all over Texas to the annual rodeo gathering.

The leader of this group had to ask directions... so horses waited. 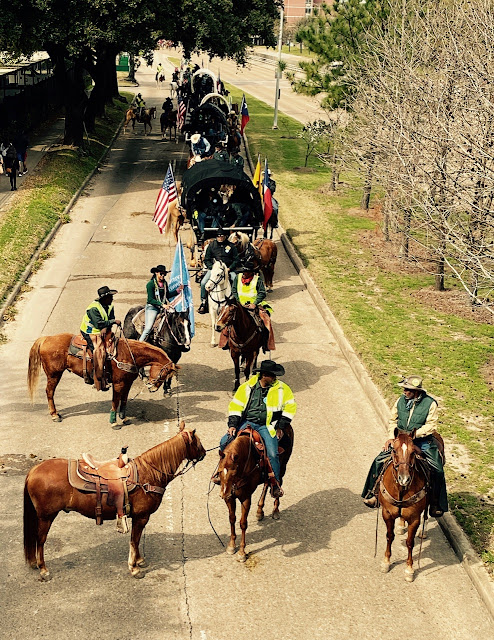 Riders were young and old. When the seat gets sore, give it a rest 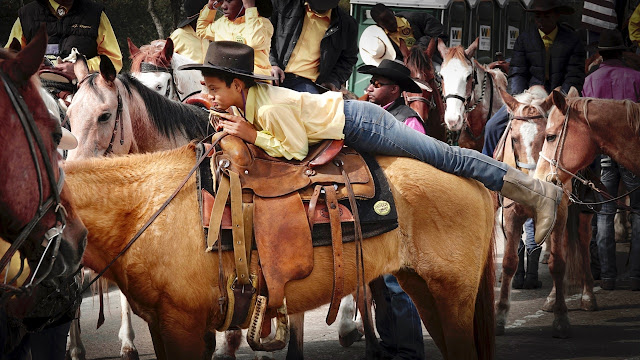 Carlos, eight years old, rode from San Antonio to Houston, camping with his family every night.  Best education a child could have, learning responsibility, caring for his horse, enduring the elements and sharing the work load. 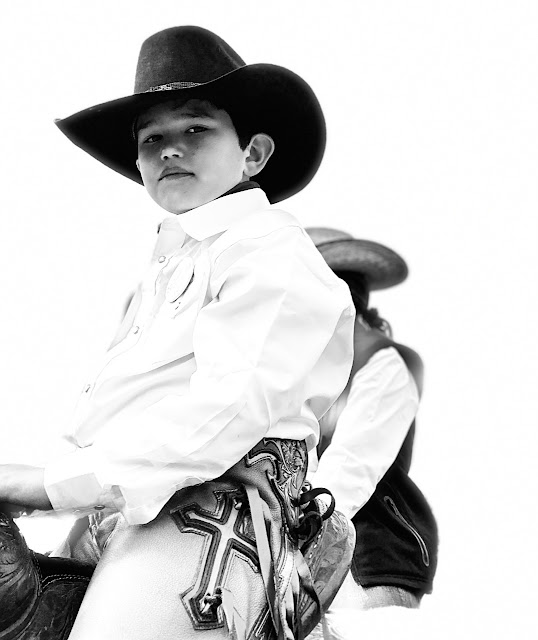 Dave was a bronco buster in his youth, trying to retire but still a working cowboy. 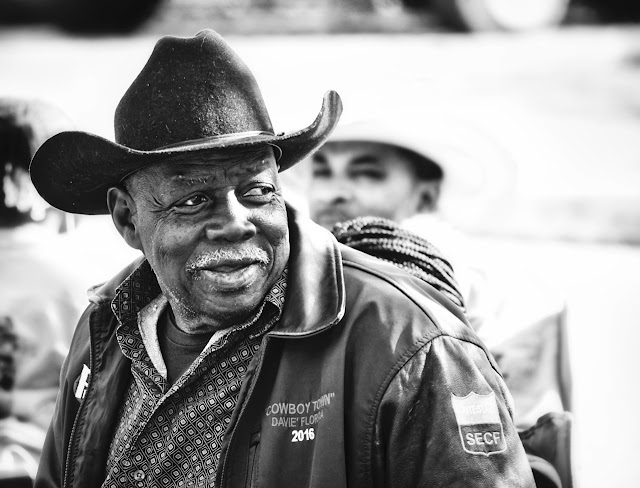 Curtis makes the trail ride every year, now to remember a departed friend,
the memories they shared. 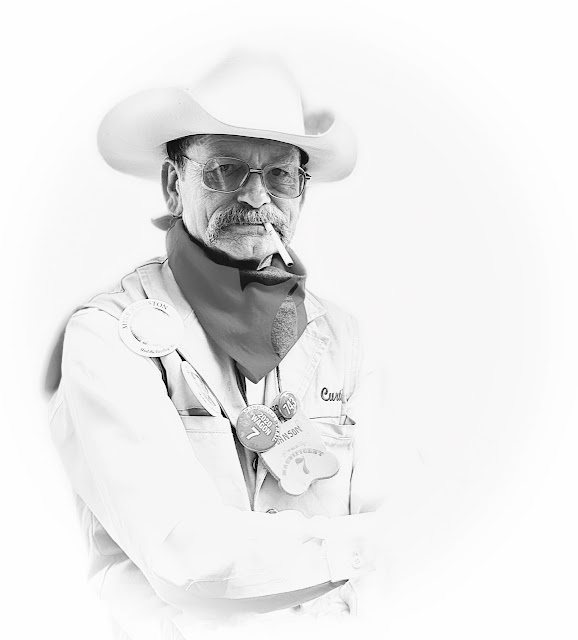 The details of the rodeo riders captured my attention. The designs in the chaps... 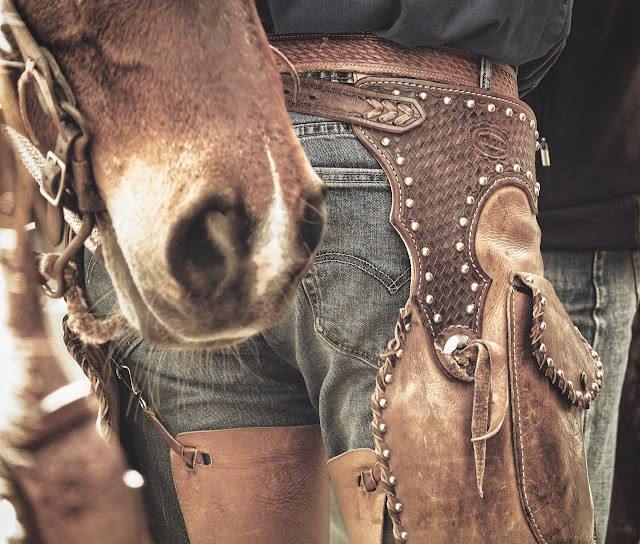 ... the turquoise belt and worn jeans. 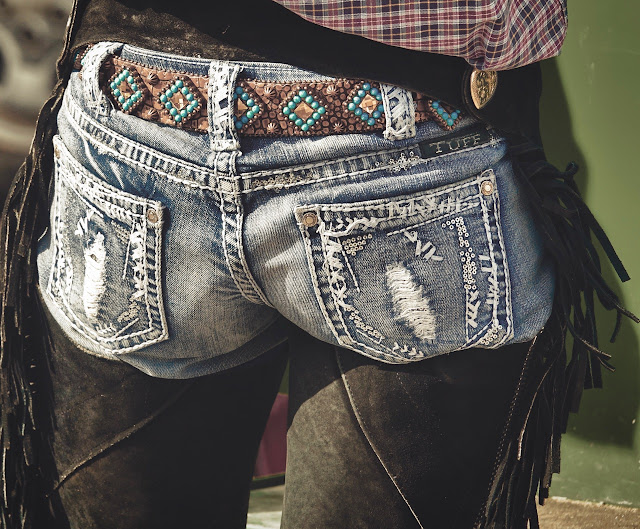 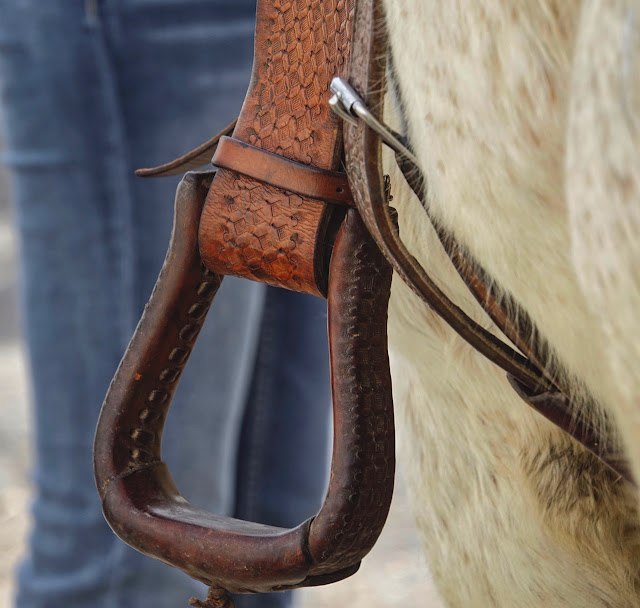 Of course, the scale of the Houston Rodeo is immense, with daily attendance in the thousands.
This annual show will continue on for the next week. The arrival of the trail riders signals the start of it all.

From my point of view, the riders who have come here, riding in rain or shine,
are the most interesting and least commercialized part of it all.
They keep the old west tradition of riding to a rodeo, alive.
Their gear is worn, the horses are tired, the riders are real.
No drugstore cowboys here.

Ride safe my friends, see you on down the road.