Left Angel Fire at 7:30 am, riding US-64 across northern New Mexico to Chama, NM. Stopped at the Brazos Bluff turn out for a quick snap shot. In the dark timber behind the rig is where I experienced my first elk hunt. The guide called in a young rag horn bull elk so close all I could see was fur in the rifle scope. Didn't know what part of the animal I was looking at, so I didn't pull the trigger. What a thrilling experience though. That got me hooked on elk hunting and elk conservation. Have returned to New Mexico to hunt elk several times more. 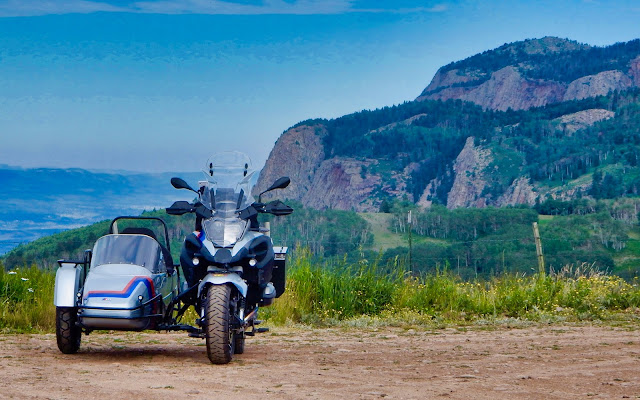 From Durango, Co, I rode north on US-550, the Million Dollar Highway. This route has been on my bucket list for many years. Why I picked a Sunday to ride it though... a big mistake. Too many tourists, too many Sunday riding motorcyclists, too many jeeps, too many tourists with the camper trailers... yet beautiful country. 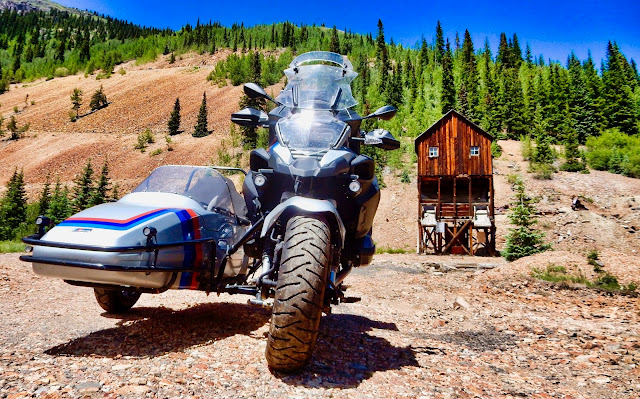 Had to wait a bit before I could take this photo without all the traffic clogging the highway. 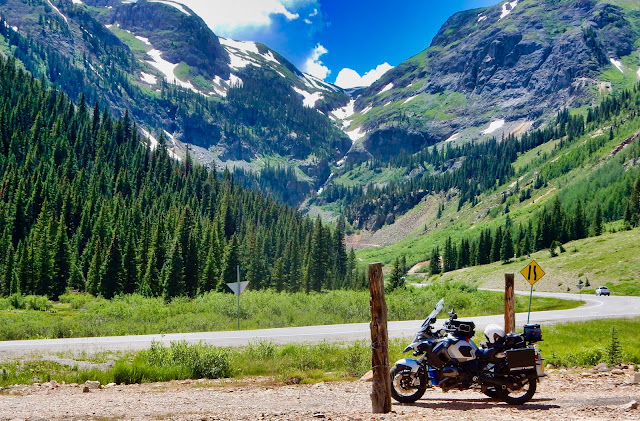 The hills are alive with the sound of...
eighteen wheelers, motorcycles, jeeps, RV's, crotchrockets, minivans pulling camper trailers,
did find a quiet spot to take a photo of Big EZY in the mountains of Colorado. 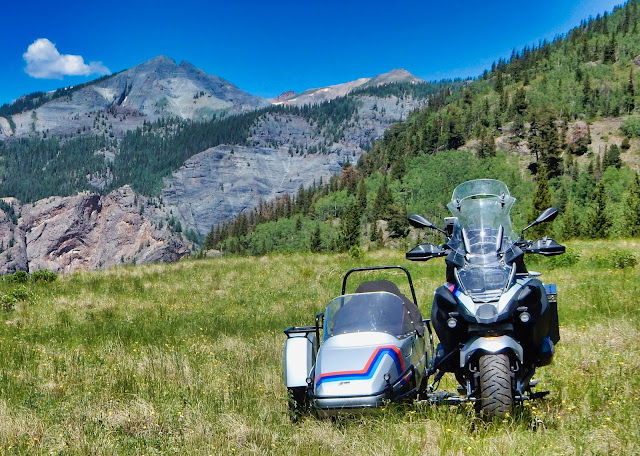 Monday July 22nd, Day Two on the road to Idaho.

As Granddad said, "We're burning daylight. Lets get going." Was 100 degrees when we arrived in Grand junction last night. Awoke to a cooler dry 60 degrees to start to the day. 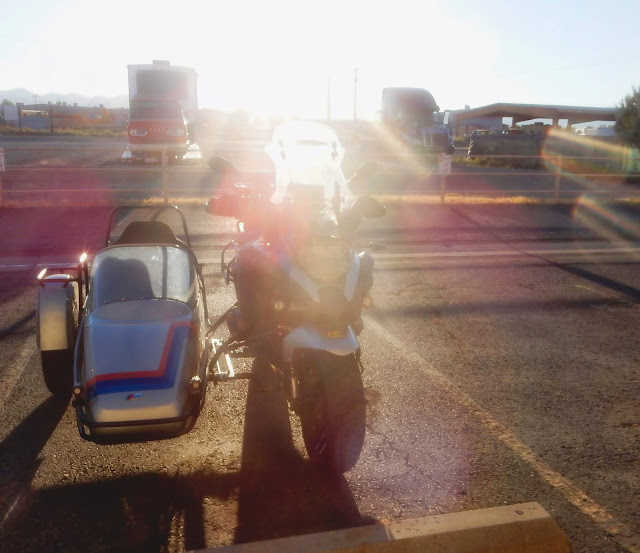 US-139 north out of Fruita, CO. Nice quiet road. No tourists or eighteen wheelers clogging it today. Still seeking out the two lane roads, avoiding the Interstate highways if at all possible.

Looking back, rode up from that valley below.

Stepped to close to the edge, accidentally kick a loose rock and started a small avalanche... was going to yell SORRY to those below but then realized the echo might cause a rock slide behind and above me! 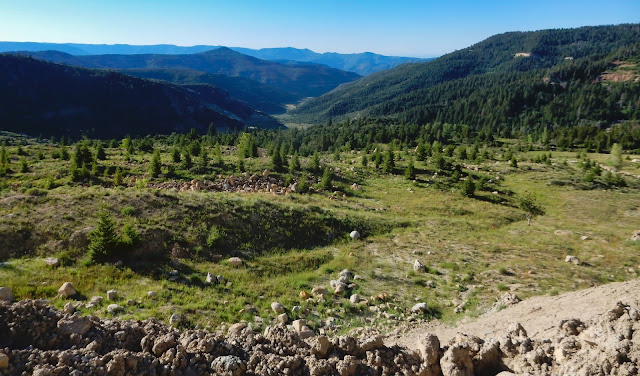 Now who did that???  Nobody here but that masked stranger... with a volleyball on his head. 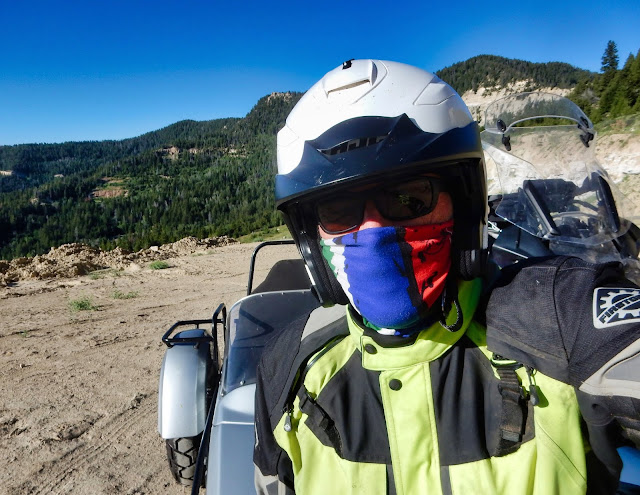 Crossed the Flaming Gorge Dam, stopped to look back and snap a photo. Noticed that the people working there had sidearms. Many roads across dams in the US are now closed or diverted when possible for security reasons. Things changed after 9-11.

The rain clouds are gathering... better decide when to put the rain gear on. 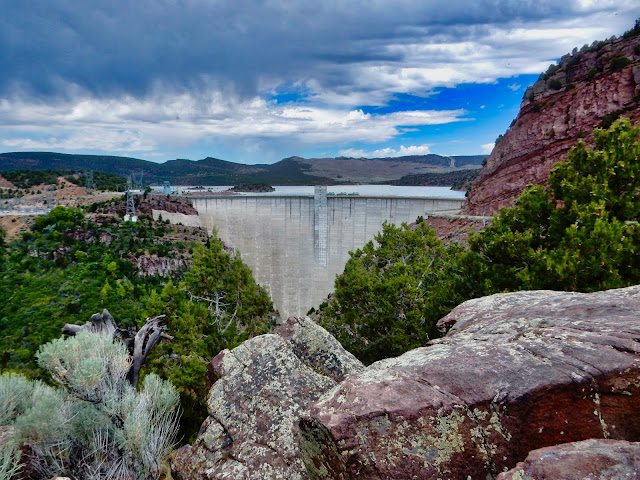 Stopped to eat lunch with a Walmart ham and cheese sandwich at a turnout in Wyoming.
Overhead dark rain clouds rolled in from the west. The smell of rain filled the air.

But the rain gods took pity on me.  After passing overhead, they dumped their rain to my east and not far from where I was standing. 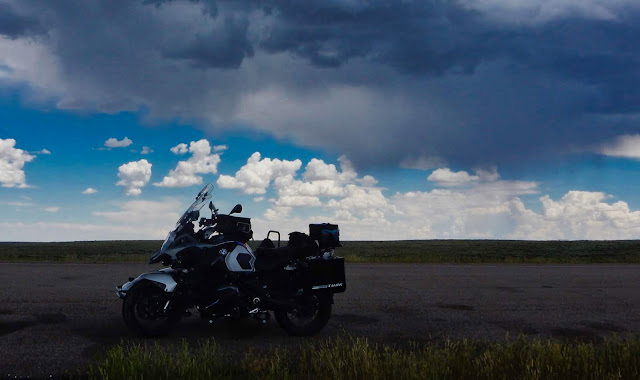 What I took for pity was just their toying around. An hour later the rains and pea gravel hail found me in the wide open road with no shelter in sight.

One does not see a log church very often. Here is St Hubert the Hunter Church in Bondurant, Wy. which is in the Bridger-Teton Wilderness Area. 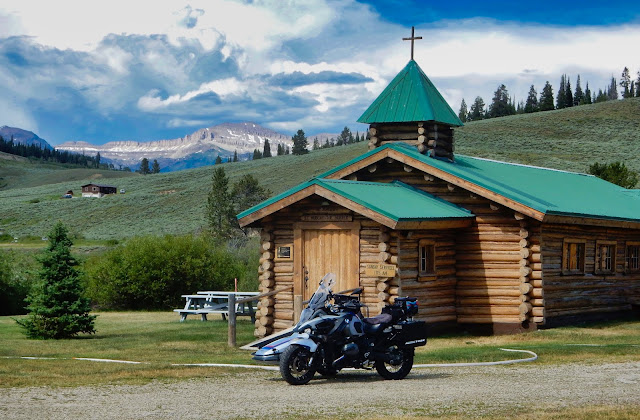 This big critter stopped our travels for a minute or two.

Me?  I laid still on the ground hoping it was not a meat eater (I didn't want to get mauled) or an amorous lover of sidecars.

Big EZY felt small for a change. Where is St Hubert when you need him? 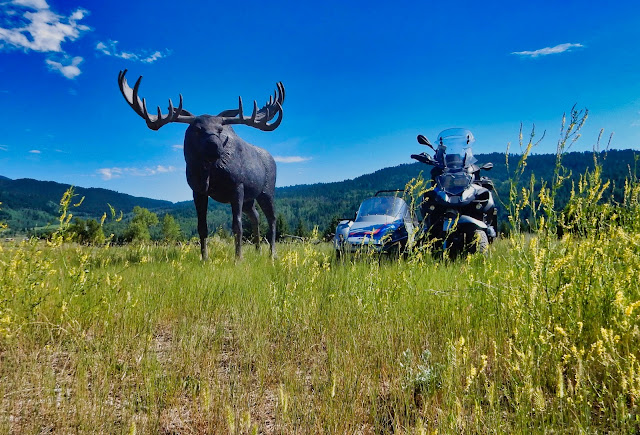 Low point for the day was not the cold, or the rain, or the hail stones, but snail crawling pace of traffic into and out of Jackson, Wyoming, the doorway to the Grand Tetons and Yellowstone National Parks. Bumper to bumper tourist traffic had the only road tied up with vehicles moving slower than a two legged turtle.

Finally made Victor, Idaho for the night.

On the road by 7 am, rode down to Idaho Falls then across the sagebrush lands toward Boise. Could have taken the faster route, but that would be the boring interstate highway which I try to avoid.

Abandoned little house on the prairie...
the windows and doors are gone, hopefully were recycled into a new home. 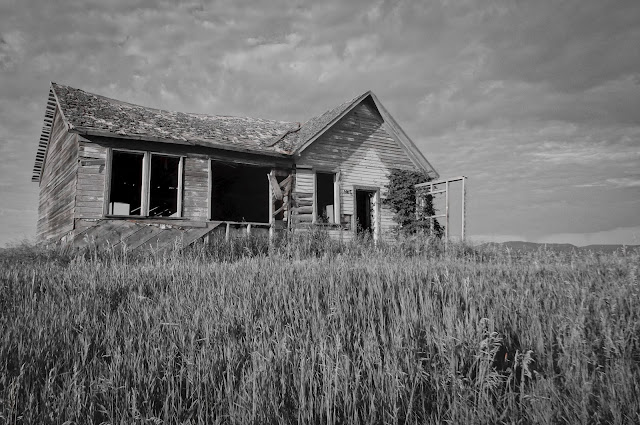 I've stayed in worst places, though I can't remember where or when.
Hmmm, sounds like a country song. Rain clouds not far behind. 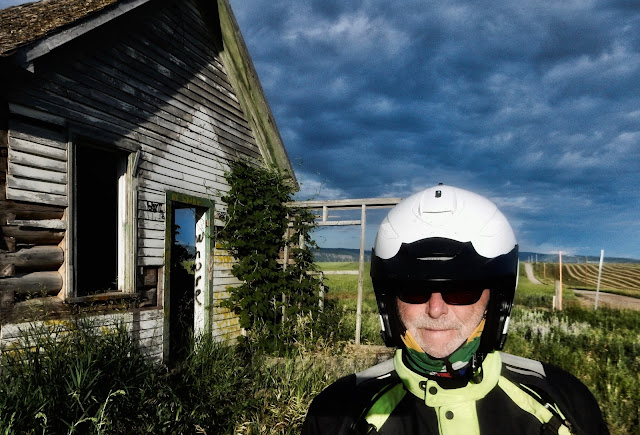 Route 55 follows the Payette River north from Boise.
The locals say this is some of the best whitewater rafting in the state. 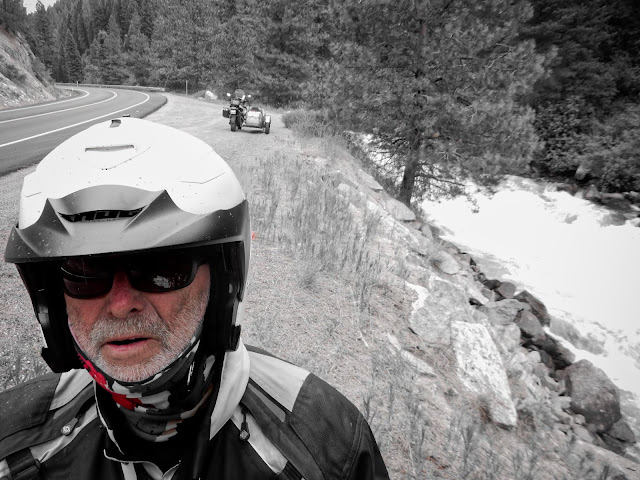 A young man told me this particular spot is called Ball Buster because those two large boulders have caused more pain, even killed a few kayakers here. Is a recipe for a disaster trying to go between the two rocks. The fast changing current directions, eddy and deep hole have flipped many a kayaker.
Said stick to the near bank and you'll get thru okay. He is young, I'll take his word for it. 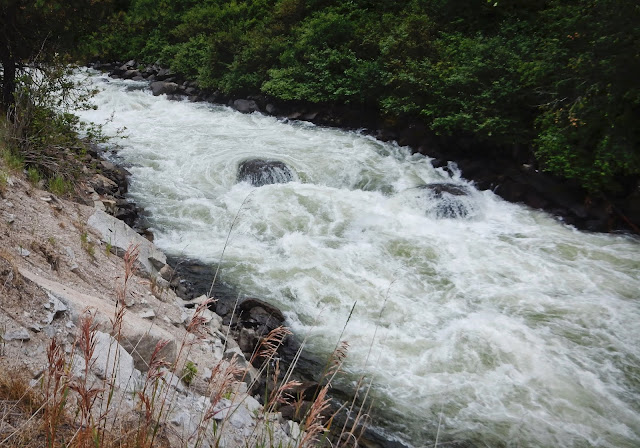 Stopped in Riggins, ID to recreate this photo, same as one I took a year ago when passing thru with the sidecamper rig. 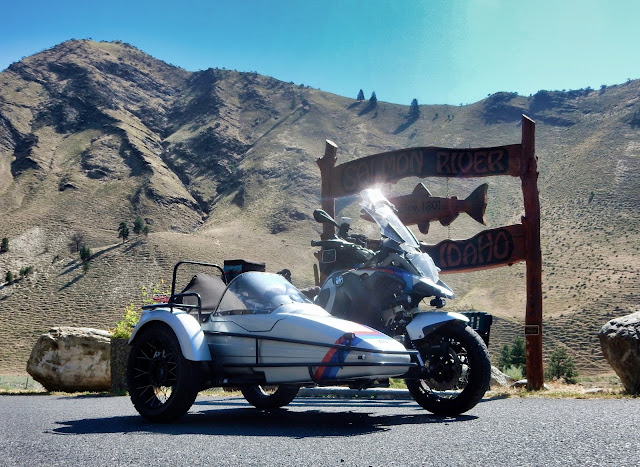 Riggins is the whitewater rafting center for the Salmon River.  Stopped at an overlook to watch as a group of rafters try their luck with the rapids.

They make it through. Would be bad for their tourist business if they didn't. Look like fun though.

This raft got caught going in sideways, created quite a splash of water that came into the raft,
but they made it through without flipping over.

Is that two legs sticking up in the front of the raft?
Aaaah, memories being made. 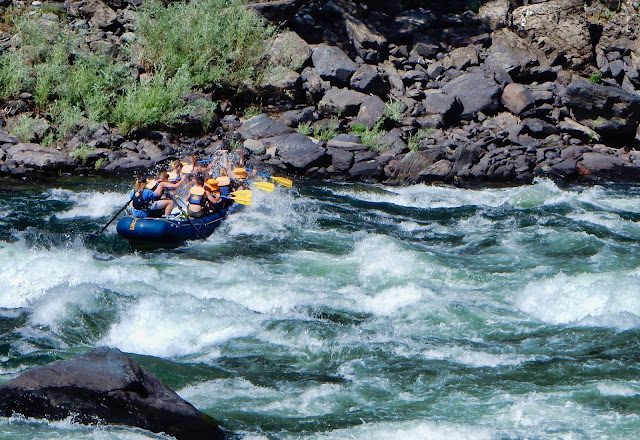 Approaching Lewiston, ID decided to try a road less traveled.  Route 3 angles up northeast east, coming out near Coeur d'Alene.
Big EZY and I rode long undulating straight aways among field after field of wheat and barley. Broad fields separated by the deep green spruce canyons coming down from the north. 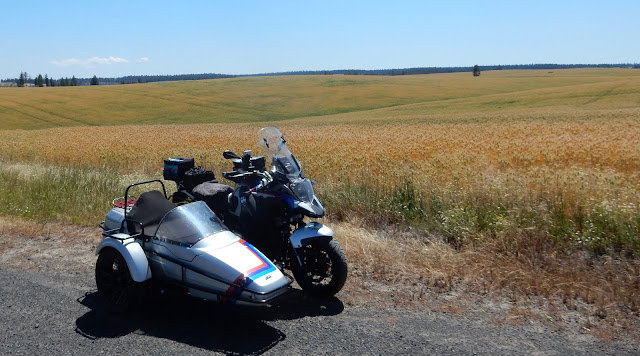 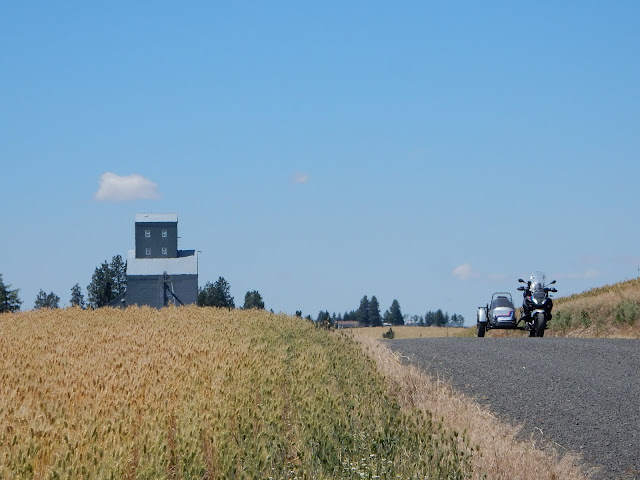 On this trip we encountered a few critters, mule deer, elk, whitetail deer, antelope, coyote, skunk,  only one bear... 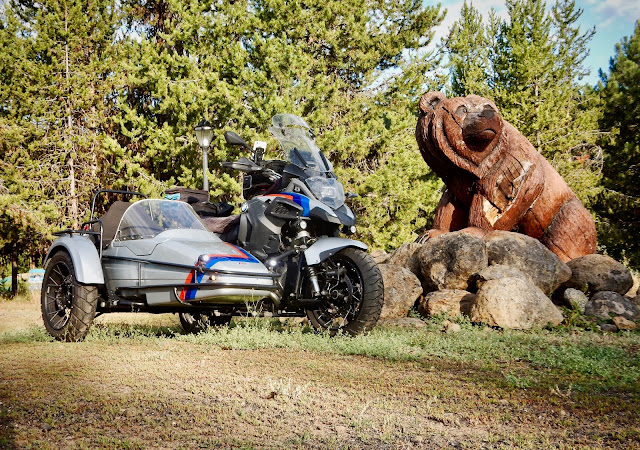 After riding 1,592 miles, Big EZY and I arrived in Coeur d'Alene, Idaho. Will be here for the next three days, volunteering at the gathering of sidecarists from around the country.

My friend/neighbor Harry and I joined a Houston area photography club earlier this year. The group meets twice a month, for technical training and for print photo competition. This months technical session was on studio lighting. Most amateurs cannot afford nor justify the large outlay for quality studio lighting. Especially since we take most of our photos outdoors.

The club begged and borrowed a half dozen professional lights, invited a few models to come sit, then turned us loose to practice and learn how the various lights affect the final image. 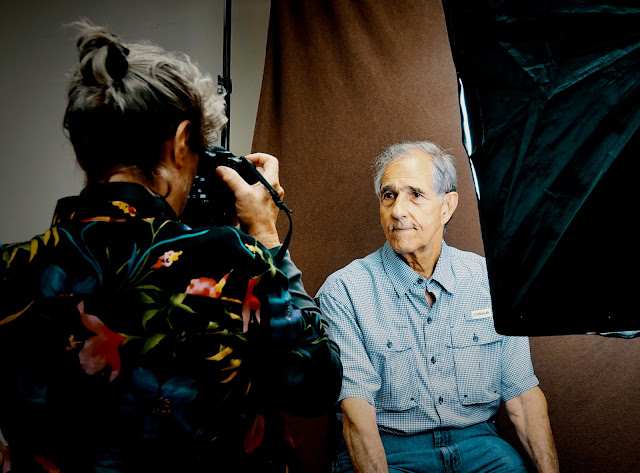 Some joked and prodded the models, others asked the model to look up, look down, left,
right, smile, don't smile, do this, do that...

I watched, listened, clicked the shutter button a few times. 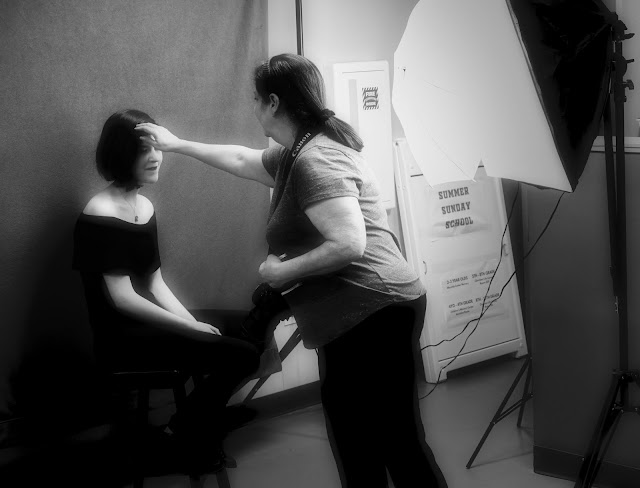 A few club members posed in front of the lights while the models were busy elsewhere. 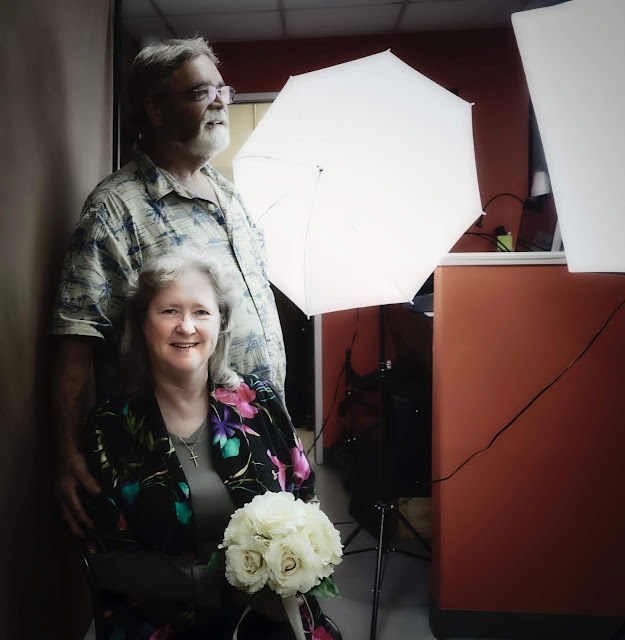 Me... am not model material... ,
nor do I enjoy taking portraits.

So I did what I do best, took street photos of other people doing what they do.
In this case, snap photos of photographers taking photos of models
who pose for photos by photographers.  (say that five times without stuttering).

I found the interaction between the photographer and the model to be an interesting dynamic. 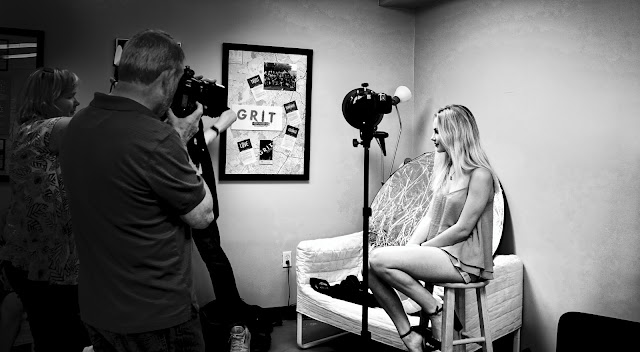 Had a total of four or five models. Some children, some grandchildren of club members. 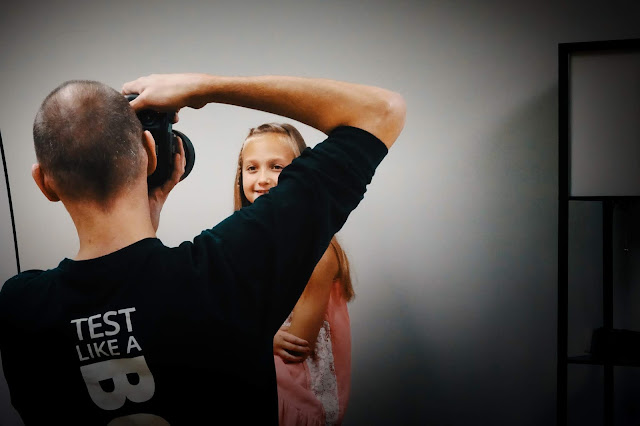 This shot was difficult for me to achieve the desired relationship in editing. Faith, the model on the far right would look to her mother on the far left for support. When two or three people are pointing big camera lens at you, telling you to do this, do that, etc, it can be unnerving to a young person.
.
The two would look at each other, mother calming her daughter while ignoring the noise
and activity going on in between them.

I wanted to show that link, the connection between them in spite
of being on opposite sides of the photo.

Had to fiddle awhile in editing to gain something. It's all a learning process.
Learned something new to apply in future situations. 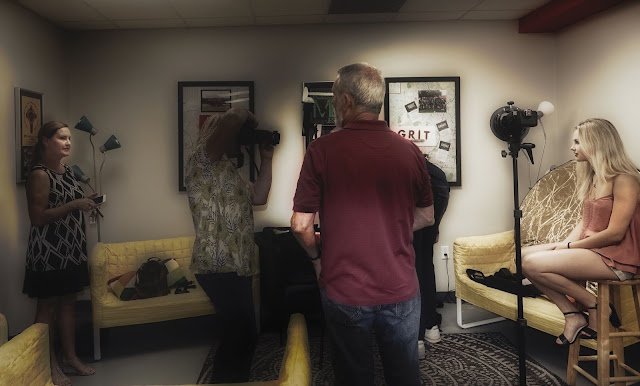 Between shots, Faith would quietly wait as the shutterbugs tried to figure out their light meters, set apertures, fiddle with ISO, swap lenses, adjust lighting, etc. etc. She is very poised, learning to model, a volunteer too. 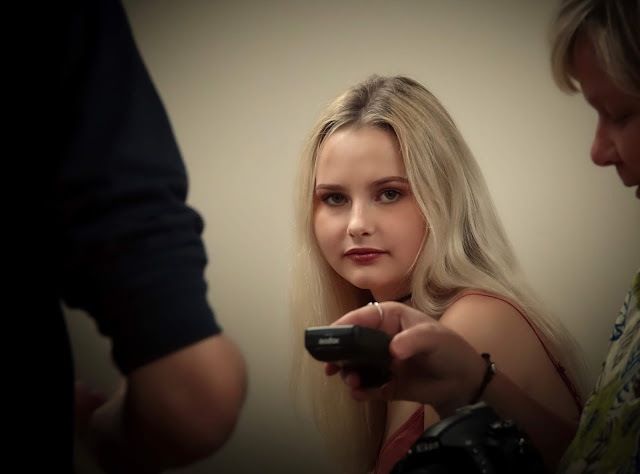 In the end I did snap a few shots that could be considered portraits.
Took them home and played with some portrait settings with photo editing software.

Here is Faith... with a glamour filter. 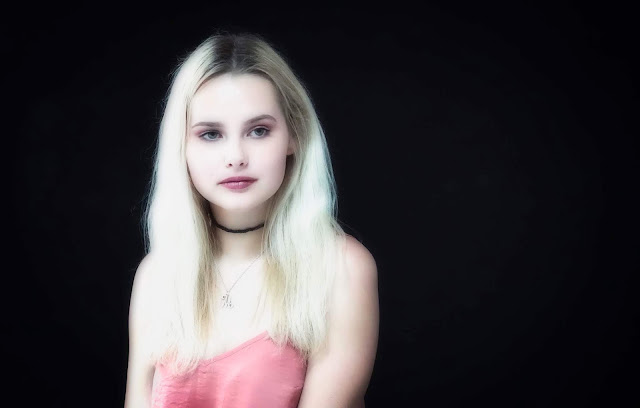 But what I consider my best shot of the night is of a club member who was waiting
while they were setting up the lights. All natural, no makeup, no forced smile,  100% real...
with a hundred things on his mind. 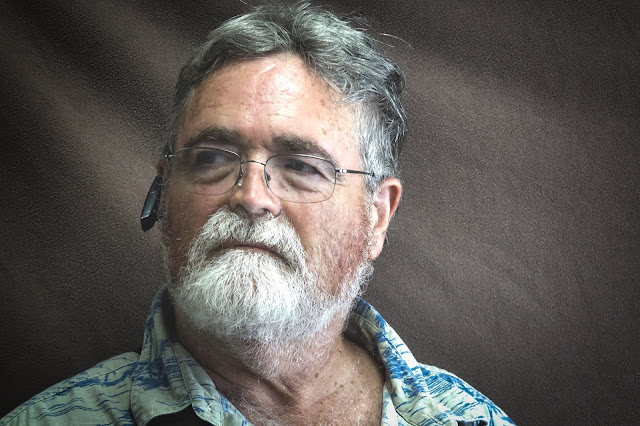 Next week I get back on the road.
Riding up to northern Idaho for the National Sidecar rally.

Am looking forward to get some good photos from the road and at the rally.