Have been stranded in Kansas for two days now. It all started after changing the oil in a Walmart parking lot Monday morning. Riding back to the motel to check out, Da'mit lost power to the rear wheel and a racheting sounds rang from the rear drive. I pushed the rig off the street to a safe spot. Removed the rear wheel to see that the drive splines on the final drive were worn off. The splines on the rear hub were worn off too. For those not familiar with the Ural, it has a drive shaft not a chain to drive the rear wheel. The rear wheel is mounted to the splined drive shaft off the final drive gear housing.

Decided to mount the spare tire on the worn drive shaft and try limping back to the motel. We made it by going 10 - 15 mph.

Now to locate a new final drive. They are rebuildable, but not something I want to attempt in a motel parking lot. On Monday's many motorcycle shops close so could only find a few open. First four open shops had no final drives on hand. Finally reached Terry Crawford in Michigan who said he didn't have one but would call some of the Ural dealers directly as he had their personal cell phone numbers. Numbers he was not allow to share with me.

An hour later Terry called back to say he located a new final drive at Triquest cycles in California and to call the owner first thing Tuesday morning, as they were closed on Mondays. Now that I had a line on a possible final drive, I told the other two guys to go ahead and I'll meet up with them later in the week, maybe.

In preperation for installing a new final drive, I borrowed some cinder blocks from the motel owner, jacked up Da'mit and removed the worn drive. 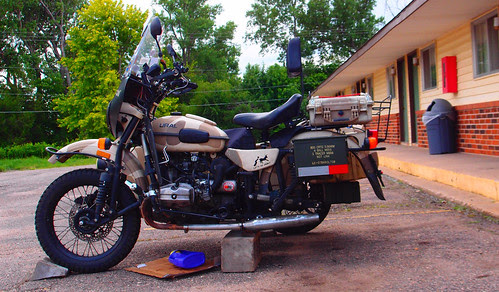 Da'mit awaits her new rear end. That wheel you see behind the exhaust pipe is the sidecar wheel. The rear wheel has been removed.

Rudy and Dave went on to Hutchinson but decided to return to Newton where I am, to see if a new final drive is really coming my way, soon.

Tuesday mornng I talk with Ski, the owner of Triquest Cycles. Yes, he has a final drive ready to ship. I mention that it might be covered under my warranty. He calls Ural headquarters in Redmond, WA to see what they say. Great news, the $990.00 final drive will be replaced under warranty. I have to pay for shipping. Ski agrees to grease the zerk fittings on the drive as I don't have a grease gun with me and will ship it out today. Should have by tomorrow PM, install and be back on the road Thursday AM. Great news. 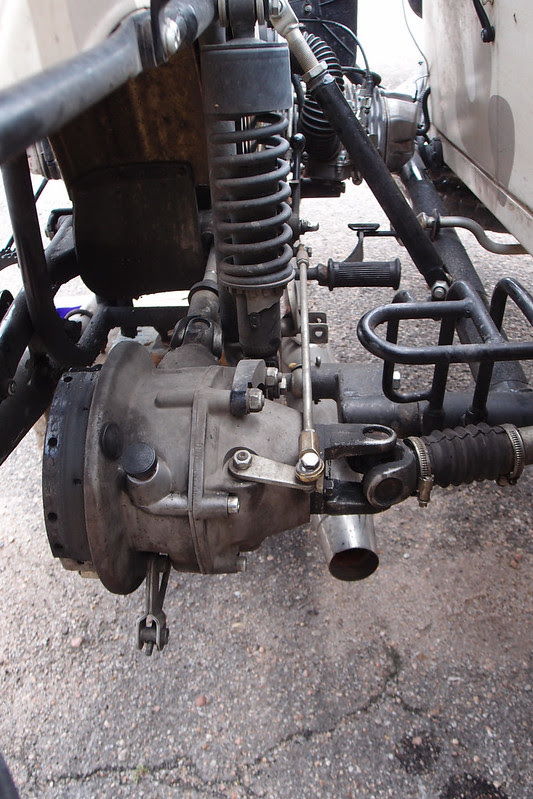 The rear wheel is removed and now to remove the old final drive which is that big grey bell housing. Because Da'mit has two wheel drive, there is a drive shaft coming from the transmissin to the final drive and another drive shaft going to the right to the sidecar wheel. That arm in the middle is to engage or disengage the two wheel drive. 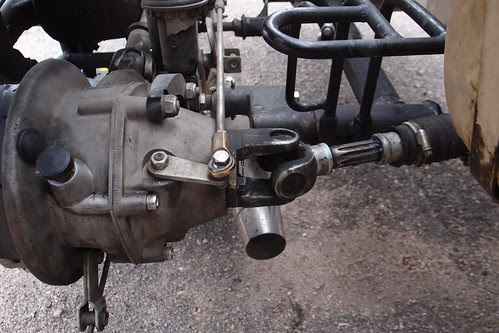 Here I loosened and slid the rubber boot cover off the sidecar drive shaft, preparing to unbolt the housing. 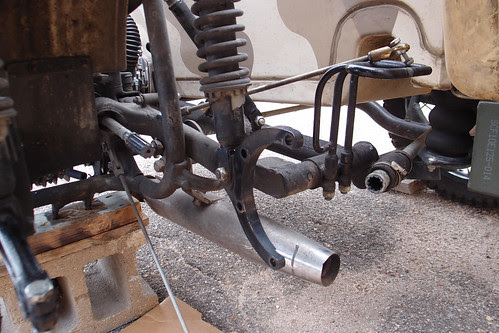 Four bolts, the brake linkage and the final drive is removed. The trick is to properly align the drive shafts when reinstalling the new drive. 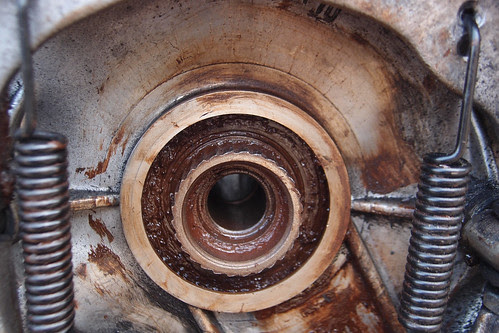 This is what worn splines look like. All the teeth are worn smooth down to points. This photo was taken after I wiped off the excess grease in order to show the splines. 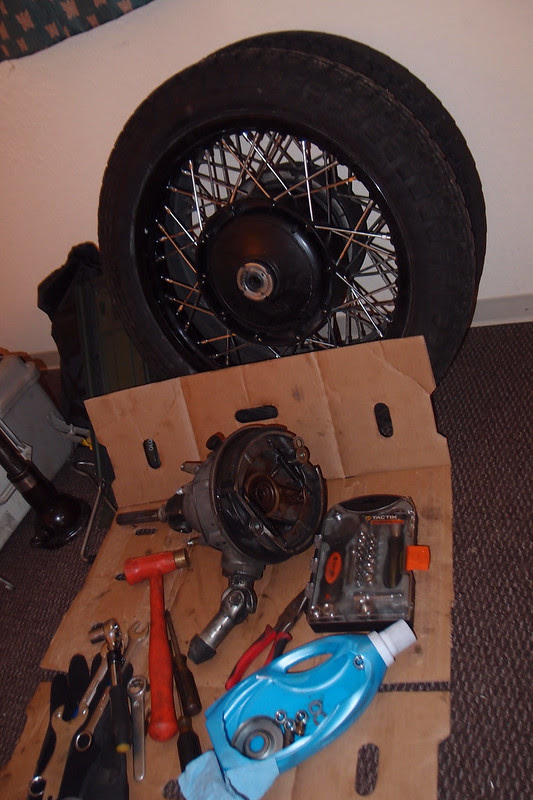 This is what my motel room looks like with tires, old final drive, tools, nuts and bolts, waiting to install the new drive. Will ship the old drive home and rebuild it on the workbench when I return.

Now that we know a final drive is heading my way, we agree that Rudy and Dave should press on, slowly. I can catch up with them later in the week. Spoke with them tonight, thunderstorms are keeping them off the roads so we are not far apart.
Cannot say enough good things about Ural's customer support and the dealer network. So many people went out of their way to get me back on the road. Tonight I'll sleep well knowing the adventure continues, it is not ending in Kansas.
When traveling by motorcycle, I like to stay at small Mom & Pop motels, many run by a family named Patel. Here they have been very helpful, providing blocks and allowing me to work on Da'mit in front of my room. Not many large national chains would allow me to repair my sidecar rig on their parking lot and bring all of the spare parts and tires into the room.
Nite Da'mit

Posted with Blogsy
Posted by CCjon at 12:40 AM