Riding out to Rocky Point Pond, I heard strange knocking noises coming from the rear wheel/chain area. After a good nights rest in the woods, decided to remove the rear wheel and check it out.

With the help of various pieces of lumber and my little scissor jack, the wheel is off. As you can see, I carry a rather complete set of tools when traveling long distance. 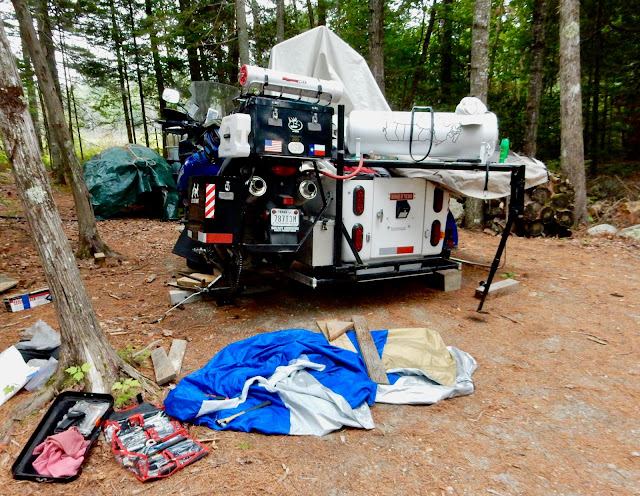 Pulling the sprocket, was able to confirm what I thought was the issue, worn rubber cushions in the rear wheel. They were allowing too much play, thus making an intermittent knocking noise.

Among the spare parts carried, was a new set of cushions.
Pop the old ones out, insert new ones. Easy job. 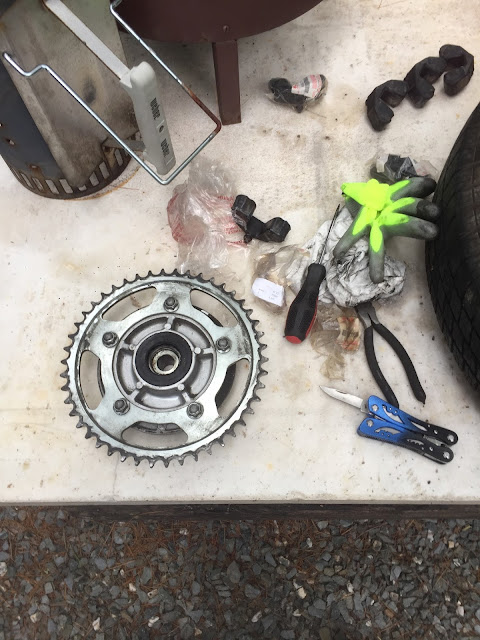 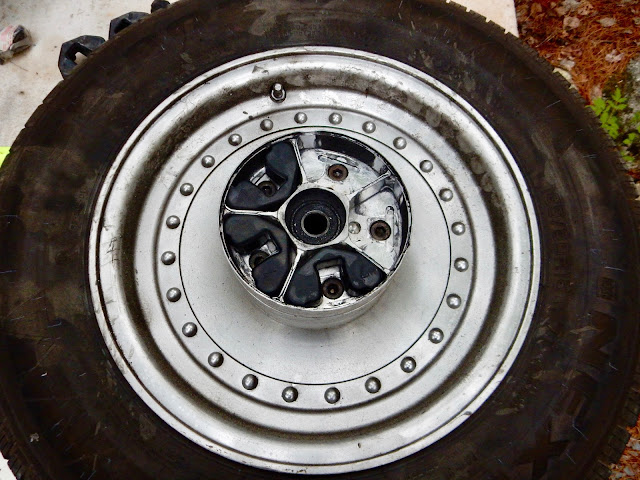 With the rear wheel off, I checked the bearings I had installed by a shop in Houston just before we started this ride.  Left bearing, still smooth, good.  THEN SHOCK!!! the right rear bearing was already failing.  Pieces of metal from the bearing cage were tearing off.......
Now where to get a new bearing as I was not carrying any spares.

Googled motorcycle shops in Ellsworth. Several popped up, but one was rated the best with five stars. Called them and explained the situation. Eric said to bring the bike down and they would have to see it first before knowing if they could do anything.

Reassembled the rig, loaded everything and rode the six miles to GRC in Ellsworth. 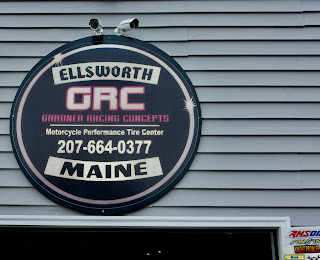 On arriving, Eric quickly rolled out one of their auto jacks and removed the rear wheel. Damit is too wide to fit through the door of their shop. 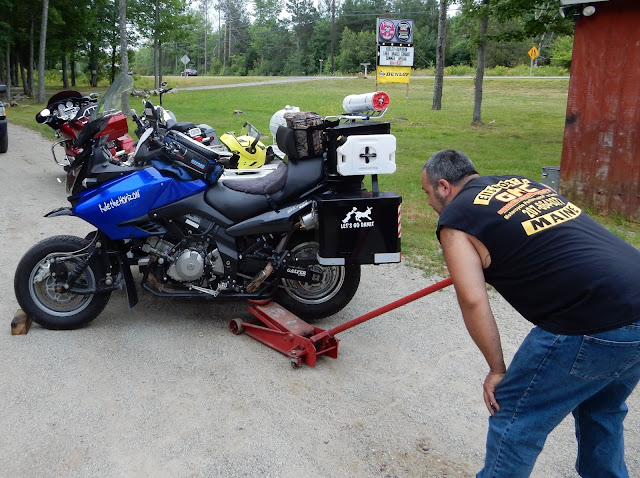 The owner, Stanley Gardner and Eric put the wheel on the work bench to study the problem. They removed the failed bearing, cleaned, sized and found the correct bearing to install. To be safe, they replaced both rear bearings and cleaned the larger bearing near the sprocket.  They properly lubricated and set in the new bearings. I greatly appreciated their efforts as they stopped working on other bikes to focus their efforts on Damit. 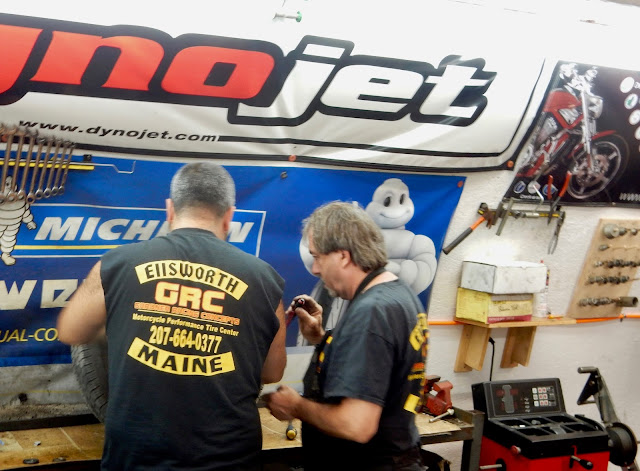 Stanley insisted I carry two spare bearing with me as the one that failed only had 2500 miles on it. Have another 5000 miles yet to go on this ride.  Was it a fluke the bearing failed so soon, a defective bearing? Was improperly installed? Not lubricated properly? What???  Who knows.

Then he said I could not leave until he had taken a few photos of the rig for his Facebook page. In his lifetime of working on motorcycles he had never seen anything like Damit.

I have to admit that Damit III is the most photographed sidecar rig or motorcycle I have ever owned. People are puzzled as to exactly what that big white tub is. Even told some teenagers who asked, that at the end of a long hot day of riding, it is a hot tub for soaking in.

By 11 AM, Stanley and Eric had me back on the road. Pointed Damit in the direction of Harrington, Maine, where my grandmother Mama Bee spent many summers. She often talked of having to travel by train to get there from Ohio for many years after World War II. 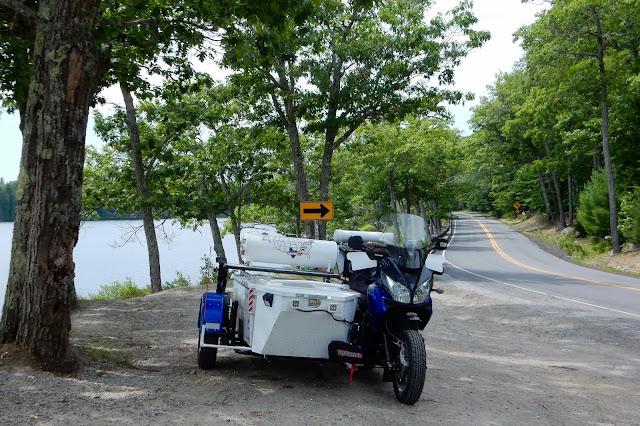 On the road again, riding smooth, no noises. 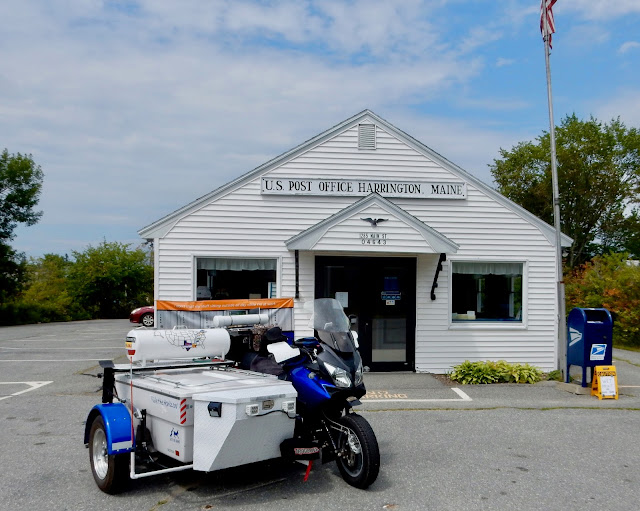 Not many buildings in Harrington, the old house on the coast is gone now, replaced with a fancy two story mansion with indoor plumbing. Mama Bee would have liked that.
The cranberry patch behind the house is gone. 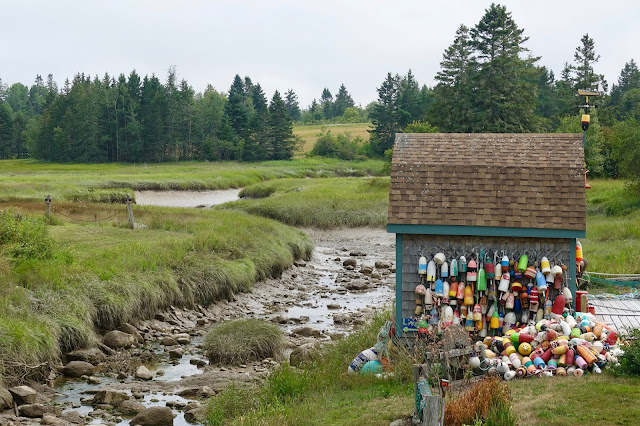 Met Russell, a retired truck driver from Harrington, who now collects lobster trap buoys. He showed me where he plants milkweed to attract monarch butterflies, bees and hummingbirds. But he prefers the monarchs. Saw many small young monarchs on the milkweed flowers but they were too active to photograph.

At high tide, the ocean fills the creek behind his shed.

For those who have never seen where blueberries come from, this is a Down East blueberry farm field. Are very low plants, lower than strawberries.
The region of Maine east of Ellsworth to the Canadian border is known as Down East.

Tonight we'll stay at a motel in Calais, ME before crossing the border into Canada tomorrow.
Need to recharge camera, laptop and iPhone batteries.