Note: Have been corrected, it is not pronounced Nufunlan, but New Found Land, so says a Labbie,
not a Newfie.


The new tire arrived in Antigonish, was quickly mounted and we were on our way once again. This time to Sydney, NS to make reservations for the ferry to Newfoundland.  Heard reservations are needed with all the vacationers traveling this summer for Canada 150 - the one hundred and fiftieth anniversary of the Canadian national parks.  All national parks are free this year. Camping sites have been booked months in advance.

Arriving at the ferry terminal, the young lady informed me this afternoon's boarding closed twenty minutes ago.  Before I could answer, she said, "Wait!" Called someone, gave me a thumb's up and said "You're on. That'll be $225 please".

Two Hundred Twenty five Canadian Dollars, with no cabin, just for the bike and myself including the senior discount.  It is a sixteen hour overnight ferry ride to Argentia/Placentia, NFL.  There is a shorter ferry to the western end of NFL but then I would have to ride east across the island to reach Cape Spear and then ride all the way back west to reach the ferry to Labrador.  There will be no backtracking across NFL by taking the ferry to Argentia on the southeast corner.

There must have been twenty or more motorcycle riders going on that ferry. Plus the dozens and dozens of cars, trucks, campers, RV's eighteen wheelers and buses.

Waiting in line for the ferry, was adopted by a Harley biker gang of Canadian Veterans from the Toronto area. They and their wives all loved Damit.  Damit has to be the most photographed motorcycle I have ever owned.  Is one of a kind and people recognized it for that. 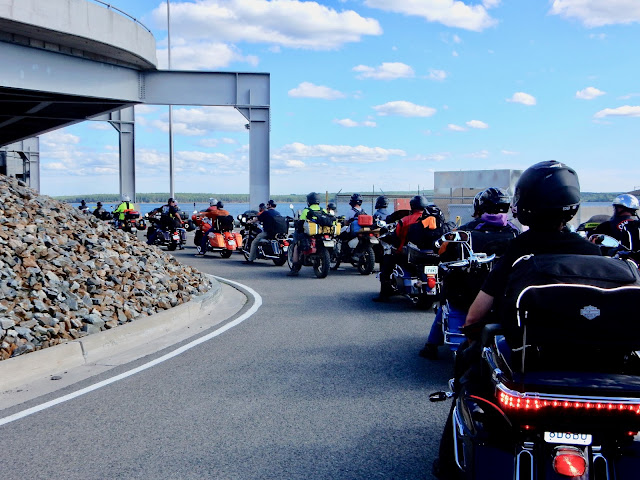 Lining up to load the ferry.

A crew member directed me to a quiet sitting area in the rear of the ship. Grabbed a reclining seat and piece of floor to stretch out on for sleeping.  Was one of the coldest nights for me.  Carpet on steel does not make a warm bed. 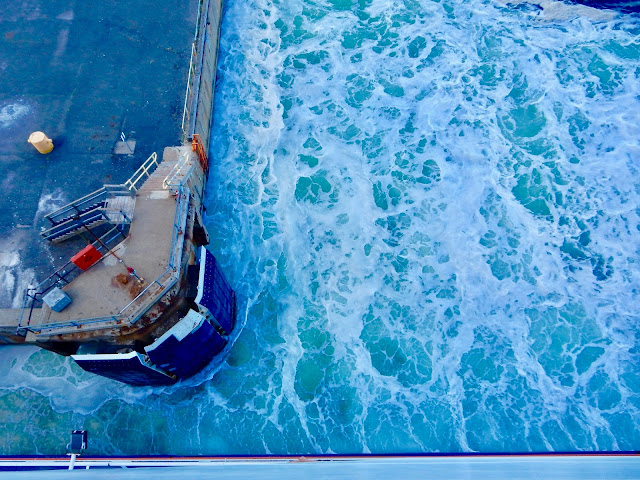 Leaving the Port of Sydney, NS in our wake. 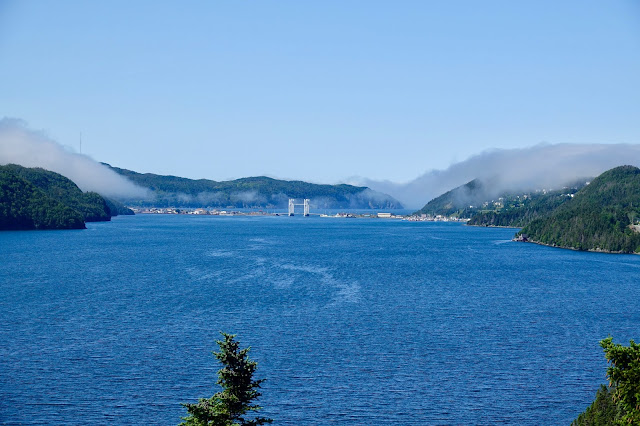 Next morning, the village of Placentia in the distance. 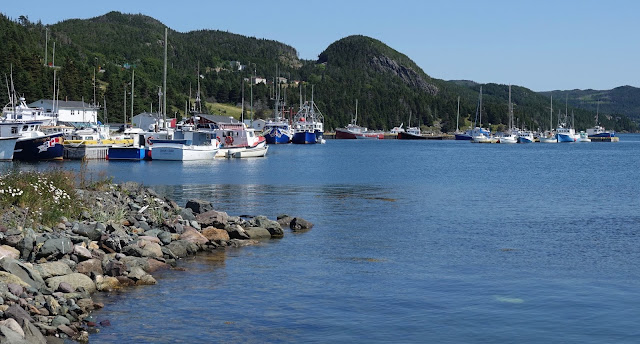 From there I rode to St Johns and Cape Spear, the eastern most point of Canada.
On a globe, Cape Spear is south of Greenland. 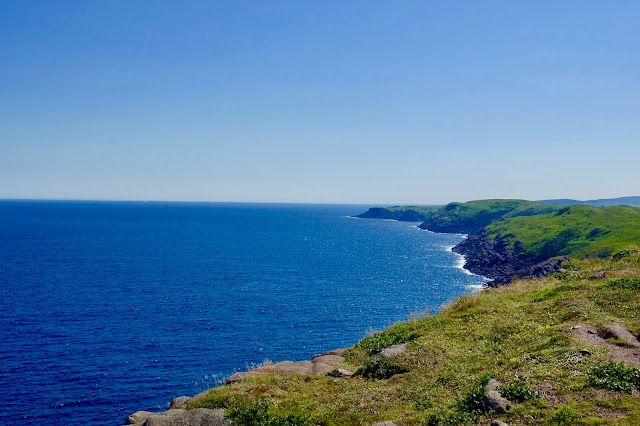 Where the Atlantic greets Canada every morning. 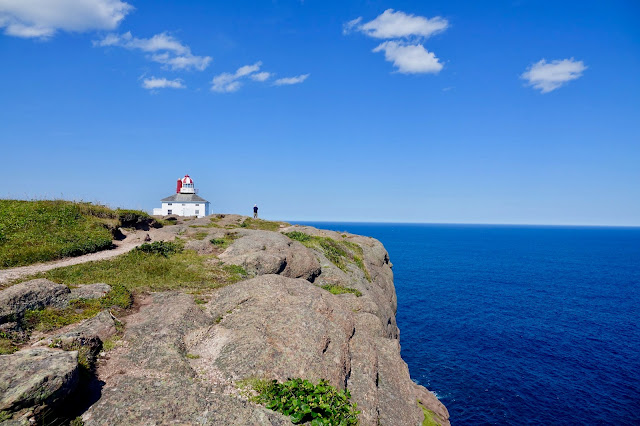 The old original lighthouse has been restored.

Leaving Cape Spear,  Damit and I take two days to travel west across NFL. At a rest area near, Gander, had an interesting two visitors. First was a Jehovah's Witness who wanted to save my soul.  He gave up when I corrected his analogy that the seasons are like clockwork. I informed him that nature and God do not operate by clocks.  That is a human invention.  Everything living in the natural world was a rhythm.

After he left a retired Canadian sailer decided I needed to see photos on his cell phone of a chopper motorcycle he had built. Every third word out of his mouth was "F" this, and "Mother" that.  When he informed me he had been a sailor, it all made sense.  Reconfirmed that old stereotype, "He cusses like a sailor".

At Deer Lake we turned right and started north, up the western coast to the ferry port for Labrador. That night we camp along the shore in Gros Morne Nat Park. Listening to the waves lull me to sleep. 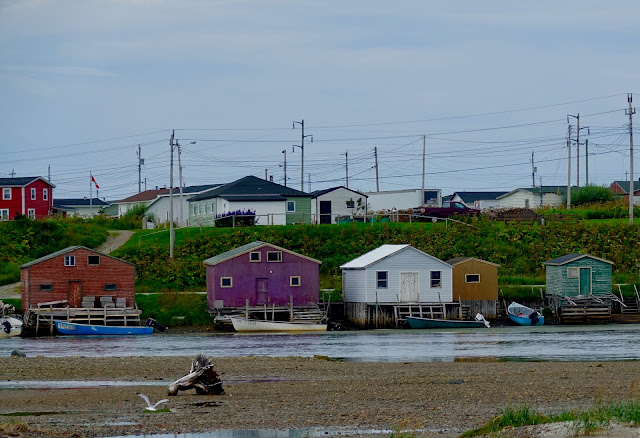 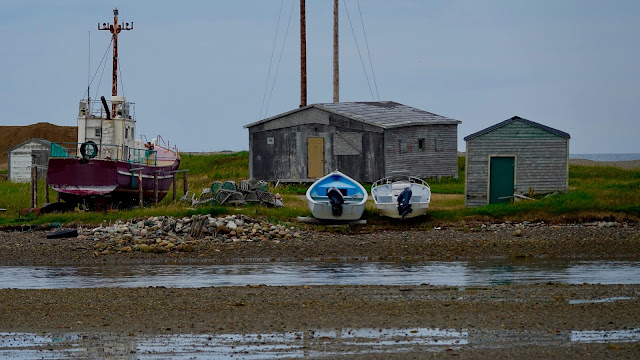 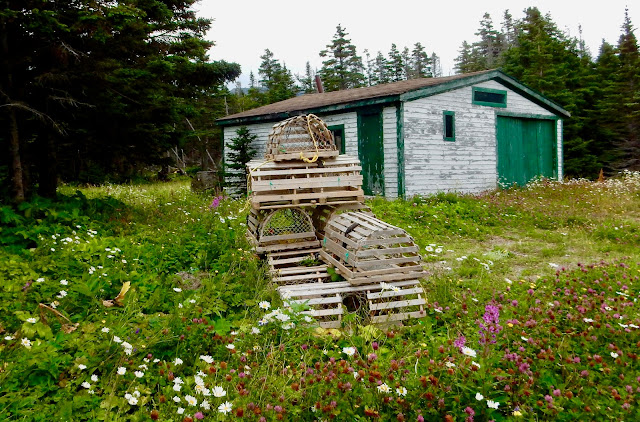 One sees a lot of stacked lobster traps along the coast. The newer ones are all steel cage and netting. This old style made of wood is disappearing.