US 50 crossing northern Nevada has been called the loneliest highway. In fact you can buy t--shirts, pins and certificates proclaiming you survived the Loneliest Highway. 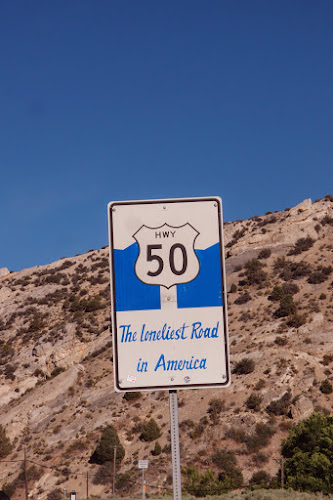 Am not sure how survival qualifies when you are traveling in an air conditioned automobile. Maybe back in the Fifties when cars would more often over-heat, when hanging a burlap bag filled with water in front of the car's grill to add extra cooling was a common sight. Back then surviving the Loneliest Highway was a challenge and a question mark. But today, unless you are traveling on a bicycle, motorcycle or a Ural, survival is not questioned. 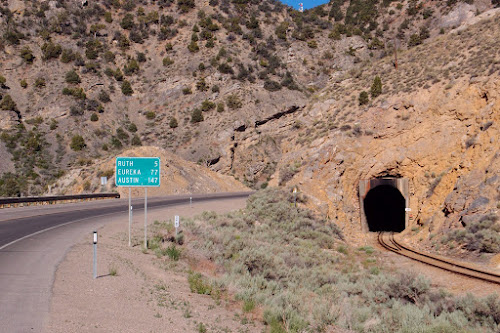 The train tunnel curves through the mountain. 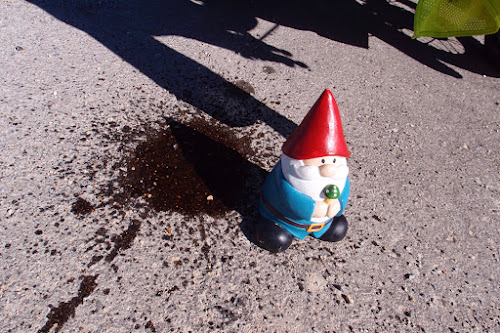 Chuck strikes again. Now Rudy's "The Beast" springs an oil leak in the right valve cover, far out on the desert, leaviing his "mark" on the roadway. Chuck chuckles in amuesment. 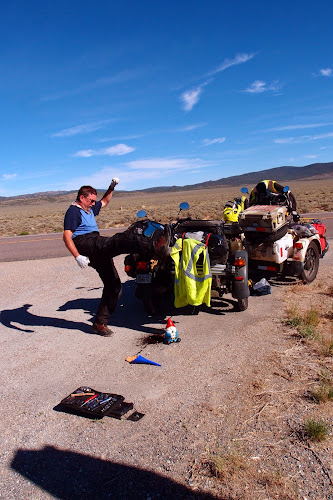 Today we didn't ride far, but the sights were fantastic, the desert impressive and the heat oppressive. After taking care of a few maintenance items last nght, it was late when we turned in, so we started later today.

Early in the day we wanted to capture a photo of the three rigs spread across the Loneliest Highway . After several attempts, we got the photo. Here it is. 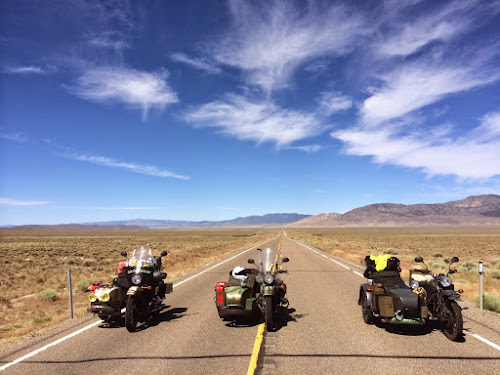 Leaving Ely, we rode up hill before descending onto the desert floor. Thirty kms out we spotted three bicycles on the side of the road, but no riders. It was about noon and the dry heat as in the mid 90's. We turned around to check on the riders. Three young men from Great Britian had taken shelter under the bridge, out of the sun, to eat lunch. They were okay. Also seems pleased that we stopped to check on them and offer them water. James from London, Sam from Oxford and Charles from Newcastle were in good shape and prepared. This is what young British lads do for their holiday, bicycle across the USA. 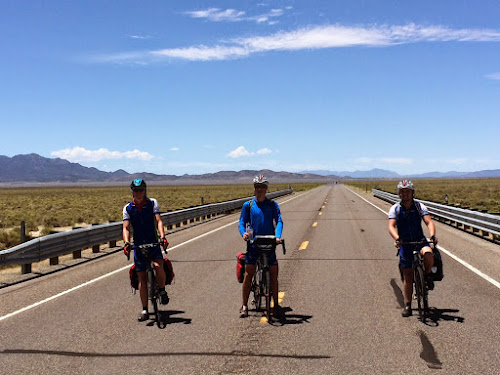 A bit later we met Phil, also from England but a bit older and riding a bicycle alone. He did need water as his bottle was almost empty. Poor planning. He still had another 40 kms before Ely, going uphill. We were carrying extra water so refilling bicyclists water bottles is no problem for us.

Crossing Northern Nevada is not one contuous flat desert crossing. There are a series of mountain ranges to cross, not extrmely high passes, maybe average 7000 ft each. But it is a long climb to the pass then a twisting ride back down the other side before a long desert stretch crossing. Using the brakes and down shifting was a common practice to get up and over.

Coming down a long steep switch-back road into Austin, Nevada, my front brakes gave out just as I rolled into town. Water sizzled when I poured a little on the front brake caliper. Not good. Told the guys to find a room for the night, as once my front brake cooled off I would need to tear it apart. See what the problem is and fix it.

Rudy found us a motel room with three beds, unusual, as most nights we are using the inflatable bed for the third person. We rotate who gets to sleep on it. Actually that bed is as comfortable or more comfortable than many motel beds. By sleeping three in a room, we are keeping our cost of the trip down.

Now cool to the touch, tore the front brake apart. The pads still looked good so did not installed the used set of pads I was carrying. After removing the pads, sprayed the caliper and pistons to lubricate and clean away any grit that might be making the pads stick. Seems to be working much better now. Might have just been dragging. Thus overheating the brake. making the fluid boil. That will cause a loss of stopping ability. Rear brake was not affected, so still could stop, just not quickly.

Found a laundramat across the street from the motel. While the clothes dry I write this blog.

The Pony Motel is rustic, no AC, but the lady assured us the temperatures will drop quickly once the sun goes down. The air is dry, no humidity.

Tomorrow we head for Fallon and Carson City, Nevada.

Posted with Blogsy
Posted by CCjon at 2:45 PM