It was cool and damp when Dennis, Rudy and I left Bodega Bay to ride south. After saying goodby and thanking Becky and Leland for their great hospitality, we rode Highway 1 along the coast to San Francisco. We wanted to see the Golden Gate Bridge before proceeding on down to Santa Clara to visit Ski at Triquest Motocycles. Ski is the guru of Urals on the West Coast.

Stopping at the north end of the bridge, fog would open up then close rapidly, only allowing photos if you were fast enough. Were not happy with the phottos we were getting 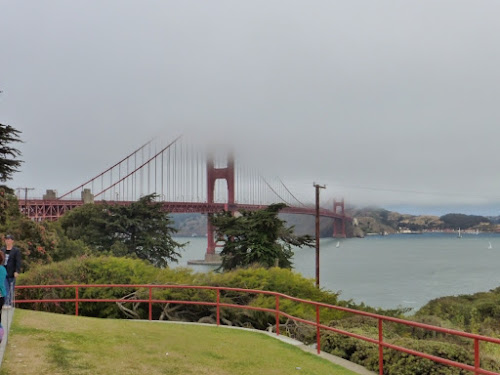 Decided to try the south end of the bridge. 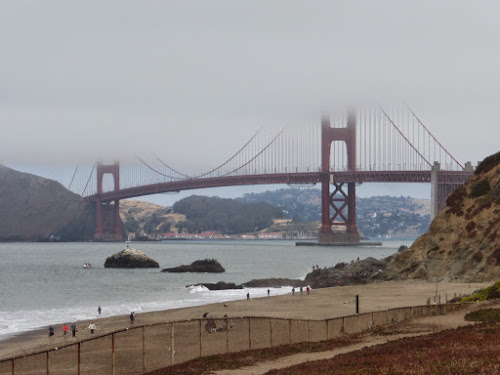 The tops are still fog covered, but the bridge is recognizable.
In Santa Clara, Ski was waiting for us even though it was a Sunday. After visiting and talking Urals for an hour or so, Ski checked the compression on Da'mit. Both cylinders were 150 pounds dry. That is very good. A compression test will tell you if the engine has worn out cylinders, pistons too loose, broken or cracked piston rings, etc. You want both cylinders to read over 125 pounds and both read the same number.
Rudy's left cylinder tested 100 dry and 150 wet. So he has some looseness in the left cylinder, but should make it home okay. The right cylinder was a little weak, but no sign of a failure. We were concerned because Rudy's left cylinder is blowing blue smoke or an oil film. 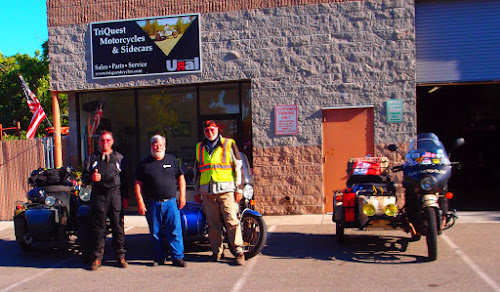 Rudy, Slki and I in front of TriQuest.
Since we were going to meet Dave in a day or two near Lodi, Dennis invited us to their ranch home in Lodi. We rode the California expressways most of the way. Was very, very glad most of the traffic was going in the opposite direction, back to the big cities as it was crawling along, congested and hot. Just shy of fifteen miles from the ranch, Rudy pulled off the expressway claiming he had a loss of power. Engine ran, but no power. Of course we were separated from Rudy as he was riding in the back when he pulled off. Several miles later we noticed he was no longer behind us. But using text messaging and cell phones, we found him.
Dennis said he would ride on to the ranch, get his van and trailer so we could carry the Beast to the ranch. There we would try to figure out what happened. I stayed with Rudy until Dennis returned. It was dark when we finally arrived at the ranch. 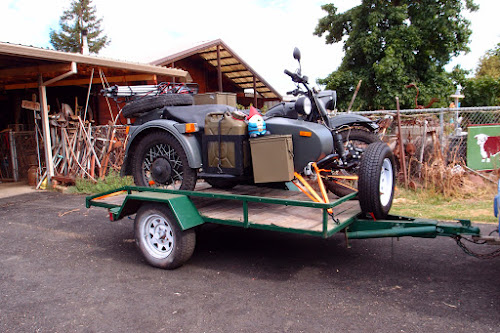 The Beast being trailered, Chuck the gnome chuckling.
Next morning,, we determined the right cylinder has no compression. A holed piston maybe? Dennis and Rudy are taking the Beast back across the state to Ski to see how fast he can fix it and have us back on the road. Meanwhile Dave in Sacramento and I in Lodi, sit tight. Timee to catch up on the blogs and wait for word on the Beast. Hopefully we will hear what might have caused the problem.
Now that I have internet service at the ranch, have posted four days of news with photos.
Stay tuned, Da'mit. The adventure continues......

Posted with Blogsy
Posted by CCjon at 2:56 PM