Rudy had burnt a hole in his right piston so Dennis trailered the rig to TriQuest in Santa Clara for Ski to repair/rebuild. Ski came in on his day off to do the work. They were back in Lodi at the ranch before midnight. The next morning Rudy had to do a few maintenance itms on the Beast so we could get be back on the road before noon. We agreed to meet Dave in Jackson, CA for lunch and start our return ride east. California is a beautiful state but the state road system is the worse I have ever seen. They should fire the highway planning department and hire a whle new crew. The poor citizens of California pay some of the highest gasoline taxes and have a terrible highway system to show for it.

Dennis accepted our invitation to ride to Angel Fire, NM with us. But before we cross the Sierra Nevada mountains, it was hot and his vision was blurring. He decide that he better stay in California so we said our goodbyes and continued on Rt 88 east. What a fantastic road over the mountains. Much better then US 50. Many scenic overlooks and vistas. More open views than from US 50. We finally arrived in Fallon, NV and stayed at the Naval Air Station there. Dave is retired military so he could get us in for the night. 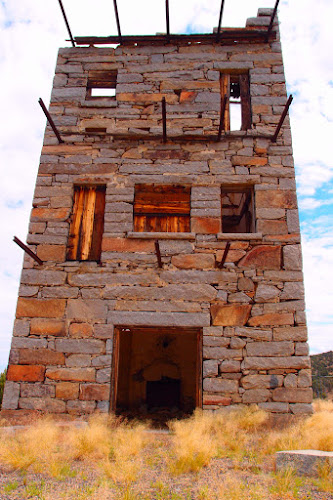 In Austin, NV a wealthy mine investor, railroadman built a castle for his family as a summer retreat on a hill overlooking the valley. Once completed, it was used one summer then sat empty ever after. The Stokes Castle was built in 1897.

Next morning we rode across northern Nevada. The riding gods were smiling most of the day. Rain showers were moving through the area so temperatures were low for this time of the year: high of 82 and a low of 62 today. 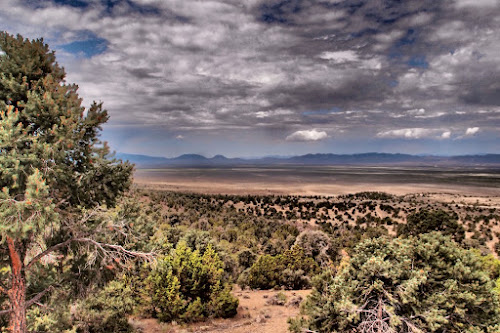 Rudy spotted another Shoe Tree, we had not heard about. 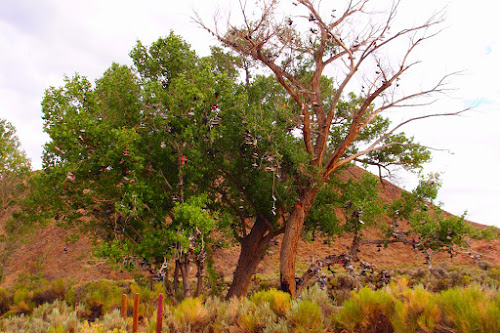 By the afternoon the rains found us, so we donned rain gear and rode on to Ely, NV for the night. Normally in the summer the rain gear makes you sweat so much that by the end of the day it looks like you rode in the rain with no gear. Today was different, the cooler temps made wearing the rain gear comfortable. 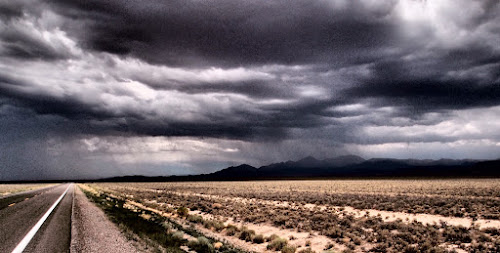 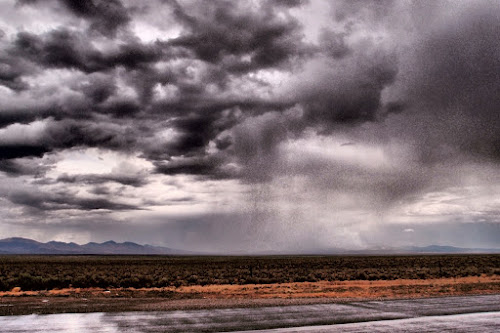 Rains on the left, on the right and straight ahead.

Posted with Blogsy
Posted by CCjon at 11:02 PM