NOTE: This is a longer than normal posting, as we wrap up our time in Spain.
Thank you for joining us as we explored this beautiful country.
We have returned to explore more of Valladolid before going on to Madrid and our flight back to reality.
Much smaller than Rome or Madrid, Valladolid has a lot of history. Some of which is still standing, other buried or recycled into other structures. Once the capital of Spain, Valladolid has many old catherals and government buildings, some dating as far back as the 11th century.
For our return visit, we found a small third floor, one bedroom apartment across the street from the main Cathedral. From here we can explore on foot without the need of taxis like we had to do in Rome. Being in the heart of the old town offers easy walking access to the most interesting monuments, churches, dining and shopping. Old town may sound like old dusty edifices, but in reality the neighborhood is full of families, retirees, youngsters that bring the streets alive every morning, sometimes late into the night.
It's ten pm, looking down from our balcony.
The area is very walkable. 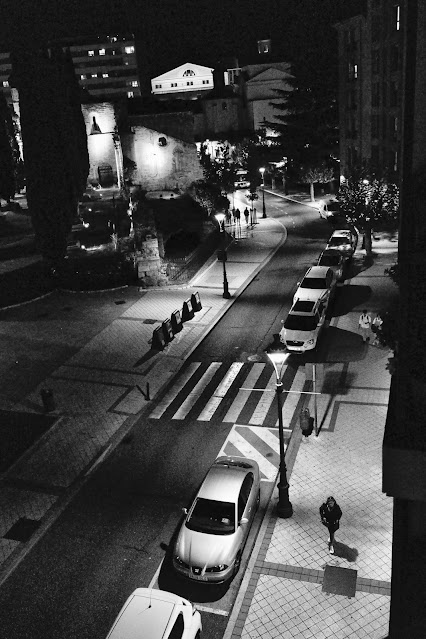 Stepping out into the Plaza the first night,
captured an iPhone photographer shooting the same scene. 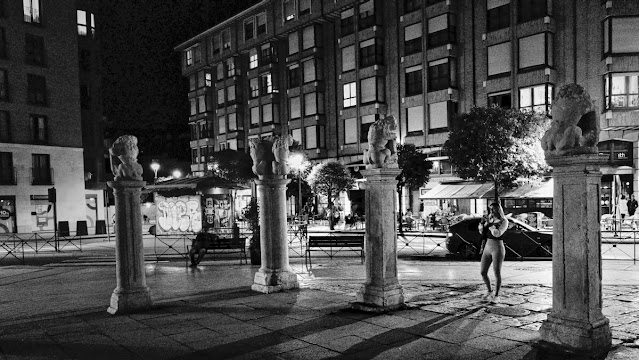 For the next few days, I planned to sit in the Plaza in front of the Cathedral, people watch and capture their images under the watchful eye of Miguel D. Cervantes' statue. Miguel is an author from Valladolid.
He wrote Don Quijote, Man of La Mancha.
Classic Valladolid street crossing to the Plaza 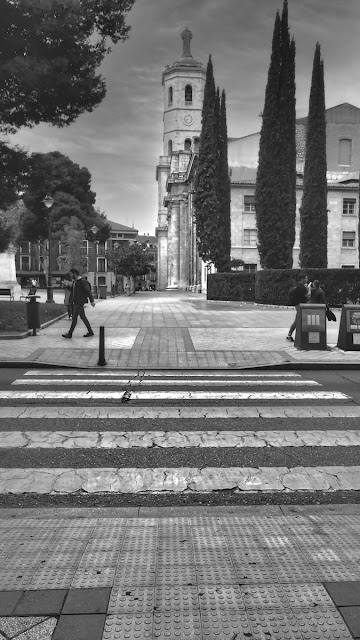 Under watchful eyes of M. Cervantes 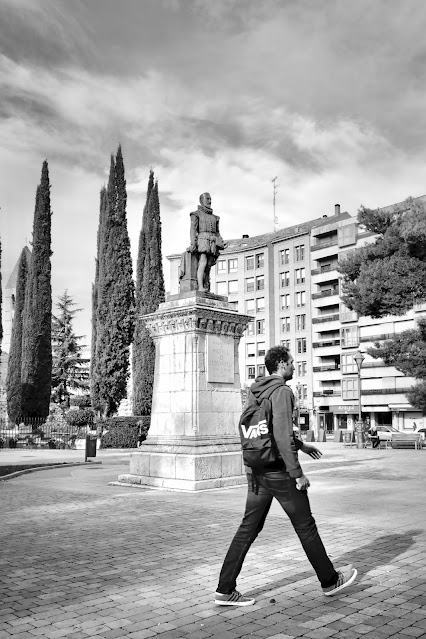 Threatened to rain but never did 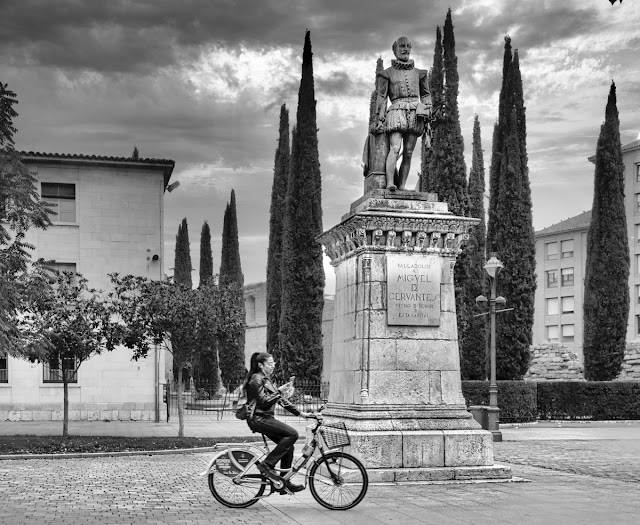 Settled in with the old folks and watched...
people coming and going.
This was one of the few plazas we have seen that have chairs and benches.
Am really liking Valladolid. Has all the offering of a large city
with a small town pace. 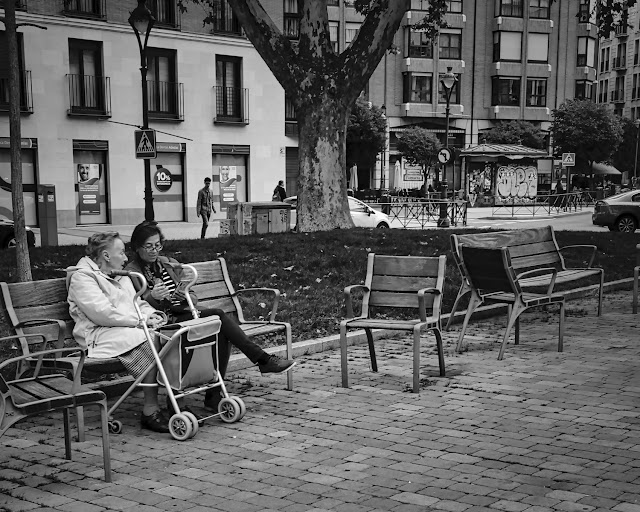 With her daily newspaper, she enjoyed the fresh air and cool weather on a plaza bench.
When did reading the morning newspaper go out of fashion? 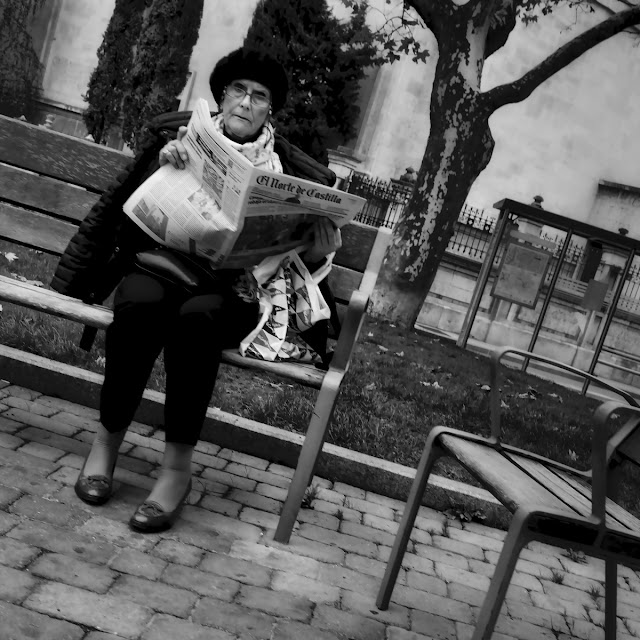 Observed the younger generation go about doing what young people do today. 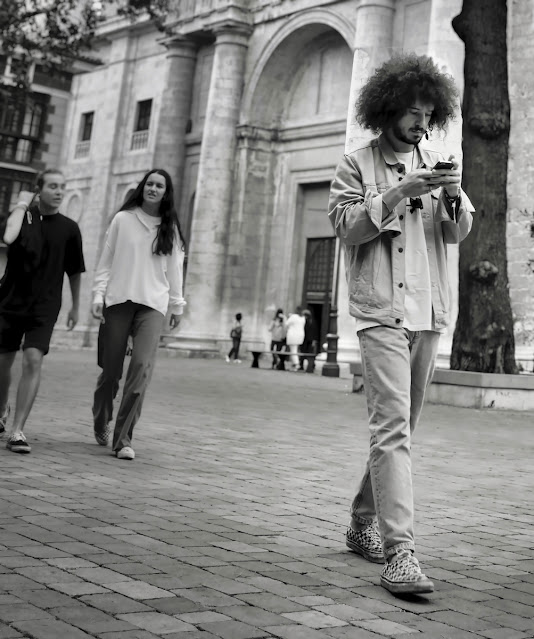 It became a guessing game: Name that person's field of study or occupation! 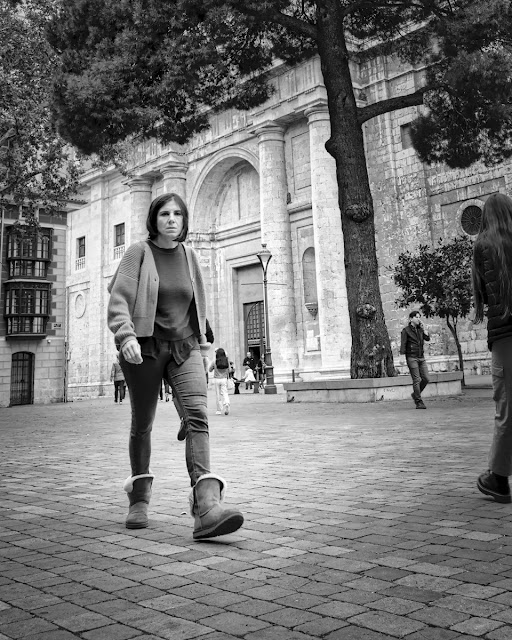 Or just be entertained watching them interact with each other 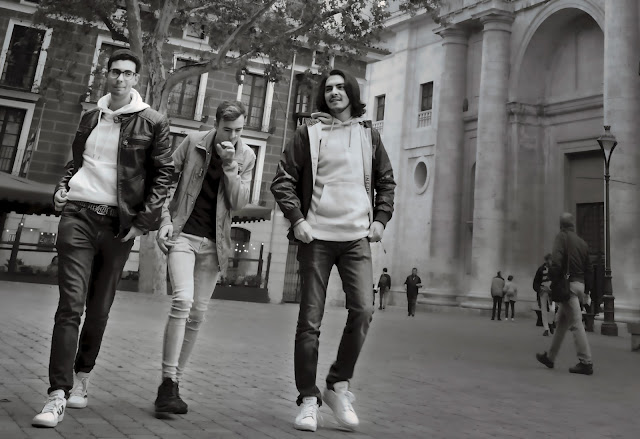 Watching the older generation can be interesting too.
What did he do before his iPhone? 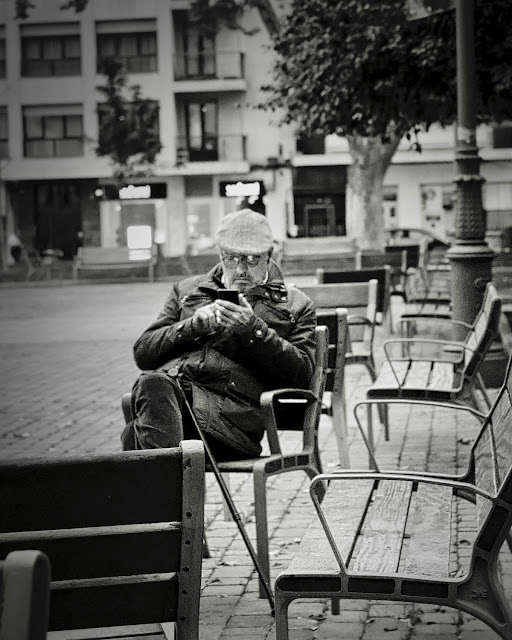 Then another senior passes by with iPhone in hand.
Cell phones here are as common as people smoking.
Though have not seen any retirees smoking.
Maybe smokers don't live long enough to retire?
Look at the building directly behind the two gentlemen - shades down, third floor up.
That's where we are staying, one bedroom airbnb.
There one can hear all the sounds of life in the Plaza up there.
We love it. 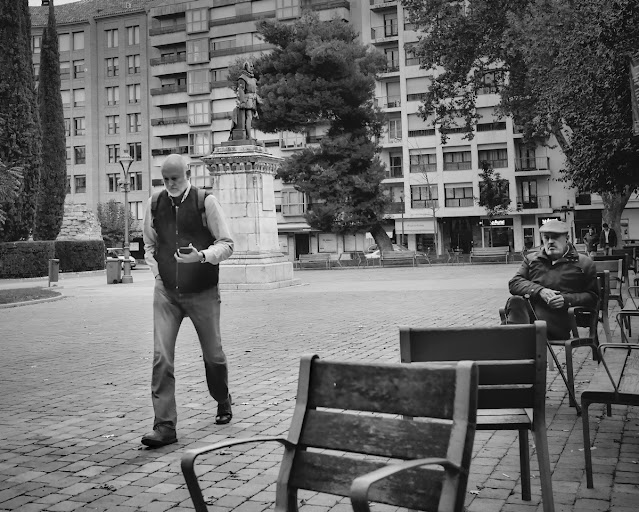 Because parking is such a problem, most people walk, or bicycle, or scooter or... The lightweight electric T-bar scooters are gaining popularity here. Some even have a headlamp, tail light and a disk brake.
One sees them mixing in with the cars going by just like bicycles and motorcycles.
North of the Plaza is the College of Law for the Universidad de Valladolid.
Lawyers or Professors are frequently seen walking nearby, in suit and tie with briefcase in hand. 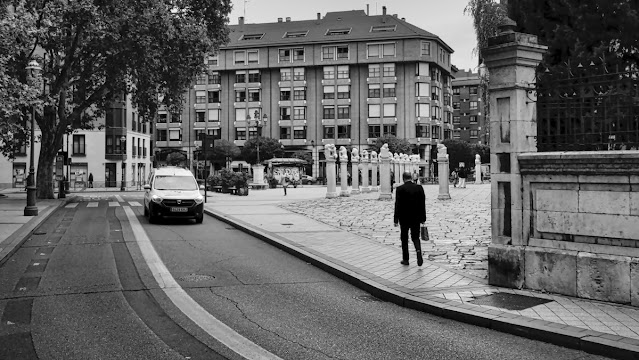 Back in the Plaza, a teens share time together...
If it looks cool here, the temps are low to mid-fifties in the mornings, rising to low 70's by 4 pm. 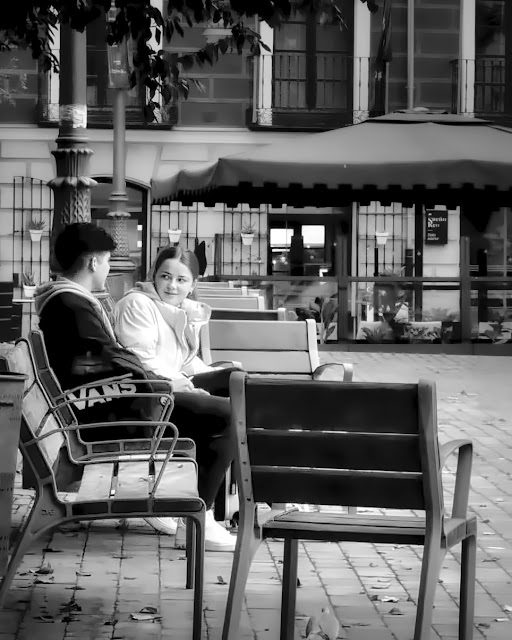 The Cathedral finally opened their doors, so we could go in.
Anchoring the Plaza de la Universidad is the Valladolid Cathedral. Construction started in 1527 on the site of a former 13th century Collegiate (old royal chapel). It was completed in the 17th century. We found this church to be one of the most authentic cathedrals we have seen in Europe. No ornate artwork, no smooth marble floors, or heavy tapestry, just rough cut, hand laid local granite.
Some floor stones even rock a bit when you step on them. Stiletto heels are not recommended. It is very obvious this Cathedral does not have a wealthy patronage. With a dozen or so different catholic churches in Valladolid, support is spread thin.
Quite dark inside, I asked Amparo to use the light on her iPhone to illuminate her face for the photo.
That was too bright, but here it is anyways.
This is the entry alcove, it gets darker further in. 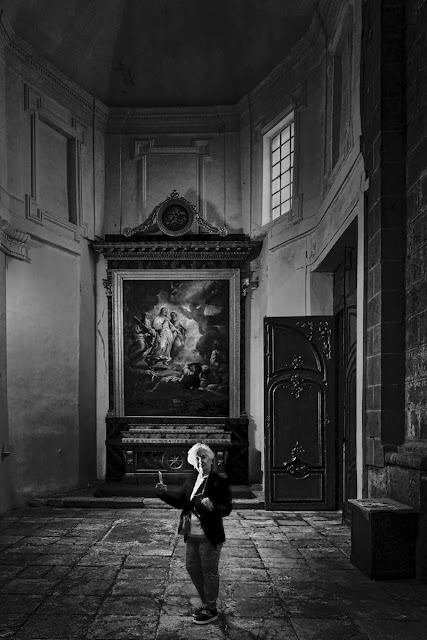 Had to adjust the exposure on the camera to capture photos in the dark interior.
Central Cathedral nave and altar.
During Mass, the altar and transept are illuminated 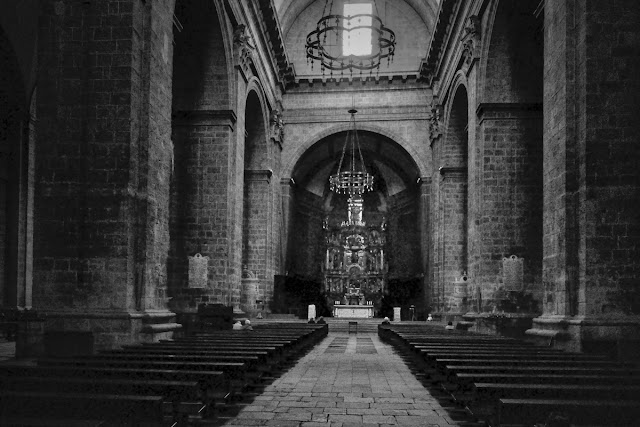 Original Cathedral lighting fixture, still in use today.
Behind it, is an old non-original hot water radiator. 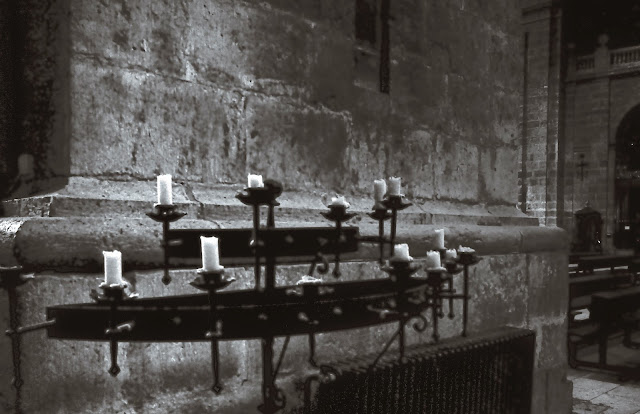 Returned the next day to get a better photo of the church altar.
Even the gold center altar cannot overcome the humbleness of the cold granite stone. 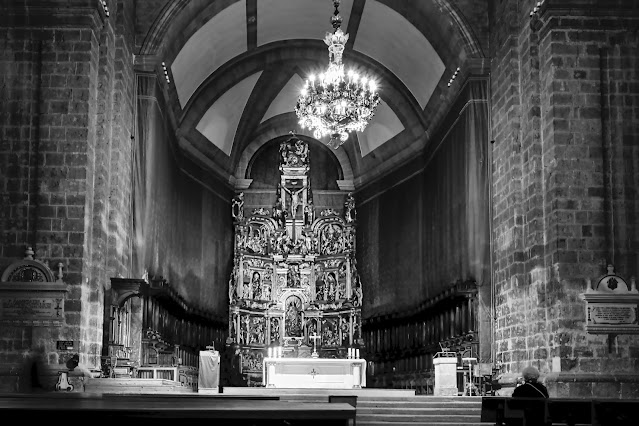 From the Cathedral, we walked the narrow streets toward the Plaza Mayor.
Yes, cars can and do drive through here too. 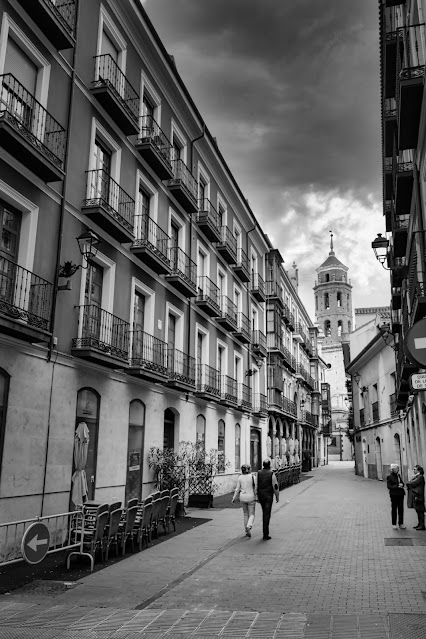 One of the typical newsstands found in Europe.
A worker refills his mop bucket from the public water fountain. These public fountains are quite common. They told us the water is safe to drink everywhere in Spain. We did not try it.
We did see many fill bottles, draw water for their dogs or drink directly from the fountain.
The people here love dogs as they are a common sight being walked, especially in the evenings.
We found all Spanish cities to be very clean.
Those are falling leaves on the pavement, not trash. 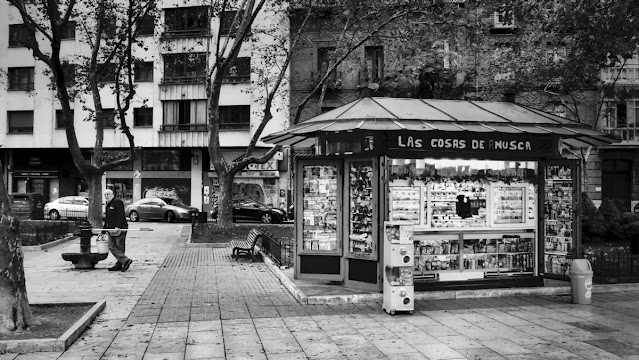 After meandering through the narrow streets, we arrived at the Plaza Mayor around noon. Other than the numerous restaurants with outdoor seating surrounding the large Plaza, not much going on today. 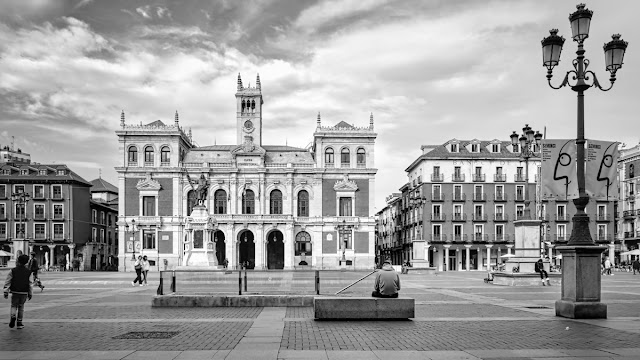 The imposing building above is the civil government building, courts, administration, etc.
We saw a couple emerge after being married in a civil ceremony. The family gathered to take the traditional family wedding photos in the middle of the Plaza.
Our final day in Valladolid, we drove to Rueda once more,
then to Olmeda where we visited La Mota Castle. 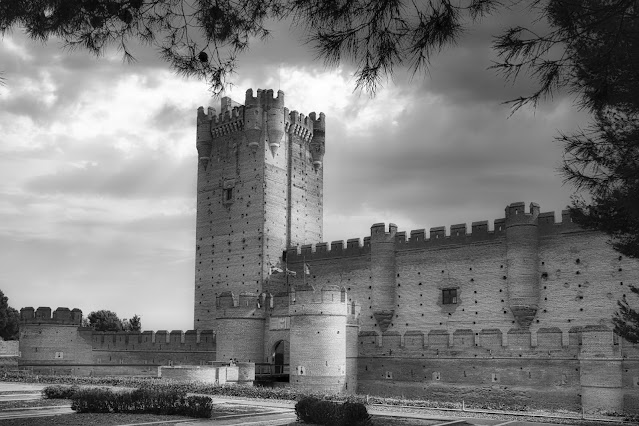 Tomorrow we drive to Madrid for a few days before departing for Texas.
This trip has been an adventure for Amparo. Her first time to travel international without a daily destination, without knowing where we would be sleeping every night.
This has been a great learning experience, with many pleasant surprises,
interesting food choices and many very nice people everywhere we went.
We could spend a month or so in Spain, using Valladolid as a base.
Maybe in 2024 or 26...
CCjon
Posted by CCjon at 12:21 AM