On our last day in Spain, Amparo suggested we go to the Plaza Mayor (trans: Town Square) in the center of Madrid for Paella. Some consider paella to be the national dish of Spain, but Spaniards think of it as a dish from Valencia. The recipe calls for rice and seafood
cooked in a large round, shallow copper skillet.
The Plaza itself is a large open-air market of numerous cafés, street vendors, entertainers, tourists, statues, and more; enclosed on four sides by multi-story residential buildings.
There are always people here doing whatever 24/7.
Are you lonely? Go to the Plaza. You will find someone to talk to there.
There are numerous arched walkways leading into the Plaza.
Of course, lovers take advantage of the dark shadows to steal a kiss. 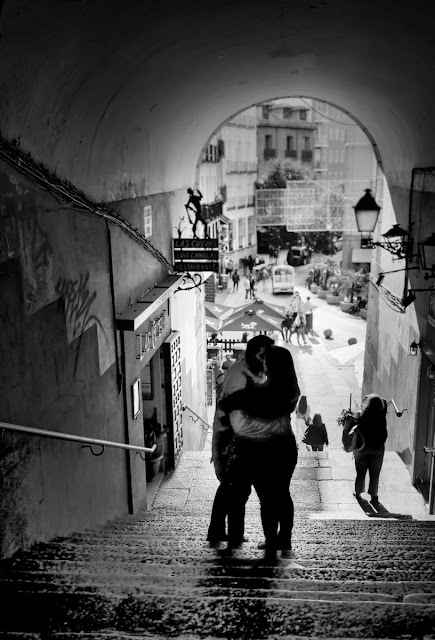 An artist works on a new painting while displaying his other works for sale.
In the background, one can see the residential buildings that enclose the Plaza. 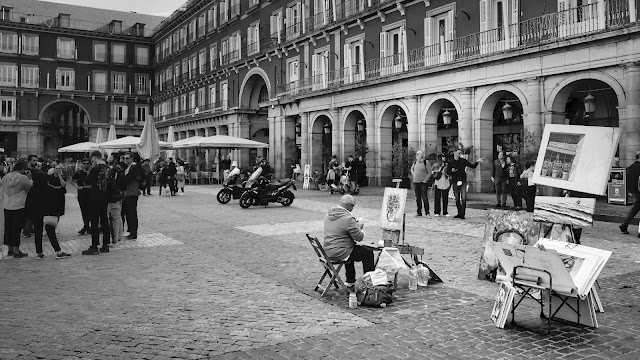 There are pigeons in every major city where there is open space, people, and food.
If the birds congregate together in one spot, they are eating whatever was thrown out or spilled.
They ignore people until someone blindly intrudes, putting them all aflutter. 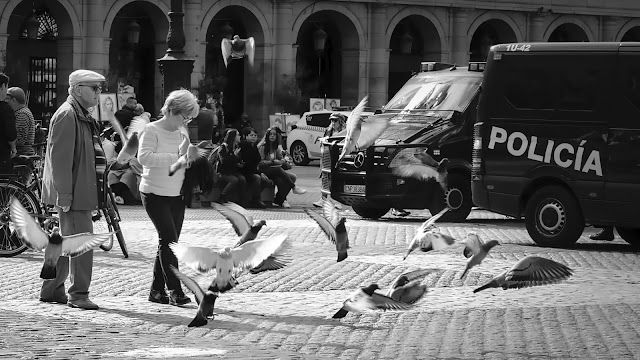 Hearing a loud disturbance at the far end of the Plaza, we wandered over to find
a very boisterous group of Rugby fans in town for a tournament.
All wearing the same striped blue and white shirt.
Loudly singing team songs, chanting slogans, and cheering to raise the enthusiasm of the fans. 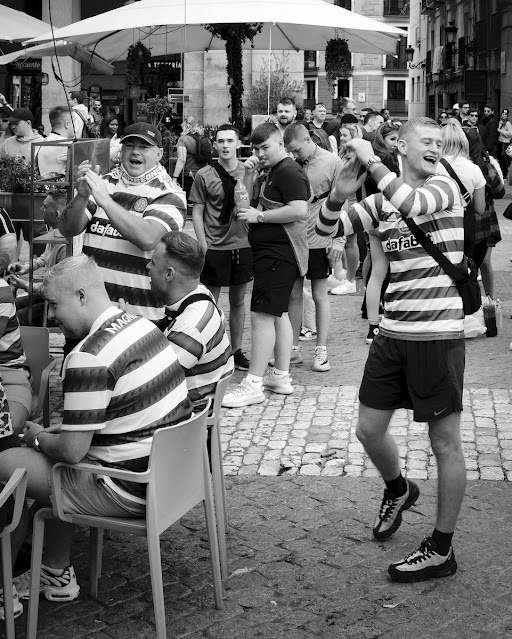 A television station news crew was on hand to film the fans in action. Although, the announcer seemed distracted by the lady fan pushing a baby stroller through their filming setup. 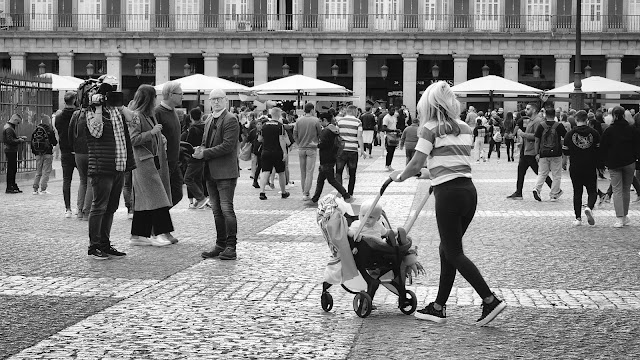 In the middle of the chanting throng was an African vendor trying
to make a living selling sweet treats to tourists.
She was not having much luck with the Rugby people,
who were more interested in yelling and drinking. 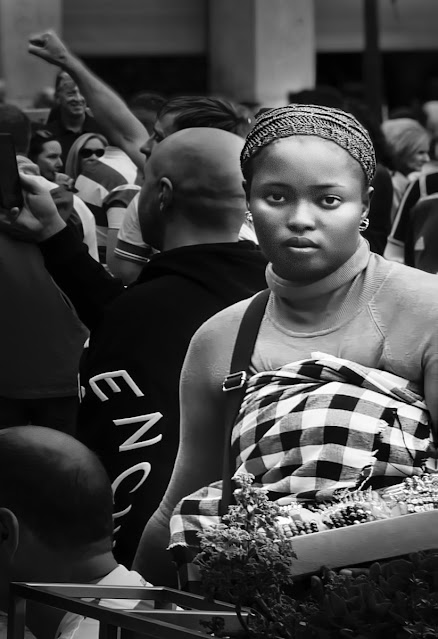 Before leaving the Plaza, A got her Paella...
that looks like a lot of food for one person,
but it is a very shallow pan. 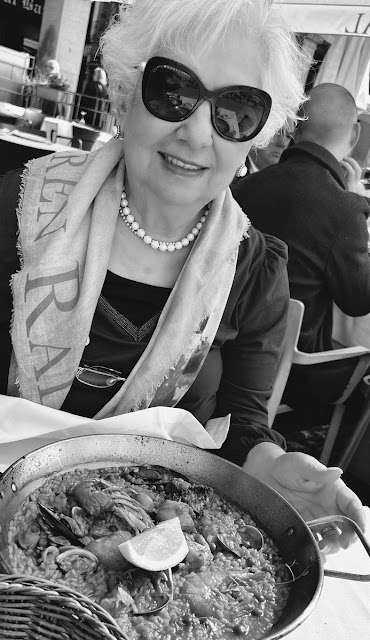 Outside the Plaza, we encountered two boys playing soccer in a back alley.
He has good form and technique. A future pro? 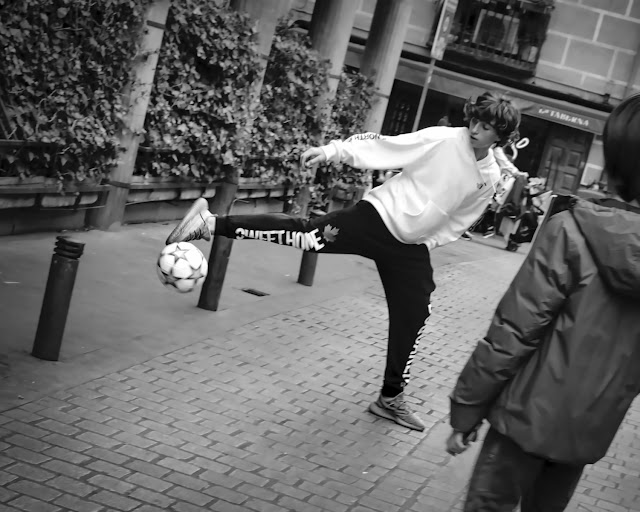 And for the final image from Spain,
while waiting to cross the street outside the Plaza,
spotted two ladies on the other side dressed so differently from each other.
The blonde wore a casual cotton tee shirt and sneakers.
The lady on the left was elegantly dressed for an evening on the town.
The guy sitting behind them was uninterested in either.
Thought the juxtaposition was eye-catching.
Casual, Chic and No One cares in Madrid. 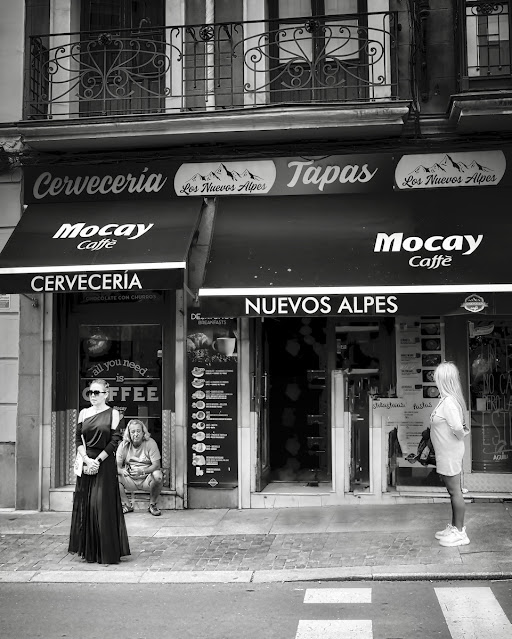 This concludes our 2022 trip to Europe.
Thank you for following along.
CCjon
Posted by CCjon at 12:36 PM