According to legend, one of the 12 apostles', St. James (Santiago in Spanish), body was brought to Galicia, northern Spain. In AD 813 his supposed relics were found in Santiago, where a cathedral was built in his honor.
Santiago de Compostela was Christendom's third most important place of pilgrimage in the Middle Ages, after Jerusalem and Rome. Over half a million persons a year journeyed here from all over Europe. Even today, over 200,000 pilgrims each year travel to Santiago. Many of whom start on the French/Spanish border, taking four weeks to hike the 480 miles across northern Spain following
the renown El Camino de Santiago (the Road to Santiago).
These modern pilgrims are coming from all over the world to make the trek.
In various small villages, we saw solitary pilgrims on the Camino trekking to Santiago.
Carrying their kit and supplies on their backs. 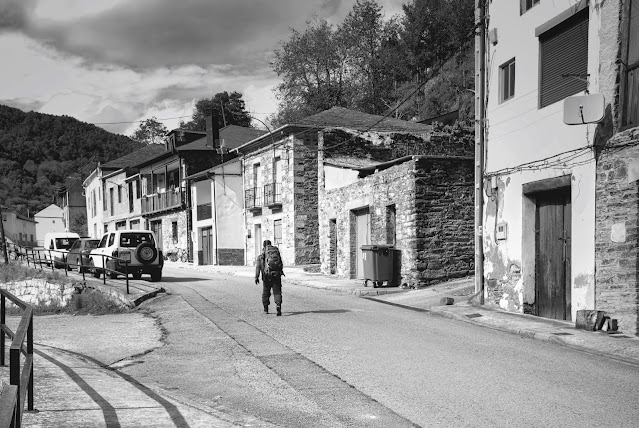 They come from Germany... 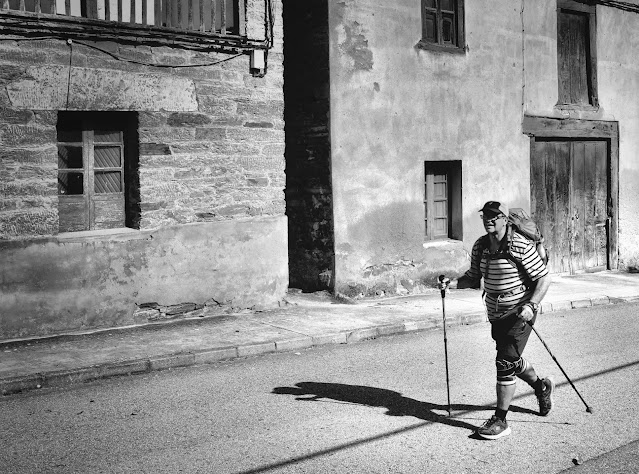 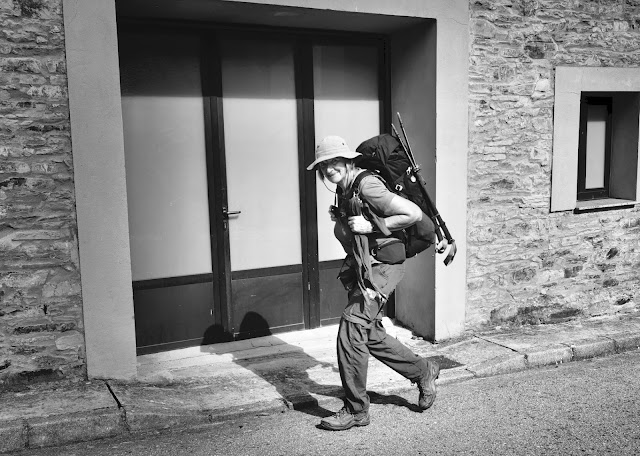 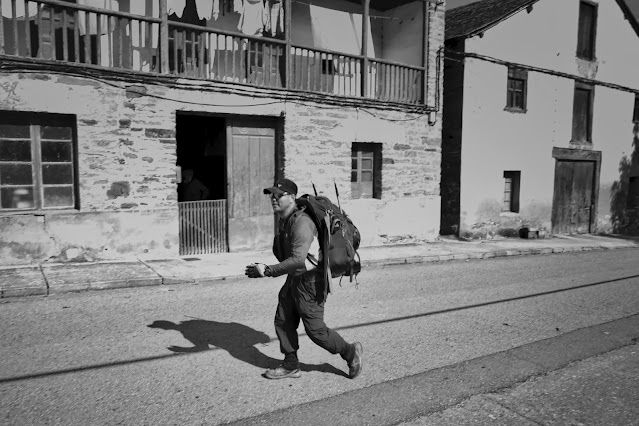 On the path, water trickles from a pipe in the hillside, pooling in an old fountain where pilgrims could refill their gourds. Though the sign on the fountain stated: "Water not guaranteed to be sanitary"
The traditional method was to carry water in dry gourds tied to their hiking sticks,
like the sheepherders did. Today they have canteens and plastic water bottles. 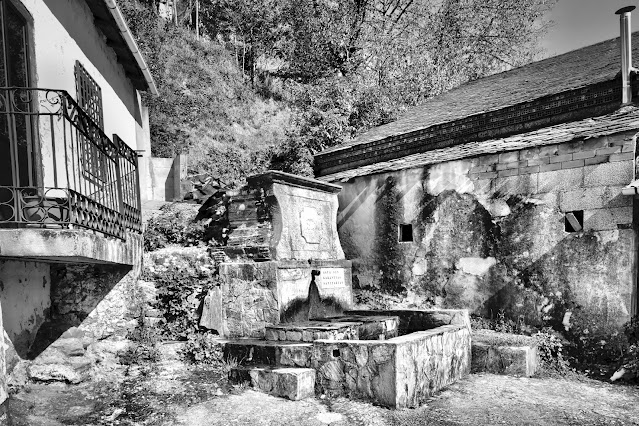 s
As one nears the cathedral in Santiago, the stone streets become narrower.
Many building lining the way have a covered walkway for the pilgrims, as here on Rua Nova. 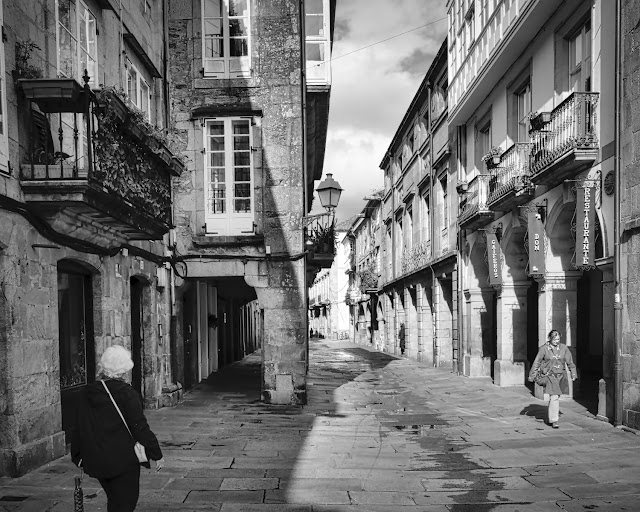 Over the centuries, numerous small cafes sprouted along the path to feed the pilgrims.
One can either dine in the bright sun or under the arch covered walkway. 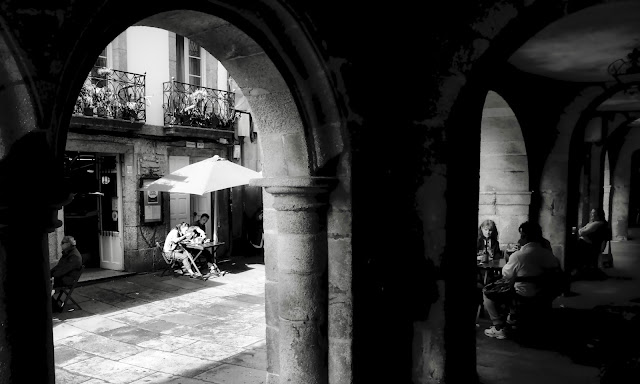 A historic stone fountain in Praza das Praterias
on the back corner of the cathedral, welcomes the arriving pilgrims. 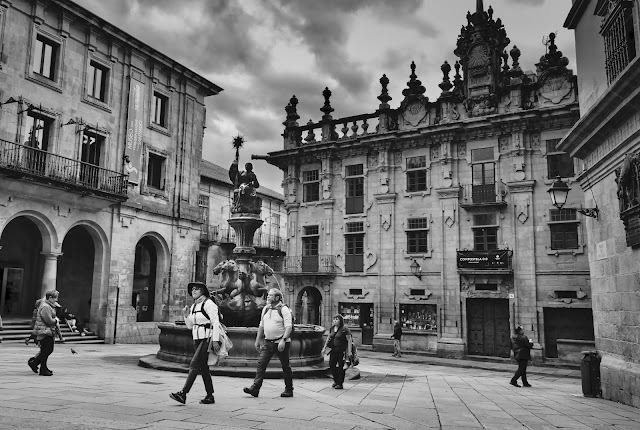 Today this Praza is the entrance to the cathedral, so is a common location
for those who have made the trek to regroup before entering the main Praza a block further. After hiking many miles as a group sharing pain, thirst and cold,
for camaraderie they want to enter the Praza together. 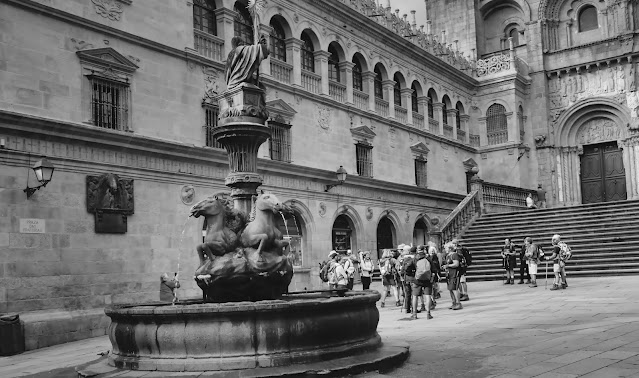 What the pilgrims first see when they turn the corner to enter the Praza do Obradoiro...
One of the finest squares in Europe. 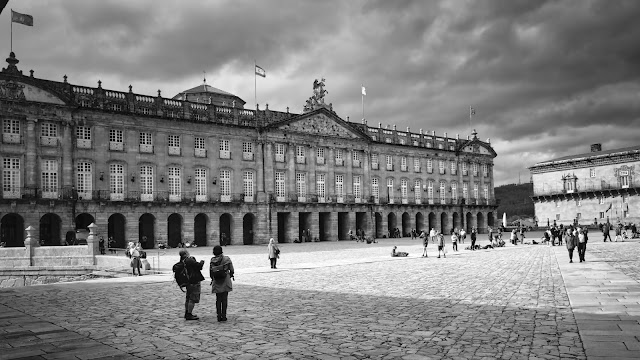 Looming on their right is the impressive cathedral of Santiago (Saint James)...
they know now that their quest to reach the site of his tomb is "fait accompli". 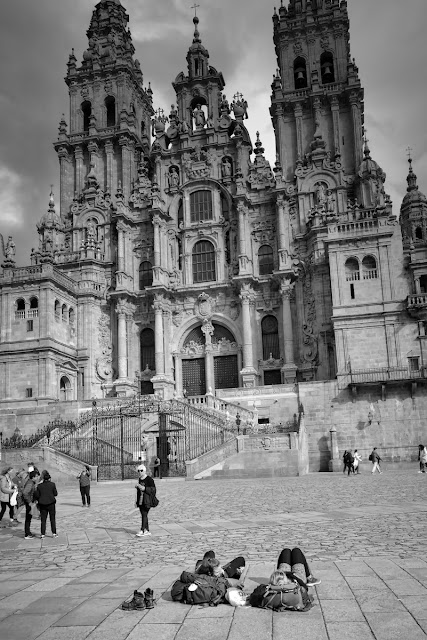 Some pilgrims just want to lay back, relish at the sight of the cathedral,
others are overwhelmed with emotion, having overcoming many hardships together,
realizing they have achieved their quest, hug and dance with joy. 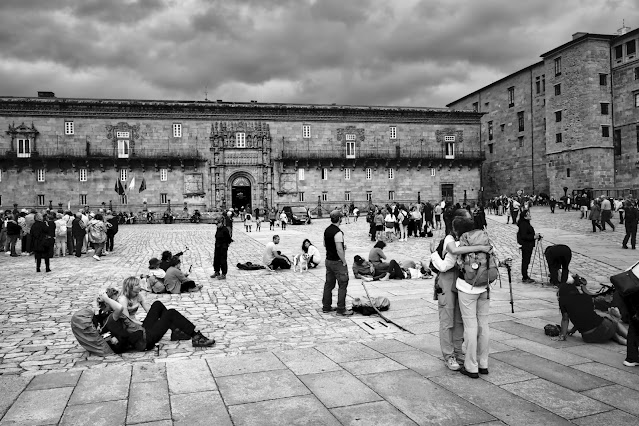 Now to enjoy the moment,
basking in the euphoria of their accomplishment,
hiking boots off, text friends and family of their victory. 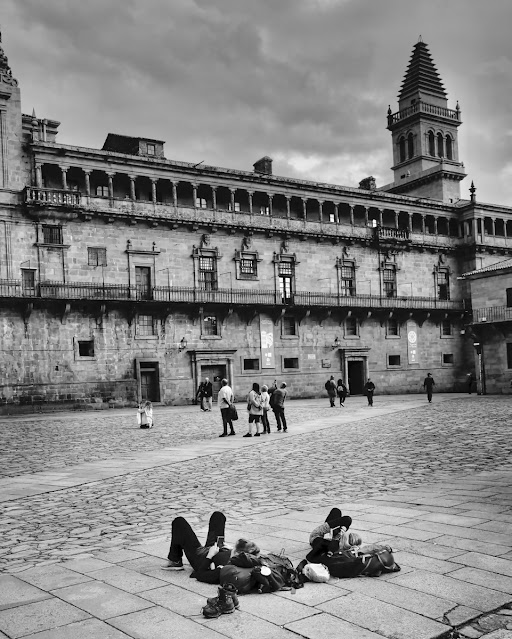 For groups that have made the journey together,
now is a much anticipated time to celebrate
their incredible achievement
by sharing drink and food. 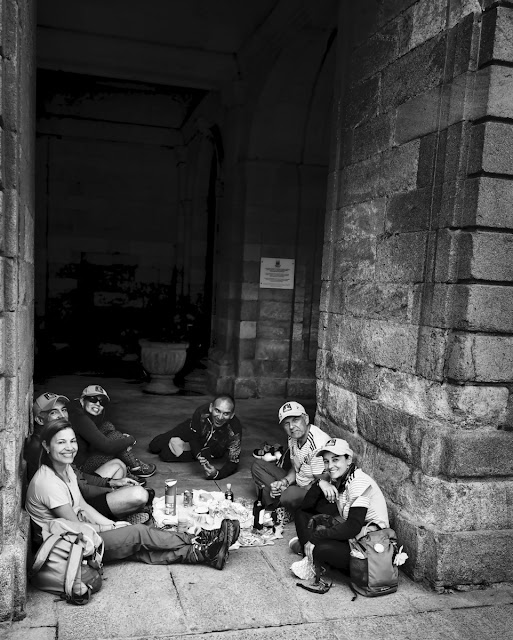 Others nearing exhaustion,
but not wanting this special moment to end too soon,
catnap under a Praza arch. 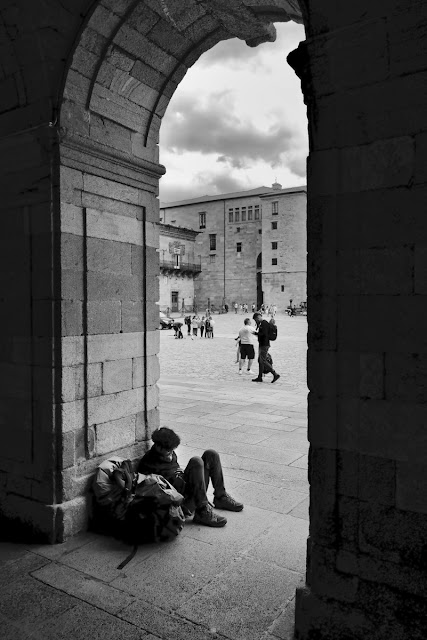 For all who have walked or bicycled the 480 miles of El Camino de Santiago,
over steep frigid mountains, across dusty hot plains, through boring miles of vineyards and grain fields,
for the personal sacrifices made, agony endured, fears overcome, refusing to quit,
my hat is off to you for what you have achieved.
CONGRATULATIONS!!!!!
CCjon
Posted by CCjon at 5:15 AM