We are slow travelers, stopping for gas, coffee and leg stretching periodically. From Santiago, we drove six hours to Playa Barro.  It is located between Llames and Llanes which is between Oviedo and Santander on the north coast.
Sound confusing? It was for the GPS too.
How are we deciding where to go ? Pre-planned? No pre-planning at all. The only thing we decided on before starting was that we were going to explore the north and northwest provinces of Spain
as they were unknown areas to us.
We are booking our four-five day stays using AirBnB. A day to two before we depart to a new area, we look at the weather forecast, the map, think about what we want to see, what is going on in that destination, then search online for a decent priced accommodation that meet our minimum standard: minimum clean one bedroom, one bath, kitchen, wi-fi, secure parking, no climbing of stairs.
We looked at going to Salamanca, but there was a big race going on there this weekend. Most places were booked. We drove north to the central coast area instead.
Arrived late afternoon, walked out on the beach at sunset to grab a photo with the tide out. 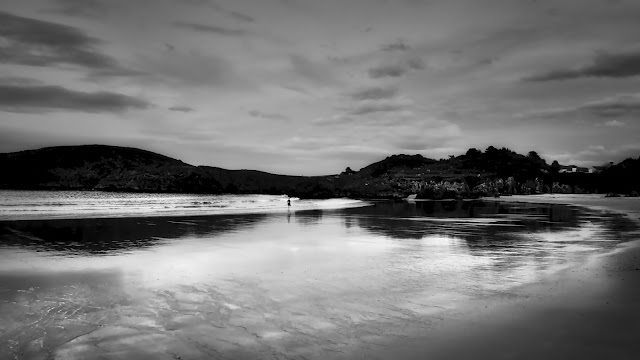 Next morning drove a narrow winding country roads to the closest market. We are running low
on eggs, instant coffee, wine and bread.
Came across this old church with its attached above ground cemetery on a back water inlet... 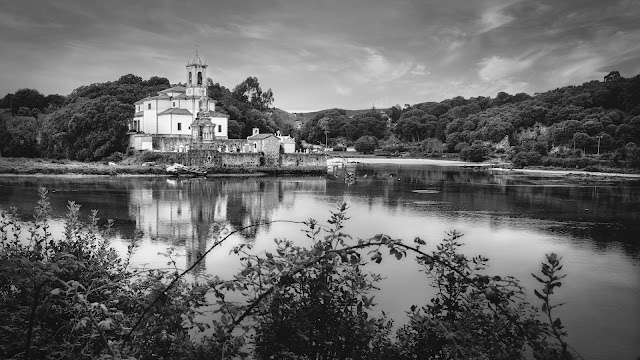 Returned later at low tide, same country church, different angle.
The Bay of Biscay and the Atlantic Ocean lie beyond the far ridge. 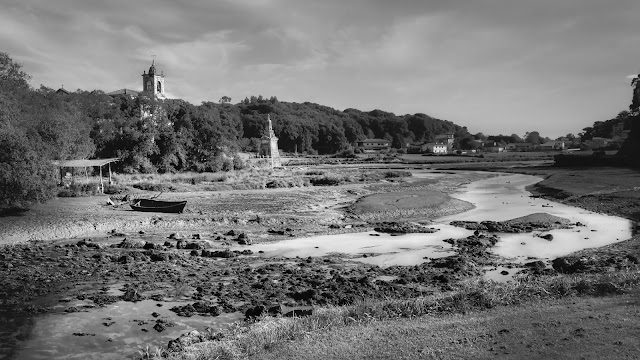 Found a remnant of Roman design granary. The original idea was to store their grain harvest in these small huts on top of stone or wooden pillars to alleviate any moisture problem.
Also to prevent critters from getting in, consuming their winter stockpile.
Today the design is used as an outdoor entertainment patio,
or a mother-in-law apartment upstairs? 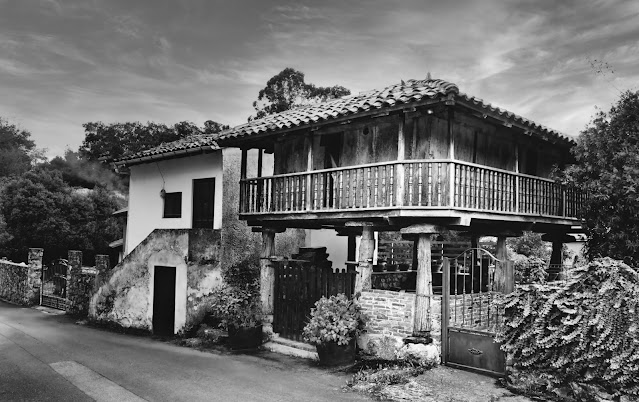 We came across another interesting rocky beach area in the late afternoon.
Doesn't look like a good surfing beach. 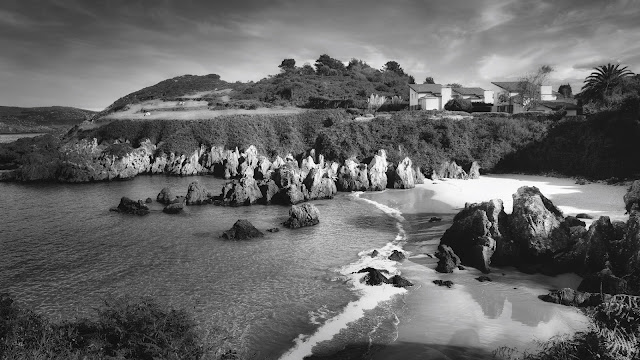 Interestingly, we are staying next door to a surfing school, but have not seen anyone in there.
The waves were not particularly strong here, so it must not be the right season.
***   ***   ***   ***
Near Playa Barro is the small village of Balmori. Did some walking and exploring around it today.
Spotted this old abandoned farm house that had a bit of character to it. 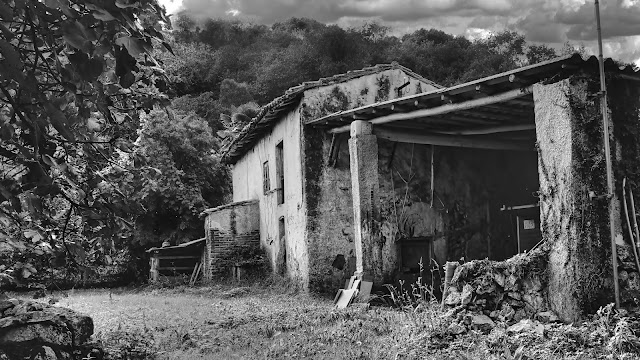 A short distance away stood the simple Balmori village church. Still in use
but nothing fancy like the cathedrals. 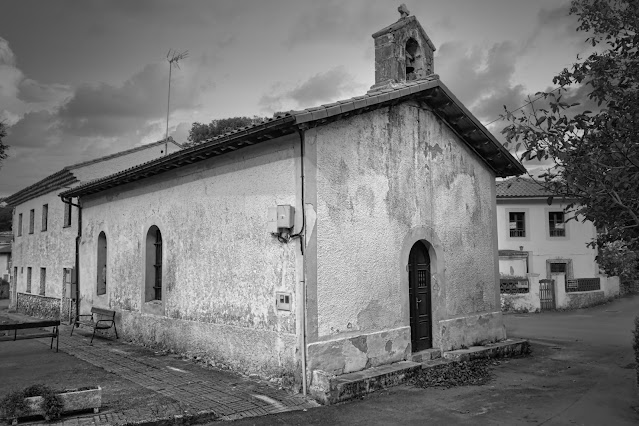 Not many people out this afternoon... one lone bicyclist.
Bicycles are a common mode of transportation in Europe with its narrow streets.
Finding a place to park our rental car is the biggest challenge we have faced here. 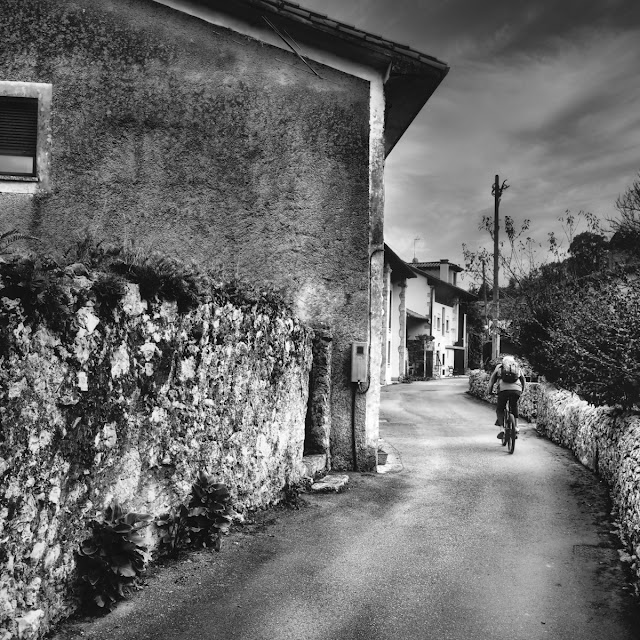 Across the mowed hay field, one can see the cathedral on the bay.
What might look like a road going through to another beach or village on the GPS, often dead ends at a gate or fence? Turning around a car can be a major challenge at times. 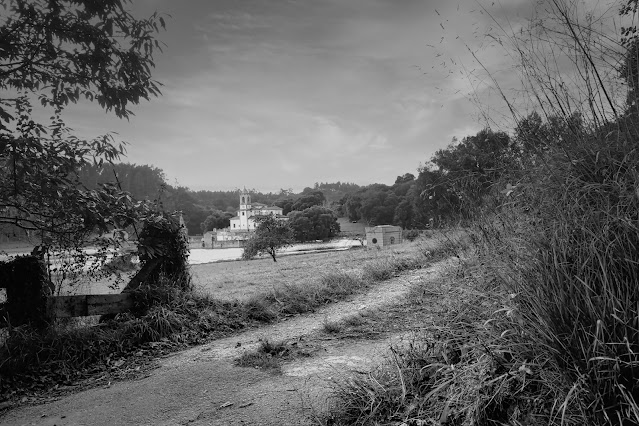 Almost hidden up a country lane was an abandoned home on a stream.
Windows were open but still looked abandoned.
Did not try approaching.
Liked the way the morning sun streamed down through the trees,
dancing across the old stucco walls. 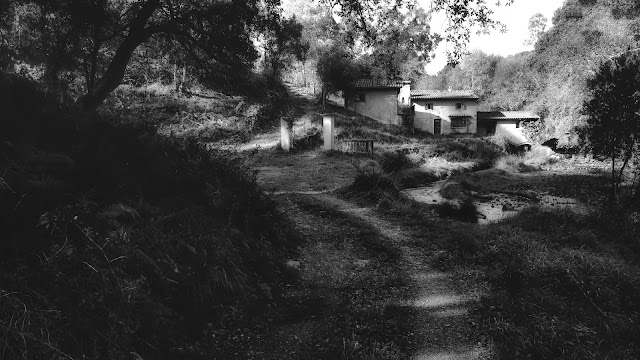 That concludes our time on Spain's north coast. No parades or street protests to declare, sorry.
Tomorrow we return to old town Valladolid to explore a little more,
but in a different neighborhood this time.
CCjon
Posted by CCjon at 6:26 PM