Roaming a new place at night is always an interesting experience. One never knows what one might find. Tonight was no different as I walked to the historic Cathedral.
Love these old streetlamps with their bright yet small radius for illumination.
That hard light, rough stone walls and cobblestone streets give that 1800's feel to a scene. 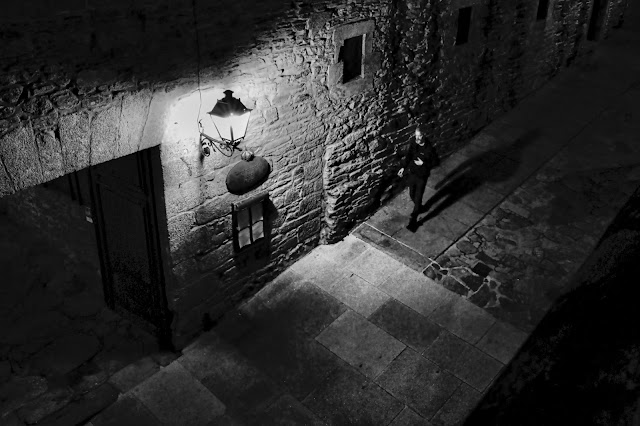 The Santiago Cathedral was illuminated after all.
Since I only travel with a monopod for the camera,
getting a sharp long exposure was a challenge. 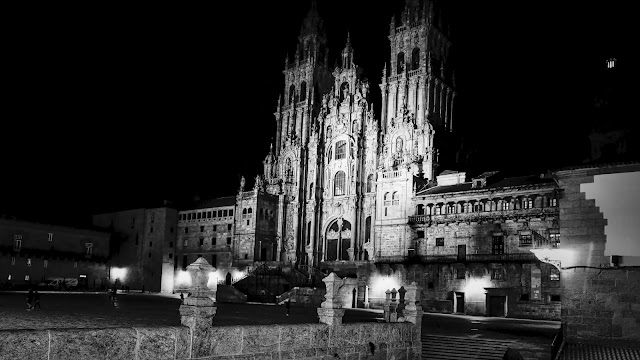 A tall elaborate iron gate and fence protect the church from night vandals. 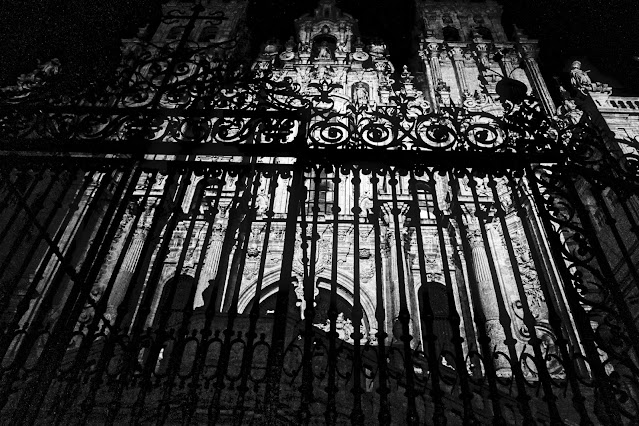 Under a portico across the square from the church was a group of local musicians performing for anyone who wished to watch. Very elaborate costumes, traditional instruments, playing old and new Spanish, Mexican, even Cuban songs for the crowd to sing along.
Clapping and smiling, the tourists were enjoying their show. 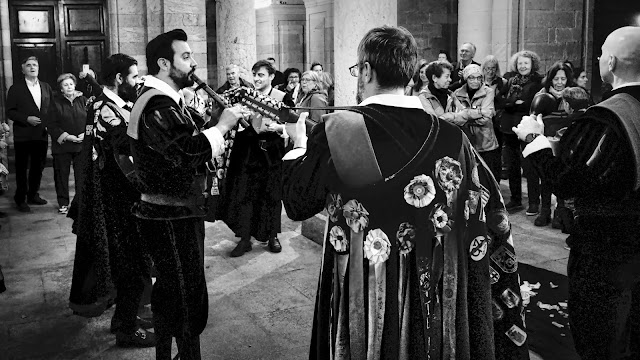 Around the corner from the Spanish group, was a poor lonely hiker
trying to gather a few coins of her own, playing a soft lullaby on a flute for few wandering by.
No smiling crowd, singing, clapping, buying CD's,
she garnered a only few coins. 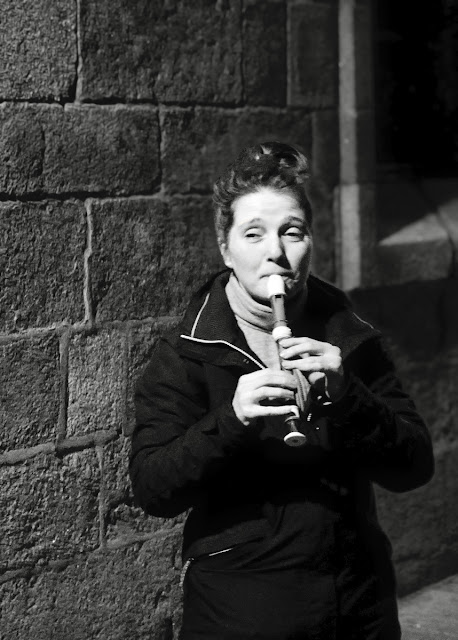 Am discovering is a common scene in Europe,
young lovers finding a dark doorway for romance.
Thinking about it, teenage pregnancies must be much lower here
than in the States, where teenagers have access to a car for their backseat romance.
These couples are the easiest to photograph. With their raging hormones.
they are totally focused on each other, completely ignoring the rest of the world. 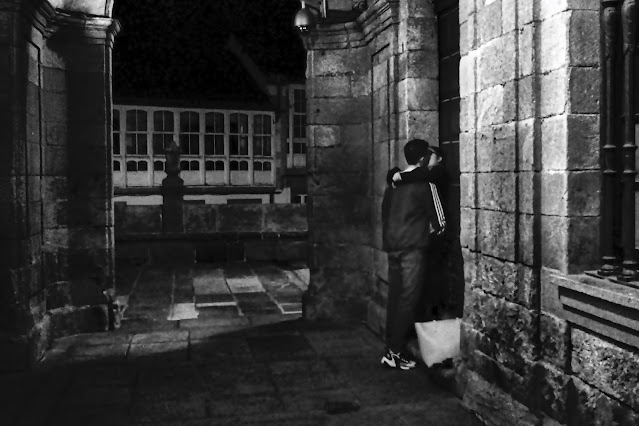 ***   ***   ***   ***   ***
From our balcony each morning, we could watch a street beggar occupy his "seat" in front of a small bank across the street.  Be it cold, windy, dry or rain, every day he was there.
Arriving by 8 am, he would set up, say a pray, cross himself and start the day. In his small bowl were a few priming coins. As passersby dropped coins in, he would wait a minute, look both ways before removing the new coins, leaving the priming coins behind.
He knows his trade and his customers.
His few coins were for "priming the pump" of sympathy.
Here it is common for stores and restaurants to be closed each day from 2 pm until 4 pm.
At 2 pm, he would pack up and leave. Only to return the next day.
He never did return at four. 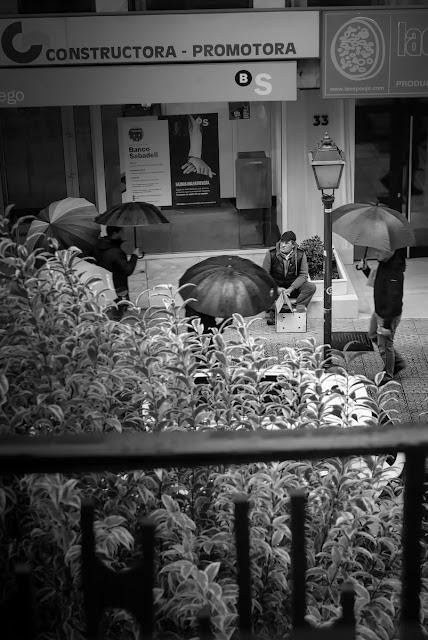 On this morning, a loud disturbance was heard coming down the street,
attracting everyone's attention. 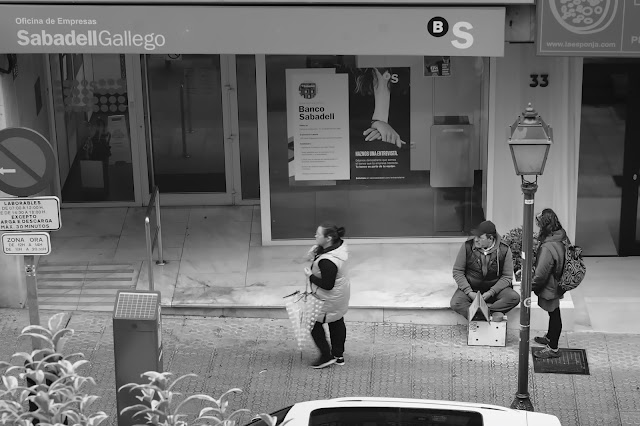 We could hear the noises, shouts and loud voices on a bullhorn from the street though the windows were closed. Seems a labor group decided to protest at a number of bank branch offices on our street.
Their chants of: "Lower Prices - Higher Wages" grew louder and louder.
Here they came... on our side of the street. 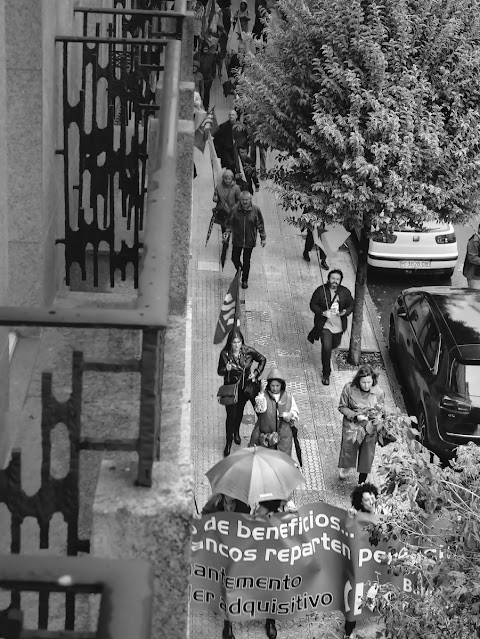 Blocking busy traffic, they flooded the street in spite of the Police van that showed up.
Never saw a policeman step out of the van. 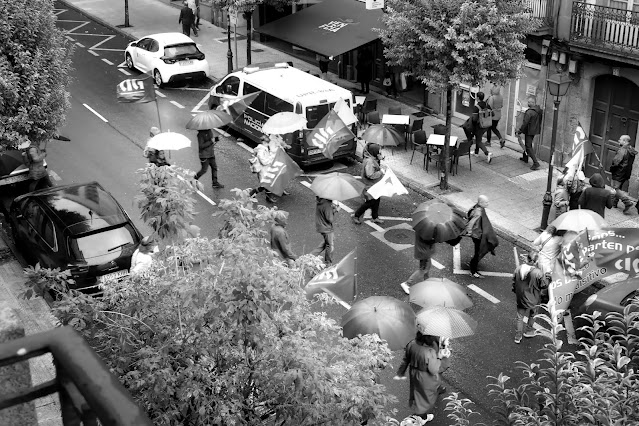 Shouting "Lower Prices - Higher Wages"...
how they thought branch banks had anything to do with broad economics issues like wages and prices was beyond us. Thinking did not seem to affect their enthusiasm for making noise and little else.
For an hour they made a scene, using a bullhorn, chanting their "Lower Prices - Higher Wages" in front of the storefront bank and the beggar. Poor guy, he was losing his meager daily income as people who might have dropped him a few coins were now crossing to the other side of the street to avoid the noisy protest.
Seems the protestors' only accomplishment was lower wages for the poor beggar. 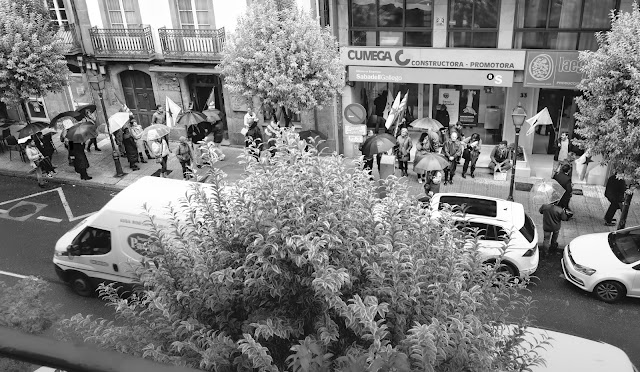 On our last day in Valladolid, and now here in Santiago,
was concluded with a parade or a demonstration...
we wonder what the next stop has in store for us?
Now we are off to Playa Barro between Llames and Llanes,
a small beach enclave on the northern coast of Spain.
Will be looking for interesting Roman structures up there.
CCjon
Posted by CCjon at 3:00 AM