After the 17 day motorcycle tour and the overnight Train ride, am booked in at the Raptor Retreat Big Five Game Lodge for three days and four nights. RR is located near the Kruger National Park where we can make early morning and late afternoon game drives, hoping to get good photos of all the Big Five Dangerous African animals.

The big game hunters classified these as the Big Five because
they are the most dangerous to hunt on foot. Surprisingly, the Hippopotamus is not on the dangerous list though they kill more people than any other African animal.

We will be hunting not on foot, but in a Safari vehicle with a camera.

Arina Botes met the small twin propeller aircraft at the Hoedspruit airport. Learned Arina will be the driver, guide and game spotter on the twice a day game drives for the next three days.
In the hour drive to the lodge, Arina starts my education on African wildlife. She is an incredible source of information on African animal habits, life cycles and food sources.
Her friendly smile and positive attitude made for many pleasant hours while traversing over the rough terrain. Luckily it did not rain the days I was there.

Pulling into the the lodge area, the lodge staff was assembled for a traditional song and dance to welcome each new arrival.  After singing and dancing, back to their regular duties. There are only six staff persons, plus Arina, the lodge manager,and the two owners here to take care of their guests needs. Raptor Retreat is a small lodge that can only handle 8 to 12 persons at a time.  It is in a remote section of the Parson's Game Preserve which joins the Kruger. 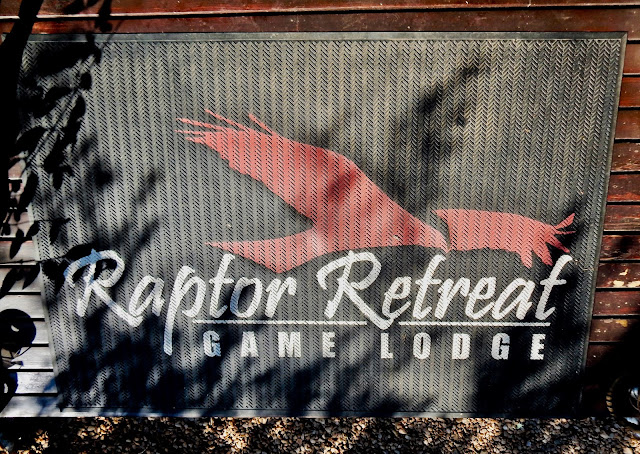 Alighting from the car, the first sign says it all.
Learned that guest under the age of 12 are not accepted here. Too dangerous!
Signed a release saying if I get eaten by an animal, don't come crying to them....
more or less that's what it said. 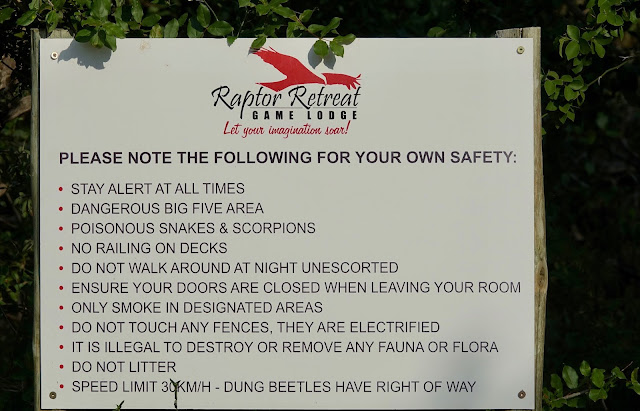 Walking into the main Lodge, am greeted by Yolande van der Merwe, the lodge manager. Not only a very pleasant person with an engaging smile, Yolande is also very knowledgable of South African wines. She makes every guest feel special and welcomed. 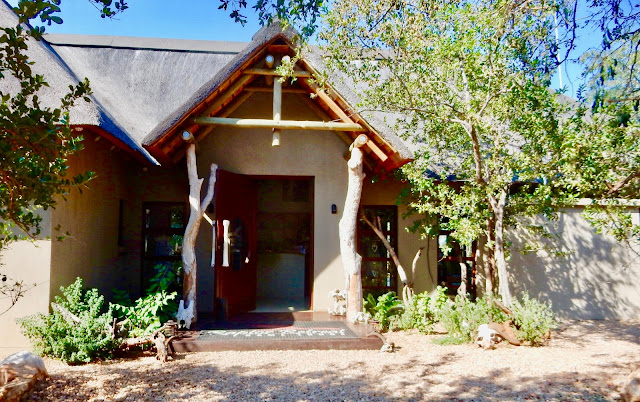 The rustic lodge exterior does not prepare one for the luxurious decorations and furniture inside. The lodge owners, Keith and Sharmaine have created an oasis in the wild, a labor of love. The attention to detail and decor is seen in every room and cottage. Many of Keith's photos decorate the walls, Sharmaine's decorating touches make for a visually pleasing experience.

Sharmaine says they are working to expand the number of cottages so they can grow. 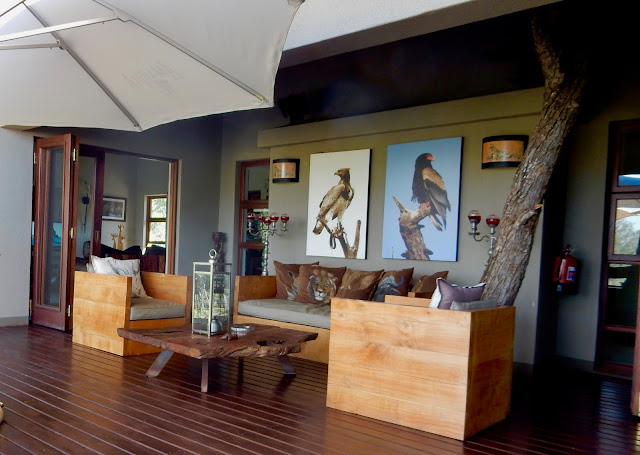 Led to my cottage for the next four nights, Yolande explains the rules.
Never go unescorted on the grounds at night.
Never walk past the lodge's low fences, day or night.
Never.. while she talks, I get excited to see a herd of Impala grazing just 50 yards from the lodge.
Never leave your doors or windows open when not in the cottage.
Birds, monkeys and others will enter looking for food or shiny objects.

Am informed I am the only solo guest here.
There are three young couples here, some on their honeymoon.
One from Italy, One from Holland and one from San Francisco.
Since we all eat at the same big table for breakfast and dinner, I hear their stories and experiences.
Several of the couples will join in on the game drives.

Being in the bush, the closest store is a good 45 minute drive away.
The fridge in each unit is fully stocked with water, beer and sodas.
Bottles of wine can be purchased from Yolande.

The large bed has mosquito netting that is closed around the bed
when the staff turns down the bed each night.

Shower to the right. Bath tub to the left. 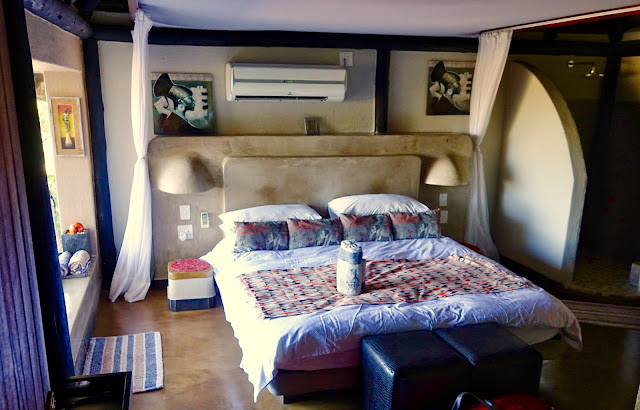 The tub has windows on three sides for the full bathing experience with  nature.
No blinds or curtains here.
I opted for the shower with walls. Must be that midwest upbringing.

The watering hole beyond is where animals come to drink night and day. 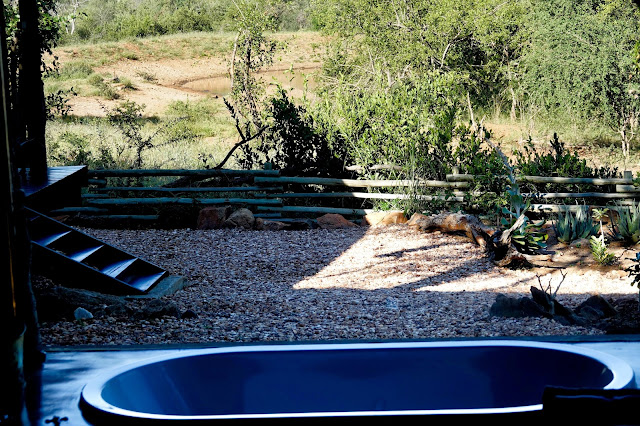 Each room has their own private swimming pool. Keith said some guests wonder why their pool is only half full in the morning. That's when he explains that the elephants will come in the night and drink the pool water.  Elephants don't know the difference between a watering hole and a swimming pool.

Because the smaller cottages are occupied tonight, am placed in a larger two bedroom house for two nights, then will move to a smaller unit. This weekend is a long four day holiday for South Africans. It's when many travel to the Kruger to escape the city.

Though I am a traveler, I assured Yolande I would not sleep in every bed in the house. 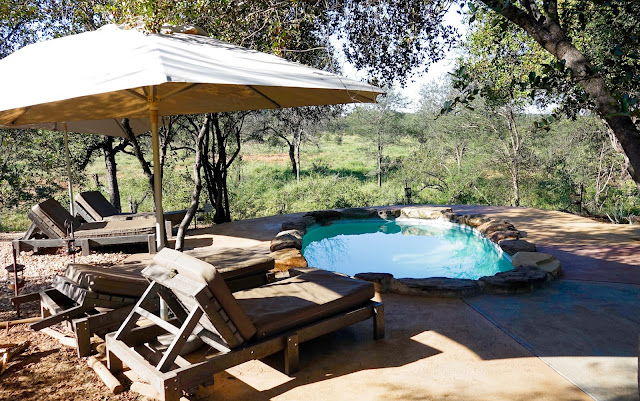 While unpacking, a bird tried to fly into the room. A banana beak bird, same type of bird that tried to steal my keys the third night in Africa. They like to grab shiny objects. 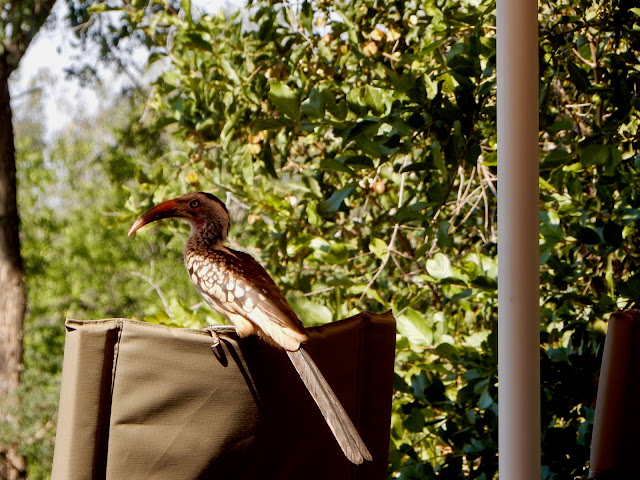 Back on the main lodge deck, again spotted the resident Impala herd. Keith explained, normally Impala are not tame, but the matriarch of this herd he raised from a fawn when she was orphaned. She now keeps her herd of offspring near the lodge. She will allow Keith to still pet her, but none of the other Impala will permit touching. 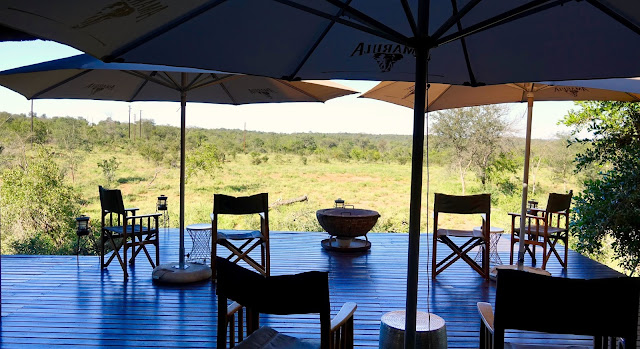 The resident Impala herd has one male Buck who tends to his harem. The rut or breeding season is on this week. Daily we can hear the buck loudly short and grunt like a pig as he chases a female trying to determine which one is ready to be bred. 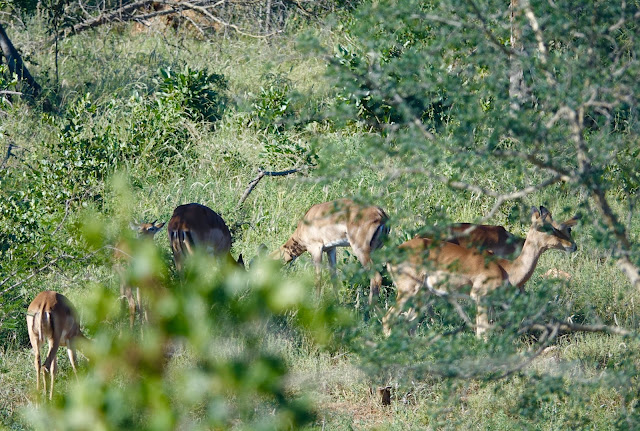 Out from under the lodge deck emerges a warthog family. Also lodge residents.
Mama, Papa and six little warts.

Walking to your cottage in the dark after dinner, it's not these animals you have to worry about, though they can give you quite a start in the dark.

Yolande keeps telling people, "We are in a Big Five game preserve. Lions and elephants have been seen inside the lodge area, day and night. Evidence of their having been here is easy to see.
More on that later. 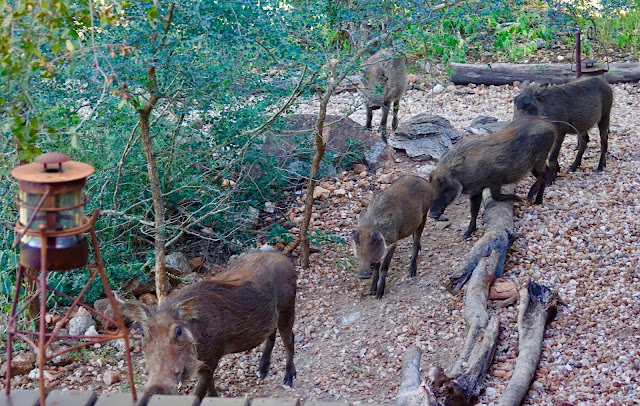 Informed Arina I would rest that day and start with a game drive in the morning.

After a delicious five course dinner with excellent South African wine, returned to my room. Flipping the outside light on, spotted a civet exploring in the dark A civet is a cross between a raccoon and a badger. Arina says they are a very secretive, night creature. Seldom spotted. Hope this is a good sign we will find our Five.

Turned on the back patio deck light, fell asleep watching the bats swoop thru the light
grabbing insects with each pass. Well, they need to eat too.

Must have awaken at least twenty times that night,
each time peering out to see what might be lurking around.

Nite all... tomorrow we look for the Big Five.