In order to see the animals before they bed down for the day,
one must be out in the bush at sun up.

We awoke at 4:30, the safari guide picked us up, by sunrise we were in the park looking for the animals Africa is so famous for having. 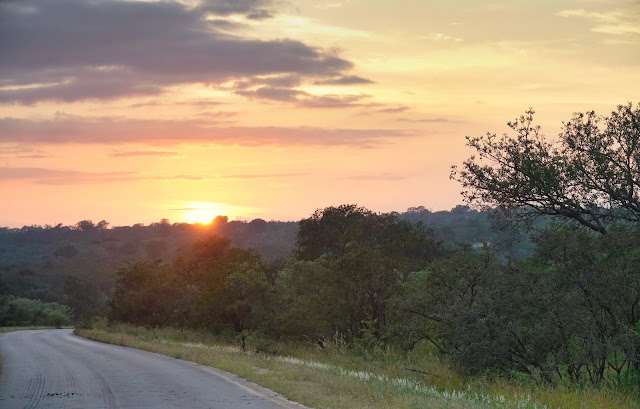 The Kruger is huge. It is one of the largest game reserves in Africa, covering an area of 7,523 sq mi in the provinces of Limpopo and Mpumalanga. It became South Africa's first national park in 1926.
It has more square miles of land than the states of Rhode Island and Connecticut combined.
North of the Kruger National Park is the country of Zimbabwe and to the east is Mozambique.
The park has savannas, plains, forests and jungle so all types of species can thrive and survive in what is their normal habitat. 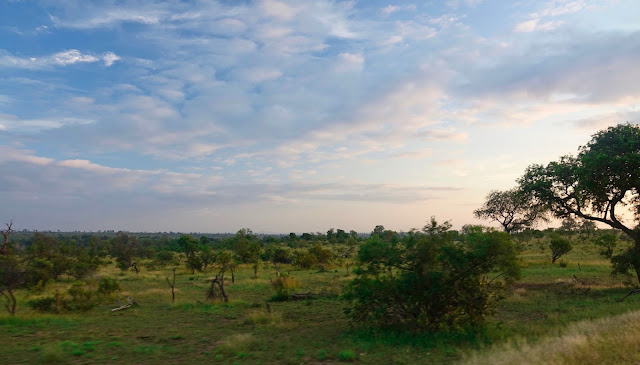 What we started seeing was not only the big animals but the small ones too. Many young animals or babies were spotted. So this became a tour of the youth of Africa.

Mama Giraffe watches as her baby explores his surroundings. 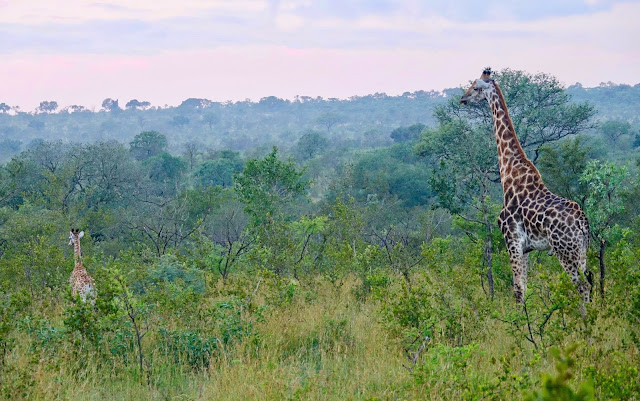 A juvenile Kudu peeks around the bush at us. 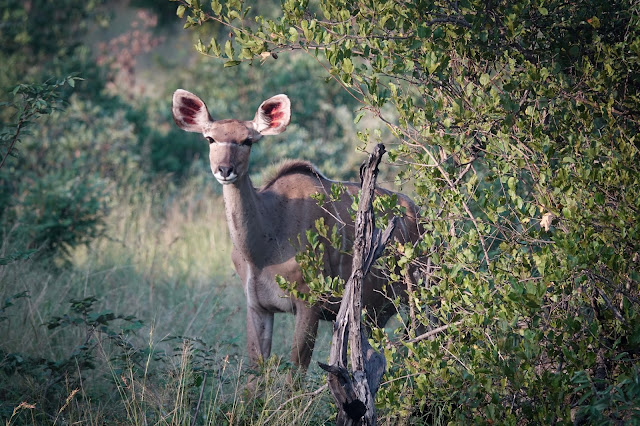 This young male zebra was more interested in us than in eating. 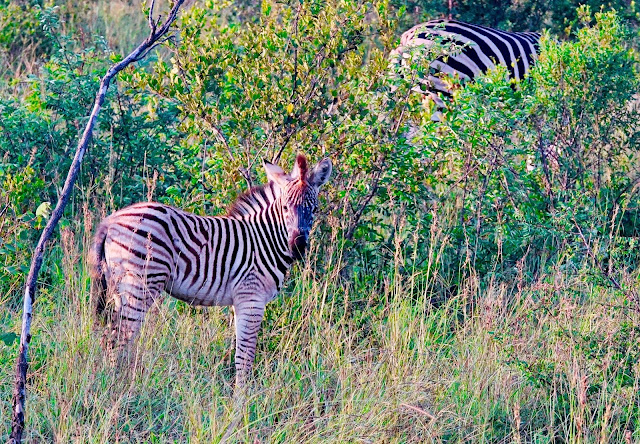 The herd stallion watches over the baby who was watching us. 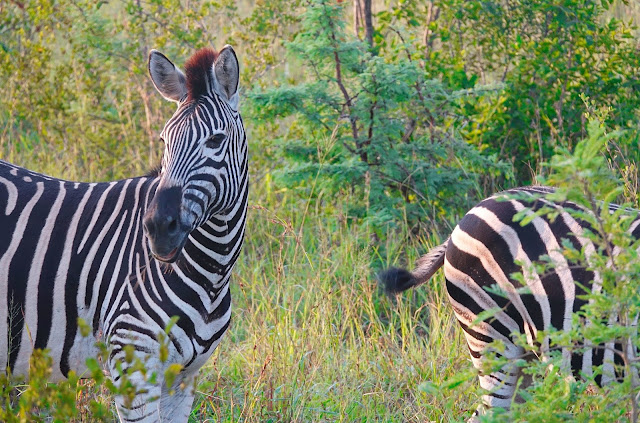 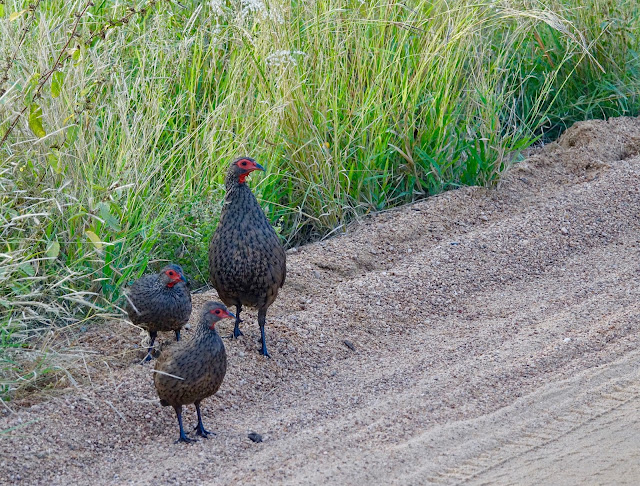 Mama Warthog with two of her four babies. 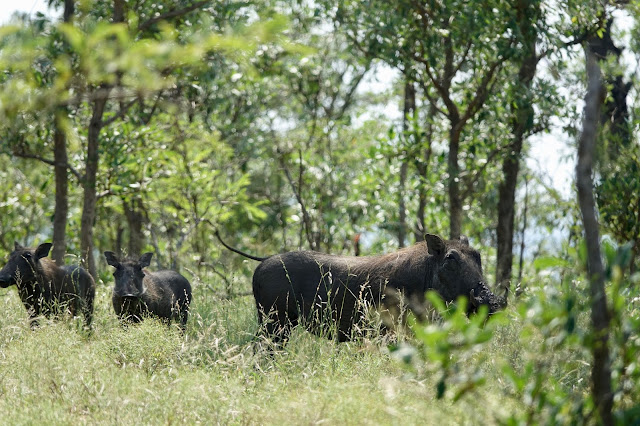 Mama zebra with two foals. Maybe she had twins, one male and the other female?
They look the same age.
Guide Julian says zebra only have one foal at a time, so this must be a friend. 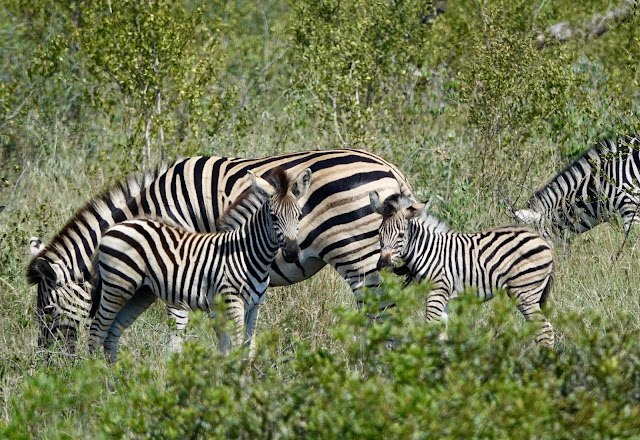 Also saw one of the oldest mammals in the park crossing the road, a leopard back tortoise 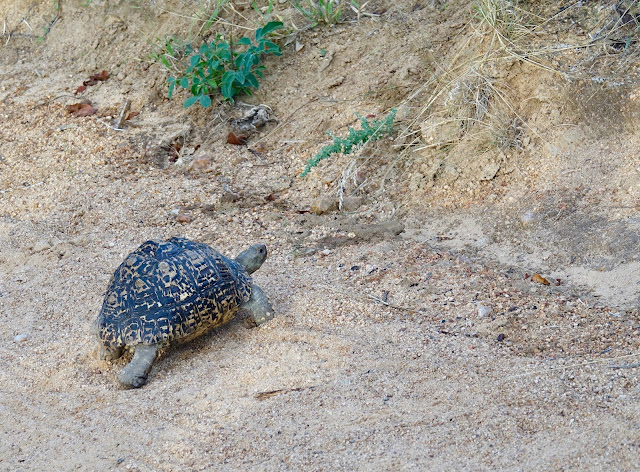 We approached a large watering hole just as the herd of buffalo is starting disappear into the bush. 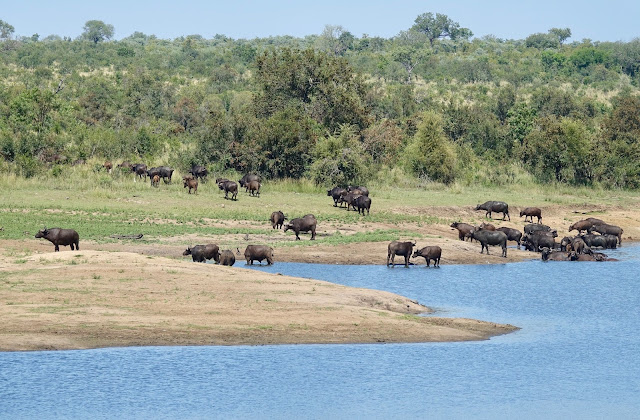 A Duggar Boy, an outcast bull from the herd, enjoys his mud bath. 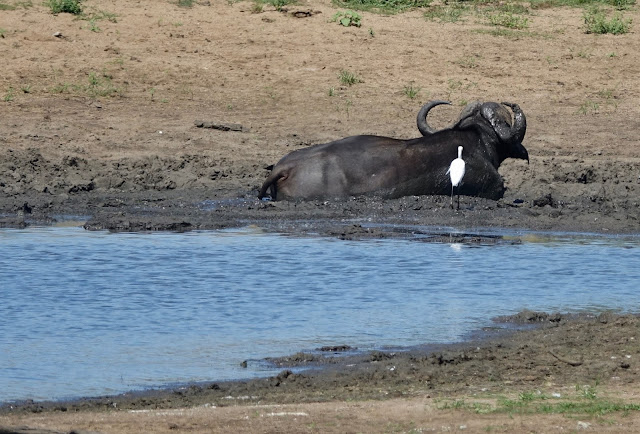 This cow wasn't finished with her breakfast. 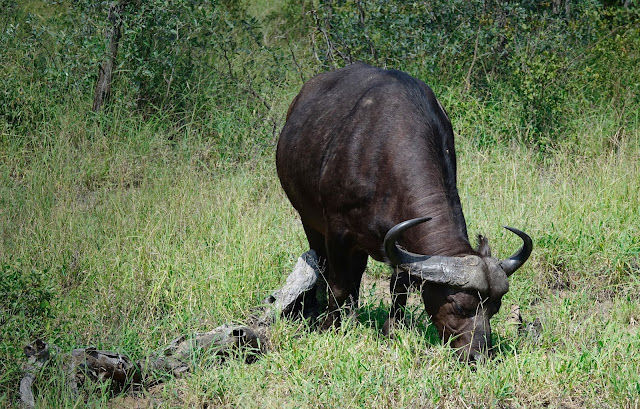 The herd was totally unconcerned with the big crocodile in the water near them.
Crocs look just like the mud bank to the right. 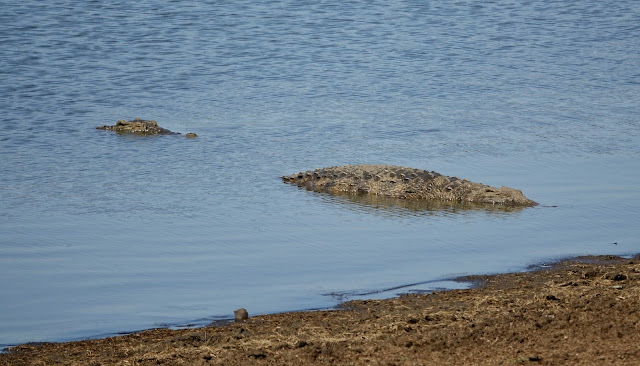 We heard a group of vervet monkeys making a racket, tried to take a photo but they were jumping around so much playing, the photos were a big blur, except of these one. 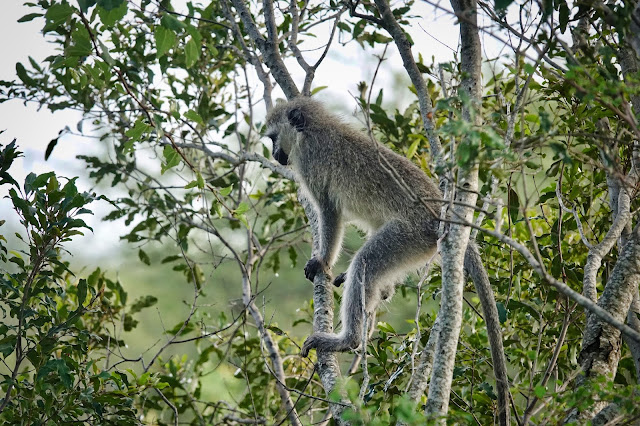 Rounding a bend in the road, stood an elephant out in the open.. 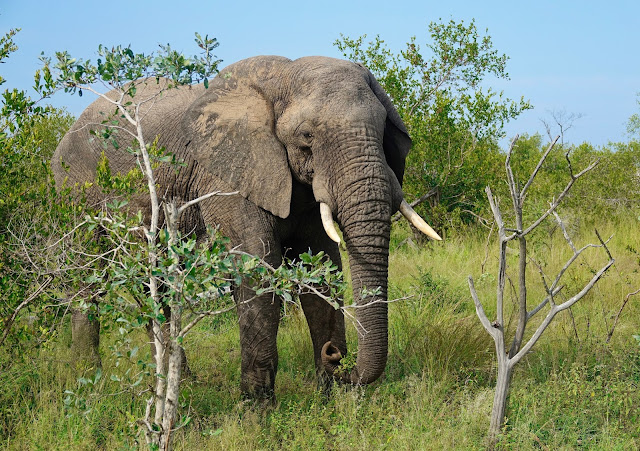 Even allowed us to stop and take photos as he ate leaves off the brushes. 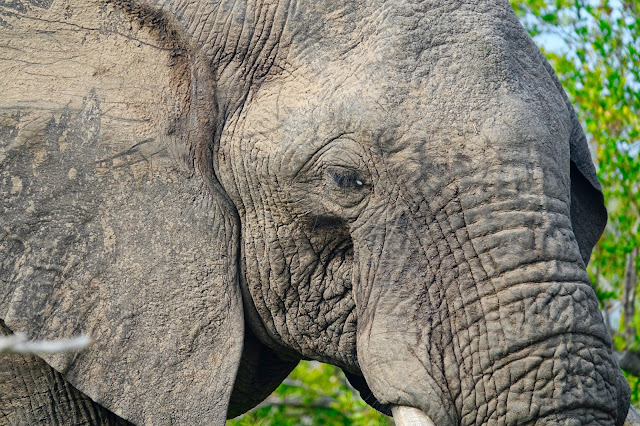 A little further we saw an elephant brushing his teeth on a tree.
Okay, not really, but he was rubbing his tusks on the tree trunk.  We saw many trees like this one with the bark rubbed off.  It's where the elephants used a tree to clean their tusks or remove mud or scratch an itch. 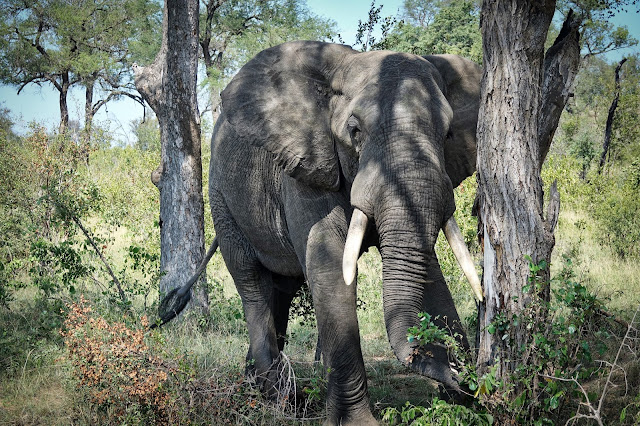 Through another guide, we heard there was a lion near the road. We rushed over to where the lion was, only to find a half dozen safari vehicles all jammed into the same spot. All trying to get a view of the lion for their clients. We could see what they said was a male lion lying in the shade under some brush, but couldn't really see any details. Was it a lion or just a lump of fur.  One thing was for sure. No one was going to walk over and kick it to see if it was real. We all stayed in our vehicles.

I asked the guide why would the lion tolerate so many vehicles so close, with so many people talking, making noise, all disrupting his nap?
The guide replied, "He's the King of the Jungle. He can do anything he wants."

We left the jungle traffic jam for others.
Rounding a bend the guide slammed on the brakes as he spotted a lioness with two cubs walking toward the road. She stopped, I snapped this photo while the two cubs stayed hidden in the long grass. 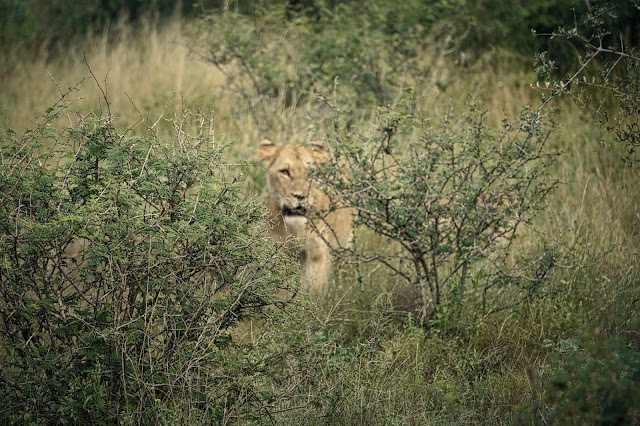 A noisy diesel safari truck pulls up behind us, spooking the lioness. She turns, leads her cubs away from the road, into the brush for safety. 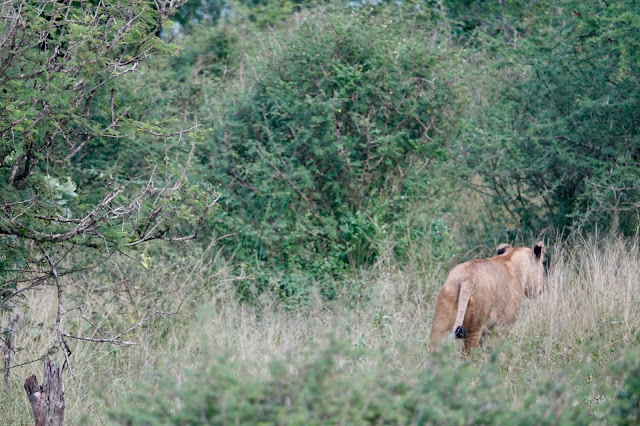 Was a great visit into Kruger. Tomorrow we continue on with our ride across South Africa.