Early morning departure, riding the five kilometers out of the Umngazi Lodge to the main road, we encounter no fewer than cattle, horses, goats, and pigs either blocking or crossing the roadway. 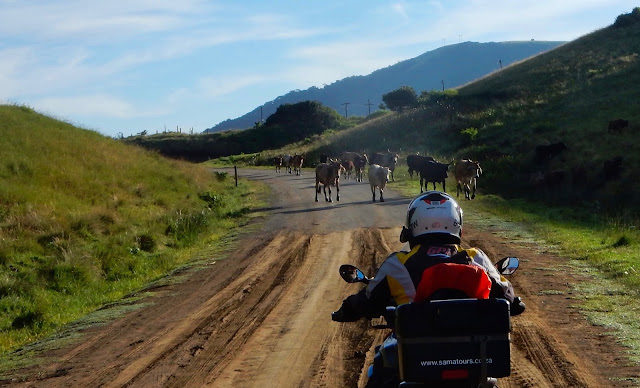 Not quite out of the KwaZulu-Natal lands 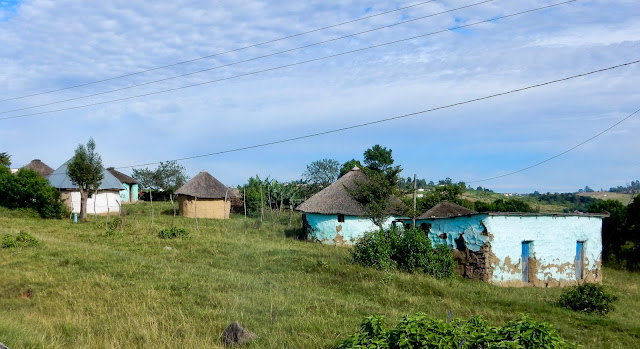 Interesting gorges and canyons along the coast 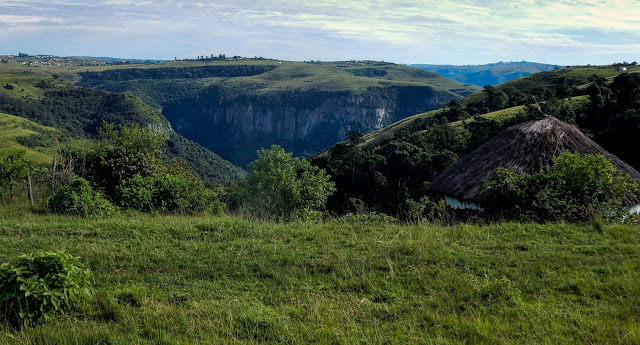 When stopping for fuel, the attendant must fill our tanks.
We are not allowed to do it ourselves. So we tip them with small change.

We fill all three bikes at the same pump and put it on one ticket.  SAMA Tours includes the gasoline in the tour prices so we don't have to worry about change or credit charges. Since we are all riding the same bike, BMW 1200GS, we all need fuel about the same time.
Georg seems pleased to have someone fuel up his bike for him. 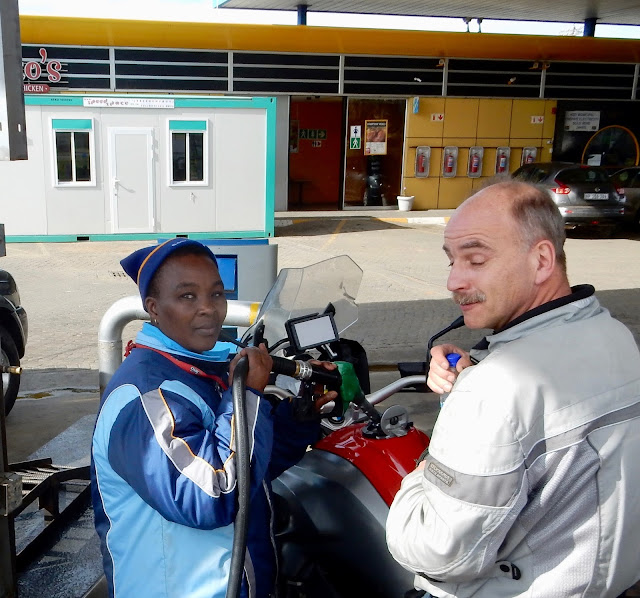 The brightly painted building among the houses is a tavern. 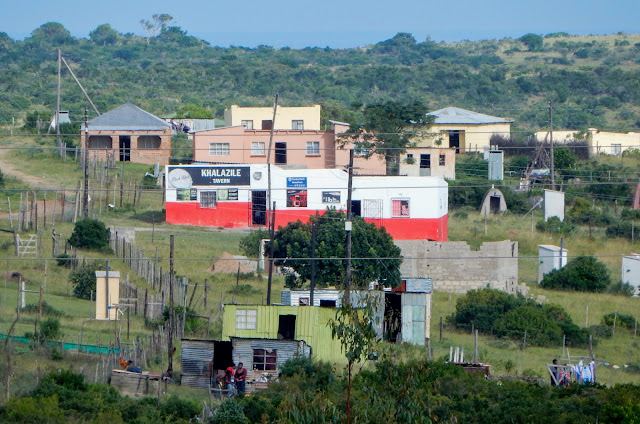 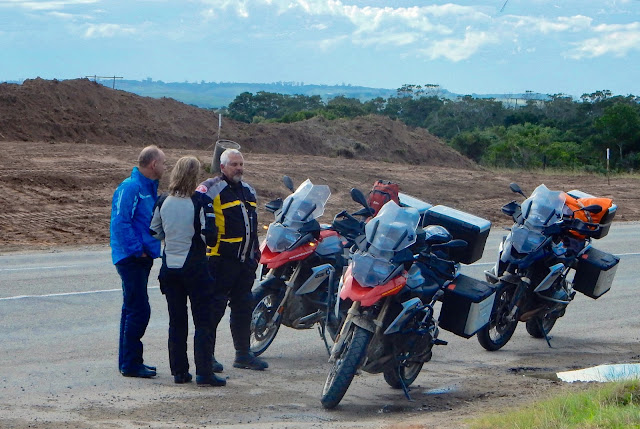 More roadside hazards. Watch the whole herd as you are not sure which one might try to run out in front of you. 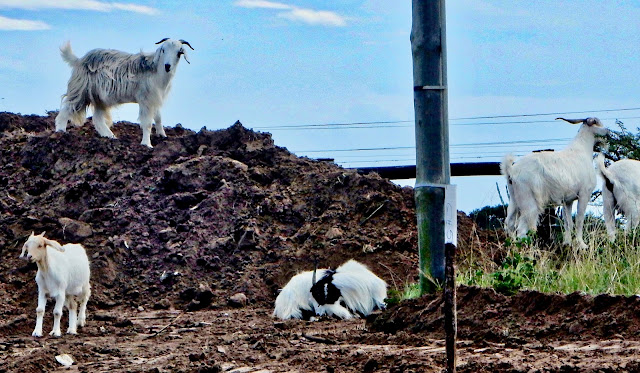 No swimming here, waves are too high in Port Alfred.
Then why to they have a lifeguard shack if no one is allowed to swim here?????? 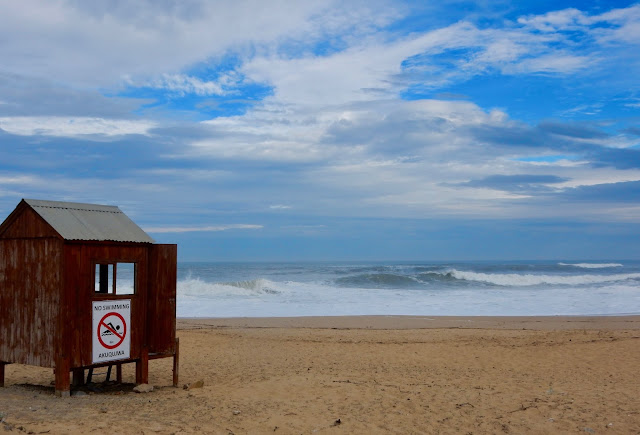 Waves crashing over the pier. 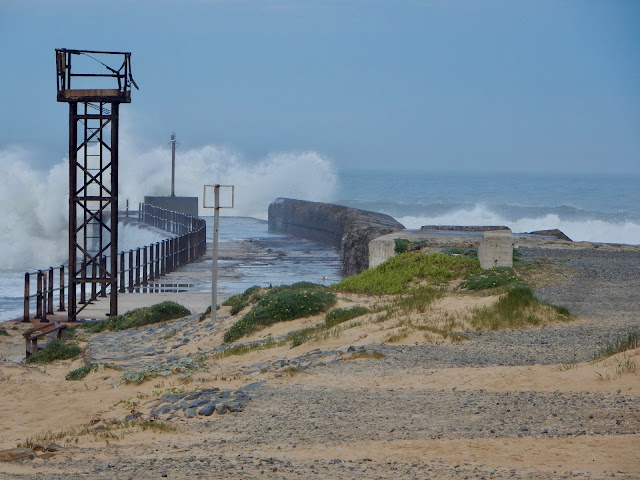 Day 12: Change of scenery in Knysna

As we ride further west, the farms change, the scenery changes,
towns are more modern, we see more motorcycles on the road. 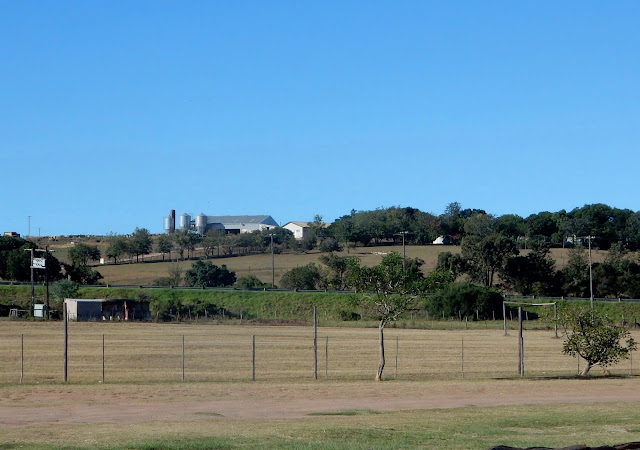 From narrow two lane country roads to a divided motorway.

...except when we talk a detour. Julian knows where all the best photo ops are. 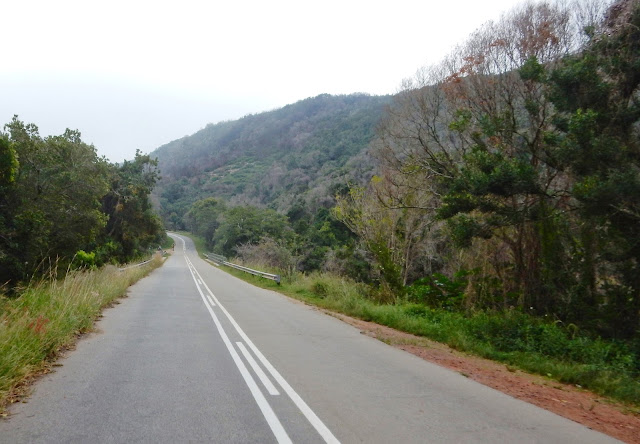 The day could not make up its mind, was it going to rain or not?  Rain suits on, Suits off. On. Off. 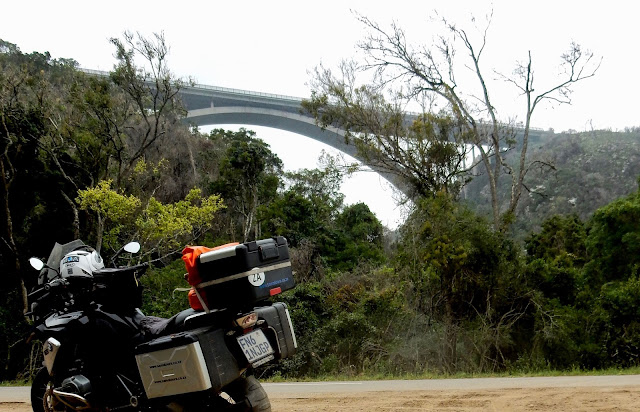 Country lanes are for exploring. 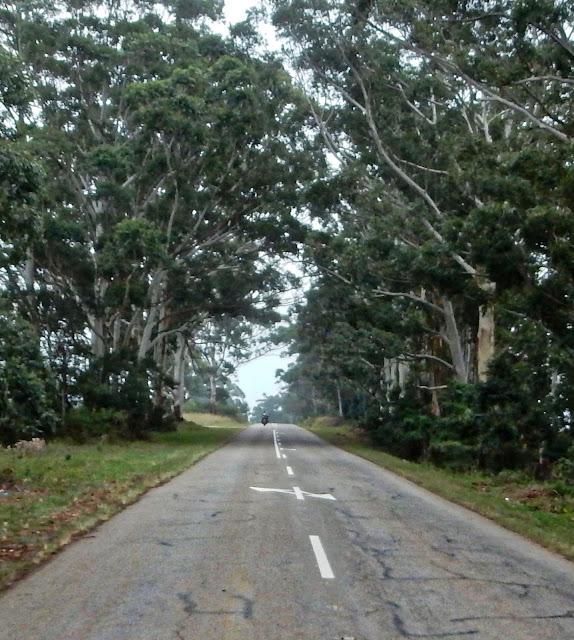 A narrow single wide bridge leads out into the open flat farm fields. 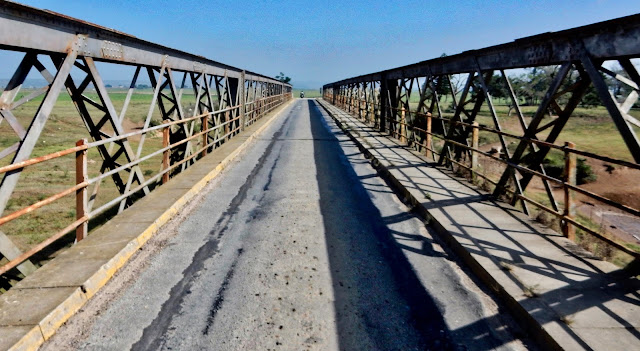 Next up, the highest bridge in South Africa, the Bloukrans Gorge bridge.
The big trucks crossing the bridge look like toys.

Stopped here only to hear.... screams. A lady screaming as she falls off of the bridge down into the gorge. 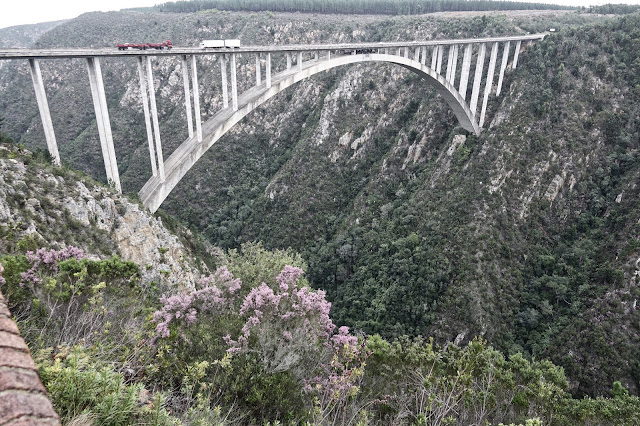 Then laughter as she realizes the bungee cord stopped her from hitting the rocks below. She had just jumped off the bridge on the highest bungee jump in the world, 214 meters (702 ft) to the bottom.
And paid good money for the thrill of hurtling thru space to a certain death,
only to be snapped back up like a yoyo. 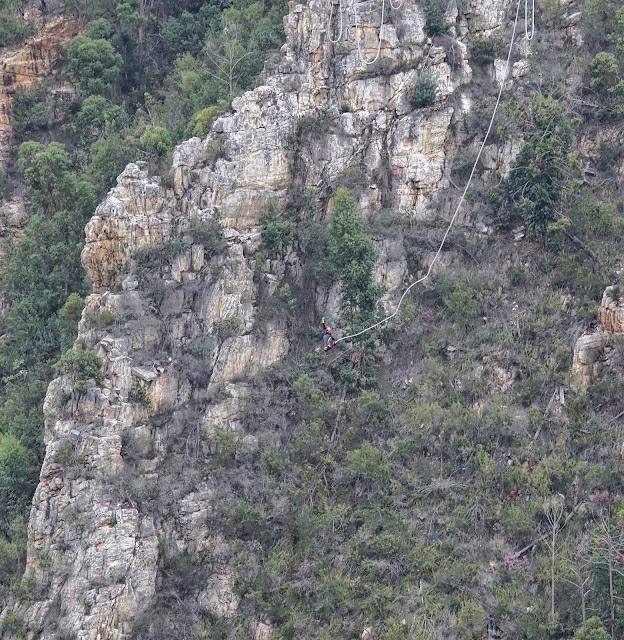 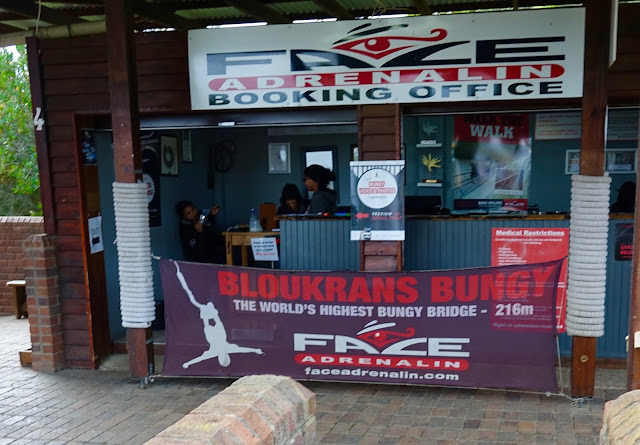 A Hyrax patiently watched and waited for..... not sure for what as all they did was stare at people. 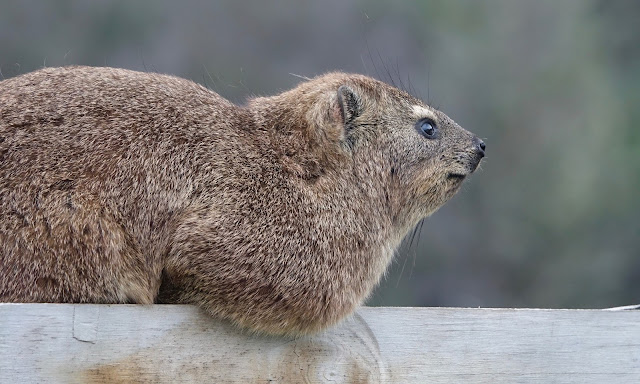 I'm watching you... watching...
maybe... they are using hypnosis on the tourists to give them food?
It must work. Look how fat he is. 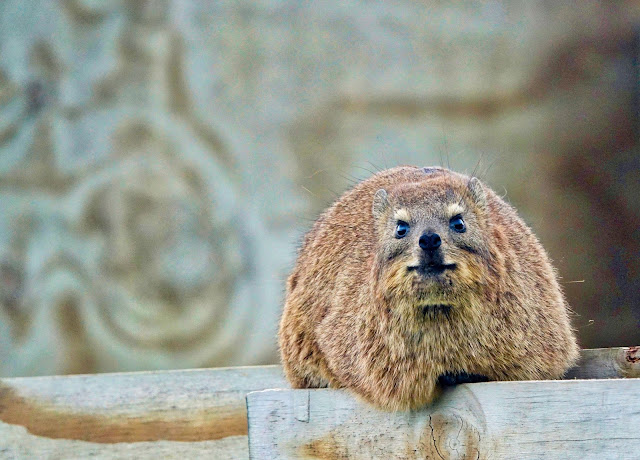 Instead of hiking a kilometer to see a swinging bridge over a river, I spent that time working on capturing art images of waves crashing over the rocks.

Here are three of the better ones. 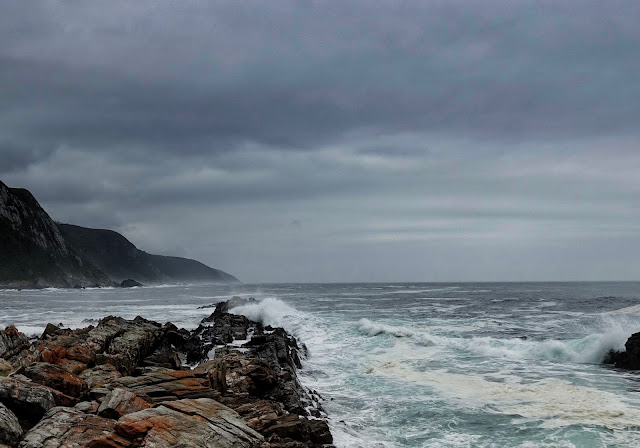 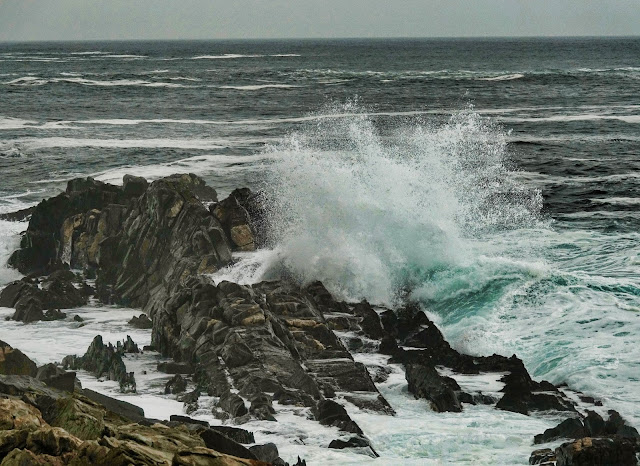 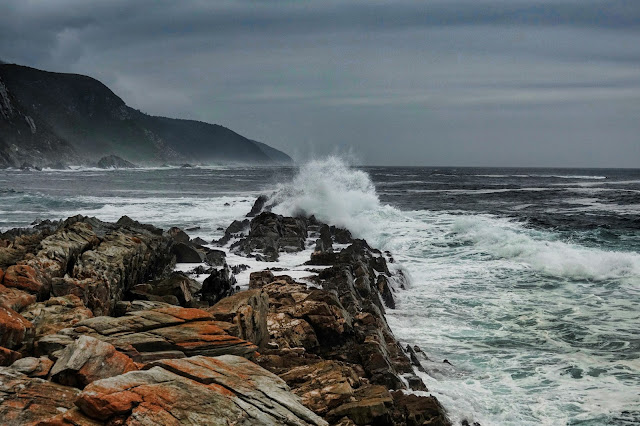 Tomorrow we walk with the elephants. Till then....