Pretoria is in the northern part of Gauteng, South Africa. It is one of the country's three capital cities, serving as the seat of the executive branch of government (Cape Town is the legislative capital and Bloemfontein the judicial capital).
Pretoria is named after the Voortrekker leader Andries Pretorius, and within South Africa is popularly known as the "Jacaranda City" due to the thousands of jacaranda trees planted in its streets, parks and gardens.
Voortrekker was a mass migration in the middle 1800’s of Dutch (Afrikaans) settlers from western and southern South Africa fleeing the oppressive British rule and heavy taxes. Traveling by ox carts, the slow journey into the interior of Africa endured for years with many lives lost to disease, battles with the natives and the slow progression. Various settlements were established along the way before reaching the Pretoria area where abundant water and fertile lands were ideal to establish a settlement.

Many years later gold and Diamonds were discovered in the area.
The Voortrekker Monument was built in 1938 as a tribute to the pioneers who migrated to the area. 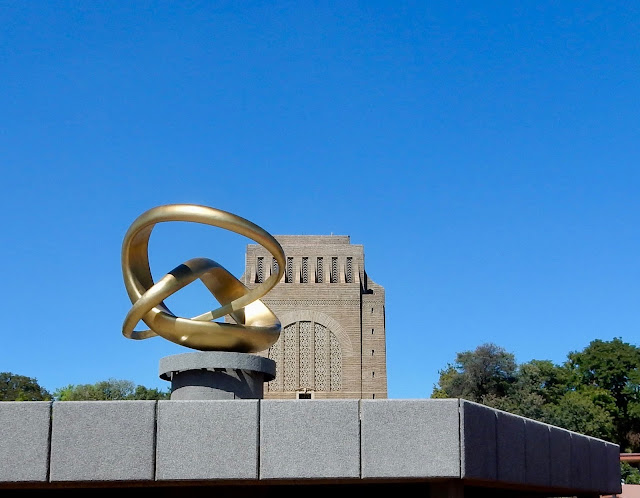 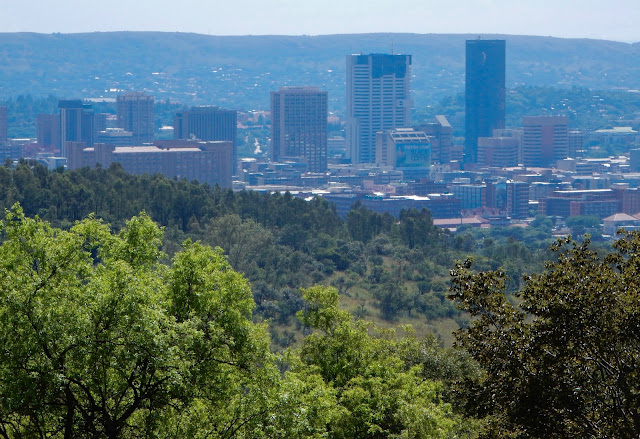 To honor the sacrifices of the trekkers 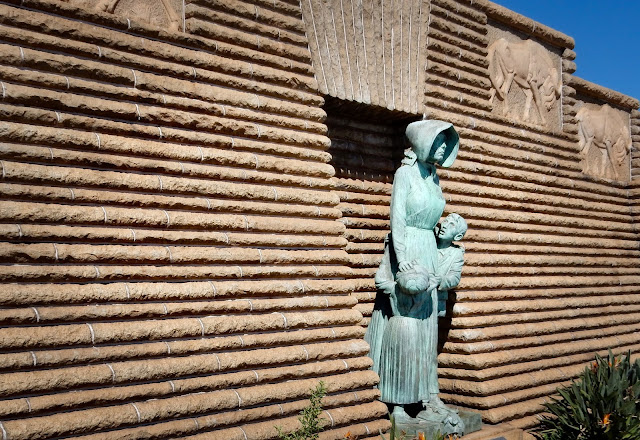 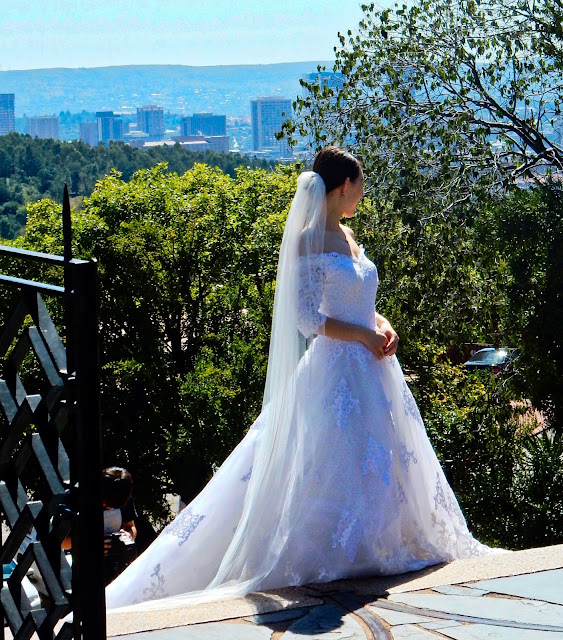 Next we rode to the Union Buildings. Not named for labor unions but for the negociated union of the Dutch and English communities to live in peace.

In front of the Union Buildings a six meter tall statue of Nelson Mandela. 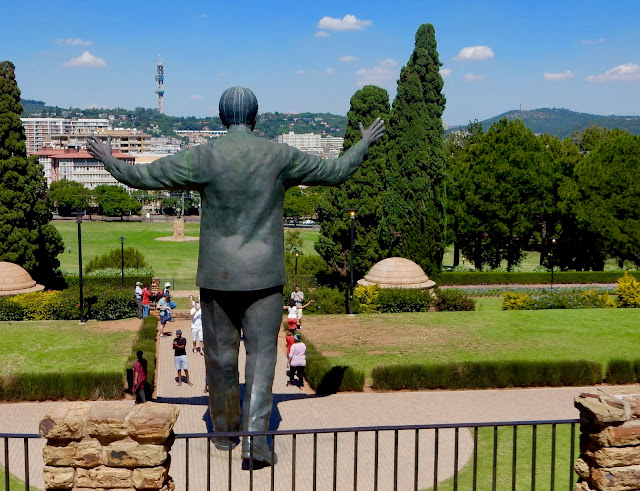 From the Union Buildings we leave Pretoria, traveling with SAMA Tours of South Africa. SAMA offer guided tours, self-guided tours and motorcycle rental, all based their fleet of BMW Motorcycles. 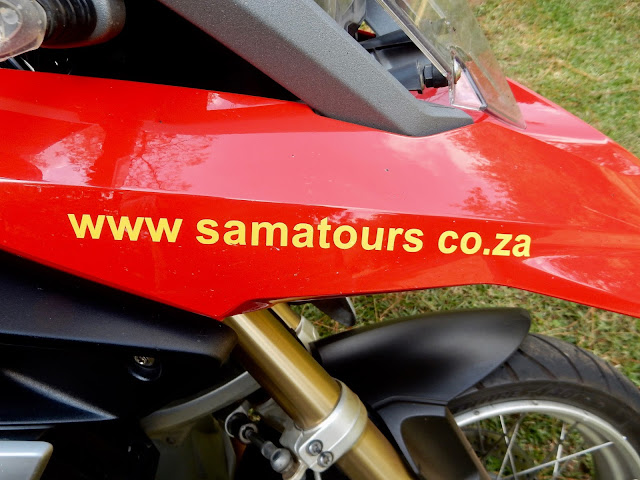 Not traveling far the first day, we arrive at  Kwalata Lodge in the Dinolong Game Preserve. 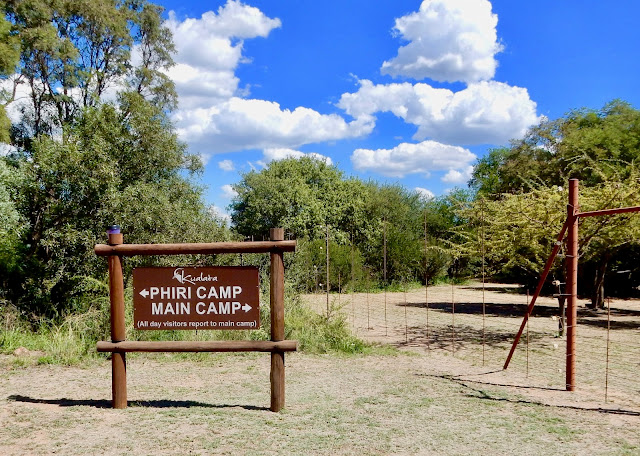 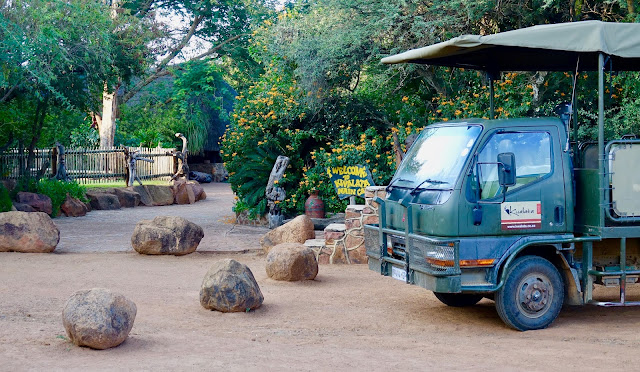 My abode for the night. cabin #2, stone walls and thatch roof. My steed for this trip ia a 2016 BMW R1200GS, the water-cooled model. It a great bike for the long distances we will travel in the next 17 days. 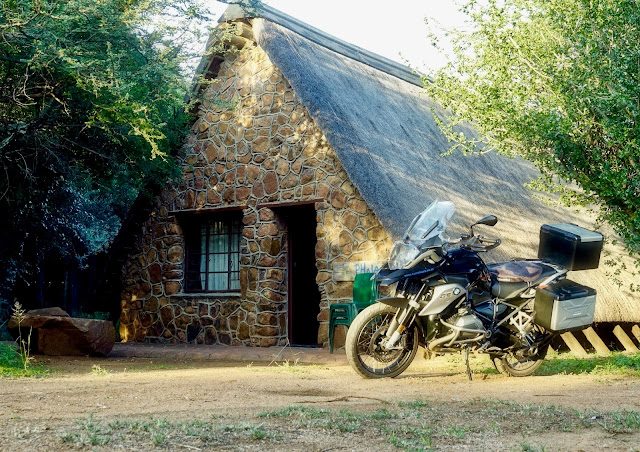 I laid sunglasses and the room key on the inside sill of the big front window while unpacking. Noticing movement out of the corner of my eye, turned to see this banana bird trying to get them.  Called banana birds because of their beak. 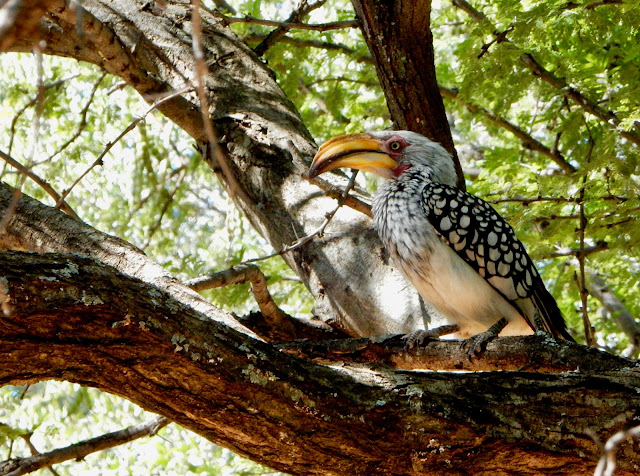 Not sure why this bird was yelling at us. 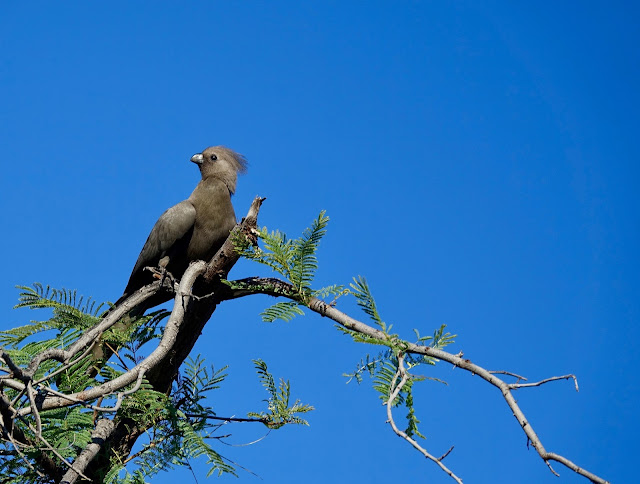 The first animals spotted were the Wildebeasts munching grass in the shade. 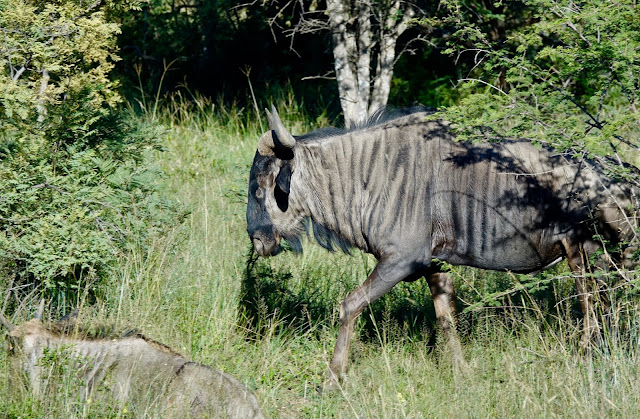 Then spotted a bachelor herd of Impalas. 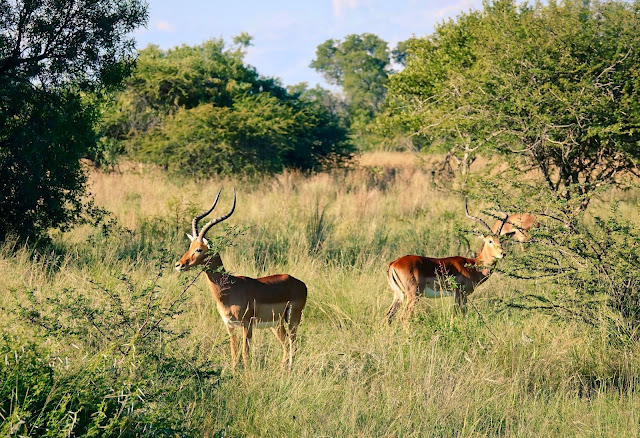 A lone Ostrich wander by as we were looking at the Impalas. 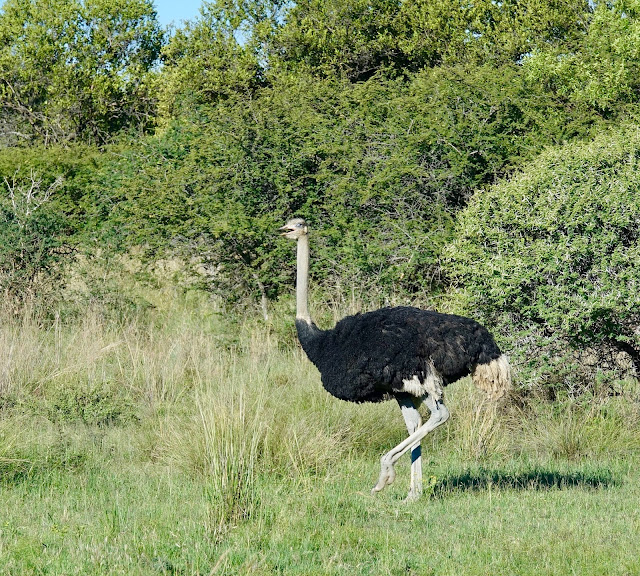 Nearly missed seeing the Kudu hiding in the shade. 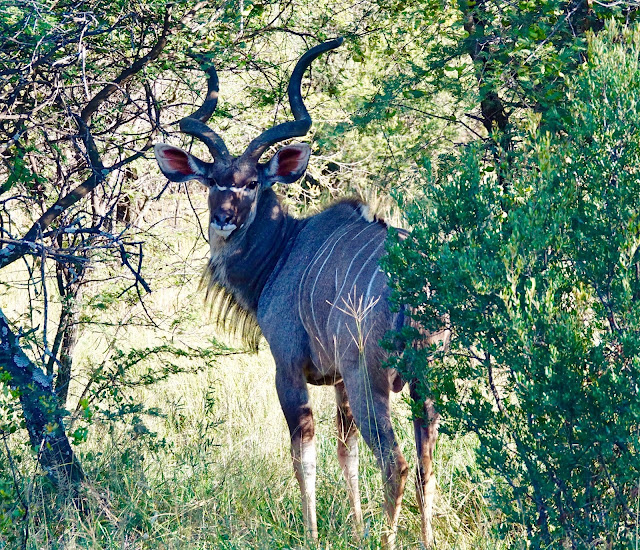 An unusual sight was to see a Jackal in full view. Normally they are very secretive animal. Then we noticed he was not feeling right as he tried to vomit something. 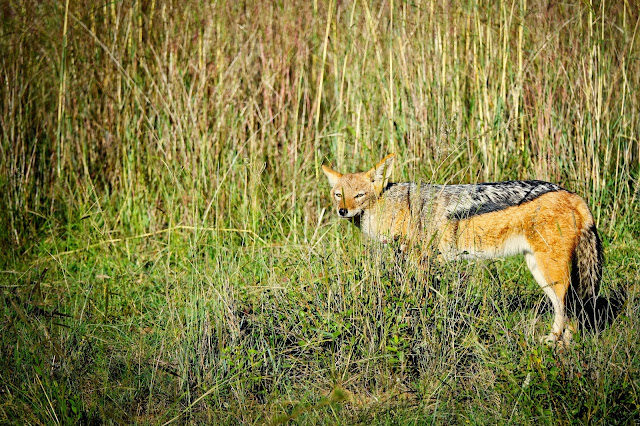 Next were the Zebras, a zeal  (herd) of them. The lead stallion placed himself between the zeal and us in order to defend them 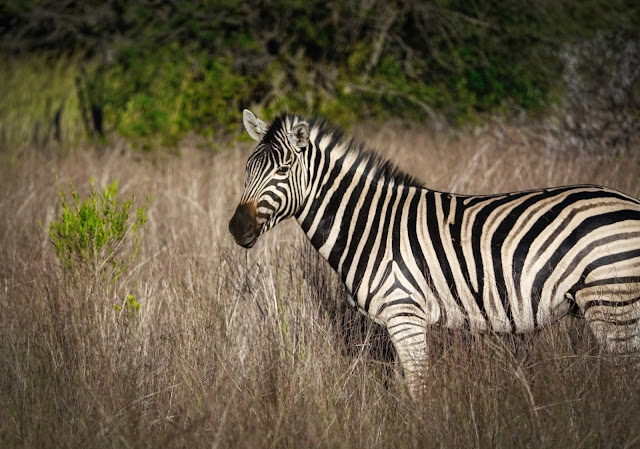 A juvenile Giraffe stepped out of the brush near the zebra zeal. 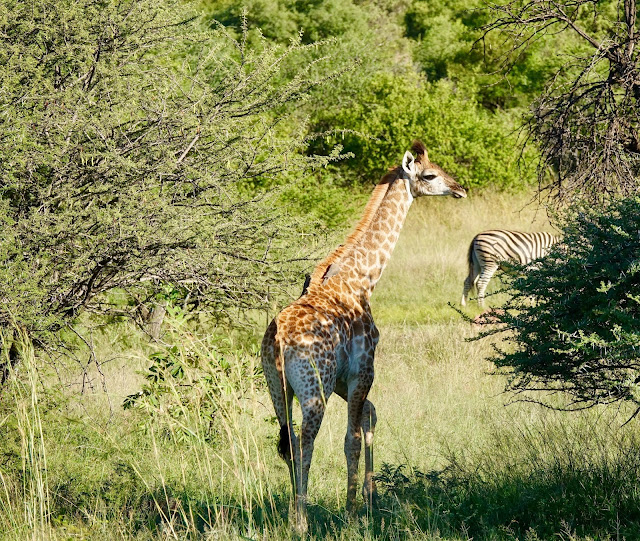 Looking and looking we finally spotted the mother Giraffe. Peering under the trees and brush for a giraffe is futile, their legs look like small trees. 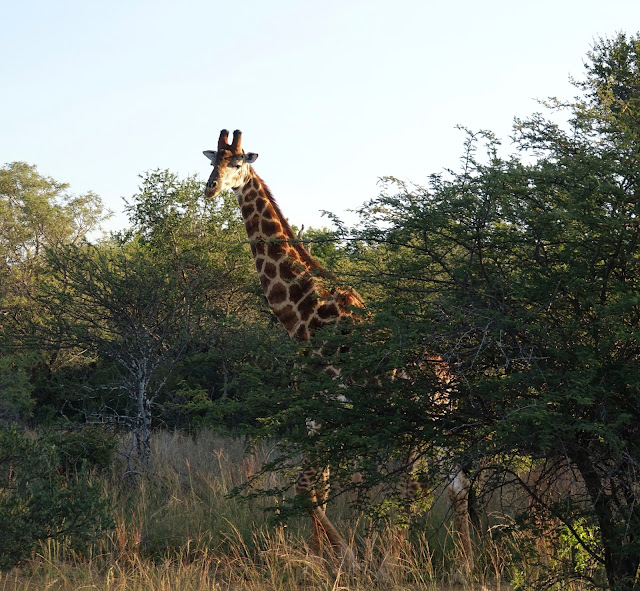 We could not locate any of the big five animals, so our driver got on the phone to see if anyone else had spotted the Elephants.  With their approximate location in hand, we sped to that area of the preserve. With a fading light and long dark shadows, was able to capture a fleeting shot of a bull as he moved among the brush. Their hide is a matte color that is difficult to see in the shadows. 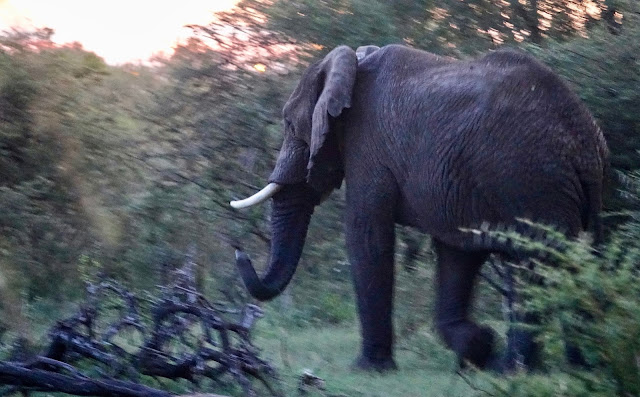 Returning to the base camp, I turned in for the night thinking, I sure hope no live creatures drop from the thatch during the night.... zzzzzzzzzzz. 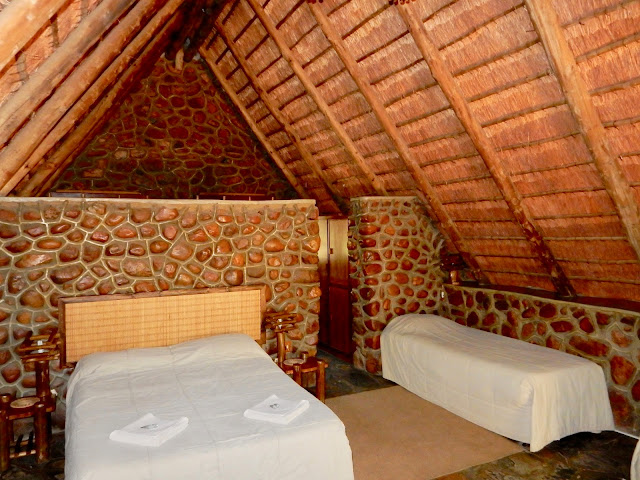 Day one was a great success, saw beautiful wild animals in their natural habitat, learned more of the early history of South Africa and am getting to know my traveling companions.