MOUNTAINS  in  SOUTH AFRICA ? ? ? ?
Those two words don't seem to belong in the same sentence.
Like many, have never read about mountains in SA.

We spent the day riding to reach the 'TWISTIES', as Julian likes to call them. Mountainous roads that  twist, rise, dip and rise with a twist through the pine forests, threading its way in northeast SA.

Leaving the old fashion key in the door at the Kwalata Game Preserve, we ride northeast
into the wild Limpopo Province. 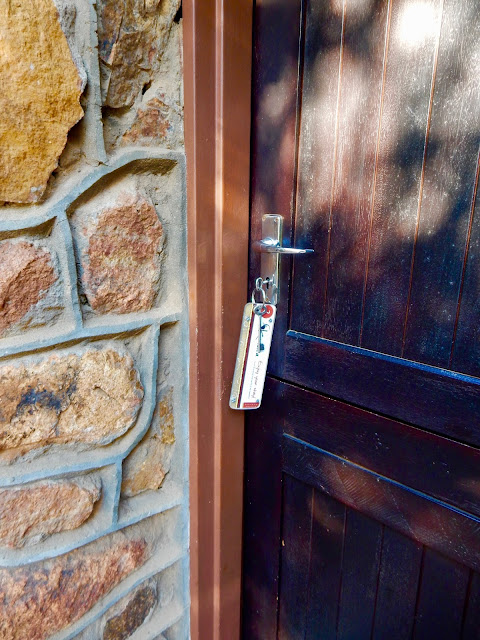 If you are wondering who my traveling companions are. They are Georg and Eva Woenrnle, originally from Germany but now living on Victoria Island in Canada. At least for the last 35+ years they have. Their children and grandchildren all live near them in Canada. They are riding two up on a BMW R1200GS.
They are avid bicyclists, hikers, skiers, motorcyclists and semi-retired from their own business. Both are very pleasant company and great conversationalists. Georg has a GS motorcycle at home and is a skilled rider.

Julian Clarke is our SAMA Tours guide. Julian is friendly and courteous with all we meet. Seems to knows everybody in every village or stop by name. Is a great conversationist and extremely knowledgeable about South Africa; the history, the fauna, the politics, the multitude of tribes and speak a half dozen or more different languages.  Besides all of that, He is a very skilled motorcyclist.

It is said that some motorcyclists ride for the road,
others ride for where the road takes them.
I fall into the latter group, Julian in the first. 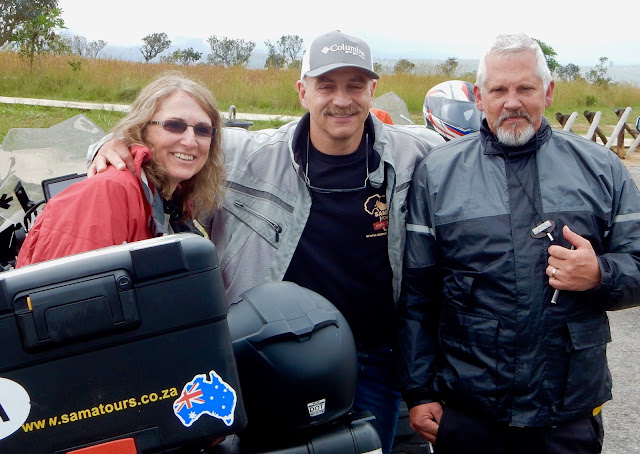 The heavily traveled, yet smooth and well paved roads of the flat lands give way to the twisting mountain pavement, well pocked with holes. Darrell, the owner of SAMA Tours, warned me that if I bend a front wheel rim, I would have to pay to replace it. He followed up by saying, "BMW Wheels are not cheap in South Africa. SO WATCH OUT FOR POTHOLES!

Advice well heeded as the need to watch out for other traffic transitioned into watching out for potholes. Which was okay, as we rode higher the number of other vehicles on the road declined dramatically.

Julian again warned us that potholes can jump up at you anywhere, but be especially careful of those potholes where you can only see the giraffes' head sticking out....

After riding 310 km, we reach our lodging for the night, the Magoebaskloof Hotel. Perched high on a ridge overlooking the Magoebaskloop mountains and valley. A very lush fertile region with adequate rainfall for the many fruit farms in the valley. 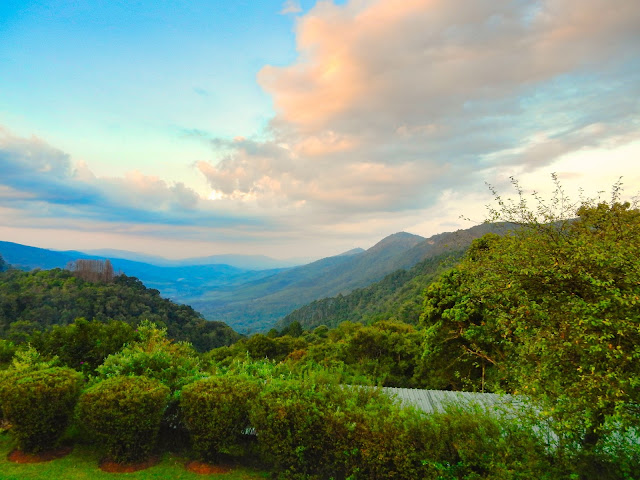 Typical of being in the mountains, we fell asleep listening to heavy rainfall and strong winds all night long. By morning, the rains were gone but the moisture remained in the form of fog. 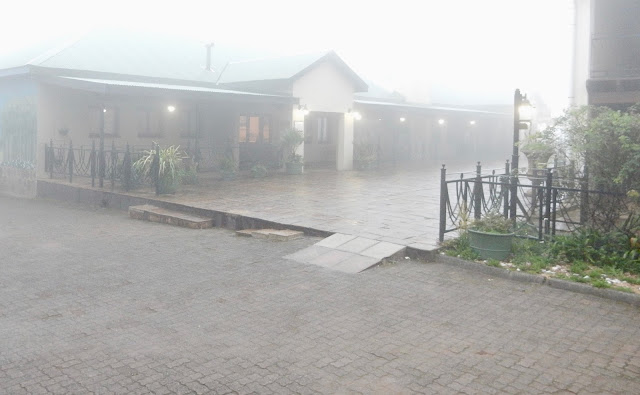 In the courtyard of the hotel is a bust of King Mamphoku. When the British invaded this valley in 1888, they tried to control it and tax the inhabitants. After many disputes with the local tribes, soldiers attacked the King and his people in 1894. Fleeing to the mountains, the King avoided arrest for a year, only to be captured and beheaded in 1895. 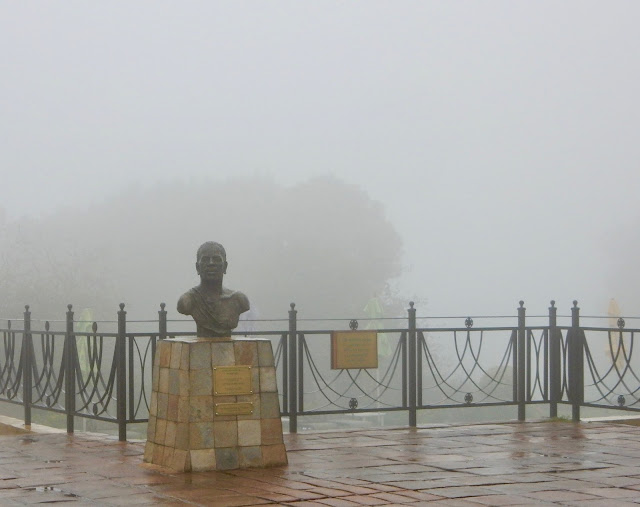 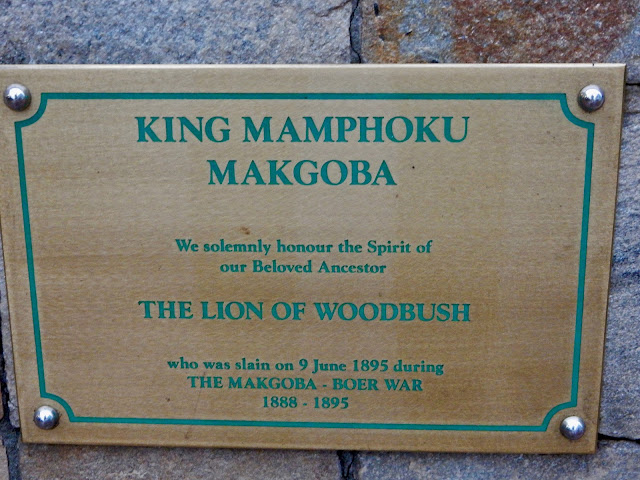 Donning our rain suits, we ride on thru the foggy mountains on roads know in SA as Bikers Paradise.  A road that will takes us by several well know landmarks in the Limpopo Province. 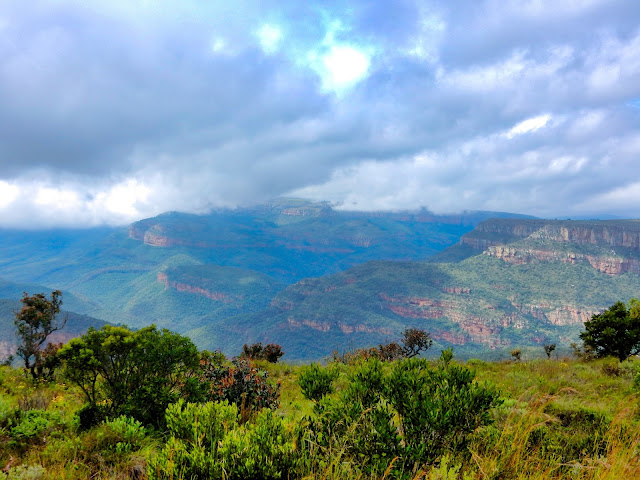 First up is Bourke's Luck Potholes.
Tom Bourke was gold mining this area when he discovered the potholes. The Treur River plunges into the Blyde River headwaters where the falling water caused the rocks and pebbles to swirl round and round drilling holes deep into the soft sandstone. Thus creating potholes that are cylindrical and deep. Tom laid claim to the area thinking it would be rich with gold. Not a single ounce of gold was ever found here, but Tom Bourke's name is famous today...   for his potholes.

From here the water plunges straight down through the rock. 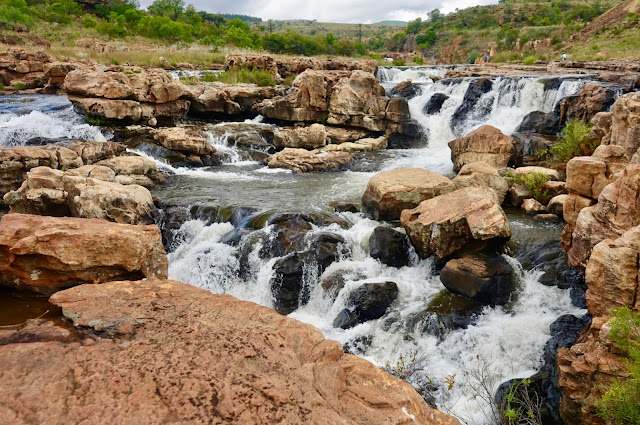 A Vervet monkey watches over the visitor center hoping for handouts. 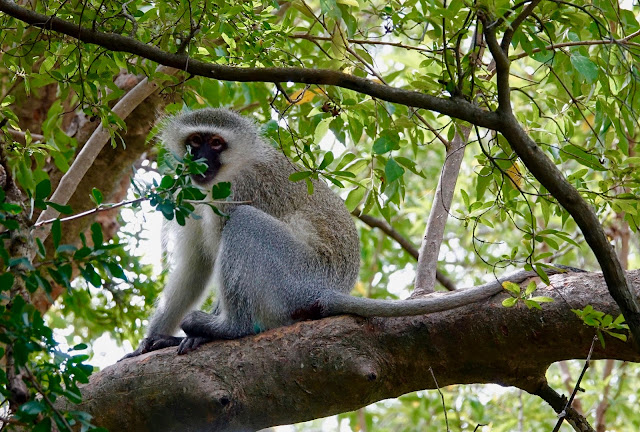 The Treur River in the background flows toward the potholes . 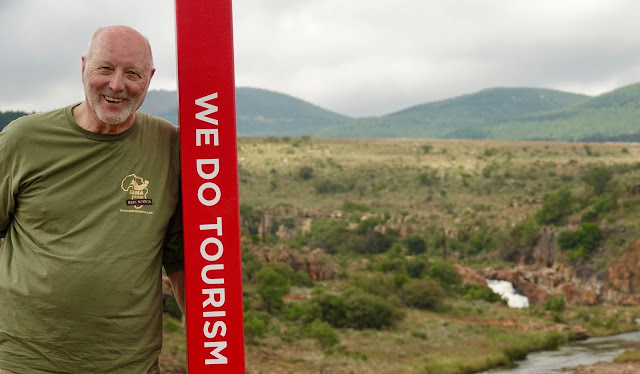 Next stop, the Three Rondavels.
Arriving there as the fog and rain was moving back in.
We could see it covering the Rondavels but we did not get rained on.

Rondavels or Rondille, is the local name for "the bundles".
The shape of the three peaks resembles a file of three women carrying bundles on their heads. 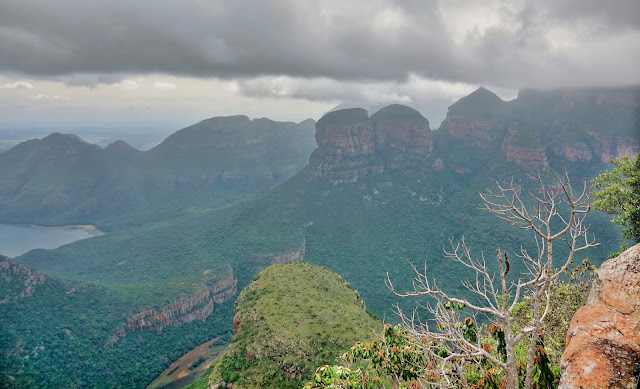 When we arrived at the third and final landmark, God's Window, it was socked in with fog.
Window is closed tight!

From there we dropped down in elevation, arriving at the Hippo Hollow Lodge near Kruger National Park in the city of Hazyview.

Great riding today, but was exhausted. As I walked into my room, was shocked to see what I first thought was a huge spiderweb on the bed. Looking closer I realized the maid had arranged flowers of yellow and blue buds on the bed. 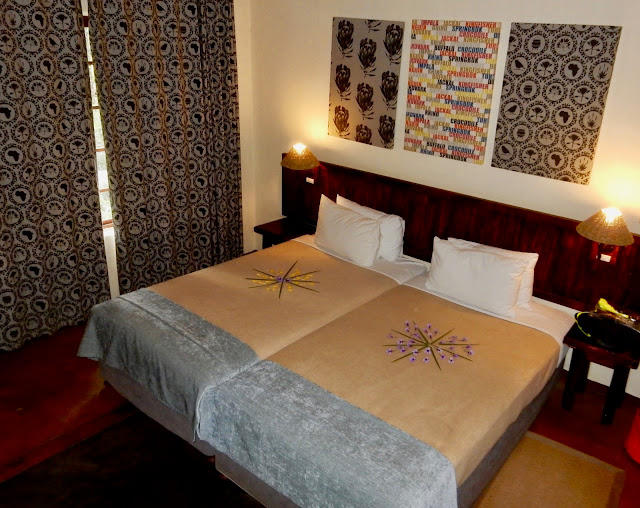 I felt really bad about disturbing her handiwork, but where was I going to sleep if I didn't? 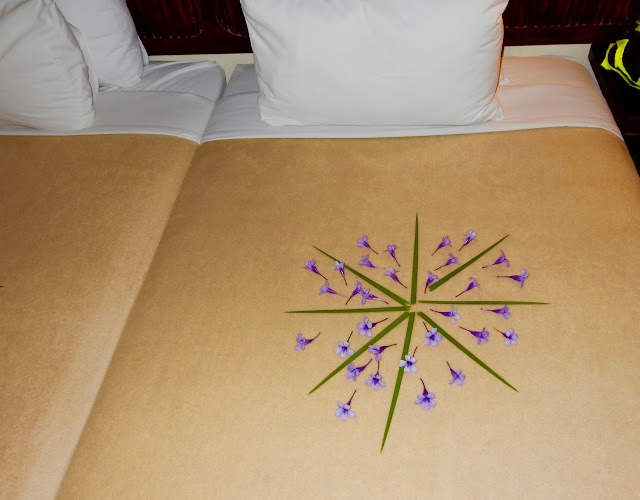 While we were dining on the terrace of the lodge that night, we came to understand how the place got its unusual name. Only a couple dozen or so yards from us, a hippo emerged from the river to munch on the grass. Only had my iPhone at the time, but the image was captured. 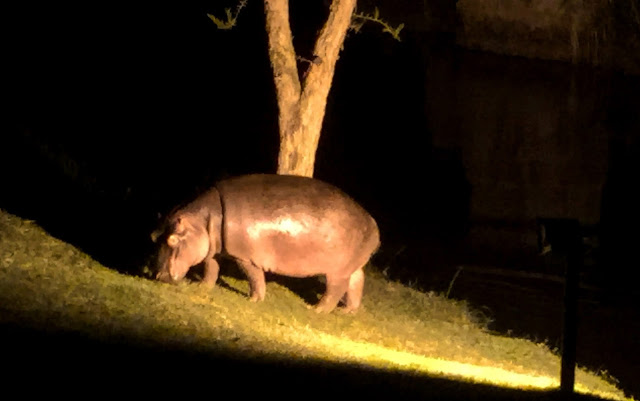 Tomorrow we take a half day game drive into Kruger National Park. Kruger is the second largest national park in the world. Yellowstone in the US being the largest.

Hope to get more photos of wild animals.
My goal is to capture images of the Big Five African Game animals on this trip.

For now, time to get a good nights sleep.