Evening of Day 4: The BOMA


The night before leaving Hippo Hollow Lodge in Hazyview, we attended a BOMA. A native dance ceremony followed by a meal of native foods. The lighting was dim so no photos of the ceremony.

Eva and Georg tasted the Moponi worms and wild spinach. I settled for the wild spinach which has a much better taste than the canned green stuff. 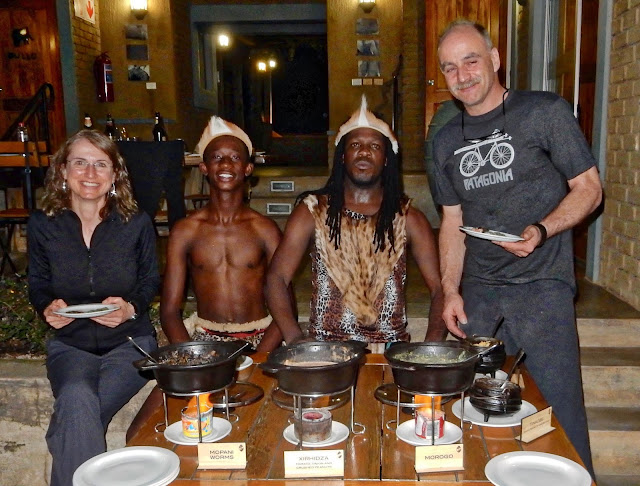 Day 5: On to Kingdom of Swaziland


We donned our rain suits as the weather was rainy and hazy. Our destination for the day is the Mantega Lodge in the Kingdom of Swaziland. I do not mind riding in the rain, but fog is another story.  The fog was so thick I could not see the rider directly in front of me,  nor could I see which way the mountain road would curve. The only option was to slow down, ride slower until we were out of the the clouds.

Midmorning there was a short break in the clouds. Grabbed this shot, then the rains moved back in. 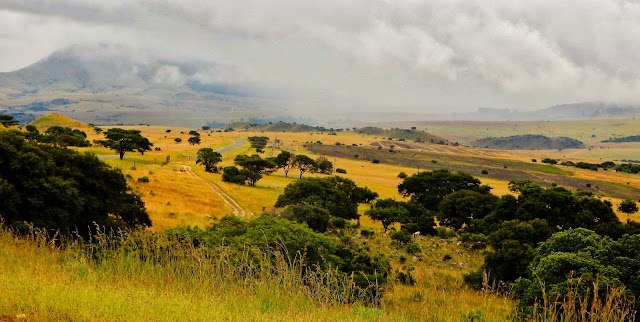 The border crossing from South Africa to Swaziland went quick and easy. Our guide selected a crossing with few very large trucks or busses. The only problem was with immigration. The lady officer kept telling me I was too tall for their camera, it could not see my face. Kneel down... lower... lower........., the people waiting behind me thought it was hilarious, my crouching for the photo.
The Swazi countryside is lush and green. The people are friendly, wave and smile at us.

The Swaziland King has his Queen, his first wife who gave him a child. Though he has a British education and is progressive in attracting industry to his country, he is not about to give up the local customs.

Every year there is a ceremony with thousands of topless virgins known as "Umhlanga" or the Reed Dance, from which the King selects a new wife. The chosen one is only a fiancé until she becomes pregnant, then she also becomes a queen. Each queen has their own home and household.

At last count, the King has 14 wives/queens They thought he would stop at twelve, but I guess a month is too long to spend with one women.

We were happy to settle for a night at the lush Matenga Lodge. The noises we heard on the roofs was not rain, but the vervet monkeys looking for food. 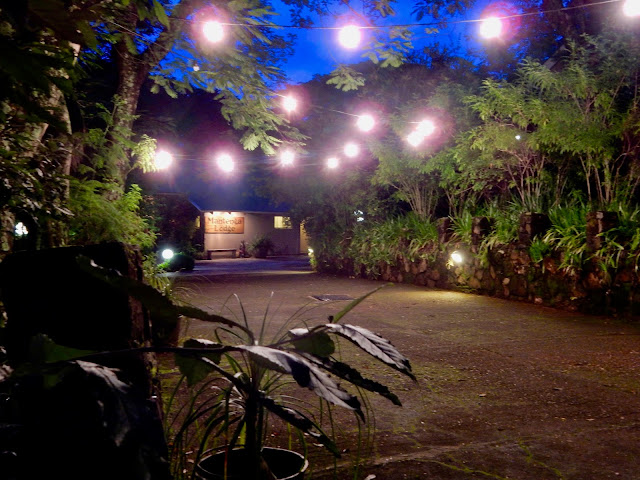 As I walked to our bikes the next morning, found Joseph washing them without being asked. He said they looked dirty from the rains so he decided to clean them.
Of course we tipped him well. 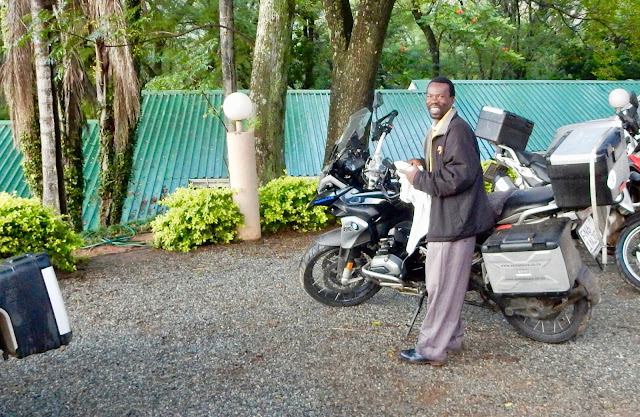 From our breakfast table in the lodge, we would see Ghost Mountain where many Kings are buried. 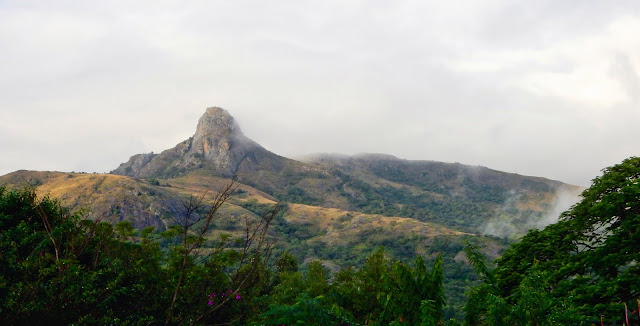 No matter where one looks here, there are flowers with lush green vegetation. 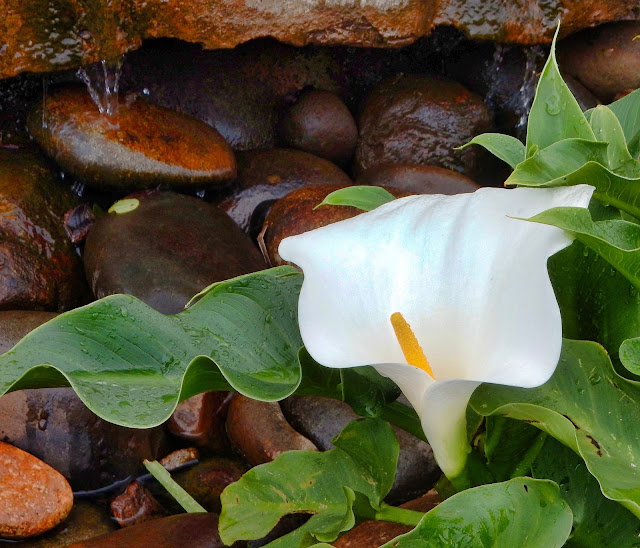 By 8 AM, we are on our BMW's riding. Our lunch stop is at the Crocodile Glass factory.
From the overhead catwalk we could watch the workers make goblets and wine glasses. The large furnace is the middle is where the raw glass is melted 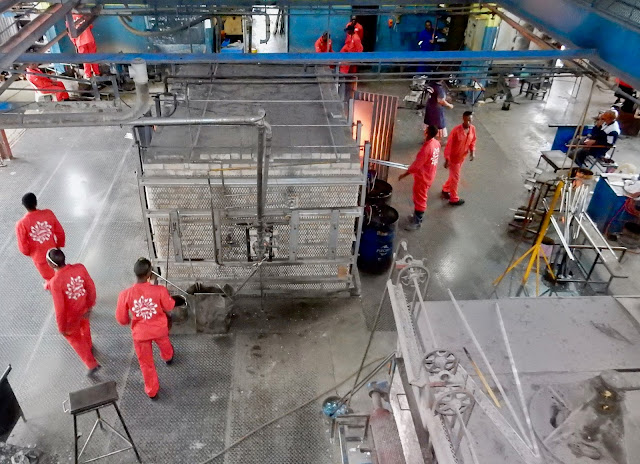 After each wine glass is trimmed to the correct height, the edge is still rough and sharp. They are then placed on a circular conveyer where each goblet is slowly warmed up then heated under an intense flame to melt the edge until it is smooth. Using tongs, the worker removes the still hot finished glass and places it on a tray to cool. 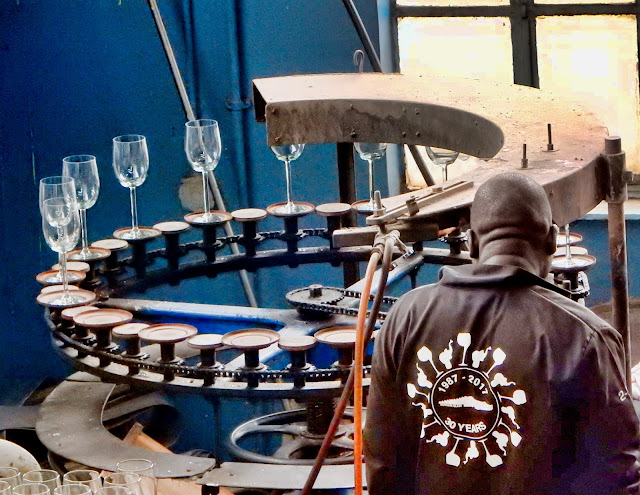 What is impressive is that all of the raw glass used is recycled junk glass that the factory buys from locals who gather it to sell to the factory. Not only are they cleaning the countryside of discarded broken glass, making it safer for children and animals, but it also provides a small income to the gatherers.

In addition to the production of standard glassware, there is also a very talented group of glassblowers here who create a wide variety of figures and animals out of glass. 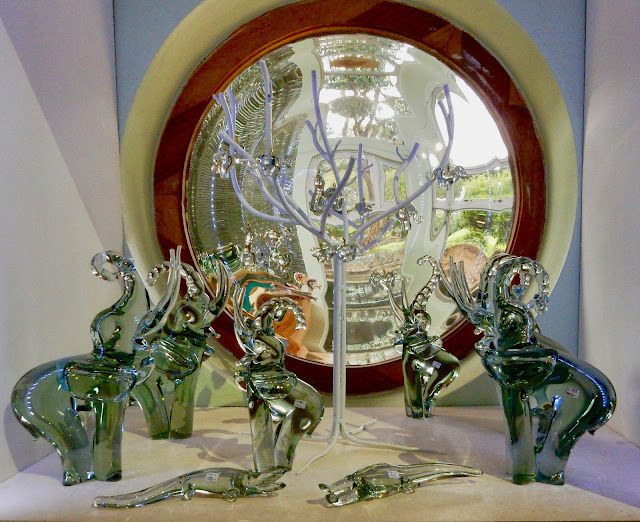 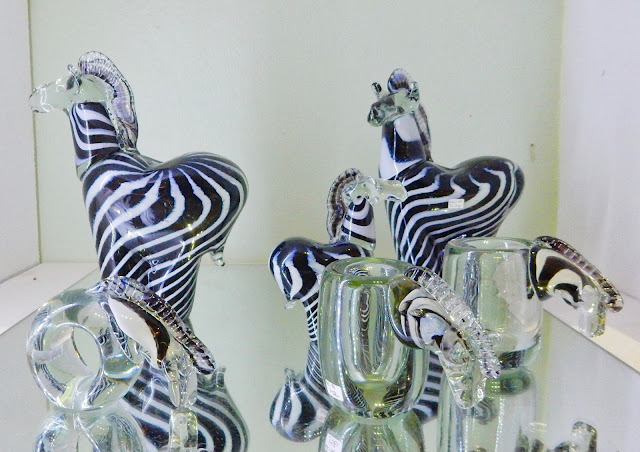 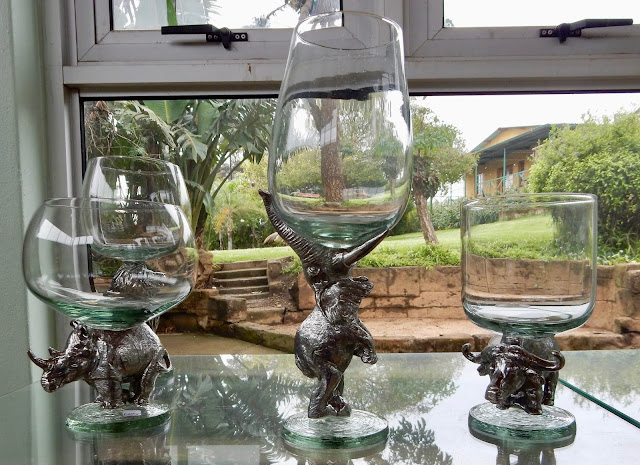 After the glass factory, we visited a candle factory where the artisans create a wide variety of figures and animals in wax. Nearby was a small artisan market catering to the tour busses who come to visit the candle factory. 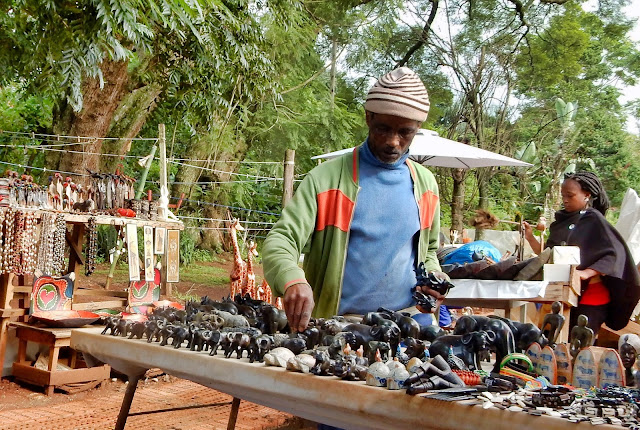 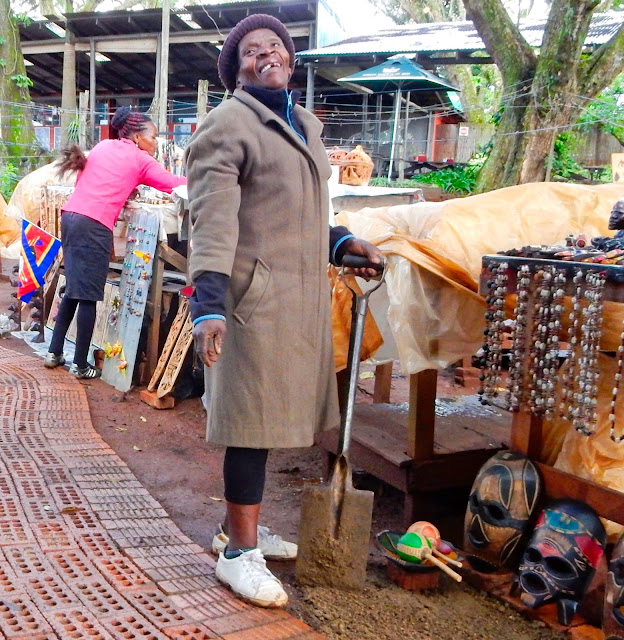 Behind the display area, I found several workers carving figures and animals out of soft wood using a hatchet, not carving knives. 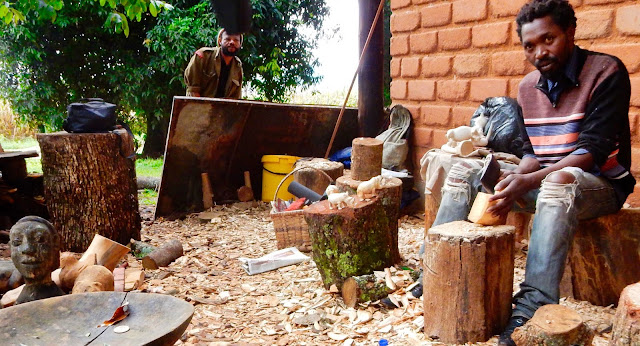 Crossing back into South African we ride through the Zulu Kingdom in route to St Lucia on the Indian Ocean coast. St Lucia is a world natural heritage site with beautiful secured beaches bordering a huge estuary: home to hippos, crocodiles, endangered turtles and other wildlife.


With a free day in St Lucia, the morning is spent attending to laundry, catch up on the blog and visit the few tourist shops on the main street. St Lucia is a small town, a vacation resort area.

The road signs leading into St Lucia forewarned us as to what we would see here. 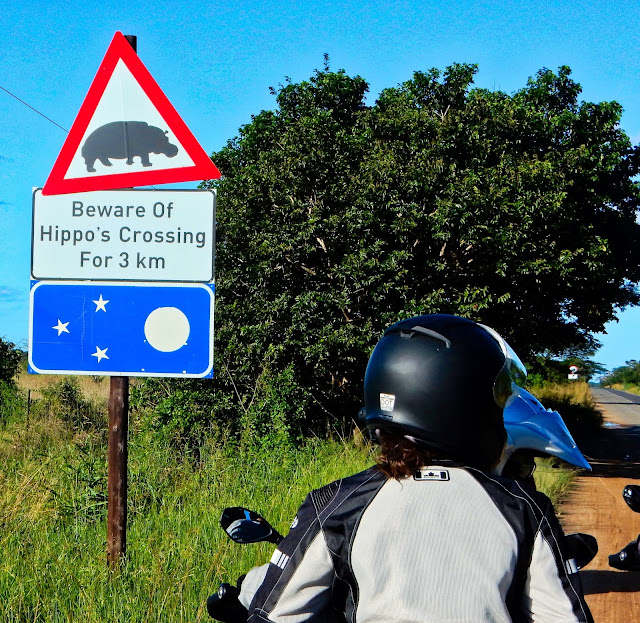 Again at our lodging,  Elephant Lake Hotel. We were once again warned to not leave the windows open as the vervet monkeys would grab anything they could, or worse enter the room looking for food. 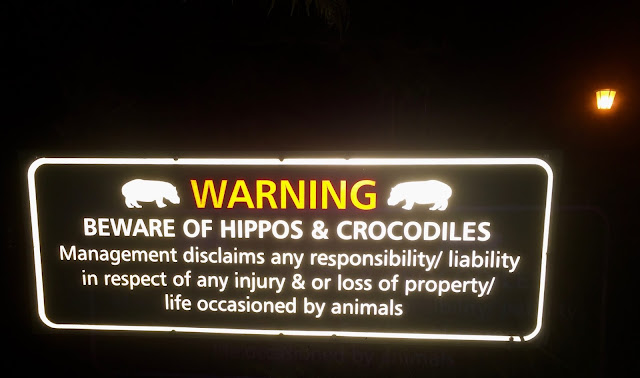 In the afternoon we went on a boat ride among the mangroves looking for hippos and crocodiles in the Wetlands Natural Park. 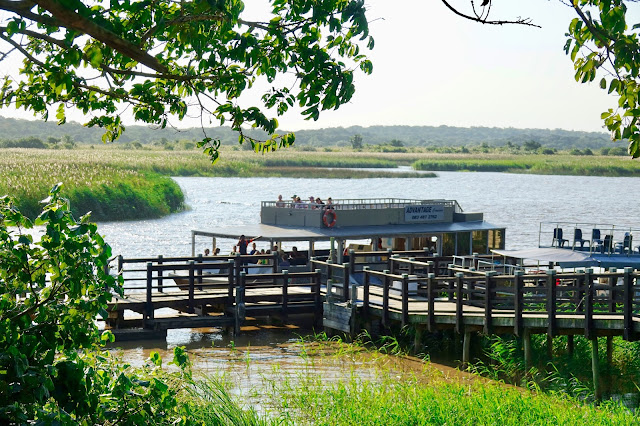 First we spotted was a pair of African Fish Eagles. These birds mate for life.
When one dies, the other never mates again.  Obviously are not Swazi king birds. 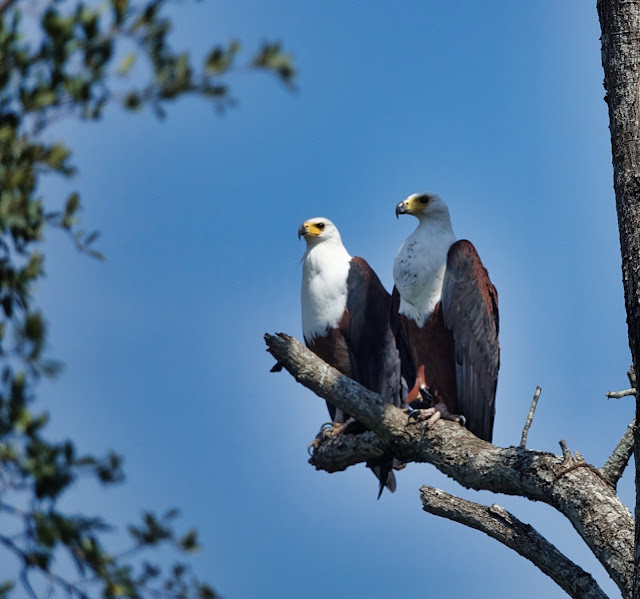 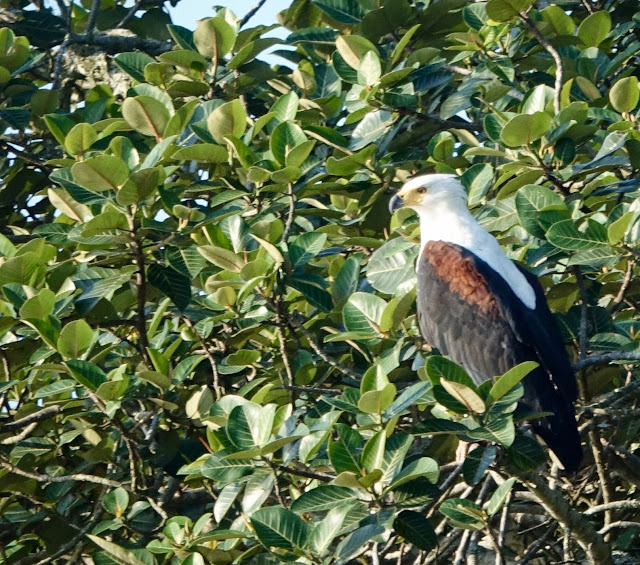 A small hippo pod was spotted as they rested in the river. Hippos spend the day in the water, out of the harsh sun as they burn easily. While hippos can swim, they prefer shallow waters near shore or under the overhanging branches which provide shade.

At night they leave the water seeking food. 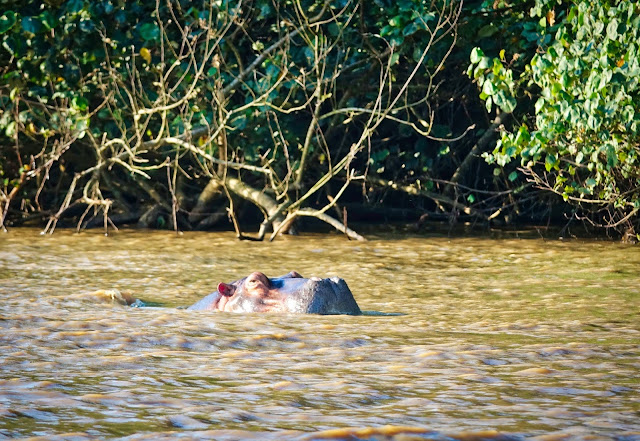 A larger pod is spotted. 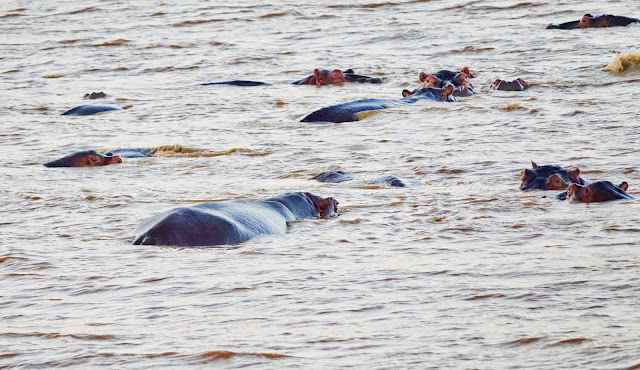 Hippos are vegetarians, grass-eaters. Oh well, so much for the slimming affects of a vegetarian diet.
The reeds and grasses provide a quick snack for the hungry hippo. 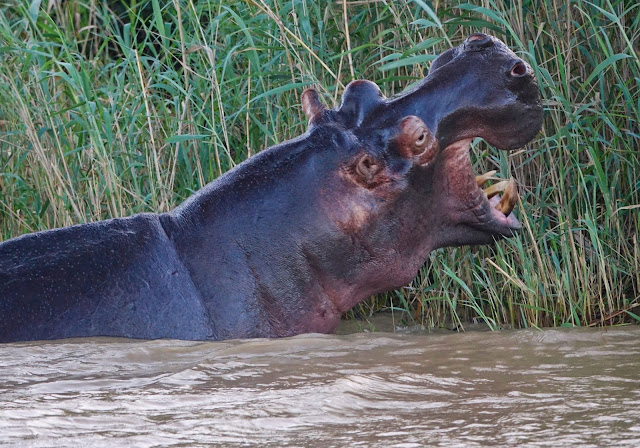 Our spectacular gift of the day was when we spotted a hippo who had just given birth.  A hippo baby (called a “calf”) can be born on land or in the water.  It is protected by the mother, not only from crocodiles and lions but from hippo bulls that may try to attack them in the water.

Mama hippo was nuzzling her newborn under the shade of the mangrove trees when we spotted her. 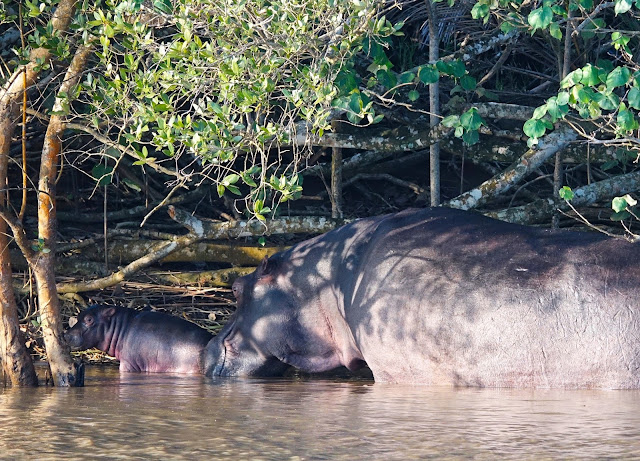 When we got too close, she gave us the hippo warning sign, a large mouth opening yawn. Look at those canine teeth, not an animal to mess with. They say hippos kill more people than any other animal in Africa. Particularly if you get too close to their young or between them and the safety of water. 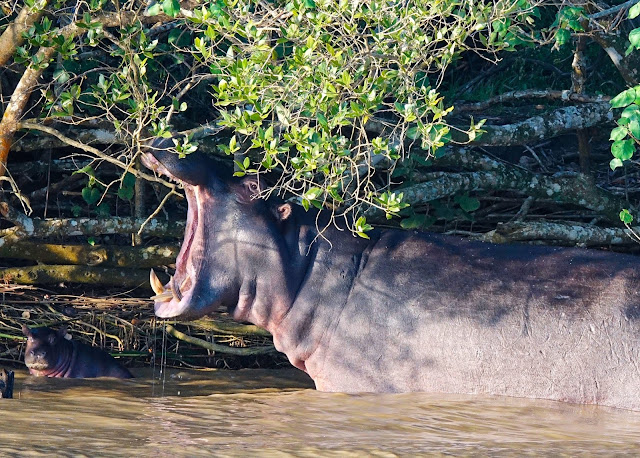 Then we got Mama's glare, "I told to to get! Now get!"
So we did.  Not wanting to experience a hippo charge. 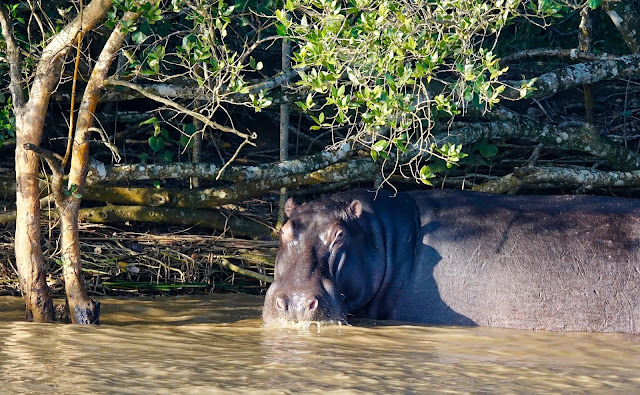 They say the wetlands is home to several thousand crocodiles, but we only spotted one solo croc sleeping on the riverbank. The ground behind the croc shows this to be an active croc resting area, so the other one thousand, nine hundred and ninety-nine crocs are out looking for a meal? 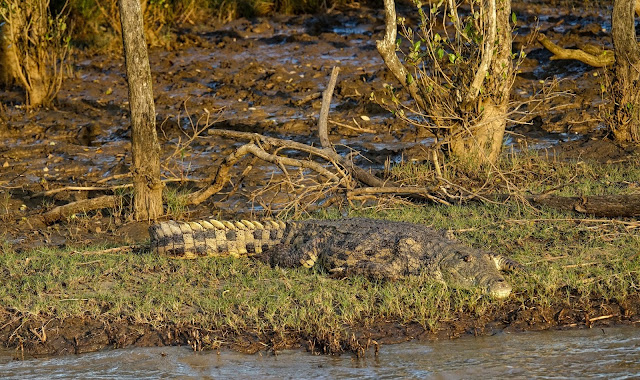 As the African sun drops in the sky, we turn around to return to the dock.
No one is allowed out in the estuary at night. 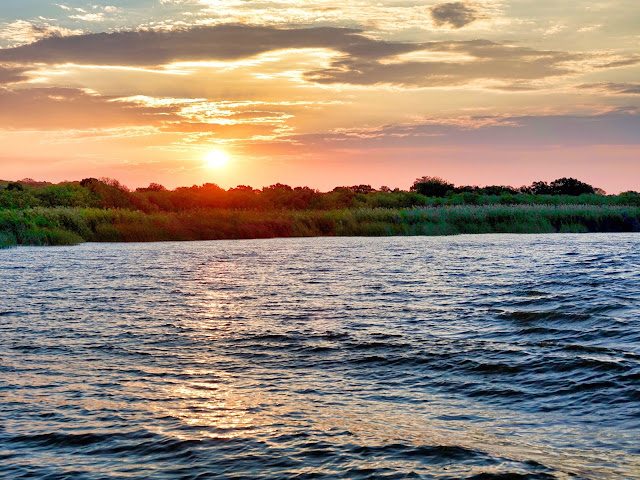 With the fading light, we wrap up another fantastic day in South Africa. It is hard to comprehend that we have only been here a week, have seen so much, learned so much and the tour is not even half over.  Unbelievable ! I will have stories for the grandchildren for years to come. 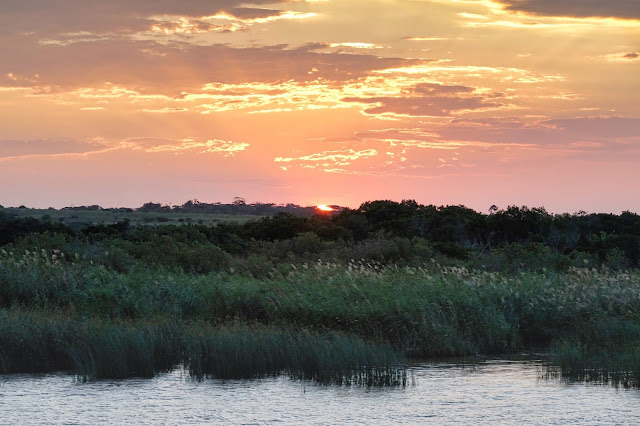 Tonight we rest, tomorrow we ride.