DAY 14
Today we continue our journey south and west to Oudtshoorn, following a twisting winding road known as the Garden Route.  But first a ride up to the peak overlooking the entrance to the harbor at Knysna.

Georg and Eva share a moment with Knysna in the backdrop. They have been married 35 years and have grandchildren. 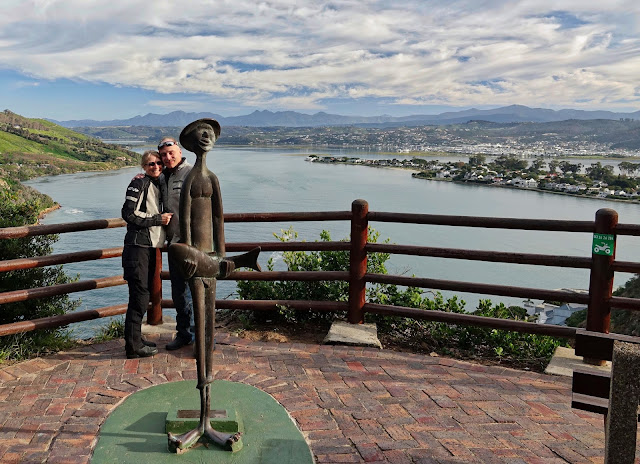 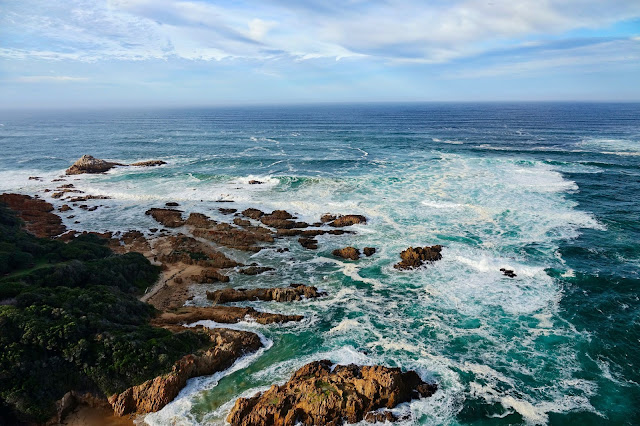 While on the other side of the channel entrance, a lonely house sits high on the cliff with an ocean view. 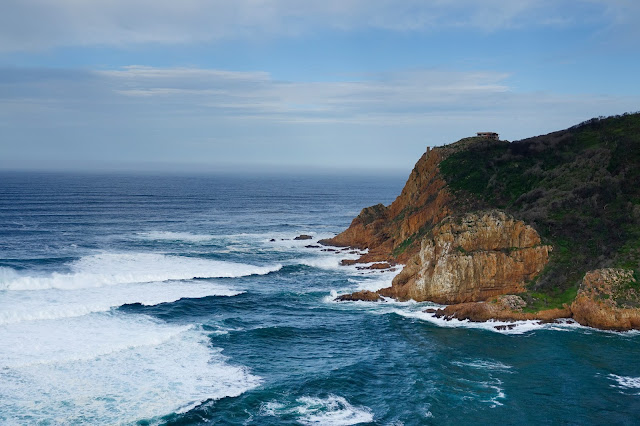 Riding into George shows how developed western South Africa is. A good comparison is western South Africa and the Cape Town area is like New England in the United States. It is where the first European colonies were established along the coast before more people arrived and they started moving inland. These areas are the oldest and the most developed urban areas of the countries. 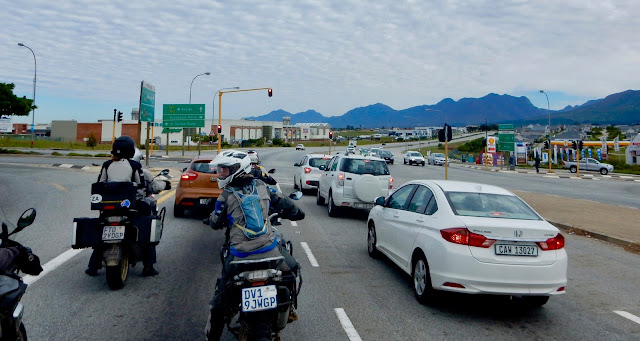 Have seen more BMW 1200GS motorcycles here than any other brand or model. 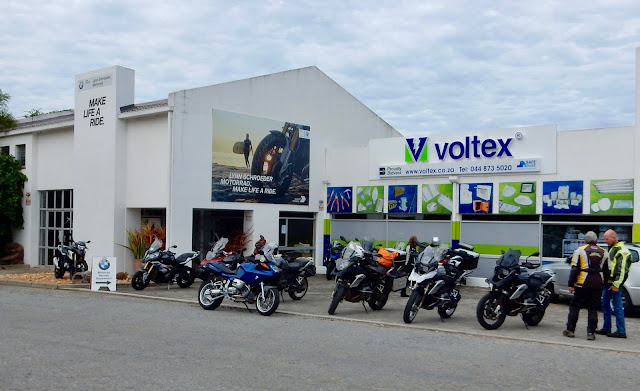 Next a visit to an Ostrich farm for lunch.
A mama ostrich oversees the chicks 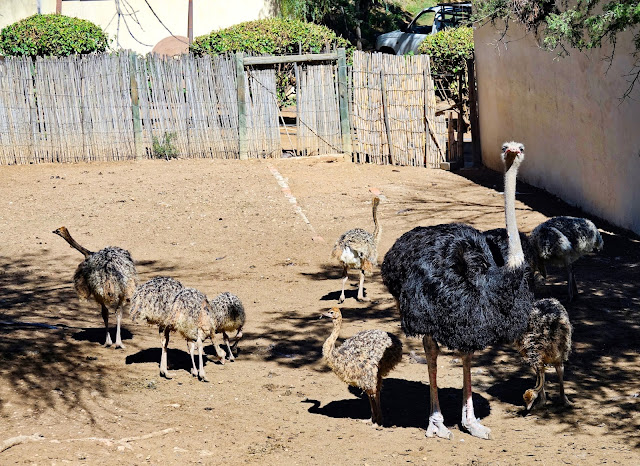 In the hatchery, they look to see if an egg has a embryo or not by placing it over a light. 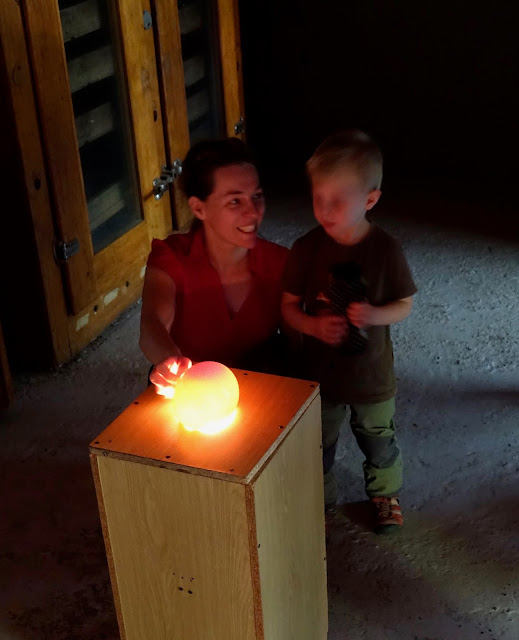 The young chicks are all fuzz. 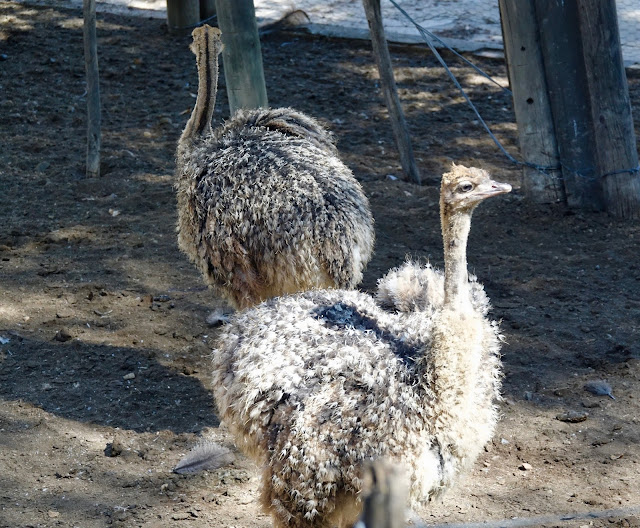 Getting a neck massage from the ostriches. 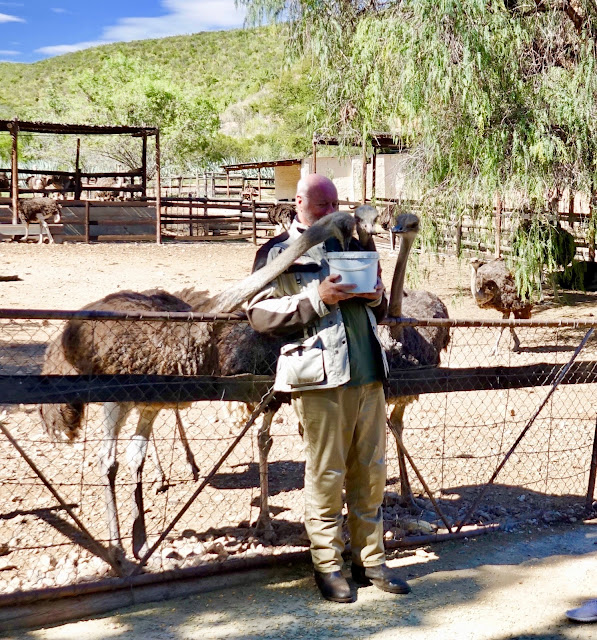 From the ostrich farm we ride a twisting winding road that dead ends
at the mouth of the Cango Caves. Took the hour tour underground. 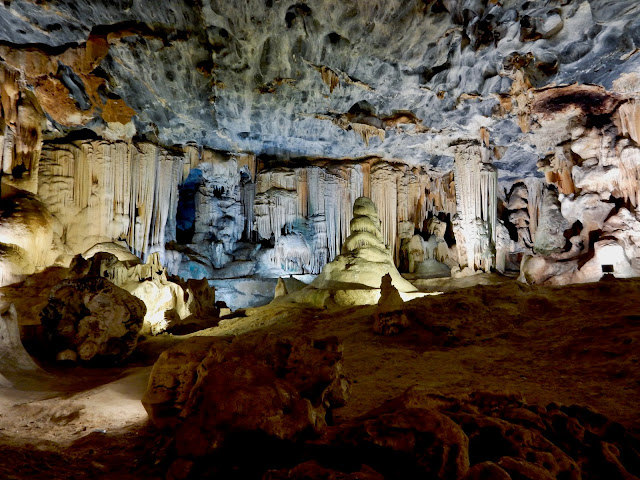 The road into the mountains is lined with farms, some grow hops, used in brewing beer. 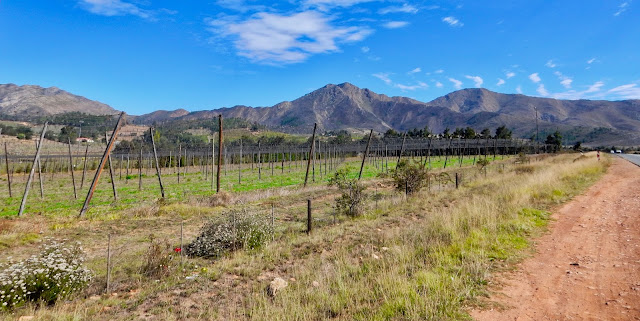 Harvest time is here, the leaves are ready to be brought in for drying.

Waiting to be loaded on wagons and taken to the drying shed to cure the leaves.

We arrive at the Adley House in Oudtshoorn for the night. 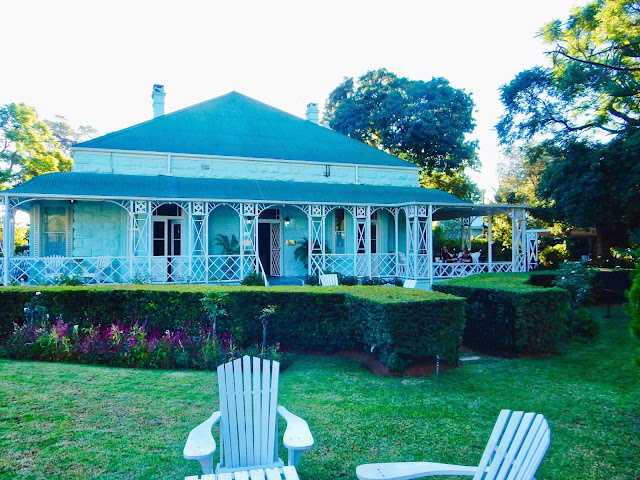 The road today winds through the Swartberg Mountains, across grain fields dry from the harvest, making our way to Cape Agulhas, the Southernmost Tip of Africa. This is where the cold waters of the Atlanta meet the warm waters of the Indian Ocean.

A cool morning ride across the Swartberg Mountains. Two more bikes have joined us, Nicole and Morag. They both are GS Challenge competitors. Can out ride most men on a motorcycle.
Nicole works for SAMA Tours. 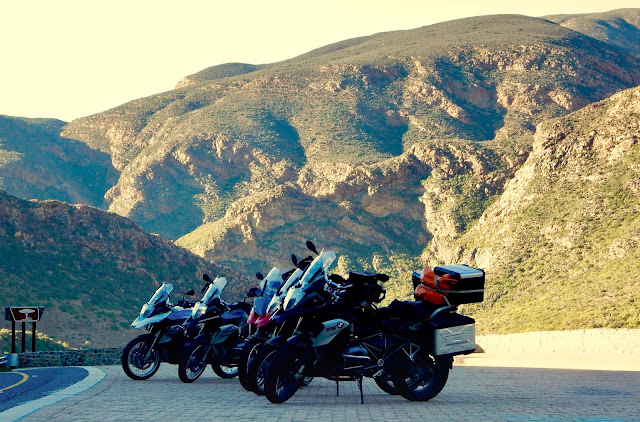 In the middle of nowhere is Ronnies Sex Shop. Actually is was just Ronnies, but one night a few of his drunken buddies decided to play a prank by adding "SEX" to the name.
Business boomed immediately so Ronnie kept the new name. 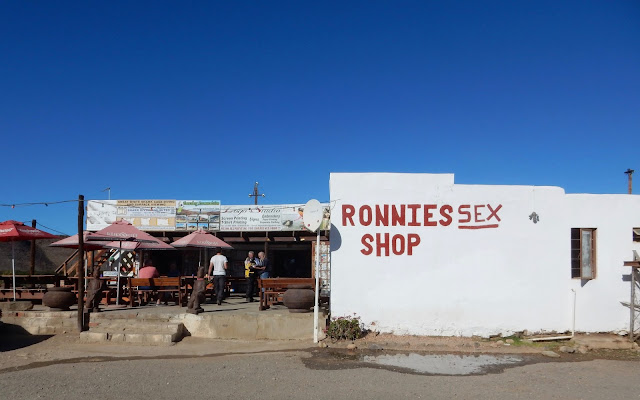 Is surprising how the dry terrain and buildings in this region look so much like Mexico.

Deep gorges cut through the mountains with grain fields in the distance. 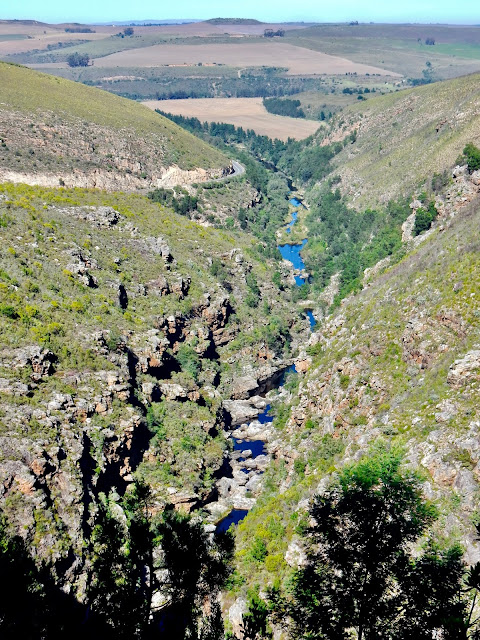 We encountered several road construction sites today, but we were able to cut to the front of the line. 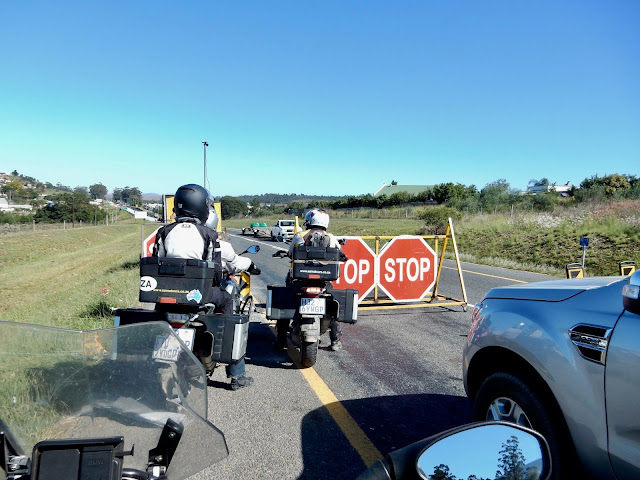 A rare sighting, the national bird of South Africa, the Blue Heron. 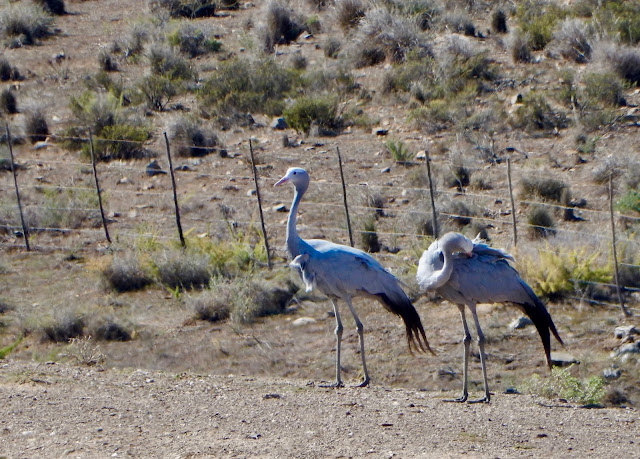 Here we turn for the final few kilometers. 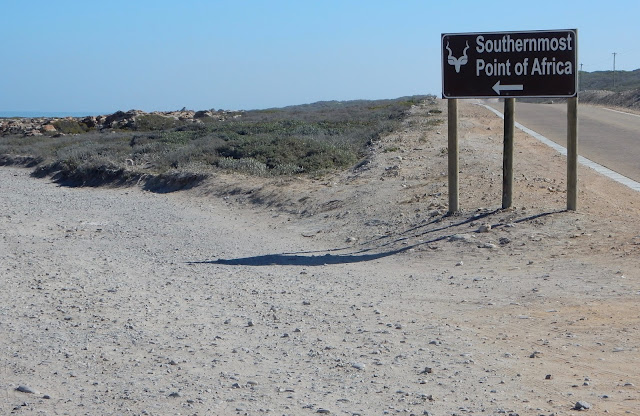 Julian and I celebrate making it all the way with no problems. 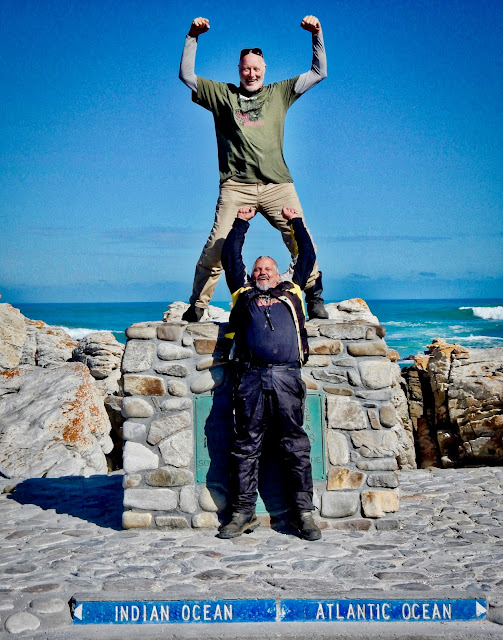 Am knee deep in both oceans 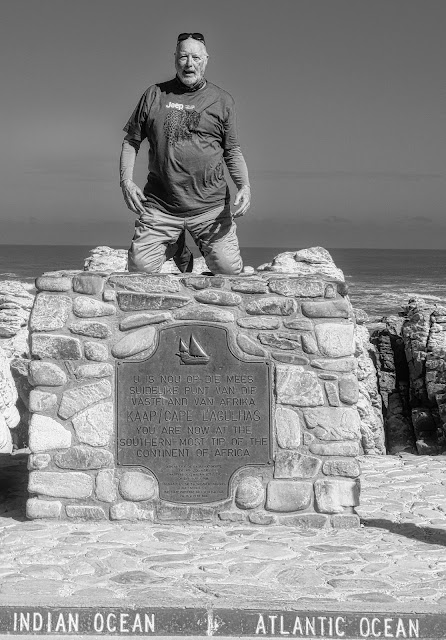 The lady in the lighthouse stamps our passports as proof we were here. 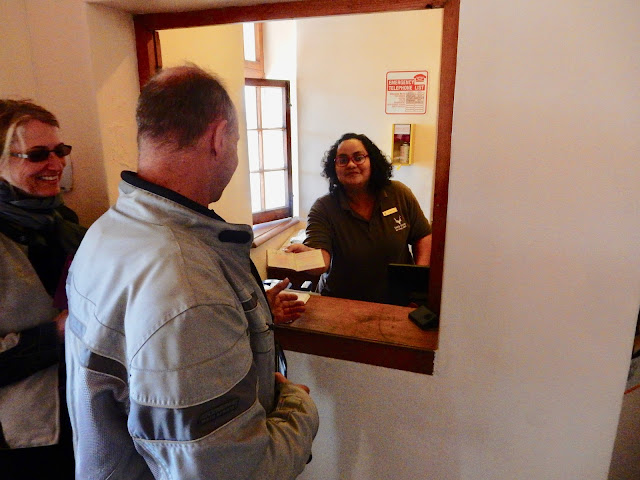 The view from my hotel balcony overlooking the ATLANTIC Ocean.
Is the first time I have seen the sun set on the Atlantic.

Our final day of riding starts with a visit to a penguin colony. 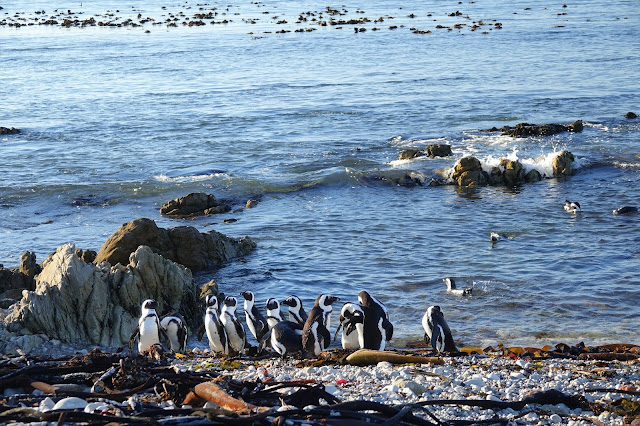 Joanne, the wife of the team filming our riding for a SAMA Tours promotional video, gets really close to the birds for a good shot. 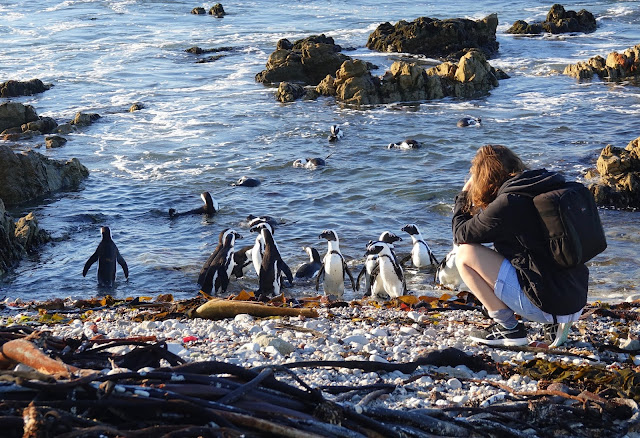 Billy says "Stand behind me girls. I'll protect you from these two legged giants." 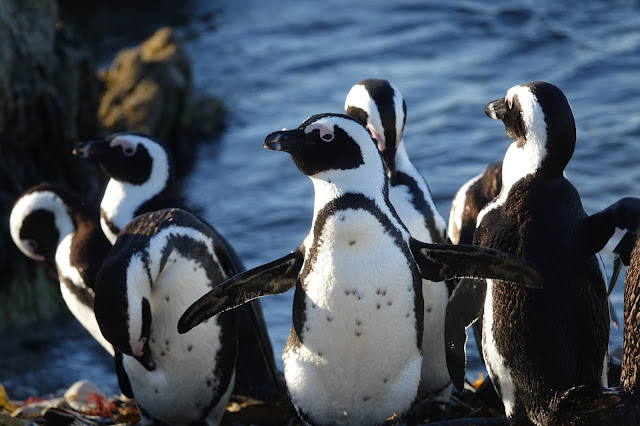 An ibis eavesdrops on a penguin breakfast club. 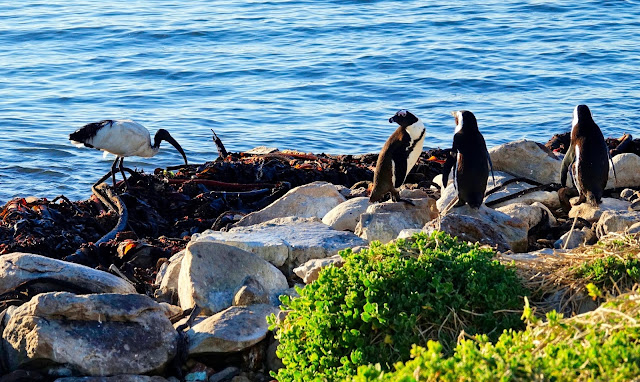 I swear Mabel, the shark was this big. 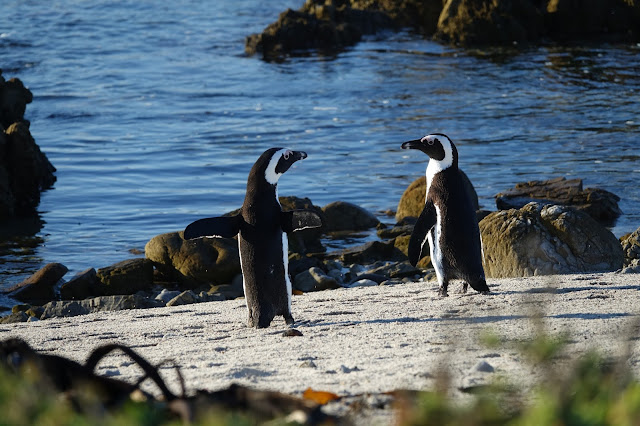 Stopping for a group photo at the Cape of Good Hope sign. 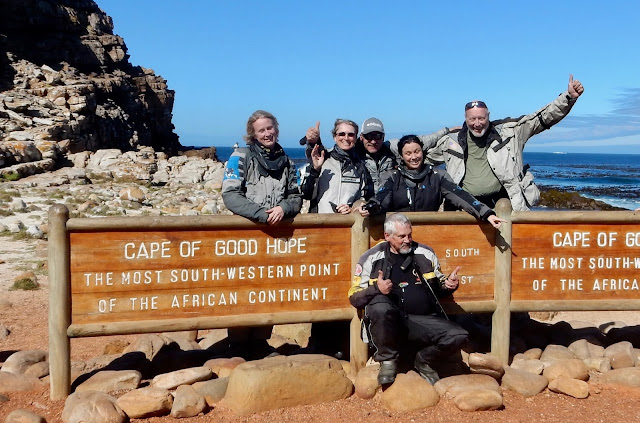 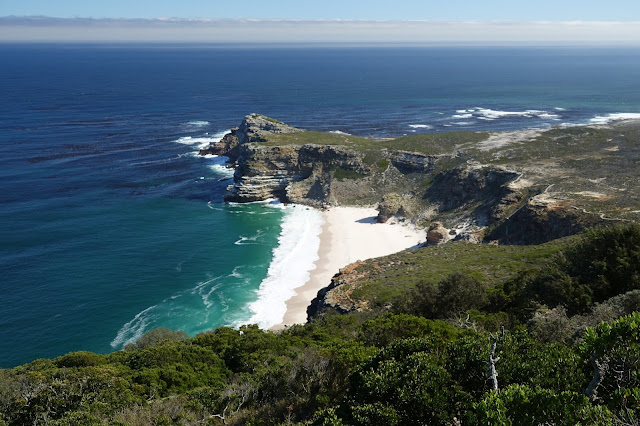 From Signal Hill, we have our first view of Cape Town. 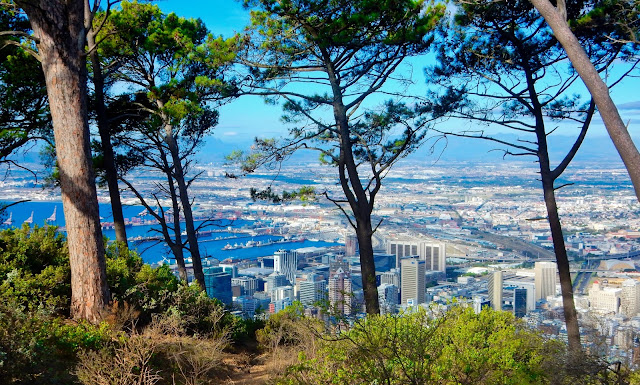 And Table Mountain, the famous landmark rises above Cape Town.
Were lucky to get this shot as the next day was cloudy and overcast so we cancelled our planned cable car ride to the top. 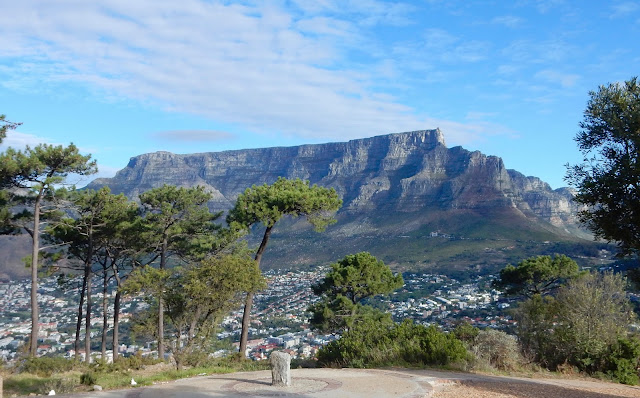 Tonight we turn in the bike keys, then go out and celebrate a fantastic experience and a great ride with new friends. From here Julian returns home to Pretoria, Georg and Eva meet up with some Canadian friends and fly to Namibia to see more of Africa.

Me?  Tomorrow I start a new adventure involving a train and more African animals.