Never have done much train travel, maybe cause they won't let me drive...

After finishing the 17 Day SAMA Tours motorcycle ride in Cape Town, now I needed to return to Johannesburg to make connections to Hoedspruit for a photo safari in Kruger National Park.
Flying is the quickest and cheapest, but you really don't see anything, just boring airports.

This might be my only opportunity to see the interior of South Africa,
as we rode the coastal roads from St Lucia to Cape Town.

The train ride is an overnight trip. The three options are:
Basic: the train hauls you to Johannesburg with no amenities
Premier Class: Train with meals and sleeping quarters
Blu Train: Luxury trip with private suite and bath.

However all three trains don't go every day. The Premier Class train fit my schedule. So Premier it is.
For those who have traveled long distances by train, these photos are going to seem old hat. For those who have never traveled by train, like myself, you might find them interesting. 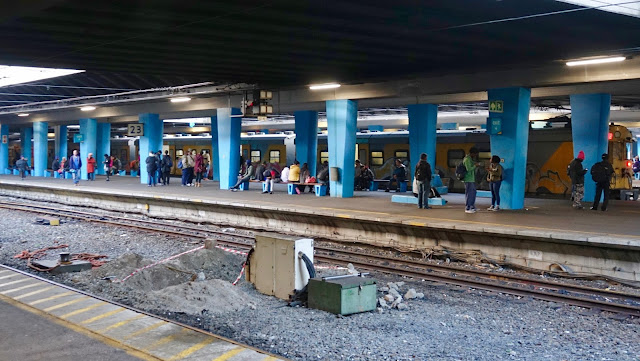 Found the Premier Class Lounge, free coffee and and a biscuit was offered. Better than waiting out on the platform. A total of 16 cabins were reserved, about half of the cabins available. The porter mentioned they were full coming down the day before. not so many returning to Jo-Burg this day. 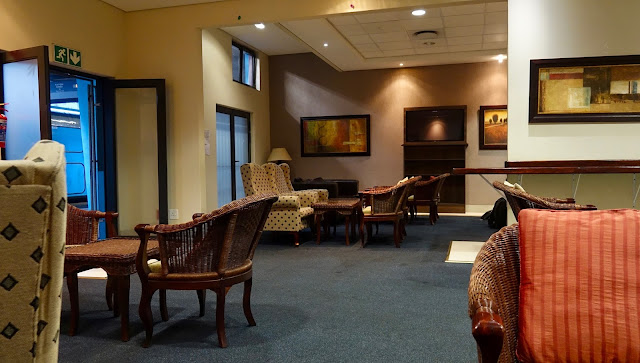 The Boarding call came so out we walked to our waiting blue car.

The walkway in the car to our cabins is narrow. 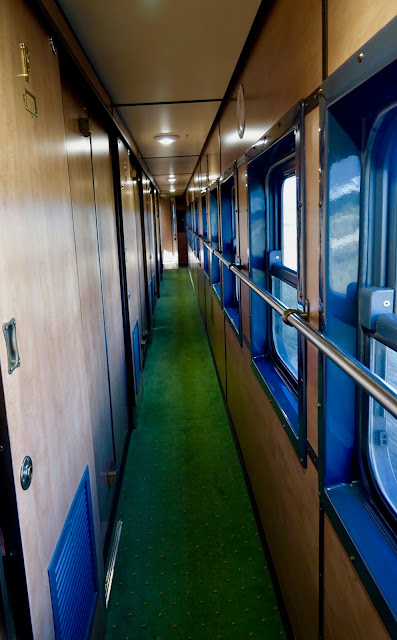 The lounge car is spacious, spent most of the trip here as the lounge windows
are larger than the cabin windows. Here one could easily watch the scenery roll by. 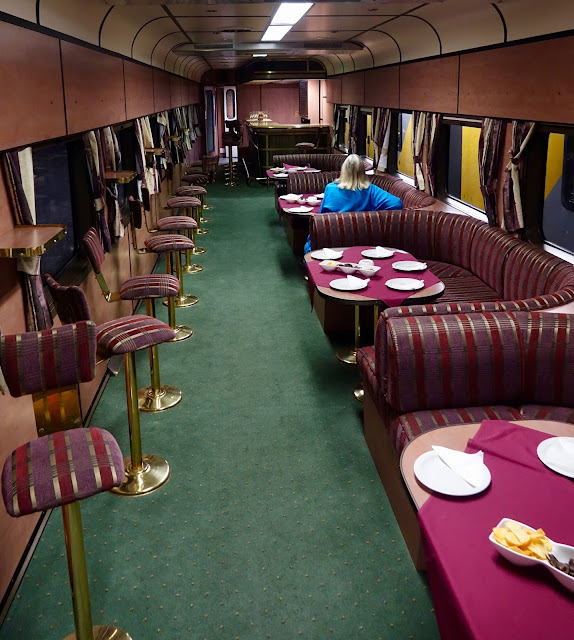 The dining car was only used for the provided meals. A five course dinner the first night was almost too much, until dessert arrived. Then there was still room for more.

Since there were not many passengers, the staff was almost bored during the trip. 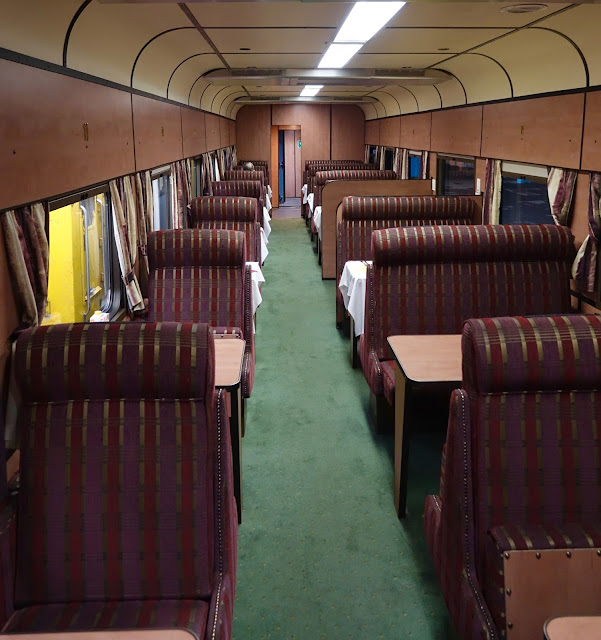 Met many of the other passengers:
Retired couple from Southern Italy, both with large digital cameras, he rides a Moto Guzzi.
Gilbert and his wife Msorie, retired from Pretoria, returning from visiting the grandchildren in Cape Town
Retired school teacher Steve and his wife from Australia, have a daughter in Geneva.
Young American couple from San Francisco, but he is from Lancaster, Ohio, near Ohio University where I studied.
An Indian couple who kept to themselves.
A young couple with an active two year old girl and expecting another.
Middle aged lady traveling with her mother; didn't talk with others or each other.
Older retired Afrikaan couple who don't like to fly.
An Iowa girl from Alabama traveling with a German guy from Alabama.
And....
Come to think of it, I was the only person traveling solo.

The train passes by the Afrikaans Language Monument. Afrikaans are the South African people of Dutch heritage. South Africa was first colonized by the Dutch in 1615. Later by the British. The Boer War at the turn of the 20th century was between the Dutch and the British over who would rule South Africa. The British won, but paid a very high human price for that victory.

All South African school children are taught both English and Afrikaan. Business is conducted in English, most conversations among friends and family is Afrikaan. 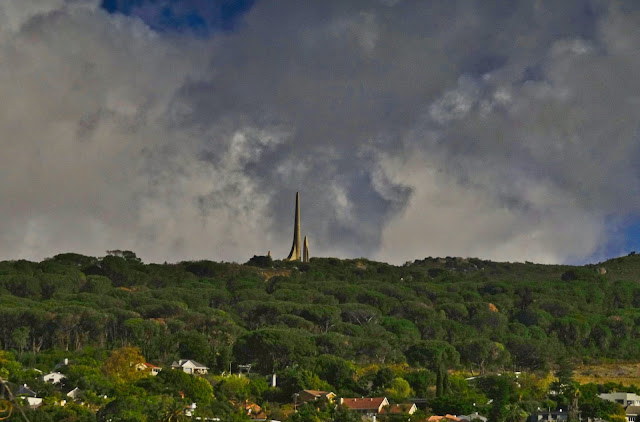 Near Cape Town there were numerous abandoned square stone buildings, not large at all.  Gilbert, the retired Afrikaan, said those were sentry posts from earlier years. Soldiers could fire from the second level to defend a roadway or railway. 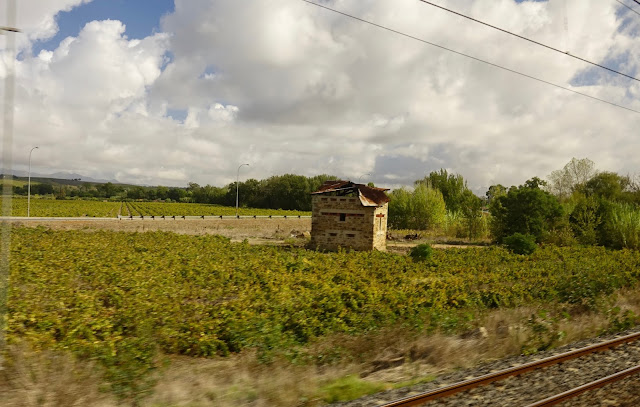 The railway climbs from sea level  into the mountains before crossing the high plains.

NOTE: There are overhead wires in most of these photos due to the train being electric powered, not diesel powered. 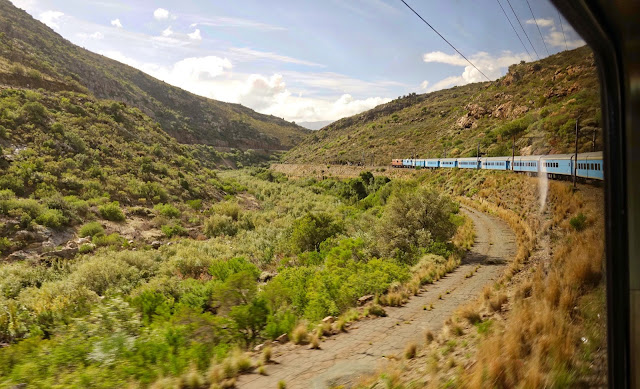 South Africa is abundant with agricultural products, from grapes for wine to apricots, peaches, sorghum and wheat.

They also have huge spreads for cattle, sheep and goats. Only saw one pig farm.
They are going into their winter now. The ranchers are waiting for winter rains to refill the stock tanks. 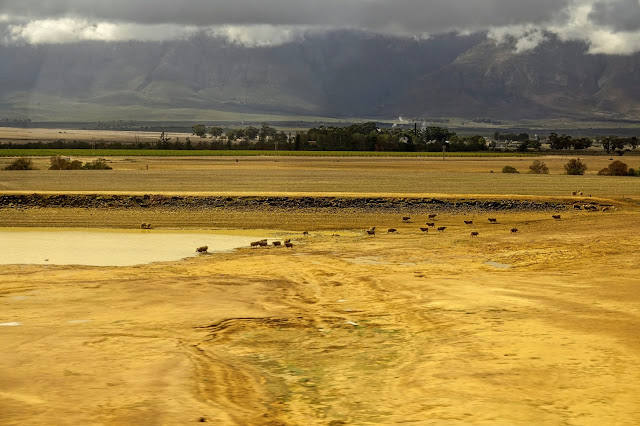 As the sun sets in the west, the train will roll on thru the night. Rocking and rolling us to sleep. 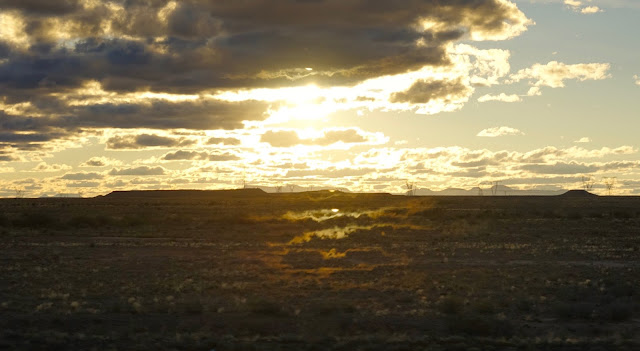 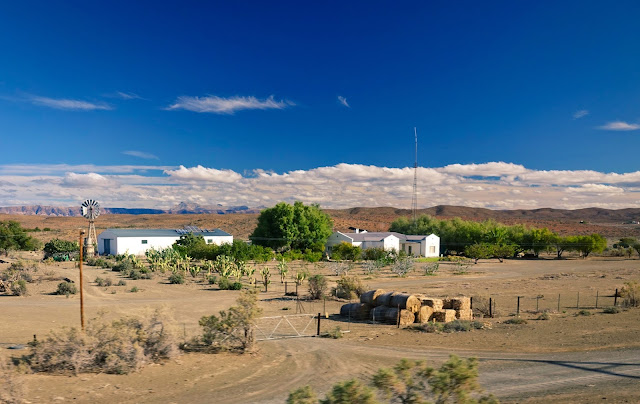 The flop-eared white cattle grazing in the morning sun.

Every so often we could see a grouping of farm houses where the owner lived. 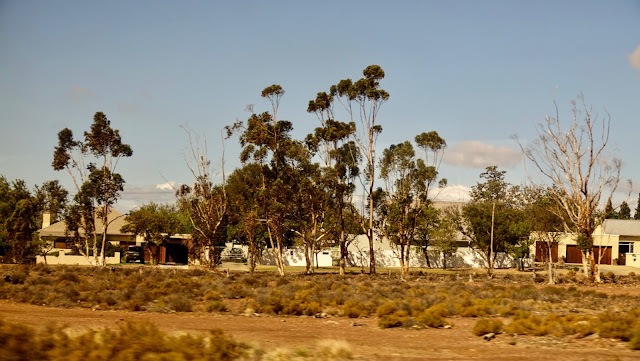 Then we would see the shanty towns that spring up out of nowhere.
Though cobbled together out of discarded materials, mainly tin and wood, many houses have a satellite dish on the roof. So they must have electricity too.

The government is trying to replace the shanty towns through their RDP agency -
Re-Development Project. They are building a better quality of housing for the working poor.

The government is trying to help their citizens but there are many illegal workers from other African countries coming here, occupying or building more shanty towns.

The no longer needed ornate rail station in Krugersdorp, built in 1896.

Arriving in the huge train terminal in Jo-Berg, I finally find the train to the airport by going up three levels on an escalator, then going back down four levels on other escalators. Two trains later finally arrive at the airport hotel for the night.