Day One: Day of the Elephants


The two - three hour Morning Drive starts with alarm music blaring at 5:15 AM.
Brush the teeth, get dressed and head over to the waiting safari rig. Two other couples decide to join the search.

The first animal Arina spots for us is a partially hidden elephant. The more drives we make, the better we get at seeing the animals ourselves. 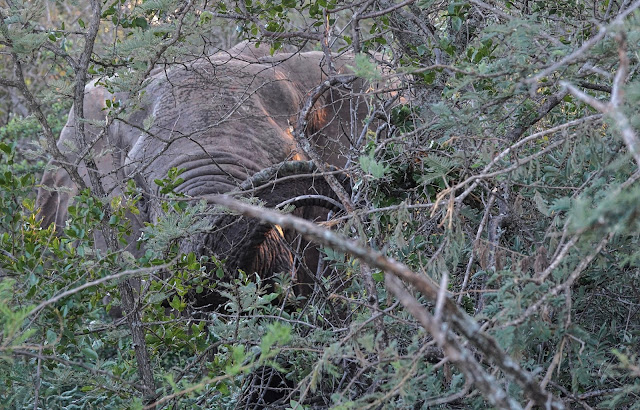 Arina knows her animals. Parking the rig then cutting off the motor,
she starts talking softly to the elephant.
"Come here, baby.    Come on.    Come on out." she coos.

Of course the elephant is not understanding, but Arina knows in which direction he is headed and has parked where we can get a good view of him if he decides to cross a clearing.
After several minutes of quietly waiting as he continues eating from tree to tree, he finally emerges into an opening.

Cameras ready, we get his portrait with the morning sun highlighting his back. 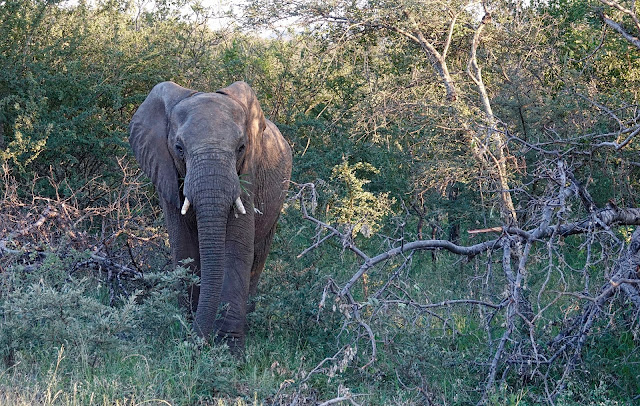 Our first giraffe was easy to spot. Towering over us, he is standing in the middle of the road
as we come around a curve.

Beautiful, graceful animals with a mean kick. Arina says they can kick hard in any direction.
So lions are wary of the adult giraffe, but will try to catch a young one if they can. 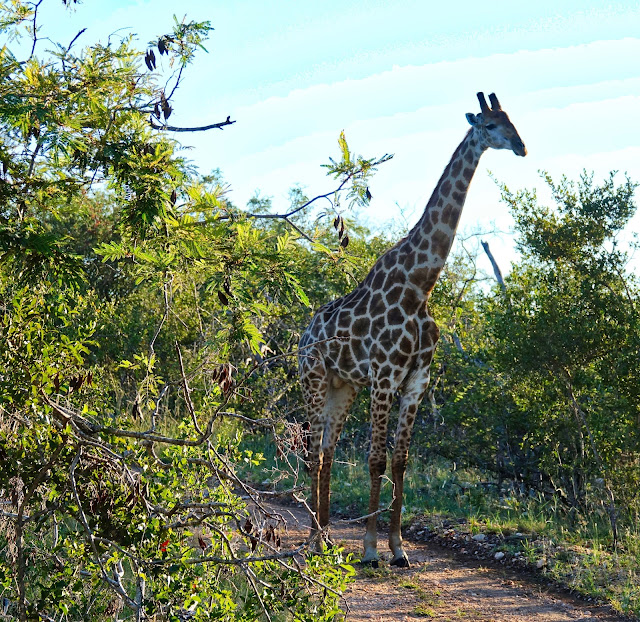 As we continue driving the dirt roads, a breeding herd of elephants crosses the road in front of us. Noisily they move thru the bush. Many times you will hear the elephants feeding before you see them as they easily snap trees with a loud cracking noise, like matchsticks being broken.

Needing to consume 250-300 lbs of food each day, elephants are constantly on the move.
Eating as they go. Elephants will push over or break down trees in order to eat the more succulent leaves at the top.  Some areas looked like a tornado passed thru with all the downed trees. Elephants don't completely strip a tree of leaves, but grab a bite or two then move to the next tree or shrub. Though it looks like a huge waste, knocking over a tree to eat just a few branches, leaving the rest. Arina said the smaller animals in the bush benefit from a downed tree with easier access to the leaves plus a downed tree provides shade and shelter under the thicket of top branches now on the ground. We spotted places where smaller animals had made themselves a shady cave under a downed tree. 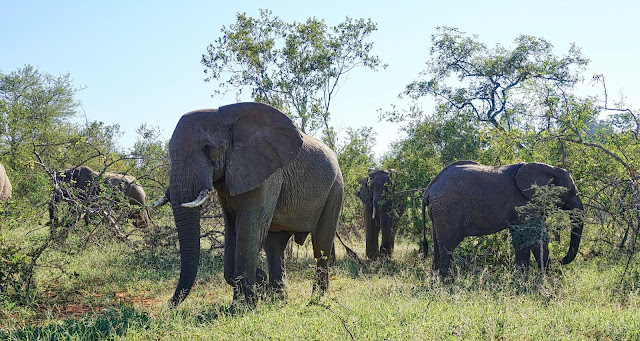 Arina stops the rig in a safe stop so as not to be caught in the middle of this herd of eight.  She says there are reports of elephants pushing over safari rigs that have caught up in the middle.
Breeding elephants attack or push over a rig thinking they are protecting their young.

Speaking of which, a baby elephant pops out from the bush. This youngster is following his mother,
learning what to eat, how to live and survive in the wild. 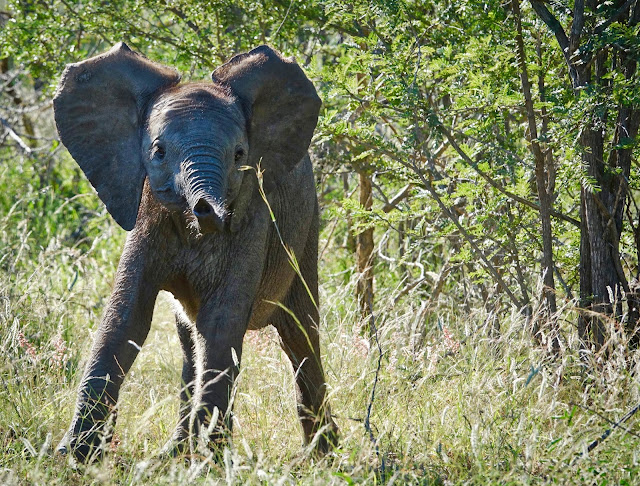 The herd matriarch chooses the direction and sets the pace for the constantly moving herd. 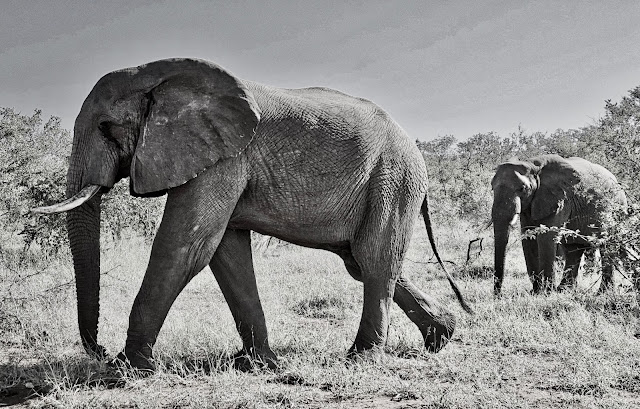 In an open power line road, we spot Giraffes with Zebras. Arina says it is very common for giraffe and zebra to travel together. They rely on each other to spot predators approaching, giving safety to both groups.

That concludes our first morning drive.

The Afternoon Drive started at 4 PM, when we head toward a remote area of the park. Each time we go out, we never know what we will see. We can drive thru an area, see nothing and five minutes later a herd of elephants will cross the road behind us. Luck will determine what we see or don't see each day.

While this is a smooth gravel road, others are quite rough and steep that require
having a 4X4 vehicle to navigate. There are only a few roads here open to the public. Many are restricted to authorized safari outfitters. 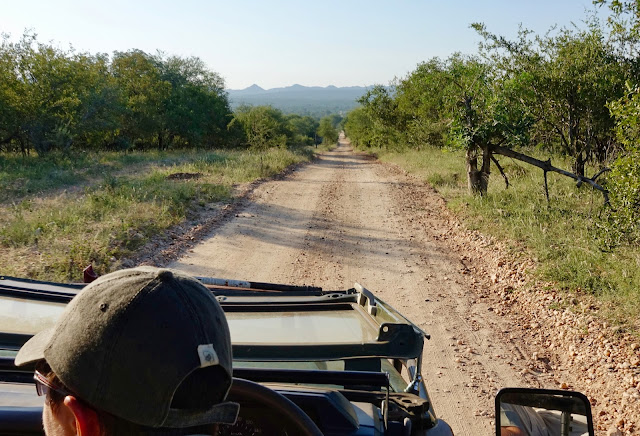 A mama elephant with her baby are spotted without a herd. They stayed in the bush. 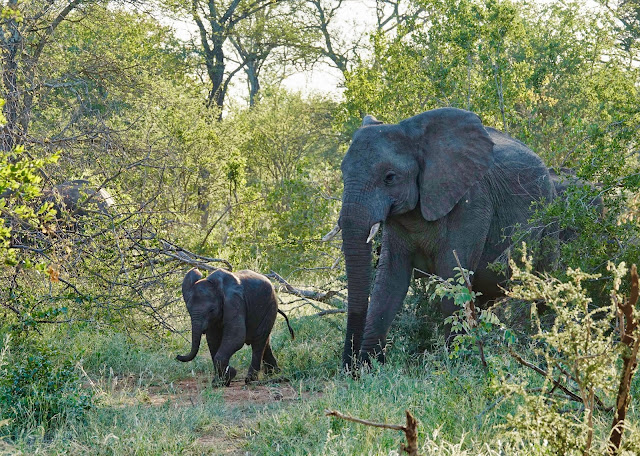 Word comes over the guide radio that a Rhinoceros has been spotted in a far section of the park.  We make the decision to drive quickly over there in hopes he is still there when we arrive.
There are no guarantees the animal will wait.

Luck is with us today. The solo Rhino is still hanging around the watering hole when we pull up. Rhinos are the most closely monitored, tracked and protected animal in the preserve because of the serious poaching problem. Poachers will kill a Rhino just to cut off the horn, leaving the rest of the animal to rot.

This is a White Rhinoceros. Doesn't look white does he?  Well, the difference between a white and a black rhinoceros is the shape of their top lip. When the British came here, they understood WHITE when they people were saying WIDE rhino. This is a wide mouth rhino, the other type is a pointed lip rhino. All rhinos are the same color. The misunderstanding has stuck, so this is a WHITE Rhinoceros. 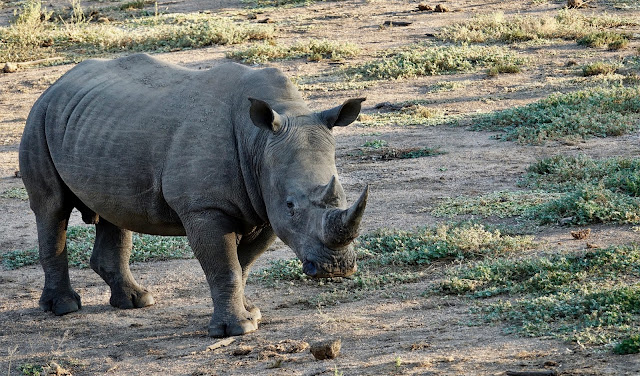 The guide who called in the Rhino sighting is parked nearby. These animals are not afraid of the safari rigs. Arina explains that the animals do not see the safari rigs as a metal can full of individuals but as just one large animal roaming the bush. All the human faces and arms inside are just part of a natural animal's camouflage. That is why we are cautioned to not lean out of the rig,  do not stand up,
make no sudden movements and stay quiet. 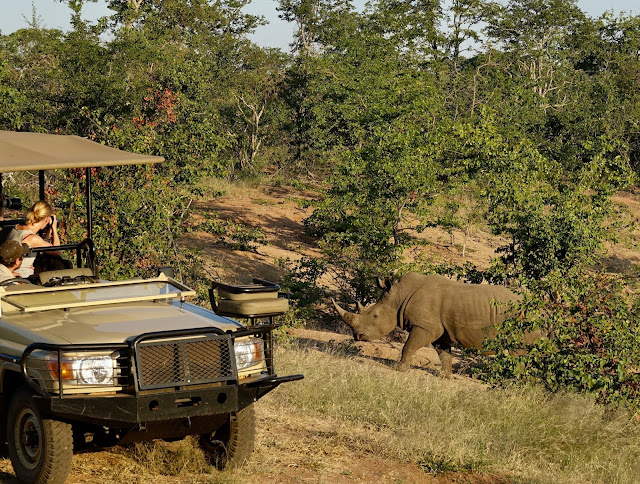 The permitted guides in the Parson's preserve stay in contact with each other for both safety reasons and to inform each other where they are and what they see.  They also assist the game warden and his team if any poachers are seen or heard.

Rhinoceros poaching is a serious threat to the remaining rhino population and are protected within the Kruger and adjoining preserves. The fees we pay for a photography safari helps to fund the game wardens and their staff.

Stopping for a cool refreshment near a watering hole, we watch the African sun set over the bush 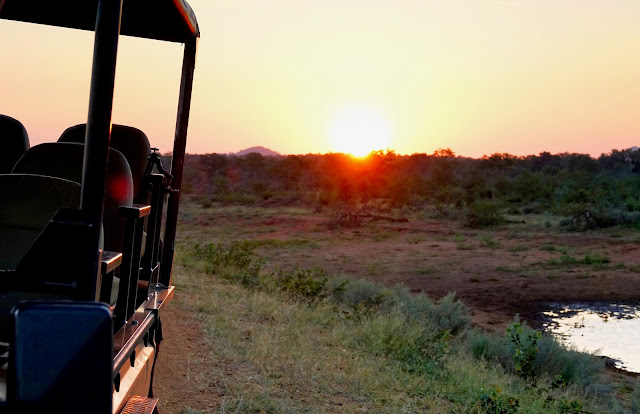 A great first day comes to an end. 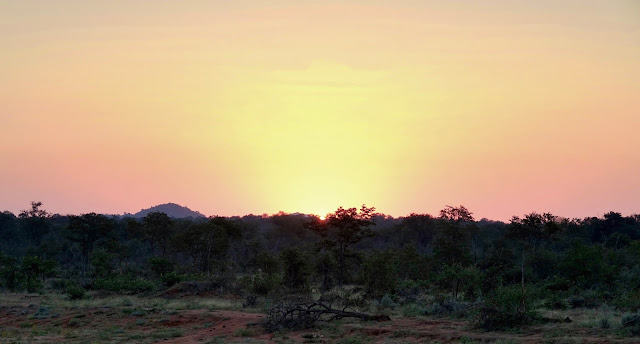 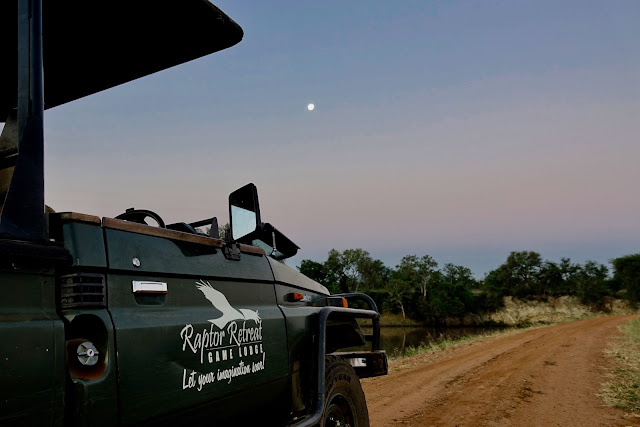 Back in the lodge, another delicious five course dinner awaits.
Spirits are high with the successful photos captured today.

Did not wake up more than three times during the night.