The Mexican Mariachi music on my iPhone alarm awakens me at 5:30.  A quick teeth brushing and off we go in the dark to see what we will see.

A dozing jackal is first spotted by Robbert from Holland.  The light is still dim, foreground weeds throw off the auto-focusing on the camera, but a shot is captured. 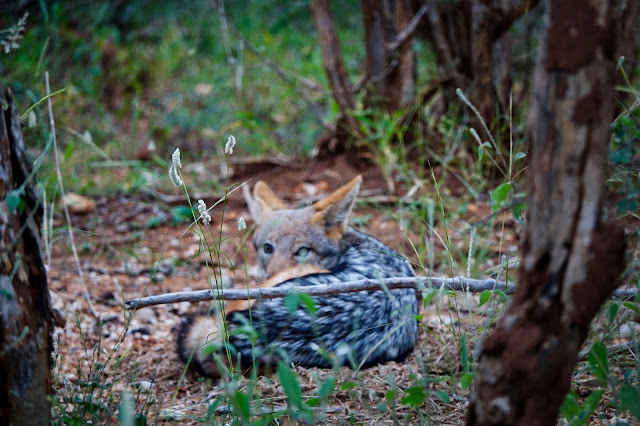 Here is a typical scene where an elephant has recently toppled a tree. So recent, the elephant dung in the middle of the road is still wet with urine. Look at the diameter of the broken tree and think about the force an elephant must use to snap a tree of that size, just to eat a few leaves.

Not all the roads we are driving are gravel. Am glad it has not been raining,
because this road would be a muddy mess if it had. 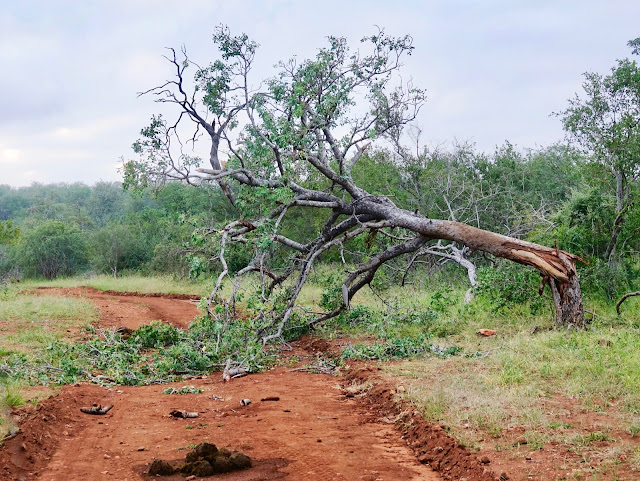 A breeding herd of Impala are spotted hiding in the bush.  A nice trophy buck with tall horns works hard to keep his harem intact. Can you spot him? 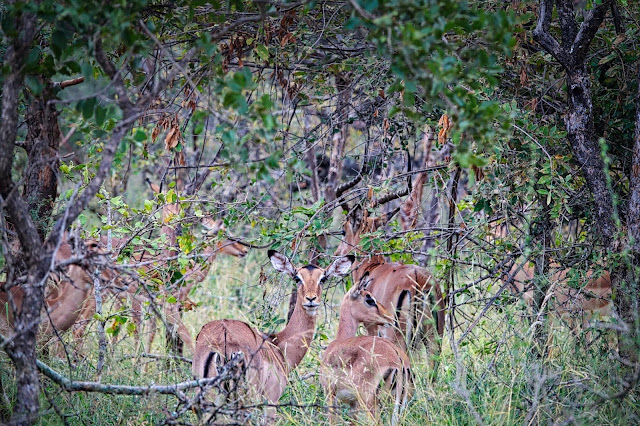 If one is thinking about wandering around a bit on foot in the bush, reconsider it!  There are many thorns, long and short, on the bushes that one must navigate. Arina warned us to not try and push away any branch that might swing into the rig when we pass by as most have sharp thorns. She was right, as a small sharp thorn snatched my hat off in an instant. 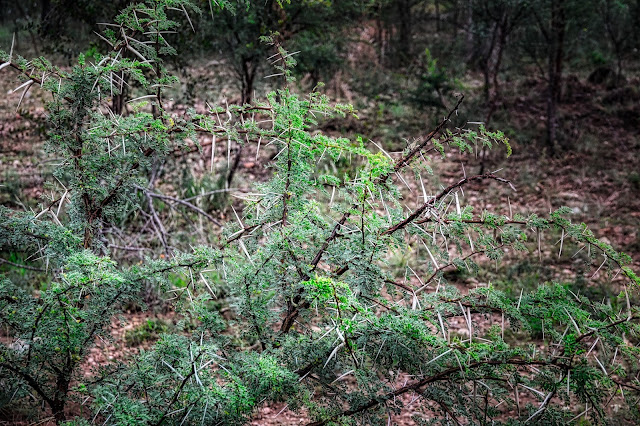 Mid-morning we make a rest stop at an overlook for bush coffee. The coffee is brewed then Amarula, an African liquor made from the fruit of the Marula tree is added. There are tales even videos about elephants or other animals getting drunk on the fermented marula fruit. Arina says those are staged events. An animal could not eat enough fermented marula fruit in the wild to get drunk. 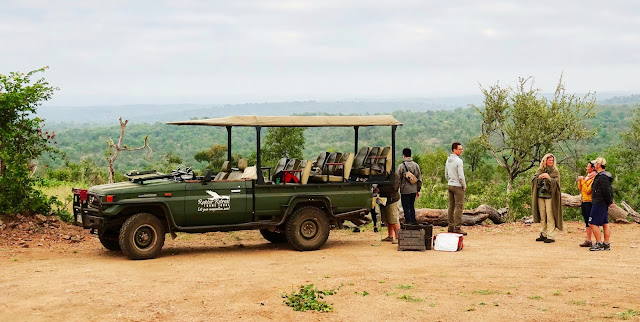 Three Zebra refuse to come out into the open, checking us out as we snap their portrait. 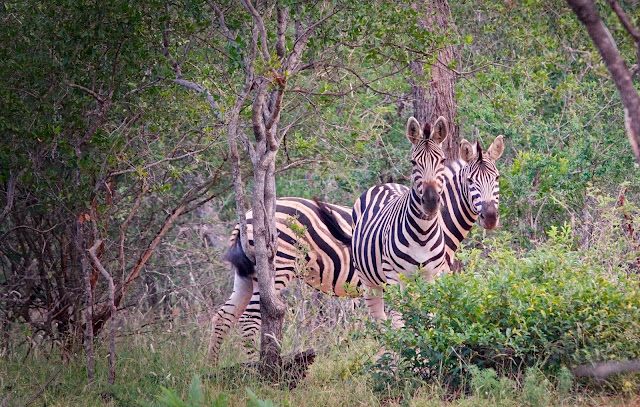 A large Elephant herd crosses an opening then disappears into the bush.
Can you spot the baby in the group?
It is absolutely amazing how these huge animals can quickly fade away into the bush.

The two oxpecker birds at work cleaning the giraffe's hide of ticks and insects. Oxpeckers can be seen on every big animal here that tolerates the birds riding on their backs.
In reality these birds are very beneficial to their host animal.

A shy Steenbok forest deer is spotted. No horns so is a female. 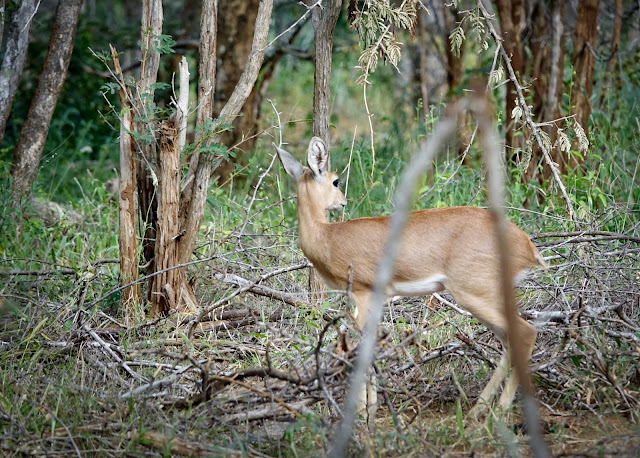 Back at the lodge, the warthogs are roaming, rooting for food. 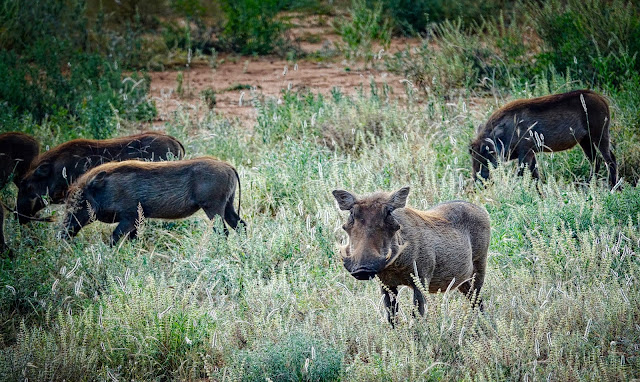 What a luxurious mane of hair with such an ugly face. 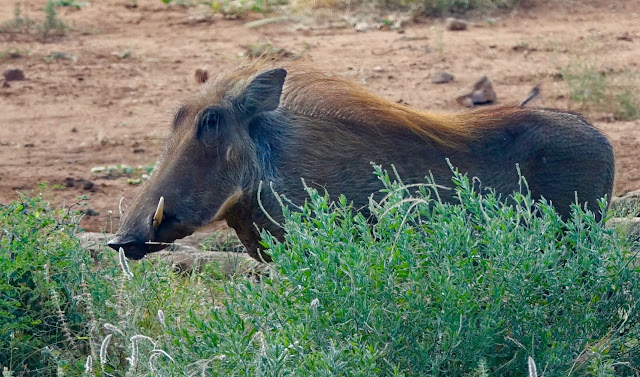 On the other hand, anyone know a good barber? 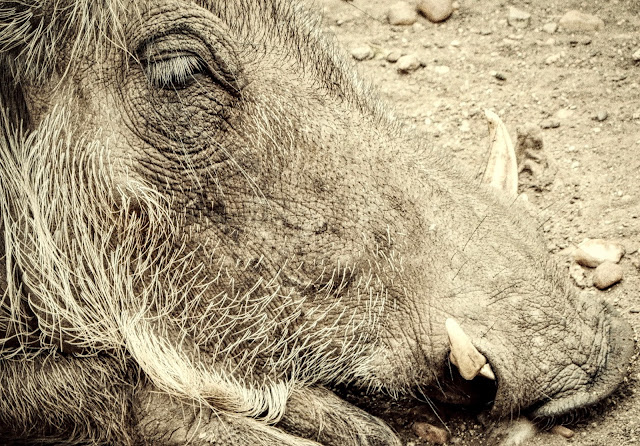 Now at the lodge, we take a siesta before heading back out for the afternoon drive

First turn out of the lodge this afternoon, Arina points out a
Dark Chanting Goshawk perched high in a dead tree.
Not sleeping, but searching for his next meal. 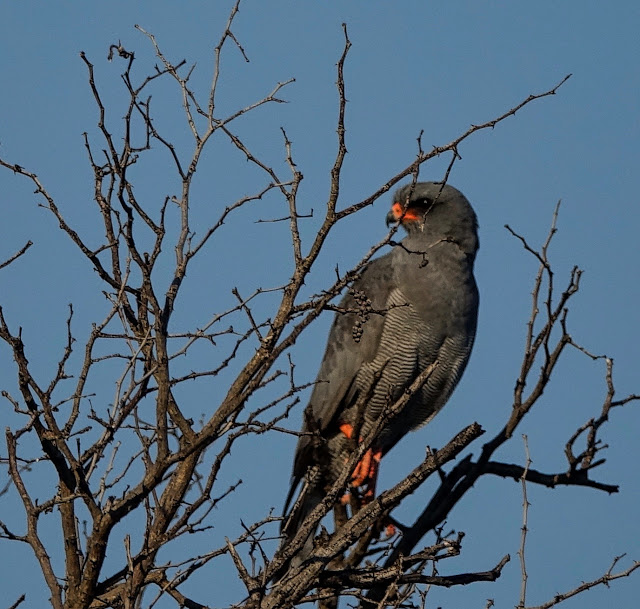 A baby giraffe dozes while mother keeps watch. Notice the change in pattern shapes on the adult giraffe's hide. The shapes on the hind quarters and legs look more like leaves than the larger patches on its back and neck. Better to blend in with the shorter vegetation while she feeds.
Nature's evolution in camouflage. 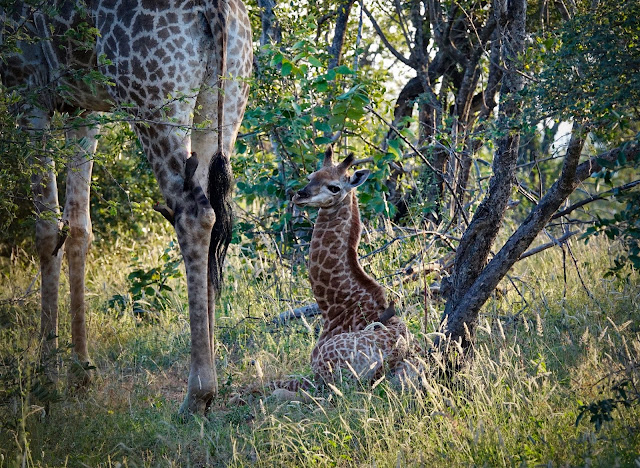 Now up, even a toddler Giraffe stands taller than my two meters. 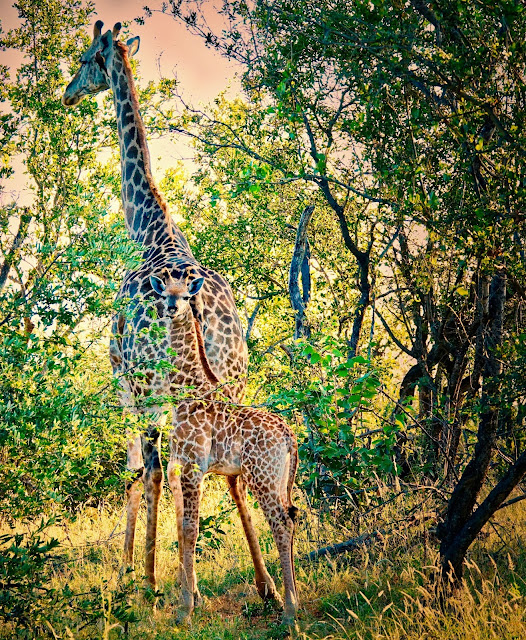 Captured a photo our first and only Waterbuck hiding in the bush.
Not with any females, so he has no harem. 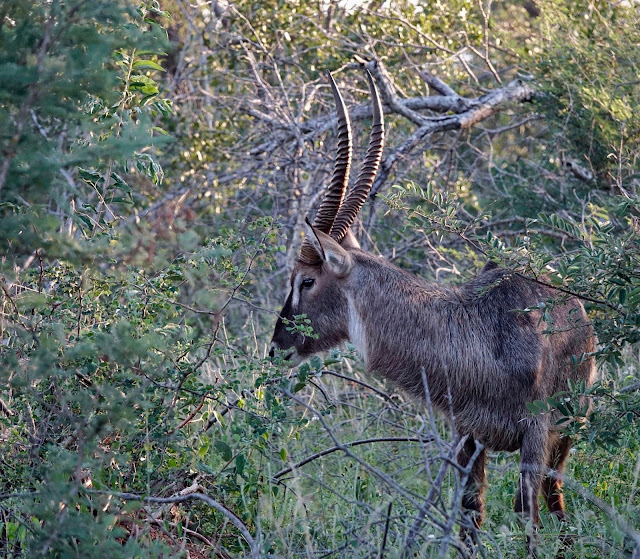 We drive to visit a remote watering hole to see if anything has come in.
Michelle from Holland once again spots an animal before anyone else. This afternoon she has seen the most animals before Robbert, her new husband or I can spot them.
She is a high school english teacher so has experience spotting students texting in class.

A herd of thirsty Cape Buffalo make their way single file down a dusty trail to the watering hole.
Nothing will stop their quest for water when thirsty. 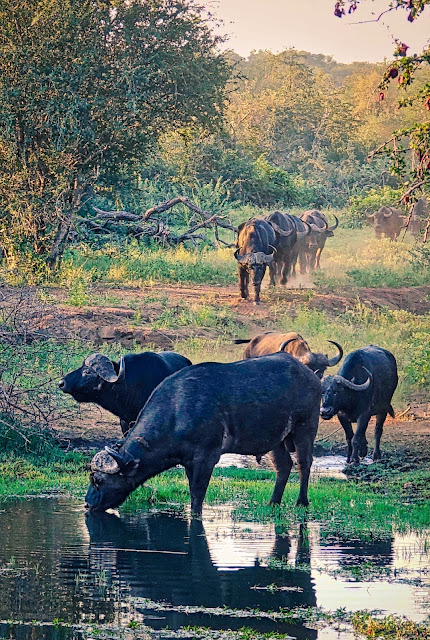 Boys, did you hear the one about two giraffes and a zebra walk into a bar? 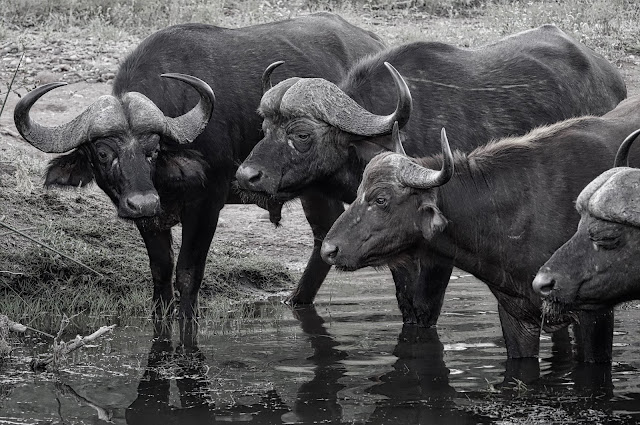 Another brilliant African sunset reflects off the Olilfants River. 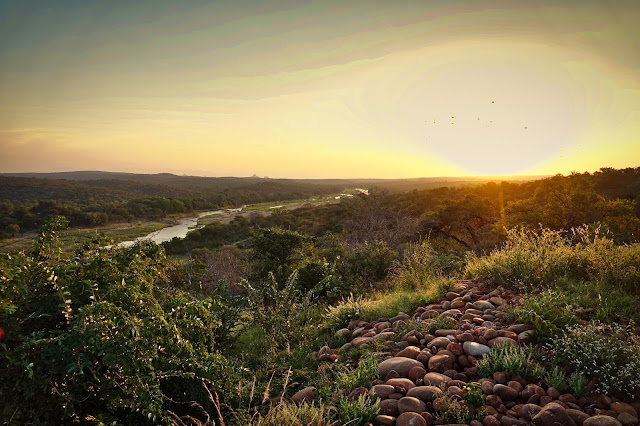 A fading sun silhouettes a Giraffe 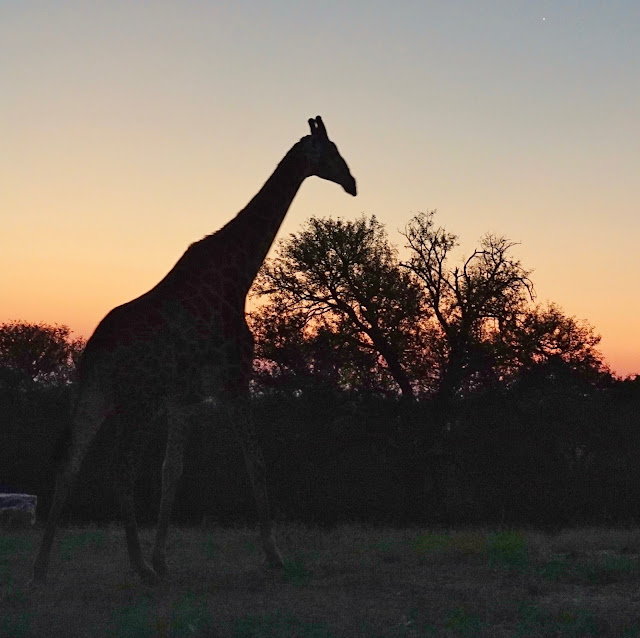 On the road back to the lodge, a Mama with two baby elephants are caught in the spotlight. Arina says elephants don't normally have twins, so either this is very unusual or...
the other mama is back in the bush. 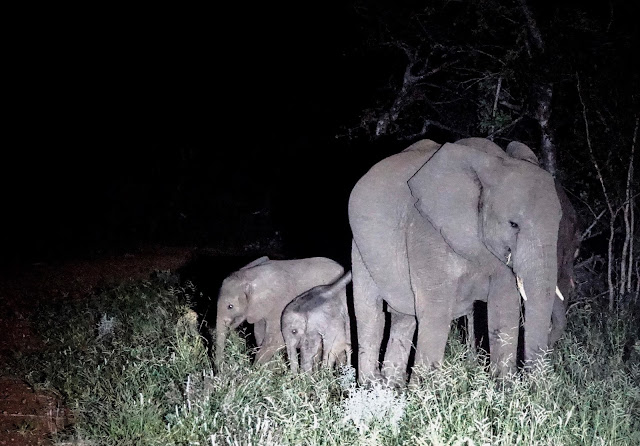 Thus concludes the second day of Big Game photography.
One day remains to capture images of the final two of the Big Five.