Our third and final day here at Raptor Retreat felt great. Mood is up beat. With a full moon last night, I thought the animals should be moving around today. If they are moving, the more opportunities we will have to see them.

Leaving the lodge we turn right on the main road and head for the far end of the preserve. By the time we get there, a call comes over, "Lions Spotted".  Where?  Near our Lodge! What?

Quickly we turn the rig around and race back to the lodge. Arriving we find the safari rig who placed the call watching two lions resting on the roadway at the entrance to Raptor Retreat. 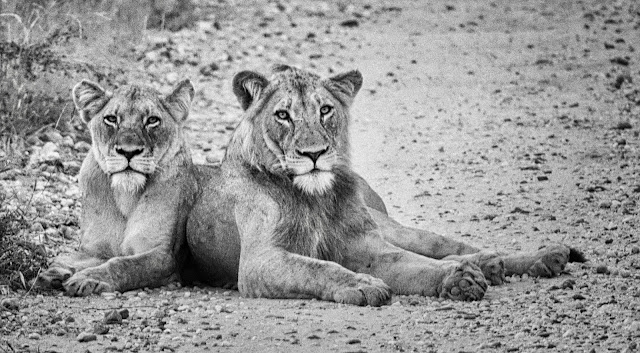 If we had turned left instead to right this morning, we would have run over them.

Searching the long grass and brush, we locate three more lions, a pride of five in all are traveling together.  We stay photographing them until they wander off into the bush. 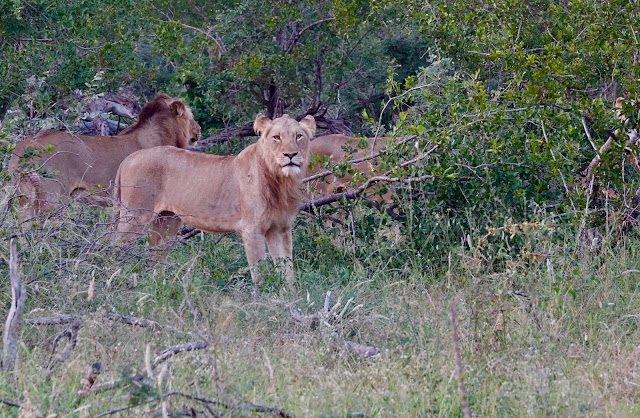 This is the battle scarred female of the pride.
A history of fierce struggles, wisdom and character are etched in that face. 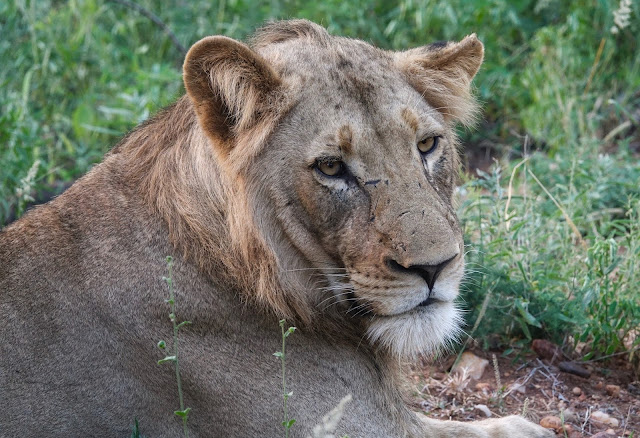 Am surprised how nonchalant they are with us busily snapping photos and whispering.
They don't see us as a threat and...  thankfully nor as food.

After a period of time they started getting restless. moving about, some wandering off.
Finally the others follow. 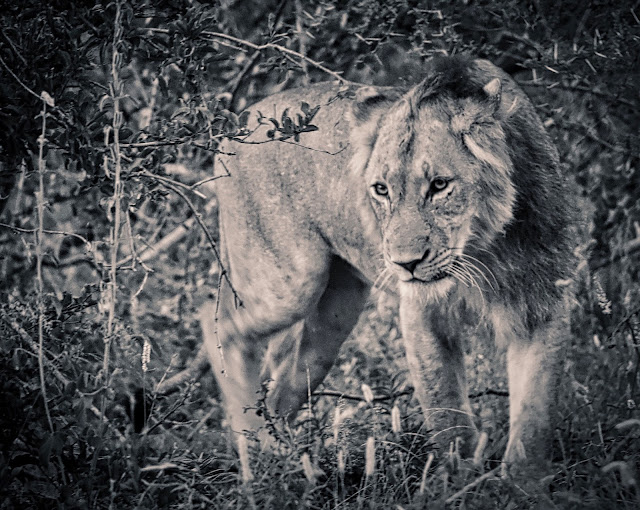 The largest male was the last to leave. 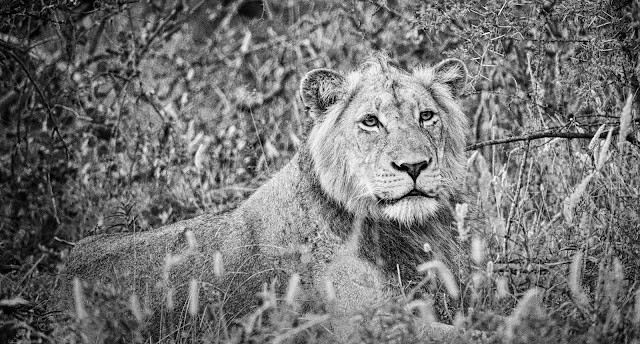 To give you an idea how close we were to them,  a lion crosses directly behind a safari rig. He then proceeded to get closer and smell the tire of the truck. The people inside were freaking out, paralyzed with fear.  Satisfied there was nothing to eat, he turned and walked off.

Note that there are no sides or top on this rig. If that lion had wanted to jump in, there was nothing to stop him. This is what is called an adventure. A story for your grandchildren. 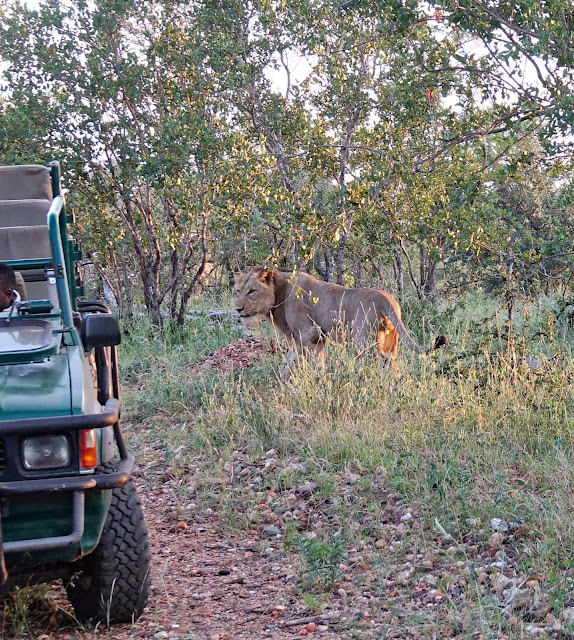 After all of that high tension excitement, here is a dull photo.

A tall termite mound towers over twice my height.
One sees termite mounds everywhere in the bush, most are not this tall. 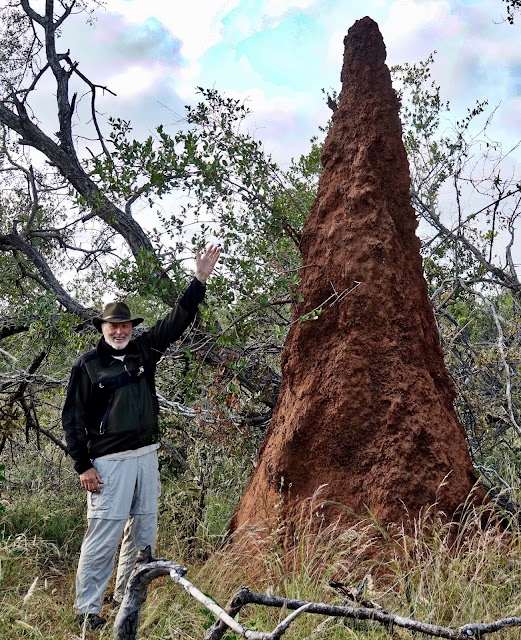 Returning back to the far corners of the preserve, we encountered a large bachelor herd of Impalas.
A lot of jealous males here as only a few of the males have gathered up
all the available females into harems. Sorry guys. maybe next year. 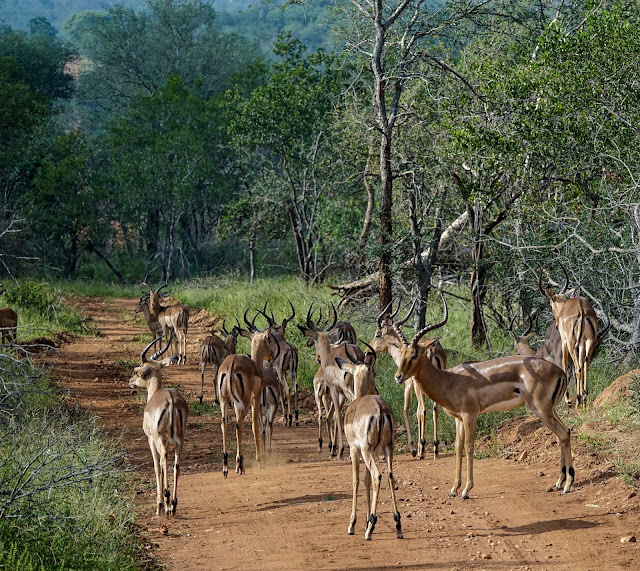 With the morning drive complete, we return to lodge for a siesta.
No lions near the entrance..., that we can see.

Going out for the final animal drive this afternoon, only the elusive leopard remains to be photographed. Arina takes us to a known leopard area, but no sign of movement. They may be only moving at night as there has been a bright full moon this week. 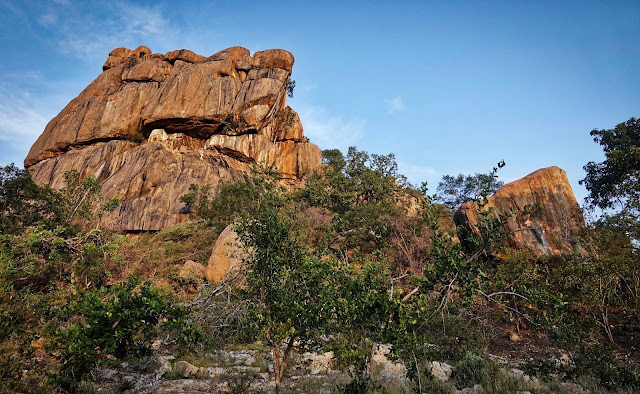 During my few days here, no leopard sightings have been reported by the other guides
or by the game warden.

We watch as a huge flock of small birds called the Cape Wagtail swoop thru the treetops, alighting here and there for a minute or two then on to the next tree. They are clearing the bush of insects and larvas that can strip a tree of its new growth, killing it. 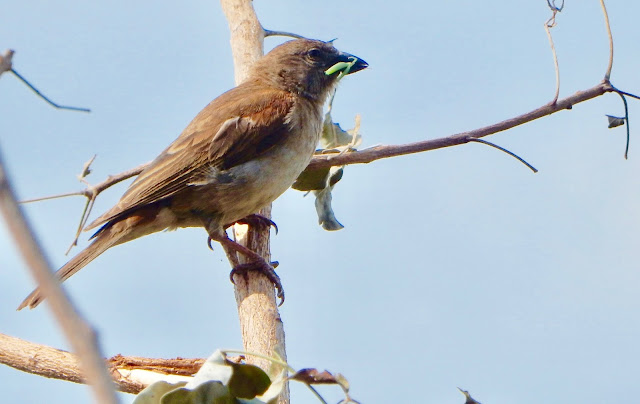 Is impressive to see these birds work together in a flock of hundreds.

A dark wave suddenly appears as if it is one large dark shape-shifting mist before you realize it is hundred of these birds flying together. The cloud rolls across the terrain at treetop level, in the trees, then back out of them. Rising, falling, down to water's edge and aloft again. Hundreds of birds in flight while hundreds more have landed on branches and twigs to grab an insect or a larva for lunch. Impressive in numbers alone, there seems to be no leader of the flock. The flock is its leader, a group activity, safety in numbers for survival.

Back to driving the dirt roads, we spot a lonely Impala buck.
He may have lost his harem to a bigger stronger male.
Hey buddy, there is always next year. Practice and grow strong. 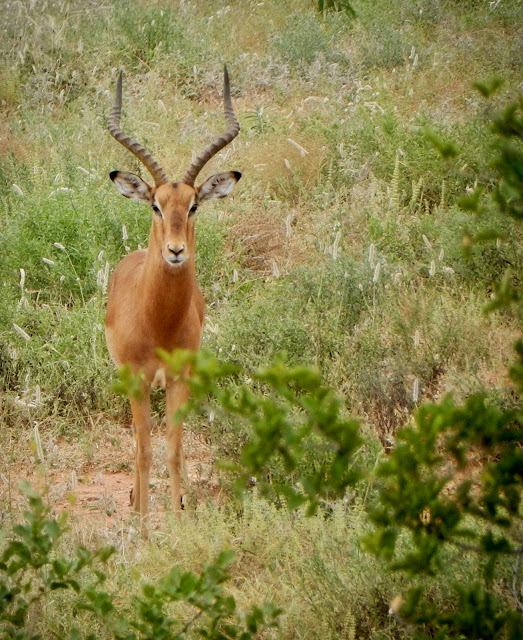 A male Kudu still has his harem. If you are wondering why so many animal harems are seen, this is the time of year for breeding in the Kruger. The animals normally mate during the rut or breeding season when the females are in heat. The strongest males will fight off the other males in order to pass on the best and strongest genes. That is how nature works,. The strongest survives. Only the healthiest and strongest reproduces. Passing on their genes ensures the survival of the species. 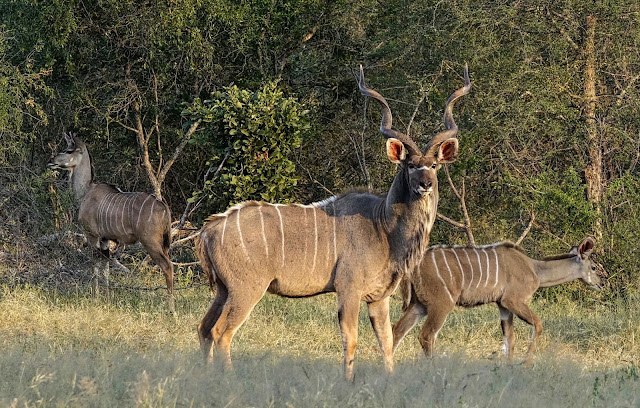 Late in the afternoon we get a call that the pride of lions we saw this morning have killed an impala. Once again they are near the entrance to our lodge. We race back to see them.

The light is fading fast and this is the only decent shot I could get. The lioness is holding the leg of the Impala under her paw.  We can hear the breaking of bone as she bites down on it. 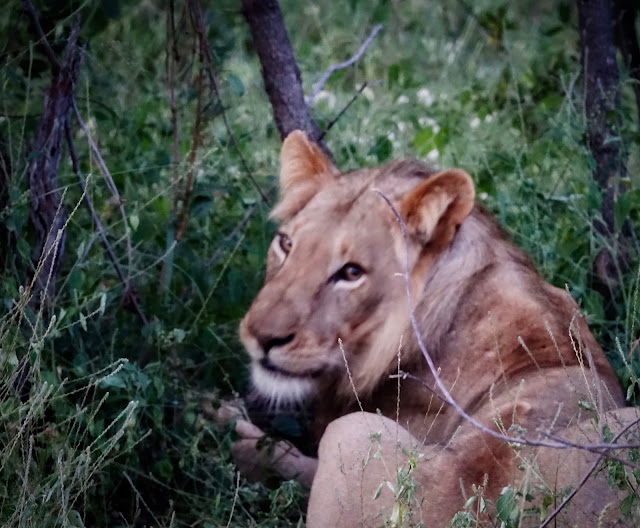 Reality sets in. We now realize why Yolande was so adamant about our safety in and around the lodge. These lions have been hanging around this spot all day, maybe last night too.
Where they made the impala kill is only a hundred yards or so from where we are sleeping.

The Raptor Retreat Lodge really is in the middle of Big Five country.

Just before racing back to see the lions, I captured another elephant image.
Shading his eyes from the sun, looks like he needs some Ray-Bans. 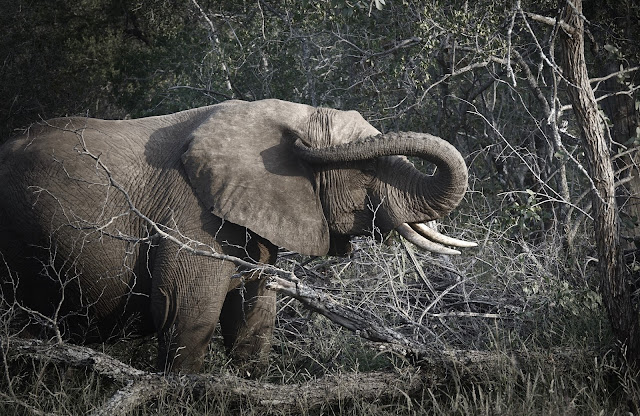 Four out of five is not bad. I knew before going in that the leopard would be the most elusive of all the Big Five. During the time there, no calls came in of a leopard sighting.  Well, all the more reason to return to Africa another day.

And so ends my African story. In the morning I fly to Johannesburg to catch a flight to the States, arriving back home in Texas the day after tomorrow.

When you make your trip to Raptor Retreat, say Hello to Arina, Yolande, Sharmaine and Keith from me. Their warm hospitality will make you feel special, then...
they'll show you the awesome Big Five of Africa.
http://www.raptorretreatlodge.co.za 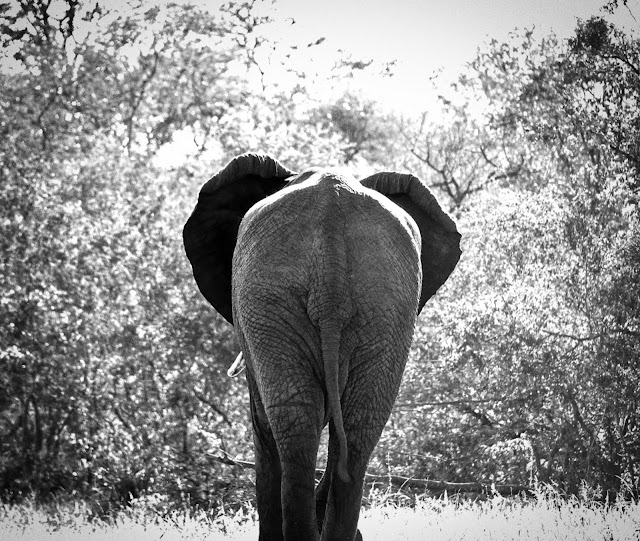 Ride safe my friends,
Riding life's horizon really is an adventure
if you are willing to brave it.