Being without s sidecar to ride here in New Mexico, I have focused on my photography hobby.  Out walking, was able to grab a few shots during the day.
Lying partially hidden in the sage brush, Grandma Doe guards the nursing area
of the mule deer fawns while their mothers are off grazing.
How do we know she is an older doe? The younger ones have the brown coloring up their necks and covering their faces. Grandma is showing her age with grey on the face and neck.
The fawns lie still, well hidden from the view of any predator... or photographer.
Grandma is content to protect her brood. 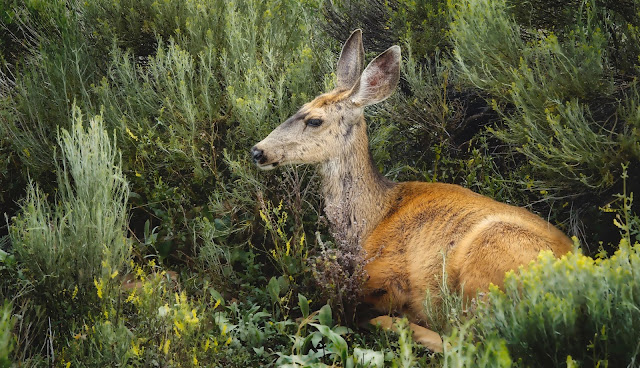 Ever wonder why they call Angel Fire, Angel Fire?
It's because of the occasional climate conditions that spawn a brillant sunset show. This is only the second time in six weeks we have seen the sky light up like this.
The first time I witnessed it years ago, my reaction was there was a severe forest fire on the mountain. 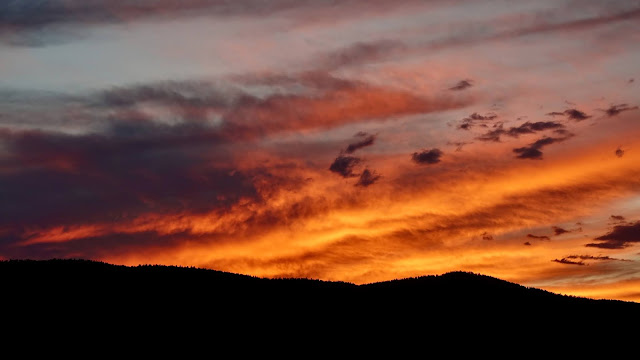 Was able to grab a few more night sky shots before the clouds moved in last week blocking the stars from being visible at night.  With few clouds to deal with, made another venture out to capture the night sky.
Why is the Milky Way more visible in the southern sky than the northern sky?  I do not know.  Anyone?
Why does it stretch from north to south and not east to west?
And why is it more colorful near the horizon than when looking straight up?
If you know the answers, please comment as I don't know.
Looking south from the pine forest, Saturn on the left and Jupiter, the larger brighter light on the right, are very visible in the southern sky next to the Milky Way. 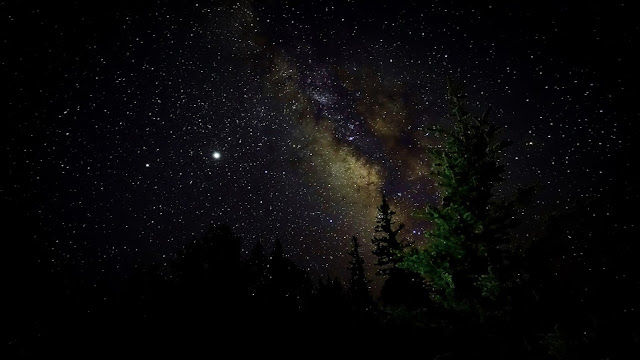 Well... was lucky once more to capture a shooting star, the Milky Way and both planets in the same photo. The long dark hours and cold are now meaningless after capturing this image. 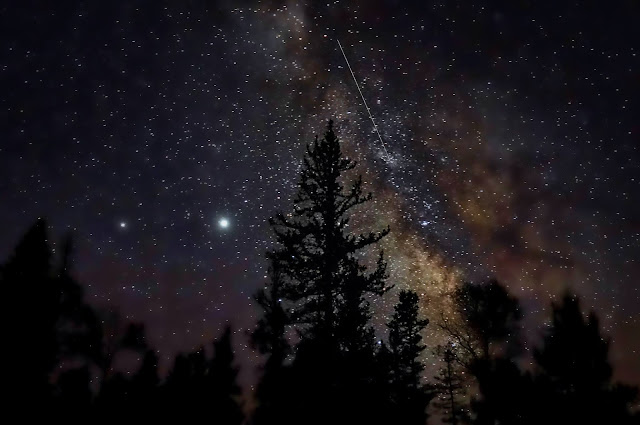 Was asked about a falling star versus a shooting star. From what I have observed, a falling star will drop more slowly toward the horizon with a fading glow, to disappear behind the tree line.
While a shooting star zips across the heavens in a burst of energy giving no indication it is heading toward earth. That's my amateur observation.
In googling the two events, many journal articles say they are the same thing... hmmm.  Scientific speaking, they may be correct. But that's not what I observed in the night sky. I'll stick with my definitions.
This week afternoon clouds move in, lingering around till early morning.
So no more sky photo shoots, leaving me time for editing the shots I did capture.
With the tropical storm Marco and the hurricane Laura threatening the Houston area,
Amparo and I delayed our return to Texas for another week.
Am getting anxious to pull my sidecar rig out for a ride.
Be safe my friends, mask up and keep your distance.
CCjon
Posted by CCjon at 10:00 PM