Amparo and I fell in love with Lithuania. But first we have to leave the Soviet Bloc.
At the Lithuanian border crossing, we surrendered our Russian Transit documents which were good for both Russia and Belarus. Then one goes through Lithuanian immigration as they are part of the European Union. Put away a few leftover Rubles and dig out the Euros.

What a quaint beautiful country Lithuania. Vilnius, the capital is small and compact with a population of only 540,000. The people are warmer and friendlier than the last two countries, still not a lot of smiles though. If you greet them on the street, they will at least acknowledge your greeting.

Downtown Vilnius is modern yet they preserved its old Old Town which lies directly across the river to the left of the white church. We stayed in the old town with its numerous narrow cobblestone streets heading off is all directions. Pick one and walk. Promise what you see and find will be gratifying.

The 13th century Gediminas Castle on the hill overlooking old and new Vilnius is now a museum,  . 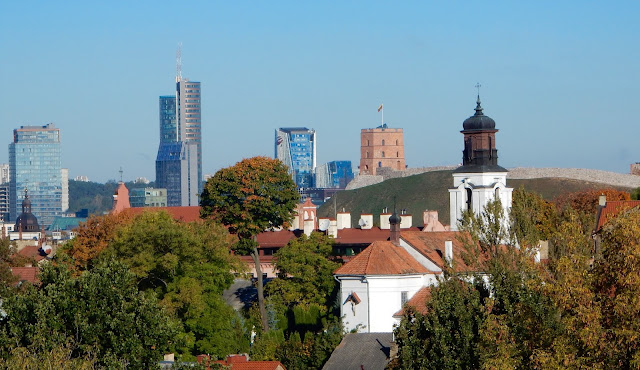 Gediminas Castle and the Church of the Holy Mother of God rise high
above the old town neighborhoods. 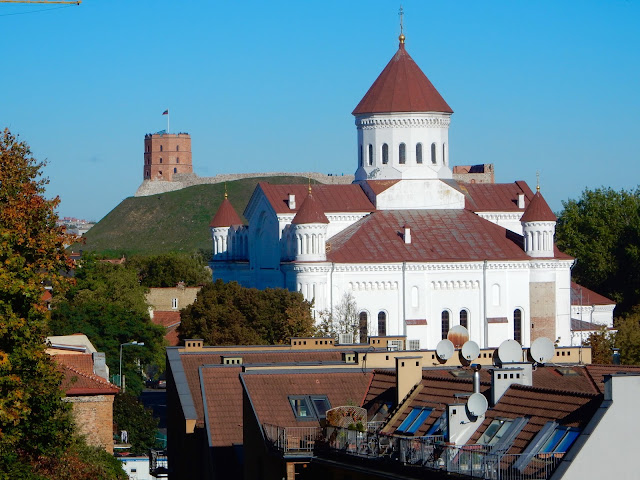 Our hotel, the Radisson Blu Astoria fronted the old cobblestone Rotusesaikste plaza.
From our warm room, we could watch townspeople scurry home crossing the open plaza holding their collars up tight against the cold night wind. 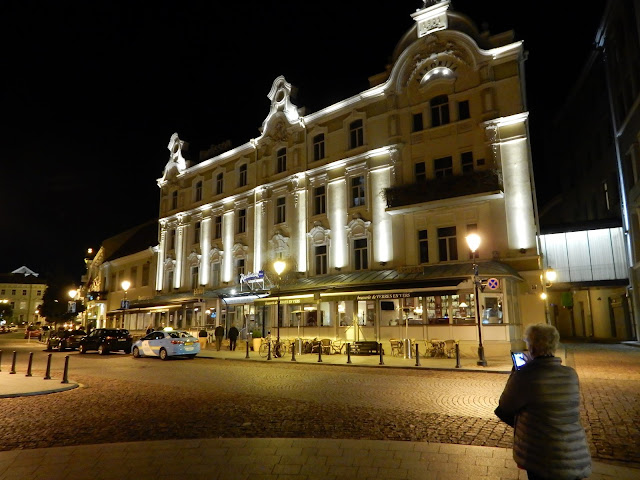 Last night's frost greets the morning sun. Fall has arrived with winter around the corner. 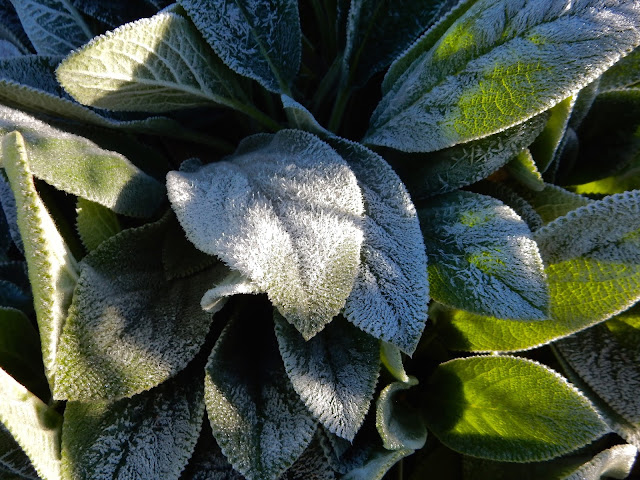 Some of the old town cobblestone streets was actually wide enough for a car,
which makes them a newer "old" street. Old old streets are only cart width. 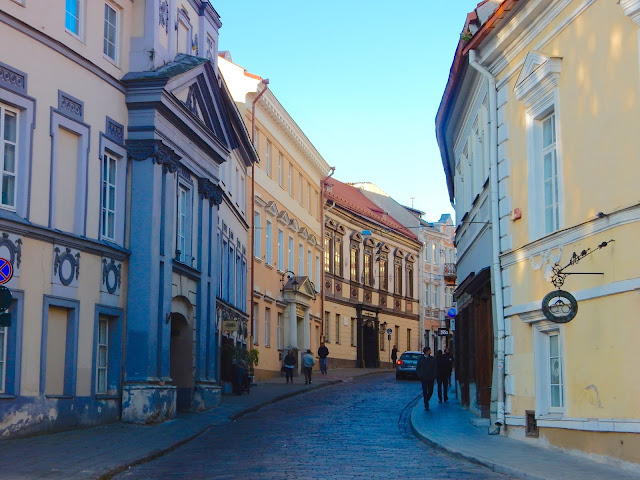 The Vilnus Roman Catholic Cathedral and belfry. In the 13th century, the belfry was part of a defensive wall surrounding the city. When the wall came down, the tower was converted to a bell tower for the church. 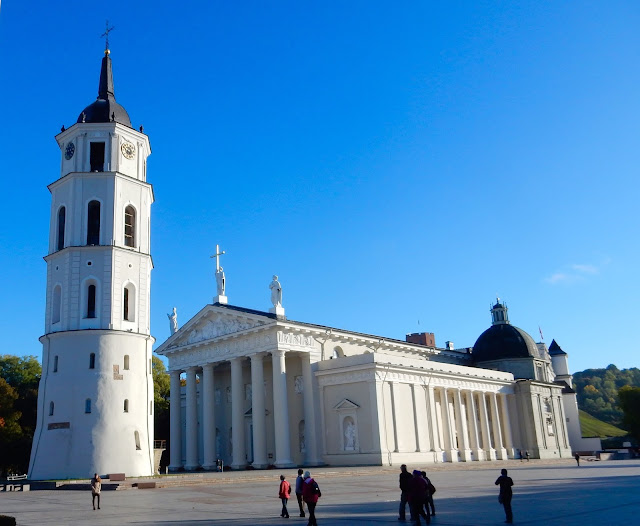 St. Nicolas' Church was a Catholic church until the 18th century when a Russian General ordered it confiscated and converted to a Russian Orthodox church. 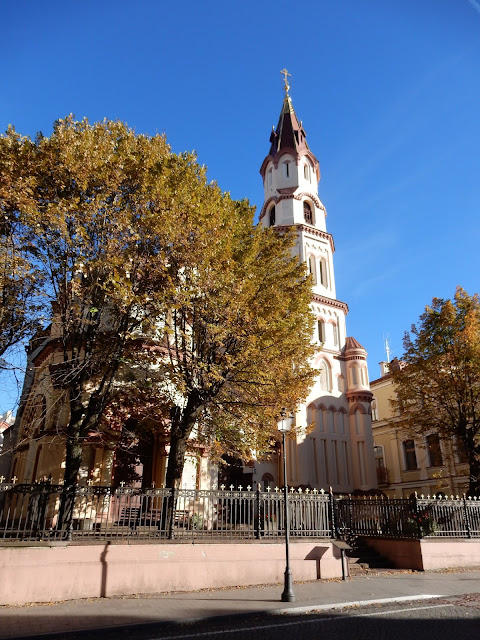 Enough of the churches, let's explore some narrow side streets.

Here is an interesting little street. Where will it lead?
Some might answer that with "a mugging?" No,  people still reside on these streets. Schools, shops and churches populate these areas too. They don't want crime in their neighborhoods any more than you and I want it in ours. Never once did we feel threatened or uncomfortable while wandering these little side streets. Not here in Vilnius nor in any of the countries we visited. 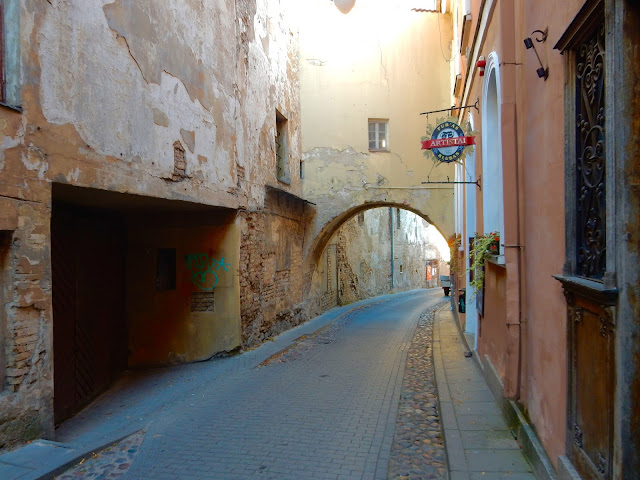 A local art gallery was promoting their latest exhibit high on the walls. 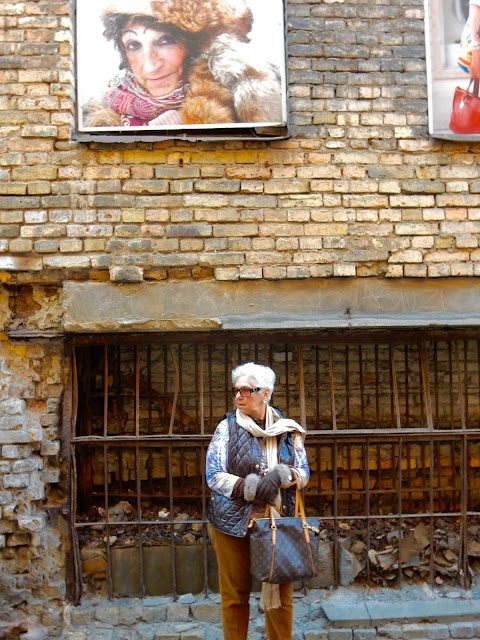 Amparo stopped to admire a large street drawing on an underpass. 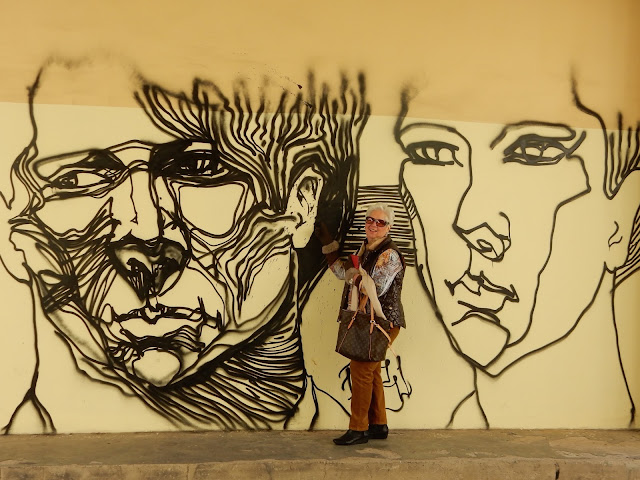 These little stands were throughout the city, where I could find my daily Diet Coke; 80¢ for the 20 oz bottle. The clerk inside stayed nice and warm while customers with collars flipped high bought their latte and smokes. Smoking is still quite popular across most of Europe. 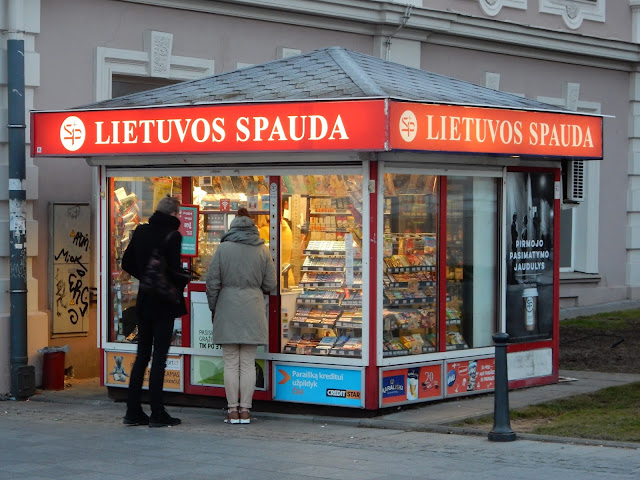 This is the third person we saw sweeping leaves.
By the looks of the tree, his work is not done. 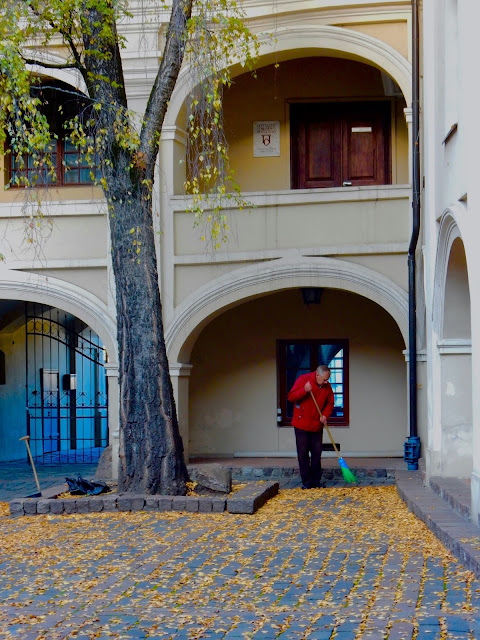 Make that fourth... Doesn't anyone have a rake?
What was nice? Not hearing the sound of gas powered leaf blowers. 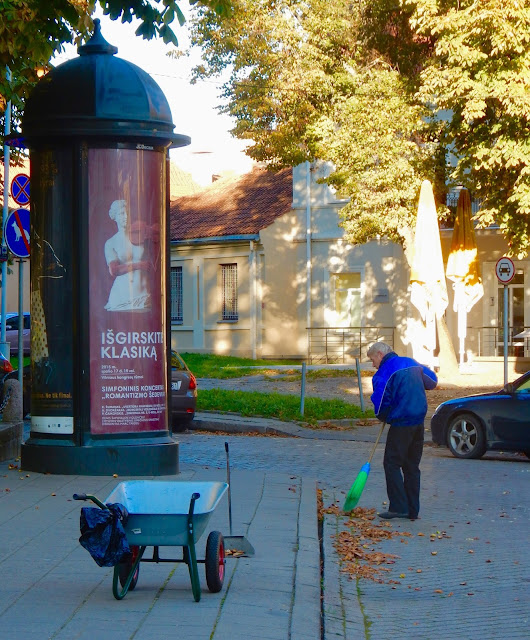 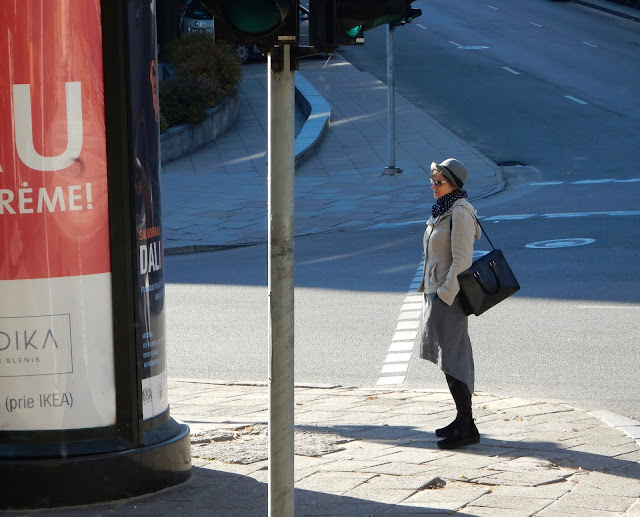 Just outside the old town, Vilnius has many quaint tranquil residential streets in and around the city.
Love the fall colors, very calming. 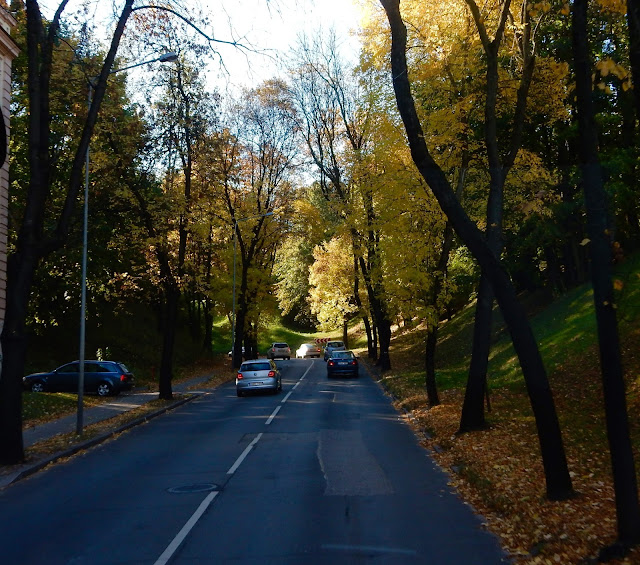 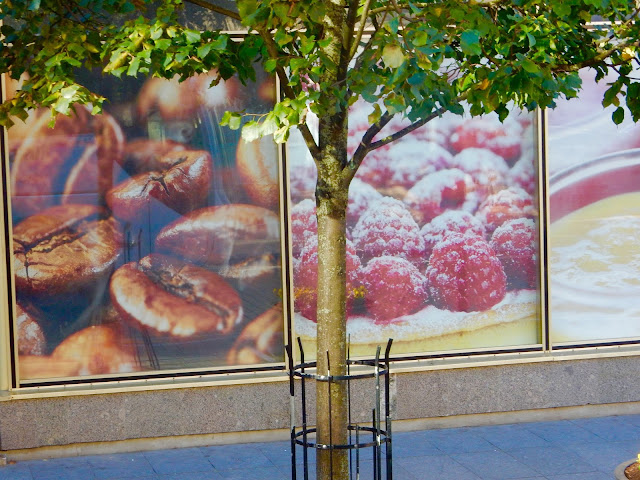 Like school children lined up for a class photo, all the flowers came out to soak up
the sun before winter arrives. 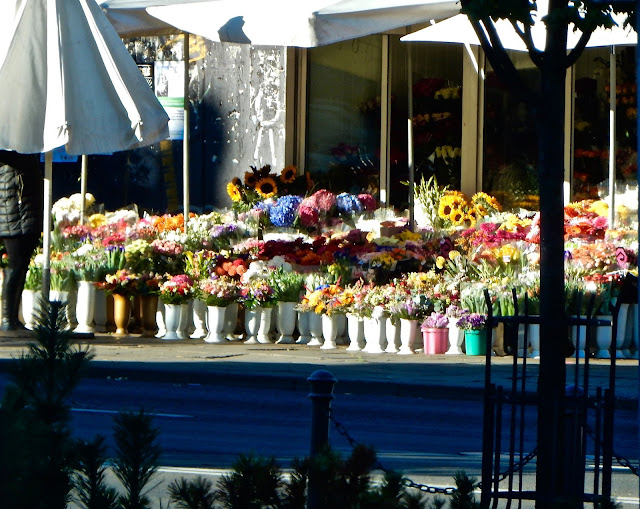 In a cafe window... can only offer a poor translation: "Big pot of boiled potatoes???" 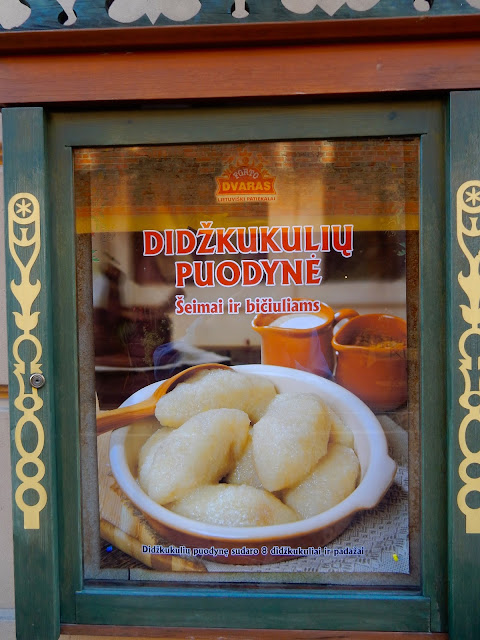 We wanted to experience a typical Lithuanian dinner complete with folk music and games. 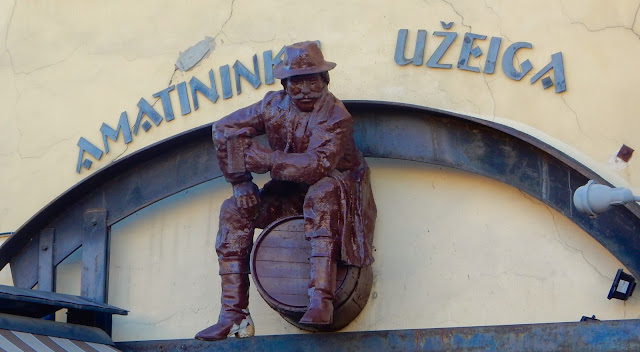 To make the atmosphere feel more authentic, it was set in a cellar with vaulted brick wall/ceiling. Maybe an old wine cellar? 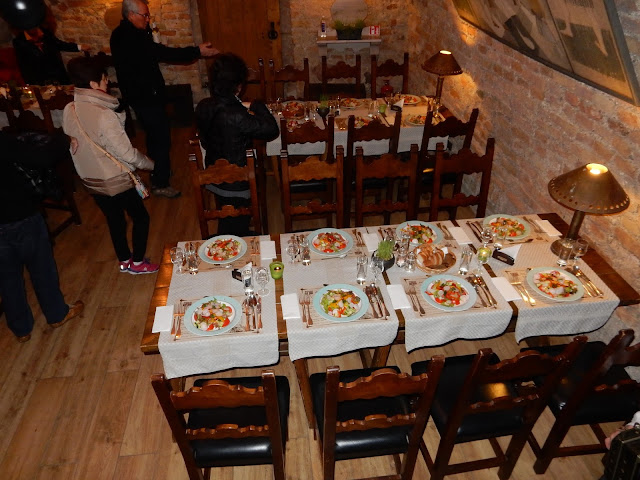 Some of the folk musicians were young, but they played with heart and soul. 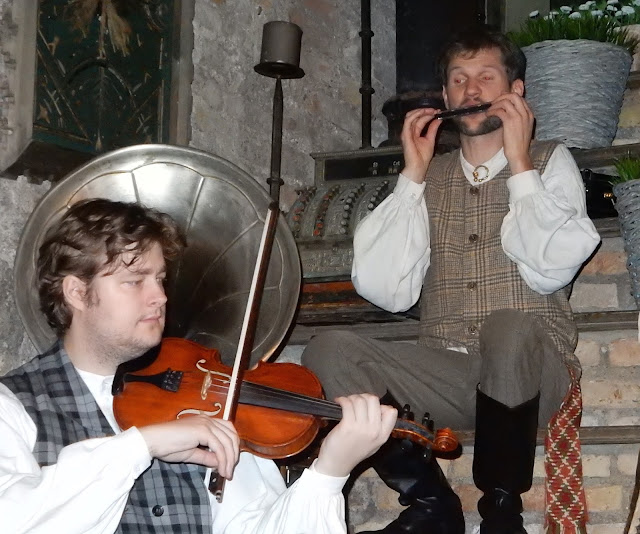 There were two games where Kojak John from Australia and I were pitted against each other.

First,  we were each given a hammer and a nail. The contest was to see who was the fastest to drive their nail all the way into a wooden stump. Sounds simple enough. The hidden challenge arose when we started hammering. The stump was uneven on the bottom, causing it to rocked from side to side with each blow. The nail heads bobbled and flopped side to side. After many many thumps on the stump, I finally won without bending my nail.

On to the second Challenge.
Which of us can chug a large mug of beer the fastest. Sound easy, right?
But try it while blindfolded, AND...
with each contestant hoisting the other guy's mug.
Good thing they draped extra large bibs over our fronts.

While John poured beer into my mouth I did the same to him, at least...
I think it was him, being blindfolded and all.

John beat me hands down on that one.  Or should I say, beat me bottoms up? 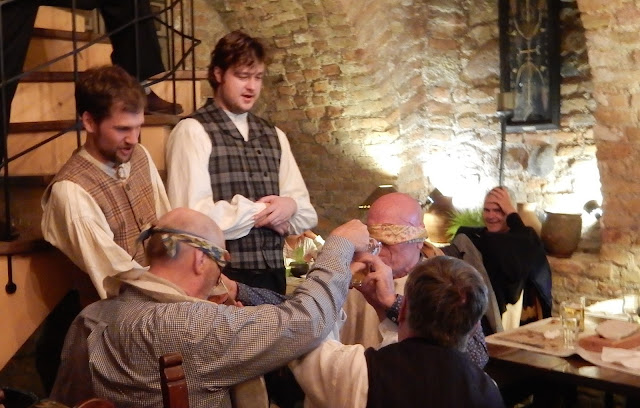 And now for some dancing... Lithuanian style. 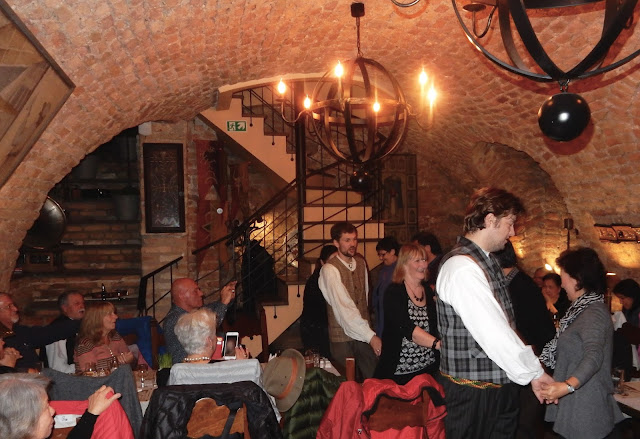 Back out in the streets, rental bikes but no one using them.
Seeing how the people in the background are bundled up, yes it was quite cool. 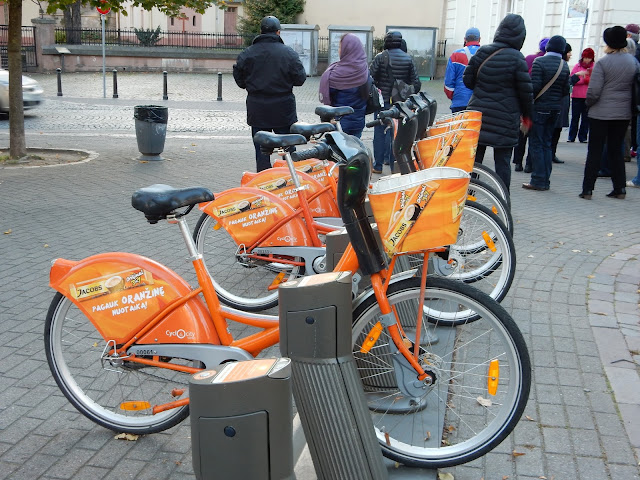 Amparo haggling prices with a street vendor whose hair matched the rental bicycles. 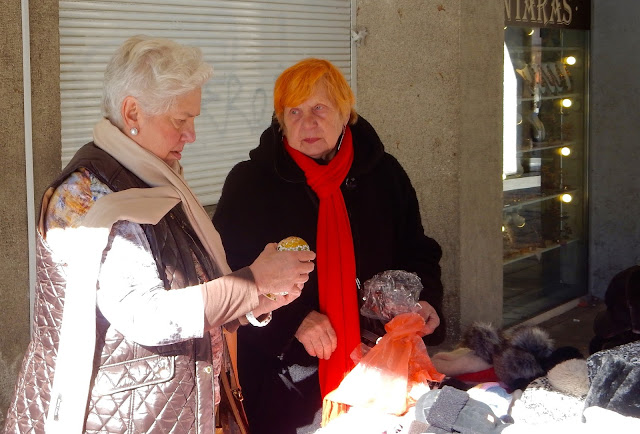 In many parts of Europe there is an old custom of young newlyweds placing a lock on a public fence and throwing away the key to symbolize their commitment to each other. The key is suppose to be thrown where it cannot be found... ever.  Fences near a deep river are the popular place for being 'locked'. 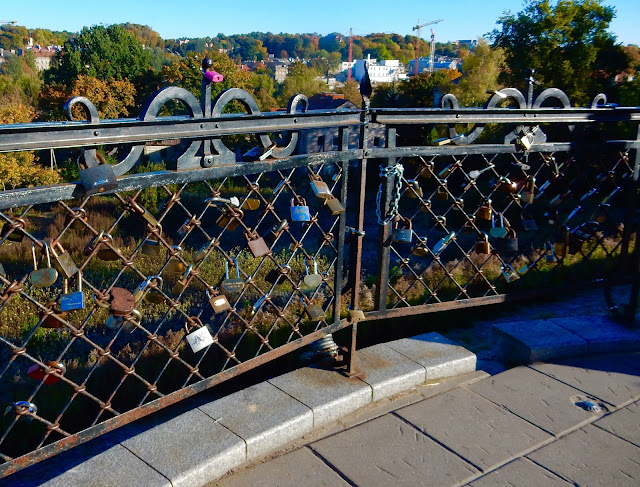 After the cold dehumanized feeling we felt in previous countries, Lithuania was such a joy to experience. The scale is small, the narrow streets interesting and the people are friendly.
Highly recommend Vilnius to all.

We drive to Warsaw tomorrow, the last country of the tour Poland.