The early morning air is crisp and invigorating. Autumn has arrived in Russia.
Today we travel out of Moscow to the Holy Trinity St. Sergius Lavra monastery where they say the Matryoshka or nesting dolls originated. The actual history of the Matryoshka dolls goes back so far in Russian culture and history, is the actual origin even known? 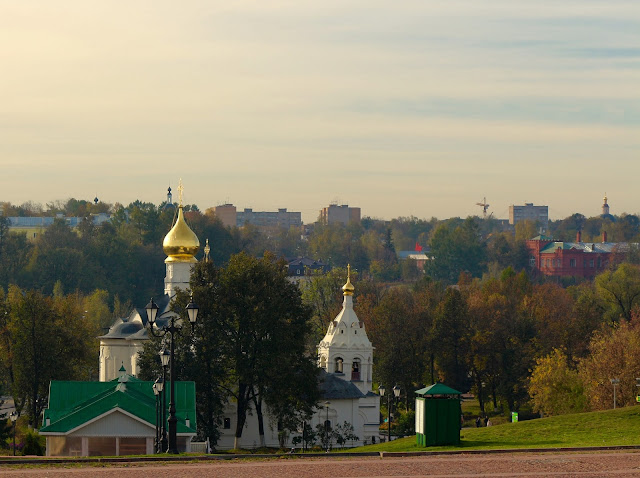 When they said monastery, in my mind thought maybe a humble ancient religious structure with thick mud walls, large wooden gates, monks free of worldly possessions and pious priests. Maybe even a vow of silence???

Not to be, was an elaborate collection of gold domed churches, chapels, fountain of youth water well, with more gold inside a fortress of thick white walls than anything we have seen yet.
Entry fee required!  In exchange was given a 'free' CD of Russian Orthodox Hymns. 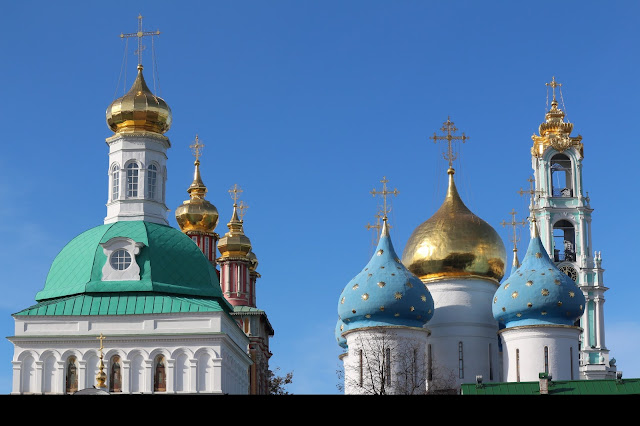 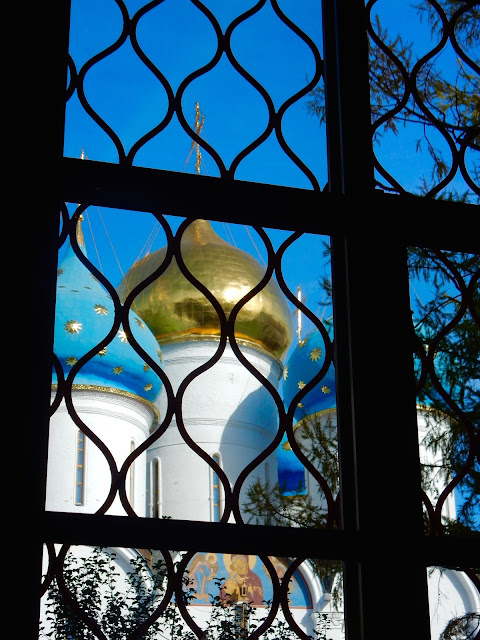 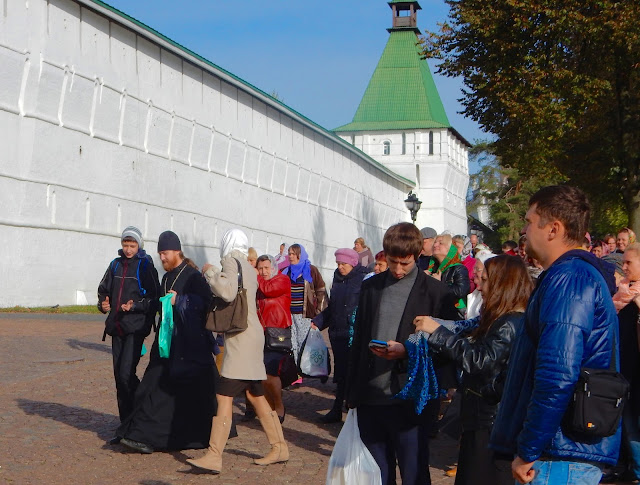 The green topped cupola in the back center covers the fountain of youth water well,  flowing healing waters where crowds line up for hours to fill their plastic bottles of the precious water. Forgot to bring your bottle? Don't worry, they will gladly sell you one.

If the line is too long, no problem. There is a lady selling pre-filled bottles in the next courtyard.

Amparo, watch out! Religion is sneaking up you. 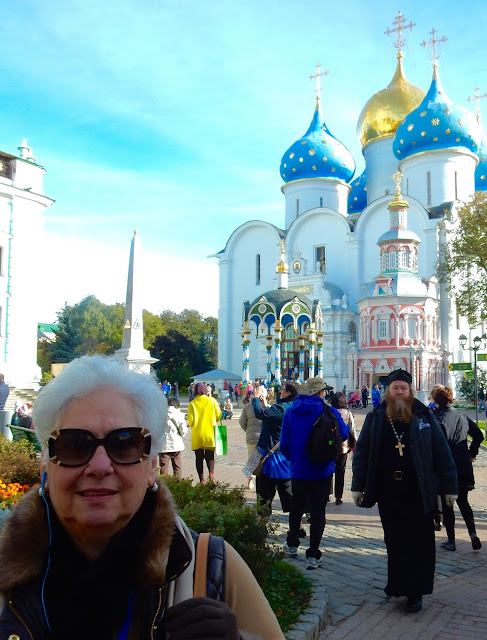 Next courtyard over, the water lady selling empty bottles and fountain of youth water.
Doesn't she look happy.

The morning was cold and no one was buying... yet. 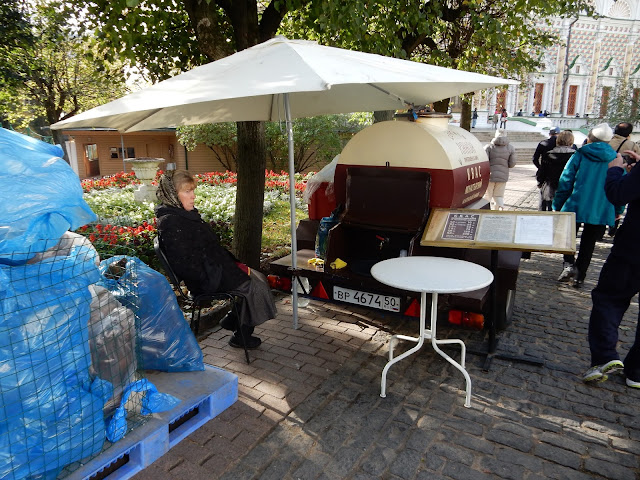 Still in prayer while leaving the cathedral. Eyes closed, does he ever trip like the Pope? 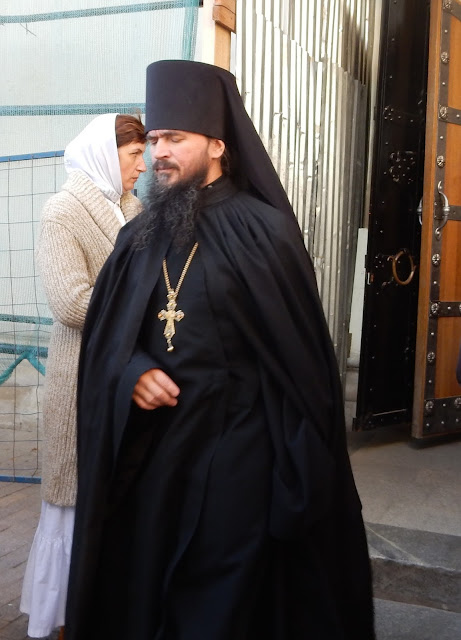 Small stall with authentic Matryoshka dolls, or nesting dolls. They are considered authentic if the craftsman who made them signs the bottom.
Many of the dolls we saw in the Moscow souvenir shops had no signature. Maybe from China? 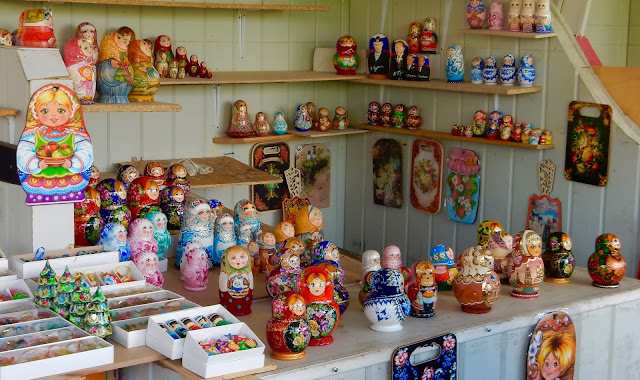 Little girl in the pink hat has her eye on that fresh roll still warm from the oven.
Another church run business inside the monastery walls. 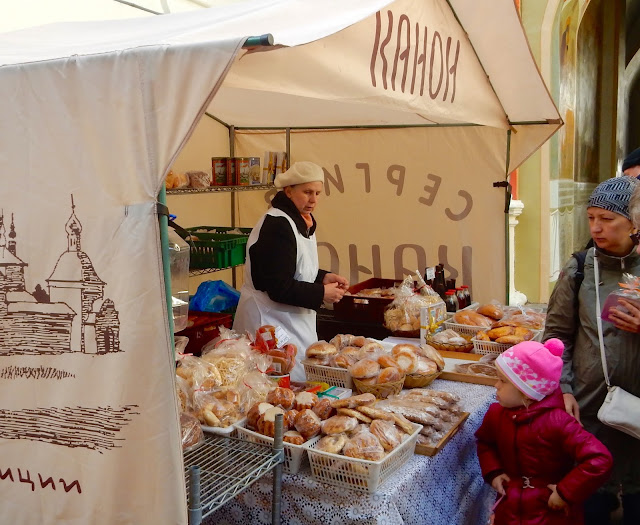 Babuska (grandmother) carding the wool before spinning it while granddaughter knits another shawl to sell, outside the walls. 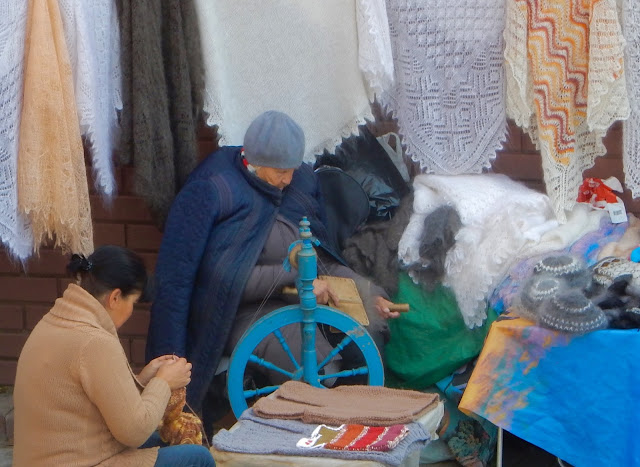 Every home we saw in the country had tall solid fences around them.  Was difficult to see the houses.
Just open your gate and sell fruit, flowers or whatever to people in the street. 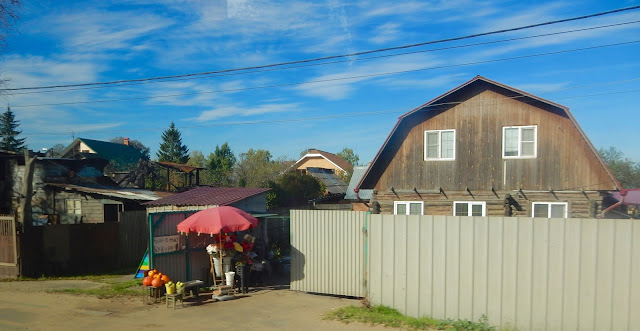 Bicycles are commonly used for purposes other than riding.
Here it's a two wheel pickup truck hauling lumber. 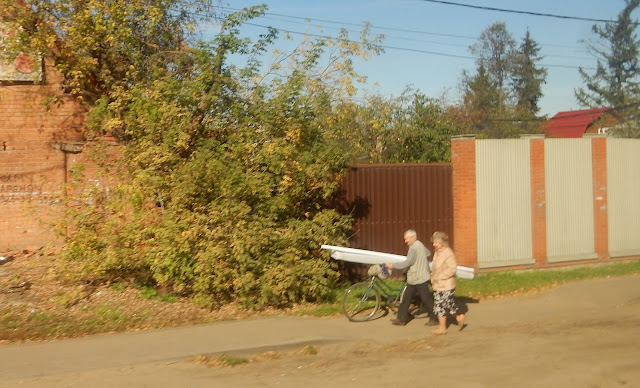 Or for decoration in the GUM department store with plastic fall flowers. 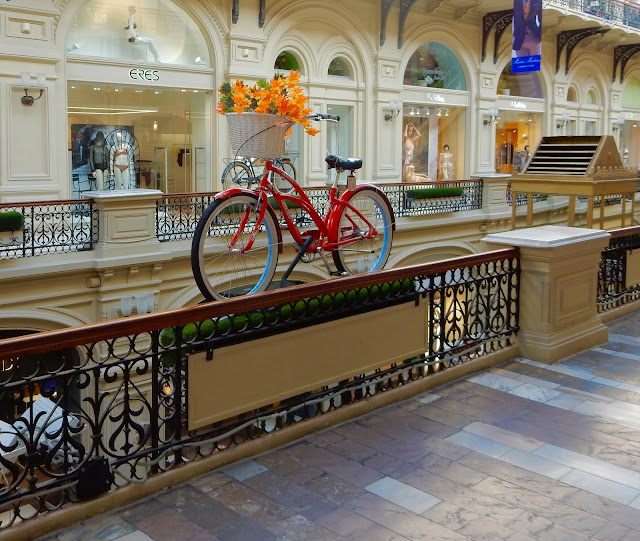 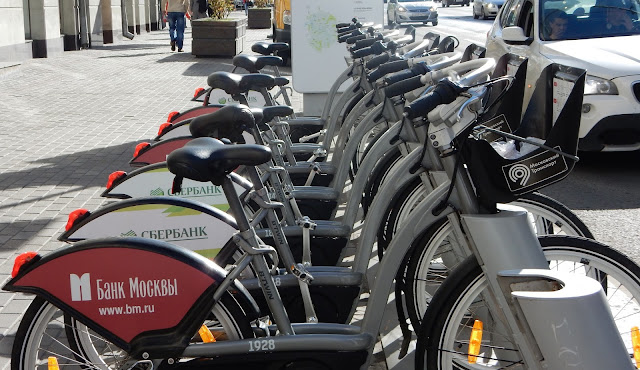 Outside the Red Square were many souvenir stands offering typical Russian hats from soft warm fur to cold steel helmets and the Matryoshka dolls...  unsigned. 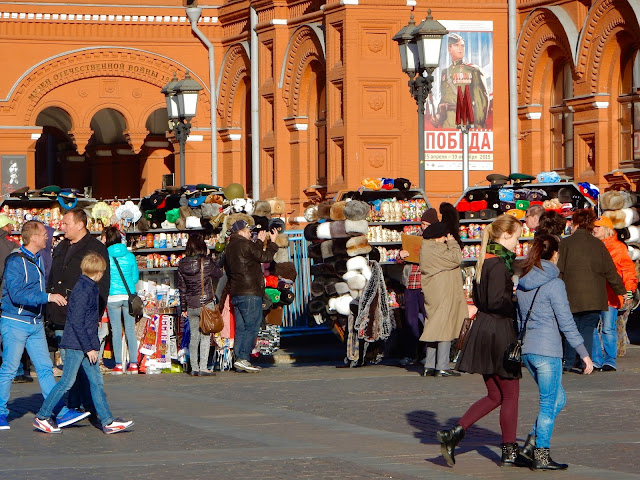 Young Russian family looking for Lenin's Tomb behind me.

If you’re russian you’ll pass right by it
and if you’re stalin you’ll never get there,
but if you’re Putin enough effort
you’ll see it in the end. 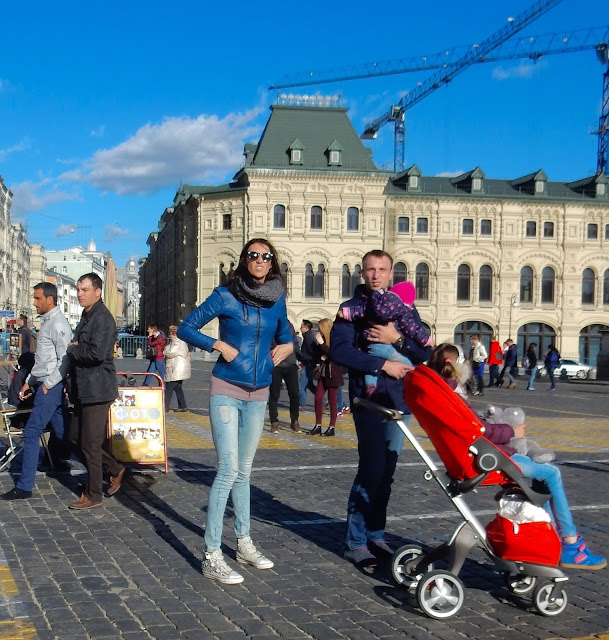 Cossacks are still in Russia. Now working as greeters at the 'authentic' restaurant
and posing for photos with tourists for a few rubles. 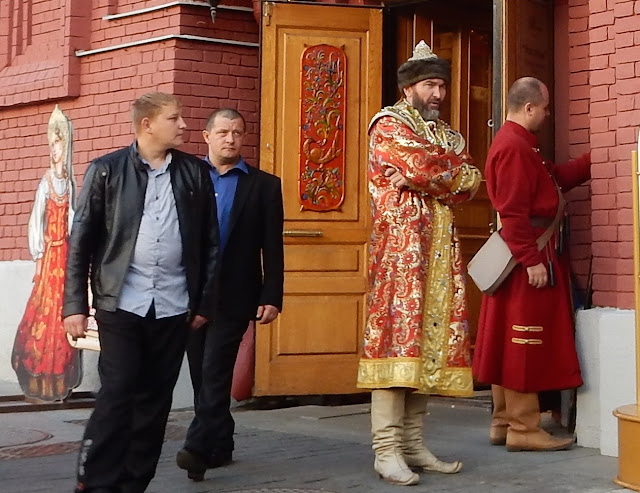 Fashionable blonde teaching her son to ride his first bicycle on the Red Square cobblestones.
Amparo noted that most of the women we saw were very fashion conscious. 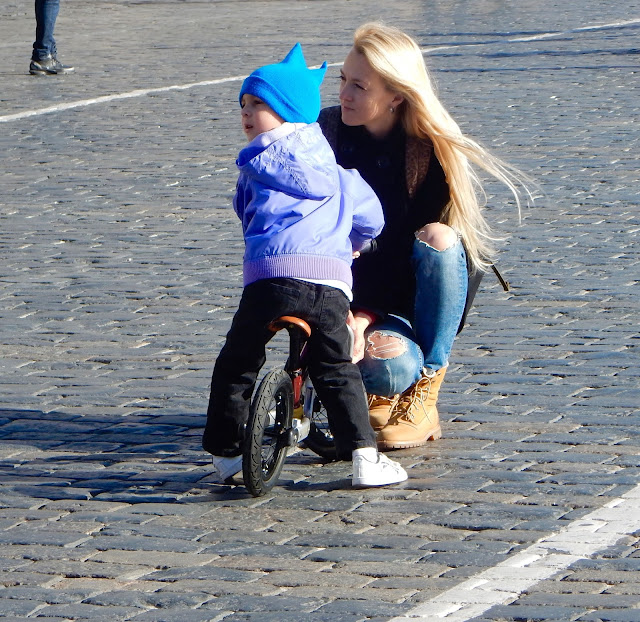 Interestingly I spotted this painter working in the dark the night before.
I wondered how can he see to paint in the dark?

The next morning I see him still up there painting, on the same  spot ,on the same building,  second floor. Maybe those ear phones are not for music but is a KGB listening device????????? 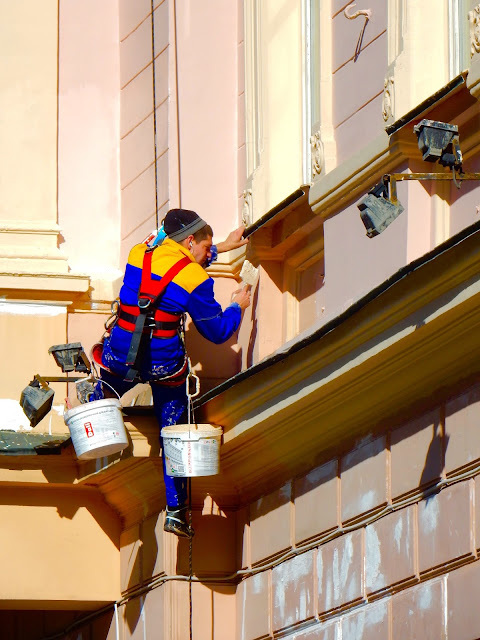 Restng in the shadow of a big gun. 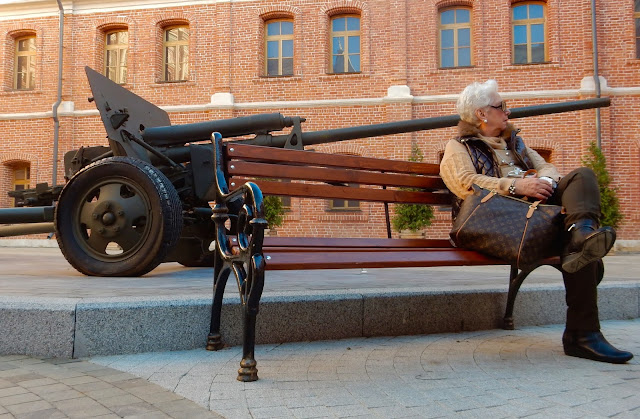 Meeting the BIGGEST GUN in Russia,  Putin!
or is it a Putin lookalike? Are you Putin me on?

Says he LOVES Colombians, but Americans? Not so much. What a diplomat. 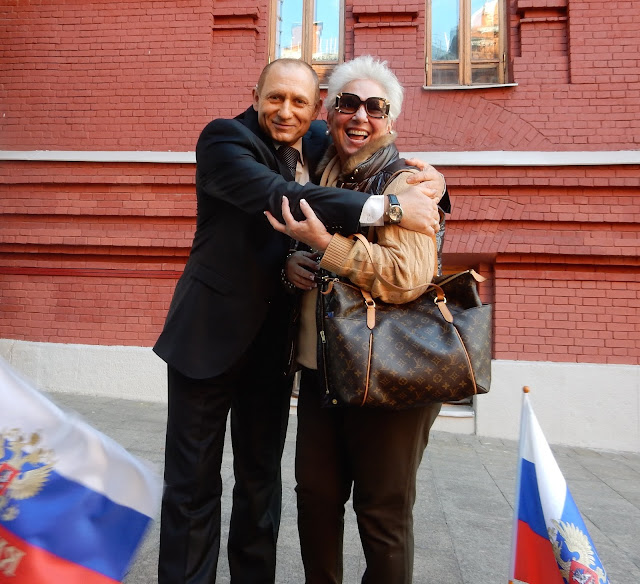 This was the biggest smile I could coax from this cutie. 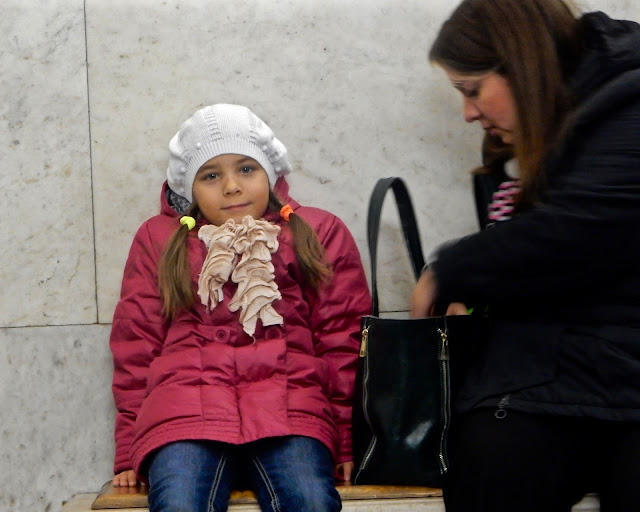 We really are in Red Square, MOSCOW!!!
Never thought a Colombian small town girl and an Ohio small town boy would be here!
Pinch us both!  Another major highlight,  a RED letter day. 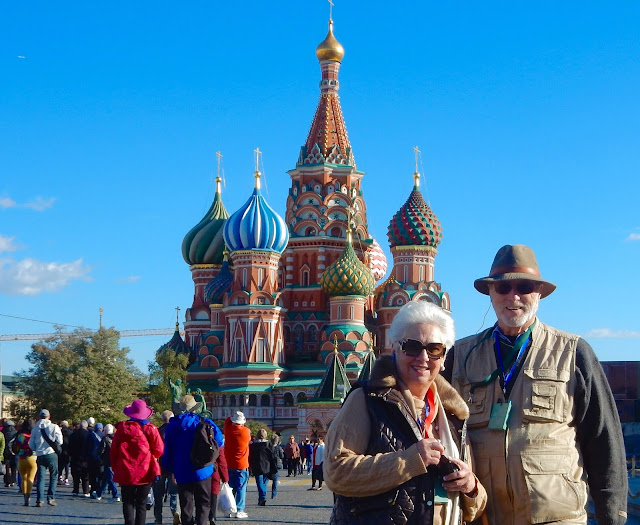 Could this be the Russian version of Rock, Scissors, Pigeon.  Pigeon wins.
Socialists get no respect, alive or dead! 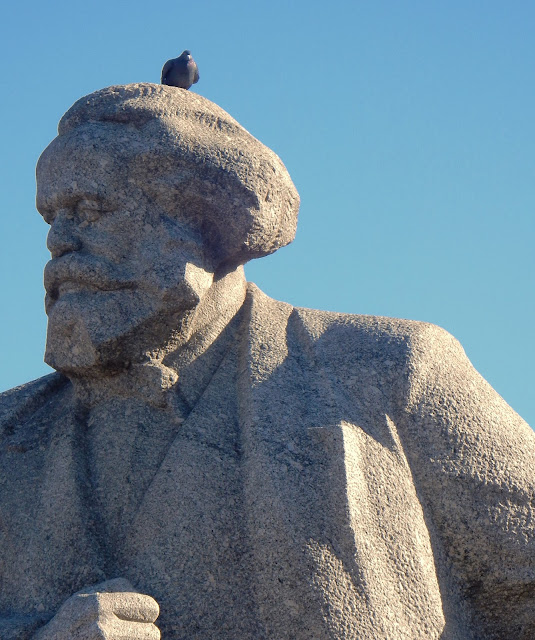 Early morning in the hotel, Amparo is ready for a new day, but first breakfast.
Doesn't she looks well rested and fresh? Must be the shots. 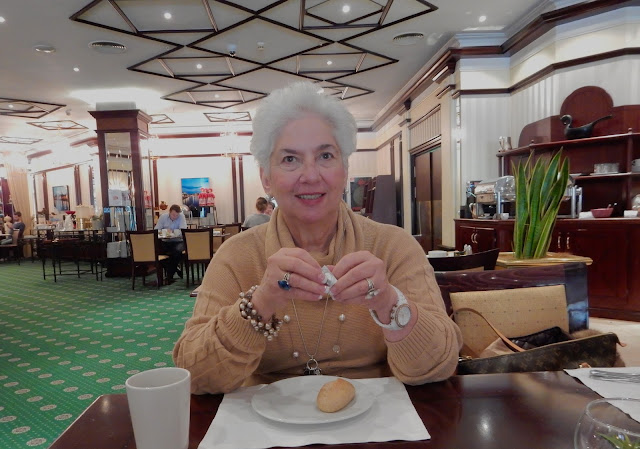 Typical all over Europe, breakfast is an offering of a large selection of luncheon meats, cheeses and pastries. Coffee so strong, even watered down I couldn't drink it. Stuck with the fresh fruit juices. 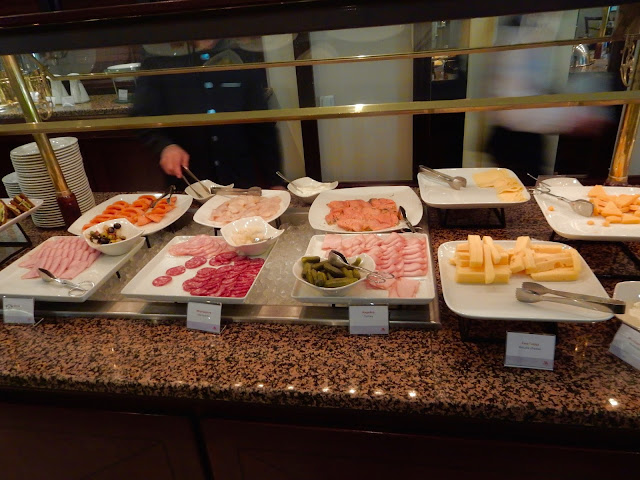 Russian desserts are another matter. Not sure I want to eat anything so fancy.
Like their "wedding cake" buildings, better to be admired from a distance than...

The card say "Cake of the Day"....a baked fruit tort with a fancy sugar veil? 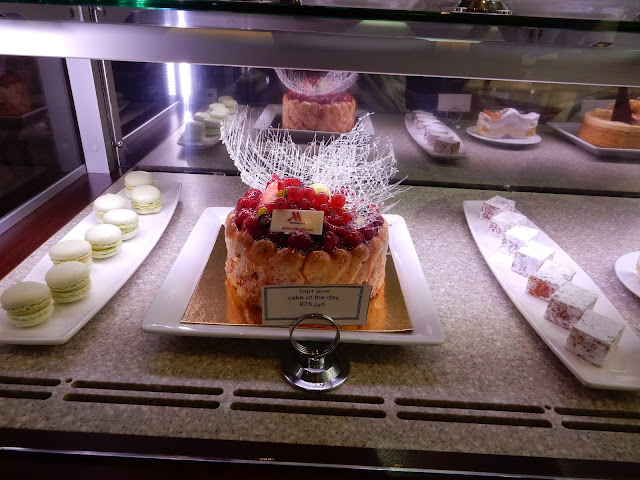 Country wildflowers losing the struggle against the cold October nights.
Our time to leave Moscow is fast approaching. 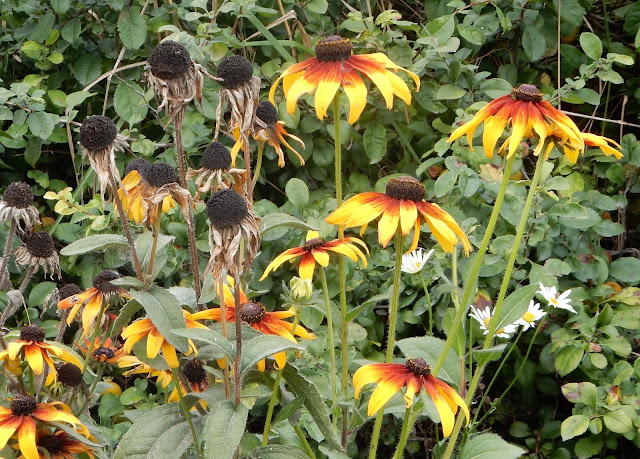 Even a simple walkway can be attractive when created by someone with a good eye. 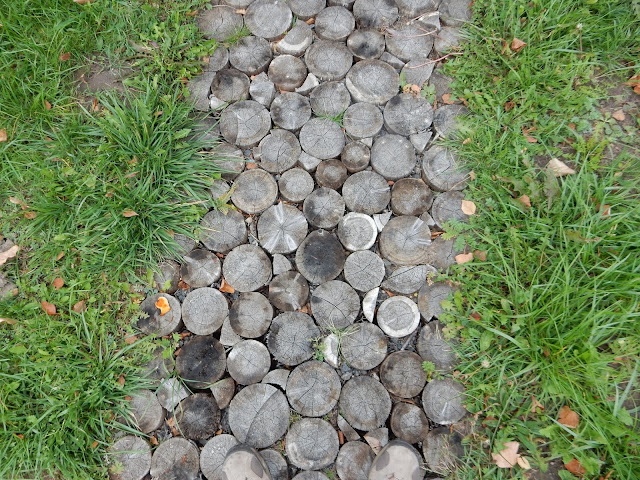 Remember the movie "Red October" about a Russian nuclear attack submarine captain who wishes to defect to the West?  We found out Red October is actually the name of the most famous chocolate candy company in all of Russia.

Our time in Moscow is over, on to Minsk in the morning.