Our travel companions tell us the overnight ferry from Stockholm to Helsinki had many forms of entertainment, duty-free shopping, etc. but we were so exhausted we stayed in our cabin and slept the whole ride.  No casinos, no karaoke, no shopping, no drinking binges...
The flu bug we caught on the flight over to Berlin is gaining the upper hand.

Finland is the most technologically advanced country in Europe as well as the northern most outpost of the European Union. NOKIA, the mobile phone giant, calls Finland home. We have been impressed with the fast internet service everywhere.

Entering the Helsinki harbor was a bit unnerving. Looking out the water smeared port hole, huge boulders are close enough to reach out and touch, or so it seems. Has to be a steep deep channel.


Helsinki, with a population of only 600,000 is a small big city. Being coastal at the northern end of the Baltic Sea, it's windy and cool most of the time. Unless you're sitting under a direct sun. then it warms up a bit. Otherwise, dress warm and turn your watch ahead one hour, time zone change. 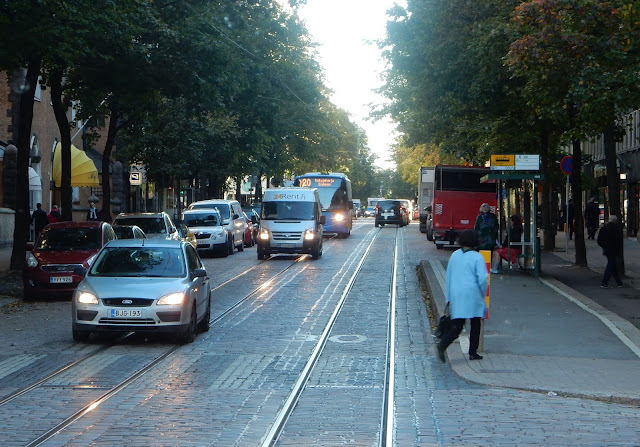 Love to see these electric non-polluting trams in the cities.
Though the overhead wires are slicing through every photo I try to take
of the green domed Lutheran Cathedral in the background. 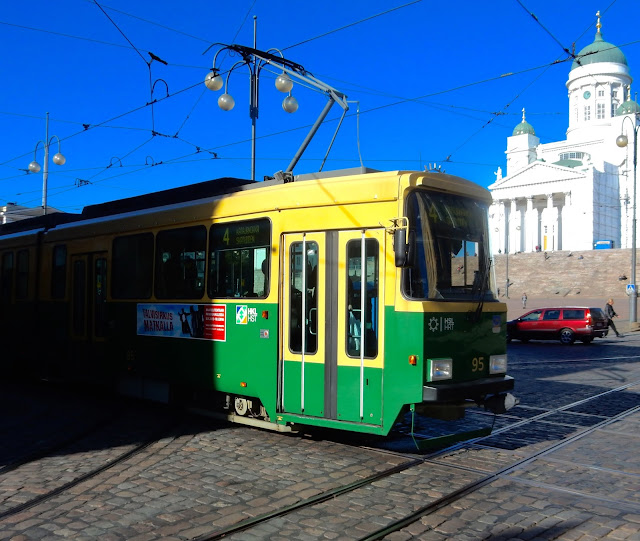 The Finns too love their bicycles. Young lady smartly dressed for work and cool weather. 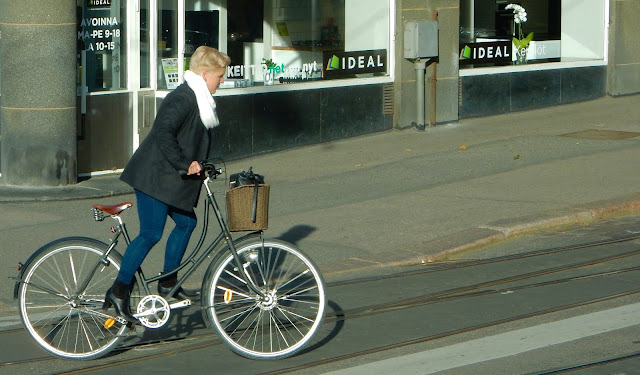 Eila Hiltunen, a Finnish sculptress, was commissioned to create a piece entitled " Love of Music"
to honor Finland's great composer, Jean Sibelius.
The challenge was to create a visual presence of what music sounds like.
In a city park, stands her interpretation for that challenge.

A tight forest of six hundred stainless steel pipes floating over a huge rock
amongst a forest of evergreen trees. It makes no sound.
It's music for the eyes.

Music critics were so opinionated, the sculptress was obligated to add a bust of Sibelius
nearby so everyone would know what it was about. 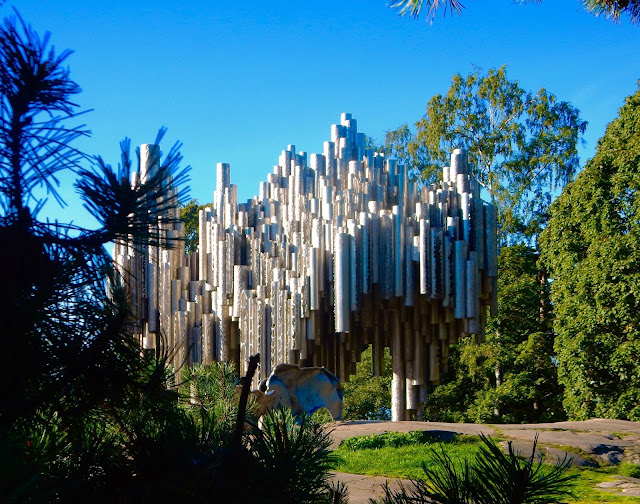 There are many big and even bigger rocks under and above ground in Helsinki. In the middle of downtown, was a particularly large granite boulder that until 1969 they could not decide what to do with it. Two architect brothers developed a plan to blast a hole in the center of the boulder to create Temppeliaukio Church, also known as Church in the Rock. Now a favorite tourist attraction.

The modern main entrance was boring but I thought this service entrance had an interesting character with eight different textural elements. 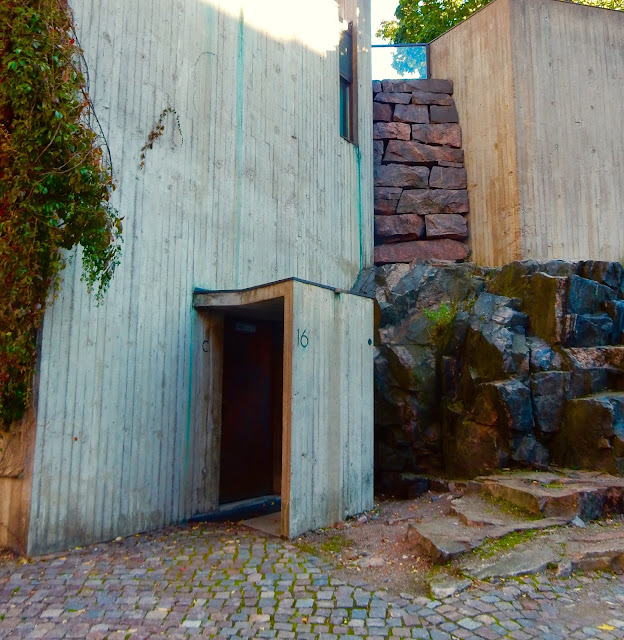 Berry season is in full bloom in Finland. Market Square on the waterfront in front of the Presidential Palace was open today for a farmer's market.  The fresh ripe fruit was looking so delicious, just couldn't figure out how to stuff red and black berries in the pockets of my white shirt without permanent stains. Only buy what you can carry in your hands. 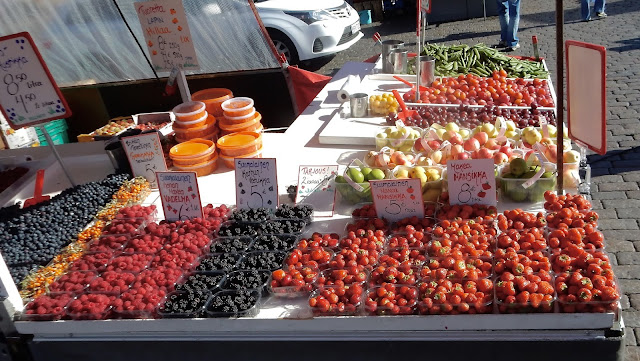 As in all countries surrounding the Baltic Sea, seafood is a main staple, and inexpensive too.
The hot salmon soup with homemade bread was tasty. One has their choice of sitting in the sun soaking up rays or in the cool shade out of the wind.
Tonight this food stand will be torn down and re-erected again tomorrow, in order to comply with the "No permanent structures" ordinance. 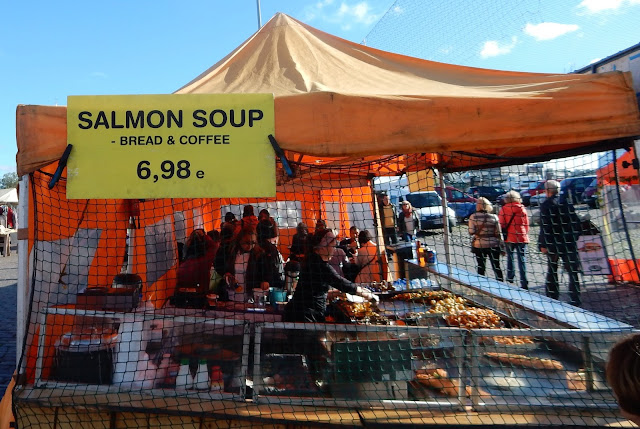 Unless they are enjoying shots of Blueberry Vodka as did Amparo and Anna our Russian guide,
we saw few Finnish smiles.. 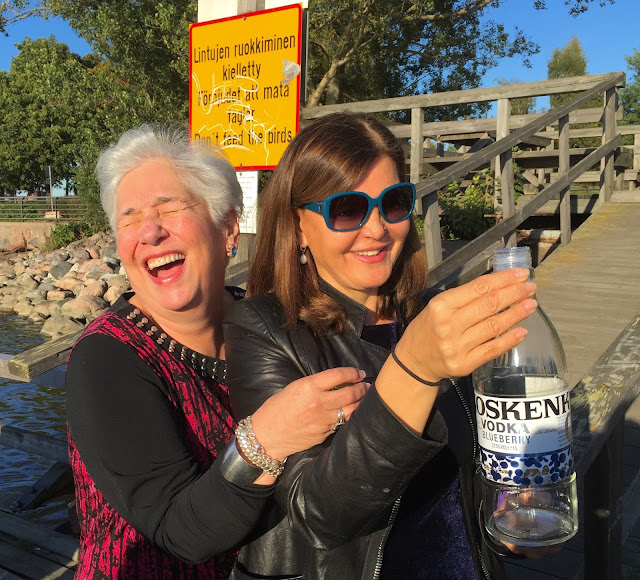 Wandering a small island near downtown, spied a country lane leading to a farmer's simple produce stand and home. Interesting how he built his fence. 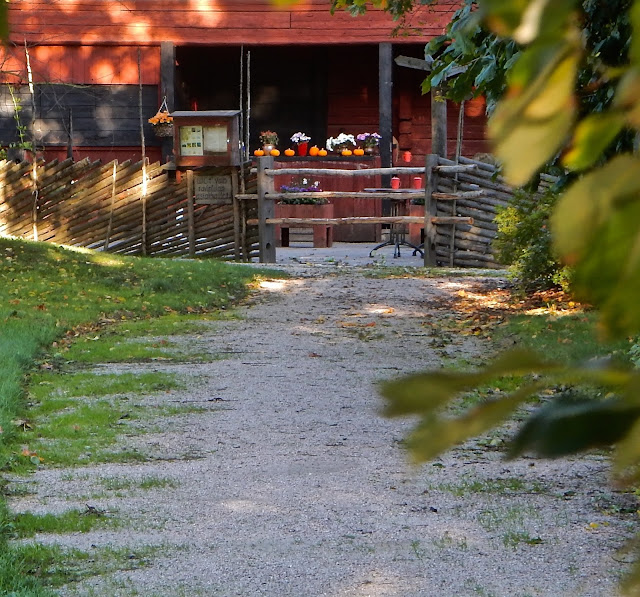 On a back water lagoon, a solitary Finnish duck keeps a wary eye
on the stranger with his camera. 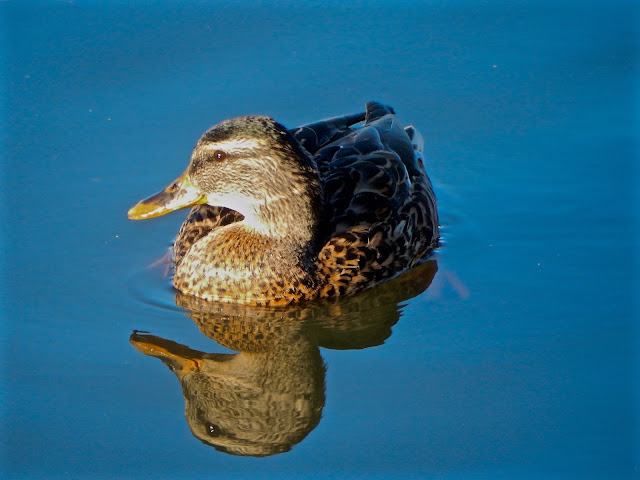 Russian food is big in Finland, where they take great pride in preparing the most authentic traditional Russian meals. Of course, the meal would not be complete without Russian tea. 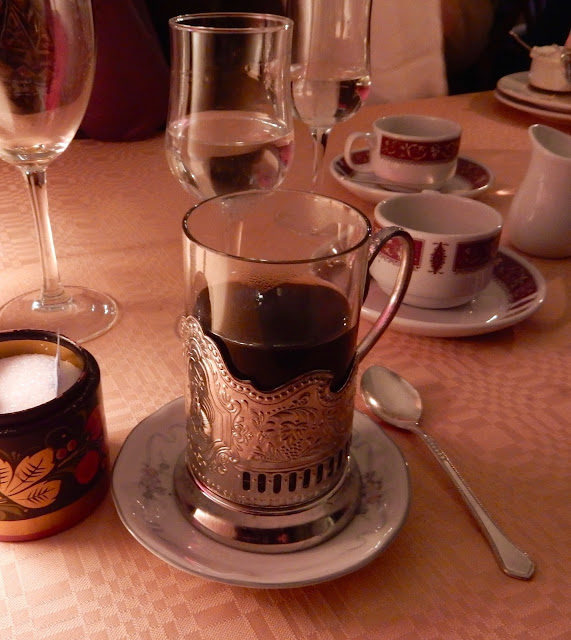 A traditional Russian samovar is used for heating the water. 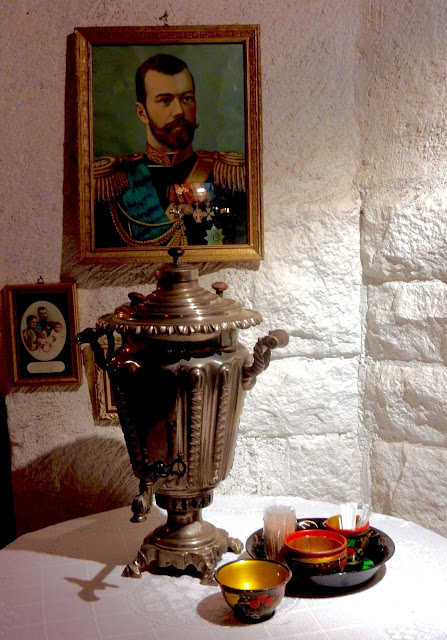 but only after having a large portion of borsch (or borsht) with dollops of smetana (sour cream). 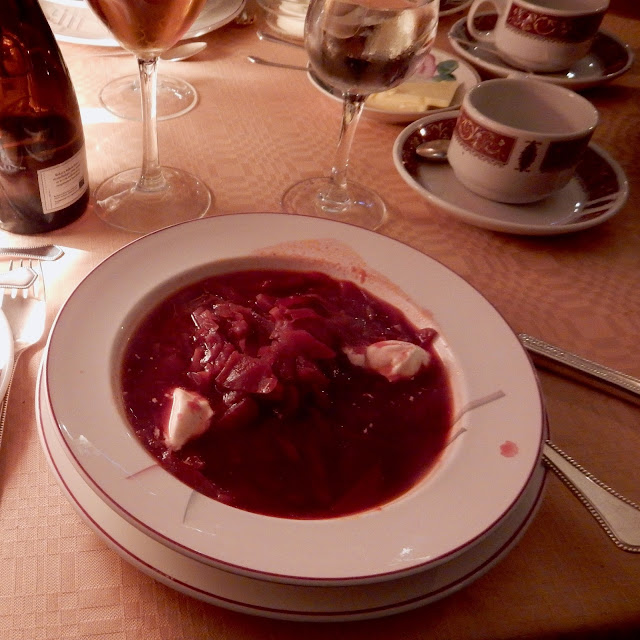 Next morning it's back on the road, next stop St Petersburg. 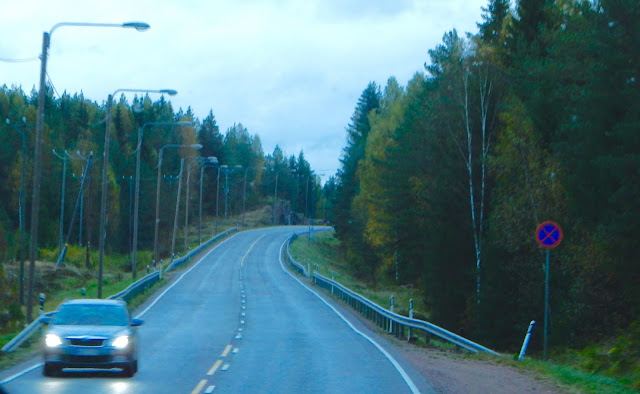 But first the Russian border for a long wait. Maybe someone will show up and stamp our passports, maybe not. Our group was the first to arrive mid-morning, yet no one was working the other side of the immigration booth. 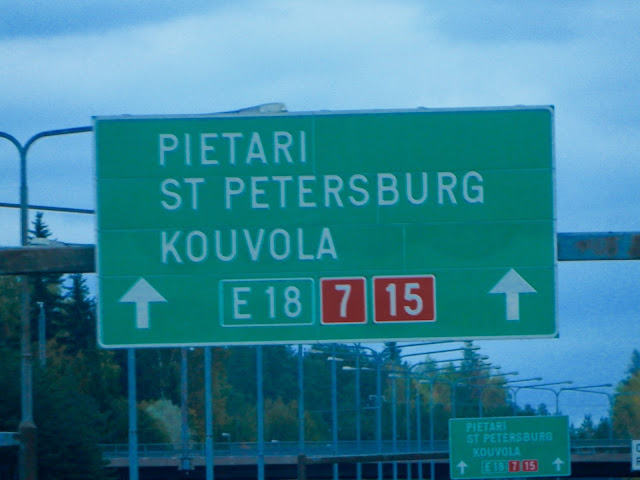 A typical non-smiling bureaucrat unenthusiastically opens her booth and slowly reviews each person's passport, their visa,  then studies their face.
Should I smile, frown or clown?
Better play it straight, we spent 60 days and paid US$350 each for a Russian VISA,
don't want to screw it up now.

At last we're in Russia. Now to exchange Euros for Rubles, so I can buy a diet Coke.