Crossing over the border from Russia into Belarus (after paying a US$73 VISA Fee to Belarus), noticed that the farms were not overgrown with weeds like they were in Russia. Did not actually see anyone working but the land is being tilled.

The guide told us Belarus is still run by a socialist President who believes in communal farms. When I asked about the lack of active farming in Russia, the answer was...  the land there wasn't very good.  Hmmm, more government BS.

What difference does a border make? Fallow ground becomes fertile by crossing a political line?
Not likely! Will keep pressing the question... 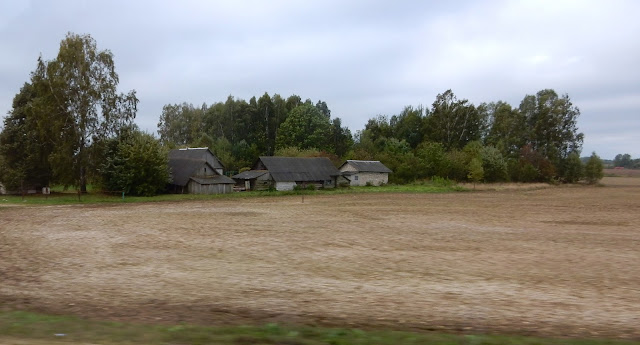 Though we have read and heard about Minsk many times in history, had no idea what to expect.
We were very disappointed.

Arriving in Minsk, the capital of Belarus, we see huge red and green signs and billboards everywhere. All promoting October 11th as the national election day. Since voting is mandatory of all citizens, a big turn-out is expected.  Although, everyone seems to already knows who will win... again, the current supreme ruler President Alexander Lukashenko. Who has won every election for the last twenty plus years. No term limits here...

Afterwards I read that 87% of the population voted to reelect Lukashenko.
Another article stated 85% of the population turned out to vote.
Hmmmm... Guess he is so popular some voters were moved
to give him an extra vote of confidence. 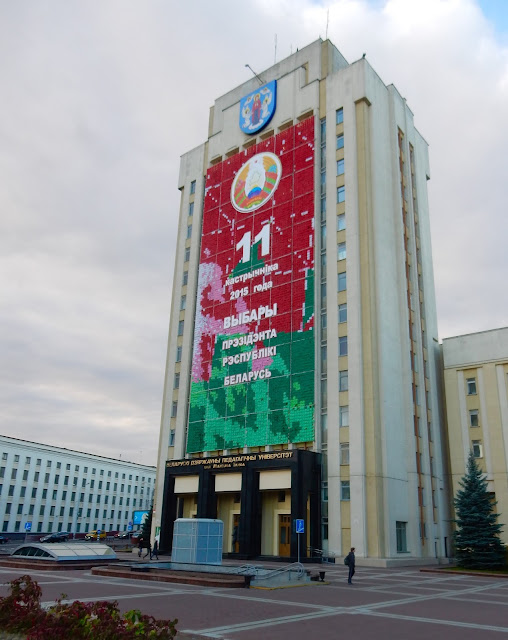 Central government buildings here are cold, impersonal, uninspired monoliths.
Maybe they should leave the election posters up to hide the boring facade, at least it would give a festive christmas feeling with the bold red and green.

Eight thirty in the morning, a huge empty plaza in front of a huge government building. Where are all the people? Anybody....? 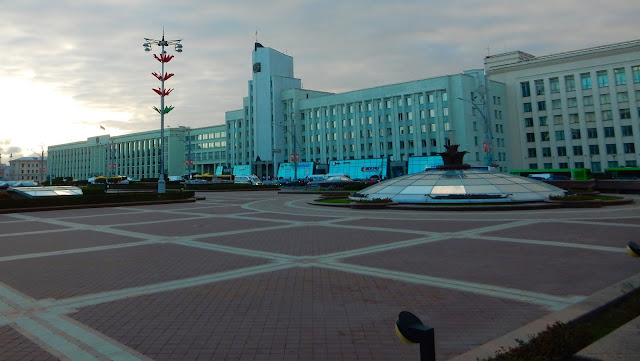 Amparo poses in front of another hero statue in an empty plaza.
Do their architects only have square and rectangular models to work with? To go from the overly ornate 'wedding cake' buildings of Moscow to the stark LegoLand looking buildings of Minsk is a huge shift in architectural philosophy for two countries that were both part of the Soviet Union at one time. 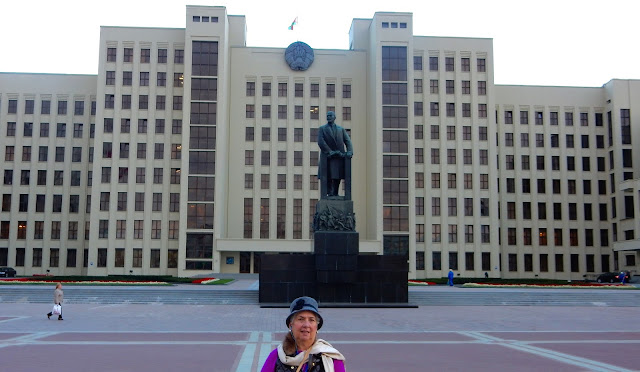 Another over the top monument to... something. Clean, neat, manicured landscaping,
but void of any people. 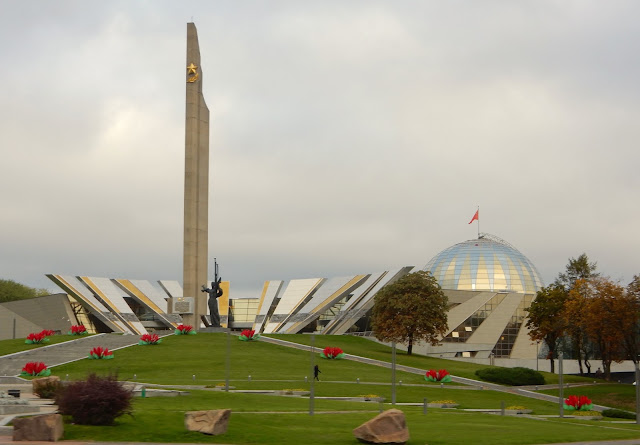 Bold city park entry gate for at least one person. No families, no strollers, no joggers. 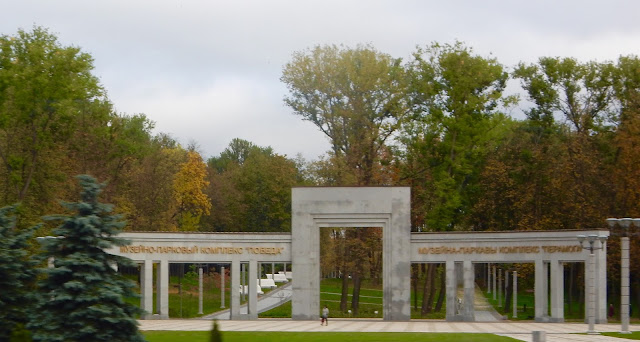 Finally found some people outdoors in Minsk, a grounds crew.
In the early morning chill,  mowing and cleaning to keep the plaza spotless.

Belarusian delivery trucks on a clean streets  Orderly drivers, no loud horns, no racing or swerving from one lane to another. Not many people out either... perhaps all home studying the candidate slate, deciding for whom to vote? 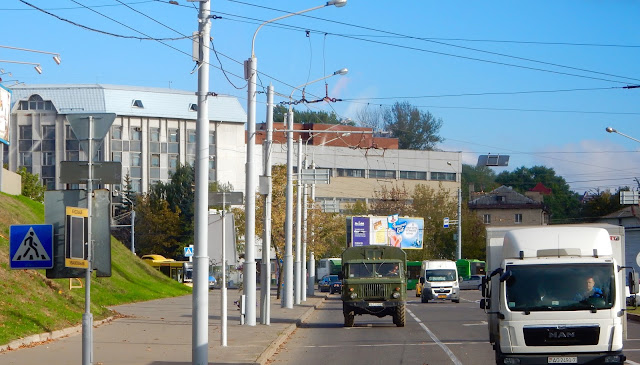 The only thing in Minsk that stopped me in my tracks, made my jaw drop,
this brass plaque above the entrance to the Roman Catholic church.
Founded in 1067. 1067..... think about it.

Nine hundred and forty-eight years ago...
To Americans anything over a hundred years old is an antique,
over two hundred years is ancient, over five hundred is prehistoric. 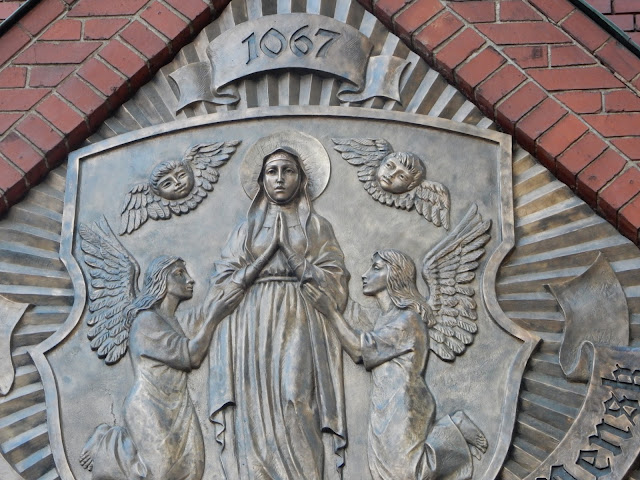 The oldest Roman Catholic Church in Minsk has a slaying of a dragon statue rather than a crucifix out front. The friendly Priest personally came out to welcome us inside.

Our local guide said the Russian Orthodox Churches discourage visitors and could not get us into one?  Hmm, the Russian Orthodox Priests at the monastery in Russia didn't seems to mind visitors,
or was it because they charged us to come in and buy bottles of fountain of youth water? 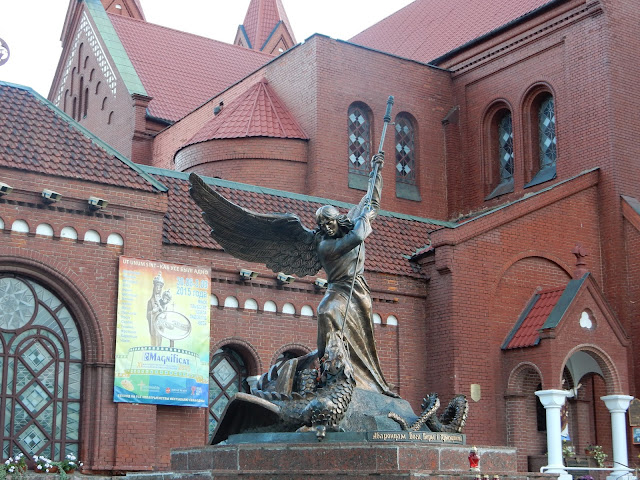 Our hotel was of a Picasso inspired architectural design. Which made it stand out in stark contrast to the government's simplified geometric shapes.

The hotel may be one of a kind, but we hated our room.
There were huge spotlights outside our window to illuminate the building exterior at night,
which also illuminated our room all night.  We wore sleep masks. 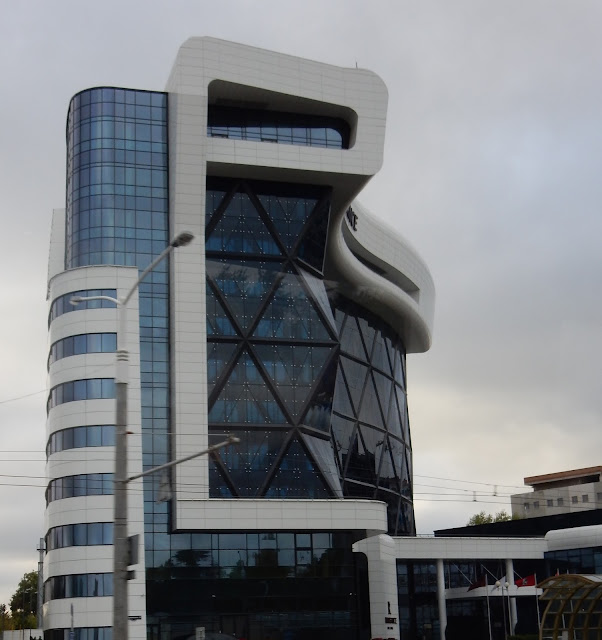 Like the hotel structure itself, its desserts were over the top is design.
Overly elaborate on the outside but lacking substance or flavor on the inside.
Maybe pleasing to the eye but hard to stomach.  I know, this one I ate.

It's like socialism. Looks good, even appetizing. But really depressing
when you actually have to swallow it. 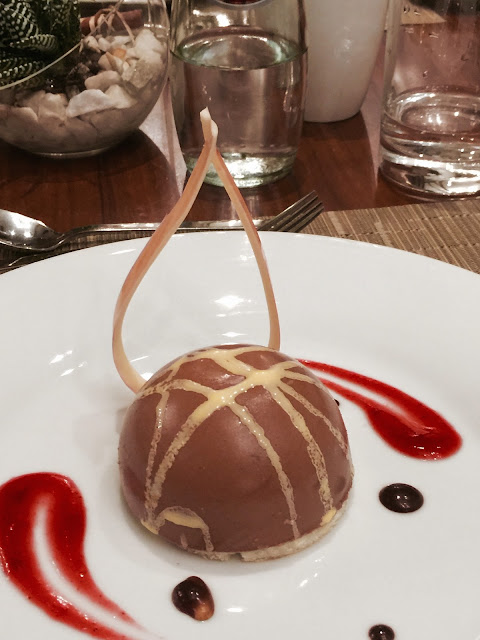 Minsk is very clean, organized yet strangely lacking of people.
Oddly disappointing and sad. The least inspiring country we have been in so far.

The only smile we received was from the Roman Catholic priest.

Next up, tomorrow we drive to Vilnus, Lithuania.