There was so much to see and do in Moscow, decided to split it into two sections:
Part 1: Moscow - Structures and Statues
Part 2: Moscow -  People, Puns and Putin

Moscow is everything you ever read, saw or imagined it would be;
Larger than life "heroic" statues,
Huge Edifices,
Wide Boulevards,
Colorful Ornate Churches
Red Square

While the city seems to have an over abundance of statues, here are the ones that caught our attention.  Celebrating the heroic common worker... 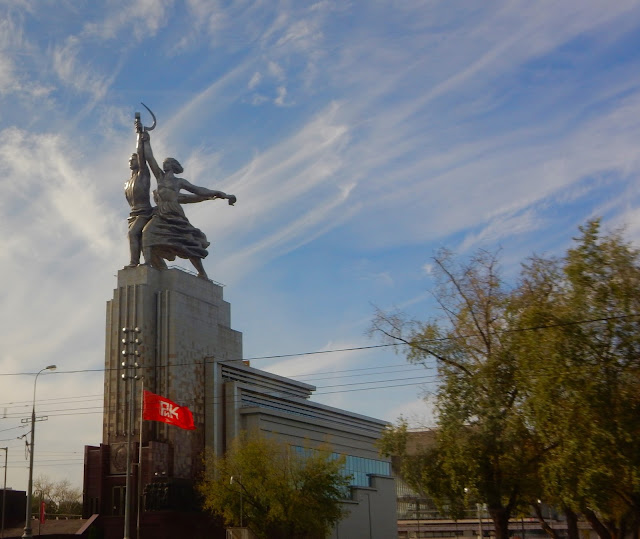 Honoring the first Cosmonaut Yuri Gagarin
the world's first astronaut,. The year? 1961.
He was killed in 1969 flying a MiG-15 trainer jet. 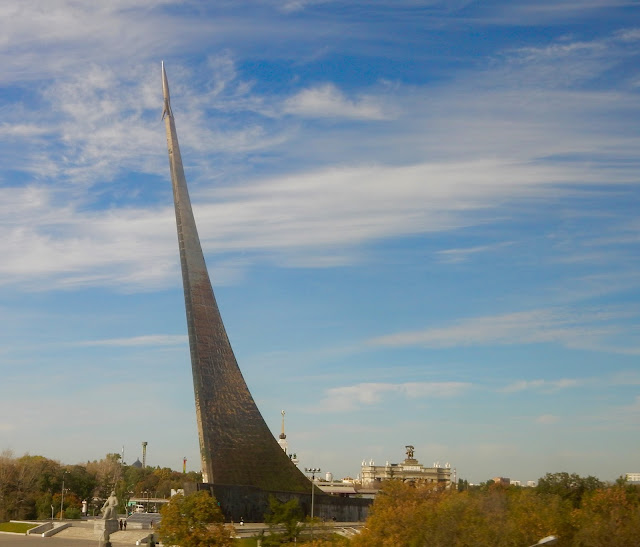 Celebrating it's war heroes... both World War II Field Marshall Zhukov...
in front of the state historical museum.
Since all four of the horse's hoofs are touching the ground,
this signifies Zhukov did not die in battle, but later in life. 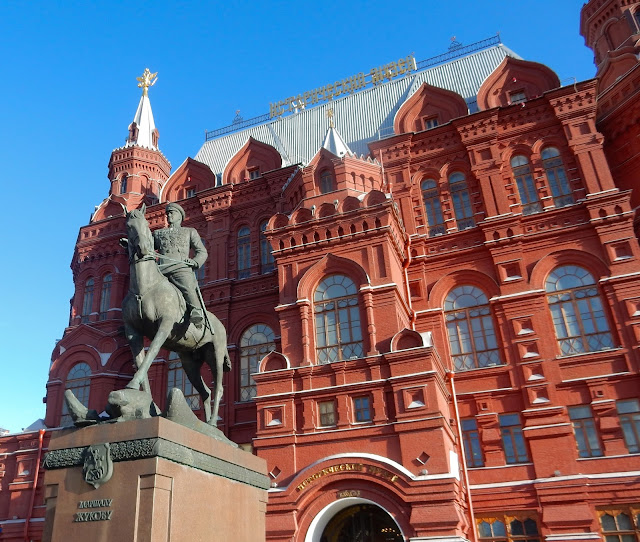 and citizen soldiers with a simple roadside monument... 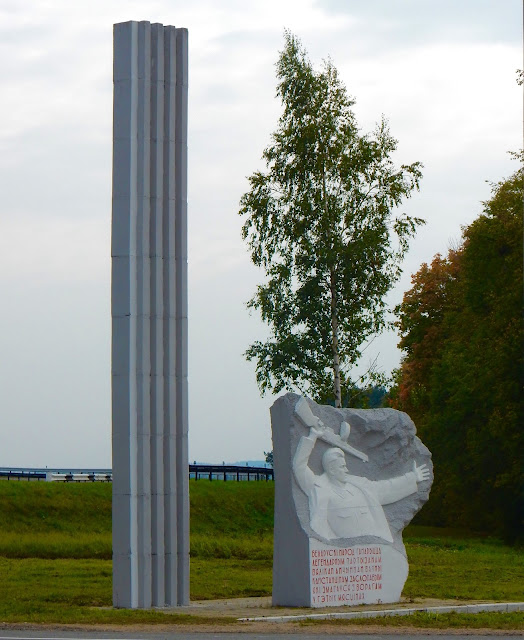 and of course that old guy with a beard, Uncle Karl, with his manifesto in hand. 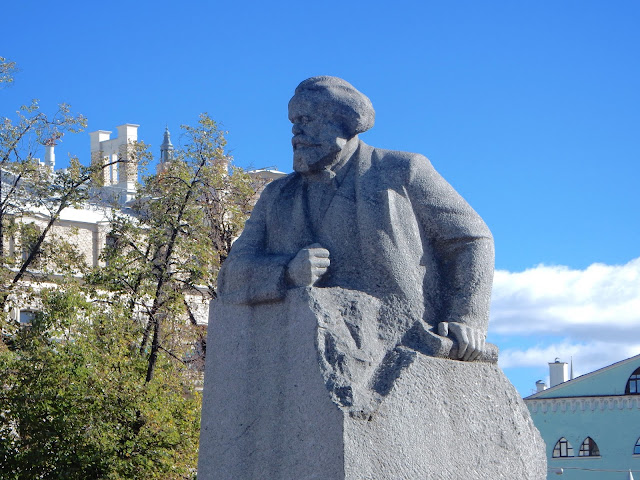 Moscow is proud of its 'wedding cake' buildings surrounding the city center. All from the Stalin era. 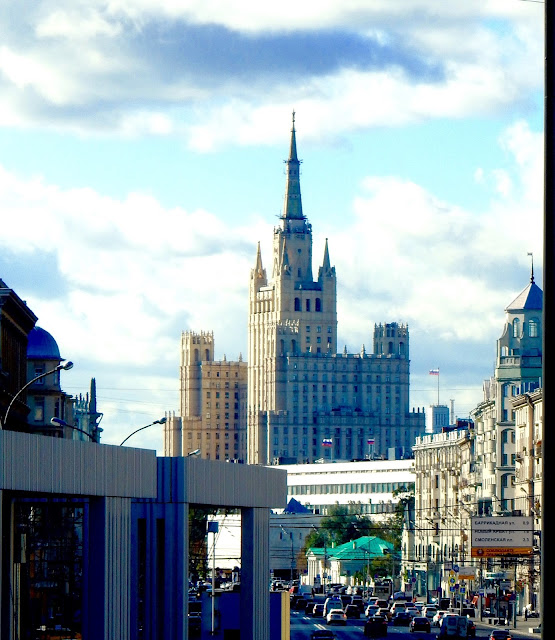 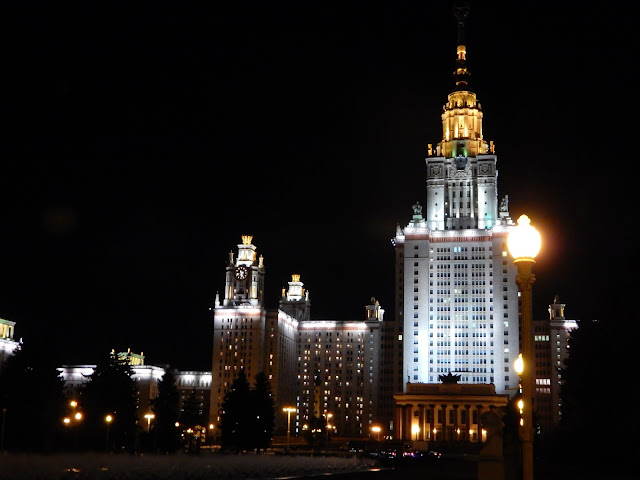 In the country side they also get into the fashionable gingerbread decorations. 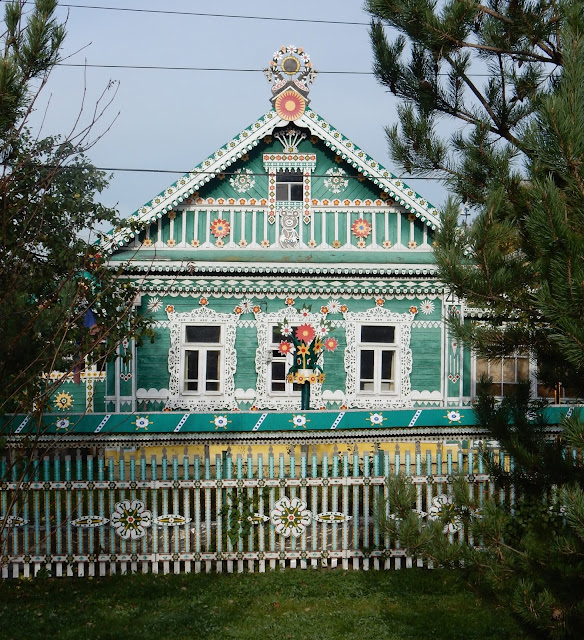 Church of the Transfiguration in the Novodevichiy Convent
with its five small golden domes and intricately painted exterior. 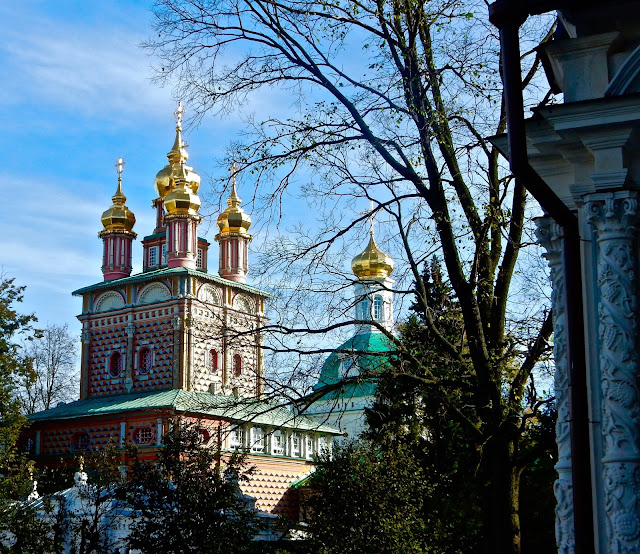 Even the modest non-golden churches are highly decorated.
For a country that tried to ban religion, churches are not shy about being noticed. 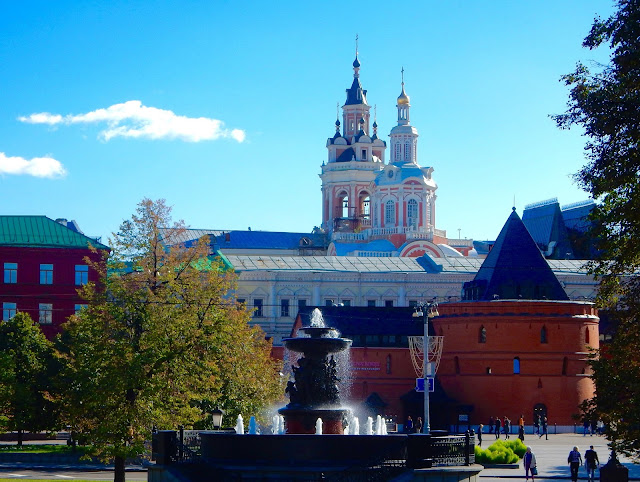 New buildings are made to look larger than life.
This one occupying a whole city block is still under construction. 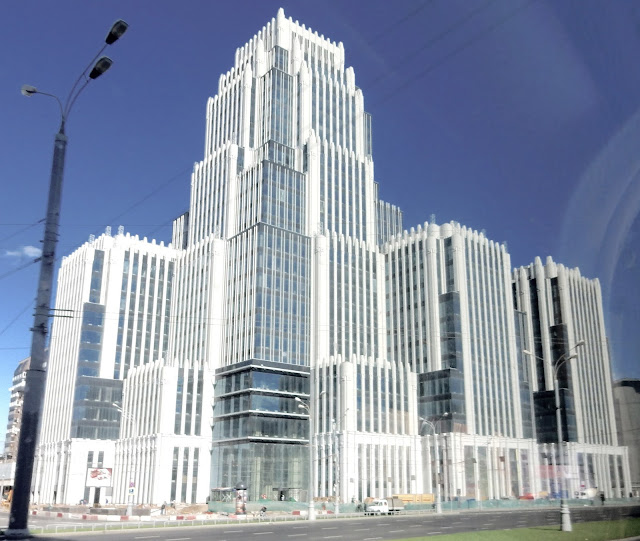 But look how out of scale it is compared to its neighbor on the right,
a normal building designed for human occupancy.
The new one looks like it will be occupied by people twelve feet tall.
The vehicles in the street look like Hot Wheels toys. 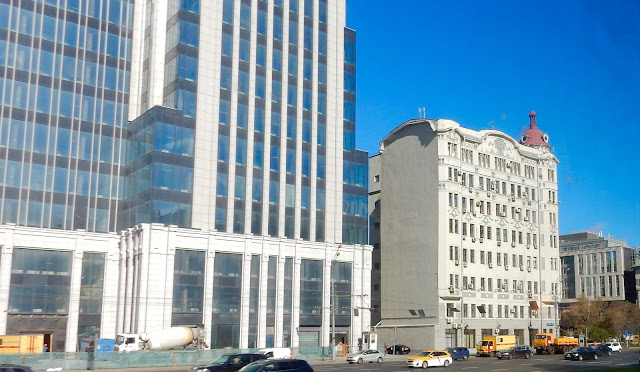 Typical Russian inferiority complex, boasting that everything is bigger and better than the West.
Our guide explained how growing up in Russia, all she ever heard was how much better off they were than the West. The long lines they had to stand in to buy bread was better than no bread in the West. It wasn't until she actually traveled abroad did she recognize all the falsehoods they had been taught.
She now lives in Germany.

A modern apartment building on the outskirts of the city is built to human scale, if not tightly packed. 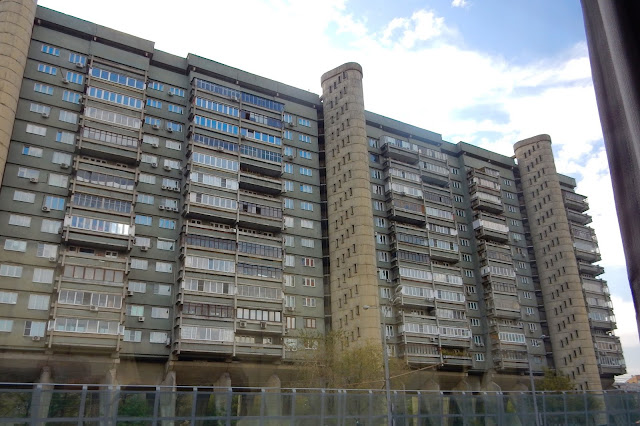 While apartments in the city center are of Stalinist era architecture.


In 1955, Nikita Khrushchev condemned the excesses of the past and actually disbanded the Soviet Academy of Architecture. Even he was tired of the froufrou buildings. 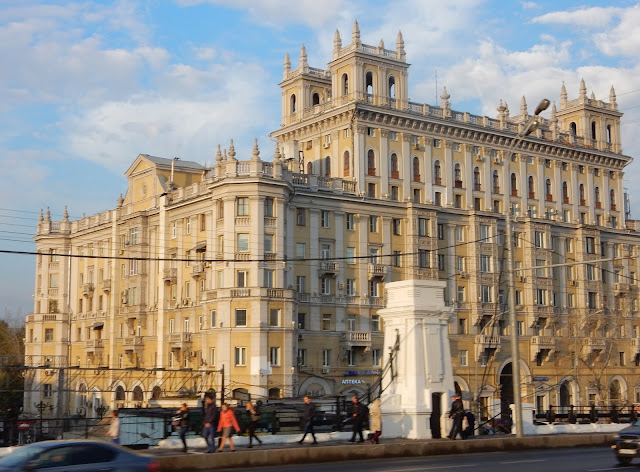 Built near the end of the 1800's, the infamous GUM Department Store overlooking Red Square. 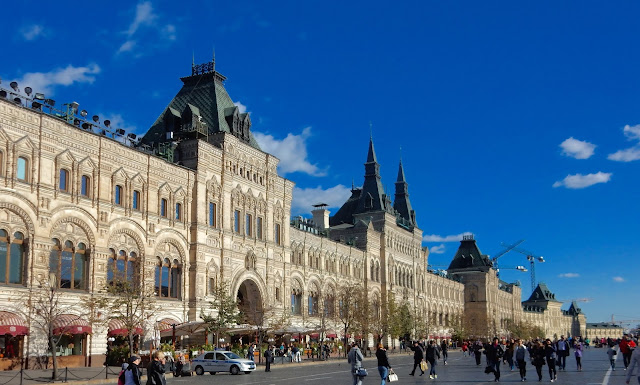 GUM is not really a department store in our sense of the word,
it is actually a shopping mall with many different individual stores. 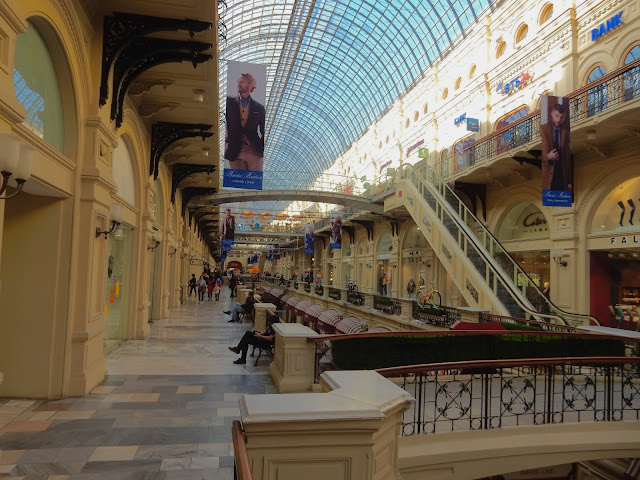 The round structure is the entrance for a Moscow METRO subway station. 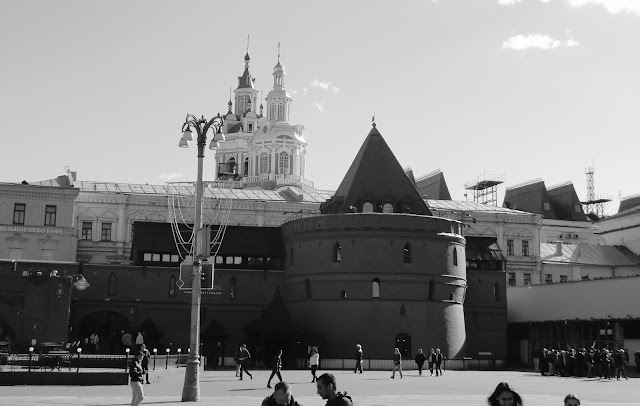 Underground, the stations are ornate, highly decorated with many bronze sculptures.
The trains are modern, efficient and fast. 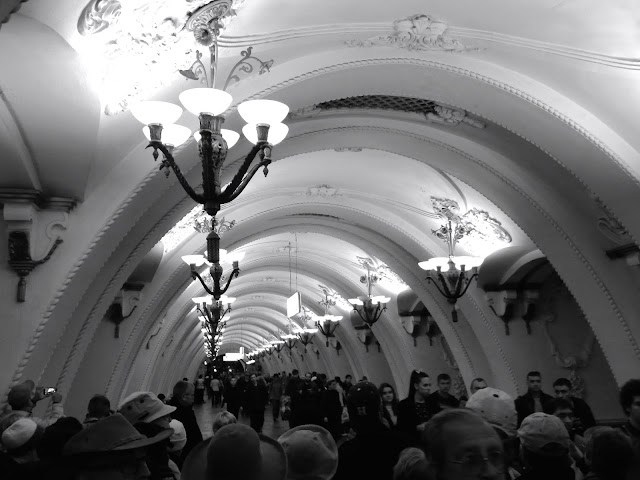 Many levels below ground a high-relief sculpture celebrates victory. 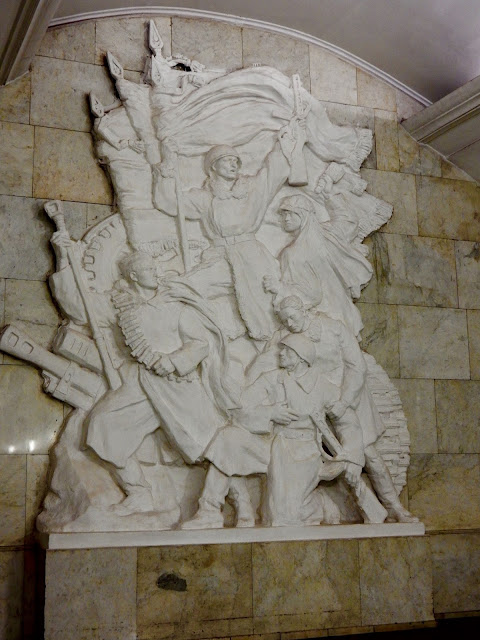 Paintings on every column honor the Russian workers, here fishermen. 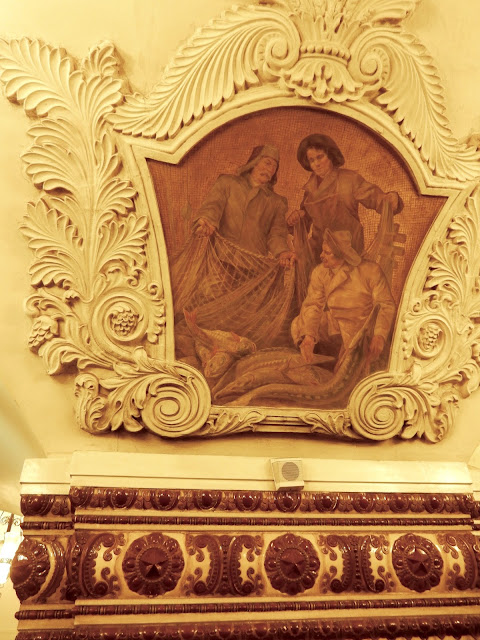 Or a mural depicting how great life is in the country with a joyous wedding. 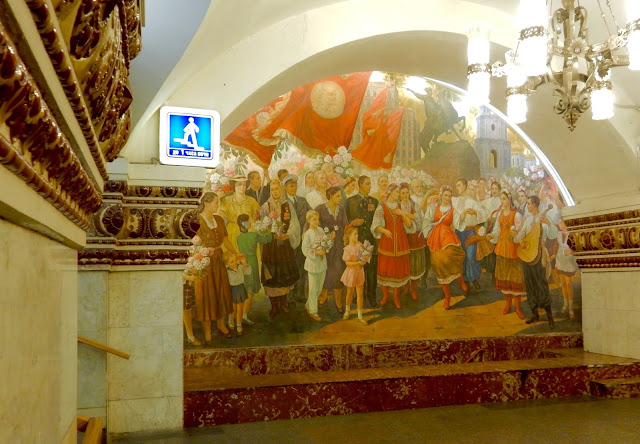 And of course the most famous building in all of Russia, St. Basils Cathedral.
Built in the 15th century during the reign of Ivan the Terrible. To think in the 1930's, Stalin wanted to tear it down to modernize Moscow. A couple of Russian historians opposed him on it, spending the rest of their short lives in a Siberian gulag.

In the background is a glimpse of Moscow city and power plant smokestacks. 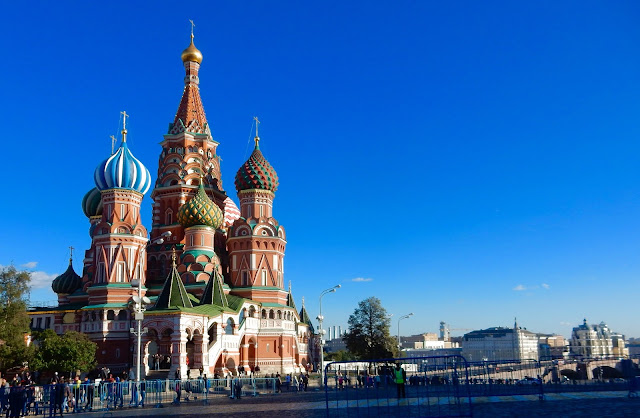 Next up, Part 2,  People, Puns and Putin