After a short ferry and long bus ride, arrived and checked into the Hilton Slussen in Stockholm.
Swedes can be complicated. The tub/shower in the hotel has FIVE (5) different controls, three near the nozzle and two at the foot of the tub, you have to work in order to get a hot shower, I think.

Finally settled for a lukewarm shower. 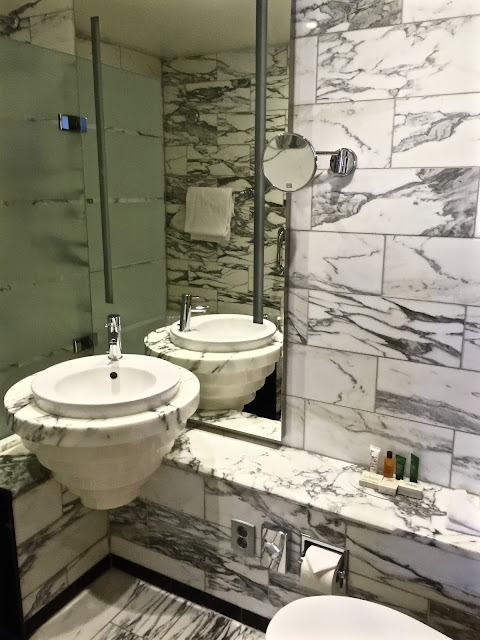 The skyline in Stocklholm has many interesting unique features of Scandinavian culture but I am more interested in what is happening at street level. 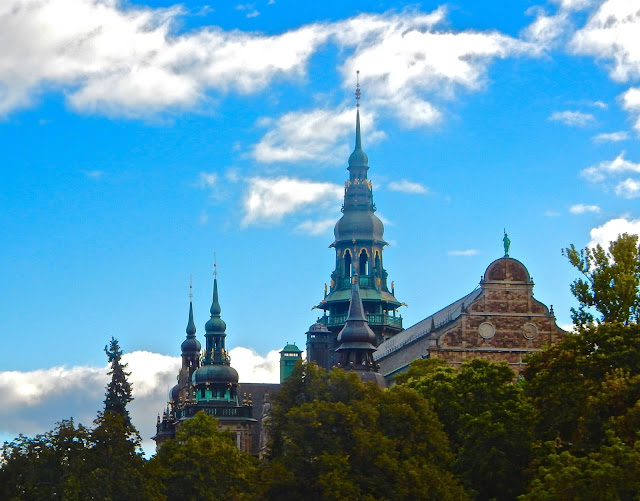 Museum displays of ancient wealth of dead aristocrats are boring to me.  I want to see where the old cobbler lived and worked, what kind of oven did the local baker use, where is the tinkers shop and what kinds of tools did the shipwrights use?  So am once again out exploring the old city,
my favorite world haunt.

Is now the last week of September, days are cooler, tourist season is over, kids are back in school, no problem finding an open table in the restaurants. 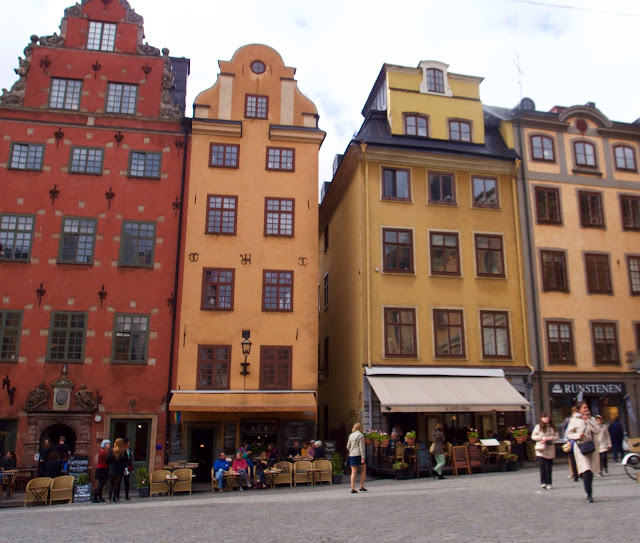 By 1400, Stockholm had a population of 6000. Looking about Stortorget, Stockholm's oldest public square,  I want to know who lived on the third floor, left window, 100 years ago?  How long has the family occupied this building? Is the lamp a family heirloom? 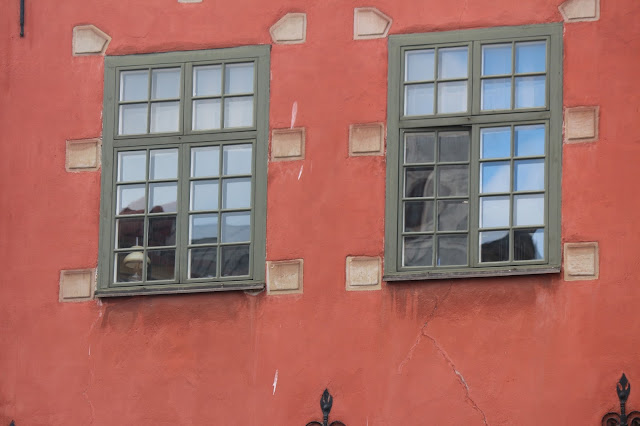 Is momo watching us from inside? 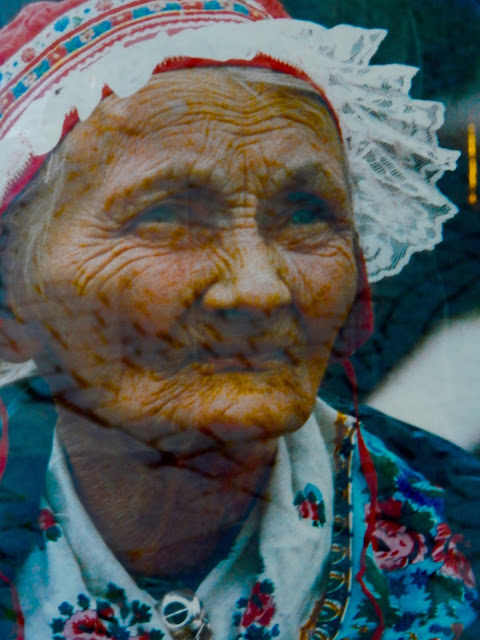 Coats are more prevalent now, yet the outdoor cafes are always open.
Time to roll out the tall propane heaters. 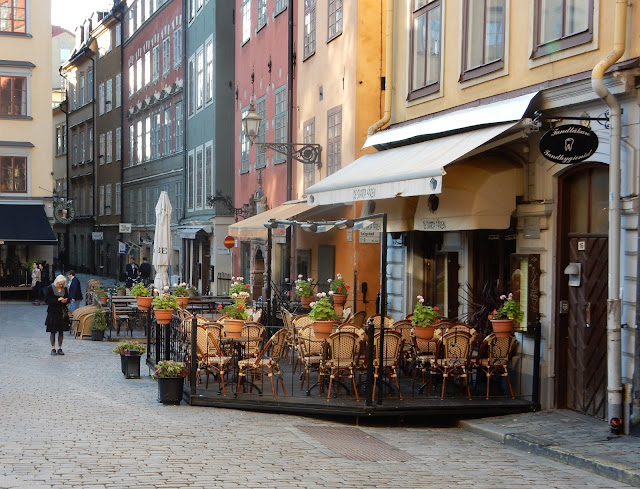 Amparo admires the old cathedral and its statues. 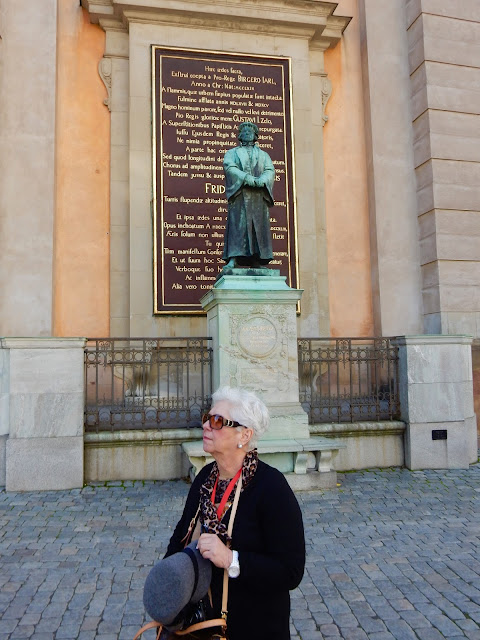 After 43 years of marriage, tried to get in to collect my Peace Prize.  Amparo claims we have had only one argument in all those years.... and it's still going on.

Alas, they are closed. The door is double locked.
TWO Closed signs, did they hear I was coming?

Have to go back to my ornery cantankerous self.
Playing the old grumpy guy bit can be habit-forming. 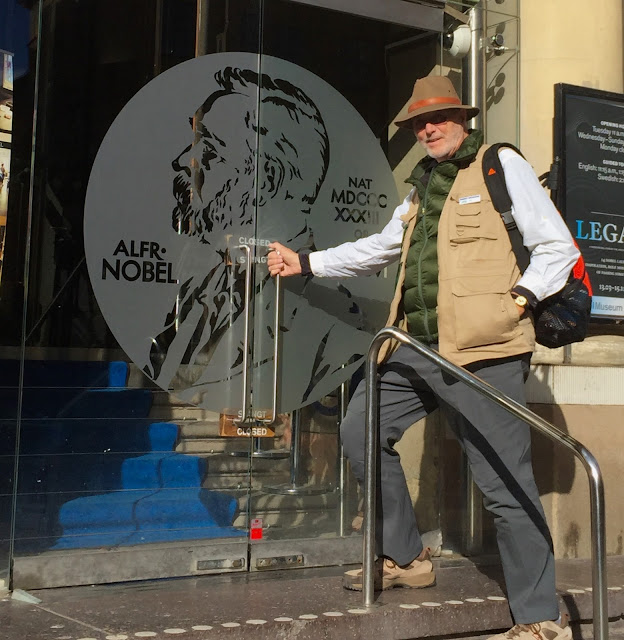 What could have been....
now that they give the medals out for what you say and not what you do...

I'll say...  you can keep your doctor,
you'll save $2500 a year on healthcare,
the most transparent government ever,
nothing wrong at the IRS,
Benghazi was all about a movie...

What else do you want to hear?  Can I have my medal now? 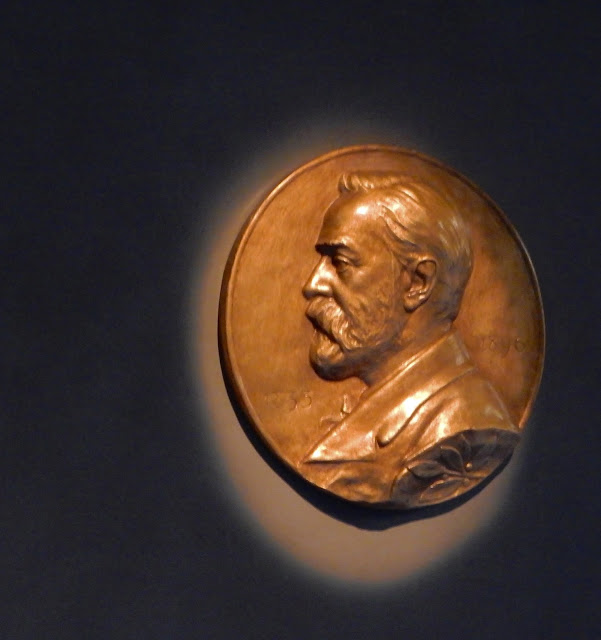 Back to the real world, wandering cobblestone streets! There's a Saint George slaying the dragon statue. Not sure this has to do with Sweden, but makes for a memorable landmark where two streets intersected.

So you invite a young lady out on a first date by saying -
I'll meet you at the dragon slaying after school?

Hmmm, how do kids skateboard on cobblestones? 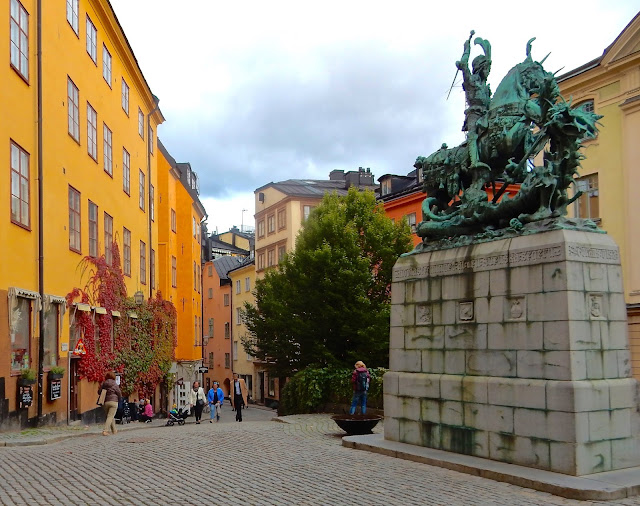 Skies are grey but the fall colors are rich.

The narrower the street, the older the lane, the more interesting it is to me. For hundreds of years, people have walked these roads, touched these walls, fallen in love,
raised families, mourned for those lost....
am moved and lost in the timeless history of memories one feels exploring the narrows. 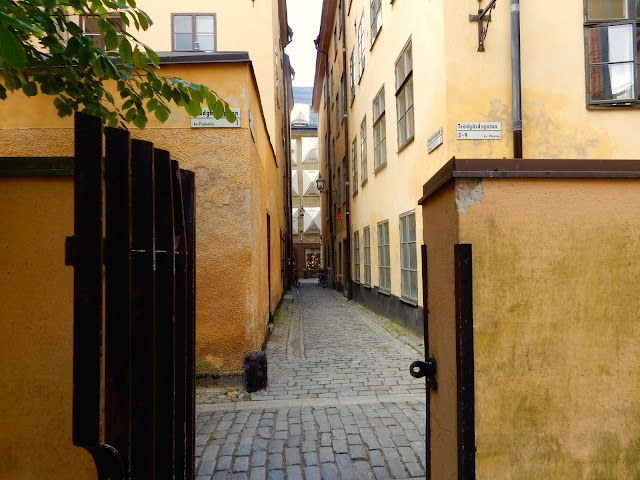 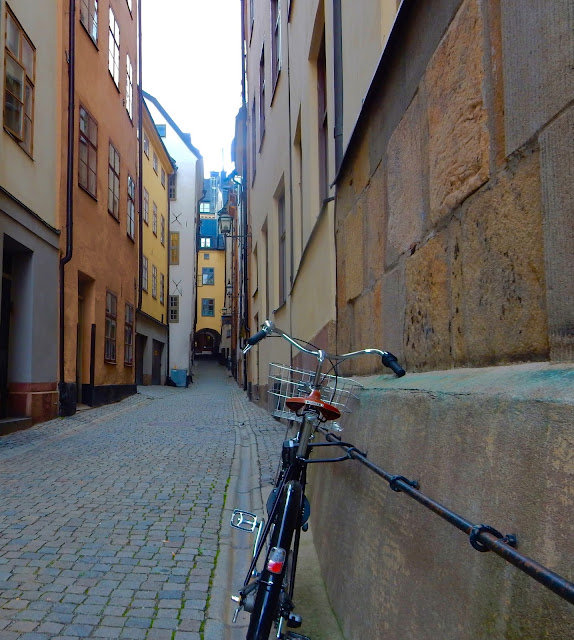 Unlike Harley's, bicycles don't mark their territory with oil spots.

A solitary plasterer repairs a stucco wall.
Wonder how many different tradesmen have worked over that same wall in the last 600 years. 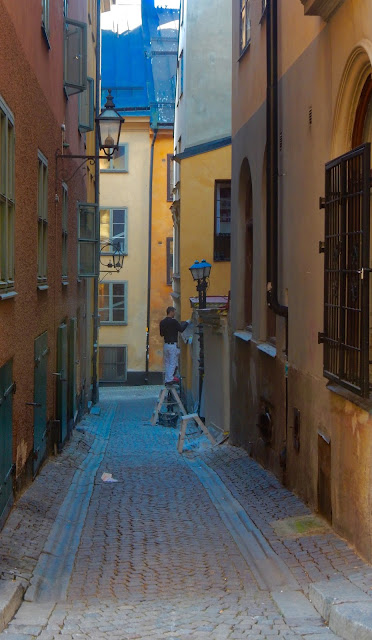 Cooler weather is keeping everyone inside. Noticed that the further north we go,
the less people smile. Why is it that... the fewer smiles?

They're not unfriendly or hostile, but they're slow to smile.
People in southern climes are more open, more friendly, smile more,
more willing to talk to strangers.

Child care and education is free for all citizens in Sweden.
Taking the pre-schoolers for an outing, safety first.
Noticed again the lack of smiles. 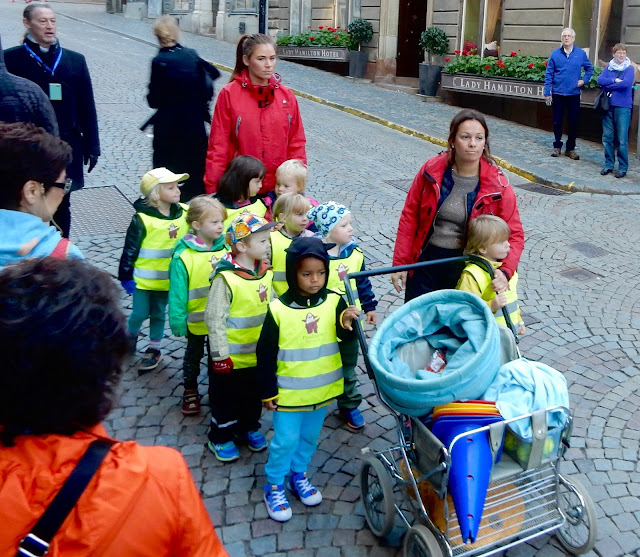 Next up, an overnight ferry/cruise to Helsinki, Finland. Now where did I put those Euros and what can I quickly spend the last few Swedish Kronors on?