From Germany we took a ferry out of Rostock to Denmark. Changed our Euros for Danish Kroner.

Our hotel room offered a great view overlooking old town Copenhagen. Of course we took the programmed city tour of palaces, museums, churches, etc.  Copenhagen old town is a compact flat island with more bicycles than automobiles. And more boats than bicycles, or at least it seems that way. 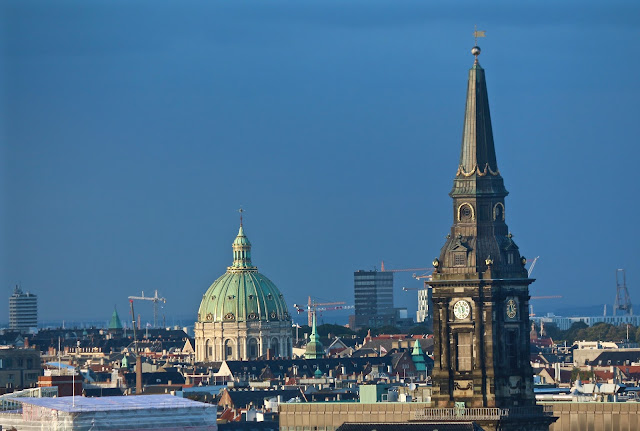 At the Amalienborg Palace, the Guards are young and more relaxed.  They didn't seem worried about anyone trying to break in or the royal family trying to get out. 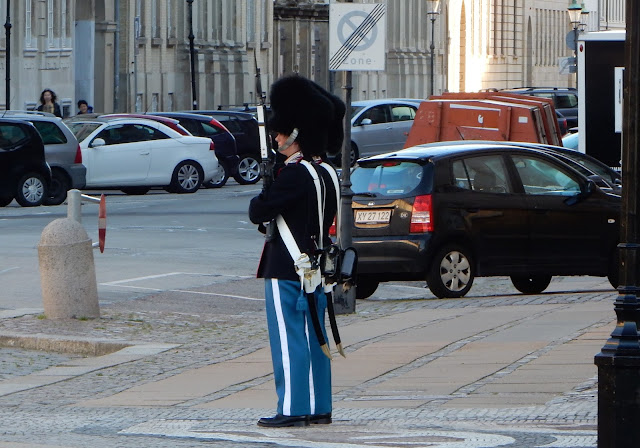 The opulent Christianborg Palace was void of much furniture, nice parquet floors though. 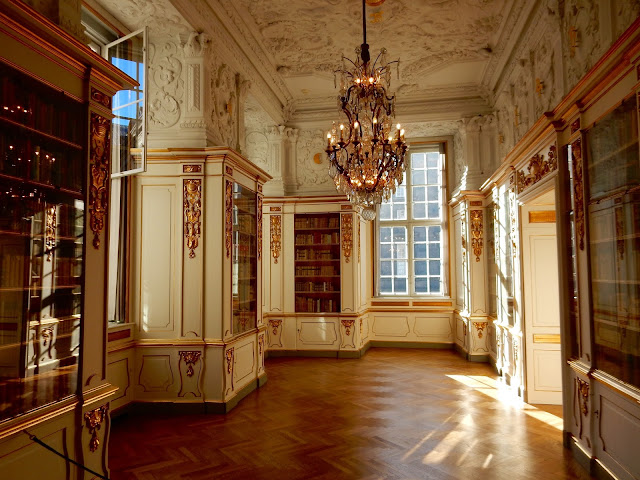 Looks like we're too early for lunch at the palace dining hall. 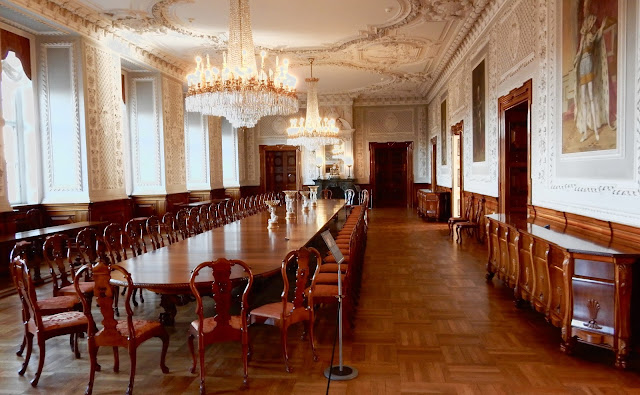 Trying my best to not get heads of other tourists in the picture,
so just as I snap the photo, the fountain decides to jump in. 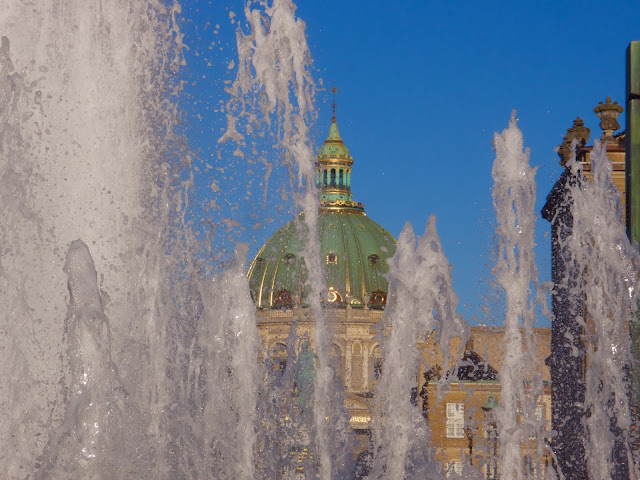 Many canals and waterways lined with shops and cafes, divide downtown Copenhagen into neighborhoods. 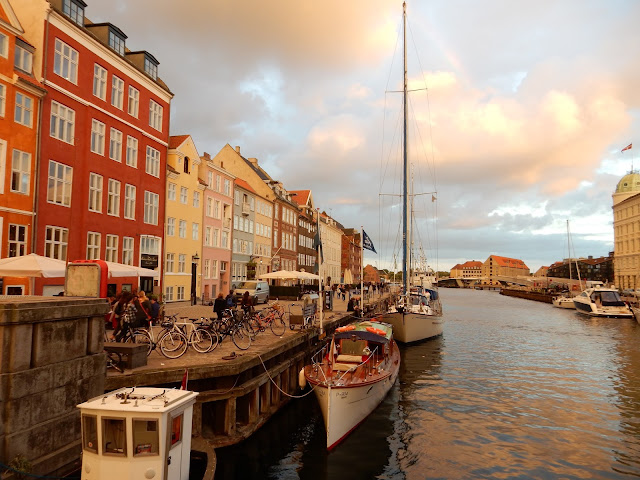 How could we possibly go to Copenhagen and not visit the little lady....
who watches over the Danes cruising her waterways since 1909. 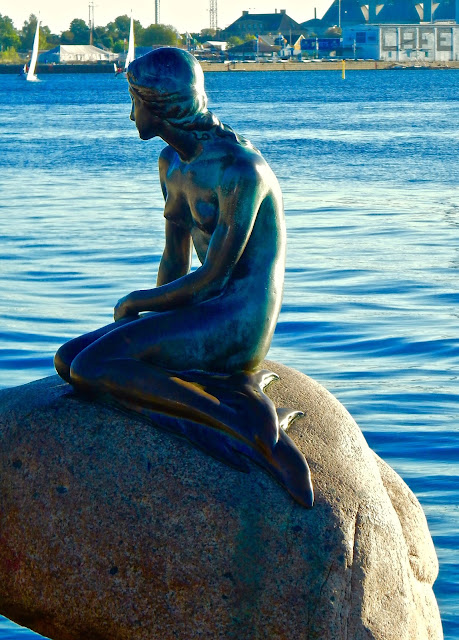 From the hotel, spotted a church with a spiral walkway around the outside of the steeple in the Christianshavn neighborhood, a different island from Old Town. Saw I could walk across a pedestrian bridge over the old moat for a closer look. 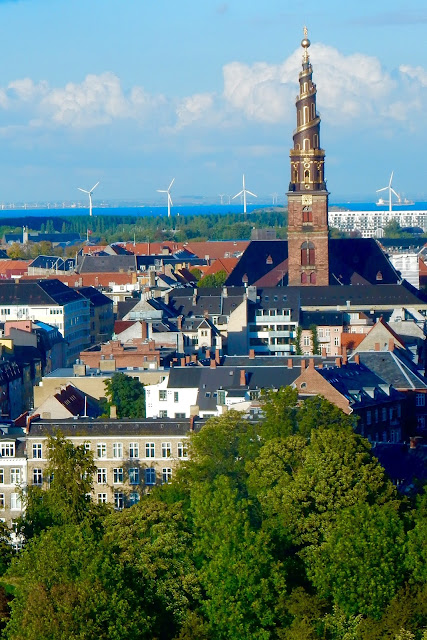 Wandering the cobblestone streets in Christianshavn, am amazed at all the bicycles. With their mild coastal weather they say they cycle year round. 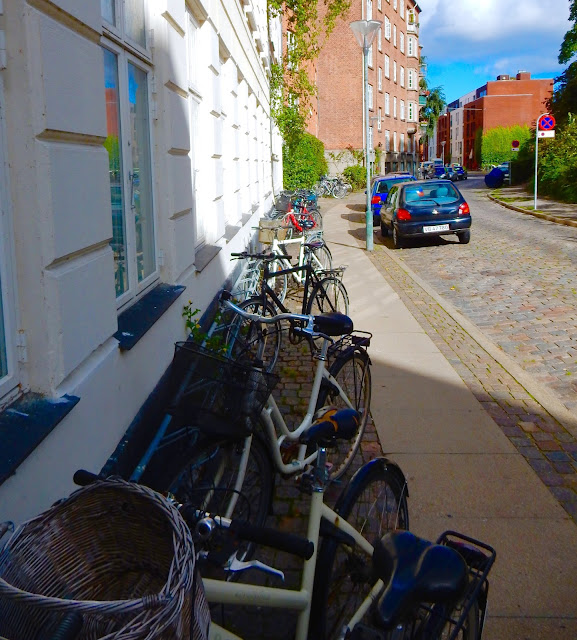 Arriving at the church, could not bring myself to violate one of my cardinal touring rules, Never pay to go into a church. God can hear me from outside as well as he can from inside.

Noticed quite a few people walking past the church toward another area, so decided to follow the flow. Arriving at a rather funky post-hippiedom park called Christiania, or the Green Light District.

In 1971, 700 hippies claimed squatter's rights on an unwanted abandoned military base. This weekend they are celebrating the anniversary of the occupation.  While the buying and selling of drugs is illegal in Denmark, the government has decided to ignore the potheads, idealists, non-materialists, the "Bob Marley" youngsters and "Willie Nelson" oldsters who just want a little puff. To protect their non-aggressive way of life, this self-administered neighborhood outlawed automobiles, hard drugs, firearms, explosives and violence. 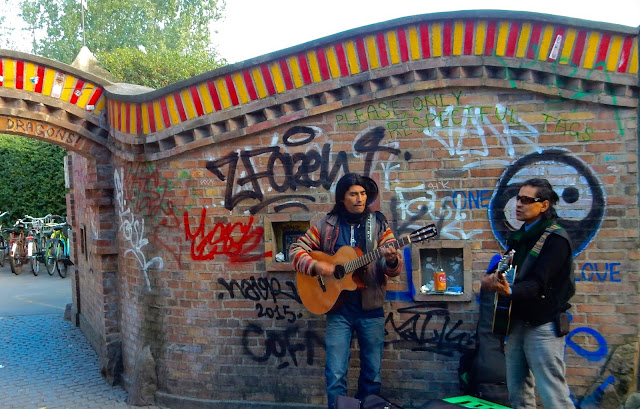 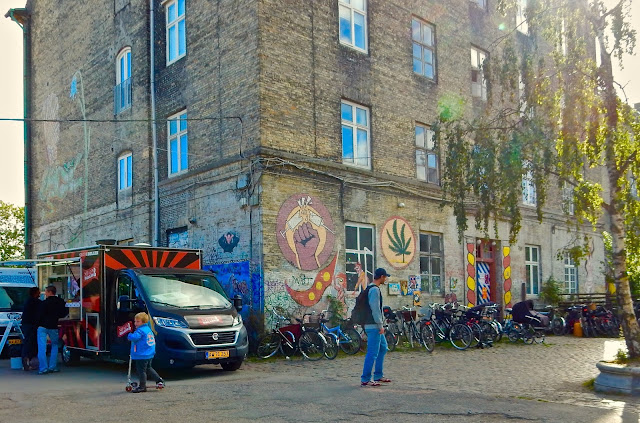 The welcome sign in multiple languages, reads
Dear Friends,
There are three rules in the Green Light District. 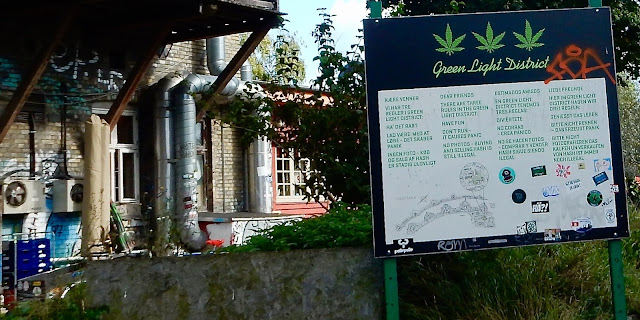 Sorry, no more photos . You will just have to go experience it for yourself.

Departing for Sweden by ferry, our final Danish vista is the Kronberg Castle. 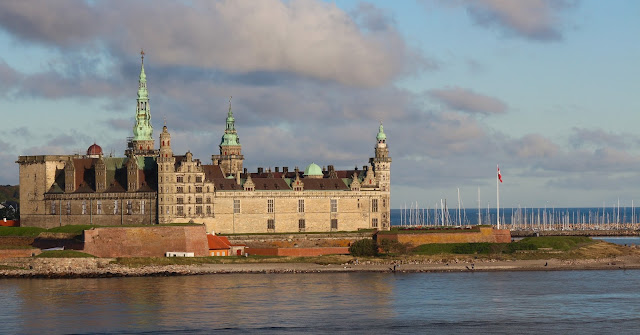 Next stop, Sweden, now to find where to change our Danish Koners for Swedish Kronors.