On a narrow tree lined street in Berlin, sits a sidecar rig parked on the sidewalk. One’s first thought is how nice and clean it is. Not that cheap bright plastic shine, but a hand rubbed pride of ownership sheen. The smooth soft silver bodywork on a bright red frame is a strong hint that the owner has spent many hours with his hands on this beauty.  The second observation is the total absence of any logos, brand markings or labels anywhere on the bike, the engine or on the sidecar. 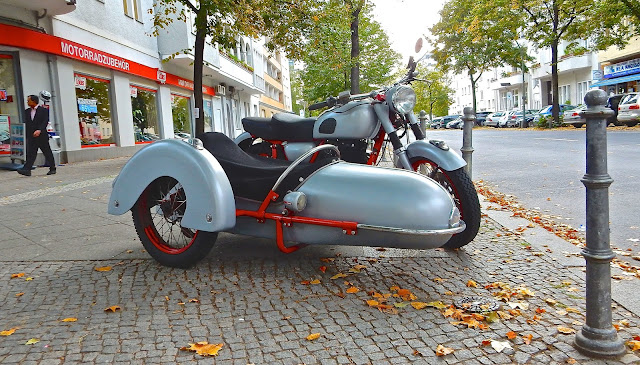 The motorcycle has a familiar shape and look yet something is different. The sidecar has a comfortable old school look but… it too is not like others I have seen. Is this an Eastern Europe bike that we rarely see in the States or maybe a recently built Indian knock-off?  Definitely calls for a closer inspection.

Starting with the engine: it’s a single cylinder, air-cooled, four stroke, very clean, no grime, no dripping oil. Appears to be a mid-size 300 to 600cc?  Has a carburetor and a glass in-line fuel filter. That’s unusual. The standard gear shift and drive chain on the left side means it not older than mid-seventies though it looks to be much older. Maybe a retro fit? 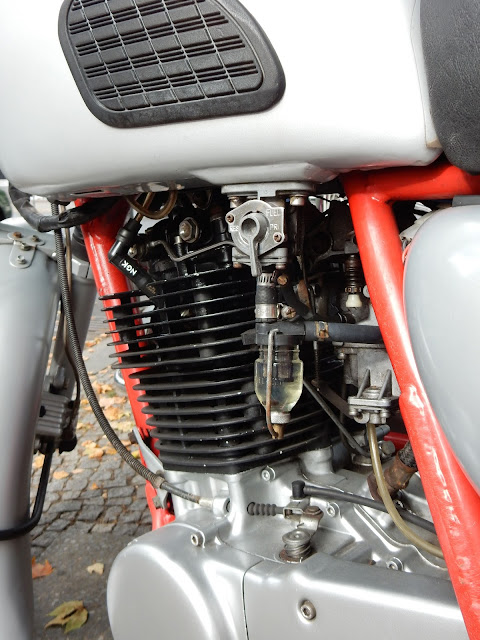 The two disk brakes with solid rotors on the front wheel says mid-seventies or newer yet a small drum brake on the rear wheel declares it's a much older bike. The trailing edge of the front fender has a low wide flare to divert water away from the engine and rider’s feet. Looks like a 1970’s bell-bottom pants leg. The front fender carries a seldom seen small chrome running light top center.  A matching running light is on the sidecar fender. A single round headlamp sits in front of a speedometer marked in kilometers. Handlebars are a chrome low rise with a wide grip. Again standard clutch on the left, front brake on the right. No windshield. No turn signals. Nothing to identify the manufacturer. 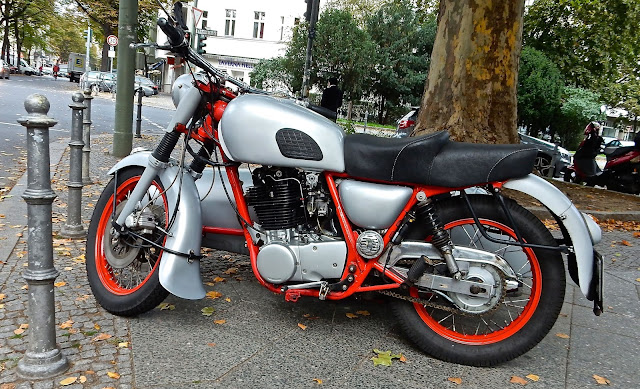 The seat is a custom bench seat residing above a chrome after market horn. Not unusual for an owner to replace a factory seat with a more comfortable custom. The rear fender is interesting. It’s hinged for ease of removing the rear tire, but the fender mounts are unlike any I have ever seen.  It has a small diameter old school looking taillight that matches the taillight on the sidecar fender. Maybe this rig is older than I thought. 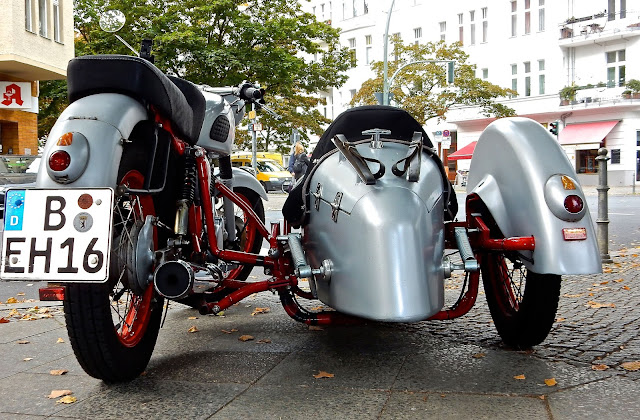 Turning to the sidecar body, the front has that familiar torpedo shape of a Cozy brand sidecar we see in the States but this one is different.  The rear section of the body is tapered like the nose of an Indy racecar with a trunk lid and a small luggage rack. The tube body is mounted at two pivot points to the sidecar frame in front of the passenger seat. The rear of the body is hung with two chrome extension springs.

The fender looks to be a familiar design yet the running light on top and the gap between the fender and the sidecar body hints this is not factory. 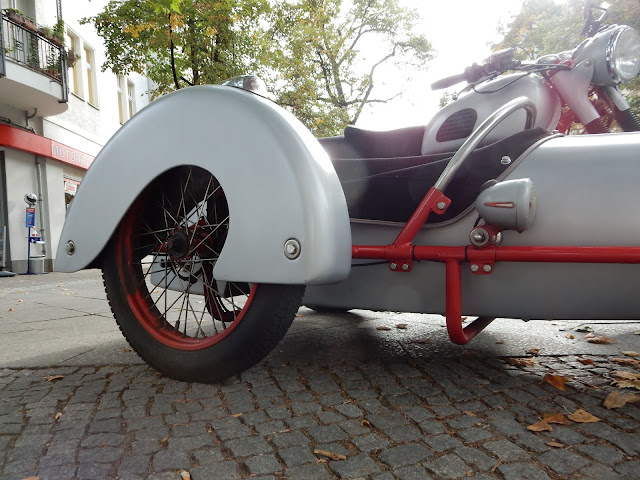 The sidecar frame itself is attached at four points to the bike, which appear to be factory mounting hardware, though not like any I have seen.  The three wheels have normal squared off sidecar tires. 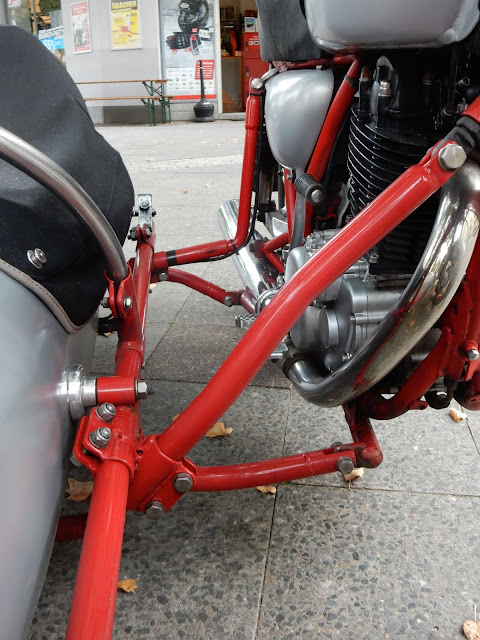 Still not finding any hints as to brand or country of origin, I look around for someone to ask about who might own this rig. Have many questions to ask to resolve this enigma.

Only now I notice the rig is parked in front of a motorcycle gear shop, LOUIS Fun Company. With any luck the owner will be a customer inside buying something for his beautiful machine. Entering the store I ask the cashier if he knows who owns the sidecar rig out front.  He calls out something in German toward the back of the store.  A tall slender fortyish man with dark hair emerges from behind a stack of helmets. The cashier introduces him as Erik Haid, the sidecar owner. 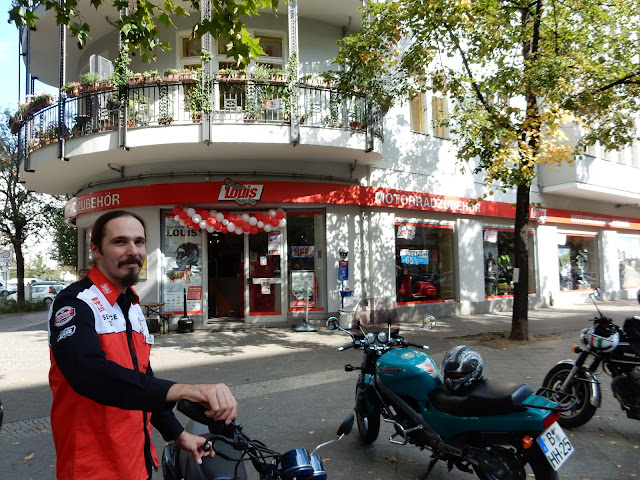 Fantastic! Erik willing shares his story of how he built this truly one of a kind rig. What good fortune, but it quickly fades once we realize our linguistic skills are not up to discussing things technical. While Erik’s English is a thousand times better than my few German phrases, we are stumbling over too many technical points. Quickly we recruit an interpreter. Thank you, Detlev Louis.

Starting with just the engine, frame and gas tank from a badly wrecked 1980 Yamaha SR500, Erik started an epic journey of building his dream sidecar rig. After removing the useless damaged parts and sections, deciding what was salvageable and what to discard, Erik spent the next seven years rebuilding with whatever parts he could source in his native Berlin from salvage yards, abandoned bikes, scavenger hunts, friend’s parts bins and neighbor’s garages. What he couldn’t find, he fabricated himself. With a limited budget of money and time, Erik applied ingenuity and creativity to meet the challenge. Very few new parts were bought. Most everything was outsourced and recycled.

The original front forks were twisted beyond repair. Searching around town, Erik found a set of forks with twin disk brakes off a Yamaha XS650. Then the headlamp, speedometer, ignition and front fender were scavenged from several different MZ BK350 bikes. Of course the many pieces from all these different manufacturers could never fit together, so Erik cut, hammered, welded and reshaped everything until they did fit. He says there was a lot of trial and error fabrication going on. He would try something, go for a test ride then rework it again until he was happy with the results. Today everything fits together seamlessly as if it came from a factory that way, just not like any other rig you have ever seen.

Erik thinks the sidecar might have been made by Globe in India. When he got a hold it, it too had been in an accident. I thought the front looks familiar but not the tail section. That’s when Erik explained the tail was smashed in so bad he had to build a new rear section of his own design. While he was at it, he added a trunk with a top lid and a chrome luggage rack.  Instead of the Cozy style rubber band mounts for the sidecar rear, Erik decided to use a pair of chrome extension springs.

He says many of the original sidecar mounting brackets and sub frame parts were missing as well as the sidecar fender. Back to scrounging for parts, Erik either outsourced or fabricated whatever he needed in order to move the project forward. He freely admits that not everything worked out on the first attempt. Many variations of parts and ideas were tried, removed, reworked, discarded and another approach tried before arriving at what we see now.

Erik says the most difficult task for him was having to completely rewire the bike and sidecar.  Having no factory wiring schematic to work from, Erik created  his own. In a burst of inspiration, Erik decided to use matching old style small diameter taillights on the bike and sidecar but the crowning touch was to mount on top of the fenders small chrome running light from an early VW Beatle.

Satisfied that everything was working properly as he wanted, Erik totally disassembled the rig, smoothed the welds, added gussets, sanded, polished and painted. Then reassembled the hundreds of parts into a smooth running machine.

Not only was Erik concerned about building a safe and smooth handling rig if his family was to ride in it, he also wanted it to look good.  An elderly German couple stopped to admire the rig while we were talking. They complimented Erik on a fine looking machine.  Looks like Erik has accomplished his goal. This sidewalk enigma is indeed a fine example of good design, hard work, resourcefulness and German ingenuity. 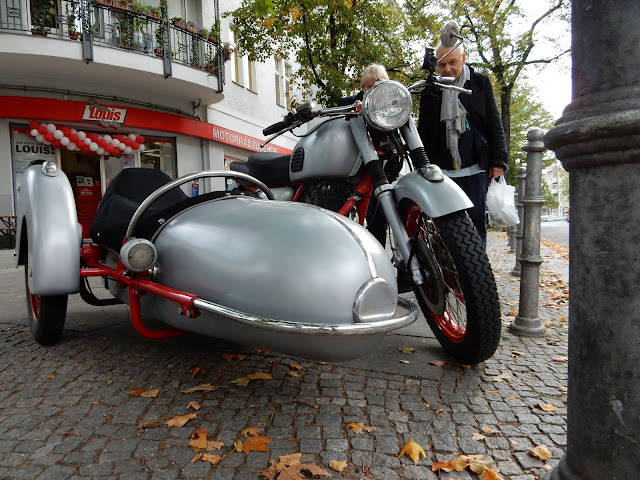 After seven long hard years and countless late night hours, Erik now owns a sidecar rig that anyone in the world would be proud to call their own.

If you are ever in Berlin, go to Louis Fun Company at GuntzelstraBe 17-18. Erik works there. Tell him you heard about his sidecar  story, his personal enigma.