Seems this past month has been a time for wrenching and waiting. Put the finishing touches on the Gen 1 KLR650, thought I had it sold, but not yet............ 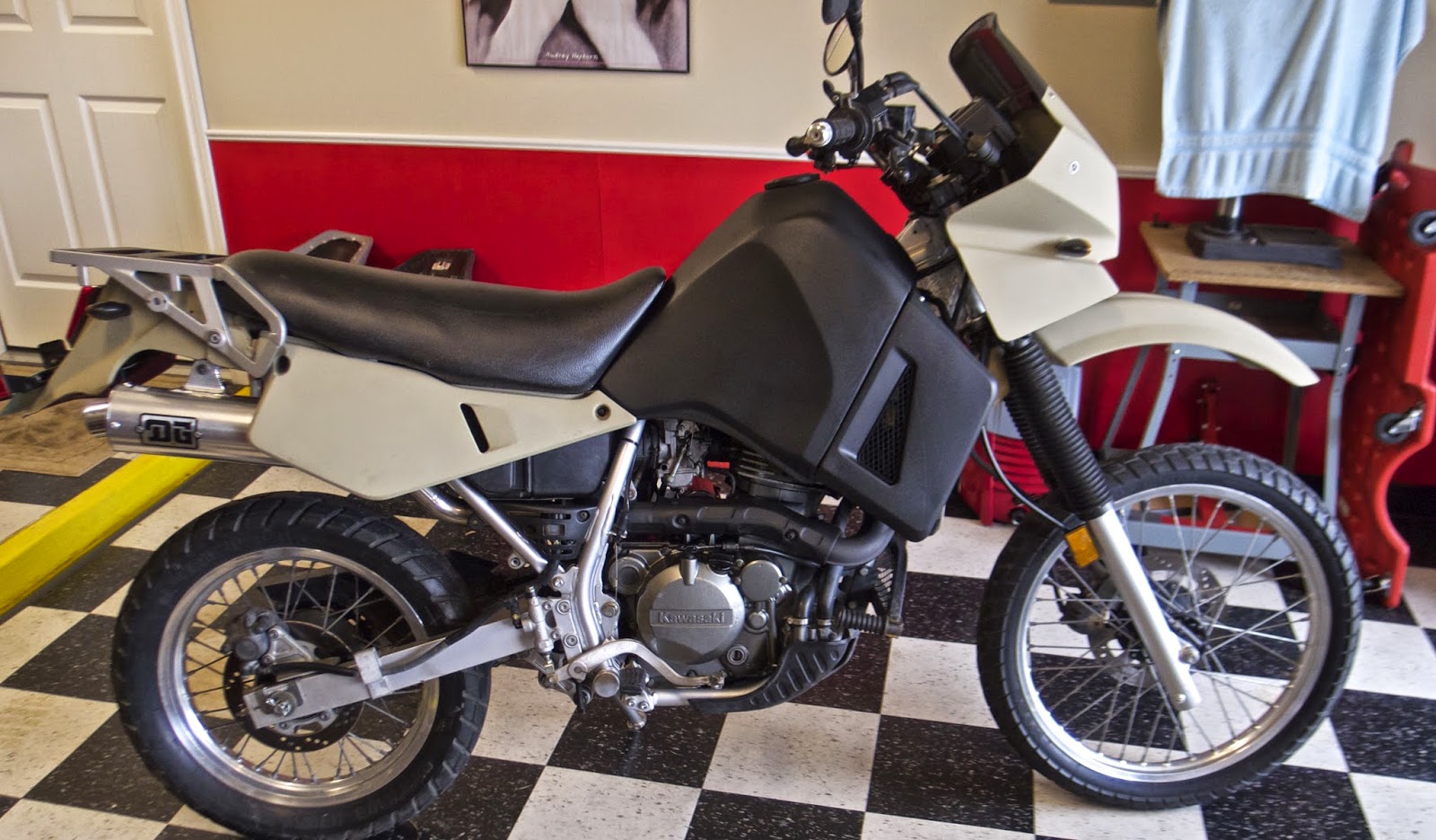 Focus has been on the Gen 2 KLR, the big eyed beauty.  Making numerous changes, upgrades, and mods to suit the trip I have planned for her. 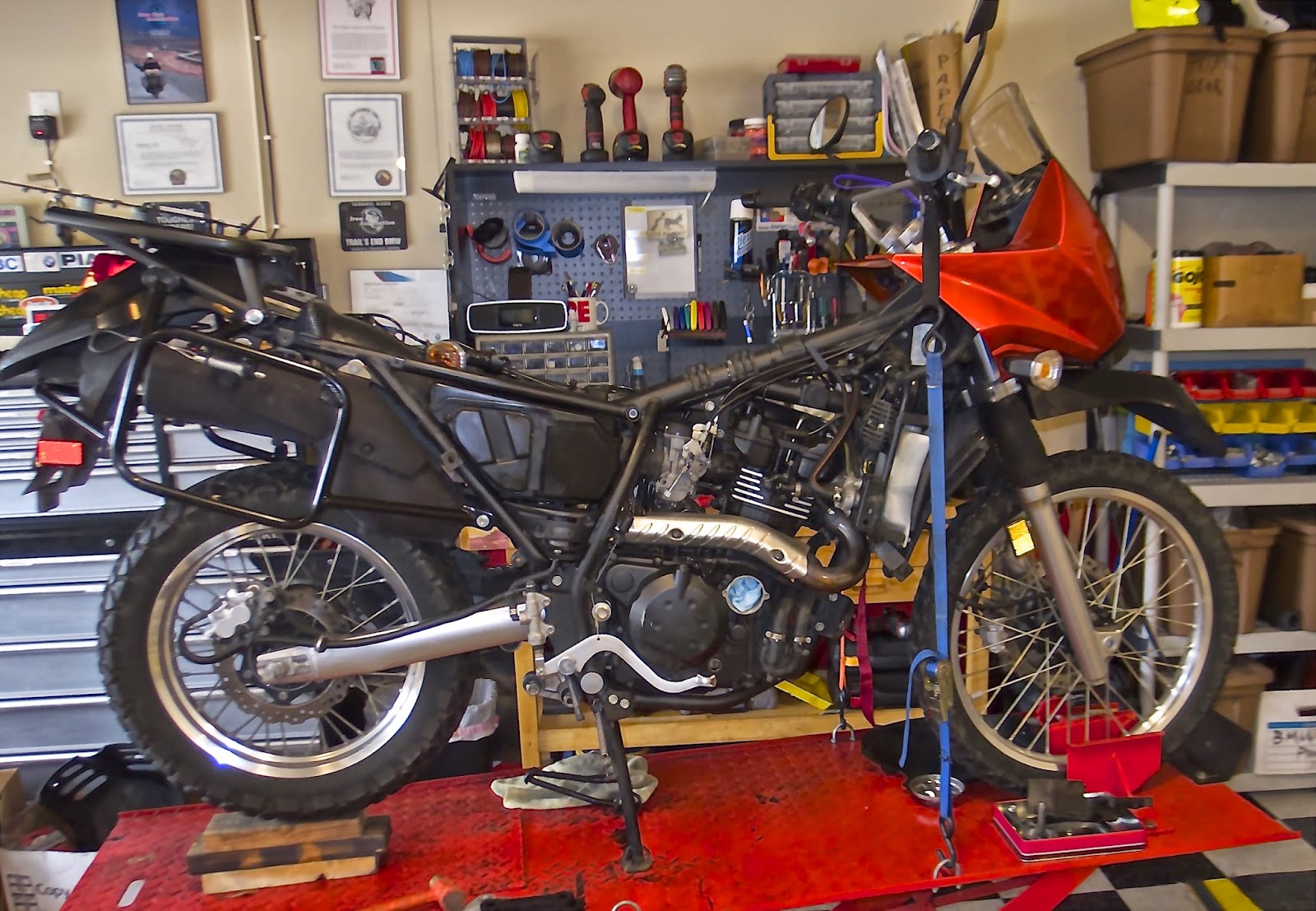 Added side racks for panniers and a top rack for a large box where I can recharge a laptop and camera batteries. Reinforced the rear subframe to carry a heavier load, upgraded the doohickey, install LED headlights, fork brace and handlebar risers.

Since I'll be adding quite a few new electrical outlets and lights, needed an auxiliary fuse block. Looked and looked to find one that would fit in the spaces I had to work with.  Also wanted to located it somewhere where I could easily access it to check and replace fuses without having to disassemble half the bike to reach it. 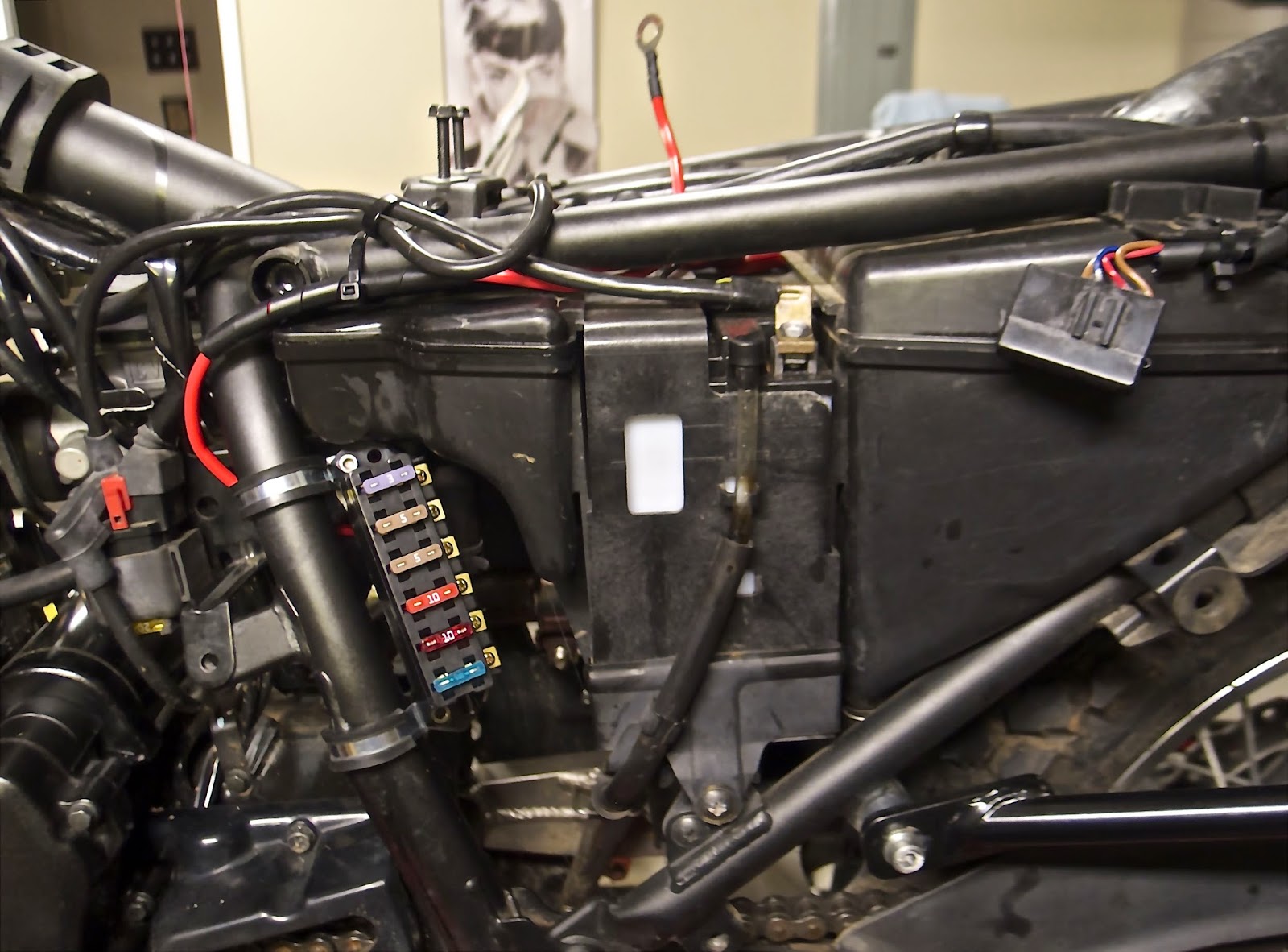 The long six circuit block fit perfect and will handle the load. The circuits to be wired are:
1). Charging port near the handlebars for iPhone/GPS while riding
2). Charging port in the rear top box for recharging a laptop
3). Driving/fog lights to be installed on front of sidecar box
4). Heated jacket and gloves
5). Air horn for safety
6). Open spare circuit

Decided the final drive needed strengthening: The standard 520 chain was replaced with a stronger 525 o-ring chain, a 525 15 tooth counter sprocket and a 49 tooth rear sprocket. 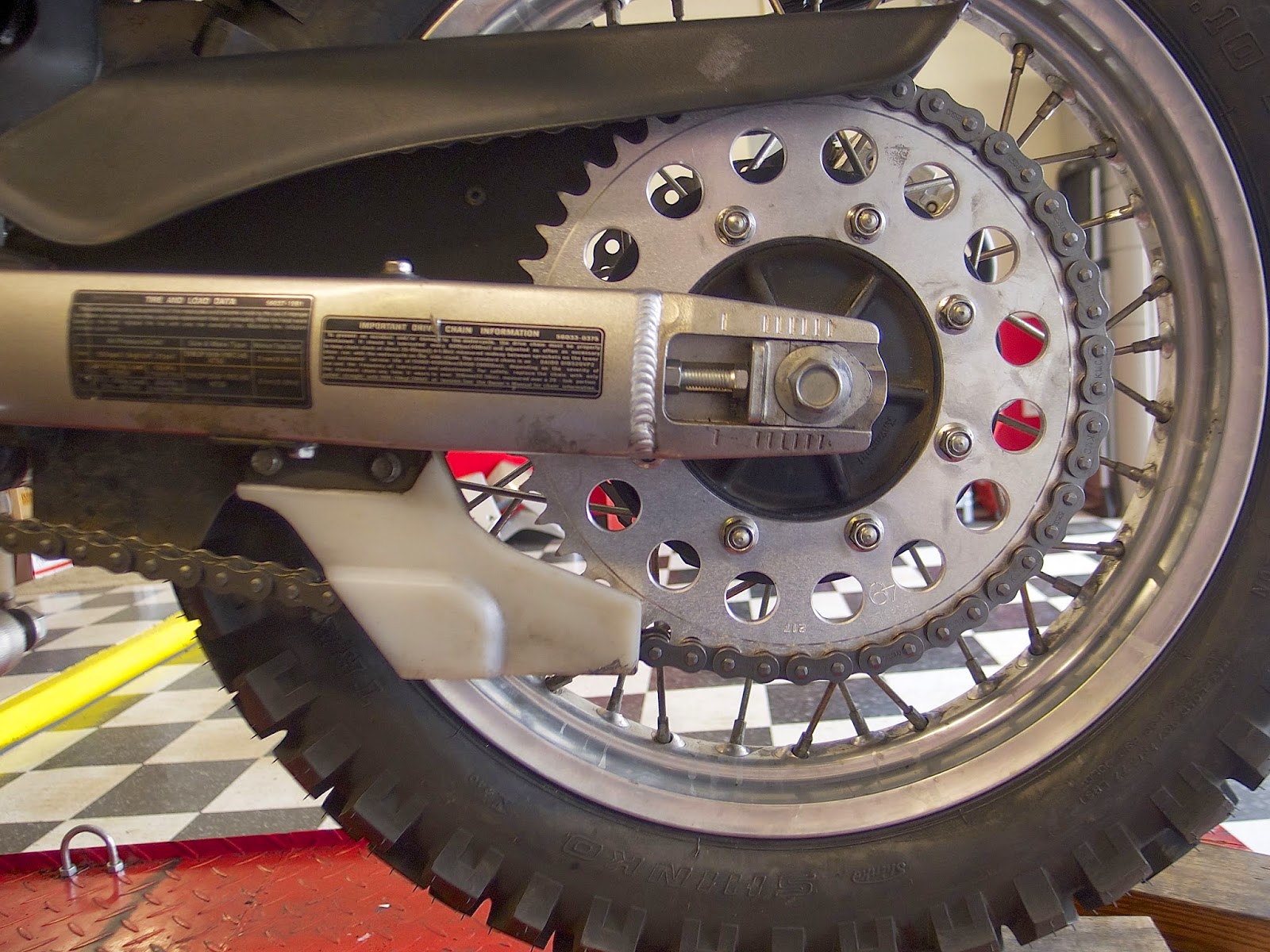 The larger rear sprocket will give better low end torque when starting off or when in soft sand and mud. It also reduces the top end speed, but that is not an issue where we plan to go.

Yet to be installed is a larger front brake rotor for better stopping. The sidecar was ordered with a disk brake so the rig will have three disk brakes in all, one on each wheel. Can't have too much braking power.

DMC Sidecar called to say a large crate is headed my way. Oh, boy, Christmas in April... can't wait to open the box and start the connection process.  But first have to move some things around...  or sell something...  or.... the workspace is getting crowded with three bikes/rigs in here. 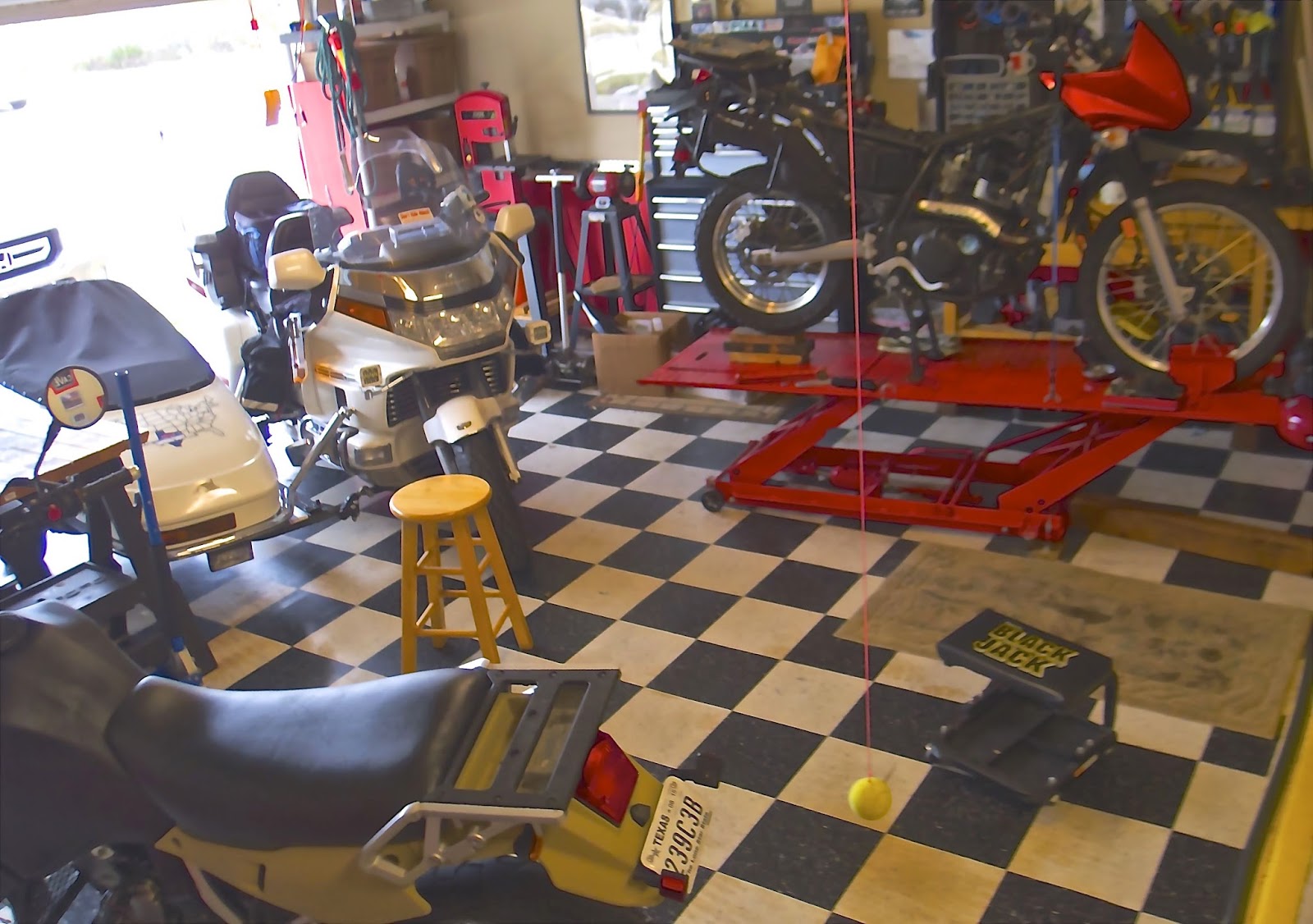 My neighbor Gary has gotten involved in the building process with me. He loves a challenge and is not afraid to turn a wrench or two. Really helps when two brains are sorting out a problem or an install issue.  There have been numerous times when four hands wrenching are better than two.

Until next time, when the crate arrives....