The 2006 Khaki Kawasaki has flown the coop, now resides in Austin.  Just in time for a huge crate to arrived from up north. Not from the North Pole, but from Enumclaw, Washington.

The long awaited sidecar chassis I ordered back in early February has arrived. Hot Dog! 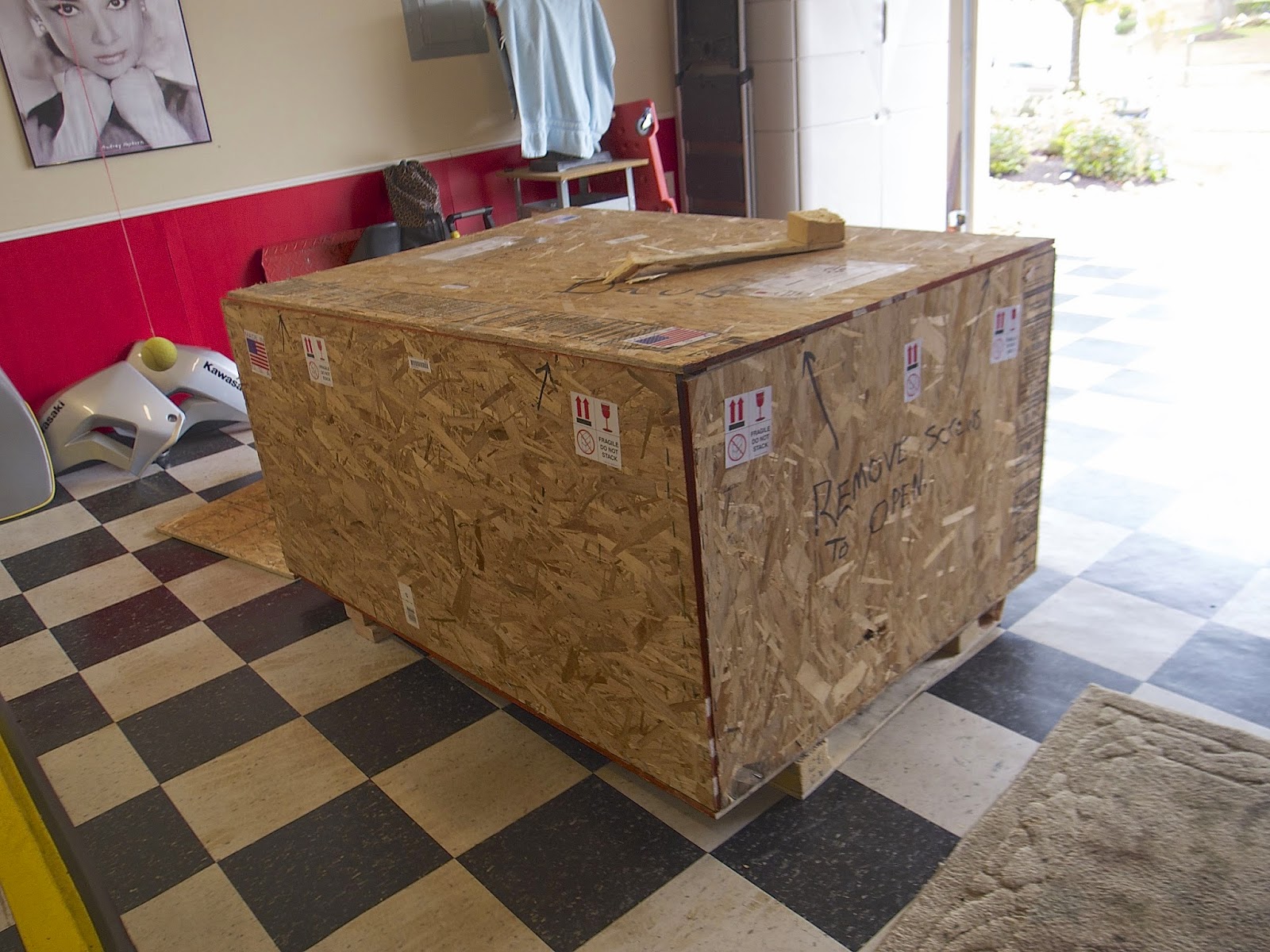 Immediately I tore into the box, the first to come out was the most beautiful 19" chrome wheel... 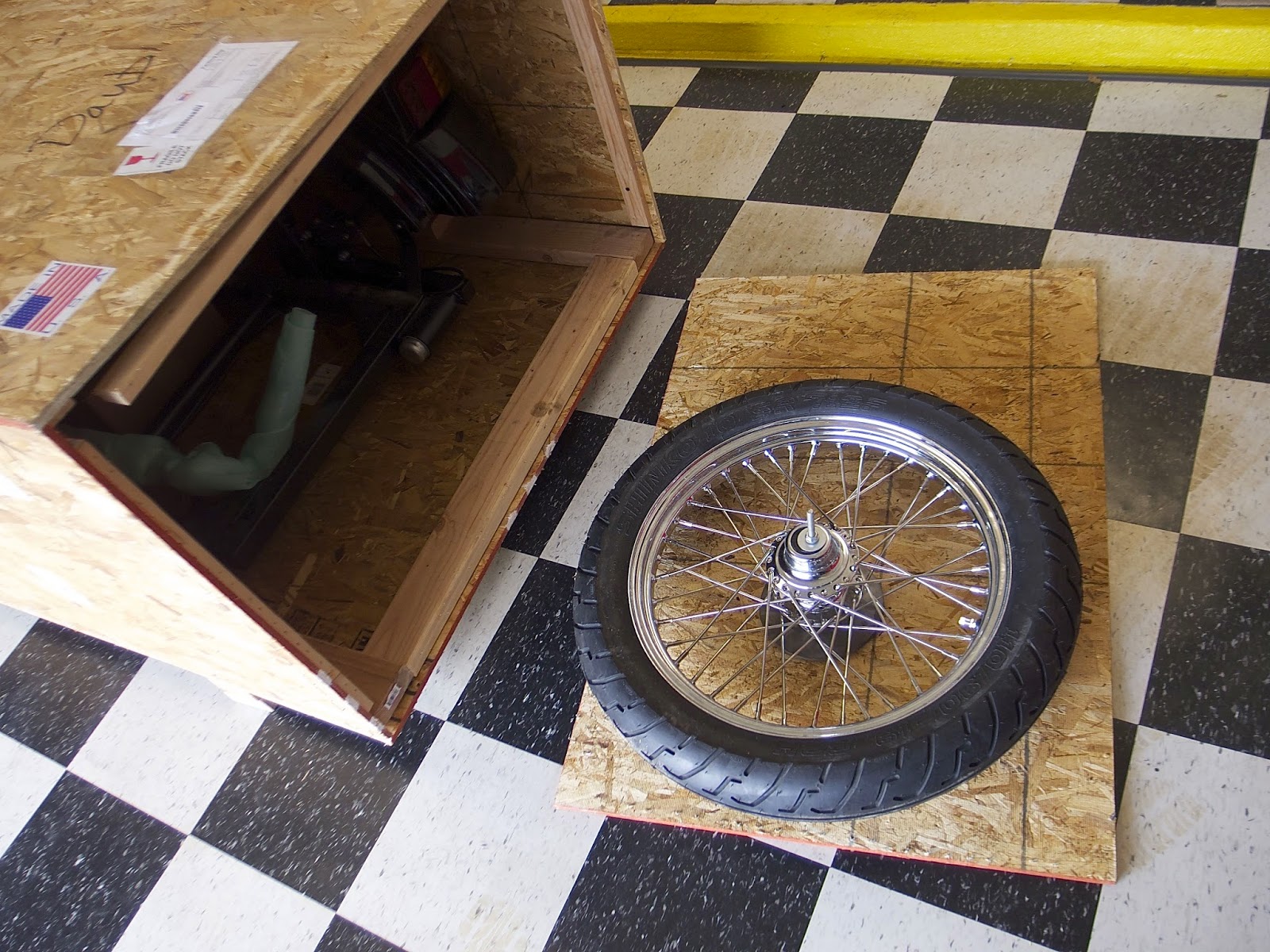 Stripped the top off to review the rest of the contents. 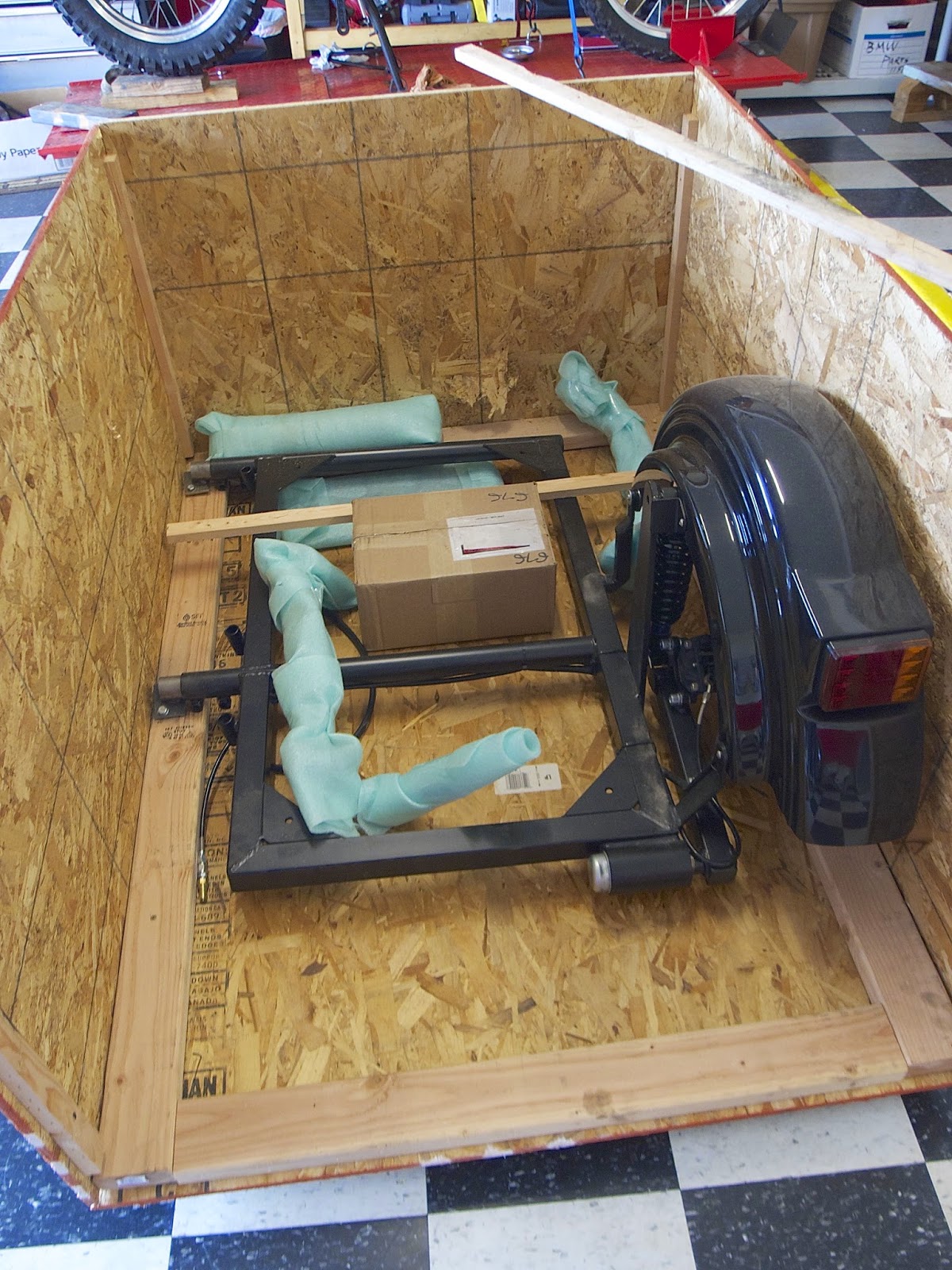 Pulled out the various connecting pieces plus the box with nuts, bolts, linkage and instructions


Knocked the crate sides off to better check out the chassis. May not look like much to most, but I can see the finished sidecar in my mind's eye. And I like what I see... 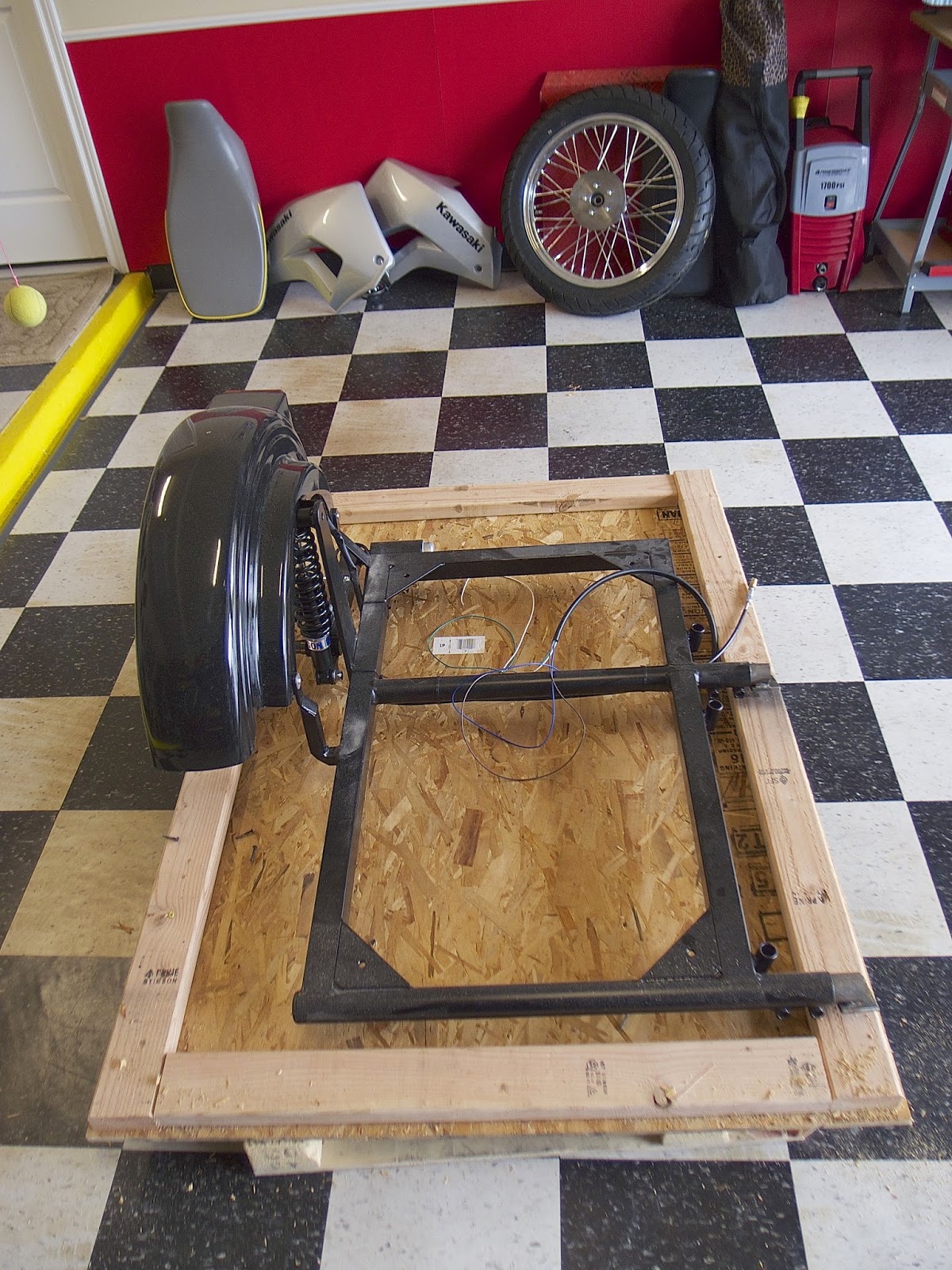 First we have to mount the subframe onto the KLR so the sidecar has a place to connect. This process involved removing several factory pieces and replacing them with new braces. The lower subframe is very strong and well designed. It comes in two halves, a left and a right. There are six bolts mounting it to the bike and well as four additional bolts connecting two halves together.

Here is the subframe mounted with the optional skid plate. 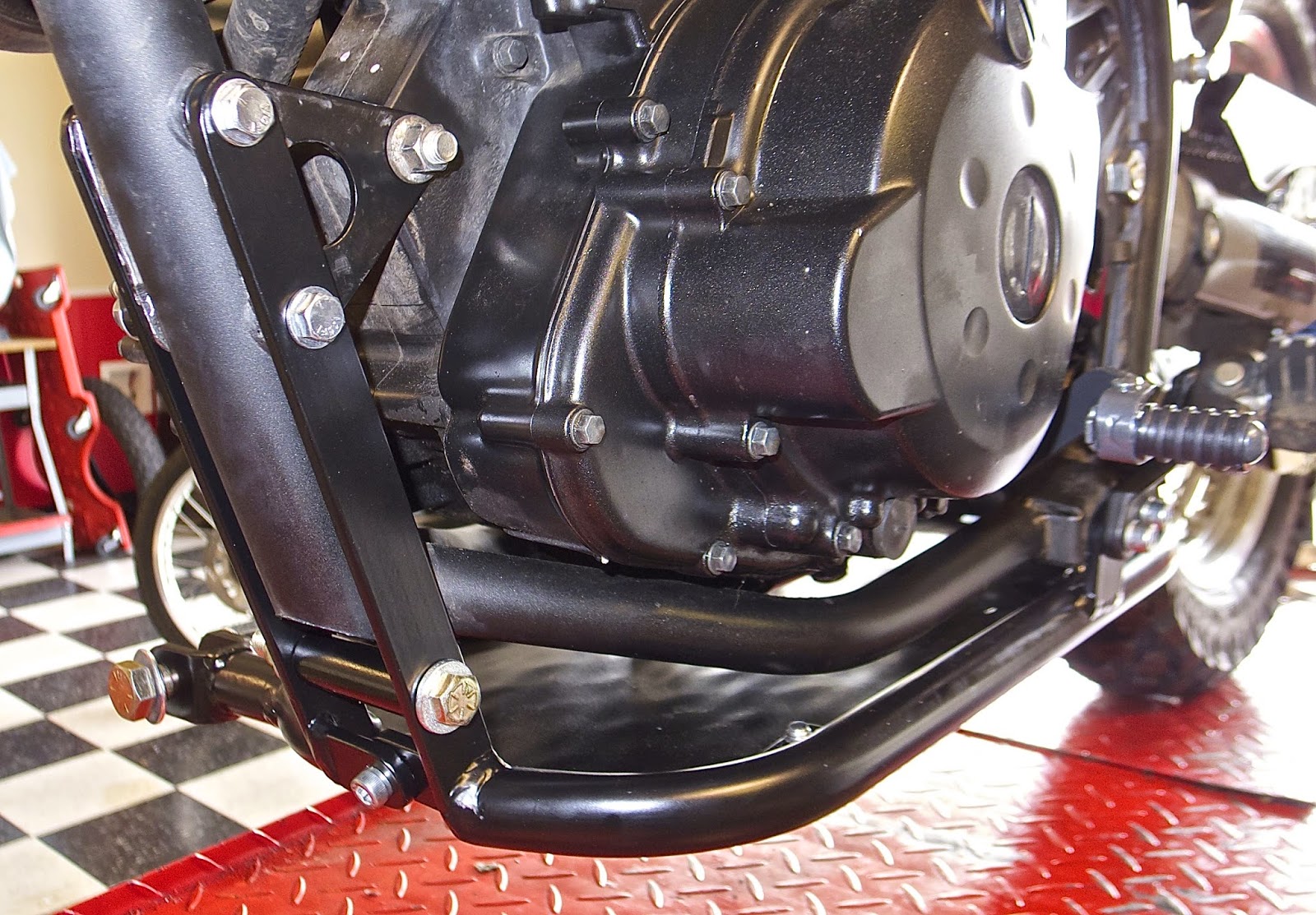 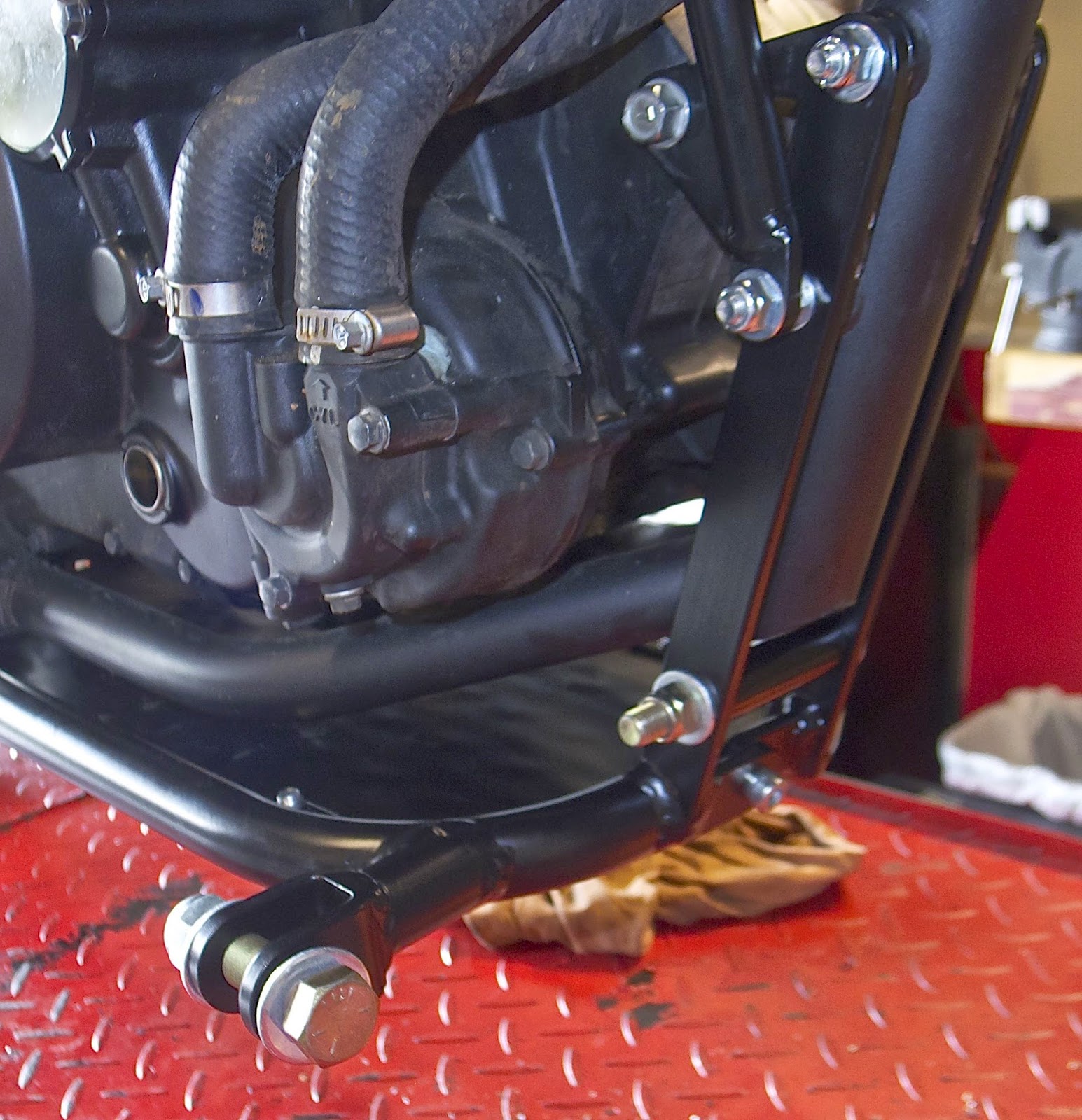 As is the rear lower mounting bolt. You can see at the top of this photo, where the rear brake master cylinder now has a double banjo bolt mount so both the rear and the sidecar disk brakes can be activated with one foot pedal. 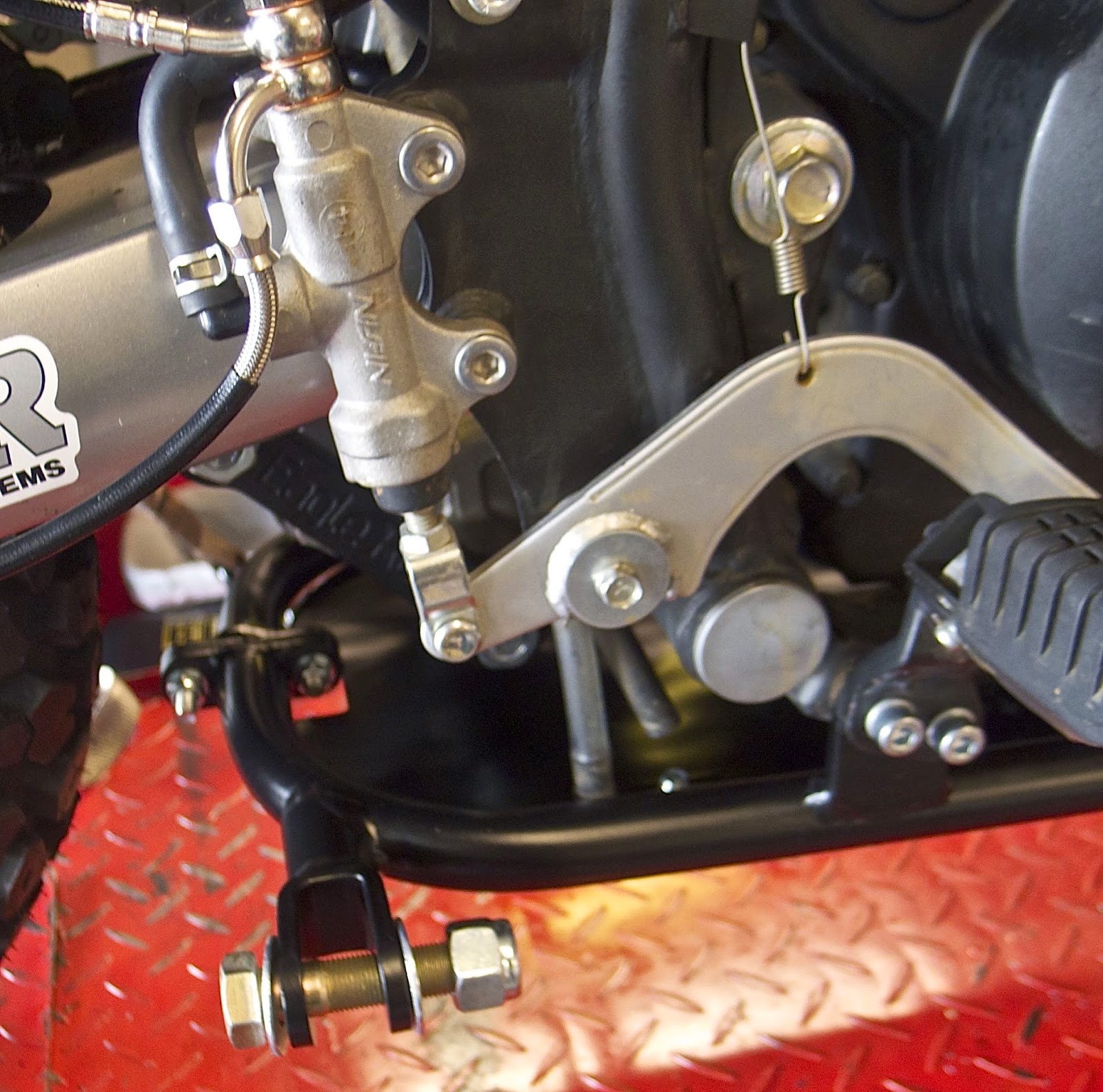 Now to mount the two upper brackets. This is when the decision to buy from an experienced and well respected sidecar builder was confirmed. The engineering that went into the design and fabrication the upper front bracket is impressive. Because this is the bracket that must handle the bulk of the stresses put on a sidecar rig, it must be sturdy and well engineered. The area to mount this bracket is limited and requires several contortions in order to thread the piece in and around the various engine and frame components in order to fit. In all  it is mounted using three connecting points, two braces and six bolts. 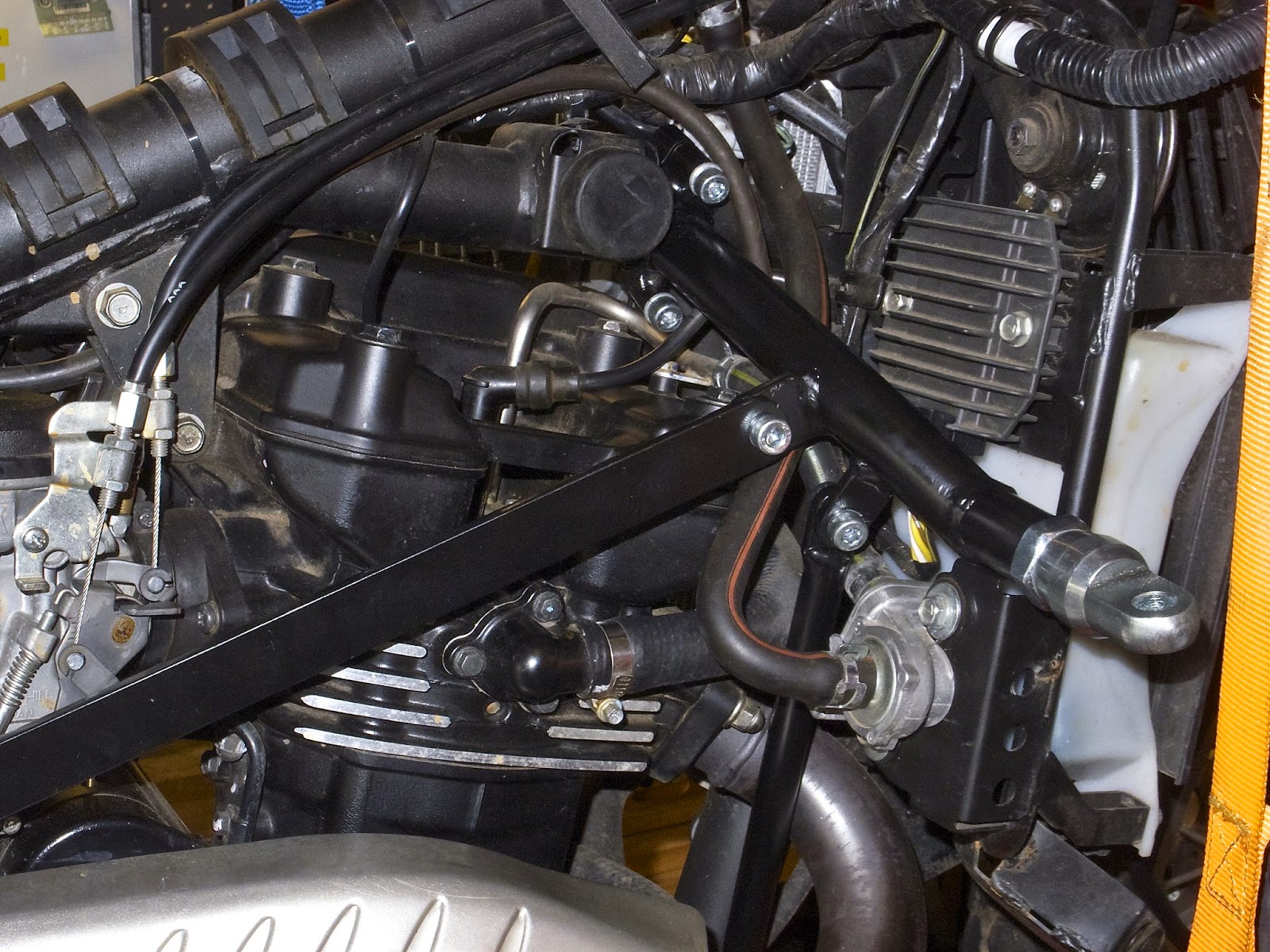 The upper rear bracket was more straight forward, an easy install to the reinforced rear subframe. 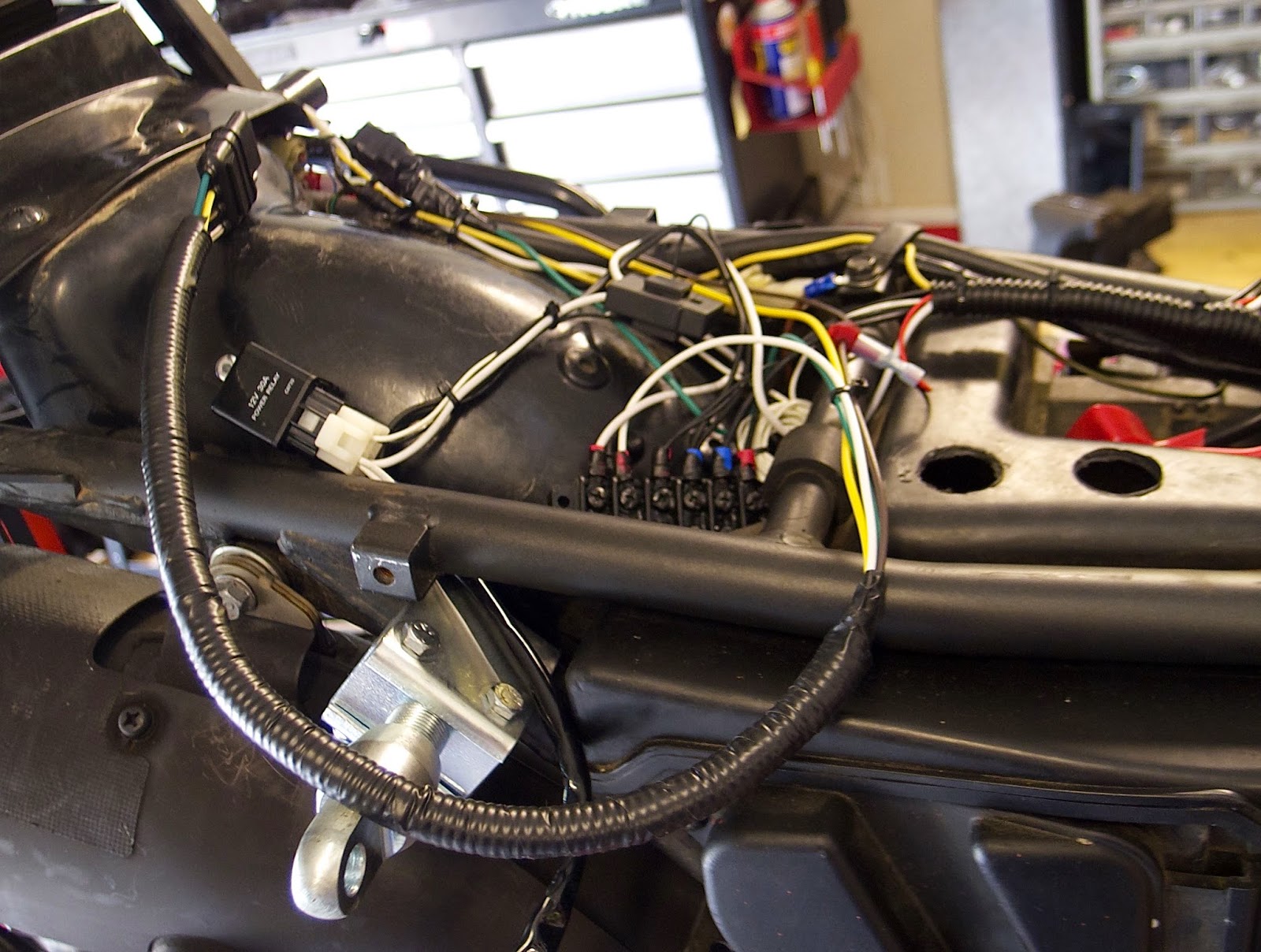 While waiting for the chassis to arrive, more wiring was completed for the sidecar and the driving lights.

The bike is ready to be mated to the sidecar, but we are missing a couple of pieces. So before  we can start that process, we wait and do our tax return.....  Oh the joy! 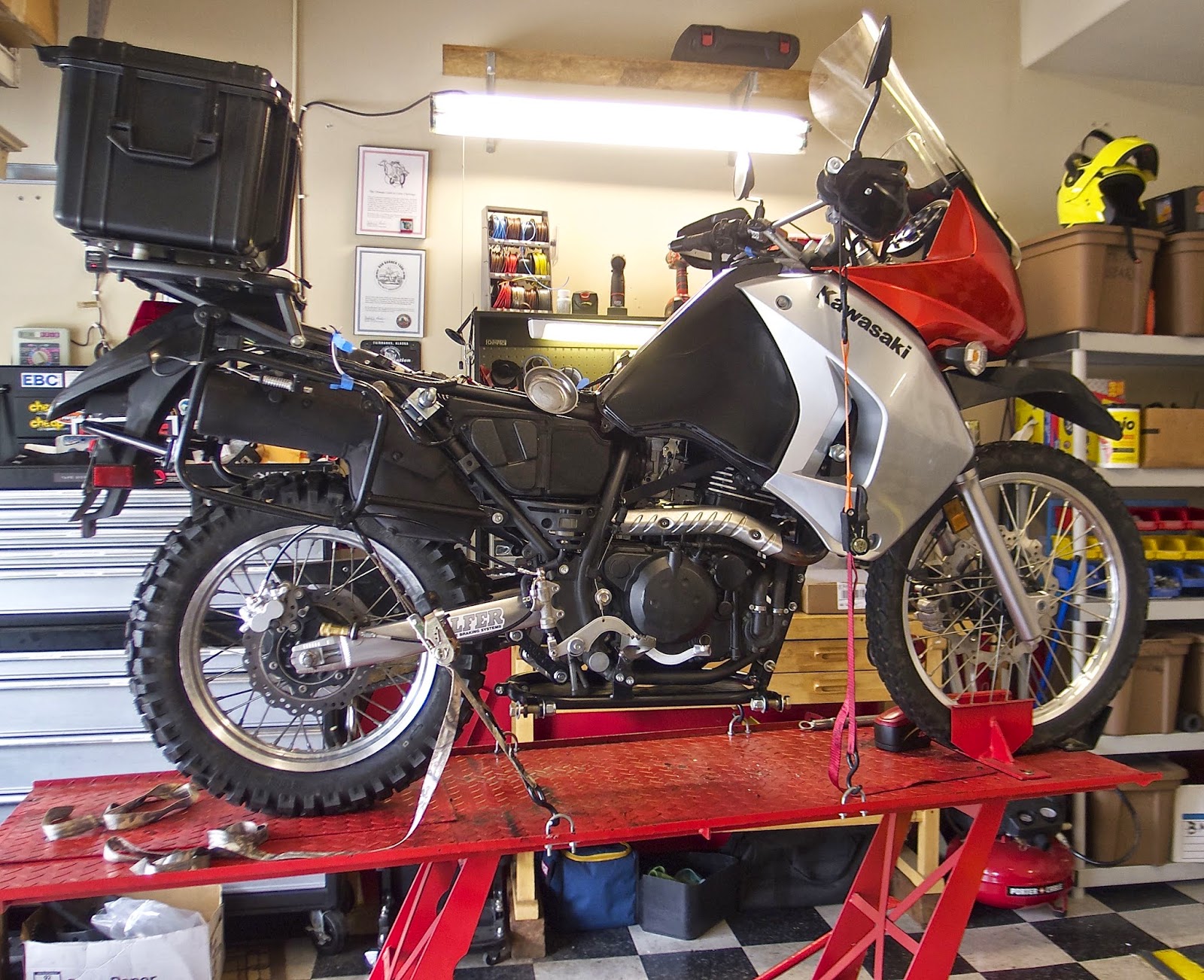 Before you ask where the sidecar body is.... there is not passenger body for this rig. It will outfitted with an aluminum truck tool box where all my gear, tools, parts and camping stuff can be safely stored.

When the last of the parts arrived, the mating process will commence.