The KLR gets married

The time has come for the KLR and the sidecar chassis to be joined for evermore. The last few items needed have arrived, so a quick call to my friend/neighbor Gary was in order.  Since this was the first time for either of us to install a sidecar, we read the instructions,  reread them then watched a youtube video on how to do it. 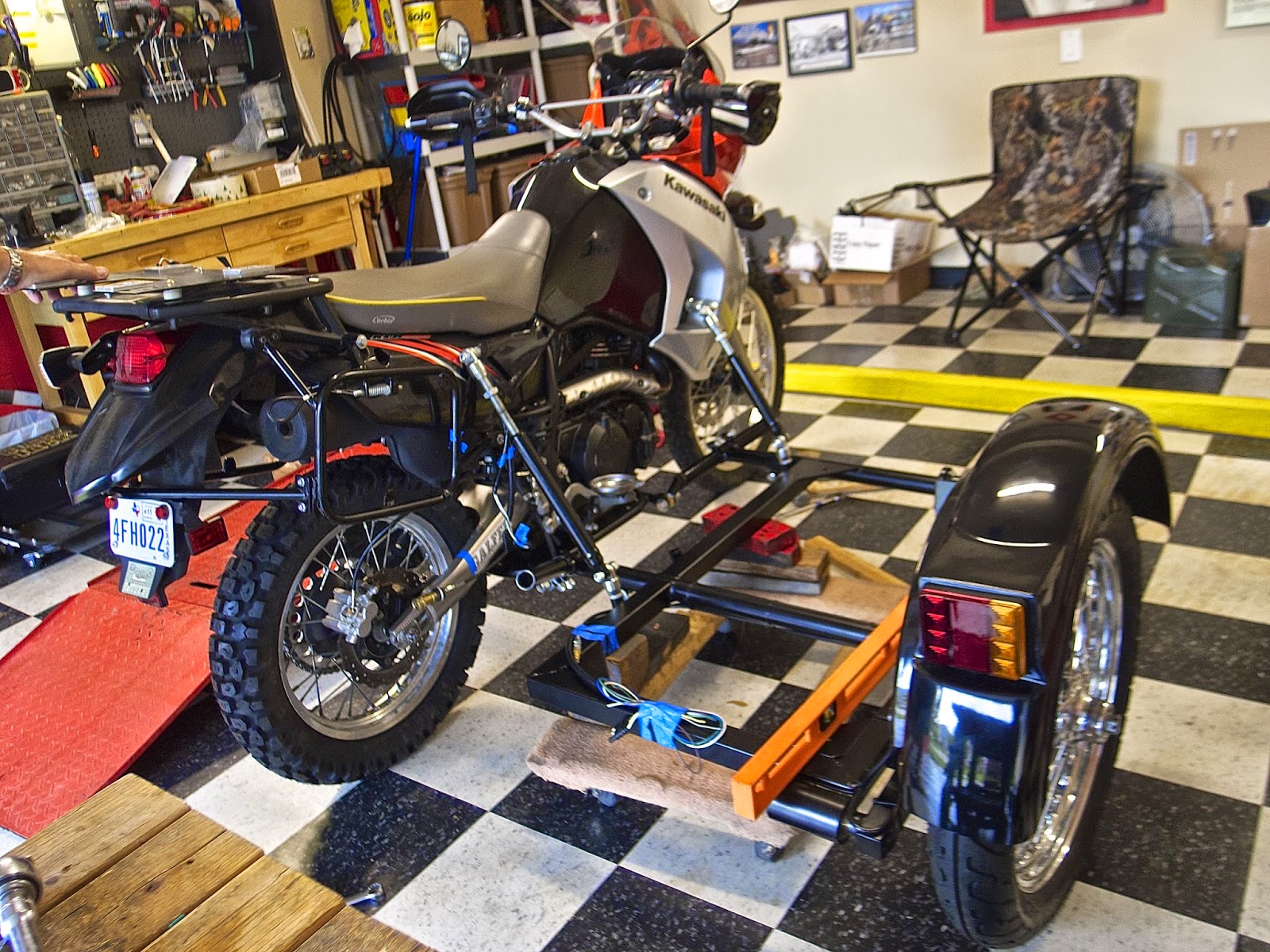 Of course it helps to have a big hammer on hand.
If that doesn't work, the Russians say you need a bigger hammer. 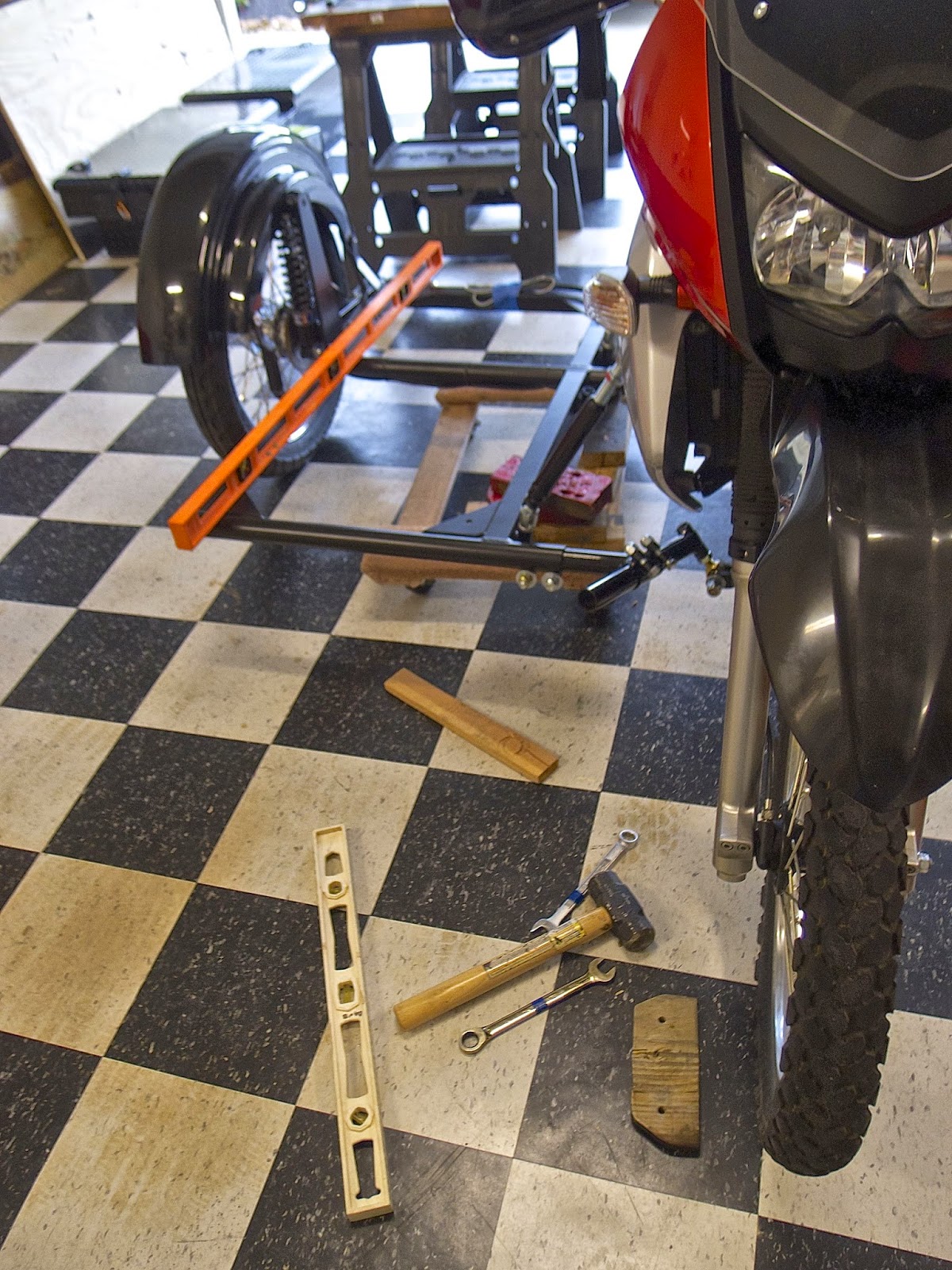 It is critical that the sidecar be level, so we did out best to accomplish that. Two other critical factors are the Lean-out and Toe-in.  Those terms only mean something to fellow sidecarists and they know to what I refer. 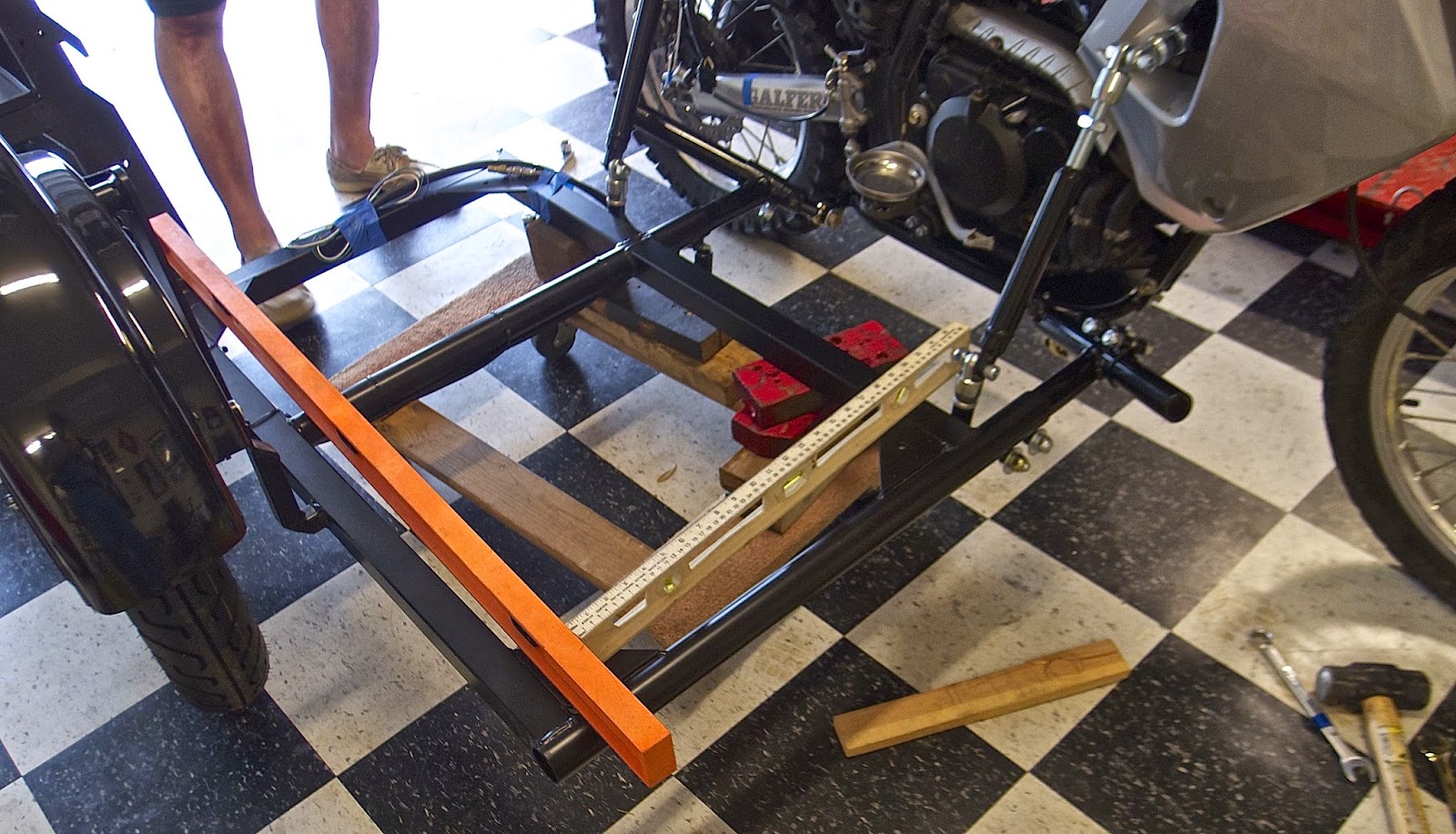 Every step of the way was measured and leveled. 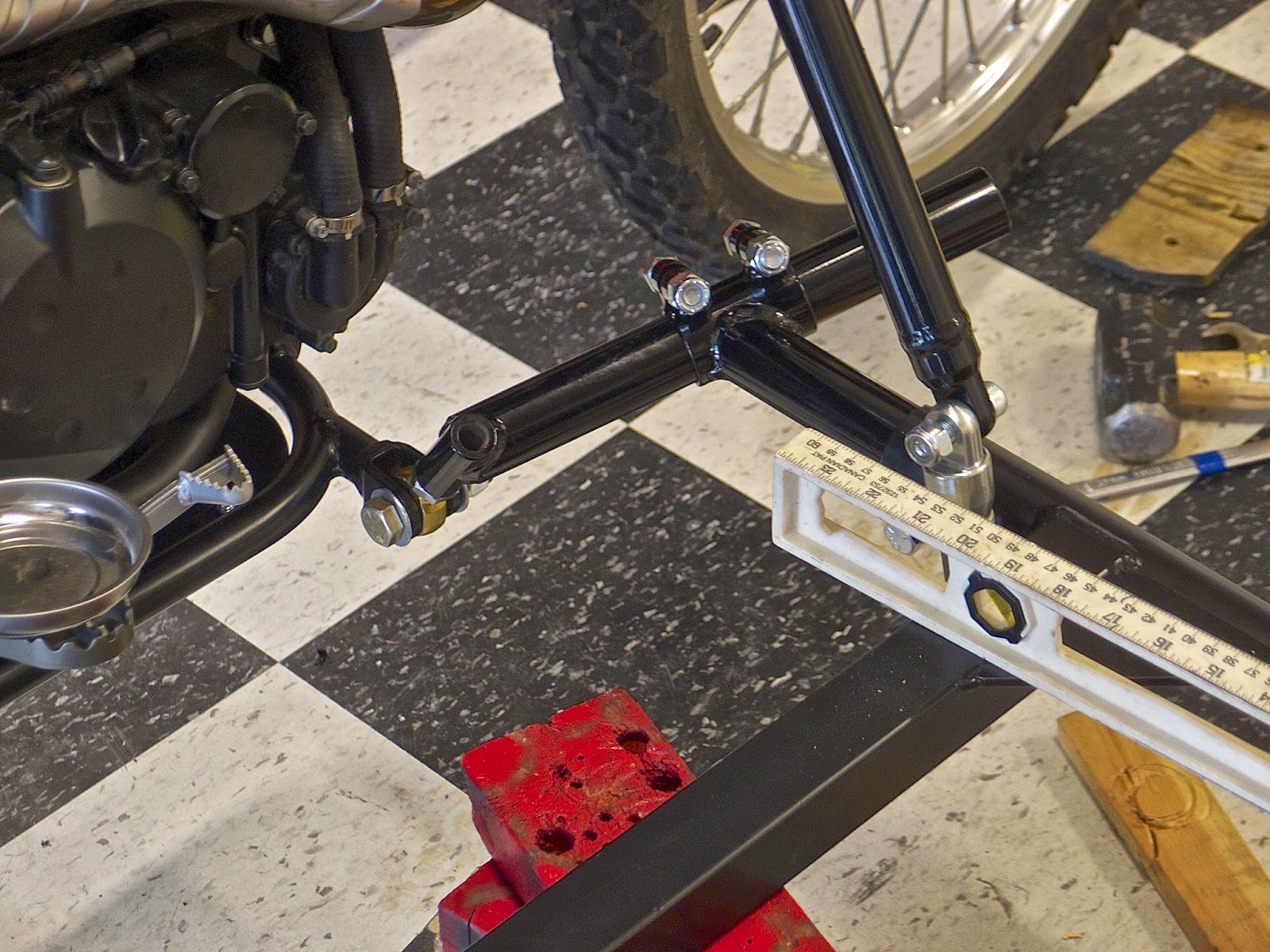 Three hours later, we finally had it attached and level. Bolts are tight, but not wrenched!!! for now. 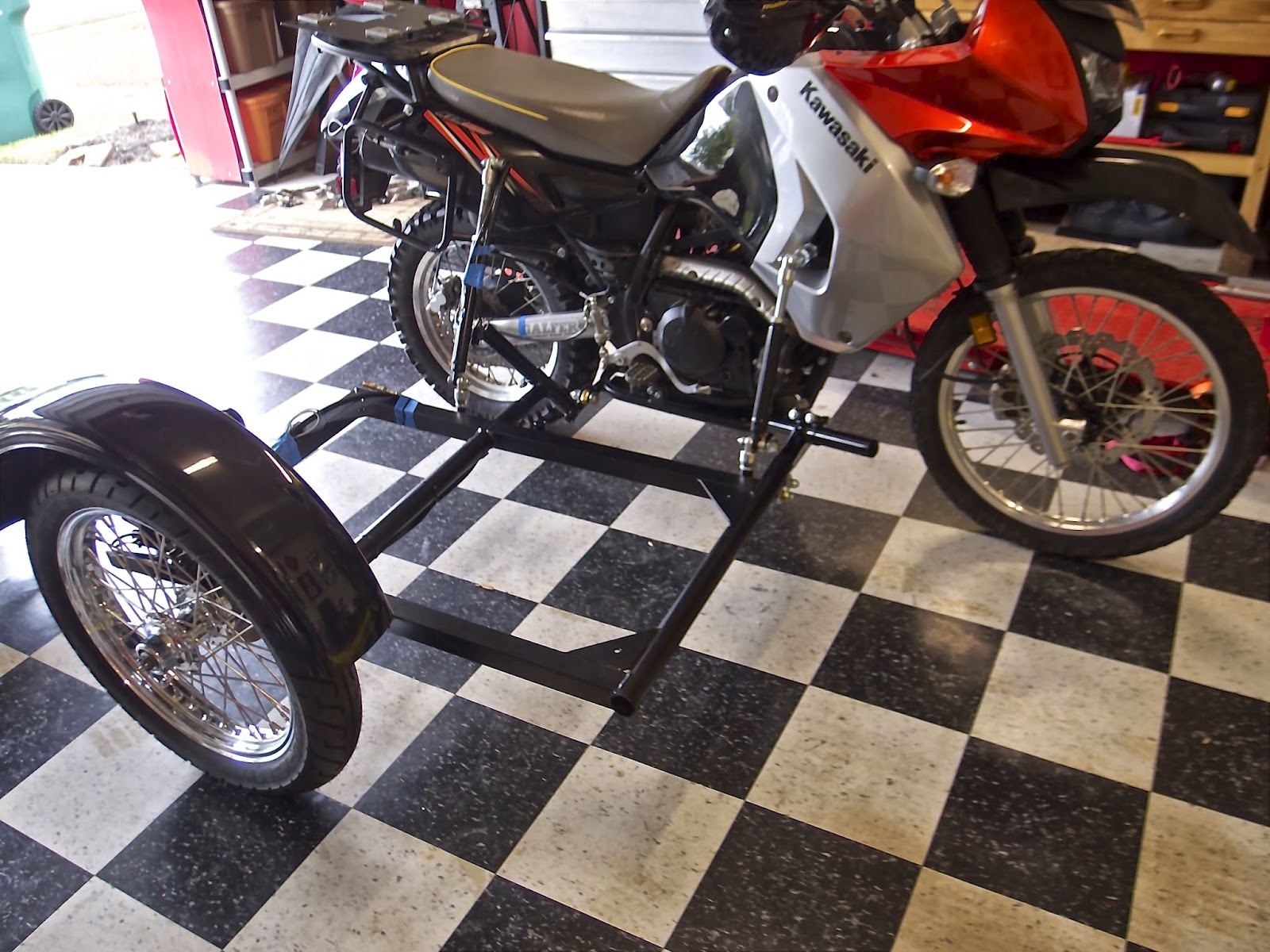 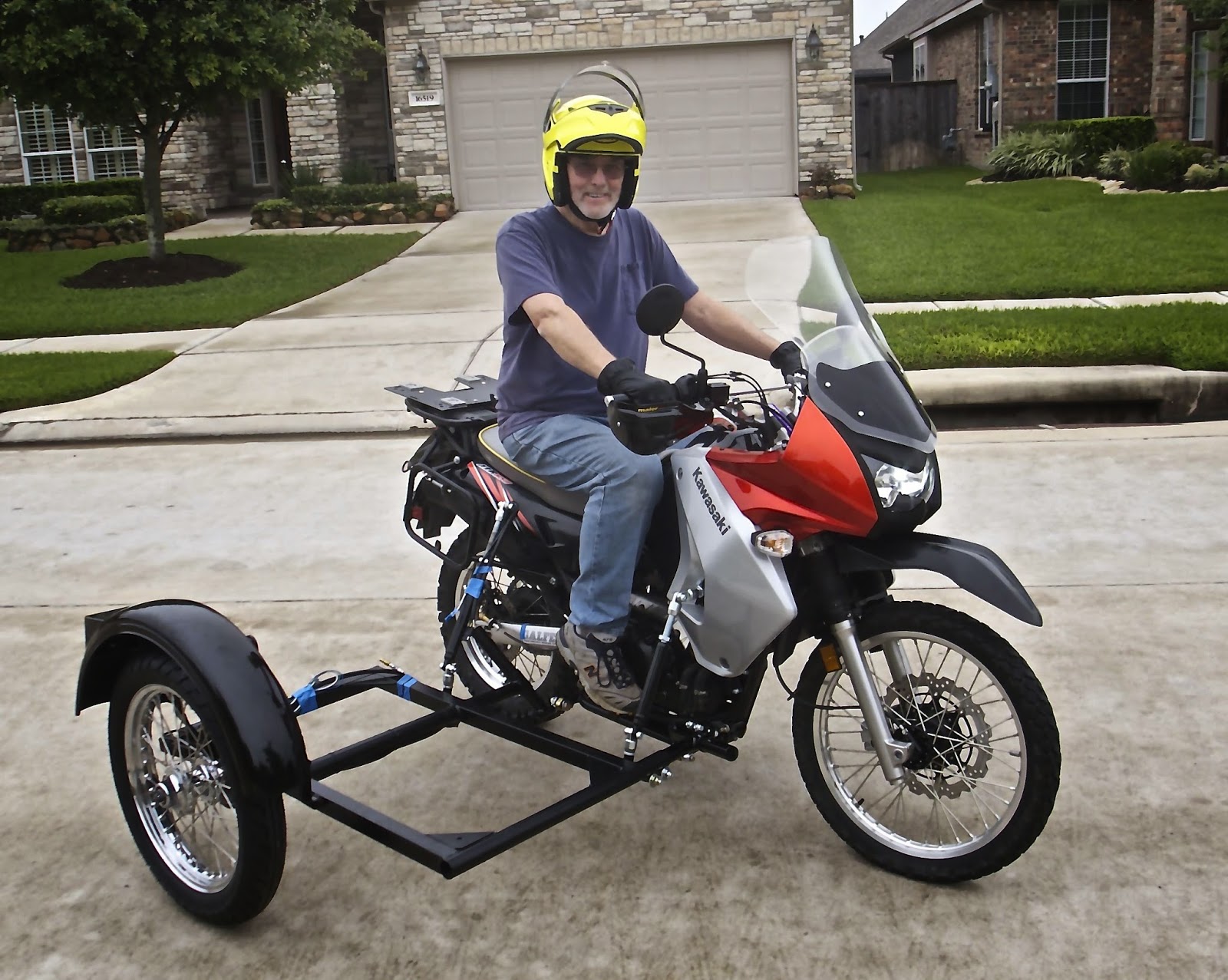 Any experienced sidecarist will cringe at this photo. That empty, light frame will "FLY' with the slightest input..... and it did. This was a quick ride down the street and back to see if the settings were close or needed more adjustment.  Everything was GOOD! No further adjustments for now. Wow, first timers, first time and we are very close to a final set-up. The temporary blue tape is holding wires, etc out of the way while we were assembling the parts.


Now to add some weight to the sidecar. The used truck tool box I picked up is a double lid, aluminum  box that we then modified by adding rubber latches to make sure the wind did not catch a lid and flip it up. Second we added hasps for locking and securing the lids after we removed the factory latches.  This will keep my camping and personal gear safe and dry.

Because the bottom of the aluminum box is not very rigid and not wide enough to cover all of the sidecar frame, decided to cut out a 3/4" plywood base for the sidecar then mount the box and auxiliary gas cans on top of that.

With the plywood down, we then positioned the box and base fore and aft. Did not want to box to be further back than our rear taillight. The front edge of the box is in line with the front axle. 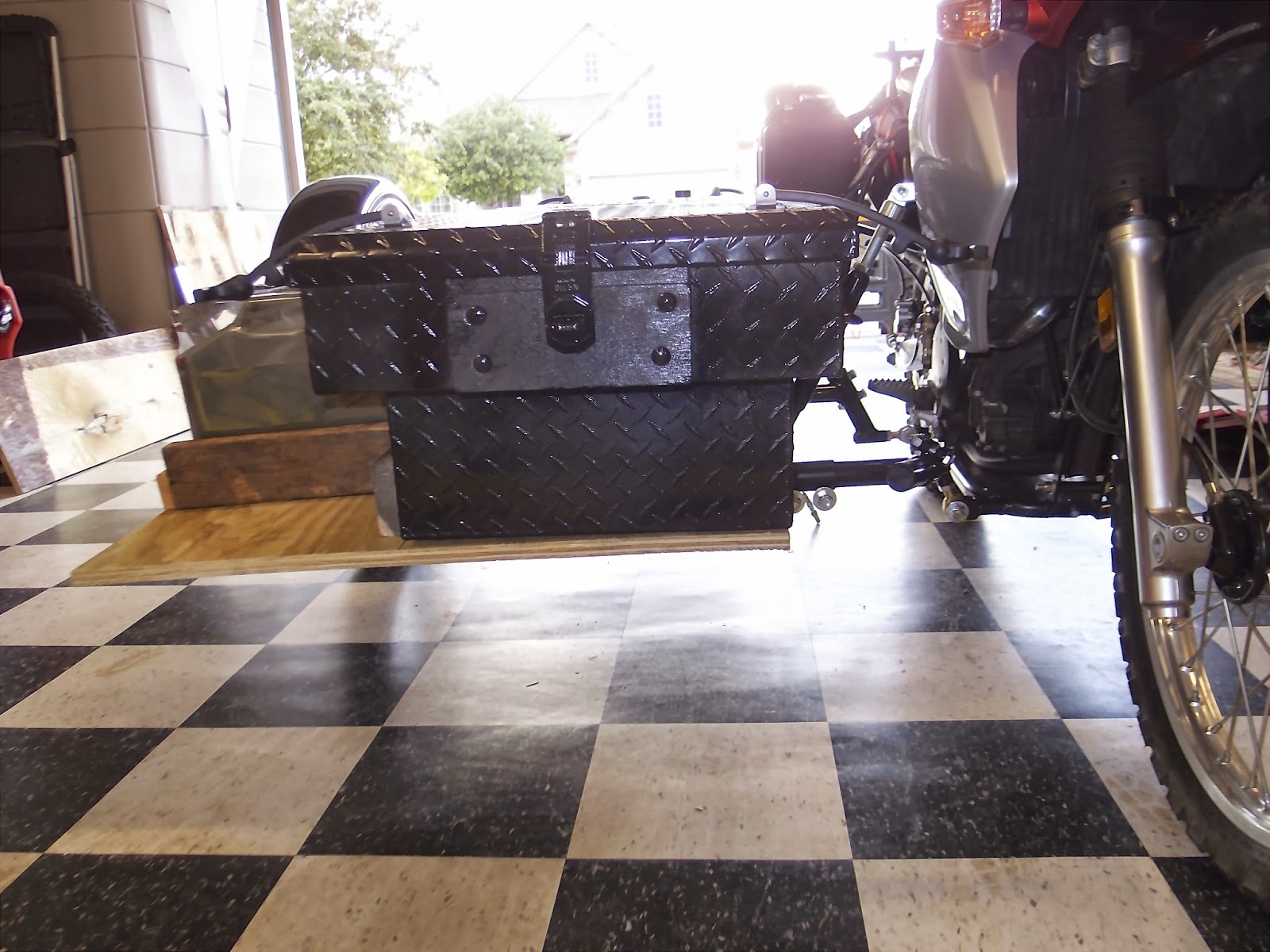 Lined up the rear fender with the tool box... The front edge of the box lines up with the front axle on the KLR. 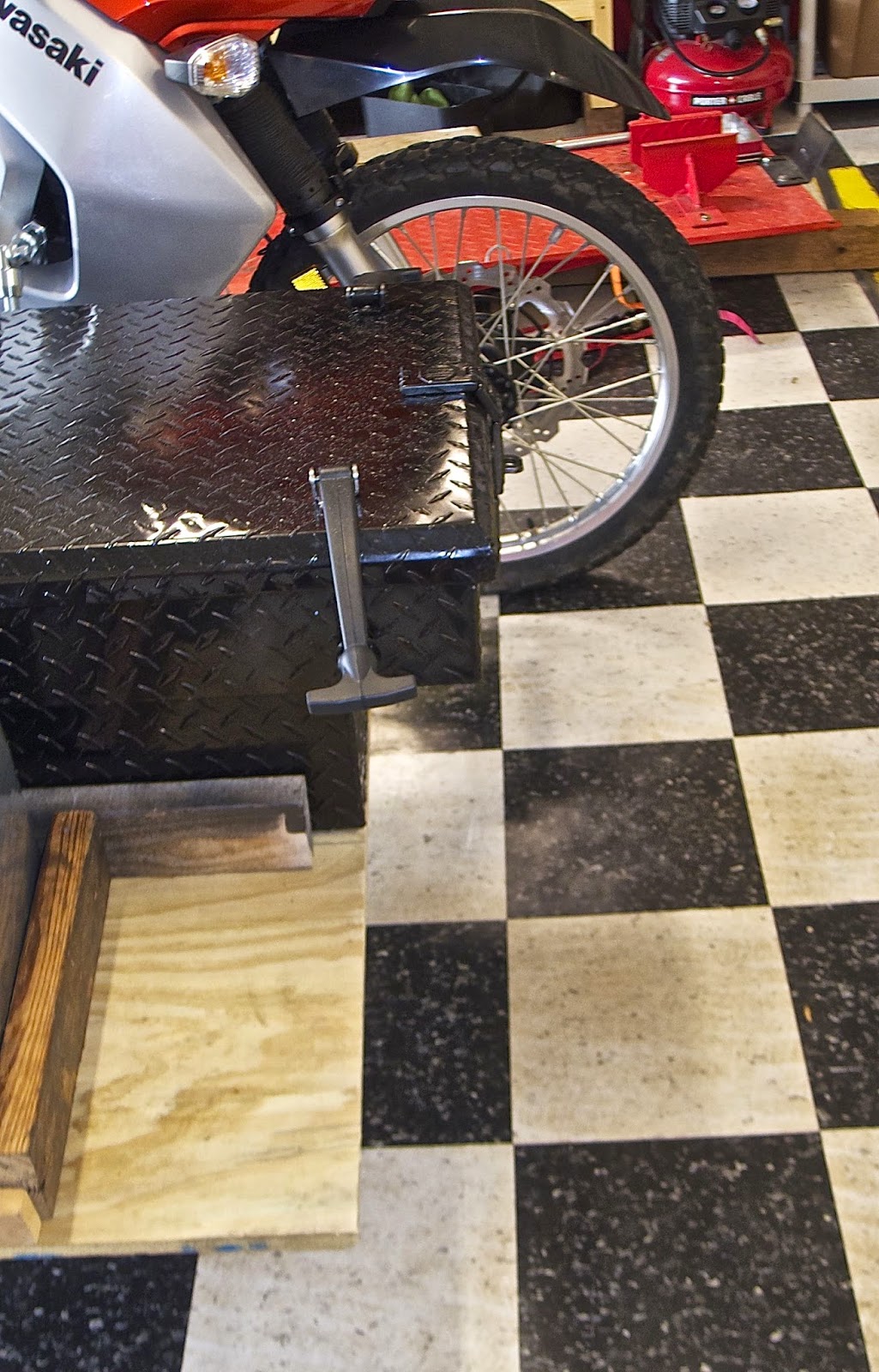 Next was to cut the plywood, trim it, stain it and attach everything. Added metal edging to the front and rear edges of the plywood for weather protection. The box and base were then bolted to the chassis.

Between the bottom of the plywood and the ground is 12 inches. That is the ground clearance I was looking for and could not find on any already set-up adventure sidecar rig.  The ground clearance under the KLR is 7 1/2 inches.
Am pleased with the high ground clearance and a low profile front of the sidecar. Will offer less wind resistance. It rolls very easy. Much easier than Da'mit the Ural did. 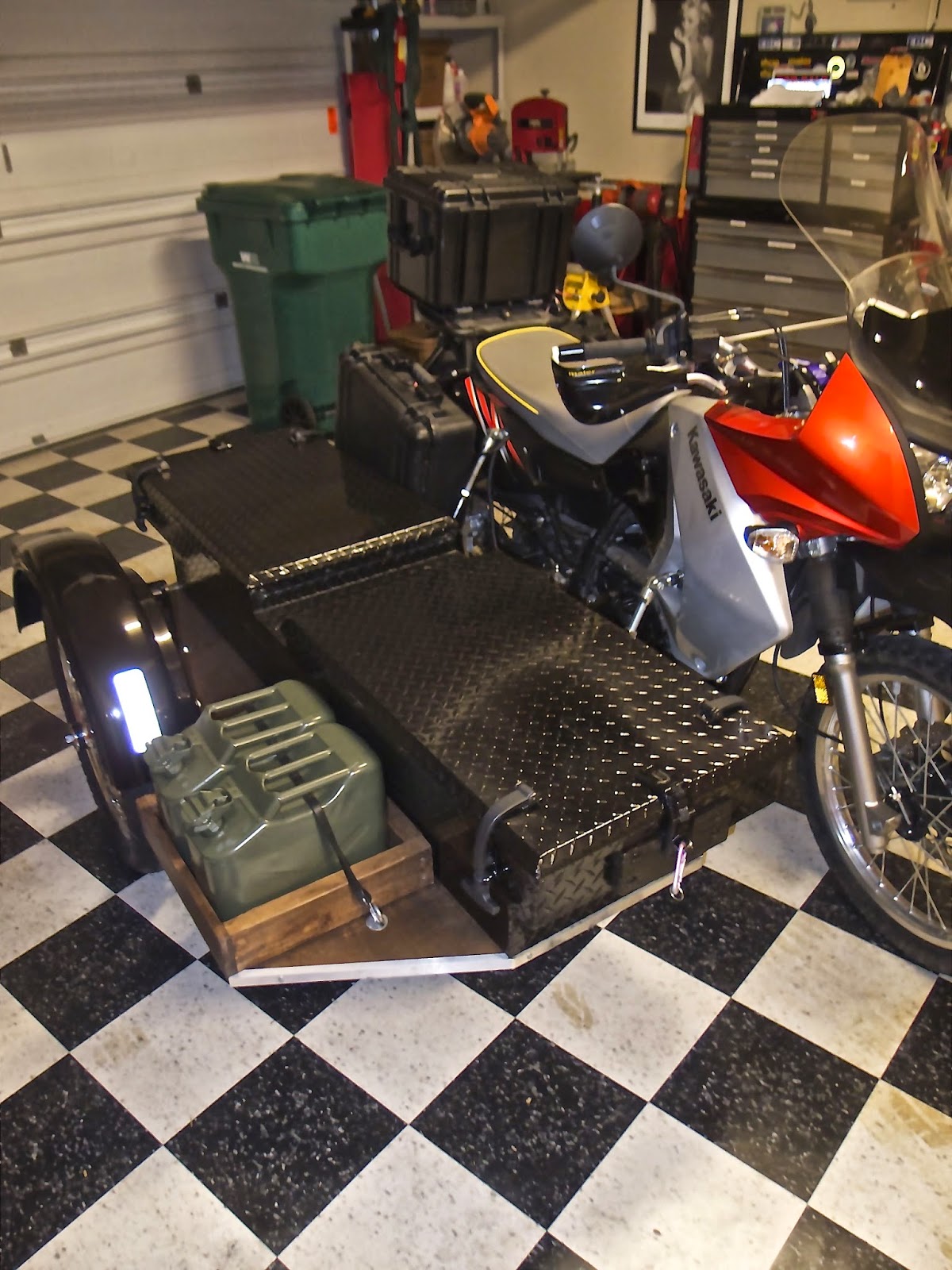 Made a frame to hold in the two NATO gas cans, 2.5 gallons each. That will give me a total of 11-12+ gallons of gas.  Will add a bicycle cable lock besides the bungee cord to keep the two gas cans. safely on board. There are several nooks and crannies where more things can be mounted to the sidecar floor. Any suggestions? 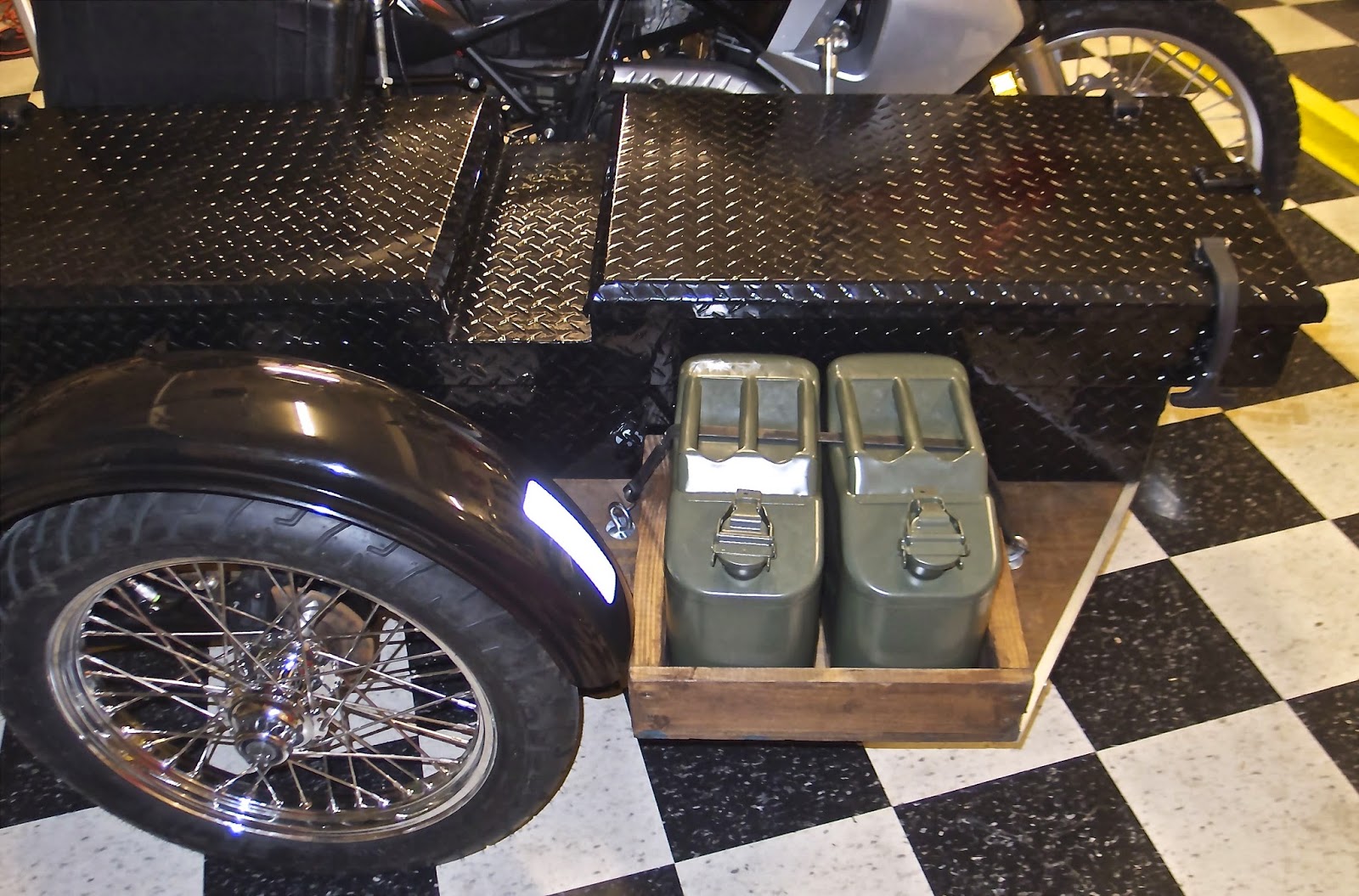 Like most complicated projects, some unforeseen developments arise.  For us, the used Pelican panniers that I bought from another KLR rider, fit on perfectly. The right pannier can be mounted and removed easily. However, with the sidecar cargo box in place, the right pannier cannot open. If it was a top opening box, would be okay, but a side opening box is not going to work. The tool box opens fine, just the pannier cannot fully open. 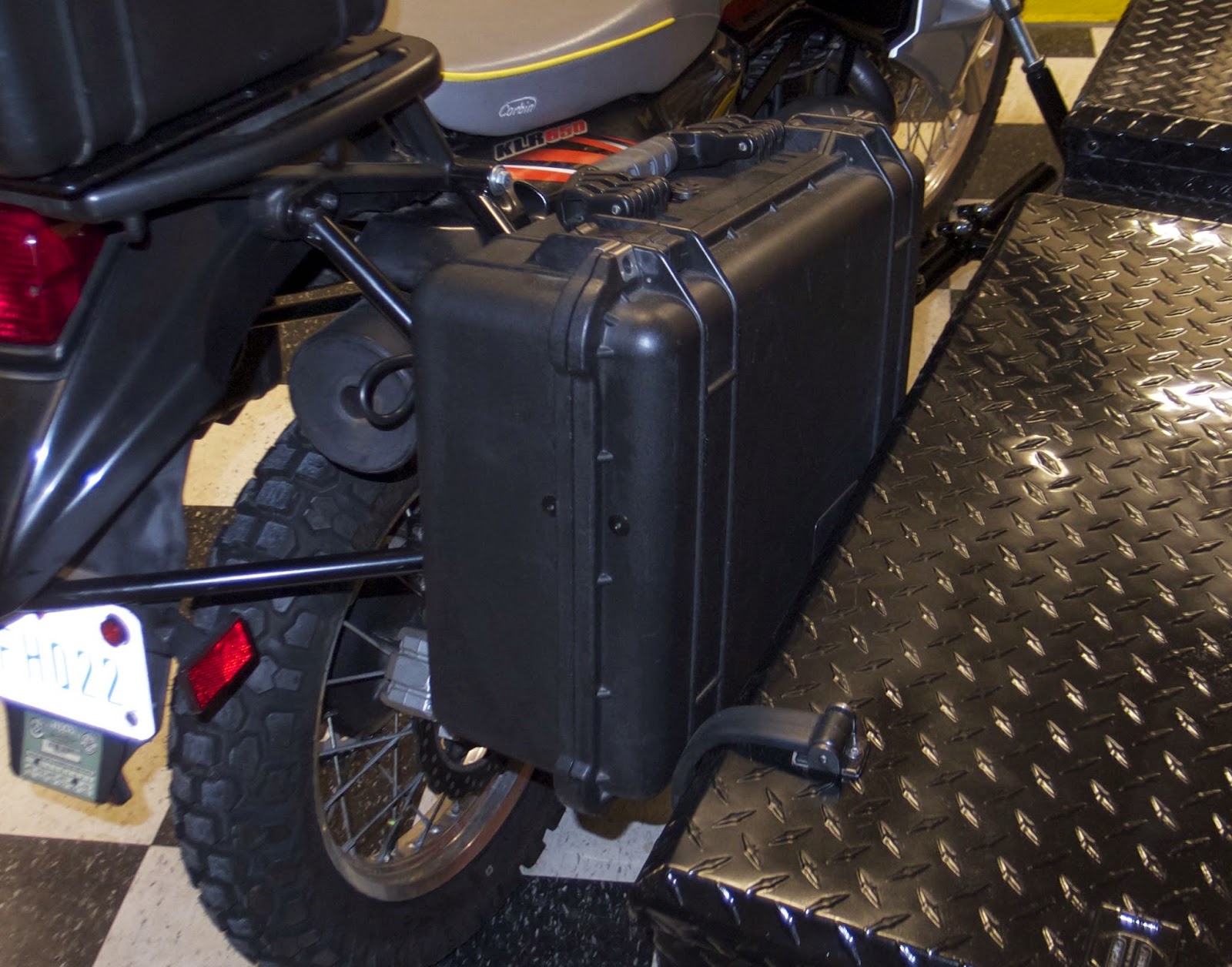 Now the decision is, do I ride with just the left pannier, use the right pannier knowing I can only access the contents if I remove it from the bike everytime or sell this set up and find a complete pannier set up of top load boxes? Do I even need panniers with the big tool box?

Of course there are more, MANY more things yet to be done before this rig is ready for long distance travel. Today was a major step in moving this project forward.

Thanks for following along with this build.