Had to visit Surfer's Beach while in Todos Santos. Grabbed a few photos before riding back to San Jose del Cabo to meet up for the trip north.
Riding the four kilometers of soft sand out to the beach my first thought on arriving was,
this will be interesting.

Brought out the telephoto lens to capture the surfers, there were about a dozen or more actual surfers in the water. Another dozen were relaxing on the beach. Waves were high enough for them to get up on their boards. 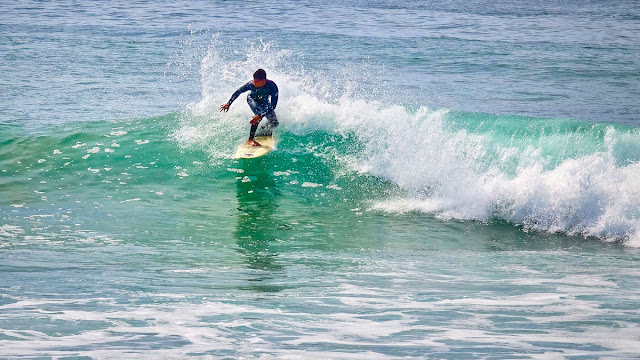 Like any group, some were more experienced than others 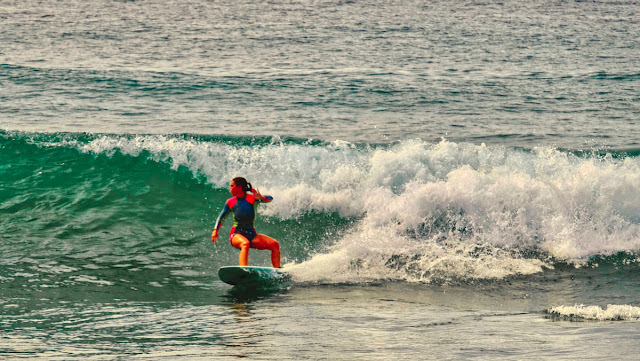 I loved the expressions on this guy's face as he rode the waves. 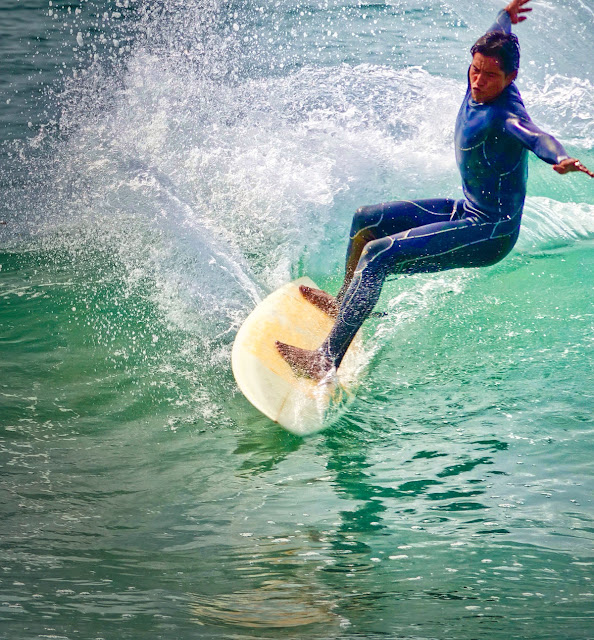 And this guy really got his mind into the game...
a split second later, he was in the water. 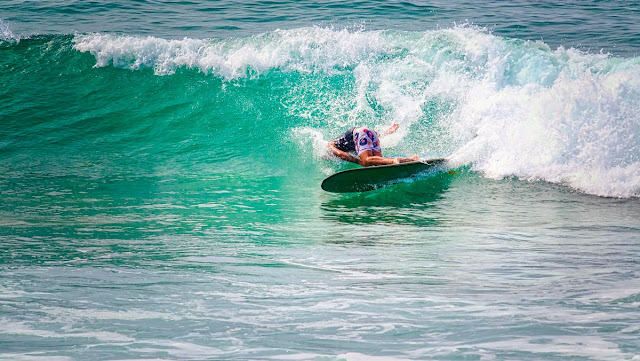 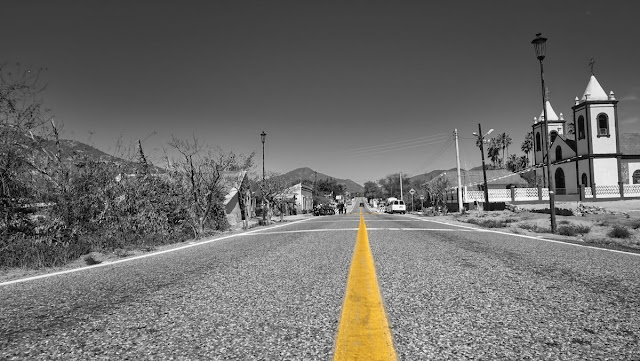 Of course I went walking and talking with townspeople as I always do.
The local church was locked tight. A local told me someone had been stealing from the pauper's box so they decided to close except for when the priest in there. That's once a week, or depending on when he shows up.
Seems to be some tension between the church and the towns people here. Across from the church is the town library. It was closed. I asked which days is was open. Enrique told me a visiting priest claimed the library books belonged to the church, so he had them boxed up and took them in the middle of the night. Now there are no books in the library, why open?
He said the priest also tried to claim that the library building belonged to the church, but the townspeople protested that. Soon a new priest was making the irregular weekly visits. 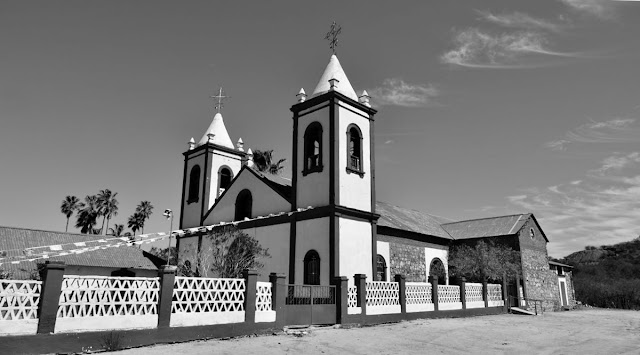 Earlier I saw this abandoned building, but today there was a soccer ball lying out front.
Thought the juxtaposition was ironic. Looking inside, it does not appear anyone lives here. 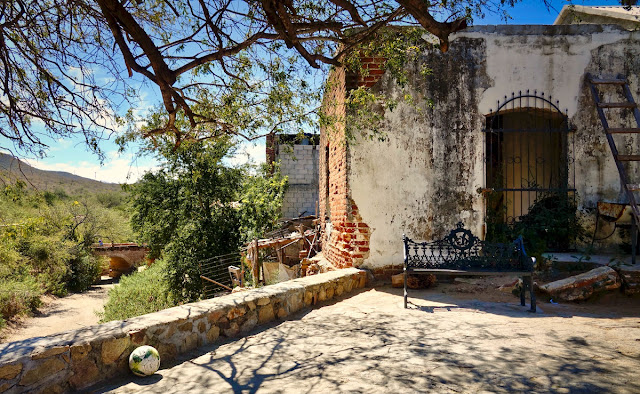 And some things just catch one's attention and make you wonder....
...like what might be behind a door propped open with a rock? Why is it open?
For whom does the rock wait?
Wanted to look inside but decided best not to. 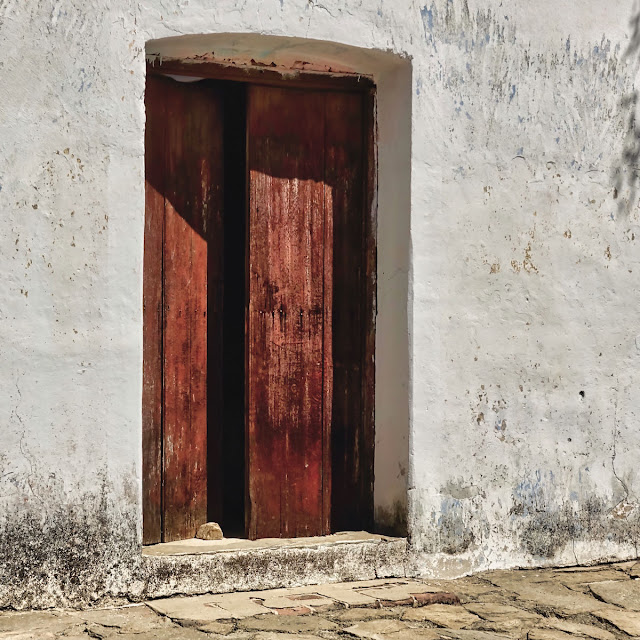 The local street cleaners were out doing their routine this morning.
A broom, a shovel and a wheelbarrow, let's go. The town of El Triunfo is very clean. Great job guys. 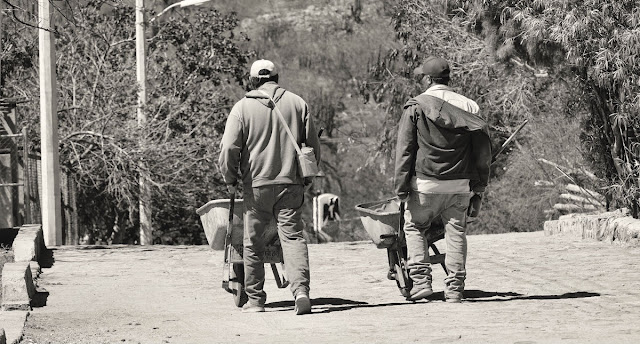 Talked a while with Ramon. Said he was born in 1946, still hauls, de-barks and sells the mesquite to steak restaurants. He educated me on the different types of mesquite wood used for smoking meats.
For those who do not know, mesquite is a very dense, hardwood that burns slow with an even temperature and flavorful smoke. Ideal for premium cuts of beef.
What is not shown here are all the mesquite thorns and stickers. Mesquite is found in the Southwest US and central Mexico deserts.
Have also seen furniture made from  mesquite, has a reddish core and beige outer layer.  Is very durable. 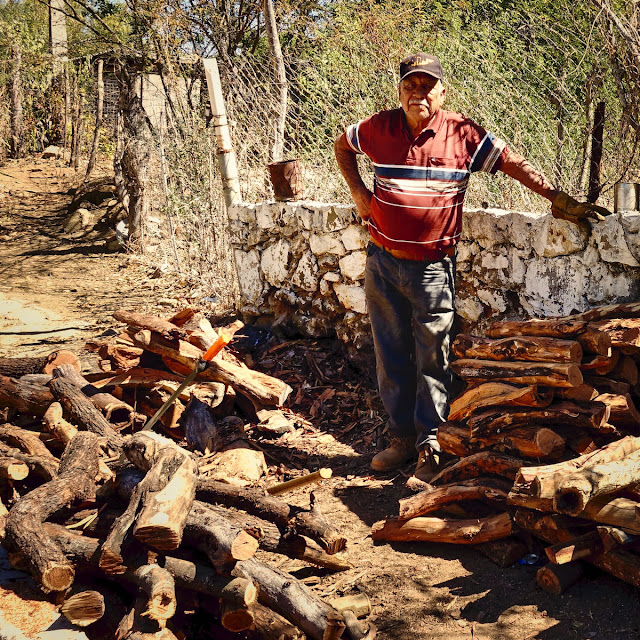 The next coupe of days we'll be riding north with limited internet.
But the camera works, so photos will be taken.
Ride safe, ride far my friends,
CCjon