Leaving San Sebastian in the early morning, we arrive in Burgos, Spain.
Only stopping long enough to see the cathedral and grab a quick bite of lunch.
An open air table awaits... 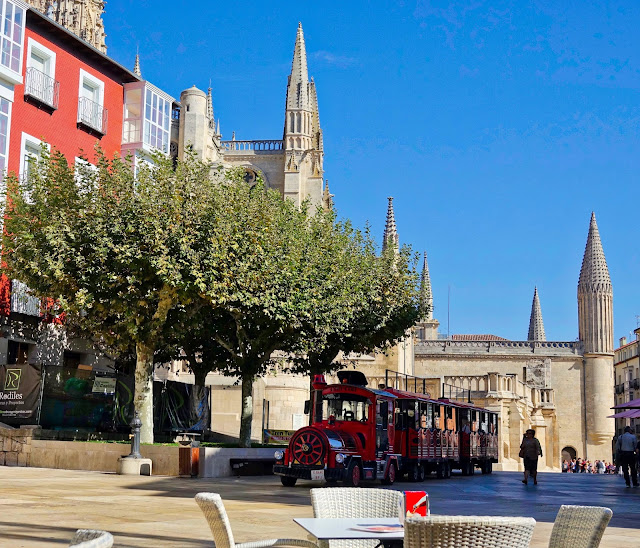 Our waiter was quick to bring the caña, vino, spicy olives, bread and salchica (sausage). 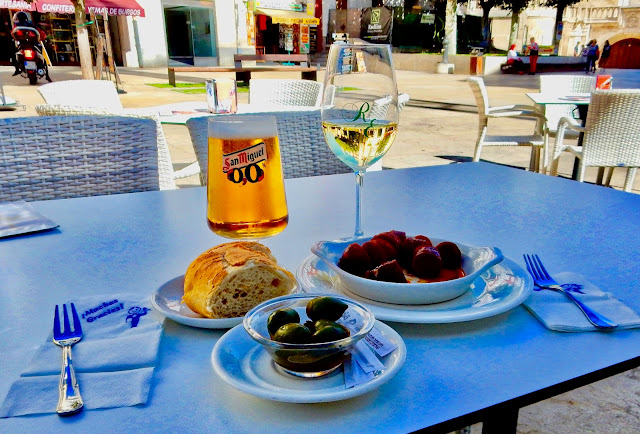 Fall has arrived in Burgos too. 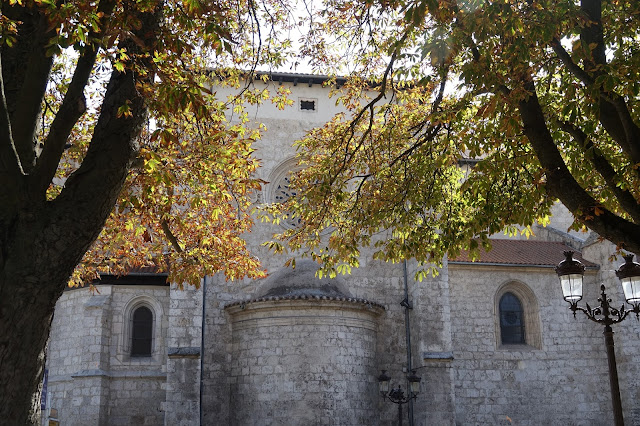 By late afternoon we are in Madrid, the capital of Spain, with just enough time to visit the oldest building in Madrid before sunset.

Ironically the oldest building is not from Spain, but from Egypt. The Debod Temple was a gift to Spain from the Egyptian government when they were relocating ancient temples and ruins that would be flooded once the Aswar Dam project was completed in the 1960's. If not moved out of the flood zone, they would have been covered by the rising water and lost from view forever.

Spain agreed to accept this gift for their help during the dam construction.
The officials created a new park for it on a ridge not far from the royal palace. 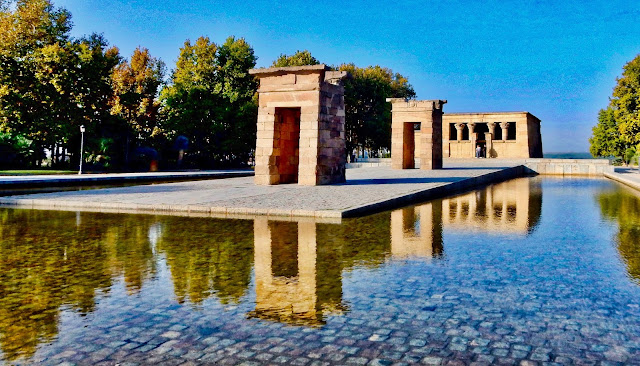 Early the next morning we are out and about. The weather is cool in the early morning as we stroll down to the Plaza de España where Madrid's most famous statue stands. 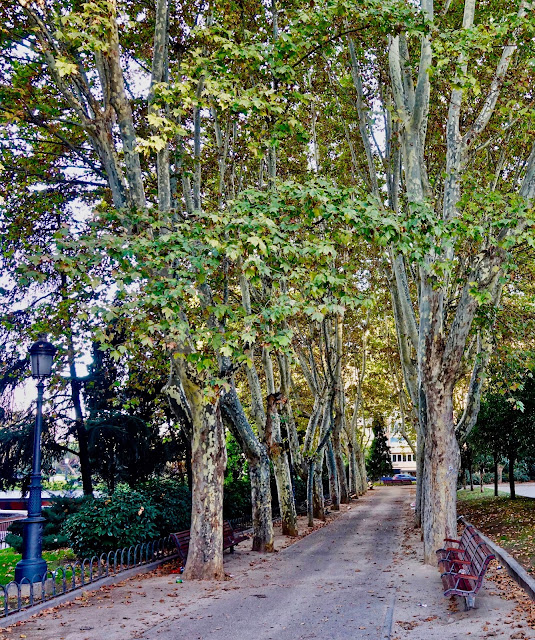 Don Quijote (Quixote in English) with his faithful squire, Sancho Panza, stand immortalized under the watchful eye their creator, Miguel de Cervantes. They guide says Cervantes' novel (Spanish: El Ingenioso Hidalgo Don Quijote de la Mancha ) has been translated into more languages than any other book in history, except for the Bible and Harry Potter.

"Into the dark woods, Sancho. Marcela must be saved from the pastoral clichés." 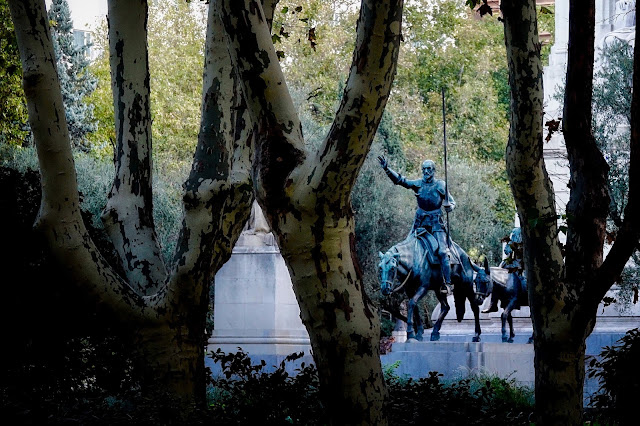 Don Quijote's mind wanders in and out of reality as he wishes to live in an age of chivalry, honor, conquest and defending fair maidens. Woven thru the stories are his quests to right the wrongs his mist filled mind perceives, all in the honor of the lovely maiden Dulcinea. 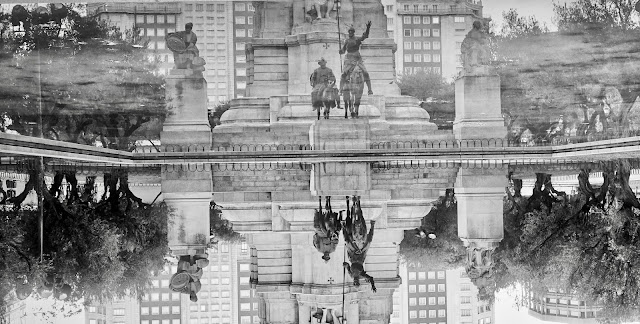 At sunrise,  a solitary nun walks past the headquarters of Spain's Army. 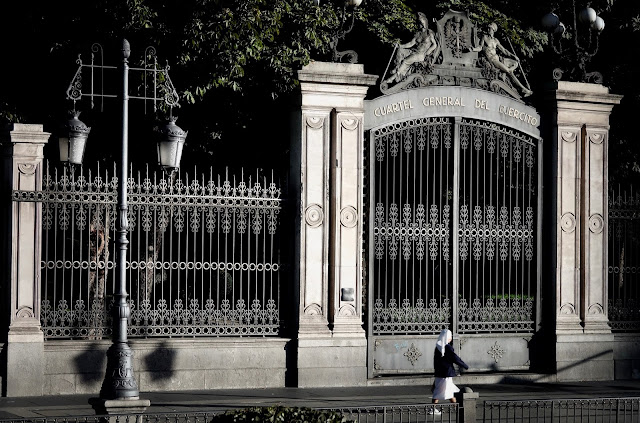 One of the city gates of Madrid, Puerta de Alcala' 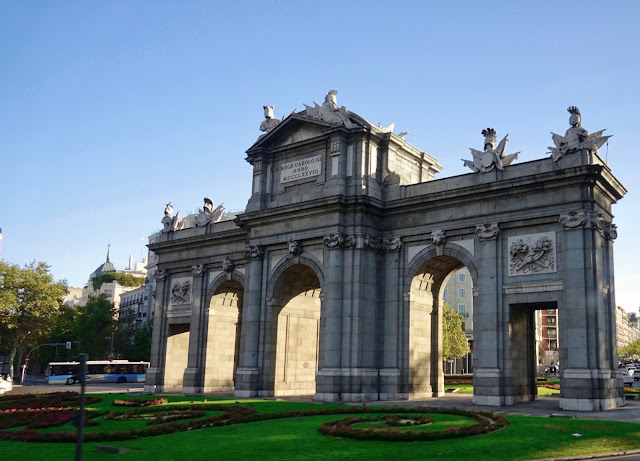 Toledo is one of my favorite cities in Spain to visit, the history, the architecture, the culture.
The first written reference to Toledo was in a Roman document dated more than 180 years BC.

For hundred of years Muslims, Christian and Jews peacefully lived together in Toledo. In the city centre, houses in the old Jewish quarter are still occupied today, though now there are no Jews living in Toledo.  General Fransico Franco, the Spanish dictator in the 1940's, aligned himself with Germany and Italy during World War II. 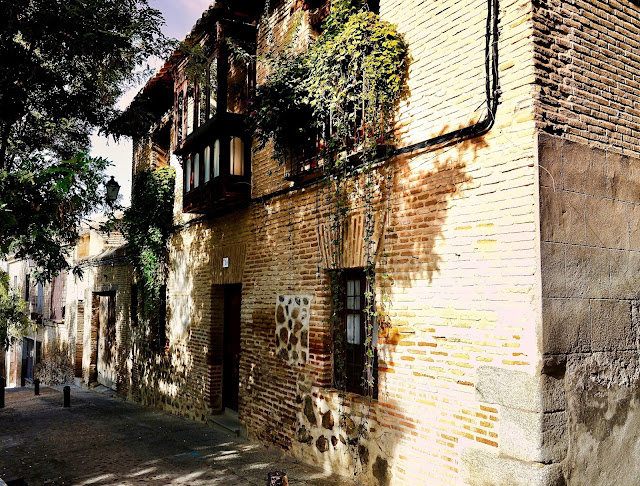 As a people very proud of their heritage and history, the city of Toledo erected a statue to Don Juan de Padilla who, over 500 years ago, resisted efforts of a Spanish King to remove control of Toledo away from the local residents. Padilla lost his head for resisting the King.

Toledo, the former capital of Spain, was a strategic center for the production of military swords, spears and armor during the middle ages. Toledo metal smiths were acknowledged as some of the best of their time.

Due to its strategic location, high on a hill surrounded on three sides by the Tagus River, Toledo was attacked numerous times over the centuries, but usually with little success. Thus the city centre remains today as it has been for many centuries.

There were several outposts across the river from the main city fortifications to help defend the city centre. You can see how the defenders could easily spot any approaching armies. 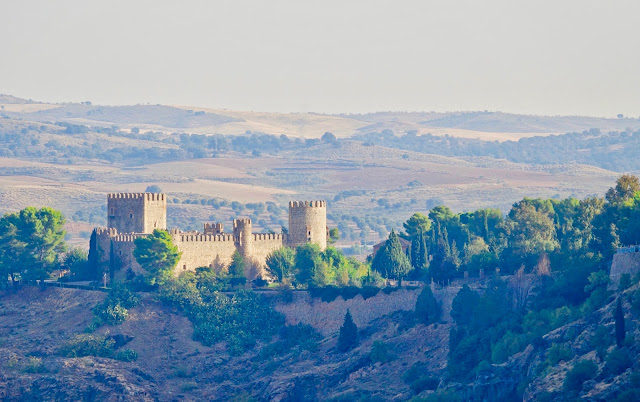 The few bridges that did lead into the city were easy to defend.  The river prevented any heavy armored soldiers from crossing. For those attackers who swam across without armor, they were easy prey to the arrows flung down from the high city walls. 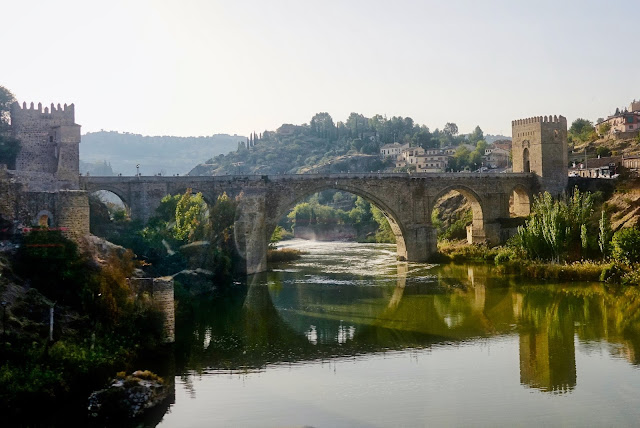 Thus ends our time in Spain. Tonight we dine with friends, tomorrow we fly home to Texas.
Hope you enjoyed the sights as much as we did wandering around Europe.

Until the next horizon ride, Abrazos mis amigos,