We arrive more than a little apprehensive about the political situation in the Catalan area of Spain which includes Barcelona. History is being made here right now as the local Catalan government is holding a vote to secede from Spain. The Spanish government in Madrid has declared the vote illegal and therefore void.  Luckily we did not encounter any of the street demonstrations that have been going on for weeks.


Barcelona is the second largest city in Spain with over 1.6 million inhabitants and another three million in the surrounding area. Is also the wealthiest city/area of Spain, yet it is a mixture of the new and the old...


The corn stalk broom and a modern vacuum truck work together to keep the streets clean.
Barcelona is a very clean city. 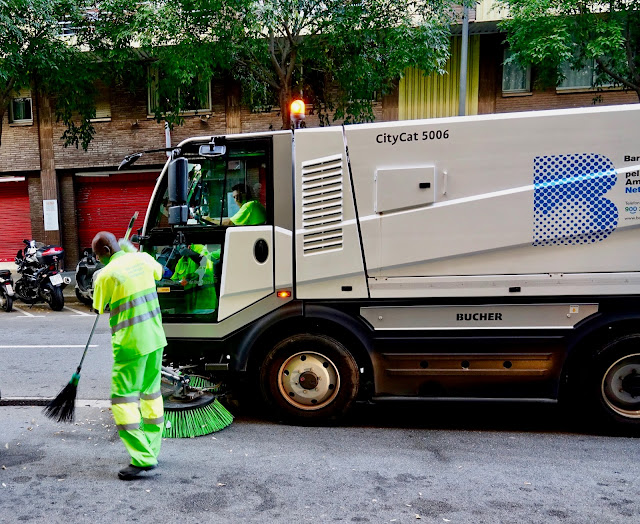 Most tourists with guidebook in hand, immediately flock to the listed tourist sites hoping to catch a quick photo and buy a souvenir. Those sites are always crowded, with over-priced food and drink, and hundred of small shops selling authentic Spanish souvenirs made in China.

I prefer to wander the small narrow side streets, be they new... 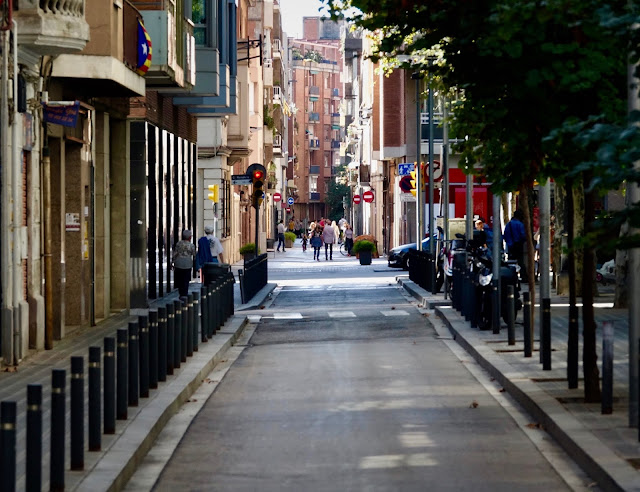 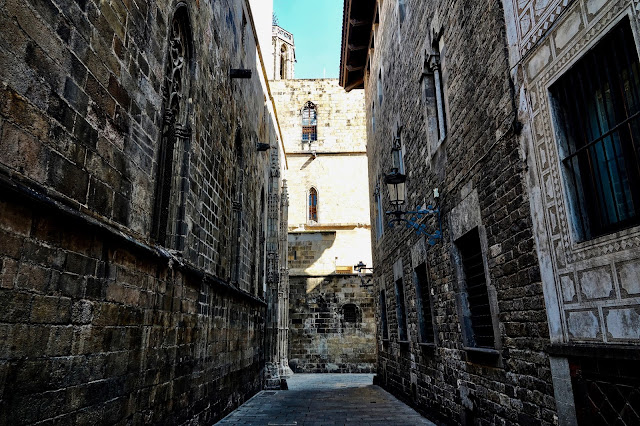 Looking for the personality, character or soul of a place.
Like finding a statue dedicated to the inventor of the to-go coffee cup....lol. 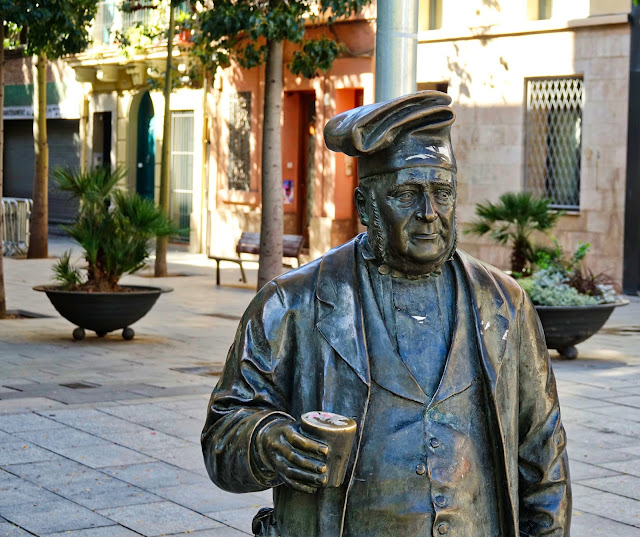 Or happen across a local neighborhood gathering in a small church plaza, where teams are grilling their specialty paella for all to sample while neighbors visit, children run and play. 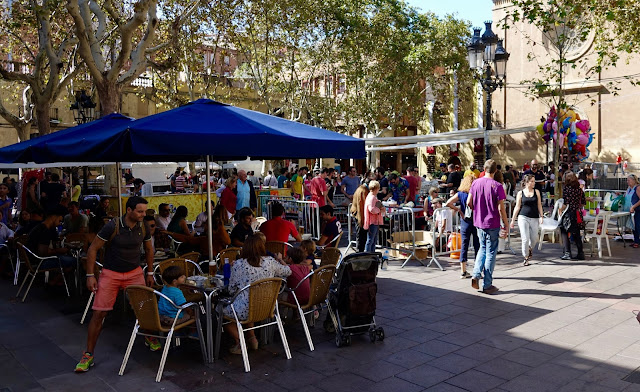 In the souvenir shops they sell a model of the most visited site in all of Barcelona, the Sagrada Familia (Sacred Family) Cathedral designed by the most famous of all Spanish architects, Antoni Gaudi. When Gaudi graduated, the Dean of Architecture declared, Guadi was either a genius or a mad man. 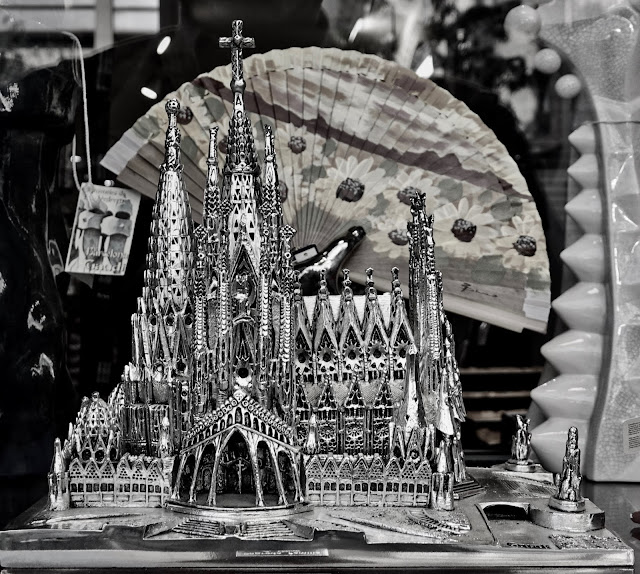 We decide this is a must see in spite of the tourist crowds.
As we walk closer, one can catch small glimpses of the cathedral ahead. 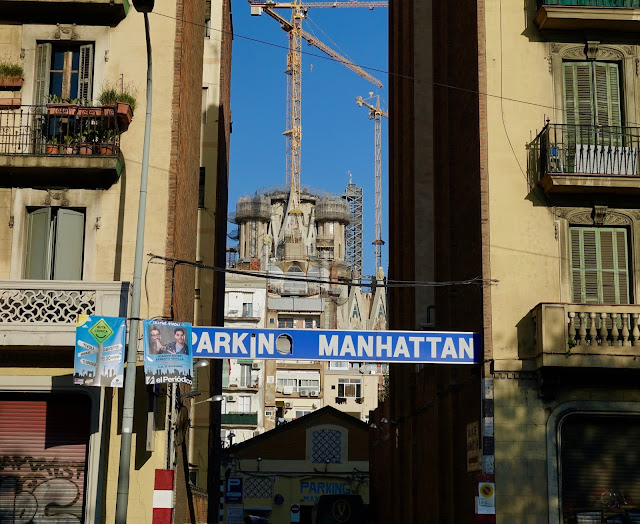 Coming thru the park we can see more and more of it, but why the construction cranes? 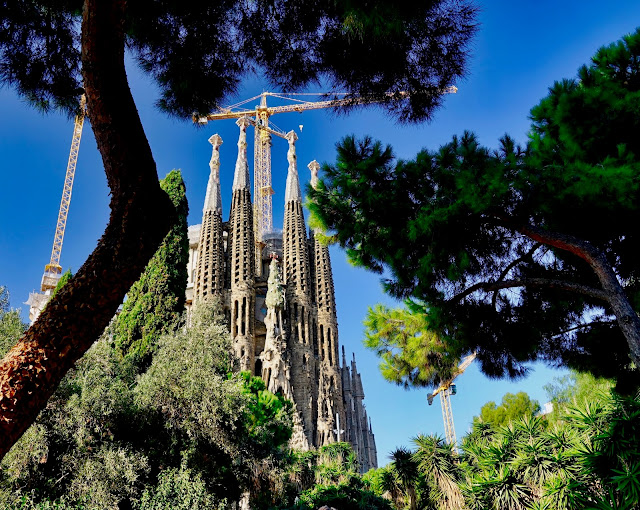 All of the other churches and cathedral we have visited in Europe dating back several centuries or more, were constructed over many many years  Often taking hundreds of years to build. Okay, they did not have the modern construction equipment that we have today so yes, it took longer back then.

The Sagrada Familia Cathedral is still under construction. The scheduled completion date is 2026, but they are not sure it will be ready as the building has been under construction for the past 135 years. The first stone was officially laid in 1882.  Every day hundreds of laborers come here to work with the stone imported from all over the world.

So no one alive has seen the finished building, only the small scale models sold in the tourist shops.  Even then several changes have been made as engineering technology has improved and changes were made to strengthen the structure.

It was only in 2010 that the roof was finally completed. Till then when it rained, visitors got wet.

Once inside, it is not like any other cathedral we have seen. Modern, soaring, lacking in statues of saints and martyrs. Only four statues are in this cathedral: Joseph, father of Jesus. the Virgin Mary, Jesus on the cross and St. George, the patron saint of Barcelona.

Joseph looks down from the right.. 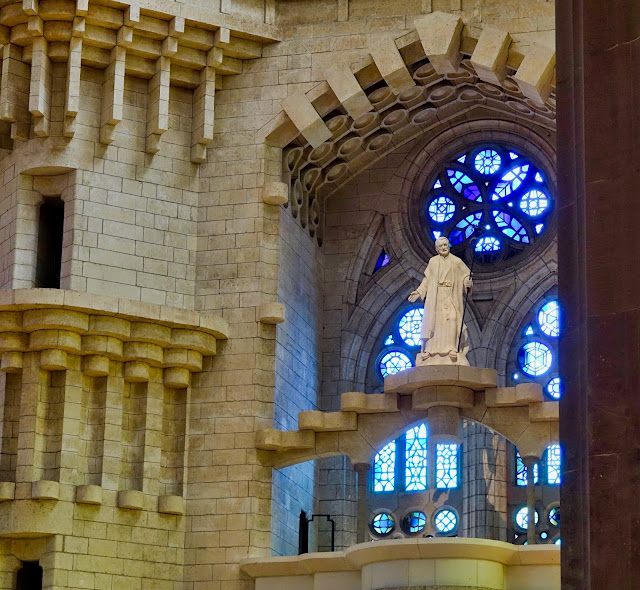 Virgin Mary watches from the left 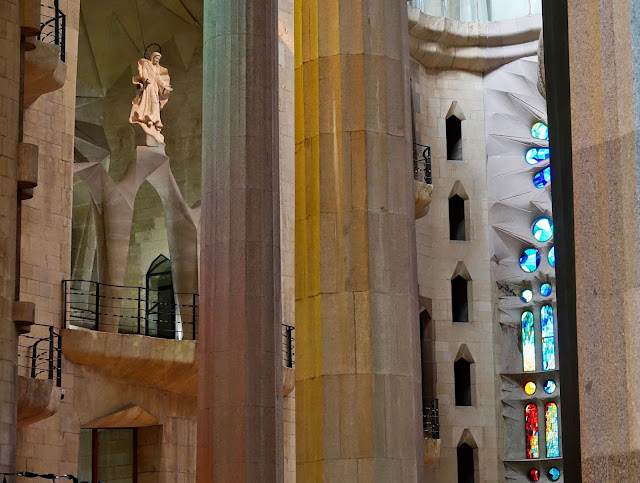 While color streams in with the morning sun through the stain glass windows. 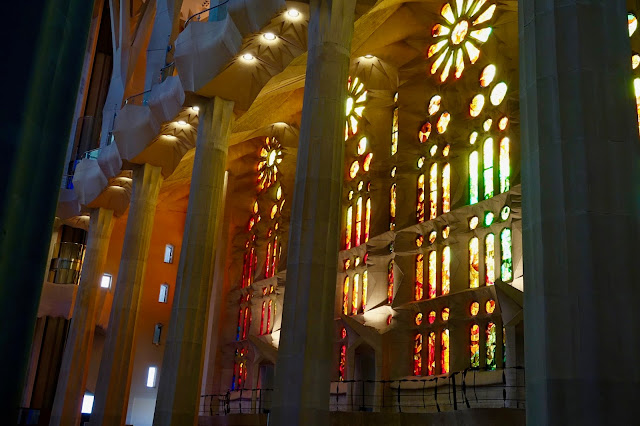 And the cross with Jesus over the center alter. 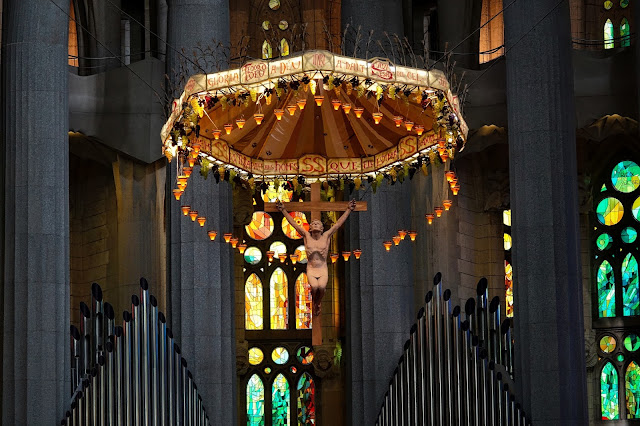 From the Sagrada Familia Cathedral we walk to the old section where the oldest church in Barcelona is.  Am always fascinated by old construction techniques and stonework. Like this wall below.

The ornate window on the left replaced a window that was similar to the window on the right. While the small window above the right window is stoned in.  You can see where over the centuries, the building was repaired, remodeled or simply changed by identifying the different types and colors of stones used. 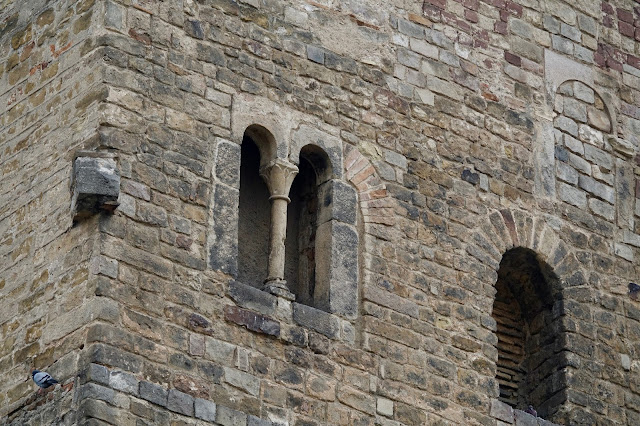 Seeing the wall below brings questions to my mind that tour guides dread when I ask them:

First why would the windows so high up have bars on them? Was this a prison on the back side of a church, or to keep invaders out?

Second, why are the bars cut, did someone escape? Hmmmm? 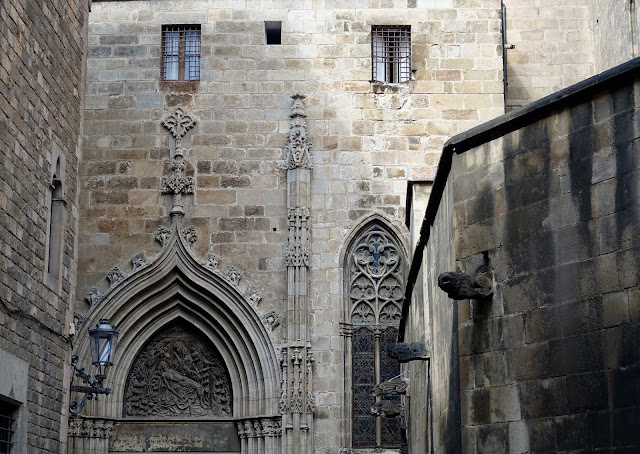 My favorite image of Barcelona is...

an innocent child plays with enthusiasm with the bubble maker's creation
under the arches of an ancient roman aqueduct. 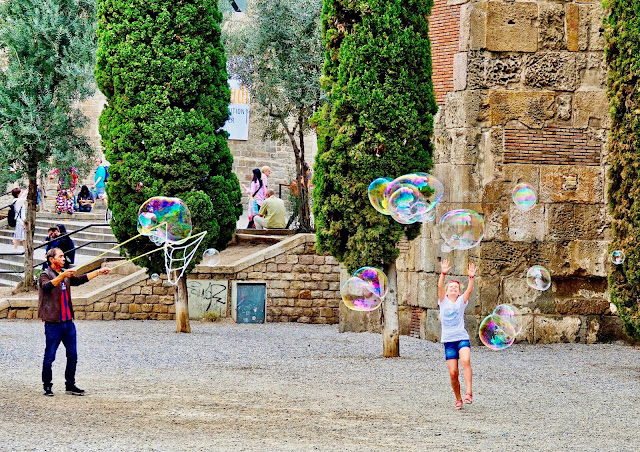 Amparo is at home here, happy to be with her people. 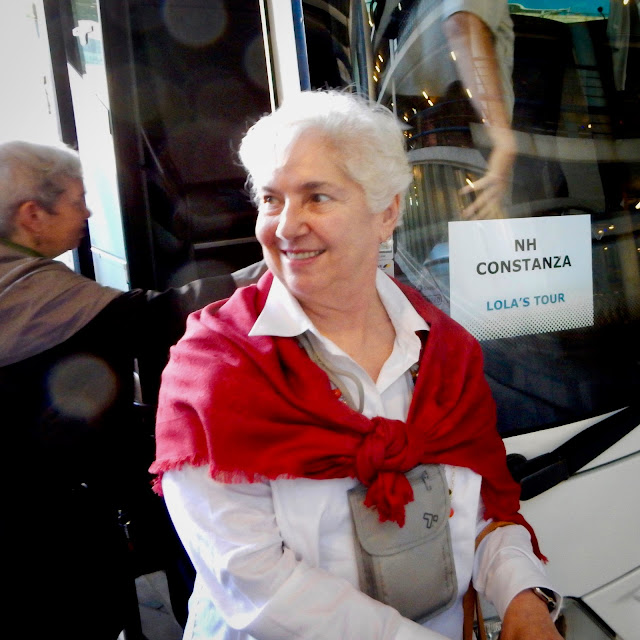 Tomorrow on to the northern coast of Spain, San Sebastian.