Rolling out of Vienna on the road to Praha (Prague), the morning fog lingers.
A mist covers a country estate. 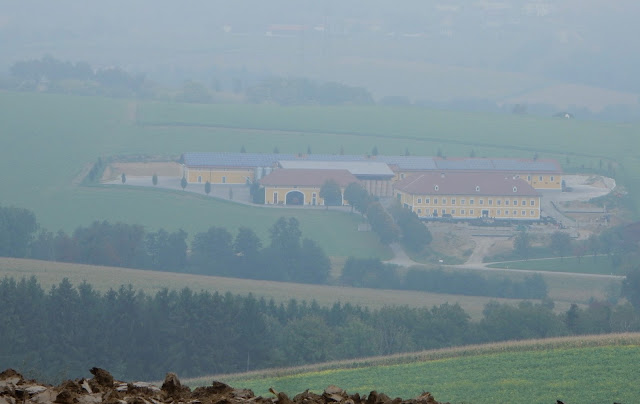 Today is a Czech Republic holiday, so traffic is heavier than usual for a weekday. Even with three driving lanes, the heavy lorries must stay in the far right lane.

Spotted a Russian Ural sidecar rig on the motorway. 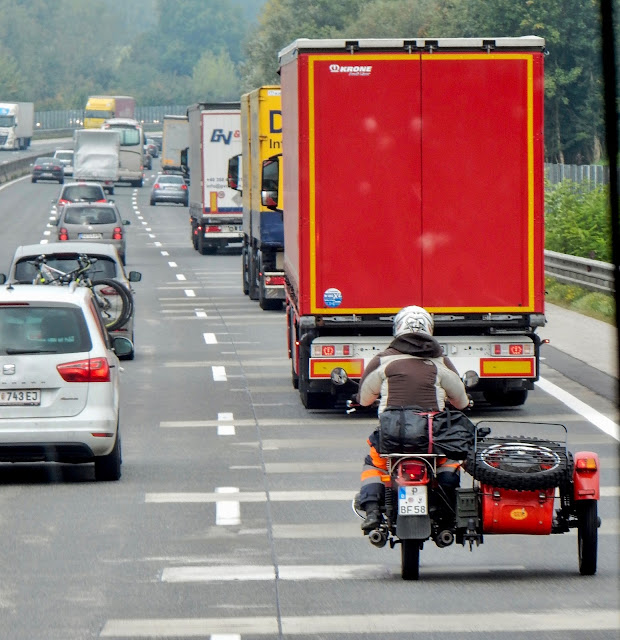 On the way to Praha, we'll make a detour to visit Českÿ Krumlov.
This Czech village was not bombed during World War II so the castle, monastery, houses and churches are not post-war reproductions. Thus making it a favorite place for locals and foreigners to visit. 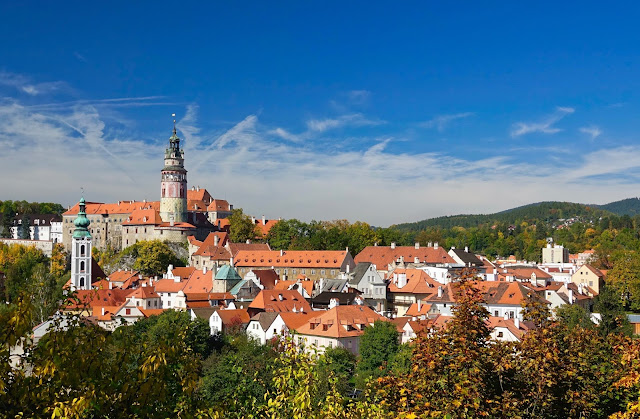 Fifteen years ago, all of the buildings here were in the some state of disrepair. Under Soviet rule, nobody could own land or buildings. Everything belonged to the State. Owners were forcibly ejected, sent to re-education camps (concentration camps, gulags). Those remaining felt no responsibility to take care of anything.

Once out from under the Soviet rule, little by little each piece of property has been reclaimed by the original owner/families and restored to a livable condition... except for this house.  There might be a problem with the title or a question of ownership.

Through out history, Communists and Socialists clamor for equality but have only succeeded in making everybody equally poor... except for the leaders. Their family and friends enjoy a much higher standard of equality. As they say here, some are more equal than others. 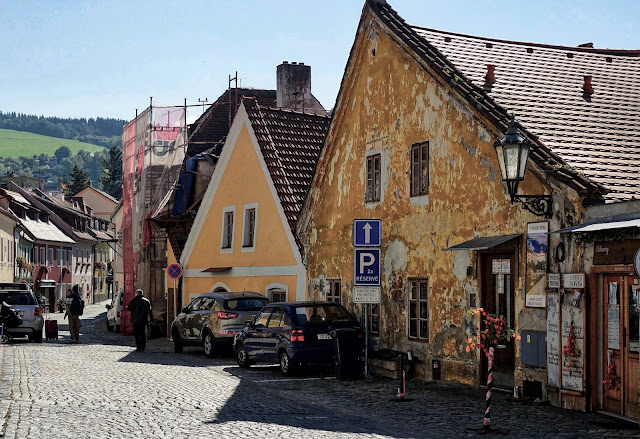 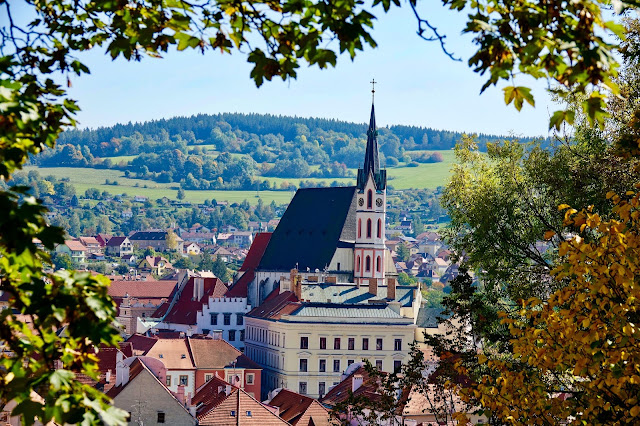 From the town square we walk up through the old castle that sits
high on a cliff overlooking the small village. 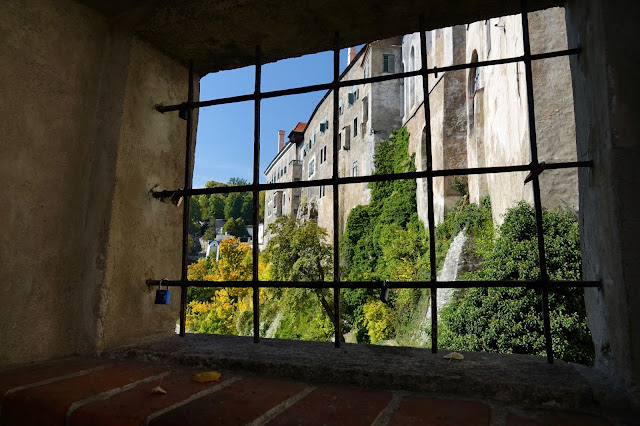 From on high, one has a great view of the town, the river and surrounding countryside. 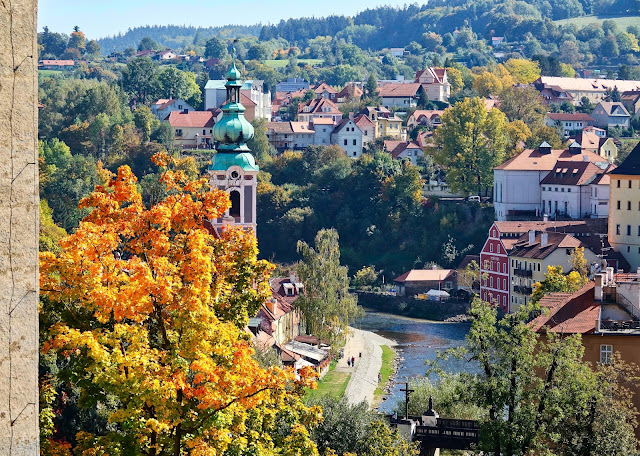 There are many statues here, but this one I immediately thought must be in honor of
the wine cellar frair or the beer brewery monk. 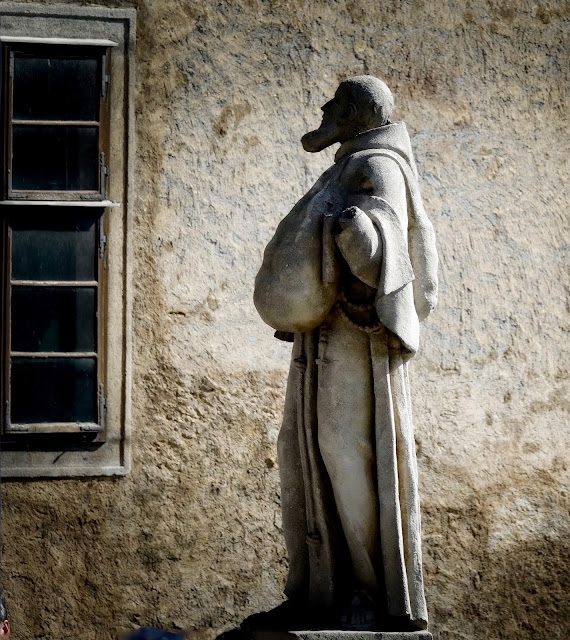 as I walk in front of it, I realized it is only a bag of grain over his shoulder
that gives one the wrong image... though my first impression still makes me smile.


An early morning fog hangs over Praha, though the locals say it is smog. We set out for a walk through the Castle district then to the Old Market Square. 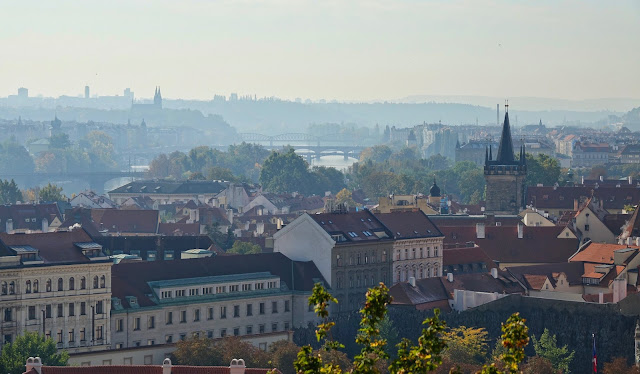 To capture a photo showing most of Prague castle and St. Vitus Cathedral, it must be taken from a far distance as the wall and buildings surrounding the church are too close to allow a complete view. 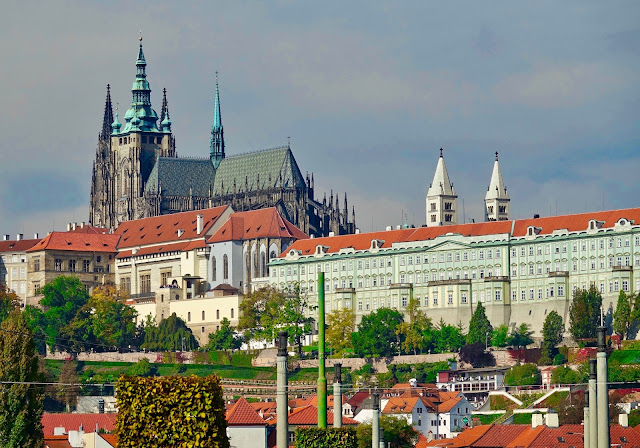 Buildings are very close to the base of church... 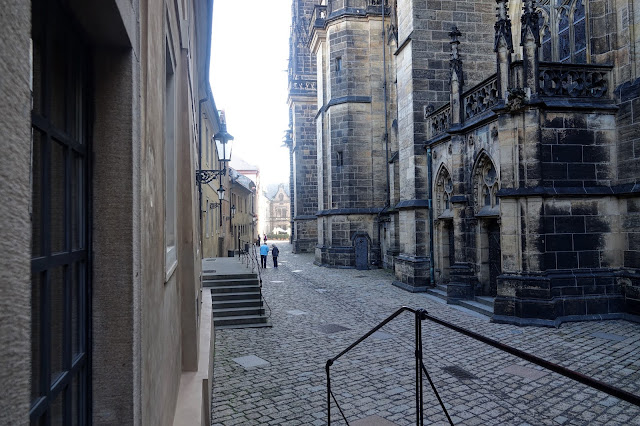 ...looking up, the camera can only capture pieces of the historic structure.
They are trying to pressure wash the church to remove the years of black grimy pollution but the soft sandstone does not take well to pressure washing. 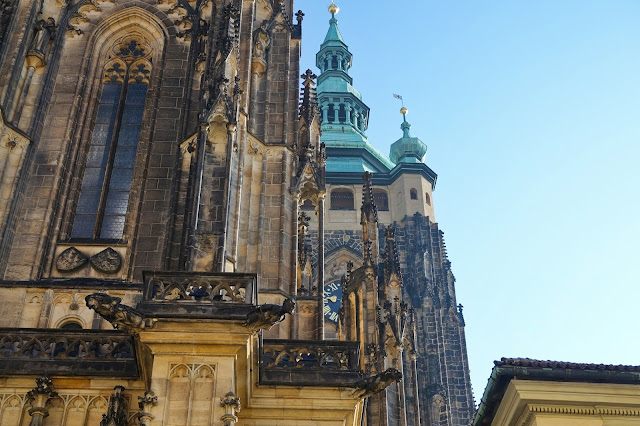 We walk on to Old Market Square to see the famous Astronomical Clock. It now only chimes on the hour from 9 AM to 9 PM.  Crowds gather to witness the hourly opening of two small windows above the clock, hoping to catch a glimpse of the crowing cock and hear the ringing of the bell. Personally I did not like the large crowd in the Square, only to learn that this crowd was considered small! In the summer the Square is packed shoulder to shoulder with tourists, vendors and pickpockets.

We slipped off the Square on to a side street looking for a quiet cafe to sit,
sip a drink and people watch.

Today I added a new two wheel mode of travel to my repertoire... Segway!
Booked a three hour tour of the west bank of Prague. After five minutes of instructions with Ivan on how to safely operate the Segway (in other words:  Okay, kill yourself if you want but do not wreck our beautiful expensive machine... LOL).

First lesson, there is no throttle on a Segway!

Second lesson, there is no brake on a Segway!

Third lesson, Please try not to hit anything expensive!

Joking aside, Ivan had me ready to go after five minutes of practice. 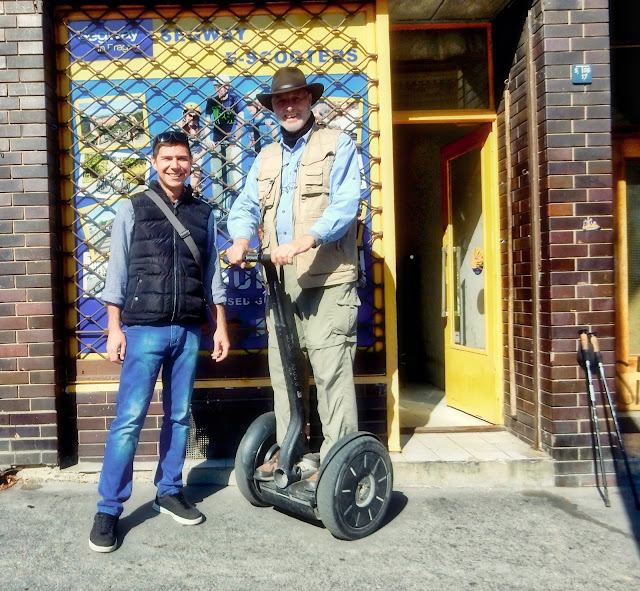 I signed up for a group tour, but since it was quite chilly this morning, I was the only foolhardy one to appear.  So a private tour with Ivan it was.  We had a great conversation about politics at the refreshment (beer) stop and again over lunch.

Our biggest obstacle was many roads and sidewalks they normally use for the tour were closed off for a bicycle race.  We had to make many detours on little used paths and trails. My kind of improvising. 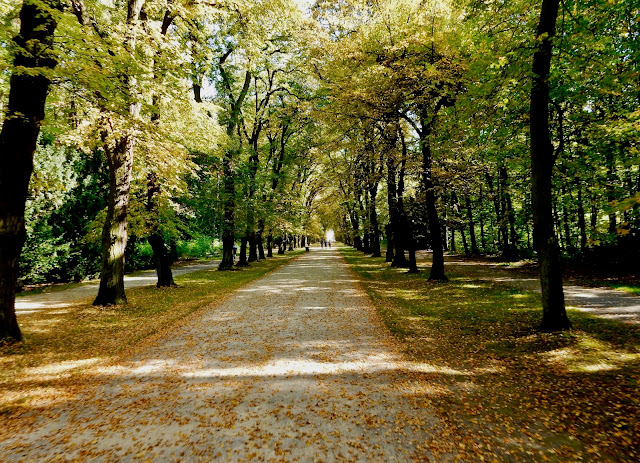 Fall has arrived in Praha, there is a morning nip in the air, leaves are falling. In a few months
these trails will be used by cross country skiers.

Tonight Amparo and I dined with our friends from Insight in a small cafe overlooking the city. 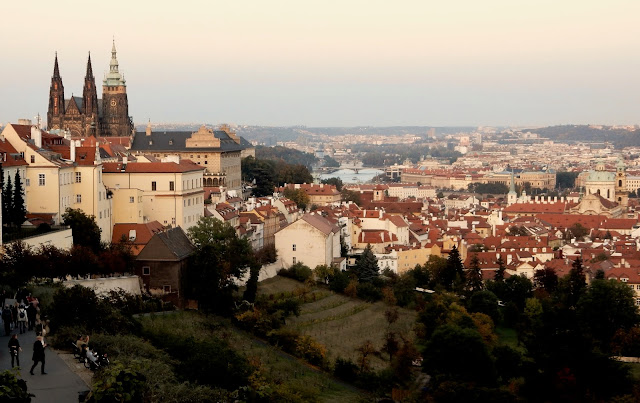 As night settles over the city, the palace lights come on, illuminating St Vitus Cathedral,
letting everyone in Praha know that God is watching over them tonight. 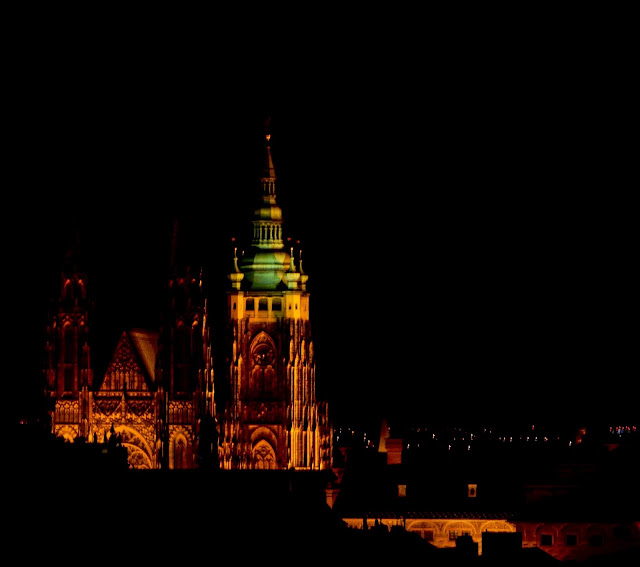 This wraps up the Prague chapter of our trip.

Tomorrow...  on to Germany.

p.s. We walked down to the historic Charles Bridge today... that was easy... 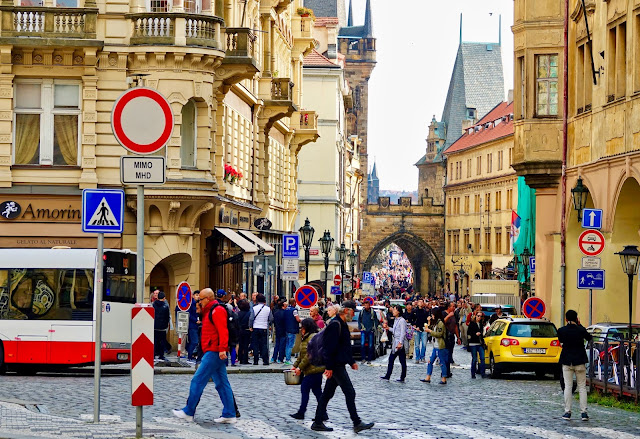 ...then back up to our hotel room in the monastery that overlooks Praha.

Am very proud of Tita for walking the 3.5 miles down and back up the hillside. 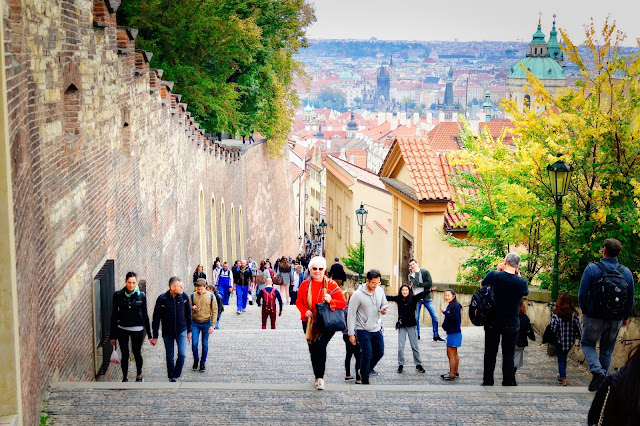 We're both exhausted by the time we got to the top.