Today we leave for Vienna, but first a stop in Szentendre, Hungary.


Szentendre (aka St Andrews) first attracted artists to this small village near Budapest as it was affordable and yet close to the capital. Is on the Danube River, has clean air and a pleasant climate. Nowdays the town has became so popular that now it is no longer affordable for artists unless they are already famous and sell their works in galleries.

In most small country villages, life revolves around a church on or near the city centre. Szentendre is no exception. In fact for a small town, several old churches were seen near the centre. 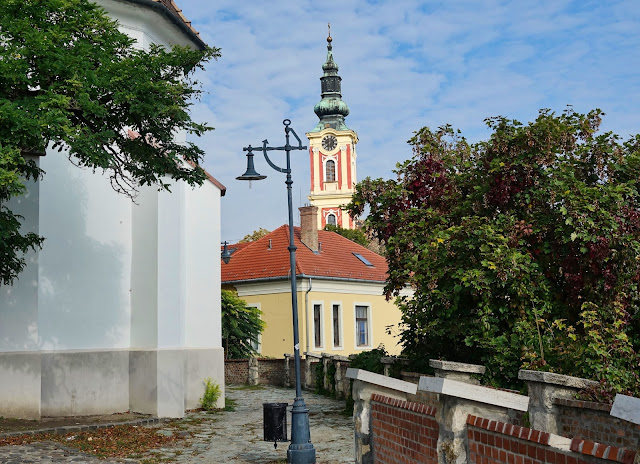 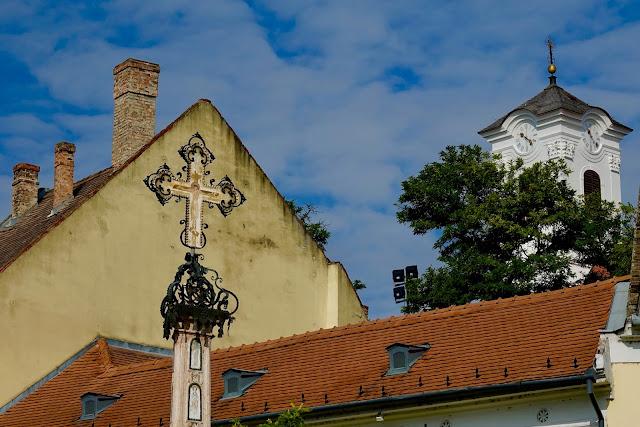 Amparo found a statue of Pope John Paul the II, her favorite Pope. 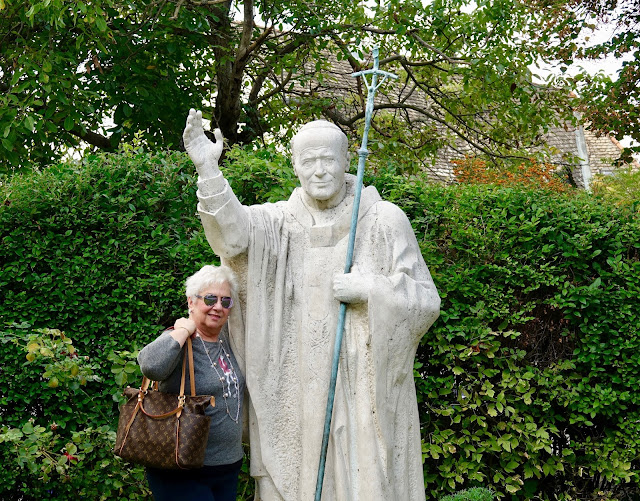 Inside, the nave was quite simple yet very clean and respectful. So very different from the highly decorated naves we saw in the Mathias Church in Budapest. 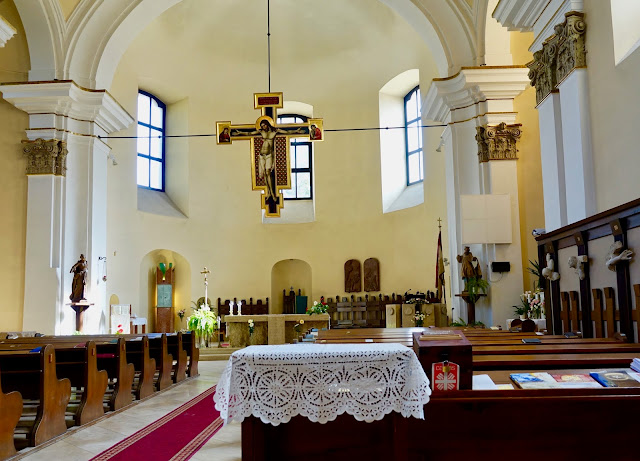 Cobblestone pavers and outdoor cafes still survive in the center plaza. Being here in the fall is nice, cooler temps, fewer tourists and children are in school. 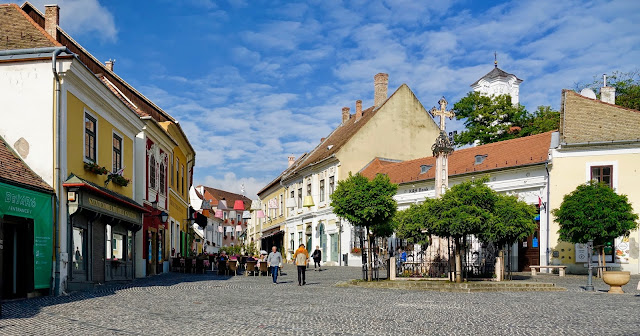 A unique use of lampshades over the outdoor cafe.
Recycle and reuse everything. Waste not, want not. 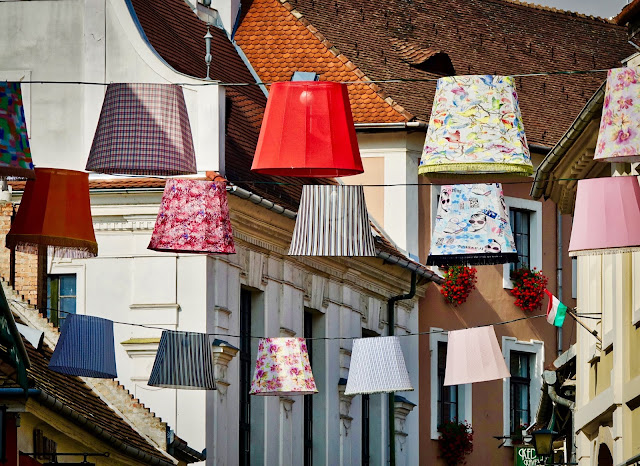 Back when most people were illiterate, shopkeepers hung signs above their entrance that indicated their trade or profession.  Here an innkeeper's metal sign showing a bed to let the weary travelers know this is an inn. 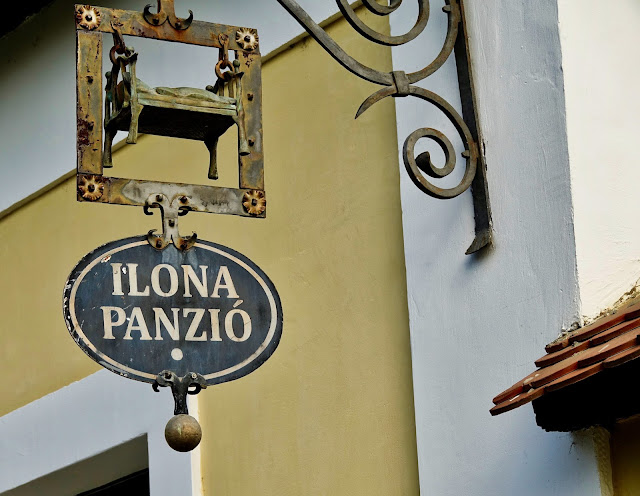 A sight we have seen in many of parts of the old country, a matronly lady who would not think of leaving of her home if not properly dressed.  If only going for their daily mass or to the corner market. 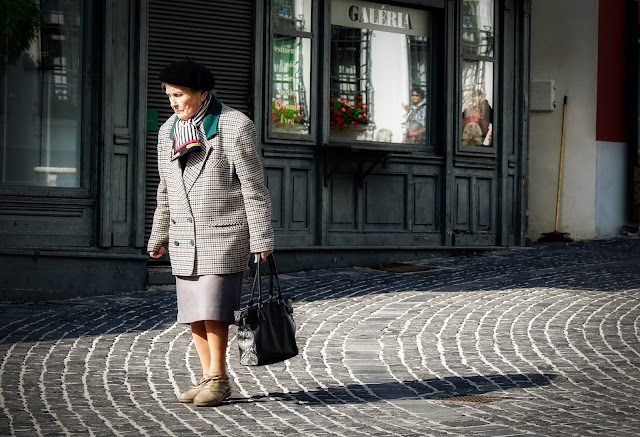 The young ladies here seem to think pre-torn jeans are the mode-de-rigour.

We love to walk and explore these small quaint villages.
Whenever I see a lane like this, my only thought is.... Hmm, I wonder where this goes? By the time we arrived at Hotel am Konzerthaus in Vienna, it was late afternoon.
After checking in, we walked to a nearby restaurant as dusk settled over the city. 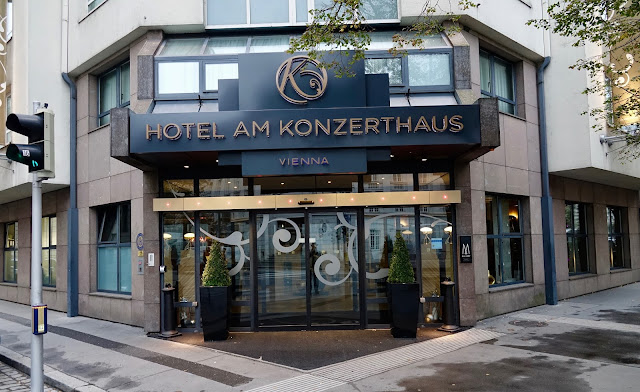 Today we make an early visit to the Schloss Schönbrunn, the summer palace of the imperial Habsburg family. You know it is early by the lack of tourists in the photo. In two hours this plaza will be so crammed with visitors from all over the world that making a photo like this would be impossible. 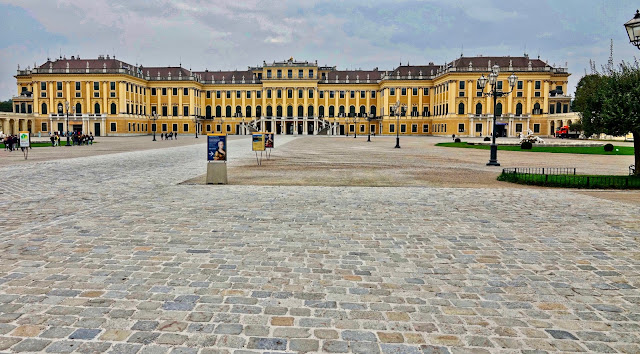 Like every European palace, it must have its roman marble statues...
particularly since the Romans conquered Vienna in 15 BC.

Vienna became the centre of the Holy Roman Empire in 1273 with the crowning of Rudolf I. 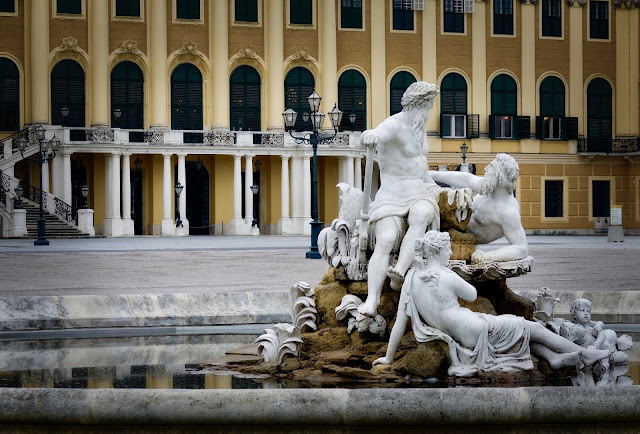 ... and its lush colorful gardens. 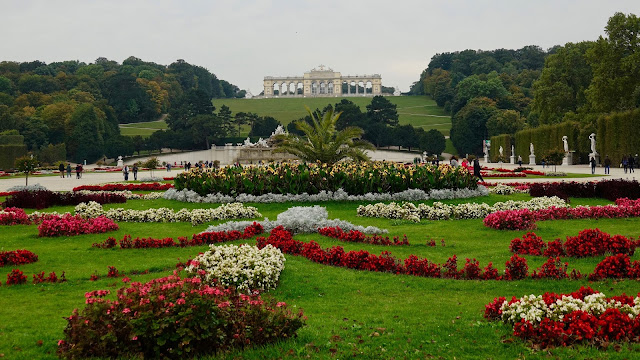 No photos were allowed to be taken inside the palace, sorry!

Tonight we attended a Vienna concert of classical music, ballet and opera. Once again no photos allowed inside of the artists, so instead an art photo of their instruments. 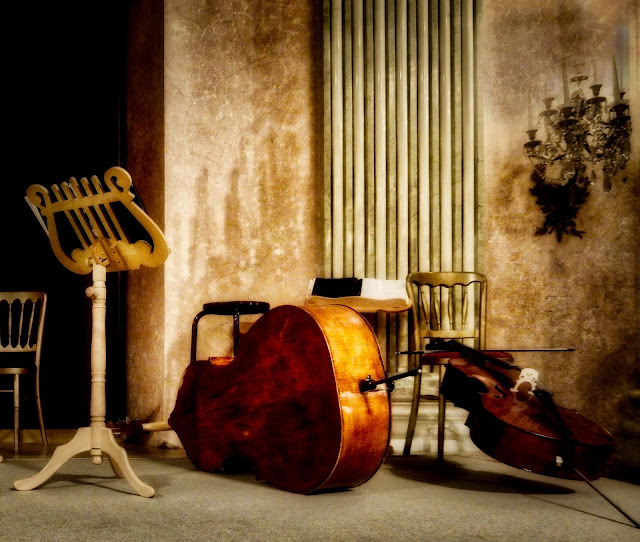 Afterwards Amparo agreed to be my model for a post-concert photo near the Liberation Monument fountain. 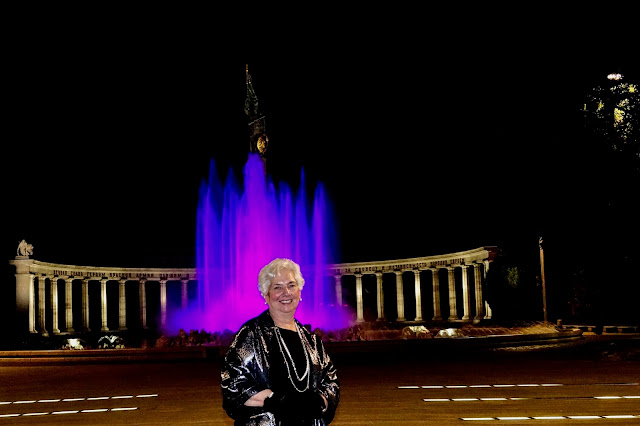 Today we take a side trip to Bratislava, Slovakia, home of the UFO...

the UFO Bridge as the locals refer to it. A Soviet designed bridge with a rotating restaurant atop the center pillions. Ironic considering the 17th century architecture of the old town at its feet. 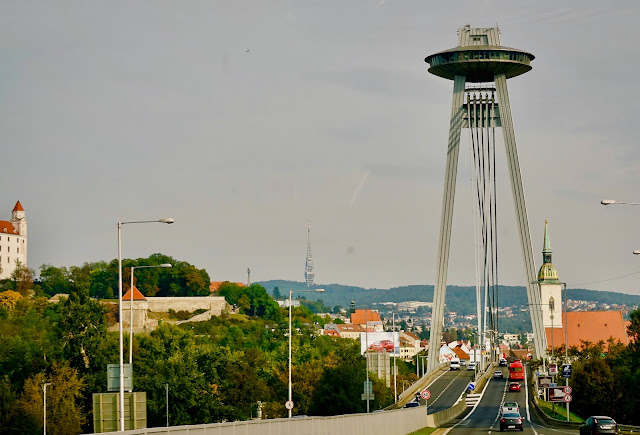 Narrow cobblestone streets leading to a square with a church. 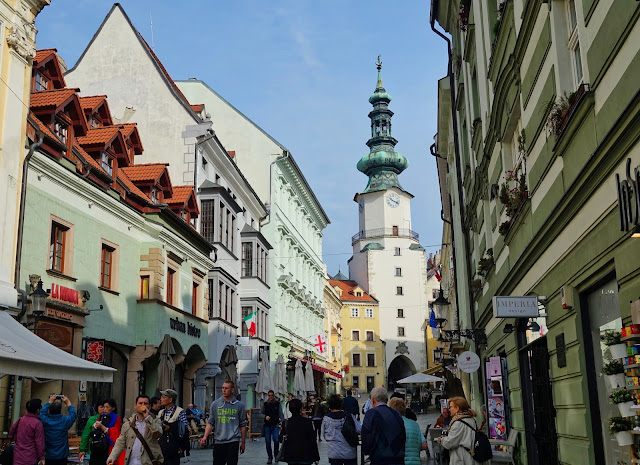 In the square a fountain topped with a statue. 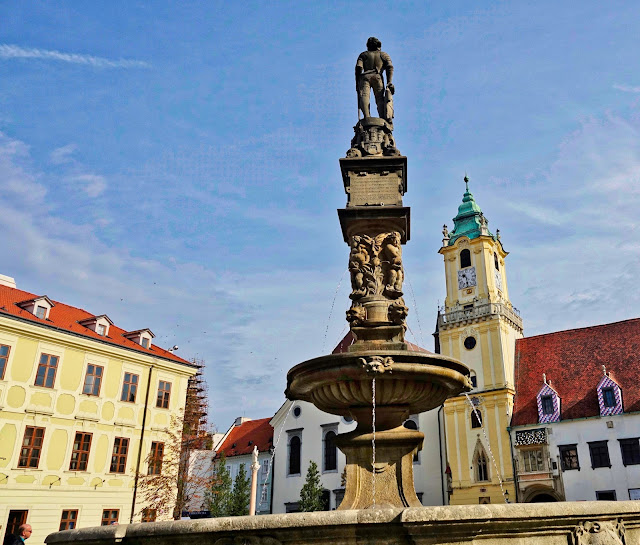 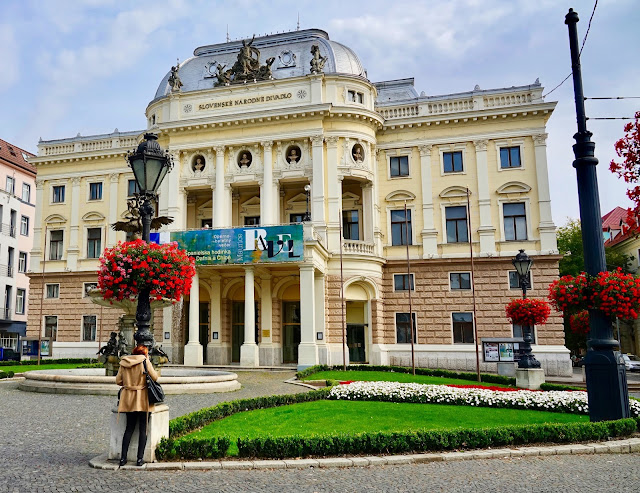 What sets Bratislava apart from the rest of the continent is its sense of humor.
Scattered through out the old town are statues, big and small, in honor of...
hmmmm not sure what you would call it.
Like this one... 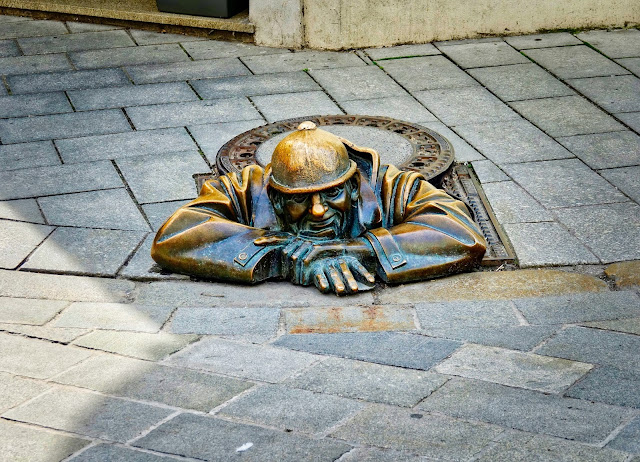 Some say he is a worker resting, others say he is watching the ladies walk by.
Maybe the city fathers thought, well, nothing important happened here but we have a sculpture grant that we must either use or lose. So lets have some fun. 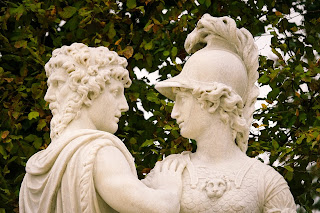 Bratislava has its statue of a dapper citizen who was always dressed to the nines. So elegant was he that people invited him to dine with them to impress their friends. It is said that he never had to pay for a meal in his life. 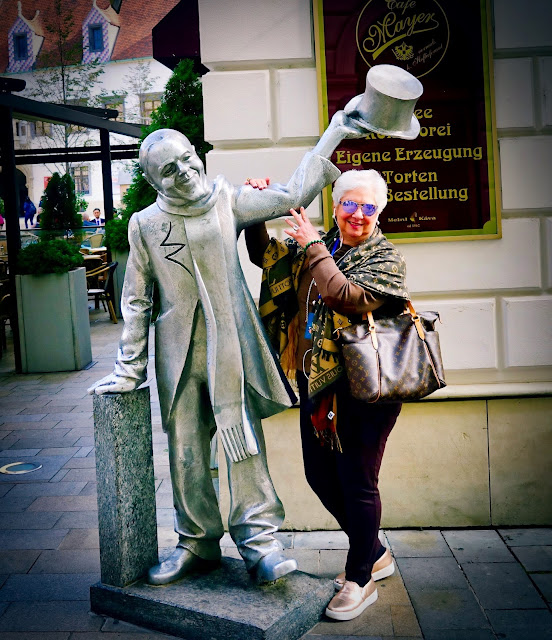 In their own way, Bratislavans(?) continue a time honored tradition of not taking themselves too seriously.

A century or two earlier, another Bratislava citizen was immortalized when a small statue of him was built into a city wall. The story is this citizen was so excited when he heard shouts of the King walking by, that he rushed from the toilet to take a peek, forgetting to pull up his pants. 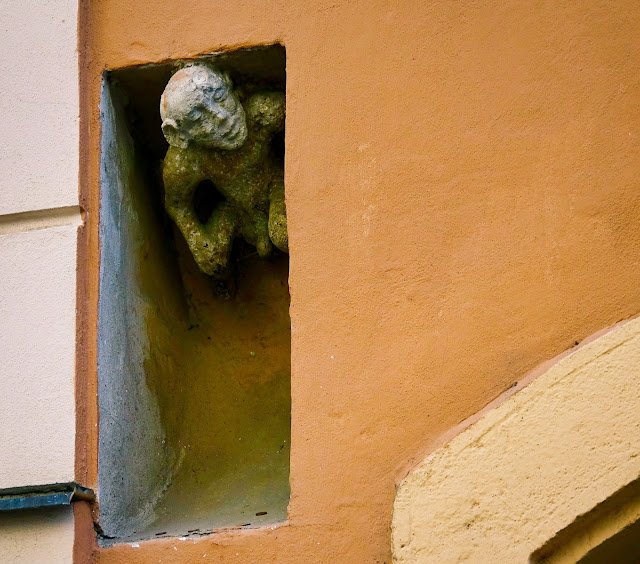 We return to the cosmopolitan city of Vienna for one more night. 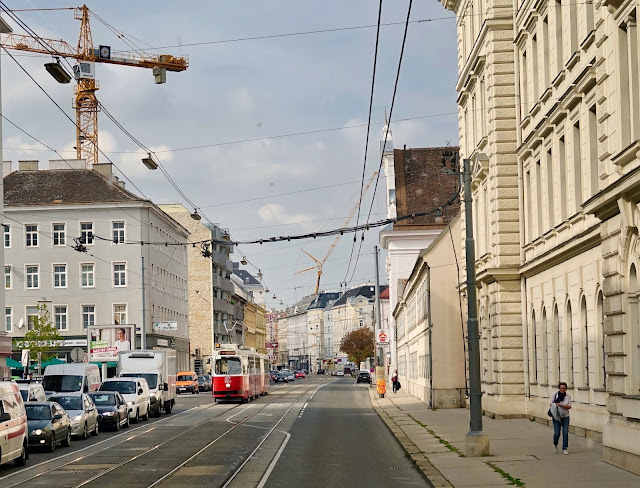 Sleep well, my friends, tomorrow we continue on to Prague.