Finding M&M's in the Snow

With their mother's permission, here is a tale of M&M's who had never seen snow.

Once upon a time, there lived a southern family doctor with her twin eleven year old daughters,
M & M.  Megan and Meena had never seen real snow, only pictures in books. They were fascinated with everything about snow. They read every snow story they could find, from Snowballs to Frosty the Snowman to the Snow Princess. They wanted so much to know what snow was like. Alone in their room, they would close their eyes, touch the snowy picture book scenes and dream they were there.

Living in South Texas where snow rarely falls, they longed to one day know snow.

Every Texas winter when the temperature dips below 50 degrees, they would ask their mother:

Their hard working mother tried her best to describe snow for them, but it only left them wanting to really know, to experience... 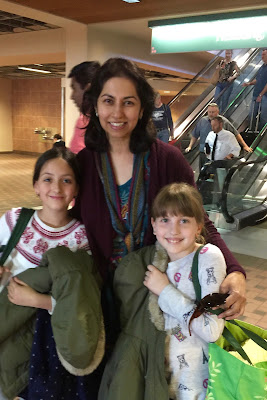 One day the good doctor told her friends Tita and Abu about M&M wanting to touch snow.

Quickly the three arranged a trip for the doctor to travel with M&M to the Rocky Mountains in Northern New Mexico in search of snow.  The first opportunity was Spring Break from school, in the middle of March.  Spring can come early in the southern Rockies but with any luck M&M will taste their first real snow.

Abu promised M&M he would help them find their snow.
But if Spring comes early, that will not be so easy to do.

When M&M arrived in Angel Fire on a warm sunny March day, the snow had already retreated to the distant mountain peaks. Now only dry dead grass covered the fields where snow once sparkled in the midday sun. 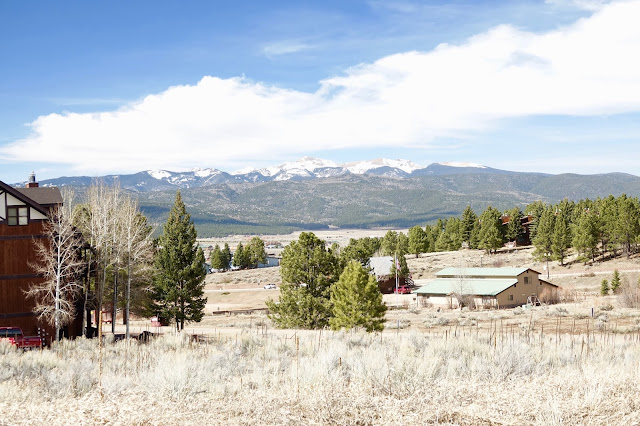 Across the warming valley, blue birds were singing their song of welcome for an approaching spring. 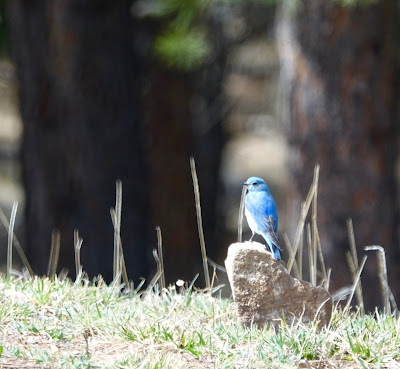 Winter's deep snow may have left the warm sunny valley, but M&M
were determined to go looking for it... 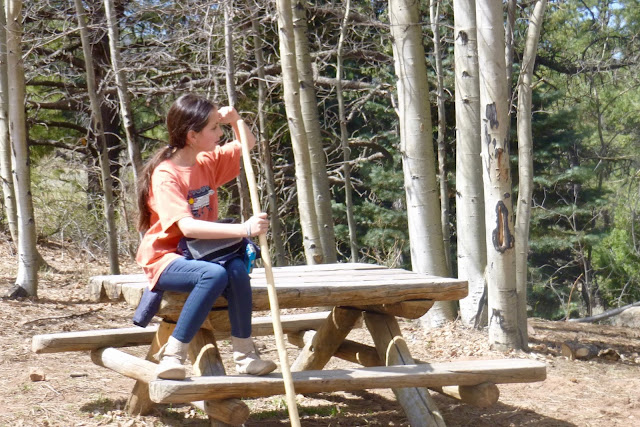 Every day M&M hiked with Abu into the forest looking for snow. Only finding small melting patches here and there... in the darkest shade of the evergreen trees. 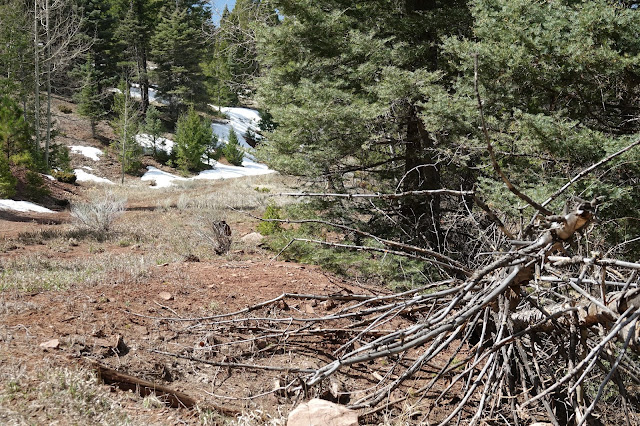 One day they found a large patch of melting crusty snow. M&M were thrilled as they wanted to try sledding before it melted even more. The icy crust of the snow was fast and hard.
The sleds were uncontrollable, the girls took fall after fall...
but it looked like snow M&M had imagined. 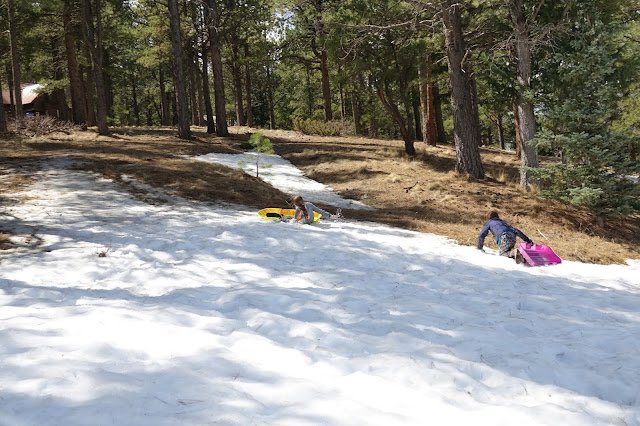 The next day they again hiked, further and deeper into the forest, continuing their search for fresh snow... 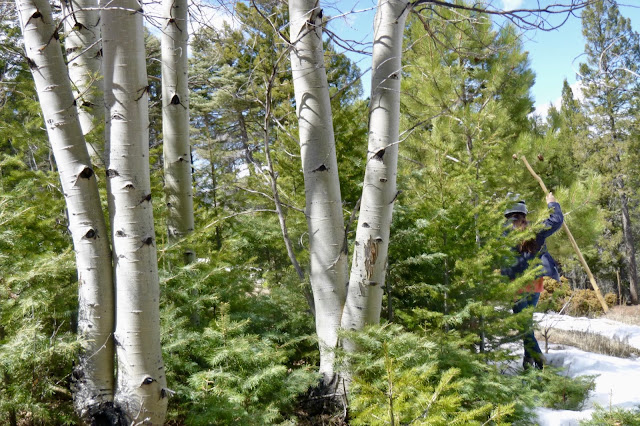 Discovering deeper drifts of old snow,  M&M were not sure how to walk on this hard white stuff. It wasn't at all soft and fluffy as they had read snow would be. 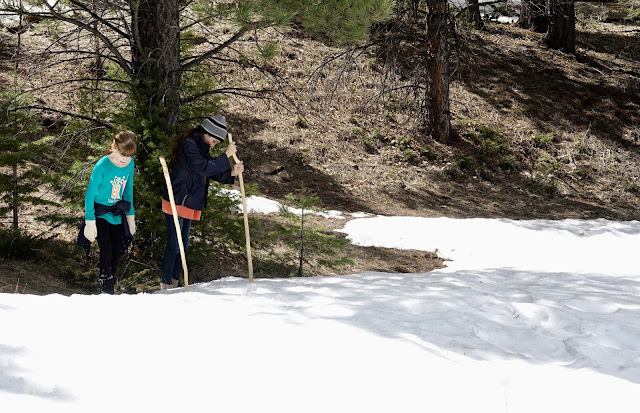 With no snowshoes, M&M discovered that walking on snow is not so easy
when it is deep and the crust breaks. 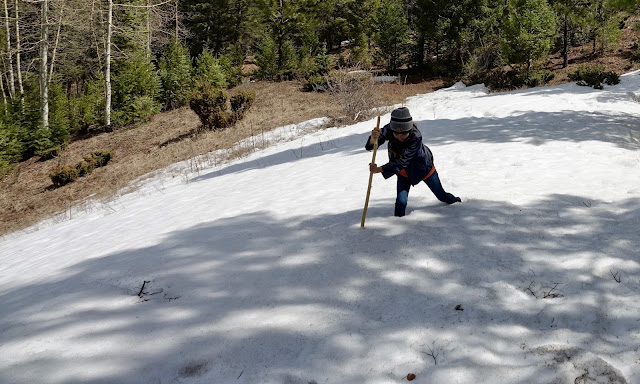 When the snow crust doesn't break, it can be slippery and dangerous for walking. 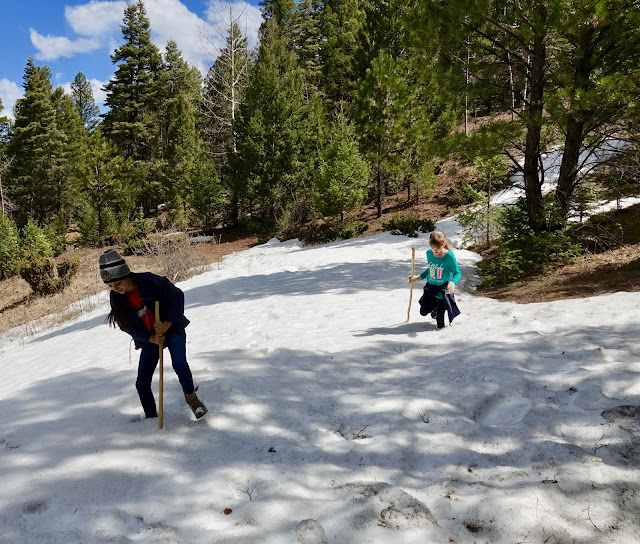 Suddenly the thin crust breaks, and one sinks in knee deep or further... 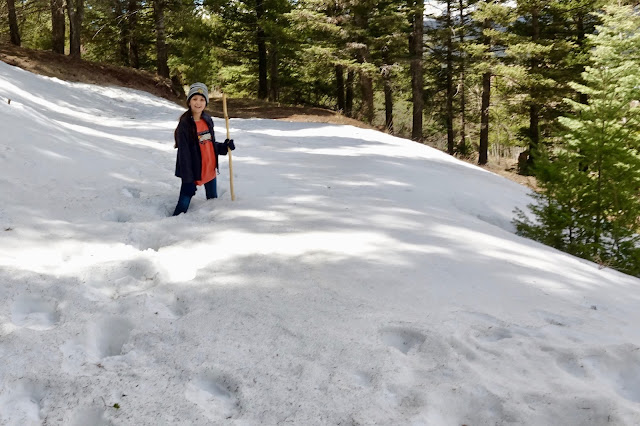 Meena takes aim... as she discovers how to make a snowball, even with old snow. 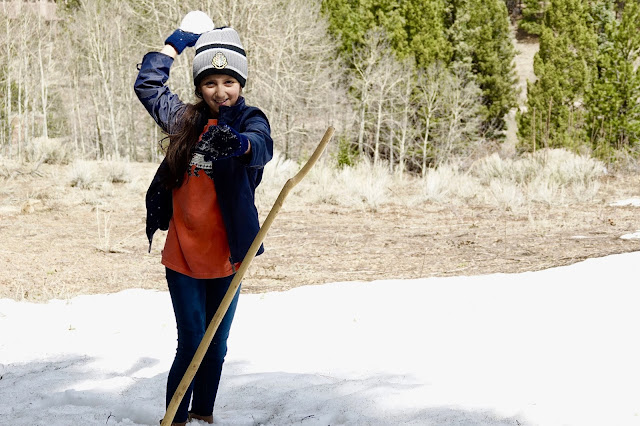 While Megan finds an abandoned chair in the forest where she can dream and wish for new snow. 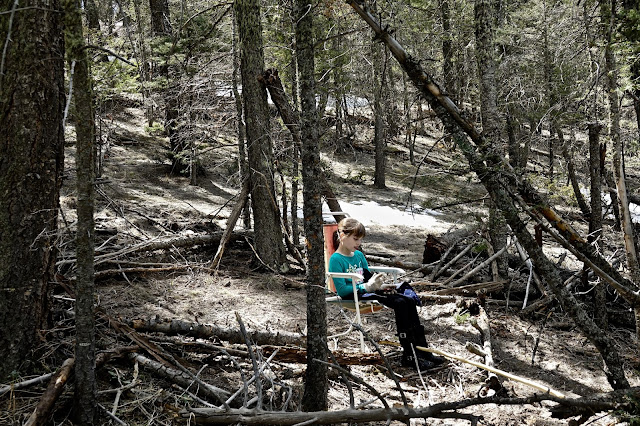 After their long day of hiking,  M&M take their mother for a horseback ride to show her where the snow patches hide.

So far they touched and tasted old dirty snow, but will they ever find the fresh soft clean snow they had read so much about? 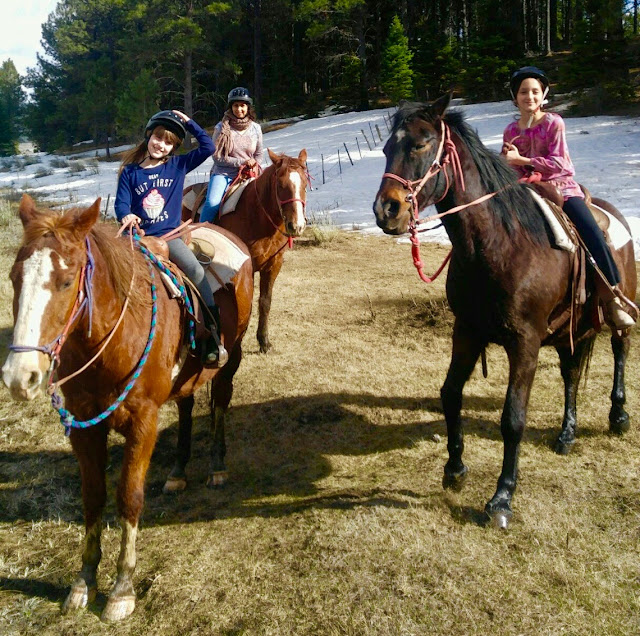 On the fourth day, the sky turns grey, temperatures drop, clouds roll in. New snow silently appears.
A few flakes at first, then more and more fill the air, burst forth out of misty clouds, swirling with the wind,  drifting like magic down from above. Answering the little girls prayers.

M&M finally learn what falling snow sounds like... a deafening quiet
pierced only by their happy screams of joy and laughter! 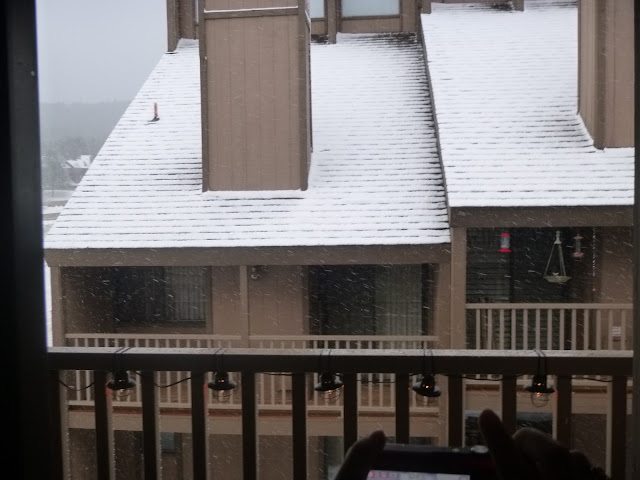 Meena is speechless to describe hearing the falling snow... 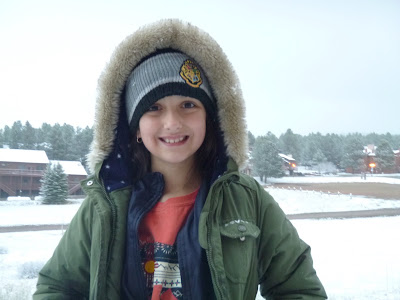 Megan loved the taste of fresh snow as it gently lands on her tongue... 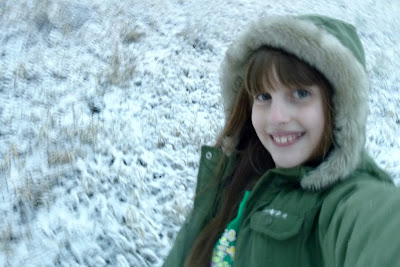 Even a young elk appears to join the celebration of fresh fallen snow. 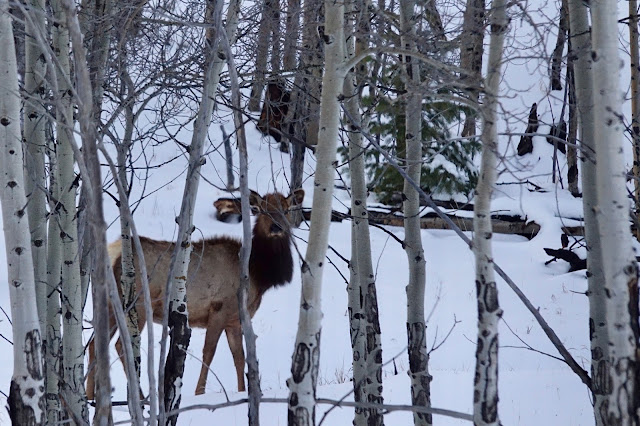 Mother and Tita are happy M&M finally found their snow. 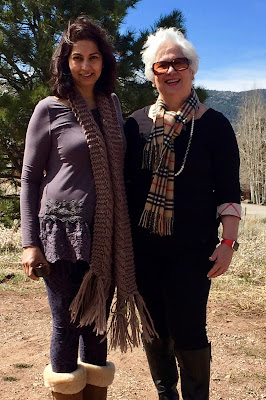 Abu gets his reward for helping M&M find their snow. 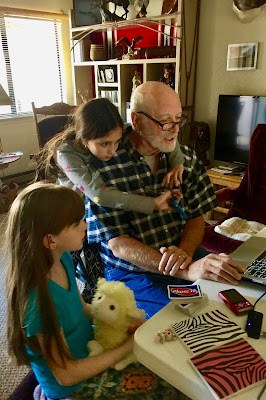 The new snowy experience was unforgettable for all. 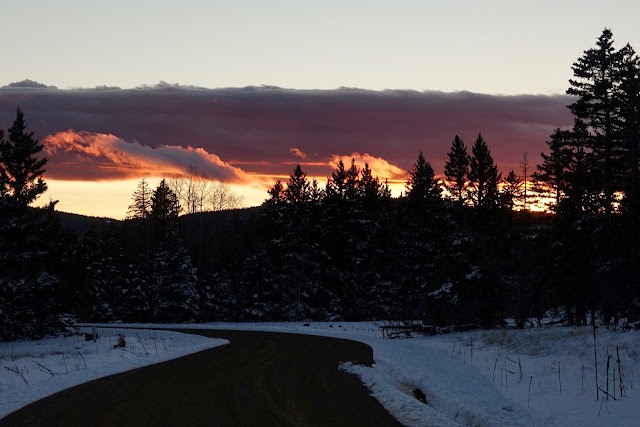