Amparo and I arrived late afternoon in Budapest. By the time we were settled in the hotel, night had fallen. 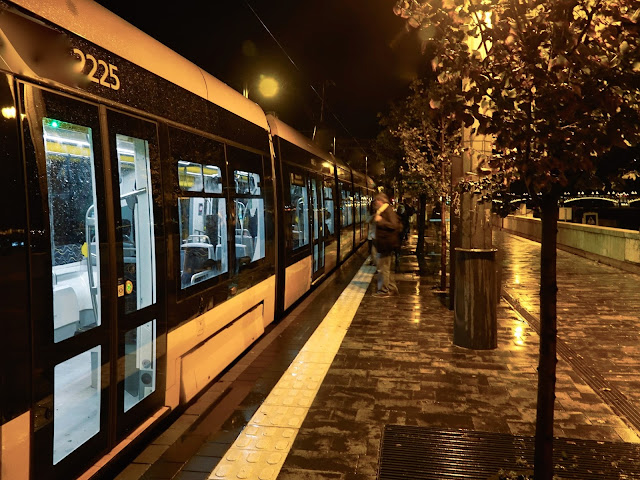 The rainy drizzling cold weather emptied the streets rather quickly tonight.
An umbrellaed inhabitant scurries to a warm home. 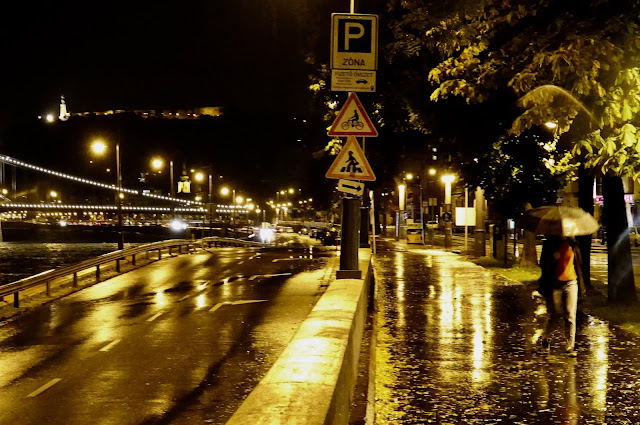 By 9 pm the electric commuter trains were largely empty. 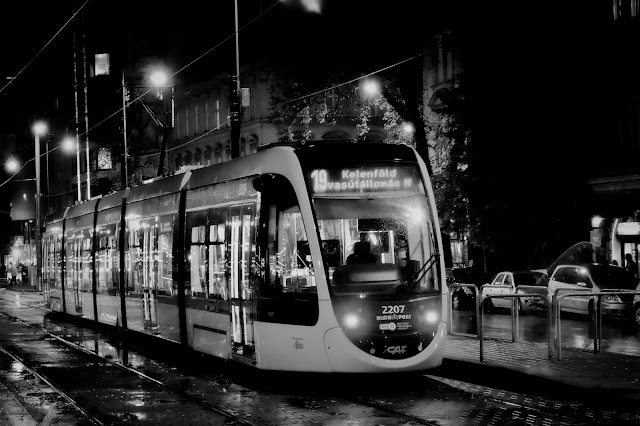 In spite of the wet cold, the Parliament building across the Danube River,
as seen from our hotel balcony, was brightly illuminated until midnight.

Beautiful sunny day, great for walking... exploring. Parliament Building is as impressive in the daytime as at night. It resides on the "Pest" side of the Danube. We are staying on the Buda side.
We were sternly informed that it is pronounced "PEHST", not PEST. 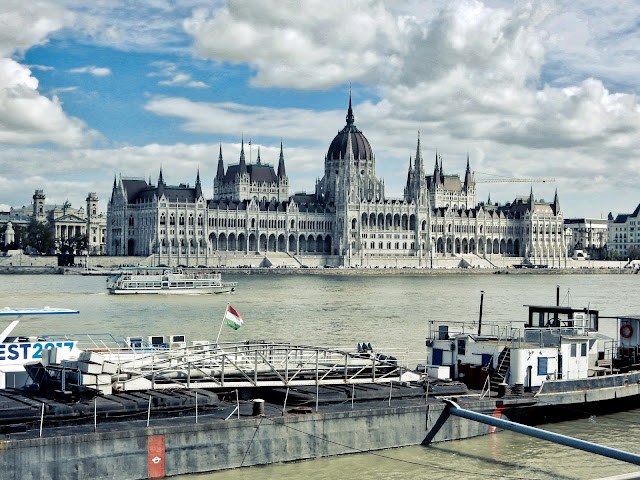 The second largest Parliament building in Europe fronts the Danube River. The building was originally build with two equal sides for the upper and lower chambers. Now with just one party in control of the government, only one side is used, the other half is open as a museum. 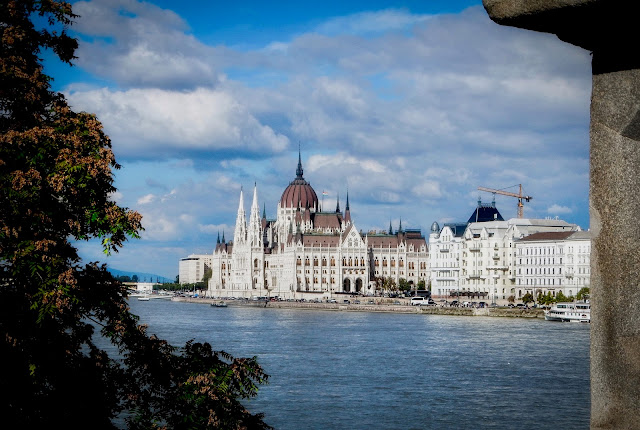 Completed in 1849, the Chain Bridge was the first permanent bridge between Pest and Buda and only the second permanent bridge on the full length of Danube.  Like the Eiffel Tower for Paris, this bridge has become the international symbol for Budapest.

It is the most photographed of the seven bridges in the Hungarian capital. 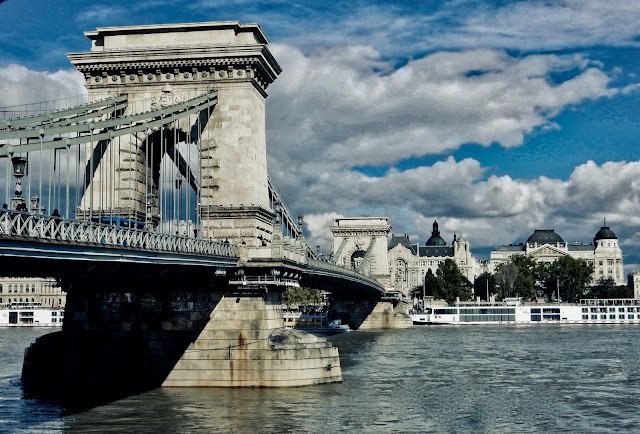 Guarding the entrance to the Chain Bridge. 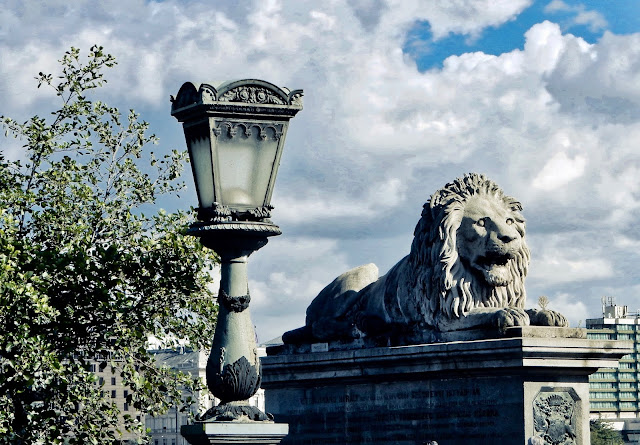 Modern transit in "Buda-Pesht" are the trains. buses and subway which cover most all of the peoples needs to get around.  However if one wishes to travel under their own power,
bicycle paths are found on most every street. 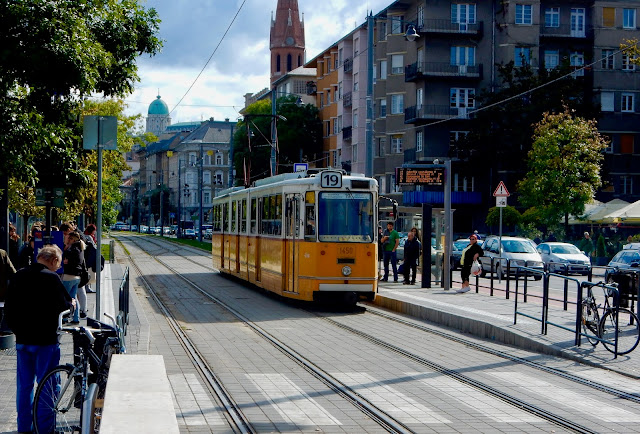 By accident, we encountered the son of Popeye and Olive Oyl...
working as a dishwasher at the Sailor's Inn on a side street in Buda. 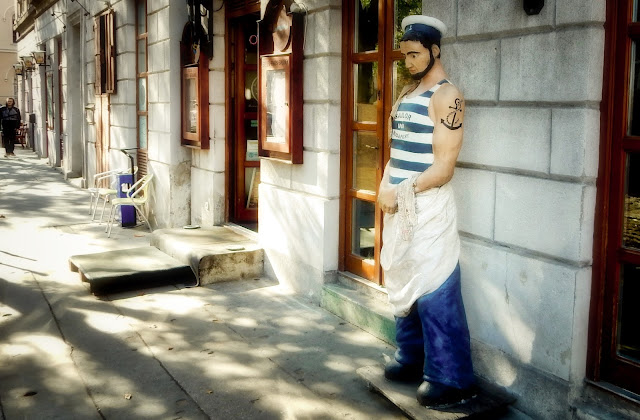 Taking a mid-day siesta, even panhandling can be exhausting... 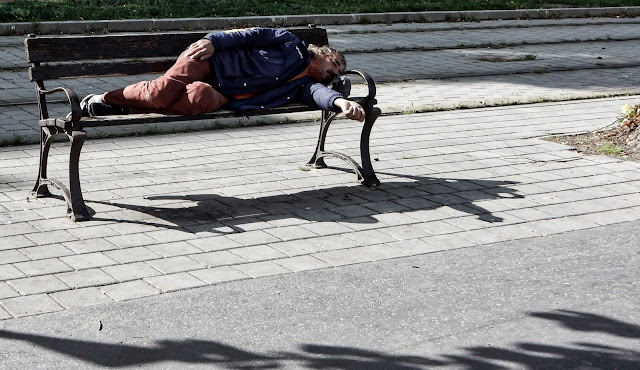 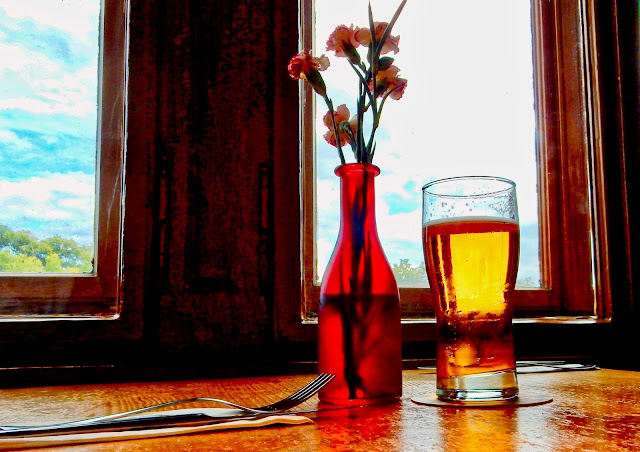 
Today we went to visit the Castle Hill area of Buda. High on the list was the Mathias Church that sits on the highest point of the ridge overlooking the Danube near the Fisherman's Bastion.

Each of the city's medieval guilds had a section or bastion of the fortress wall to defend against invaders. Today the only preserved bastion is the Fsherman's nearest the church, which happens to offer the best views overlooking the Hungarian capital. 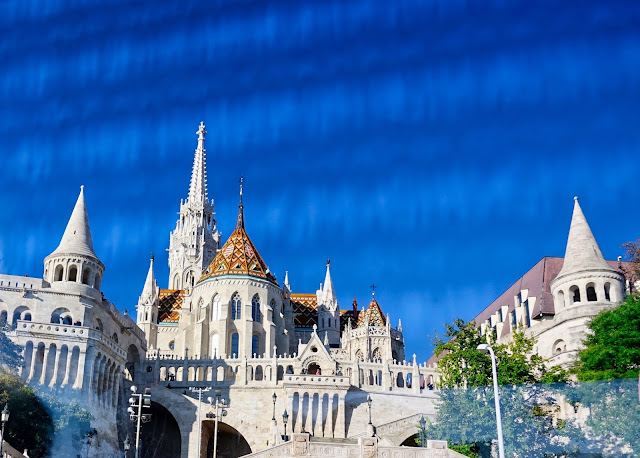 (This poor photo was shot thru the bus window).

Inside the Mathias Church, the walls are dark and muted to recreate the original architecture and finish which was destroyed in World War II. 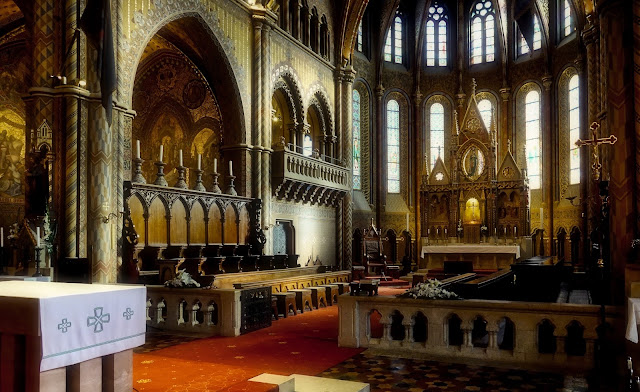 Except for three houses, this entire area was destroyed during WW II. First by the Germans, then the Americans and finally the Russians.

The next forty years after 1945,  Hungary was under Soviet communist rule.

During reconstruction, every stick, stone and tile was replaced to
restore the buildings to their original look and style. 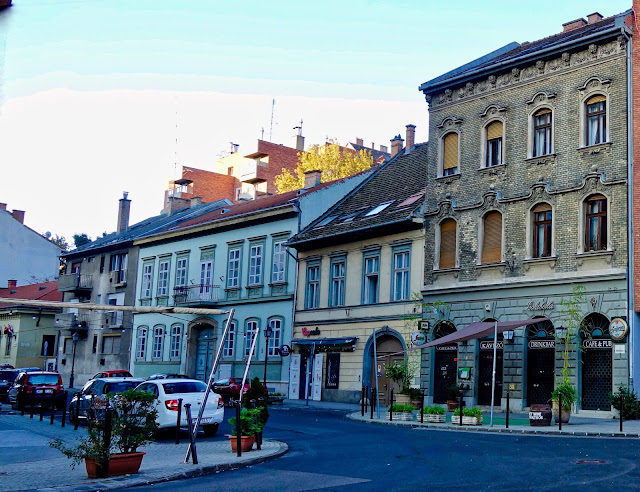 Many new "old classic" churches dot the neighborhood near our hotel on the Buda side. 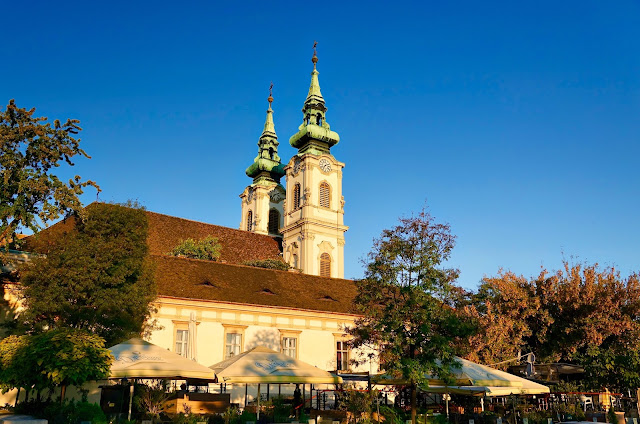 In the evening we took a dinner/sightseeing river cruise on the Danube. 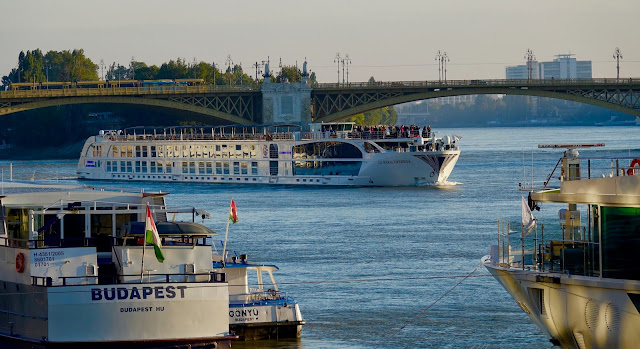 The city is well lite at night. Below is the french designed and constructed steel bridge said to be designed by Eiffel. Each of the seven bridges are different, thus used by the locals as landmarks to reference a location on either side, e.i. 'that store is only two blocks south of the Chain bridge in Pesht'. 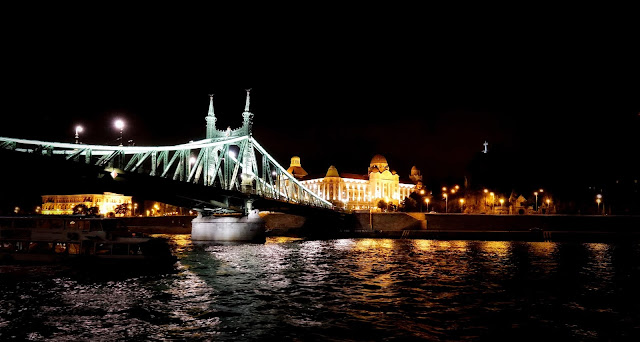 My favorite photo of the night taken from the middle of the Danube:
Chain Bridge with the illuminated Mathias Church on the hilltop behind. 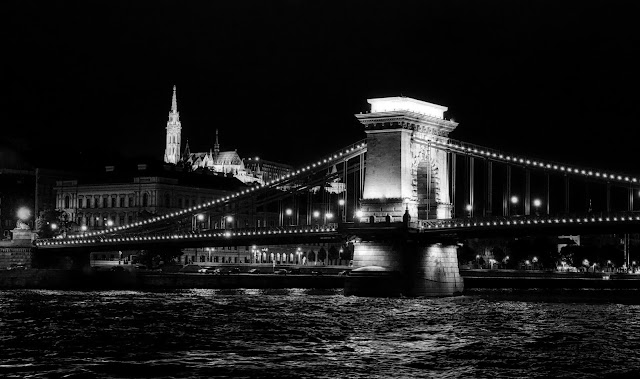 Today we were invited to the oldest and first strudel house in Budapest, Elsö Pesti, to learn how and why only the best Hungarian strudel is hand made. Never with machinery that the Austrians use.....
so says our Hungarian host.

First, one starts with a clean table.... 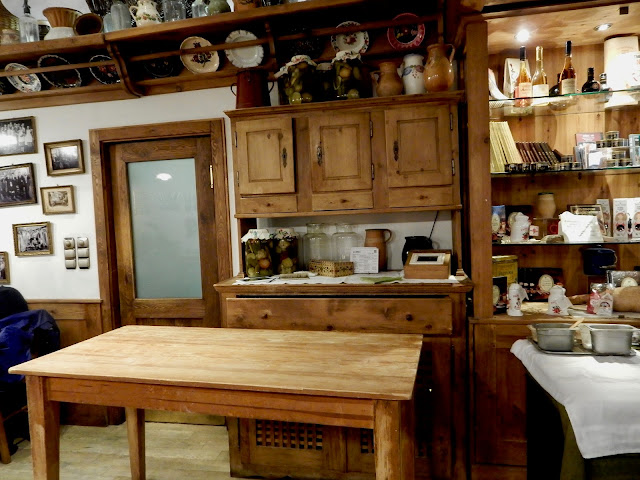 Stretching the dough to a transparent thinness requires practice and deft hands. Stretched so thin that you can read a newspaper through it.  Custom dictates that a young lady is not ready for marriage until she can spread the high gluten dough without tearing it. 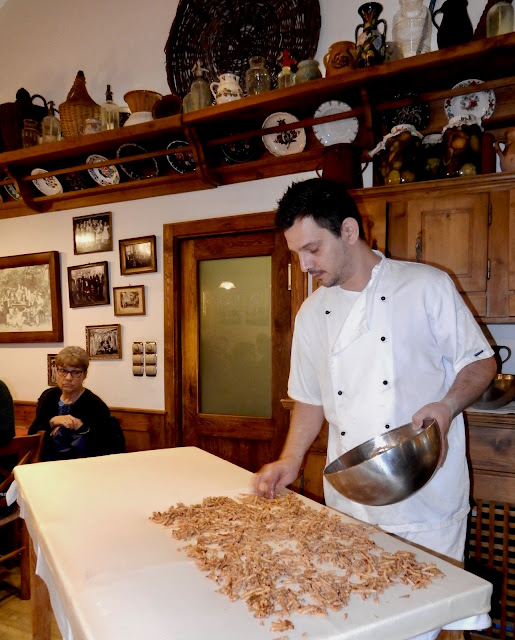 Next add the apple cinnamon mixture. Semolina flour is added to the apple mix to reduce the moisture content so the strudel is not runny or soggy.

Okay, now you do it! 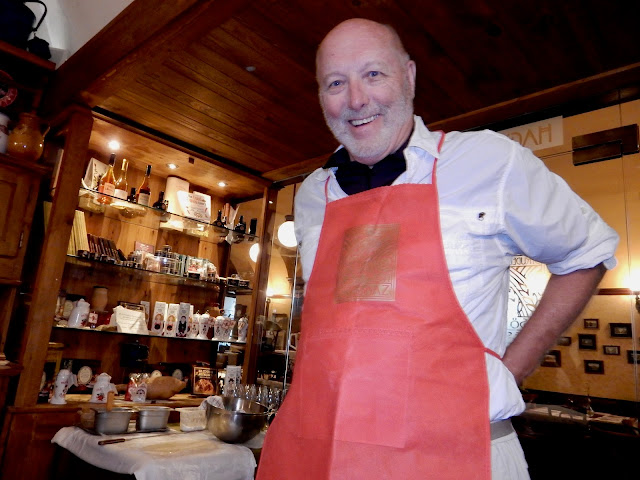 Oh.... well, the carnage and destruction that happened after this photo is not suitable viewing by grown adults or small children as they might never, ever, eat strudel again!
My stretched dough more resembled a fish net than parchment paper.

Finally from the oven comes this warm delicious Hungarian treat... 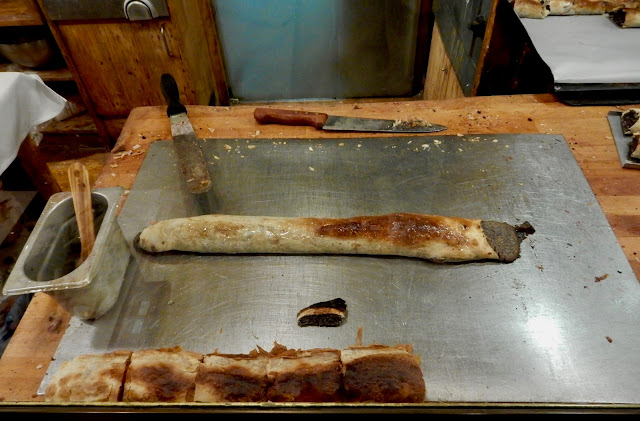 Stuffed with warm strudel and Kaffe, we walked it off by going to the Basilica of St. Stephens on the Pehst side of town.

On the way we found the brass policeman statue, where tradition says you must first rub his tummy... 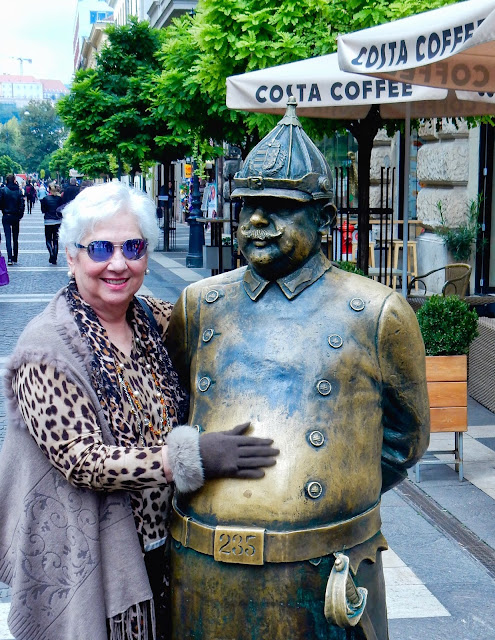 then give a twist to his moustache... 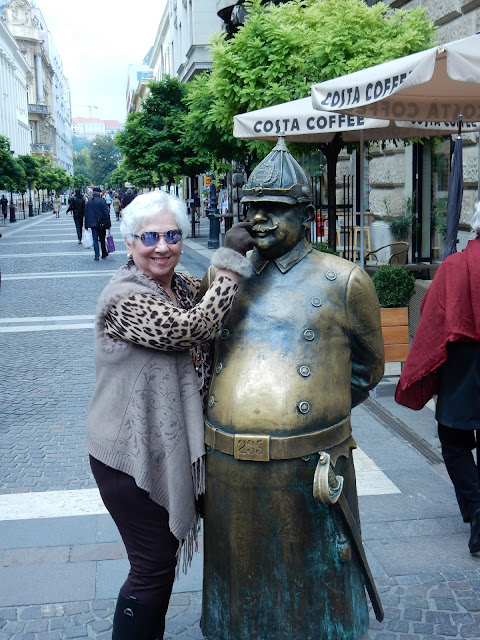 while making your wish.

Must work!  As you can see, the tummy is very well polished. 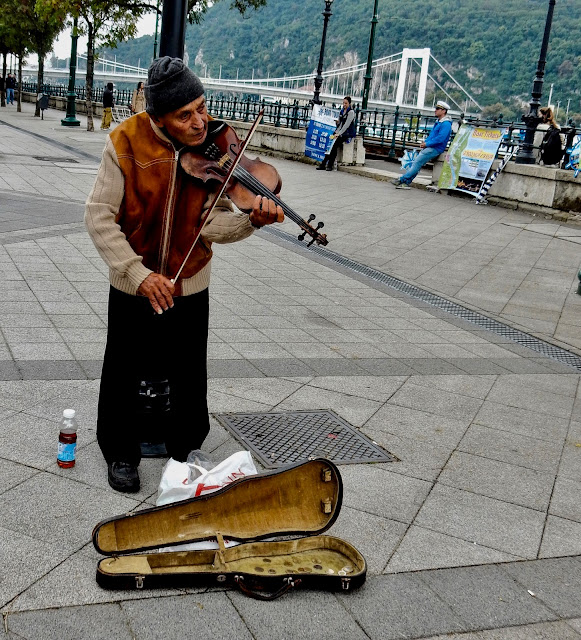 Tomorrow we go to Vienna.  More photos to follow.