The Iron Butt Association is a riding group dedicated to safe long distance motorcycling. The SaddleSore 1000 ride is their entry level ride to gain membership. One must ride 1000 miles in 24 hours or less. That may sound dangerous to many but, it does not require speeding nor being reckless. If you average 55 mph, you can ride the SS1000 in 18 hours.  This still allows time for gas stops, rest stops and meals if you stick to the interstate highways. It is an endurance event rather than a speed contest.

Several years ago I mapped out and rode an Iron Butt SaddleSore1000 all within the state of Texas. If I ride from home in Cypress, down to Harlingen in the valley, turn northwest riding up to Laredo then on up to Del Rio where I turn east, it is then a straight shot thru San Antonio back to Houston and Cypress.  A total of 1058 miles. 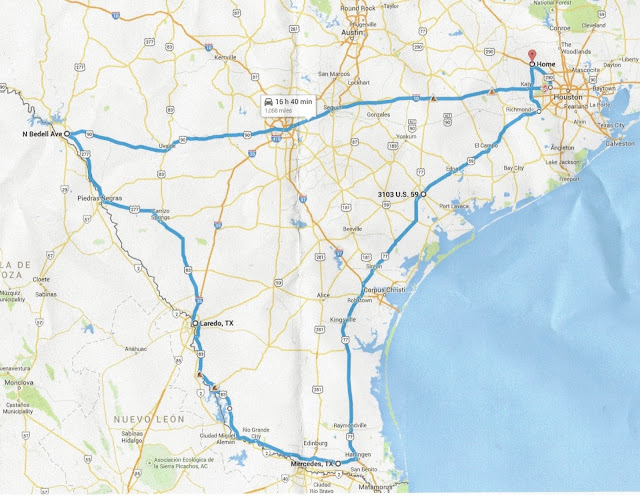 Since Da'mu the Goldwing and I both need a shake-down ride before we leave on our planned ride in a week or so, decided to once again ride the South Texas SS1000 route.

With the bike loaded and ready, we got a good nights rest.
Da'mu is pointed out, ready to roll whenever I can get up. 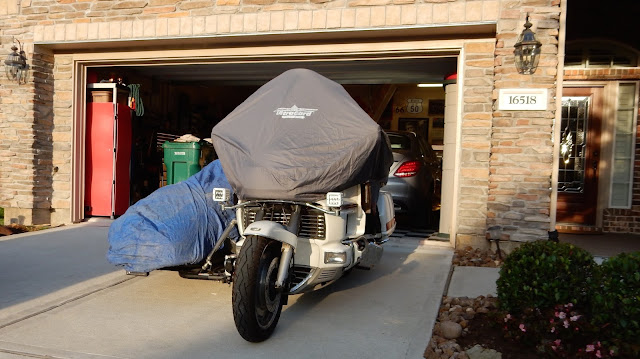 The first stop two miles from the house is to fill up the gas tanks and get a dated receipt. The first receipt starts the clock for the 24 hour ride.

There are not many people buying gas at 3:22 in the morning. Auto-pay gas pumps are welcome technology. 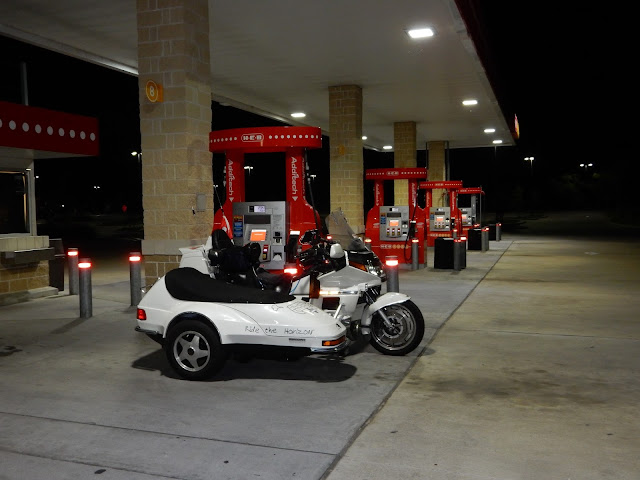 The second gas stop is in Refugio, half way to Harlingen, as the sun peeks over the horizon. 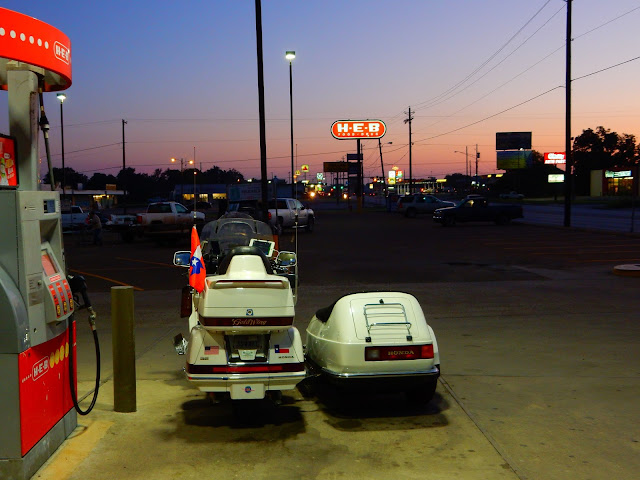 The Texas moon slowly disappears into the early morning mist as a new day dawns. 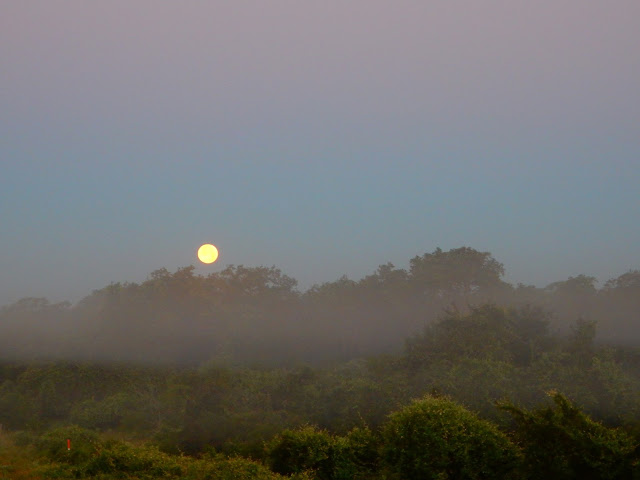 Not sure why so many flowers in the cemetery, but sure was colorful and caught my eye. 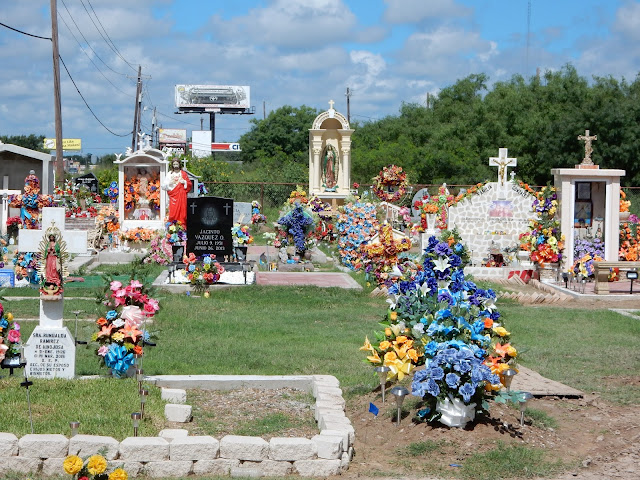 Rolling north along the border with Mexico we spot an old car for sale. 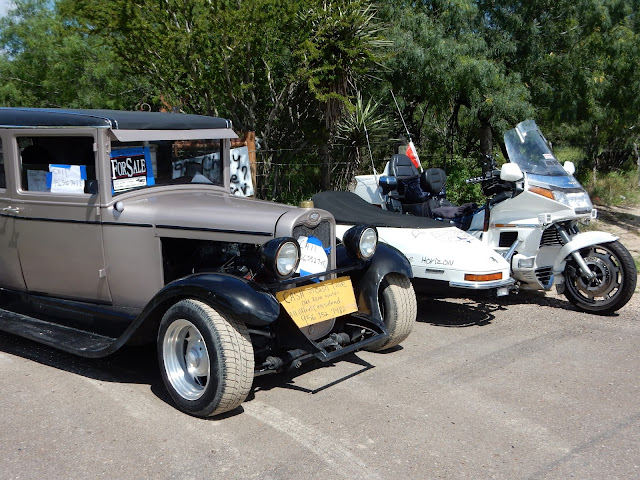 Sammy, the owner, comes out of the house hoping he has a buyer for his 1928 Chevrolet National Landau with a Corvette engine. 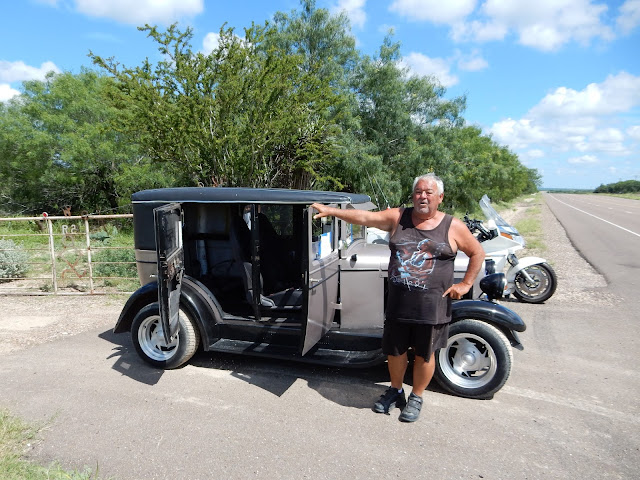 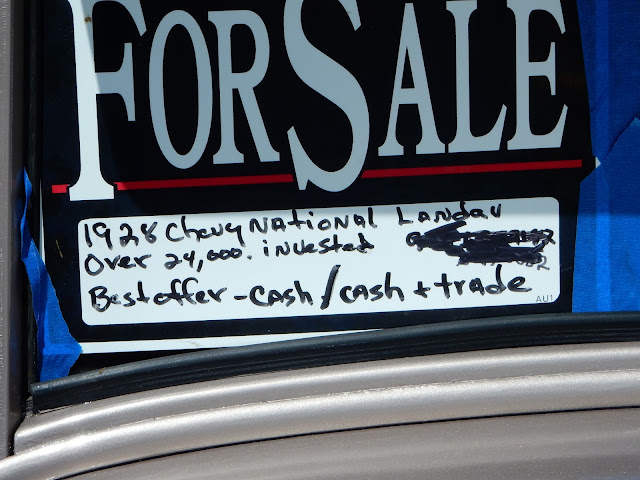 Inside is all original, but might need a little work yet. 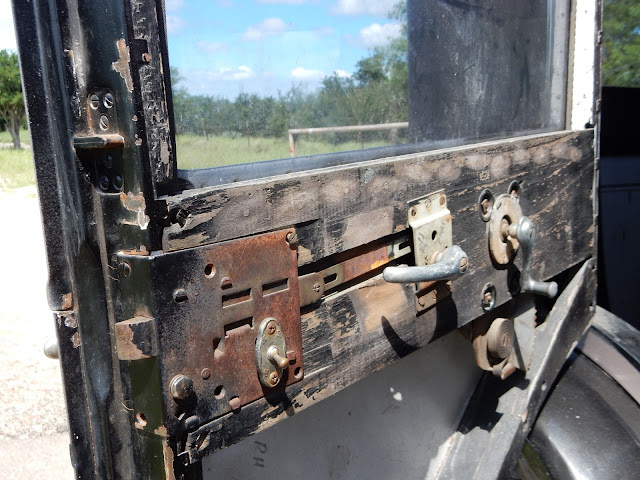 Fourth gas stop is in Laredo. Panic time! The receipt from the pump does not show the name of the city or state. When the gas receipts are submitted to the Iron Butt Association as part of the verification process, they are checked for location, time, date and how many gallons you bought to make sure you actually did the ride. The clerk inside the store doesn't understand why I need a duplicate receipt when I have the pump receipt in my hand. Finally the store manager prints a second receipt stating Laredo on it. Thank you!


Hightailing it through the scrub brush of South Texas, spotted an unusual looking whitetail deer off to the side. Turning around for a better look, realize it's an Oryx. They are not native to Texas or anywhere in the Americas. Someone has imported this for their ranch. 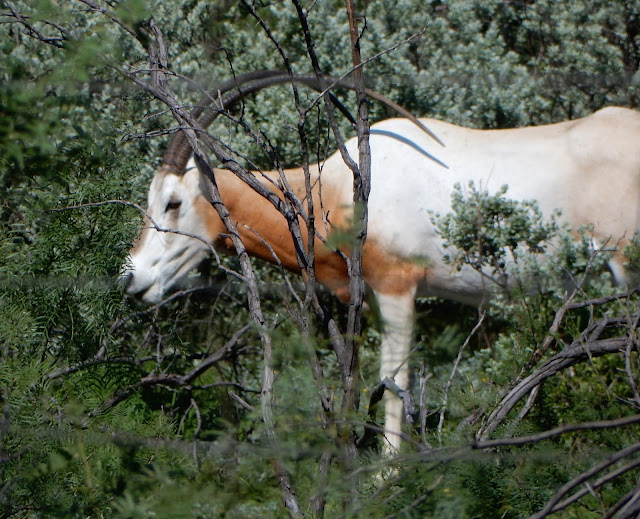 Stepping on the foot peg to remount the bike, the peg bends, sagging toward the pavement. Oops. Guess I've been eating too many pop tarts. For the rest of the trip, am careful to only step on the peg near the frame. Once back home, that will be an easy fix. 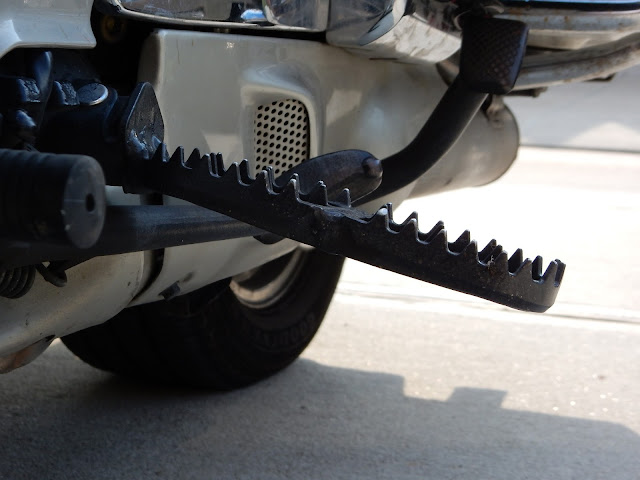 Fifth gas stop, Del Rio.  Second mechanical problem. The gas cap on the auxiliary gas tank won't come off. Stuck! Tugged, pulled, tapped and wiggled. Is not budging. Finally loosened the small vent cap on the red cap with a hex wrench.  The red cap then lifted off. Don't know if there was a vacuum inside the aux tank when I pumped gas out earlier, but the vent hose should prevent that. Unless the  vent hose is plugged. Or if heat caused the steel housing to expand enough to pinch the cap.  I thought the pump was working slower than normal on the last transfer. That could create a vacuum if the hose is clogged. Something else to fix once we are back home.

A motorcycle dragging along a sidecar is not a fuel efficient vehicle. With the main 6.5 gallon tank I can ride 130 miles before the low fuel light come on. The auxiliary gas tank gives me another 100 miles of range. If I can't fill the auxiliary tank or if I lose the ability to transfer fuel, we will have a problem. Out west the distances between gas stations can be considerable. Leaving Laredo we see a sign saying: Next Service, 60 miles. 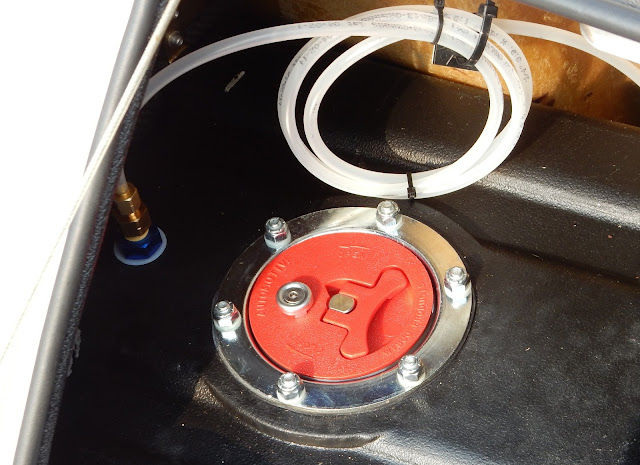 On the road between Laredo and Del Rio, we encountered frequent road repair and construction. The heavy oil trucks are tearing up roads that were never designed for the large amount of eighteen wheeler traffic. All caused by the South Texas oil boom.

From Laredo up through Carrizo Springs and on to Del Rio the road is two lane with no side road for detours. The highway department employs flagmen to control the flow. Which means one sits in the hot sun on hot pavement waiting for your turn to go. Seven different times we waited for flagman to let us through. The temperature in the Texas scrub brush hit a high of 100 today. Sunburn was a concern.

The switch for the driving lights is in the same housing as the switch for the auxiliary gas tank pump. Better check it as I will need the five gallons of gas I just put in there to get home. Hit the pump switch.... nothing! Houston we have a problem. 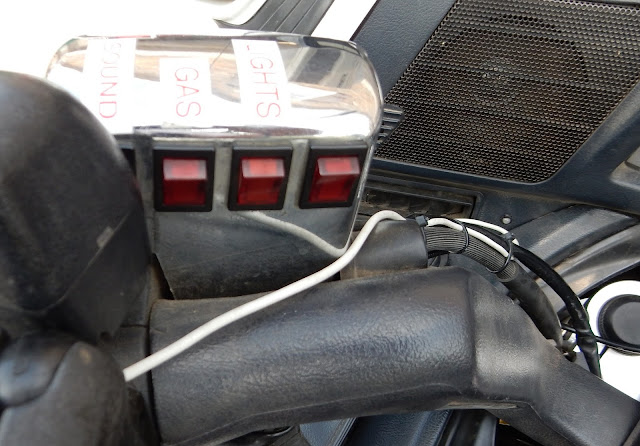 The switch gang on the left handlebar. The white wire is powering my iPhone in a handlebar mount.

Is pitch black, but can use a light to replace a fuse. However I can't see enough to start tracking down a shorted wire. Replacing a fuse without fixing the problem is just wasting fuses. Time to develop a back up plan.

Okay, we are 180 miles from home. The main tank is good for 130 miles. The five gallons in the aux tank, though good for another 100 miles, is useless because now we can't transfer it.

We'll ride another 80 miles, then start looking for a gas station to refill the main tank. That will get us home. It will add an extra stop and minutes to the ride. Checking the clock, we should be okay if nothing else happens.

Rolling along in the dark, am getting tired and the eyes are weary. Finally convince myself to pull off in a picnic area to rest. There are several eighteen wheels stopped with their motors idling in the darkness. Laying down on the concrete table, I set the alarm for a 22 minute power nap. Mosquitos are hungry so I pull the neck wrap over my face and jam my hands deep into the coat pockets. Thinking those eighteen wheelers must never shut off their engines, will never sleep with all this noise - when the alarm jolts me awake.

That short nap did the trick.  Back on the road we make our extra stop for gas in Columbus.

It is after midnight when we pull into the gas station where the ride started. Buying one gallon of gas in order to get the dated receipt, the ride clock officially stops at 12:35 AM. Twenty-one hours and thirteen minutes after we started. Hmm, the south Texas road construction really slowed me down. The last time I rode this route on two wheels, it took 17 hours.

Only two more miles to go to reach home, throw a cover over a bug-splattered Da'mu and sleep. Tomorrow we can think about how to resolve the electrical and mechanical issues.

Back home, a Da'mu sleeps late the next day. 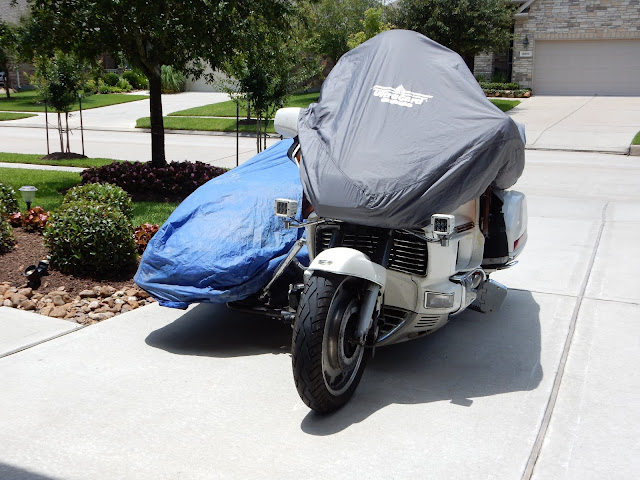 This week and next will be busy making adjustments, repairs, and packing. Da'mu and I needed this shakedown ride to expose any weaknesses in the bike or the rider before we start our long planned 48 state run. And if for nothing else than to celebrate my seventieth birthday.

Stay tuned for the 48 state ride.